As the biggest set of the Justice League subtheme, let’s see if it can do justice to its price point. Ba dum tssh!

Let us check out the minifigures first, which I think are the best parts of the set.

The first minifigure is Batman in his Tactical Suit. He has his usual cowl and cape, but his torso and leg printing are new. I do like this outfit, with the segmented panels and straps. The gold belt sticks out a little too much in my opinion, though. His head is double-sided but since the skin is printed on a black head it ends up having a darker skin tone. The face is double-sided – a stern expression on one side and a much angrier one on the other side. The band on the head is metallic silver now instead of the usual white. He looks pretty good on the whole but unfortunately the legs are not dual-molded which does spoil the look to some extent, though not as bad as the figure from 76086. He comes with a black batarang and a grappling hook.

The second minifigure is Superman. He is unchanged from the Batman vs Superman sets but LEGO somehow took away his dual-molded legs! Boooo! This makes him a downgrade from 76046 in my opinion. No accessories, but he does have a double-sided face with a smile on one side and laser eyes on the other.

Our third minifigure is Wonder Woman. She is unchanged from 76046 and is still incredibly impressive, with extensive side leg printing, arm printing, along with good torso, head, and leg printing. Her sword and shield are fitting accessories.

The fourth minifigure is Cyborg. He has super detailed printing which looks really, really awesome. I like all the little textures on his torso. His head and helmet are reused but I think they still work. He has a custom molded arm which has a metallic silver stud shooter attached at the end (or you can just put the stud on). However, neither solution looks that great in my opinion, and I don’t like the gap between his arm and body.

The fifth minifigure is a yellow Parademon. He also appears in 76085 and is very detailed for an army builder figure. However, I don’t really like the bright color scheme or the stud shooter. He has a pair of interchangeable wings which can give him narrower wings (as seen above) or wider wings.

The final minifigure is a green Parademon. I like his color scheme a bit more but it’s still a little bright in my opinion. He also appears in 76086. His printing is just as detailed as the other Parademon’s, and he also has two sets of wings which can give him a wider look or a narrower look. I don’t like his stud shooter.

There’s also a brick-built figure of Steppenwolf. I really like his detailed head mold, and it looks pretty amazing. His body is made out of mini ball joints but I’m not a fan of the overall look as his legs are kind of chunky while his hands look too skinny. I would’ve preferred a bigfig version, honestly.

At least he can be posed in a number of action poses, though. He also has a brick-built axe which looks reasonable but not entirely accurate.

Oh, and there’s the red MotherBox included in the set. It looks pretty good, with the textured bricks and printed tile.

I quite like the selection of minifigures in this set. Yes, they each have their own issues, but on the whole the minifigure selection is probably the strongest aspect of this set.

On to the builds!

The first build is the Batmobile itself. In the movie, Batman has apparently upgraded it with lots more cannons, and that is reflected in the LEGO model. When compared to its predecessor, there are a number of notable differences. There are now three stud shooters instead of two, and half of the canopy is gone, replaced with a brick-built replacement. Furthermore, the stud shooter shots are now translucent orange instead of metallic silver. The wheels at the front are now black instead of light grey, and there are guns and stickers on either side of the lower body. Strangely, the pop-up cannons present on the previous Batmobile are nowhere to be found. 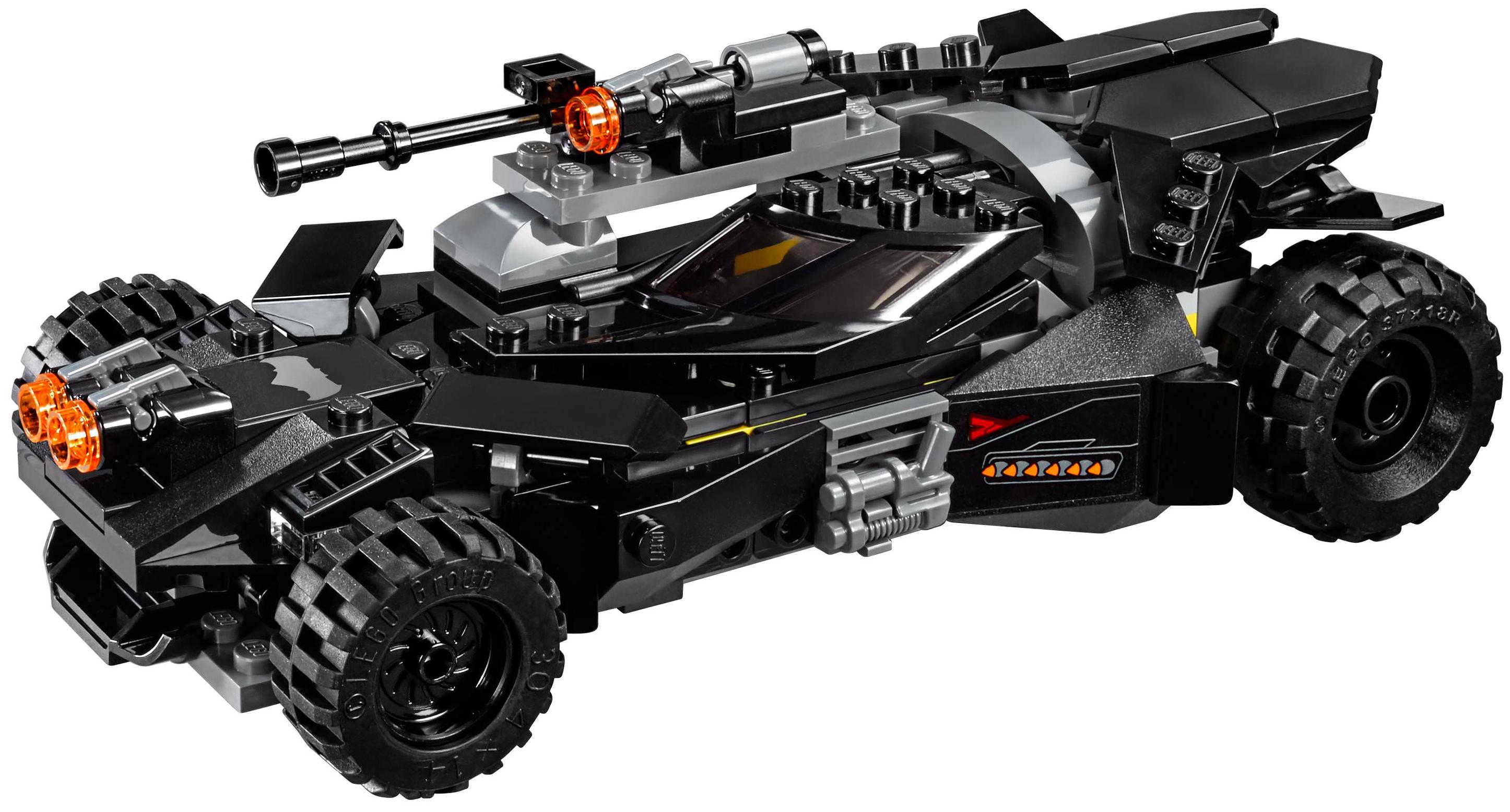 The side view also reveals that the rear fins have become much shorter, and are now represented by black Nexo tiles. The armored guards of the rear wheels are also gone. I feel these detract more than enhance the model but on the whole the Batmobile still looks good.

The cannon half of the Batmobile cockpit has a fair bit of dark grey in it, which I’m not a fan of. There’s a brick-built cannon on one side with a stud shooter on the other, but I’m sure you can modify it to remove the stud shooter if it bugs you.

You can open up the cockpit to reach the interior. However, it’s still relatively inaccessible…

Fortunately, you can detach the cannon section of the canopy too! Interestingly, it is attached with 1×3 jumper plates, which is a new element introduced in this set.

Batman practically lies down inside the Batmobile. He has a couple of stickered 1×4 yellow tiles on either side of him to represent controls, but they’re all the way down on the floor and I think a couple of plates underneath either one would’ve made it more realistic.

I think that, despite the changes from its predecessor, the Batmobile still looks good and menacing on the whole, and that’s good.

The other build in the set is the Flying Fox. It’s a large HQ for the heroes in the film, but unfortunately LEGO got it really inaccurate when compared to the movie version. The model has a bunch of plates and bricks built around a very sturdy Technic core. This makes the model much lighter than its size would suggest, which is good for kids but does feel slightly unsubstantial.

Some have criticized the Flying Fox for being a big black box but I think it does not look too bad, with the wings and flaps providing some variations to the overall shape. There are several stickers but I think they are used to good effect. However, three of the most noteworthy ones are the “WAYNE TECHNOLOGY” stickers on either side of the front, along with the main Bat logo on a 4×6 plate on top. The brick-built detail is pretty good too, with vents on the wings, cannons on top, vents on the back, and engine intakes on the front.

With the Batmobile removed, you can look at the inside of the Batmobile. The base is just a couple of Technic panels so you can’t attach figures with studs, though you can try to balance them. There are a couple of stickered inverted 2×2 tiles showing technical readouts, one of which has Steppenwolf, on either side. These add a bit of detail in an otherwise rather ugly area. 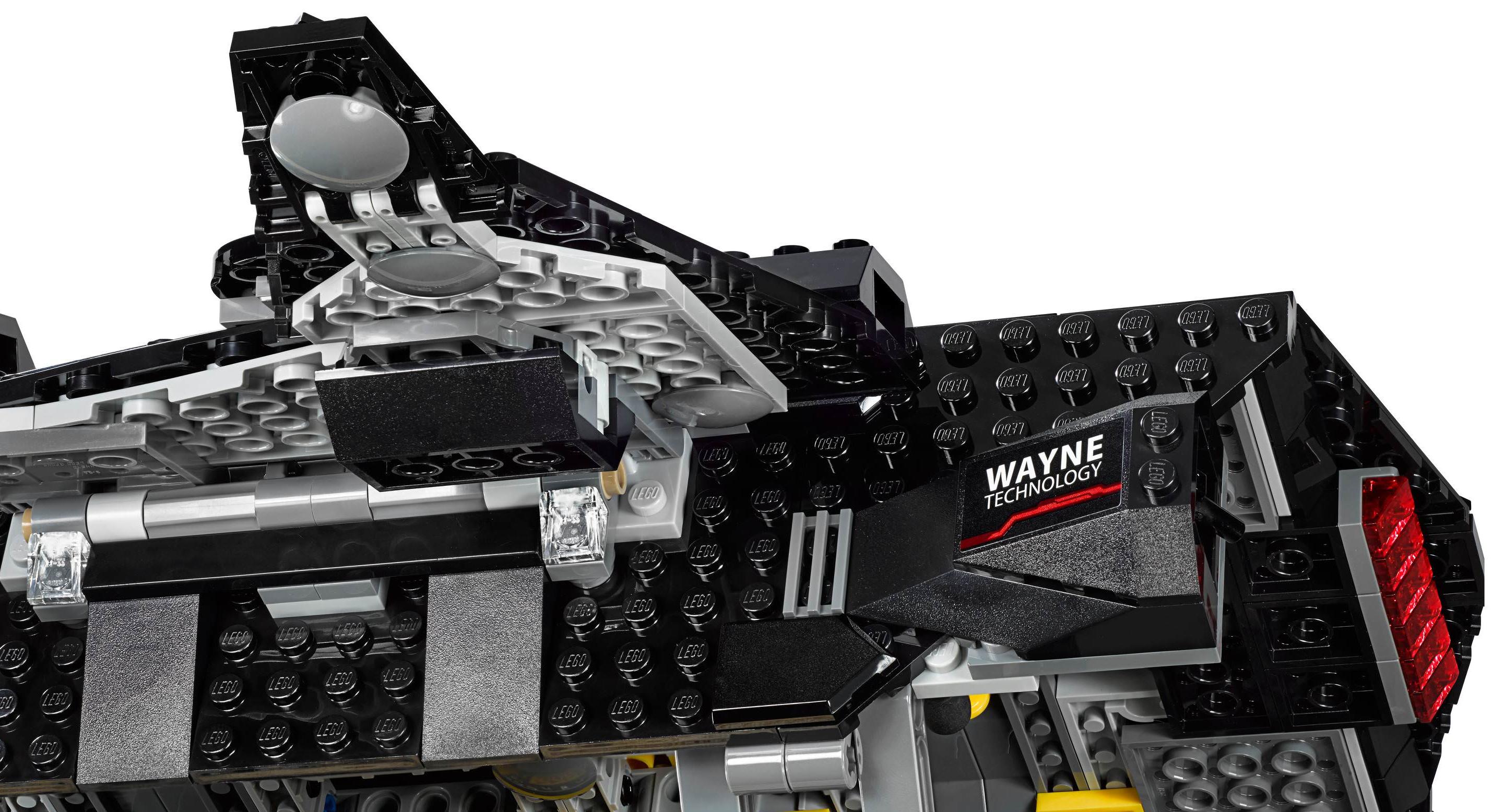 Under each wing is one spring-loaded shooter. These fire orange bolts and are reasonably well integrated. The wings themselves can wobble a little bit but are actually pretty secure. 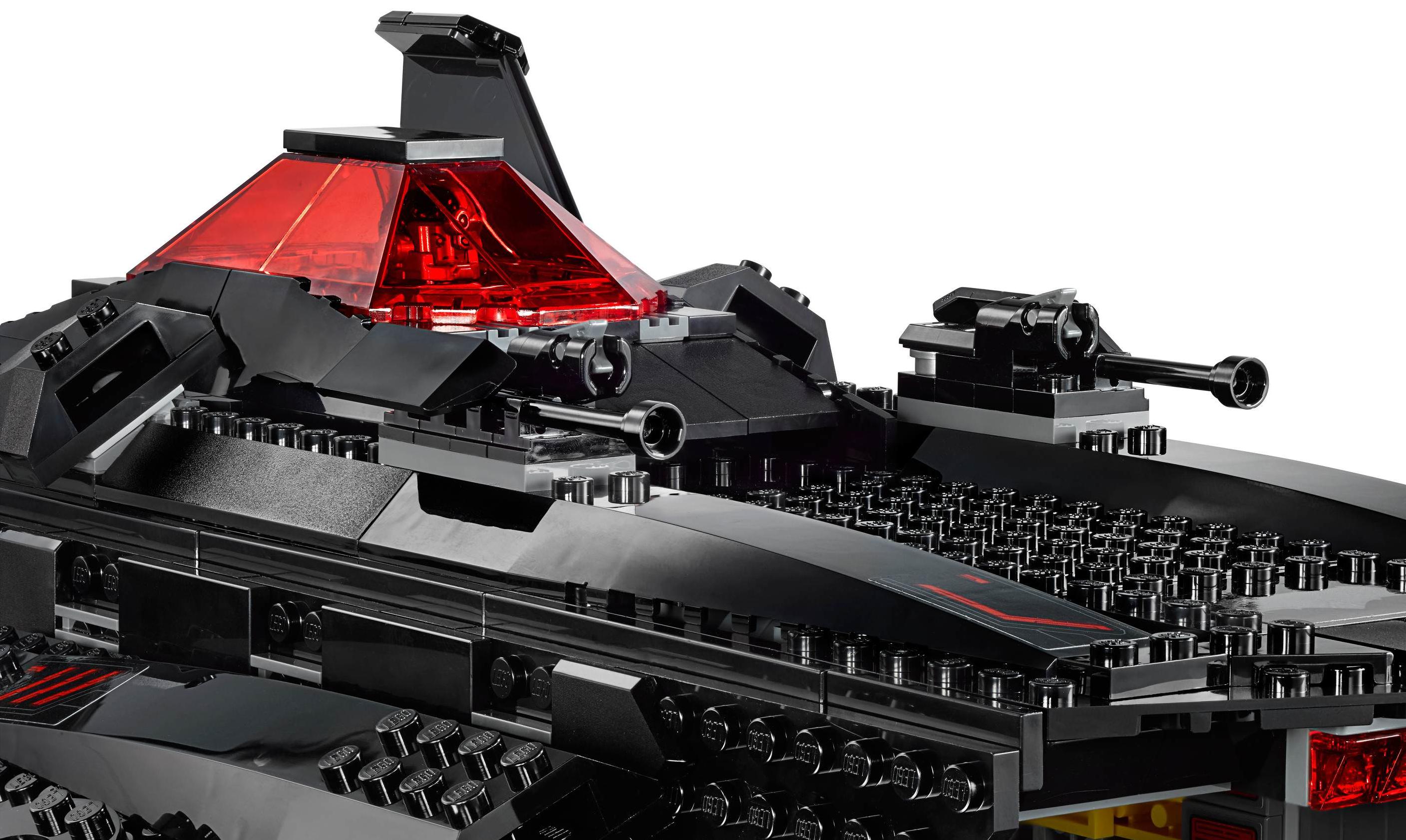 There are also a couple of stud shooters (next to brick-built cannons) in front of the cockpit. Like the Batmobile, they shoot of translucent orange studs.

The cockpit itself consists of two canopy elements put back to back. It is translucent red, matching the cockpit of the Knightcrawler.

The canopy can be detached. It is only attached using one stud but slots in securely. Inside, there is room for two people to sit back-to-back. Just like the Batmobile, the interior is yellow in color, and there are some stickered slopes representing consoles. Even though the image shows Batman and Cyborg here, I usually put Cyborg by himself up here and Batman in the Batmobile.

Thanks for reading! Let me know your thoughts in a comment below! 🙂