The set includes four minifigures: two protagonists, one civilian, and one antagonist.

The two protagonists are Kai and Iron Dragon/Misako (yeah I haven’t watched the film but this is painfully obvious). Kai is the same as ever, also appearing in sets like 70608 Master Falls and 70617 Temple of the Ultimate Ultimate Weapon. He’s fine but I wish someone like Jay or Cole was included. Heck, even Zane or Nya would’ve been better.
The other figure is Misako. I like her gunmetal grey outfit with the new quiver mold. Her dual-molded hair/helmet looks great too, but her head looks horrible! LEGO’s official images of her head look fine but in reality the yellow printing is horribly light which looks terrible. This completely ruins an otherwise good minifigure and I wish LEGO either used a regular yellow head or printed more yellow.

The other two minifigures are Ray and a Shark Army Thug.
A LEGO Ninjago character in the TV show called Ray is Kai’s father, but I think his name here is just an Easter egg. He has a new torso print, but his head, hat, and legs are all old. Still looks okay though.
The Shark Army Thug is whatever. Kind of like the sleeveless look on him though.

On the whole, I think this minifigure selection is pretty underwhelming. Kai and the Shark Army Thug are whatever, Ray looks fine but still looks very similar to many other NINJAGO Movie civilians, and Iron Dragon looks good but her face ruins her minifigure. 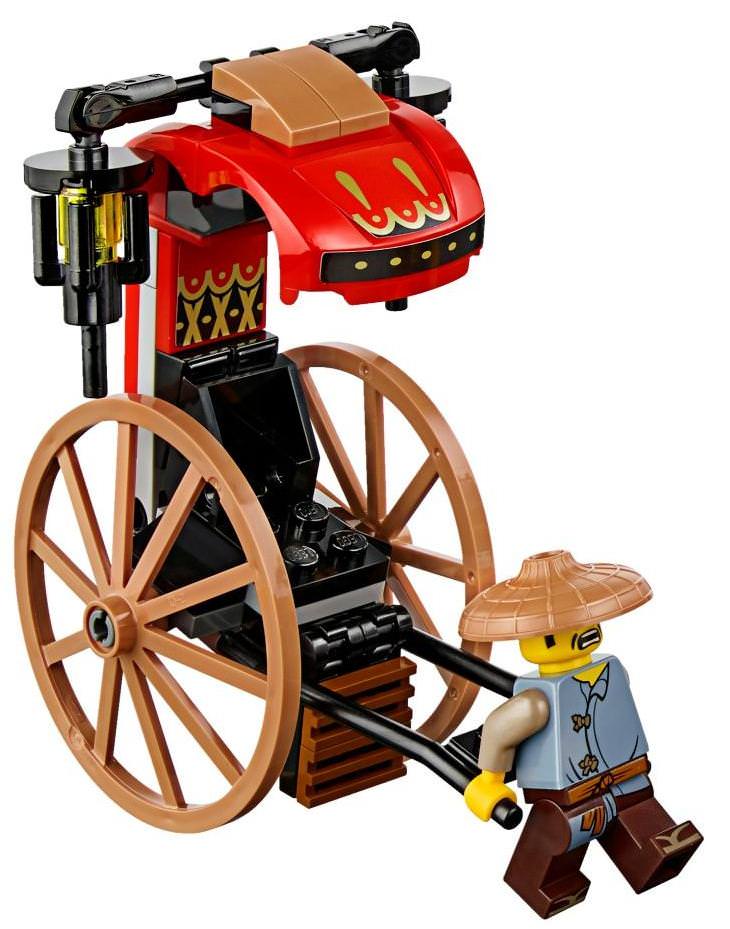 On to the builds! Like a lot of LEGO Cinematic Universe sets at this price point, there are two models included. The first one, and less interesting one in my opinion, is a rickshaw for Ray. It has some nice details like a seat for one minifigure, a fold-down ladder for minifigures which functions as a stand, along with two car fronts used on top. 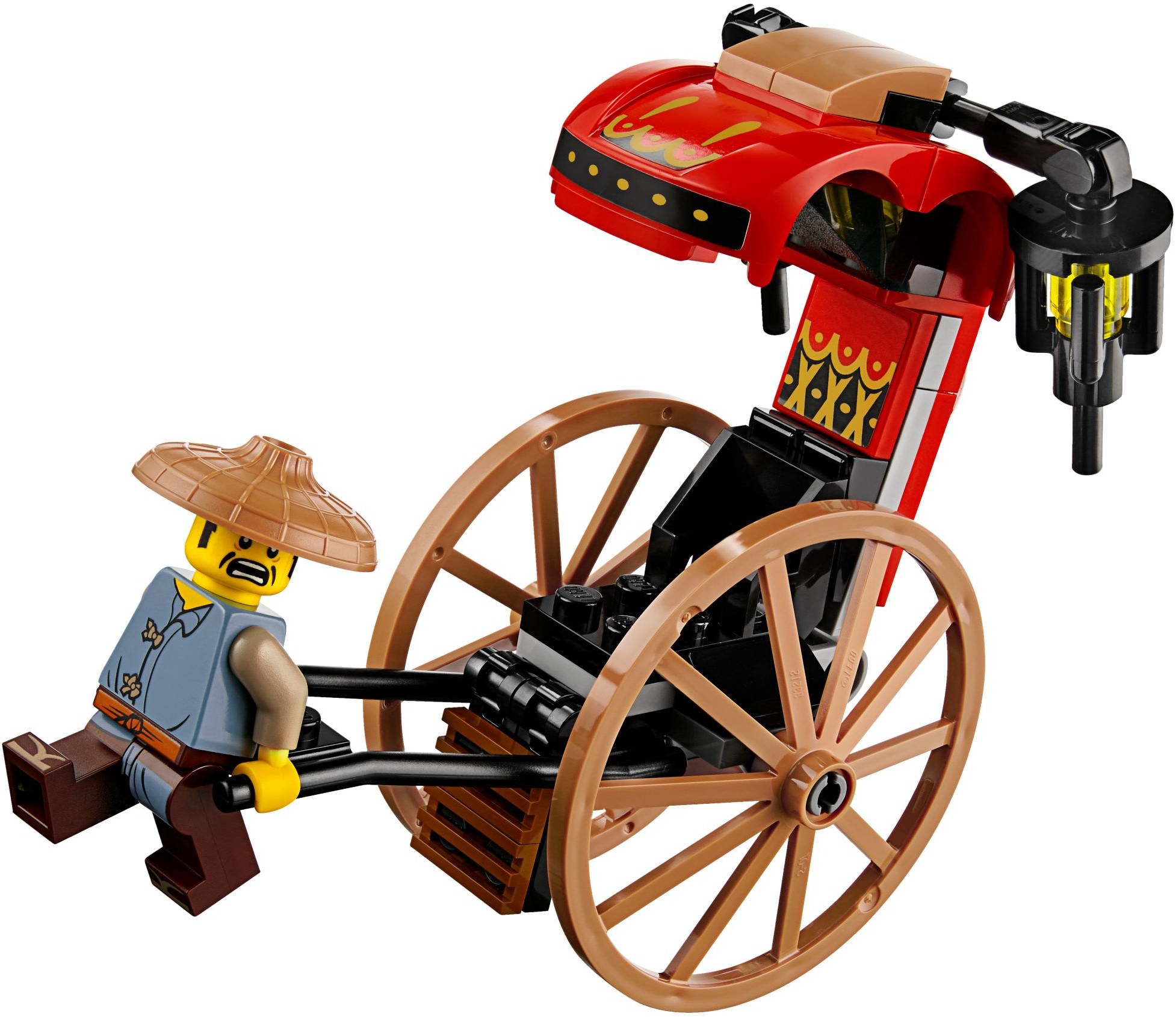 Ray can pull it as he runs from the Shark Army but ultimately it’s too oversized and looks weird in my opinion. 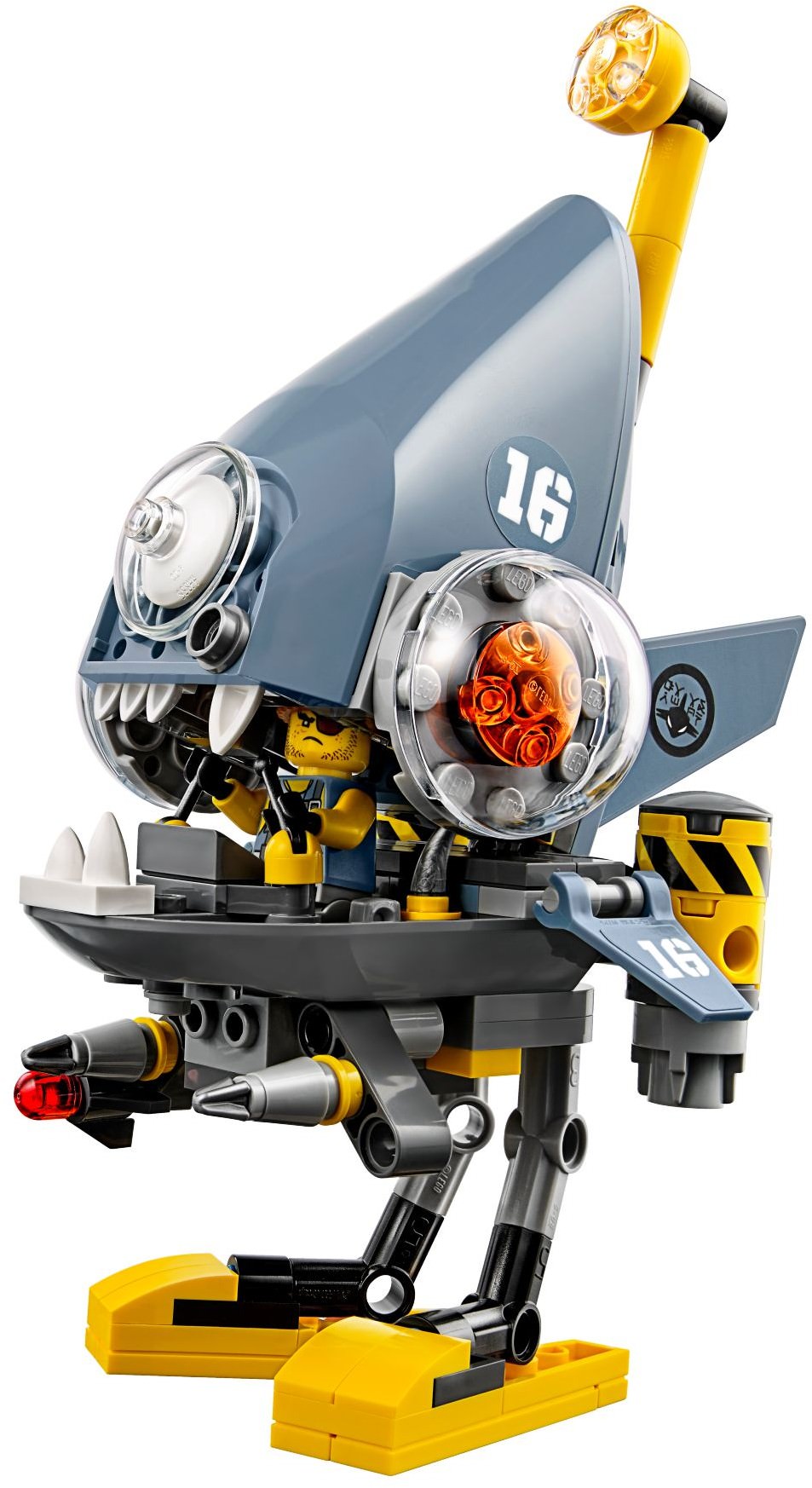 The other build, which I prefer, is the Pirahna mech. It very cleverly reuses a recolored LEGO aeroplane rear mold as the main part of its mouth! Some people might complain at the use of this large single mold instead of a smaller, more complex build, but I always love it so much when LEGO reuses specialized elements for completely different uses so I really like its usage here. The legs can be turned side-to-side and the flipper-like yellow feet are interestingly built upside down. I like the details like the flaps on the side and back, the teeth, and the two huge eyes. The periscope from behind the head is fun and provides a plausible way for the pilot to look outside when the mouth is fully closed. 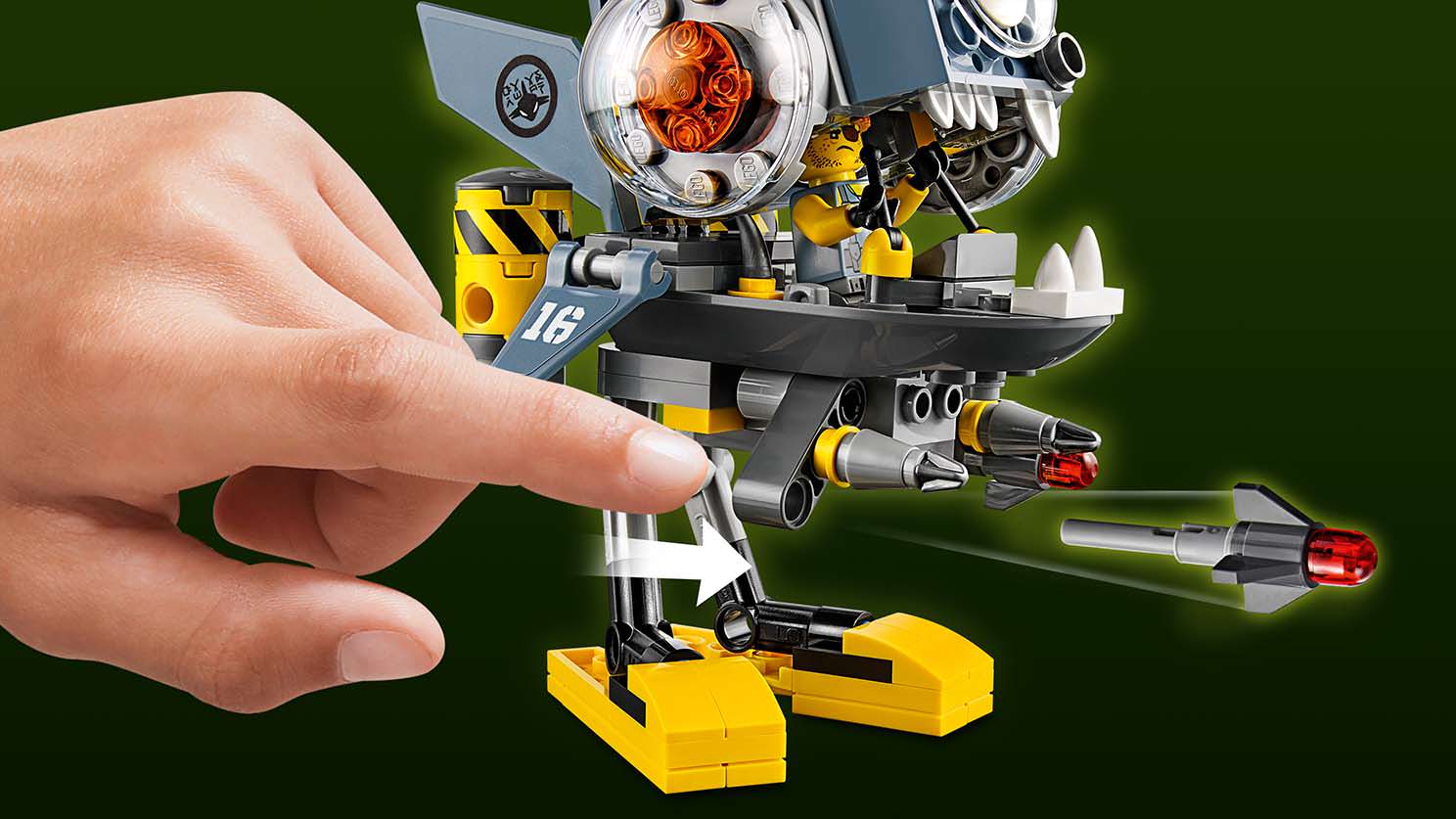 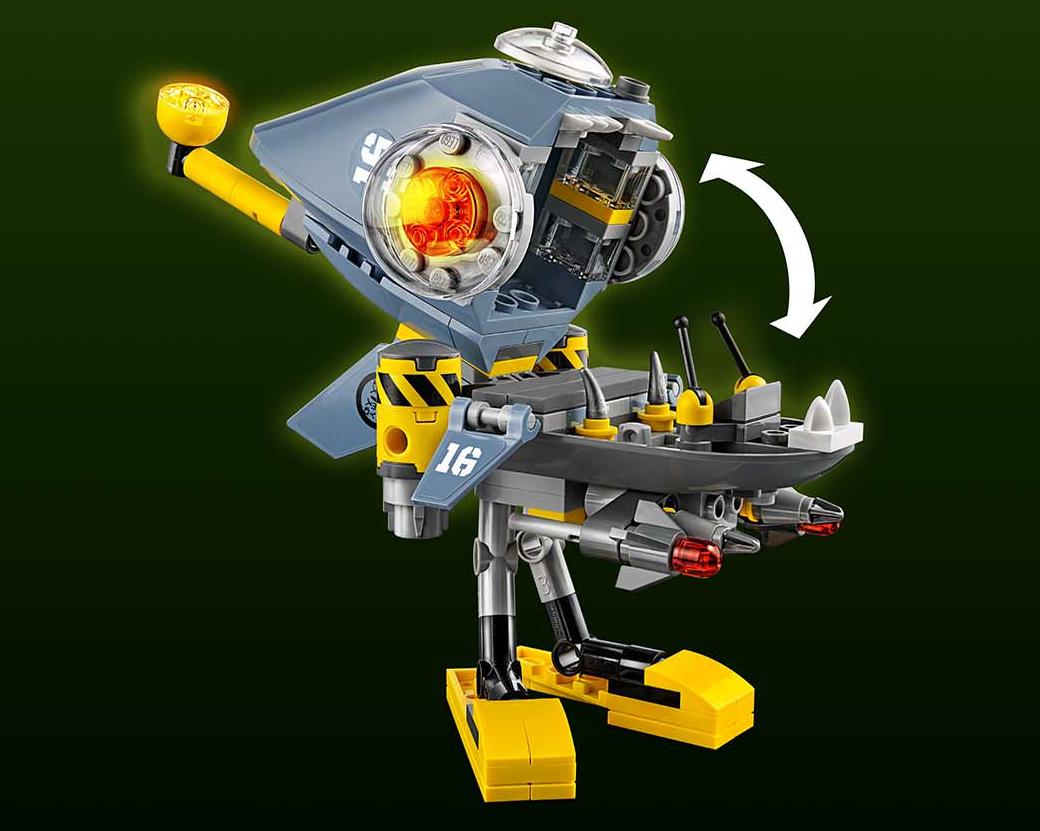 The cockpit can be opened up. It is connected with two click hinges so is pretty secure. Inside are a couple of decorative spikes, two joysticks, and one printed 1×2 control slope for the operator. It’s nothing amazing but it functions fine. 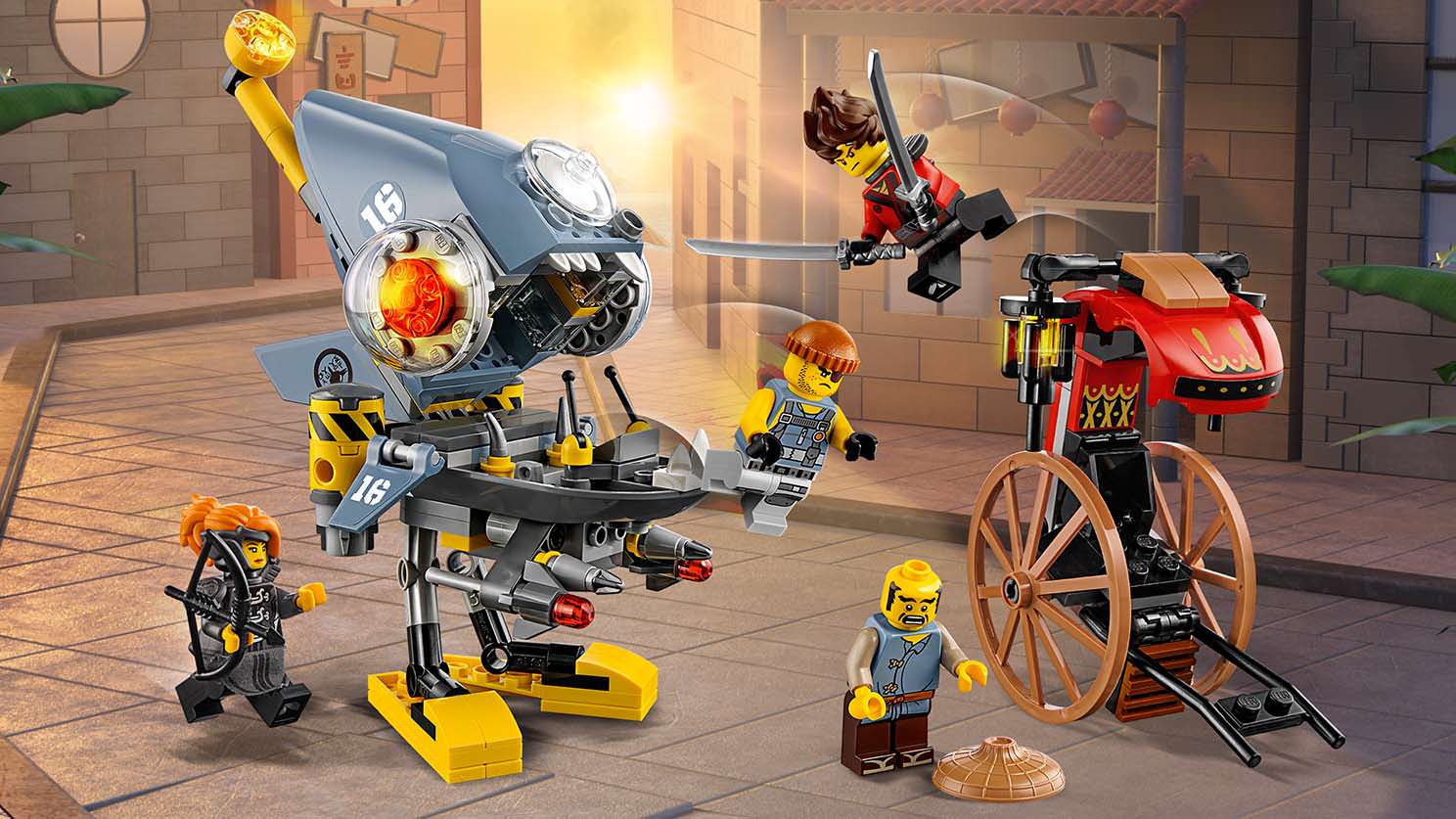 That concludes my look at 70629 Pirahna Attack! Honestly… I am kind of underwhelmed. The builds are okay – Pirahna mech is cute but rickshaw is too oversized – and minifigure selection could definitely have been better. The price is mediocre and playability is too. You can afford to pass on this if you like

Thanks for reading! Let me know your thoughts in a comment below 🙂