The first two minifigures are Captain America and Bucky Barnes.

Here are the last three (and a bit) minifigures: Scarlet Witch, an Ant-Man microfigure, Iron Man, and War Machine.

This minifigure selection is really strong. It’s probably going to be one of the main attractions for this set. The only thing I’m not a fan of is how it’s a bit lopsided between Team Cap and Team Iron Man – Team Cap has 5 members while Team Iron Man only has 2. Oh well, I’m Team Cap anyway 😀 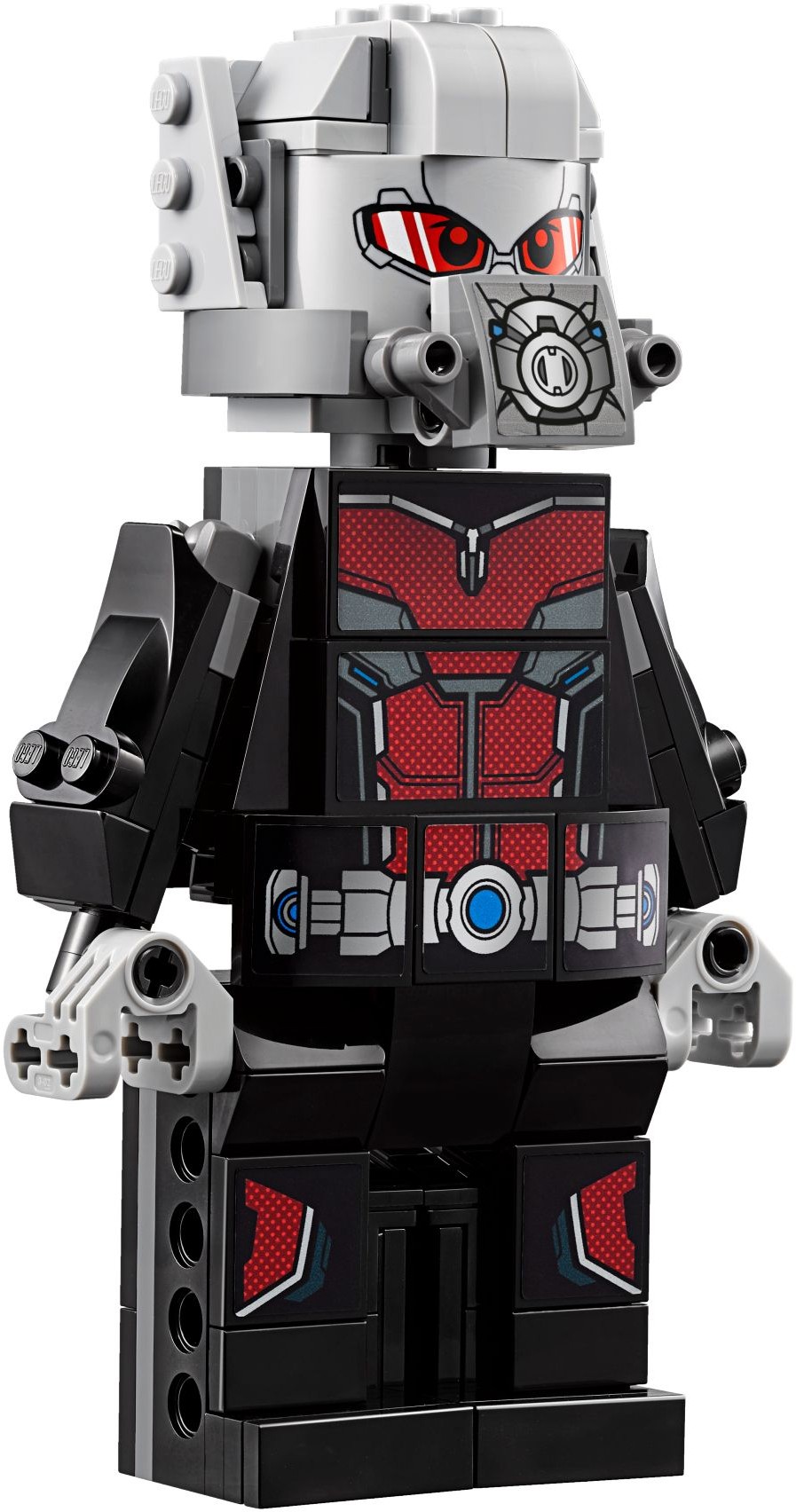 The first build in the set is the Giant Man build. He’s basically a scaled-up Ant-Man minifigure, and he looks phenomenal. This was a new concept for LEGO at the time and has only been used elsewhere on Ares from 76075 Wonder Woman Warrior Battle. Unfortunately most of the detailing on him are stickers (except for his face, that is a print) but they do look pretty good. The only complaints I have are the Technic holes on the sides of the legs – those are a little ugly. 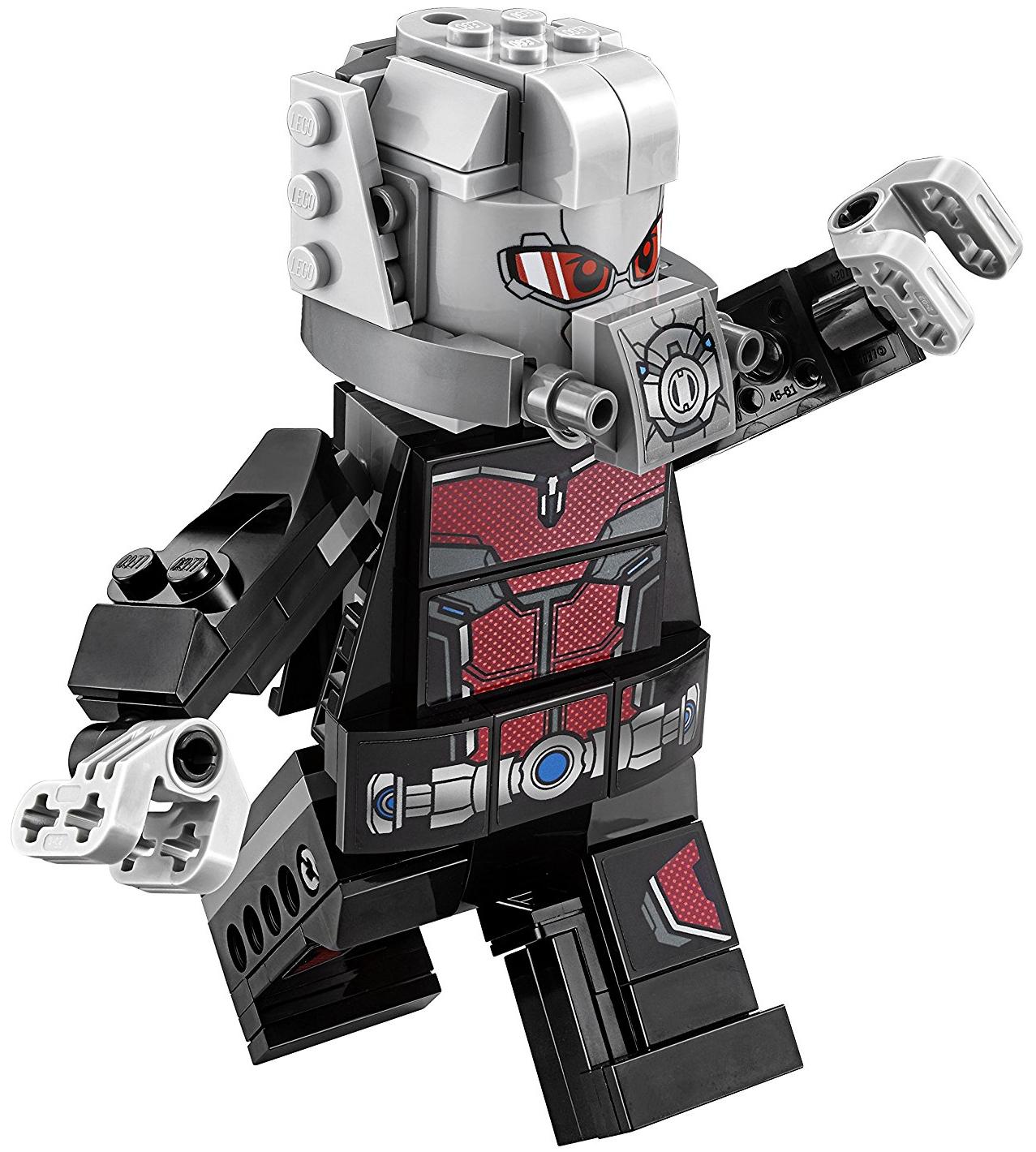 Giant-Man is slightly more poseable than a regular minifigure. The legs can move back and forth like a normal minifigure, and the head can turn side-to-side, the mask in front of his face can hinge forward to show his mouth, and his hands are on mini ball joints so they can be posed as you like. 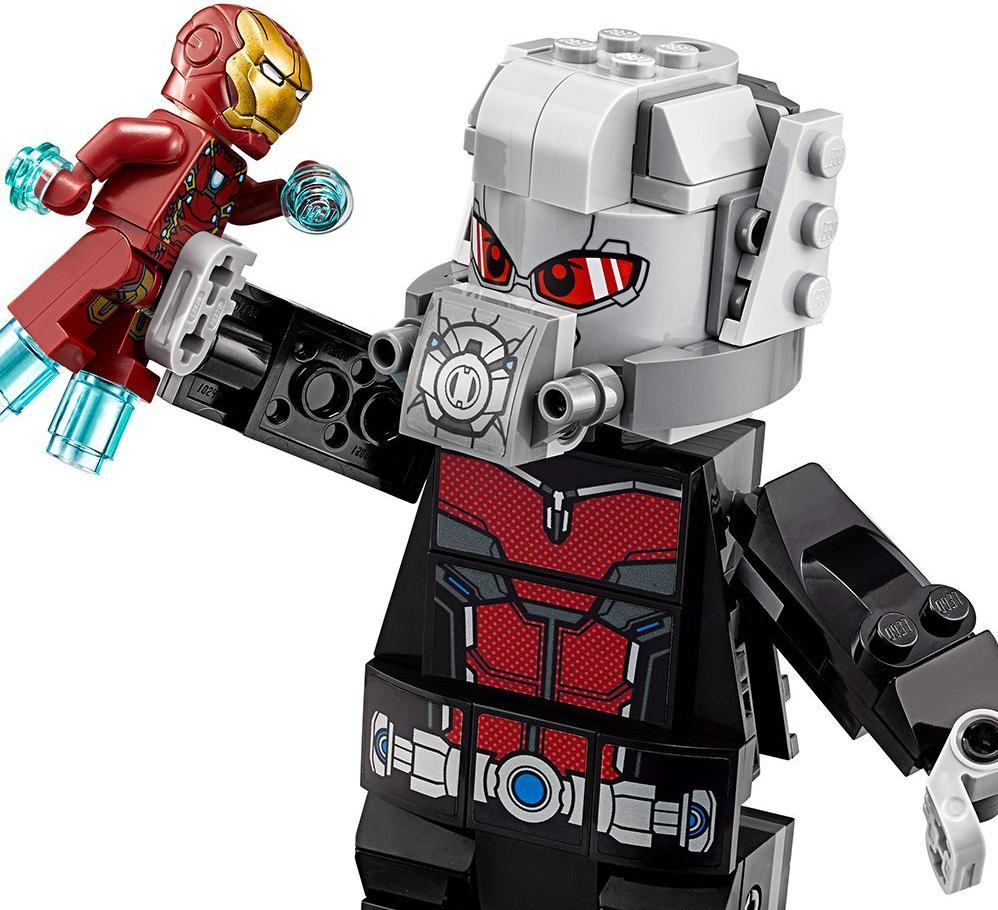 You can also use Giant-Man’s hands to grab onto minifigures, like the scene where Giant Man grabs War Machine. 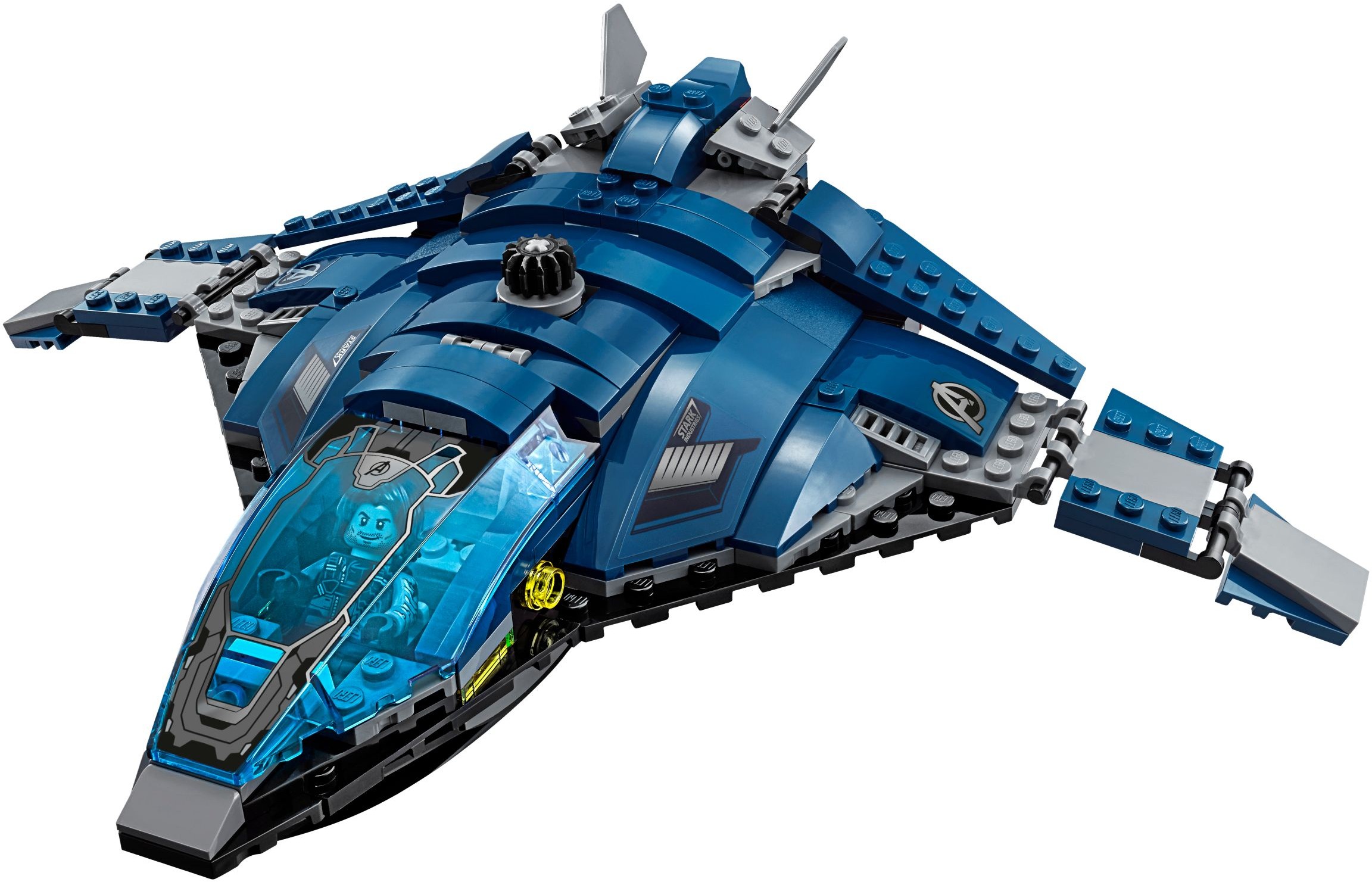 The second build is a Quinjet, and gosh this has been scaled down so much. It looks like a baby compared to the previous two. That said, I do like its dark blue and dark grey color scheme. The translucent dark blue cockpit glass looks good too, but that sticker was a pain to apply. 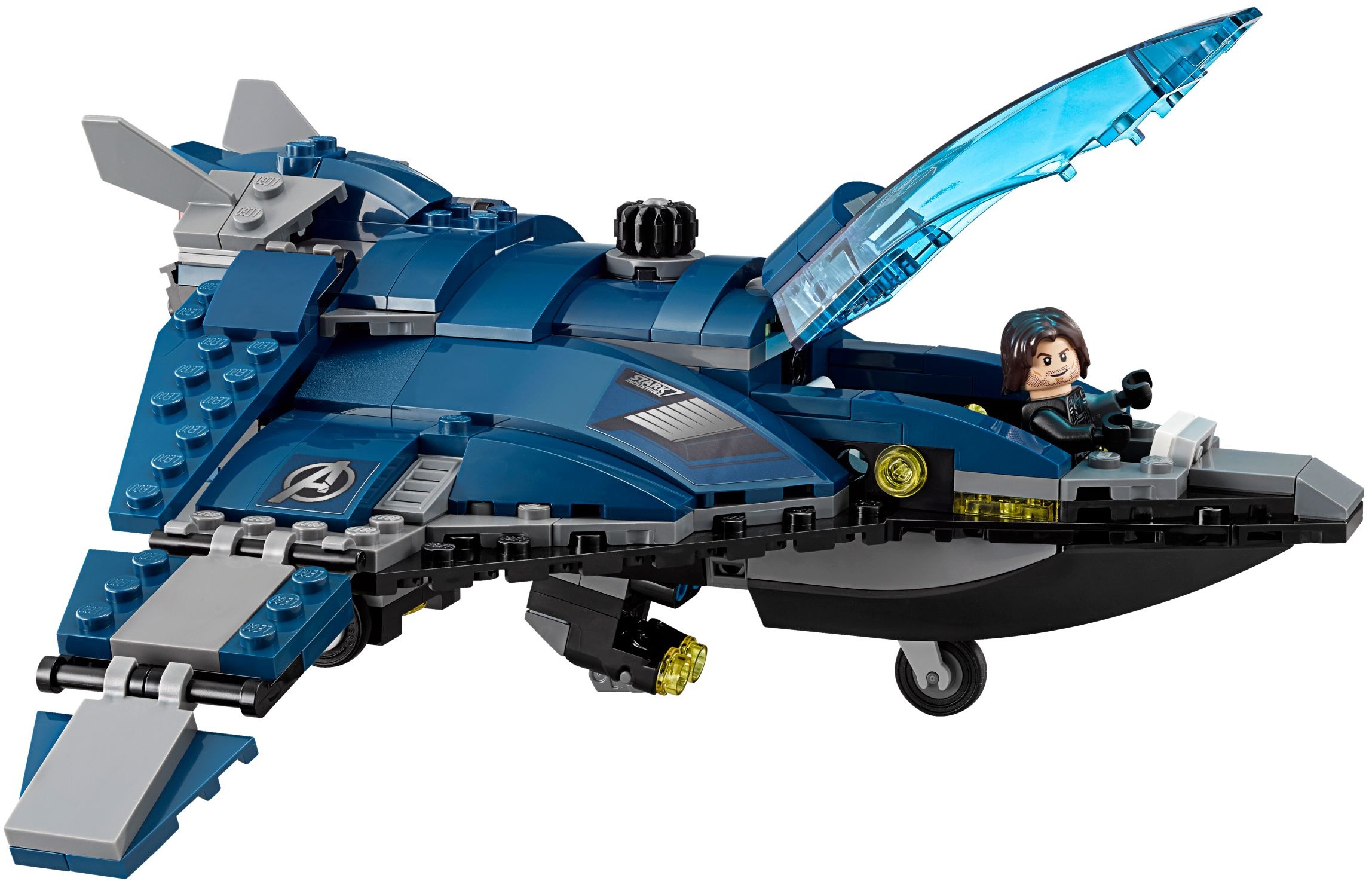 The cockpit glass can be opened and two minifigures can be put inside the cockpit, though it’s a bit of a squeeze. 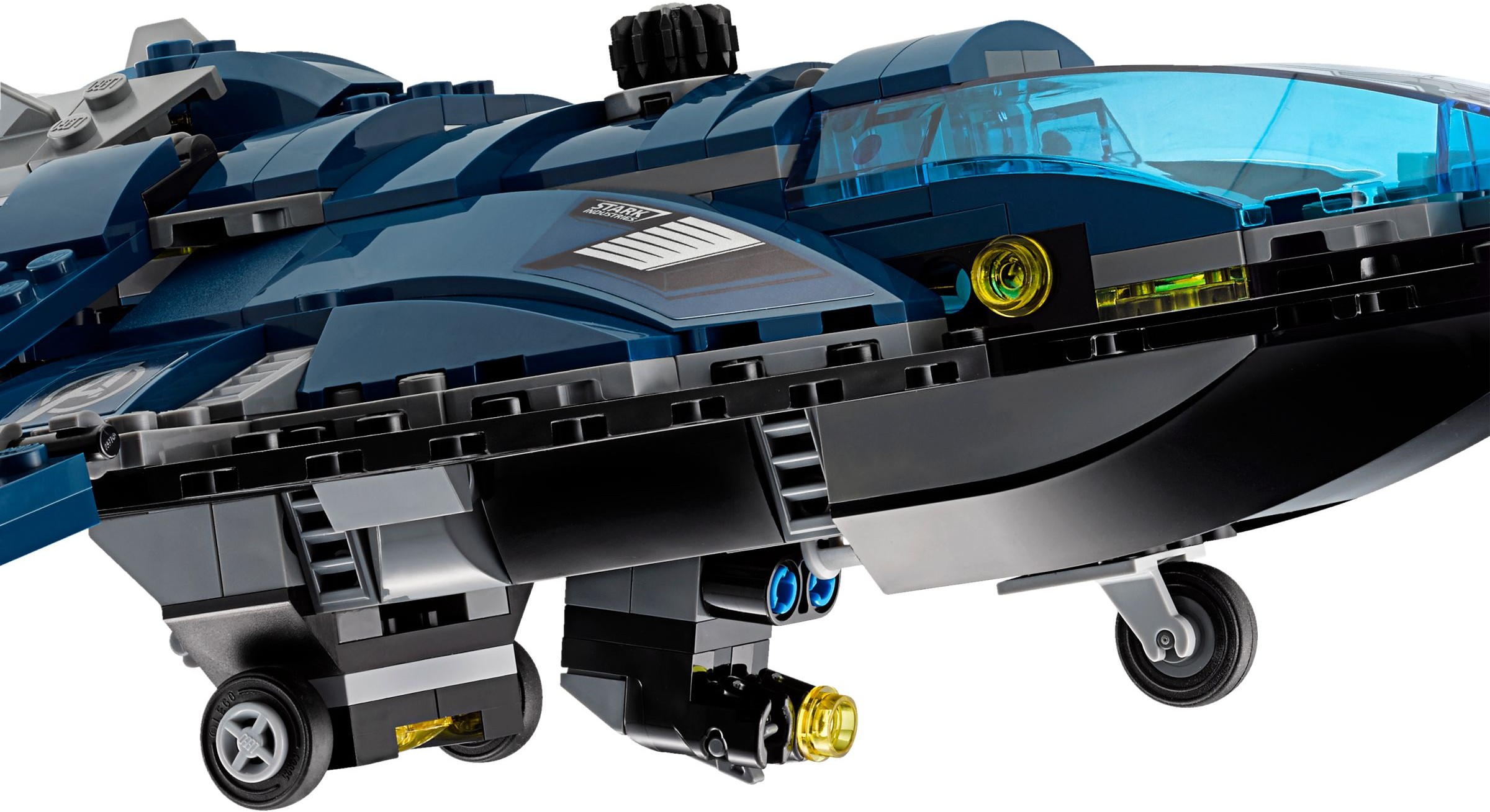 There’s a gear on the top of the Quinjet which, when turned, swings out a pair of stud shooters from the belly of the ship. This takes up most of the central section and the knob is a bit ugly but I suppose it’s a decent play feature considering the limited space. 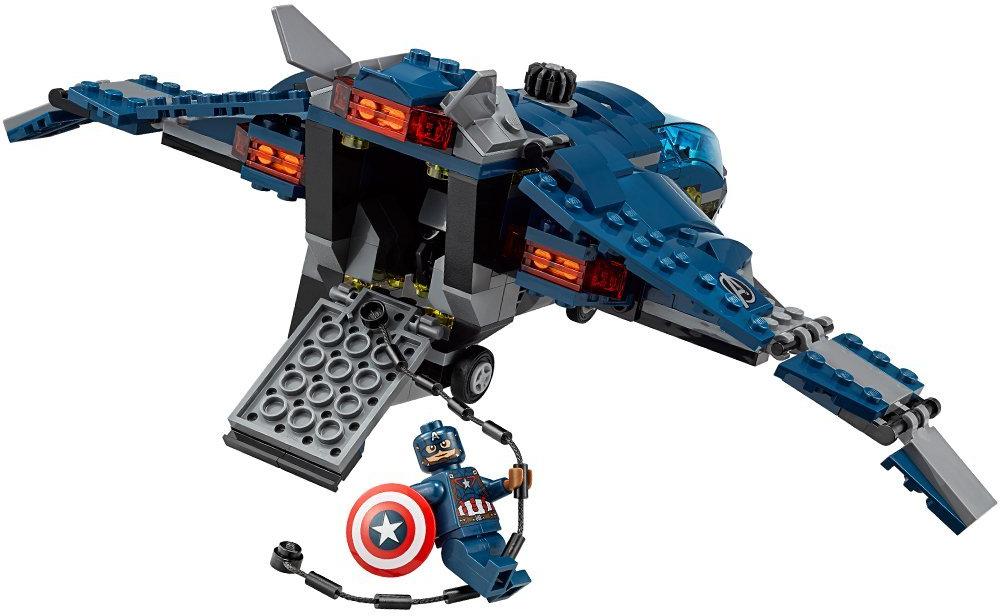 The rear cargo hold has taken the biggest hit due to the downscaling, and is now only two studs deep. One minifigure can be seated inside and, when the rear door is opened, the minifigure can be deployed on a string, like Captain America in the picture above. 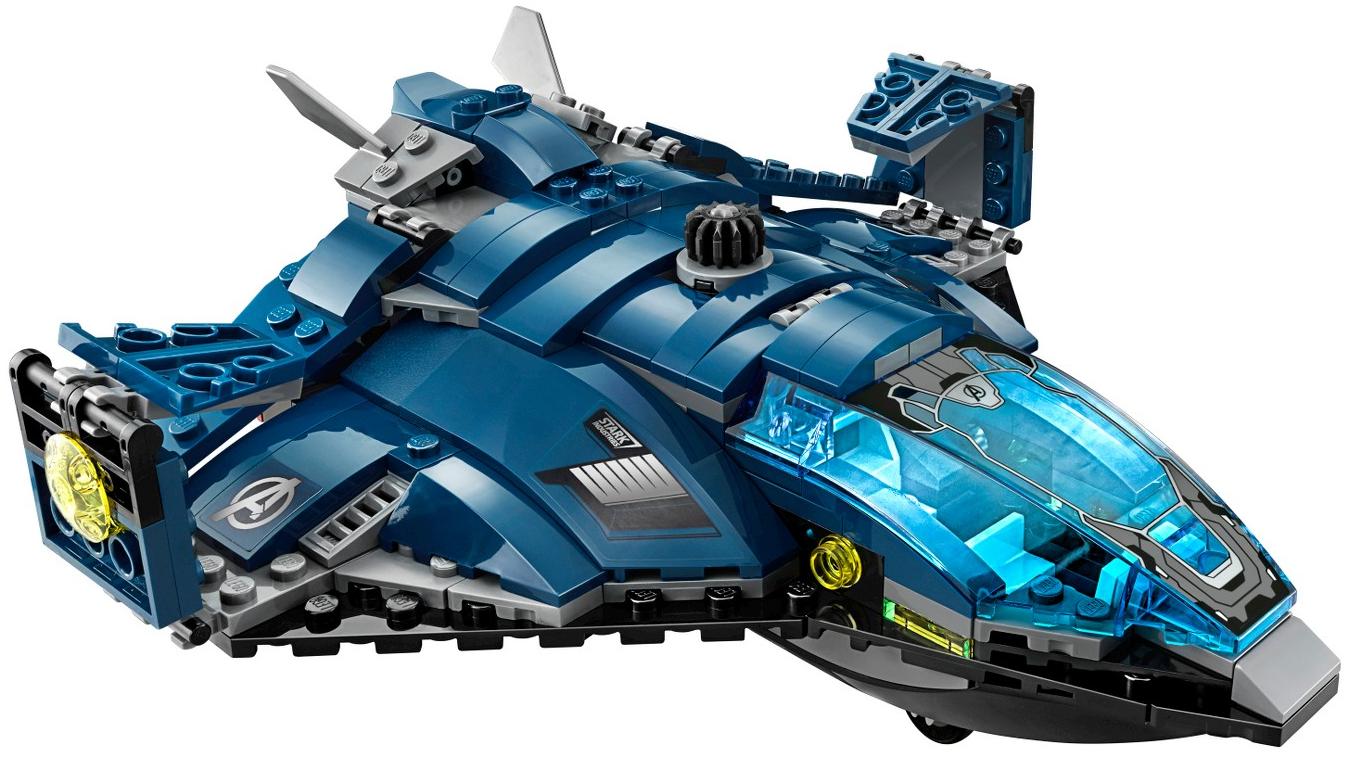 The wings of this Quinjet are the most flexible Quinjet wings yet, as there are two points of articulation which are both regular clips. They can be folded in for storage.

On the whole, while this Quinjet gets some things right (like the color scheme), its small size ultimately compromises the quality of the whole model. 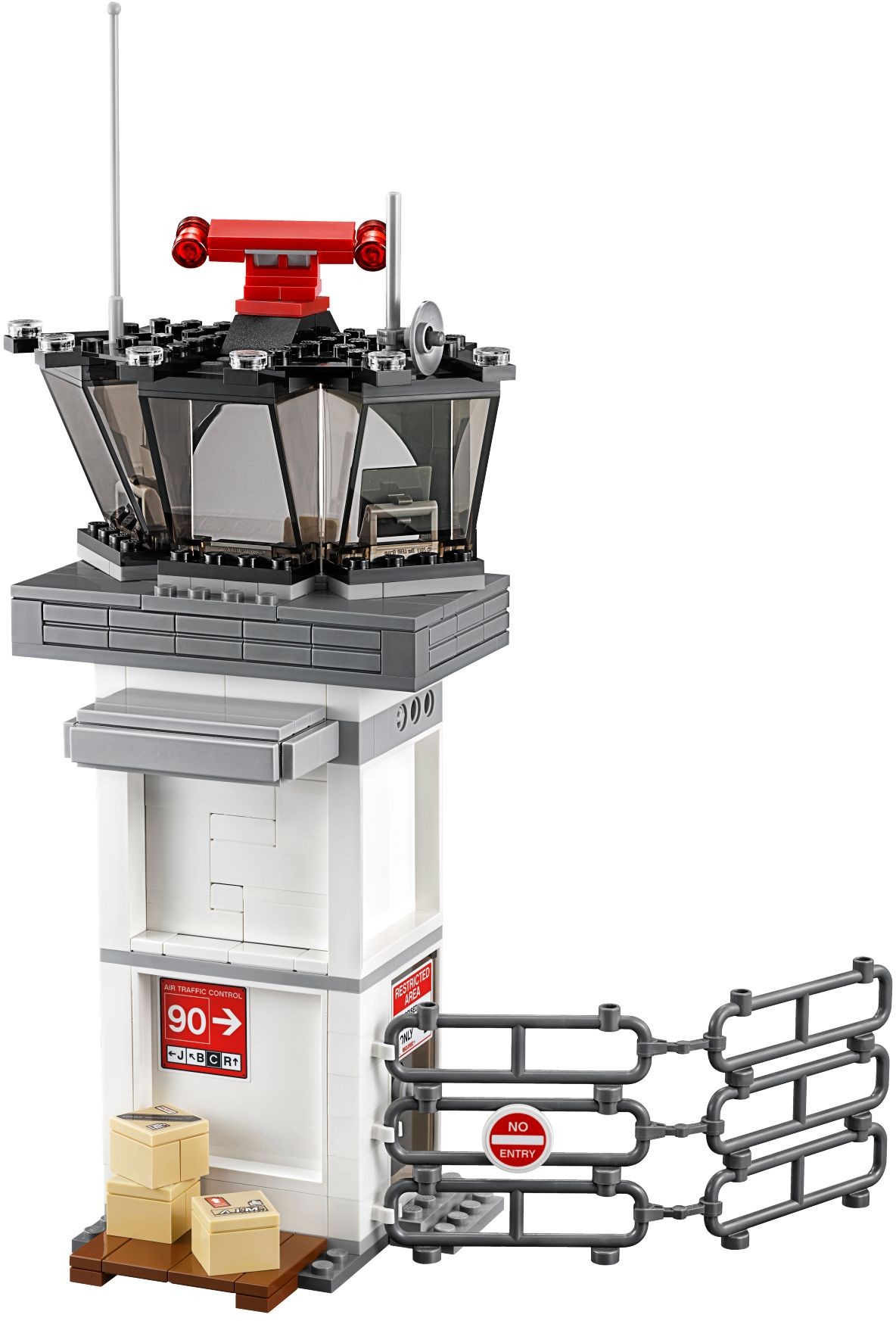 The third build is an Airport Control Tower. It’s really just meant to function as a scenery build to show that the superheroes are at an airport. The tower itself looks quite okay – I like the three windscreens at the top – and there’s a fence at the side with a “No Entry” sticker to expand the size of the build. 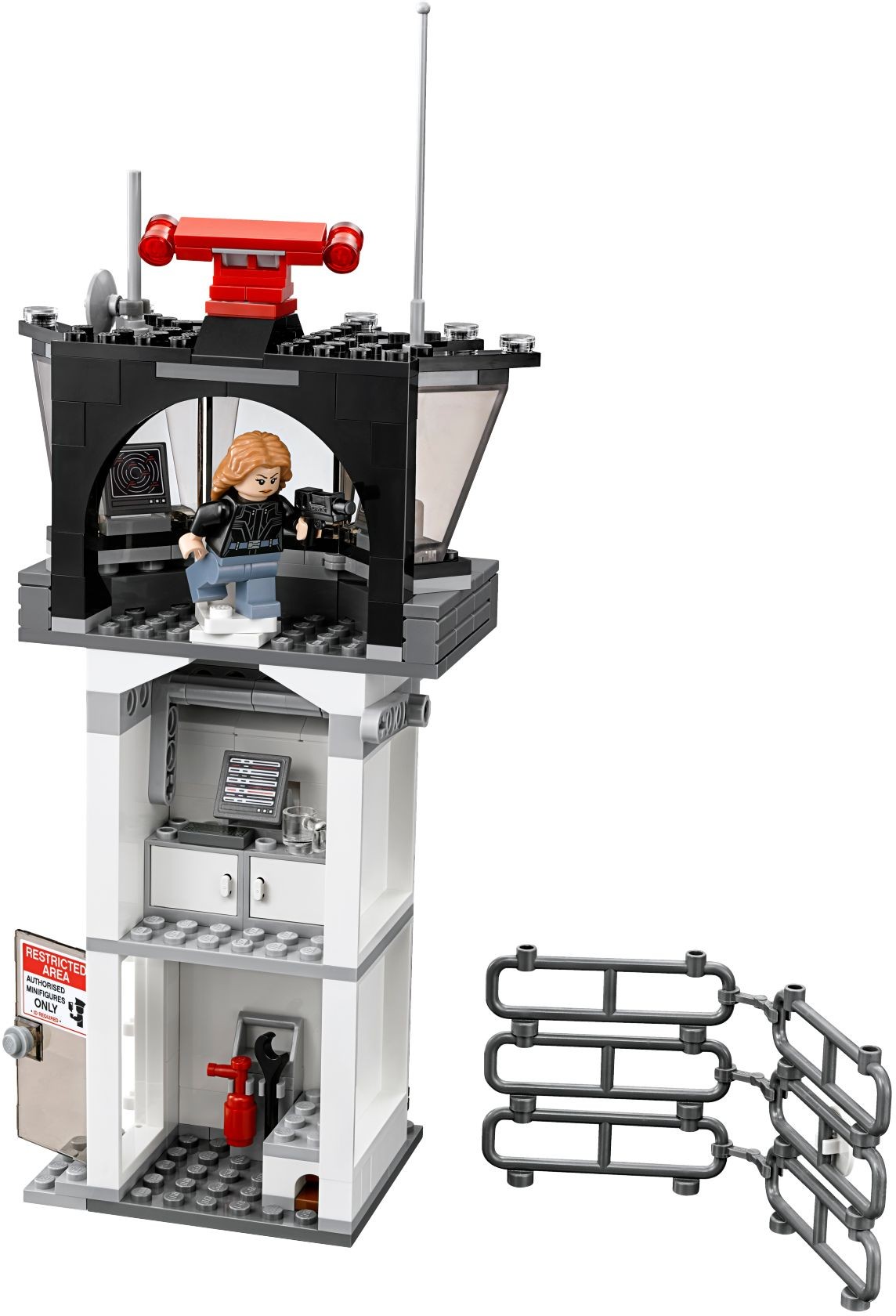 There are three stories to the Airport Control Tower – the top one has a spinny chair (which Agent 13 is standing on for whatever stupid reason) and some stickered consoles, the middle level has a cupboard with a screen and a coffee mug, and the lowest one has a clip for a fire extinguisher and spanner along with a table. The lowest level also has a door outside with a sticker saying “Restricted Area: Authorised Minifigures Only”.

There’s a play feature on this floor too. You insert the microfigure Ant-Man into the small hole under the table. This results in the boxes on the other side of the tower flying away, representing an explosion. The boxes themselves have stickers with easter eggs on them – A.I.M. (from Iron Man 3), Hammer Tech (run by Justin Hammer), and Stark Industries (y’all should know this one). Kinda cute.

There is also a play feature on the second floor. Flick a lever, the wall explodes in two odd-shaped pieces. Okay. I don’t hate these exploding features (unlike some other reviewers) but they aren’t the greatest play feature ever either as they’re very common. 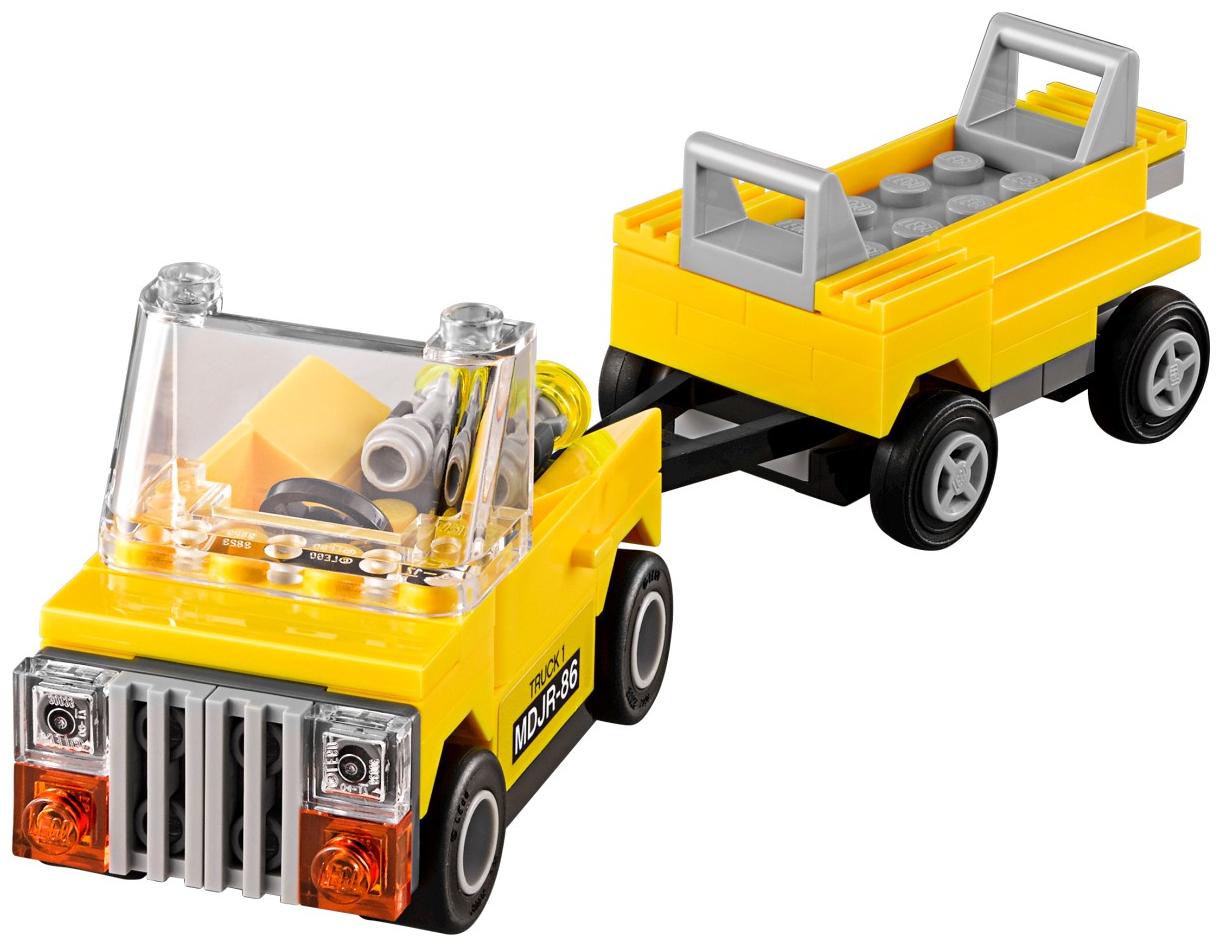 The final build in the set is a little airport luggage cart. This seems to be an effort to reinforce the fact that the battle takes place at an airport, but I do feel it is a slight waste of parts. 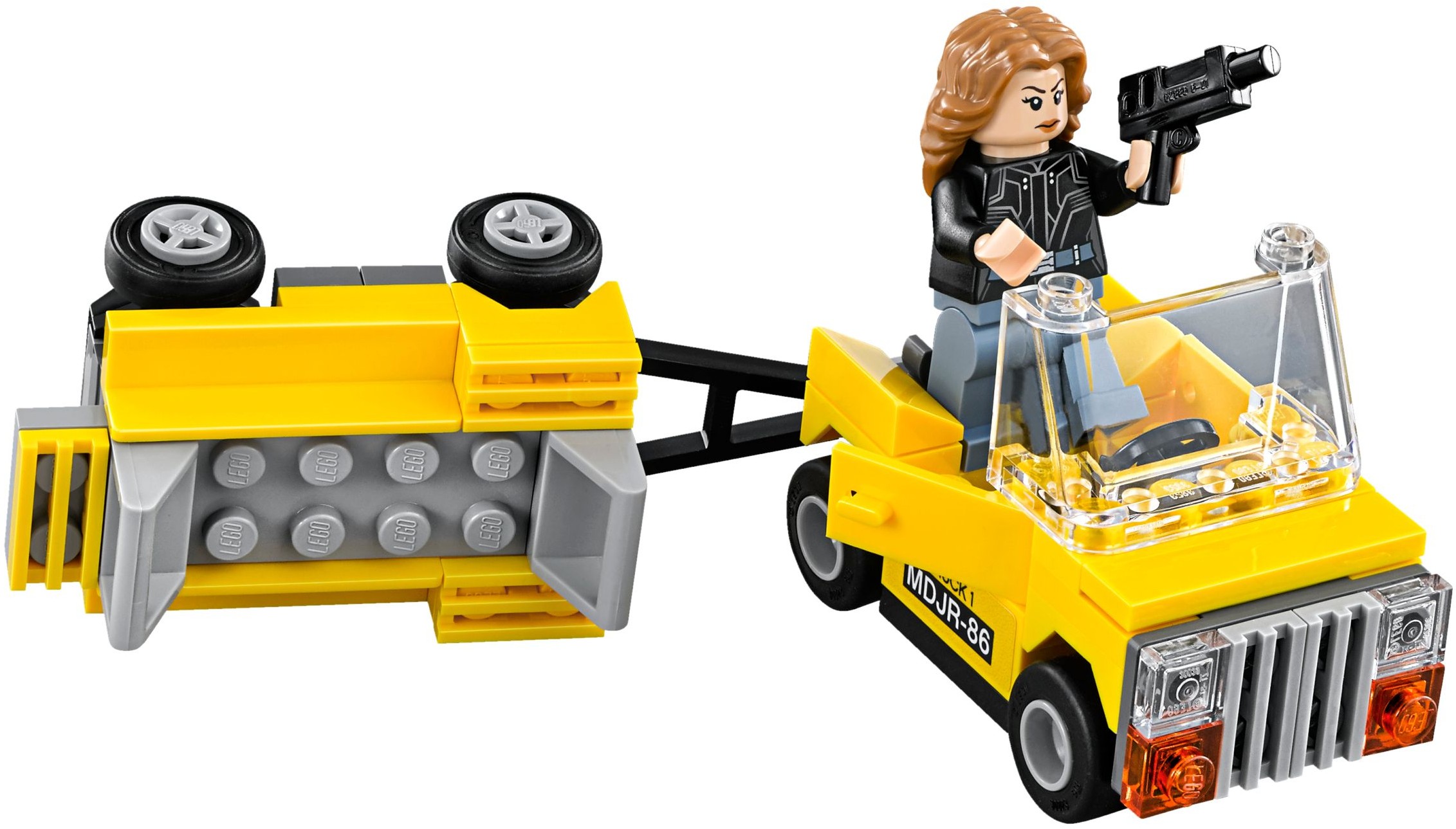 Unfortunately no minifigure is included to drive the cart so its inclusion feels even more superfluous. Oh well, you can always put one of the superheroes inside to chase the Quinjet I guess. 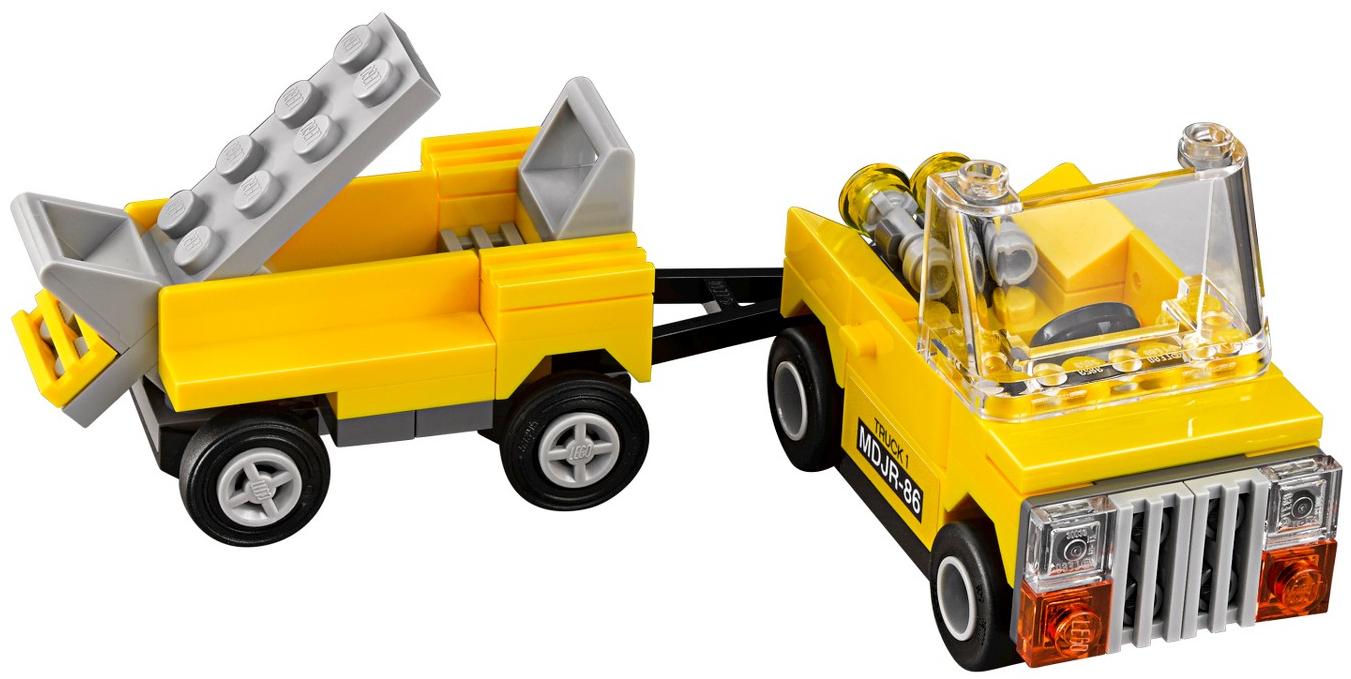 The back part of the cart also acts as a mini catapult to launch off the three luggages included in the set. The luggages themselves are cute as they have some easter eggs on their stickers too – the green one says “BLL” which is the airport code for Billund (in Denmark, home of LEGO), the brown one says Sokovia (Age of Ultron reference) and the black one says Wakanda (Black Panther reference). 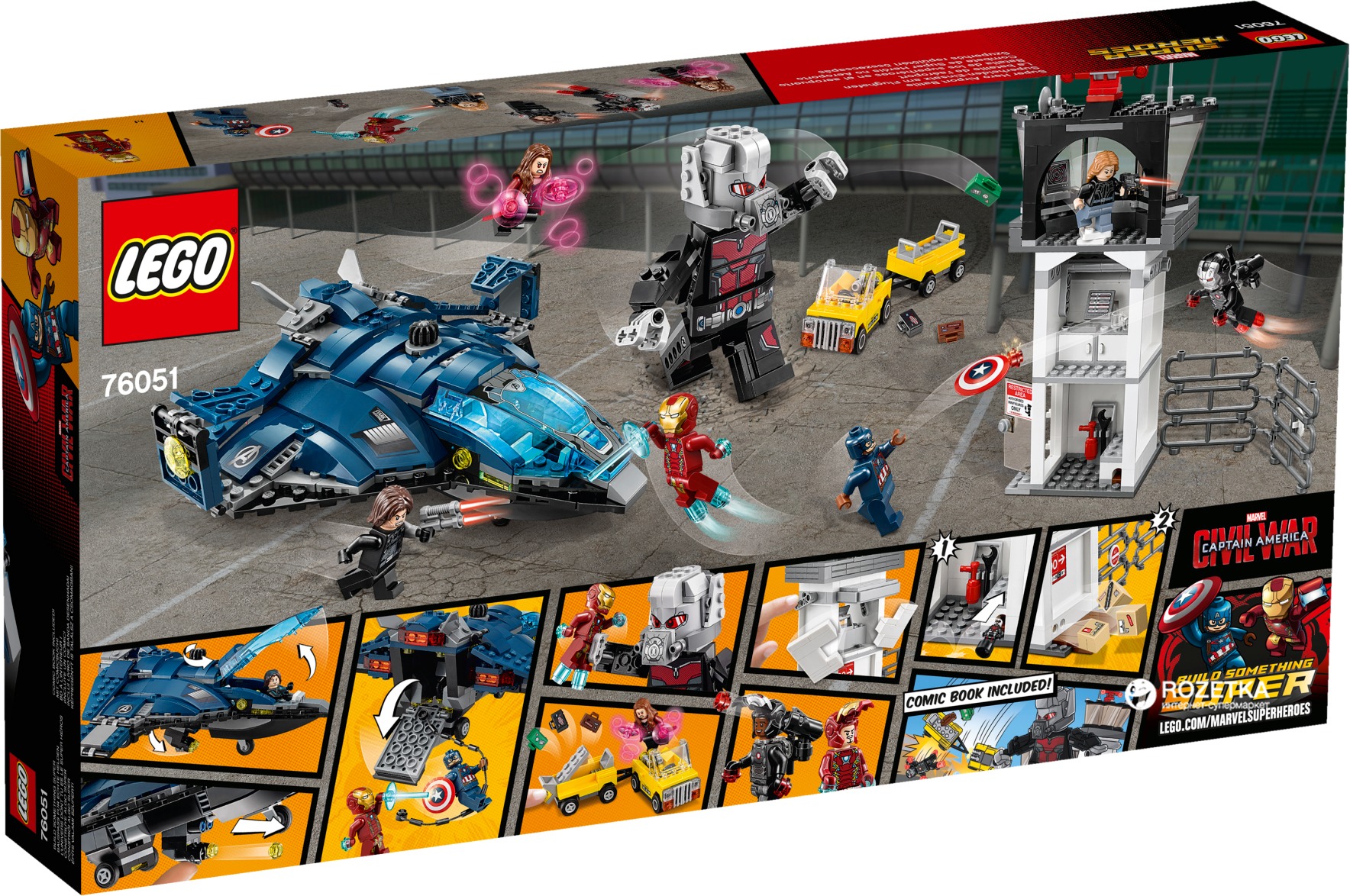 Overall, I’d say this set is definitely a good set. The minifigure selection is outstanding, the playability is good, and no complaints about the price. That said, the Quinjet and the Control Tower builds could be better. Worth picking up if you still can.

Thanks for reading! What do you think? Let me know in the comments below!