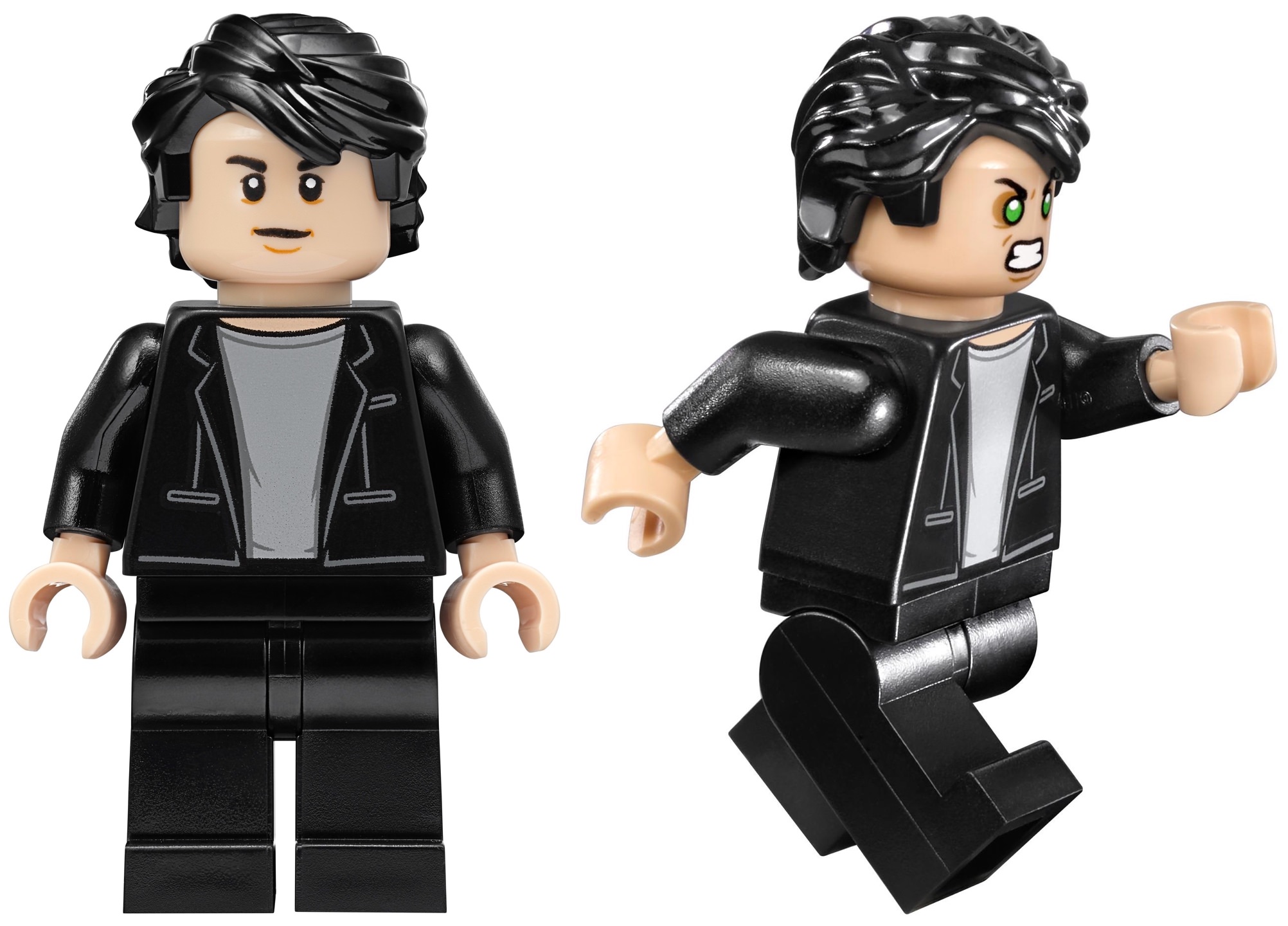 The first minifigure is Bruce Banner and spoiler alert – if this set is accurate, he’s the one in the Hulkbuster. This minifigure is sadly reused from 76084, which is inaccurate as this isn’t really how Banner looks in the MCU – the hair is pretty off. His head is double-sided, with a neutral expression on one side and an angry, transition-to-Hulk face on the other side.

The second minifigure is Falcon. He has received an update for Infinity War and looks pretty good. Now his color scheme is dark grey torso + black legs, unlike the previous variant where it was light grey torso + dark grey legs. I feel this color scheme looks a lot better and more accurate. His torso print looks good, as does his head print – this side shows his goggles face, and I like the little details like the golden line on top. The other side of his head is a goggle-less Sam Wilson head, and that’s a nice surprise! 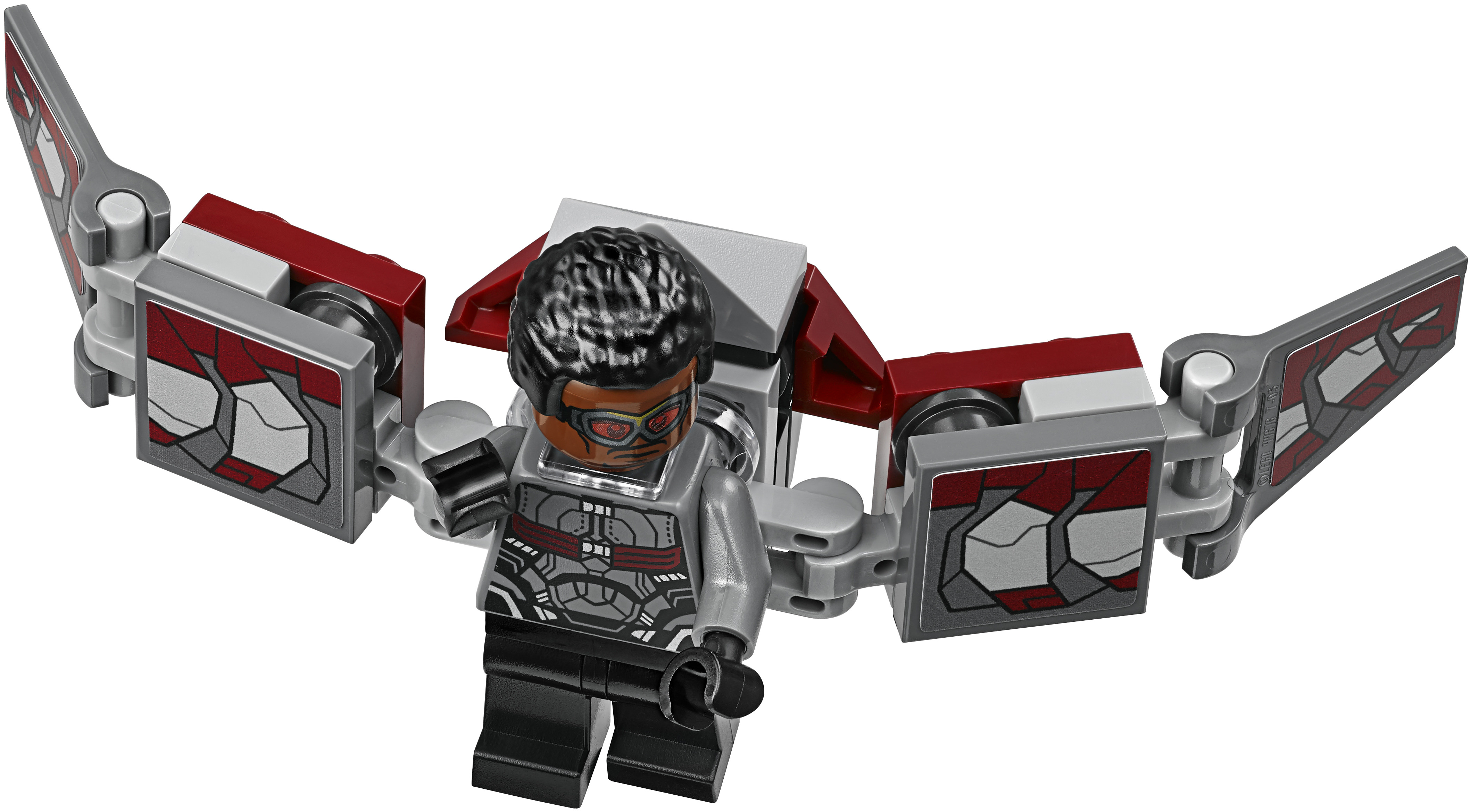 His wings are now brick-built, and attached using clips so can be posed in ways you like. There are four stickers for added detail. I think it’s not bad, but I do feel they look a bit too thick and disjointed. 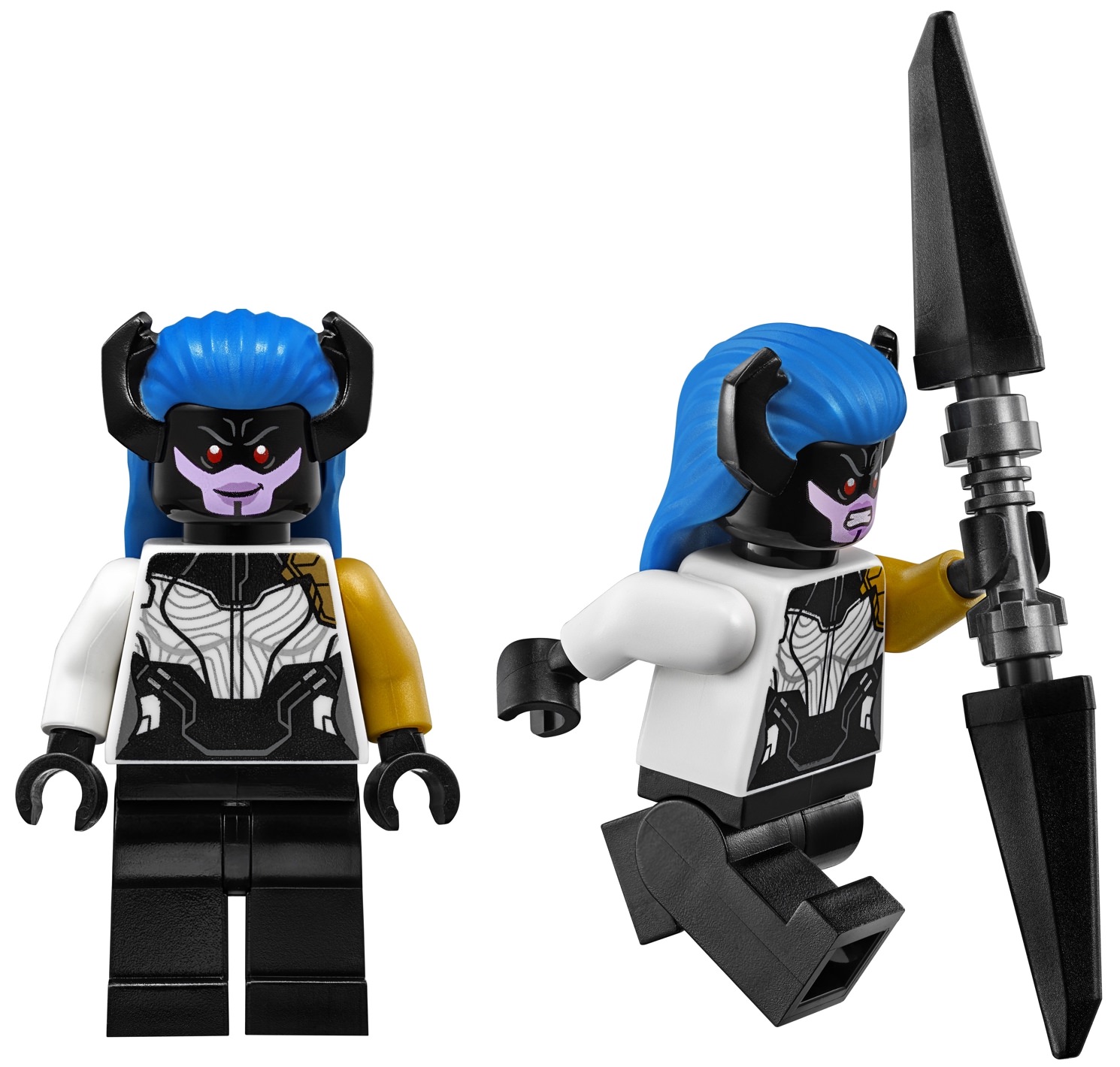 The next minifigure is a member of Thanos’ Black Order, Proxima Midnight. She has plain black pants and a printed white torso with one gold arm. Her head is black with two printed expressions, and she has a new blue hairpiece with black horns. That said, I feel she’s a bit too plain in comparison to the actual character in the movie. Her face print is also a little too thin in terms of printing depth. Her weapon is a double-sided blade piece, but her weapon in the film is more of a spear-like thing. 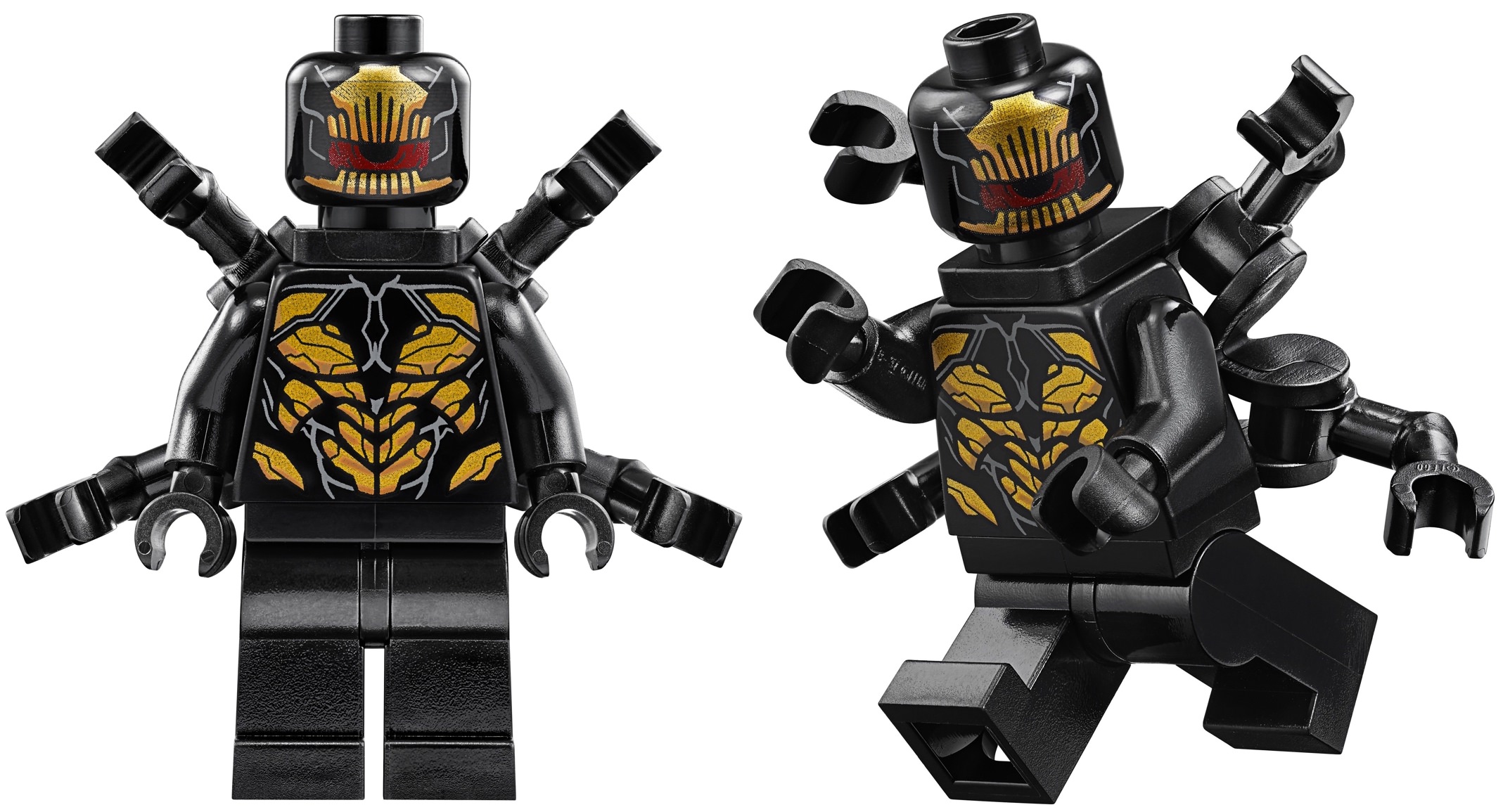 Last up is a generic Outrider. These are inaccurate with their six arms but I still like how they look.

Every LEGO Infinity War set includes an infinity stone and this one is – oh my gosh – the Soul Stone! Is this stone placement accurate? Is the Soul Stone in Wakanda? Was it originally there or was it brought there? So many questions!

Anyway, these come packaged in a sprue of four, giving you three spares in case you lose one. They also have a golden stand so minifigures can hold them, though this one has an extra golden 1×2 jumper plate underneath. 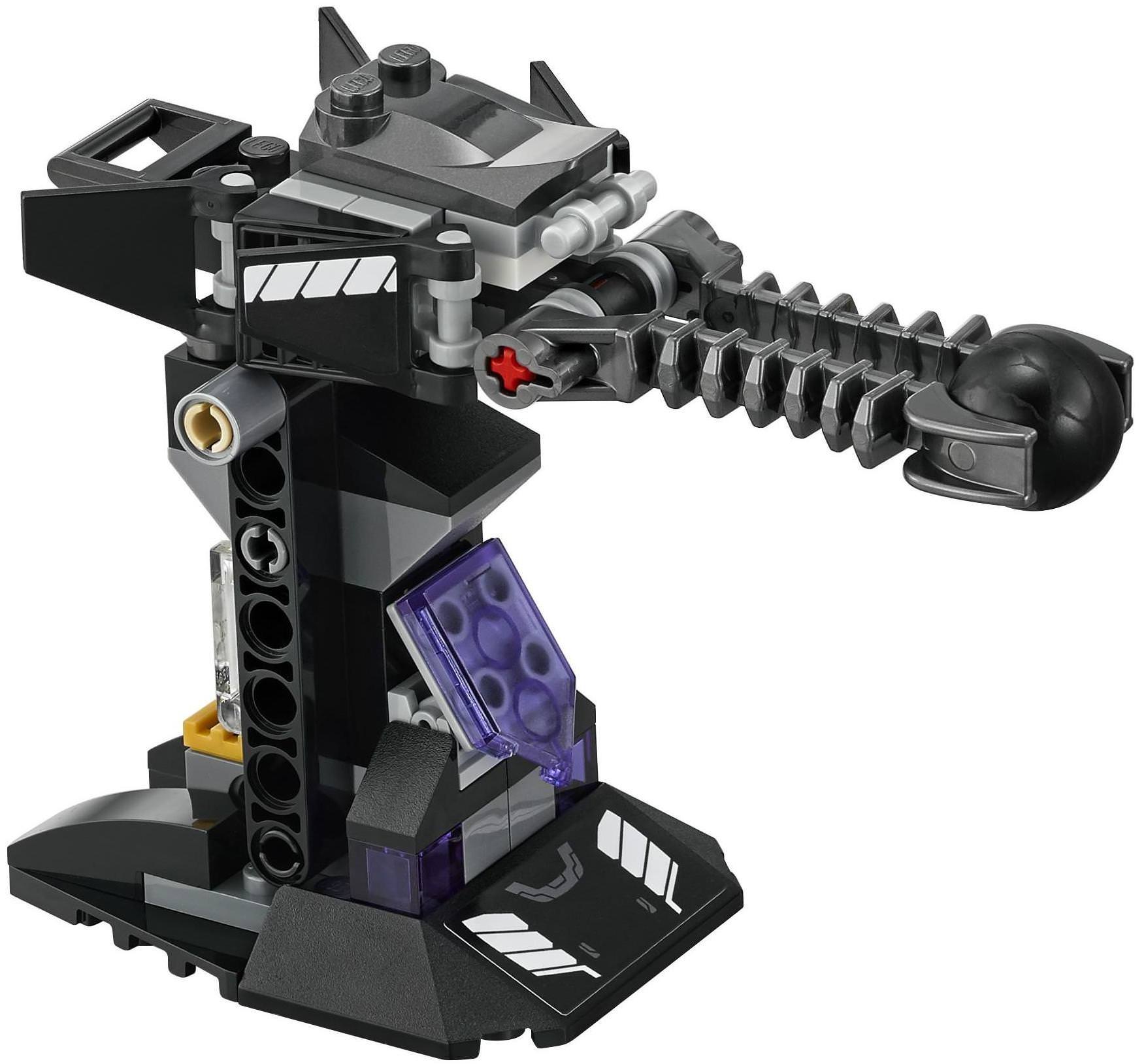 There are two builds in the set, the first of which is this hijacked Wakandan cannon (yes! I was right!) It has a black color scheme with white highlights, just like the Royal Talon Fighter. 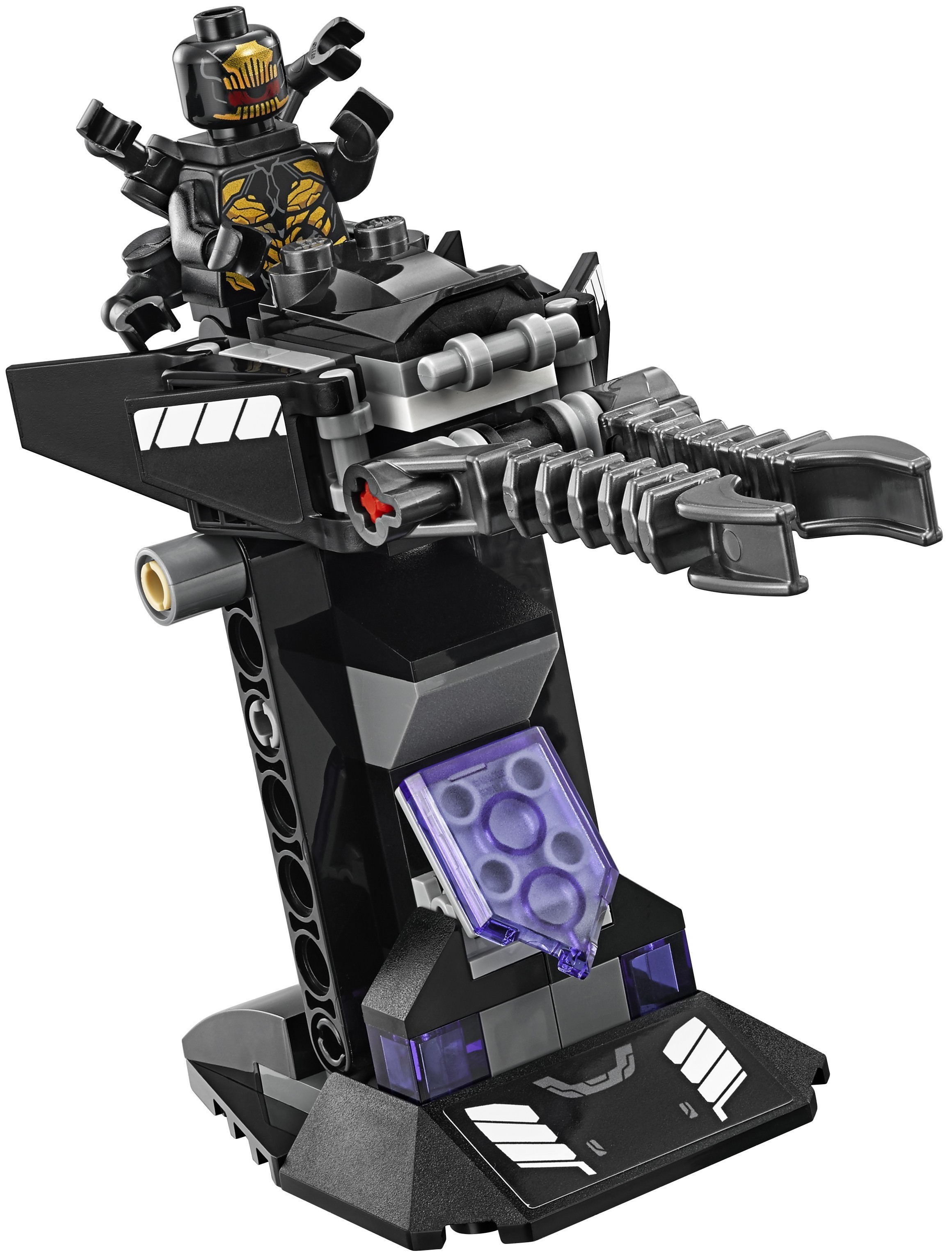 There’s a seat at the back for an Outrider (or any minifigure you want, really). 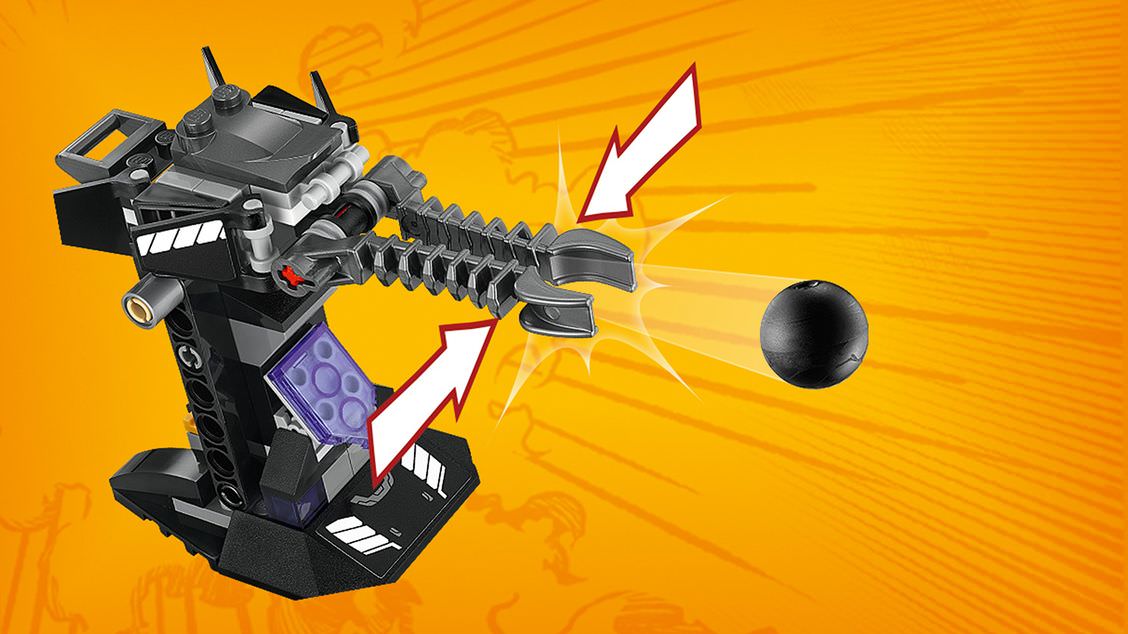 The cannon is a ball shooter, so you can pinch in the pincers to fire off these black spheres. One spare is included. These fire pretty well – I like them. 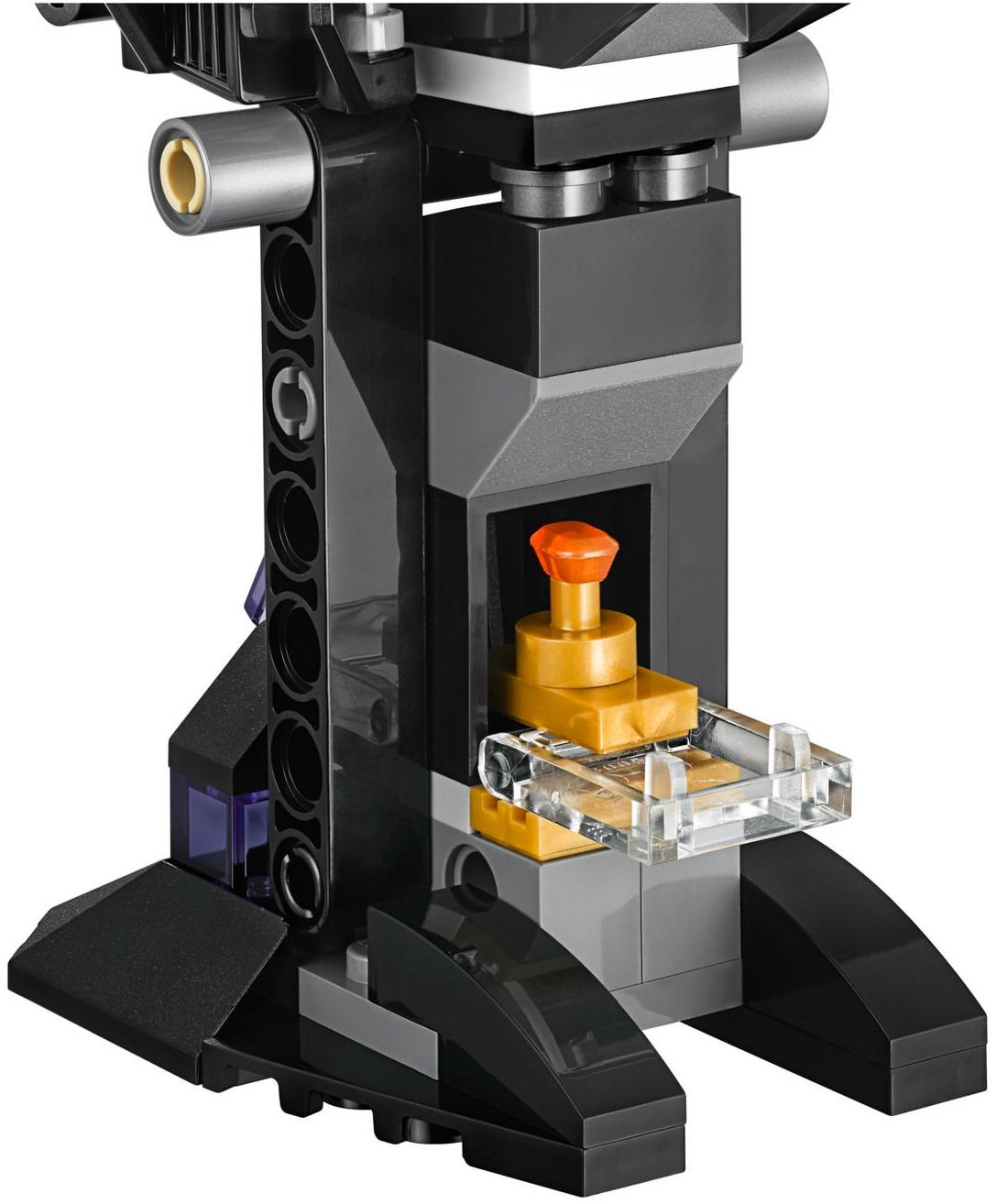 The back of the cannon has a little mailbox which has a space to store… the Soul Stone. Yeah, that’s definitely not where it’s going to be in the movie, but maybe the stone will be in Wakanda. Who knows! Anyway, this is just a handy way to store the stone.

There’s another play feature to do with the cannon which I’ll talk about later. 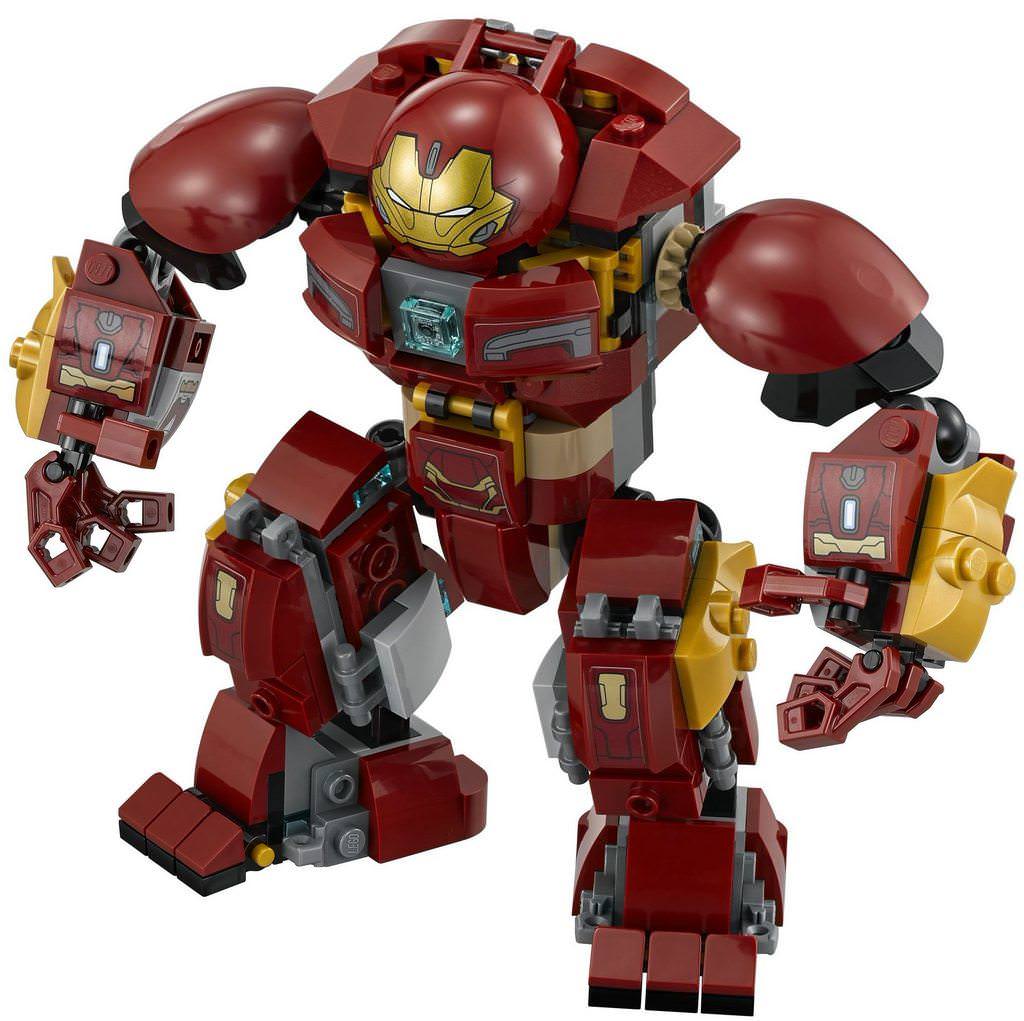 In terms of poseability, it’s decently poseable for the arms – they are mounted on ball joints and don’t really have any serious obstructions. The fingers and toes are articulated on clips, while the lower leg is connected via ball joint. The legs connect to the main body using the ratcheted joints. Unfortunately, the design of the feet limit how far forward they can be hinged, which severely limits the poseability of the legs. This is very, very disappointing as the previous Hulkbuster’s leg poseability was actually better. 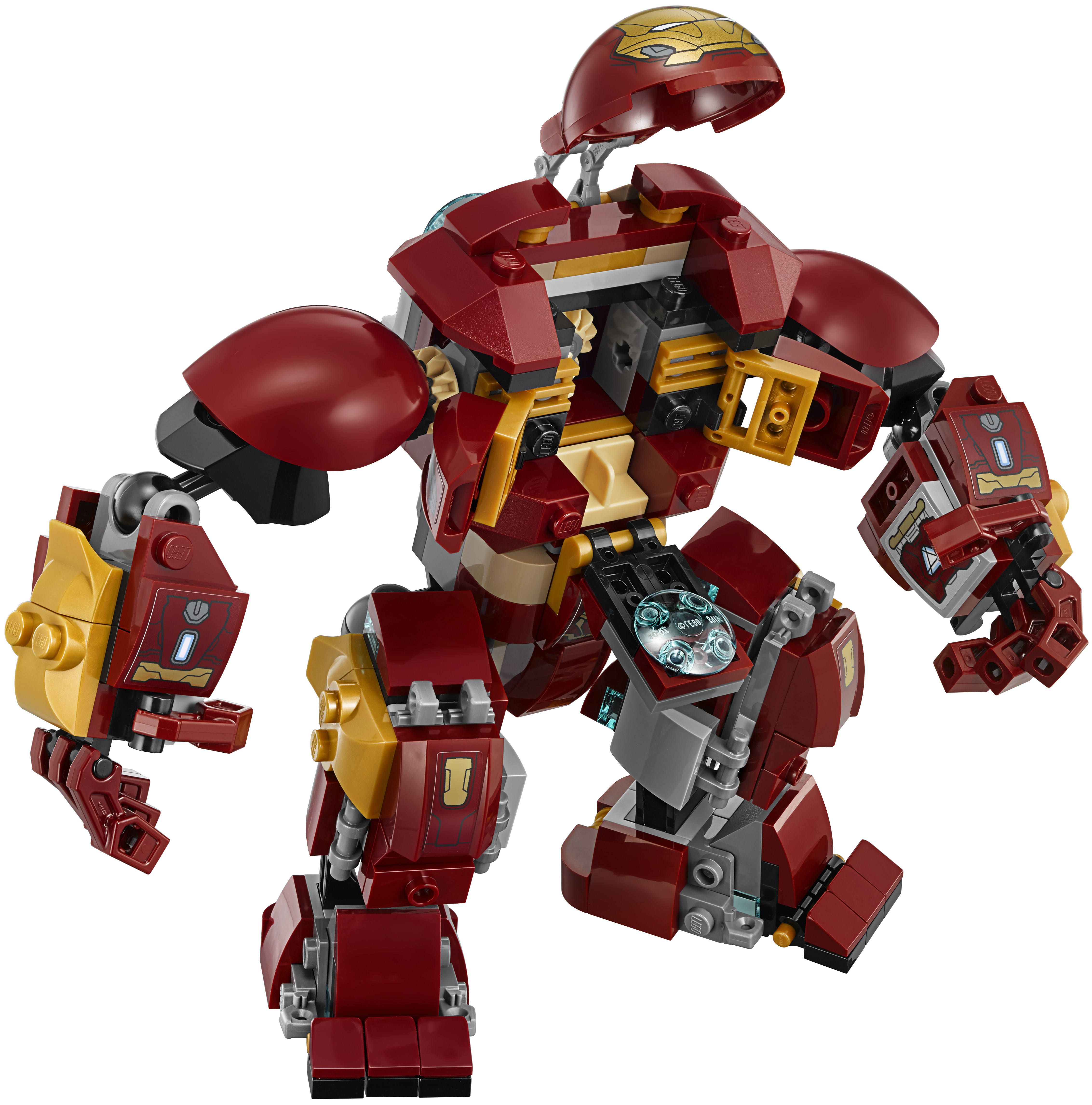 The Hulkbuster has four panels which open up: the head folds open, the two side panels fold outward, and the middle chest panel folds downward. Inside is a little leg bracket. The use of this is necessary as with studs Banner might not be able to fit inside. He fits in, kind of standing halfway on the bracket. No controls for him, though I guess that 2×2 translucent light blue slider plate could count. The panels can close up and conceal him. 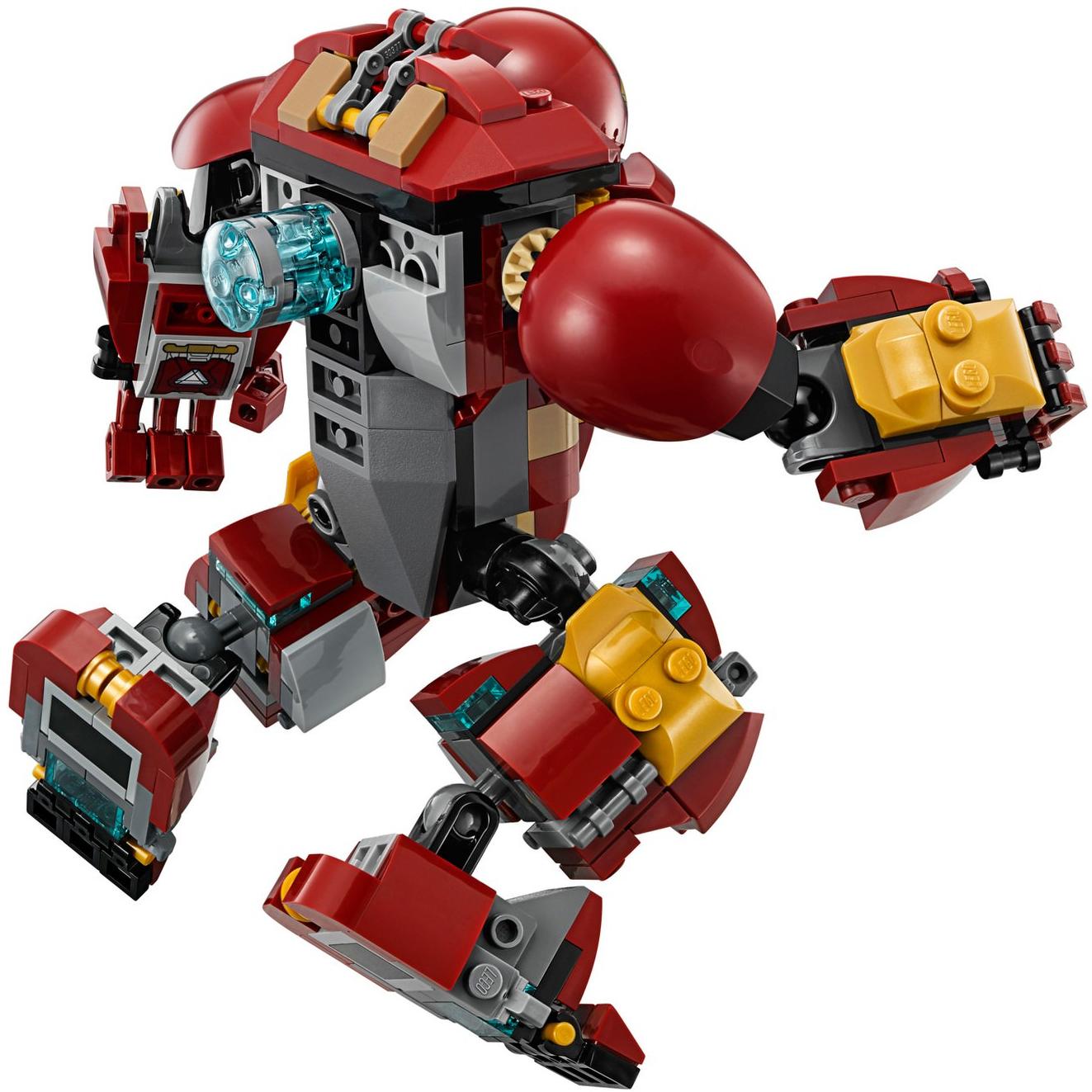 The Hulkbuster’s back has a 2×2 translucent light blue round brick. What does that do? Well, when you spin it, the Hulkbuster’s right arm will spin around, just like many CCBS arms. I don’t really like these types of play features, though. 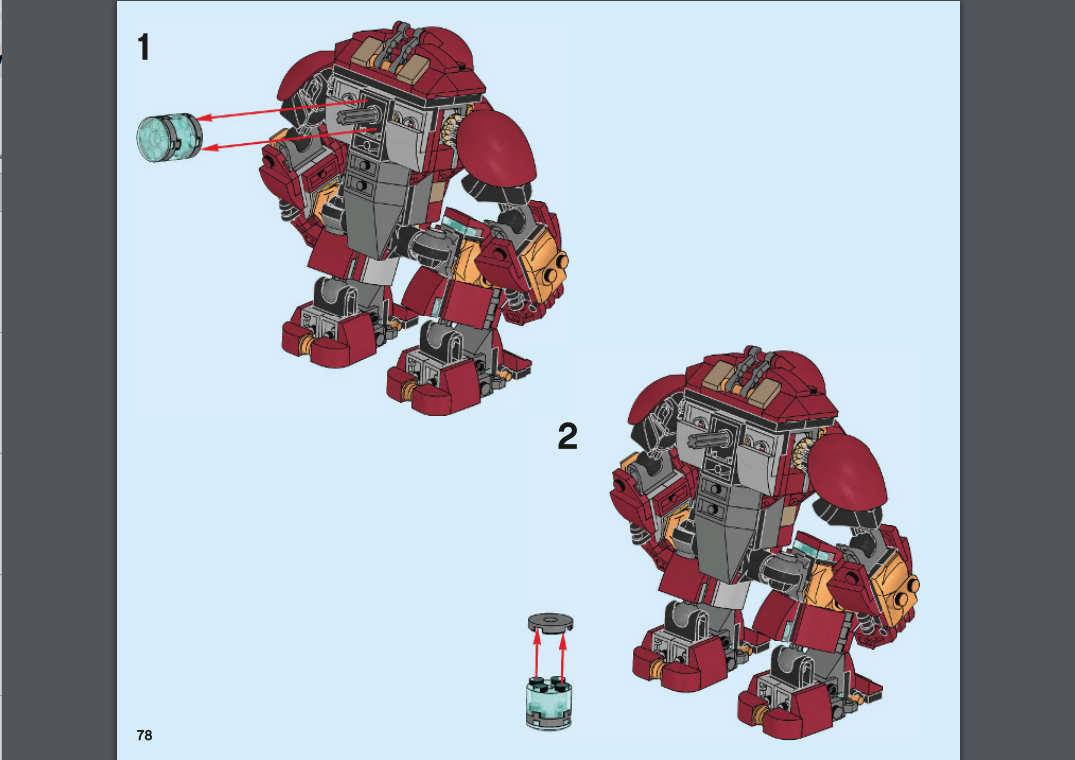 However, fortunately for people like me, LEGO includes the option to leave out this feature by taking off the cylinder build, removing the top tile, and reattaching it. This does not allow the gears inside to move, making the right arm move solely on the ball joint connection, eliminating any friction problems. Yay! 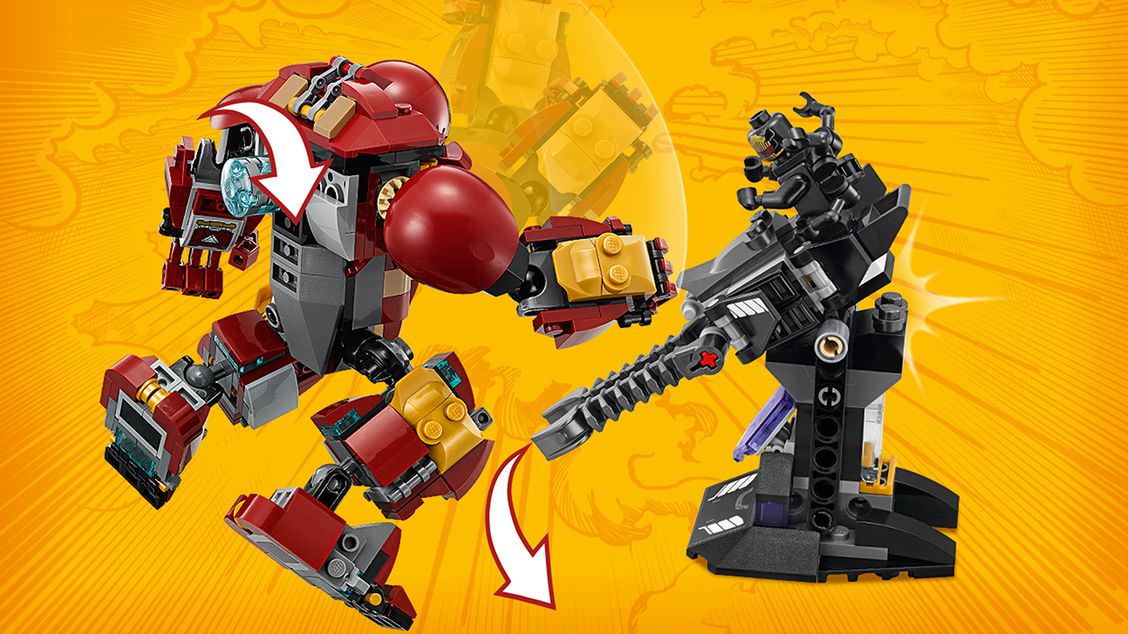 What is the point of the swinging arm feature? Well, you use it to whack the turret’s cannon portion. 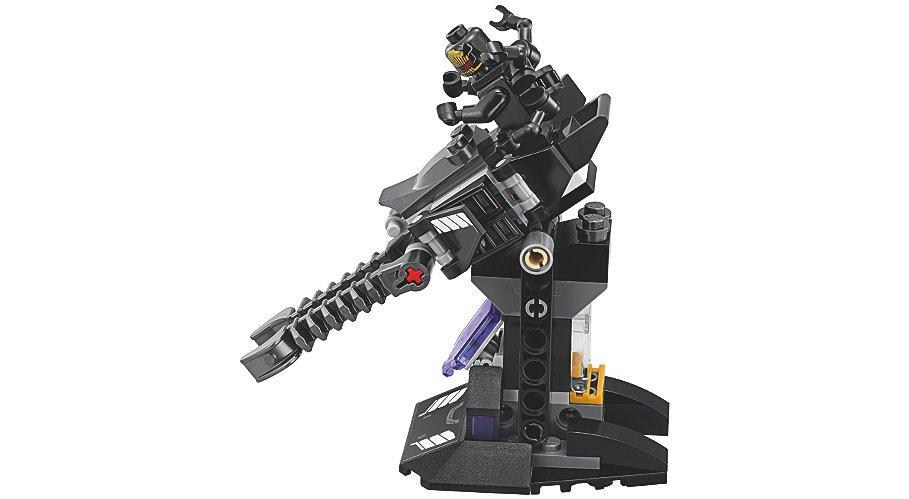 That section is actually mounted on a hinge and connected normally by only two studs, so it is knocked over and looks like it has been disabled. Pretty cool.

That concludes my look at the LEGO Infinity War Hulkbuster Smash-Up set! On the whole, I do think it’s a good set, though I have been slightly let down. The leg poseability is a big issue, and is pretty disappointing, That said, the four minifigures included are good, the turret build is fine, the Hulkbuster looks pretty good, and the price is great. So, not a bad set. Just be aware of the legs.

Not bad but has some flaws. Thanks for reading! Let me know what you think in the comments below! I’ll drop a render of the LDD file and if you would like it, do contact me! 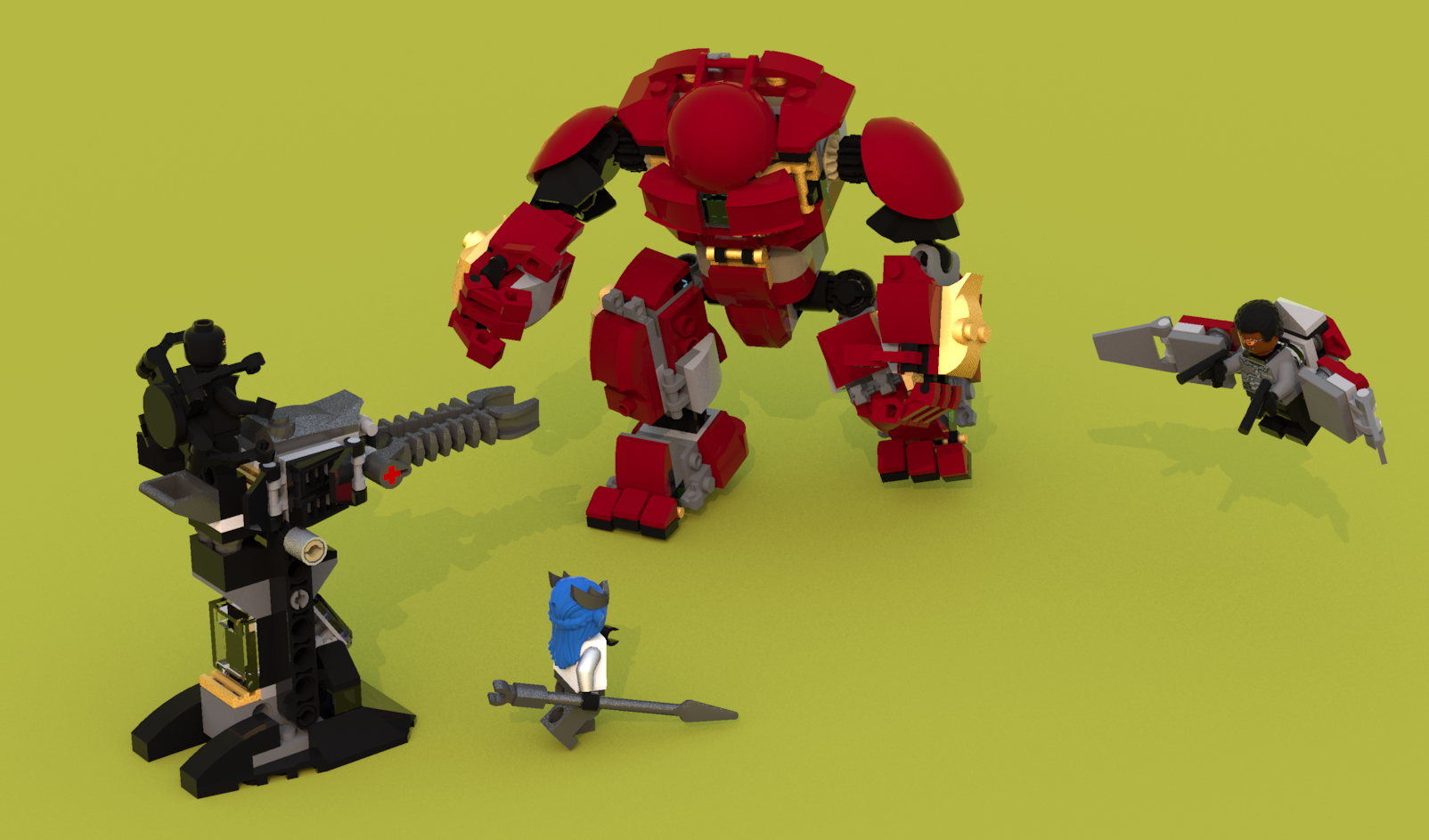