Our first two minifigures are Han Solo and Greedo.

The other two minifigures in the set are Wuher and a Sandtrooper. 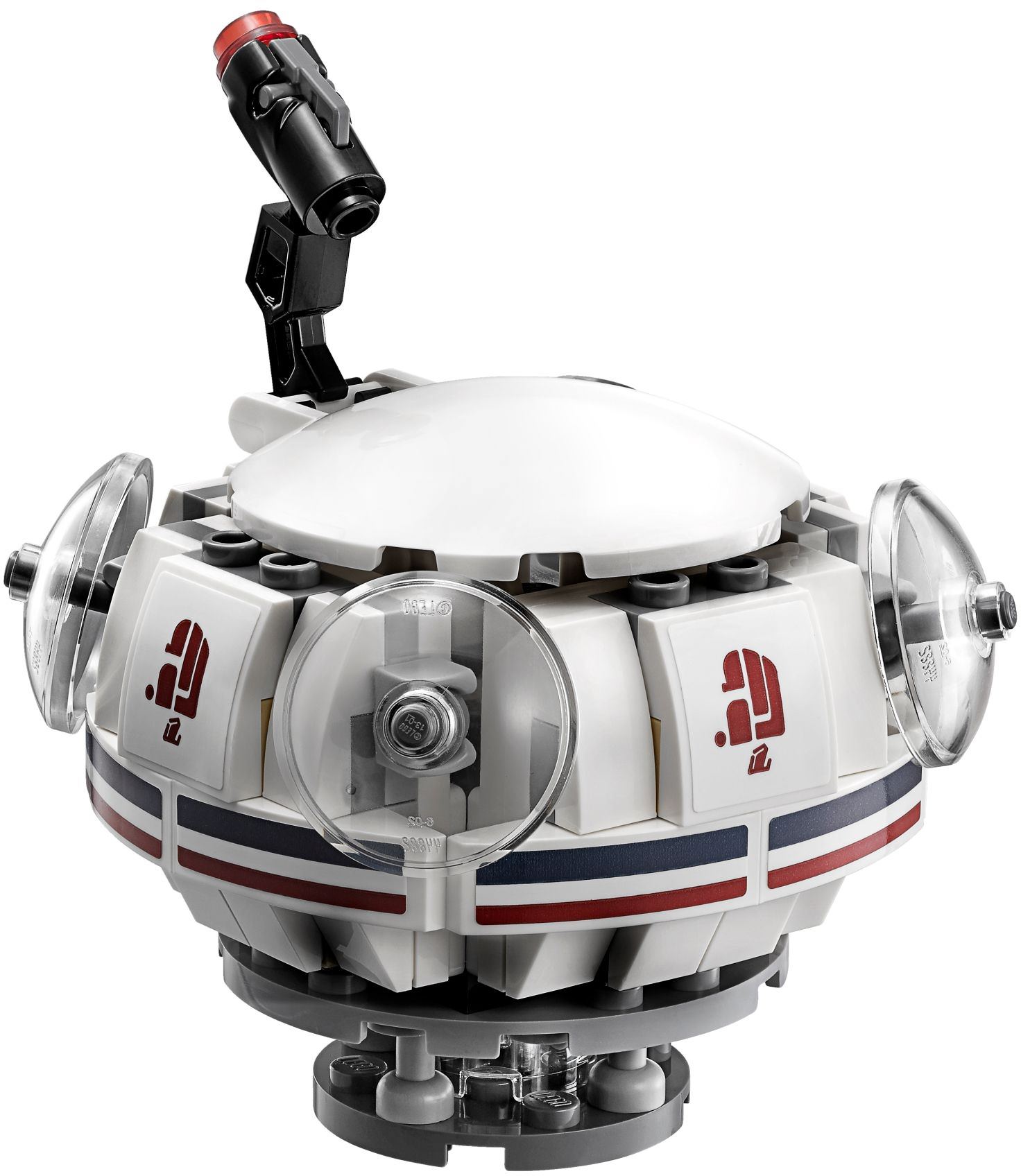 Anyways, on to the builds! The first build in the set is a Ubrikkian 9000. You can click on the link to see the ship in-universe. It was seen briefly outside the Cantina in one or two scenes so I suppose in terms of location it’s accurate, but it’s really a blink-and-you’ll-miss-it item. I myself did not know such a ship existed until this set.

The ship has quite a few stickers, used to add decoration along the sides. The four viewports are represented by 3×3 clear radar dishes, which isn’t really very convincing if you ask me – heck, black would be more accurate really. 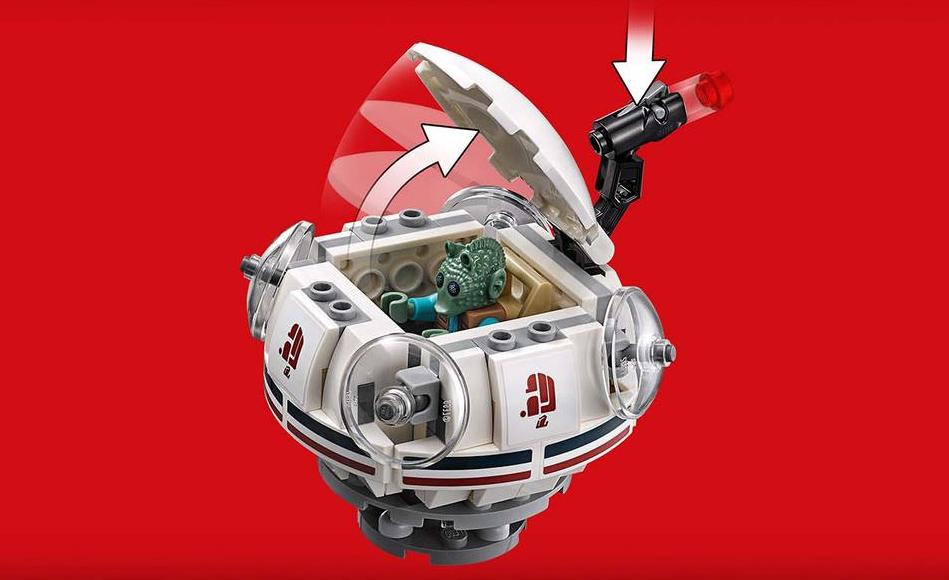 The hatch of the ship can be opened to put a minifigure inside – the box art suggests that you put Greedo in. This is inaccurate as the Ubrikkian is not Greedo’s ship – it’s actually the “Manka Hunter”.

There’s also a gun at the back which is represented by the stud shooter – if you ask me, this is kind of awkward-looking, but you can leave it off easily. 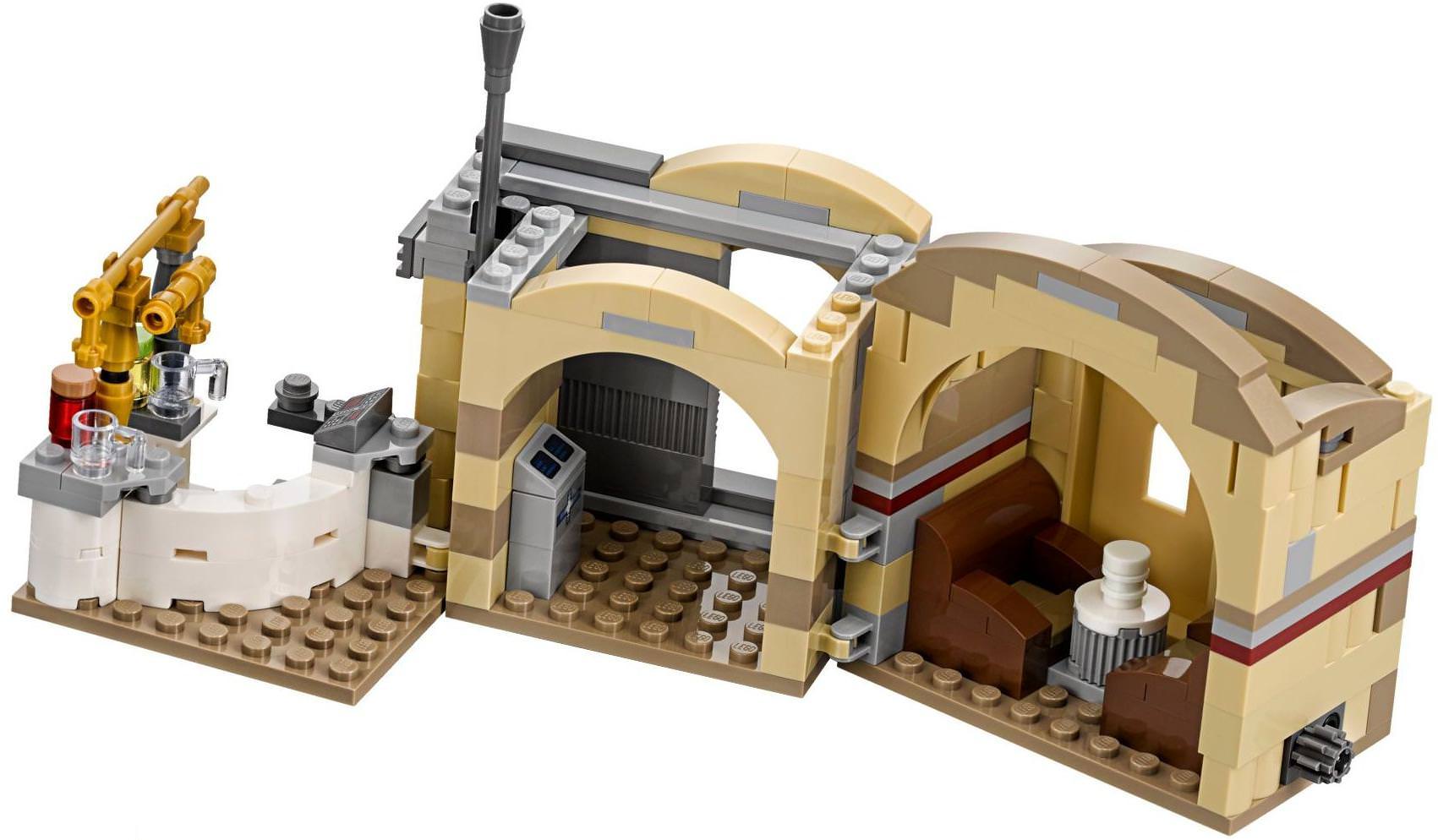 The other build in the set is the Cantina itself. It’s basically a combination of three little Cantina vignettes.

The three rooms are joined by clips so you can detach them, or hinge them around. 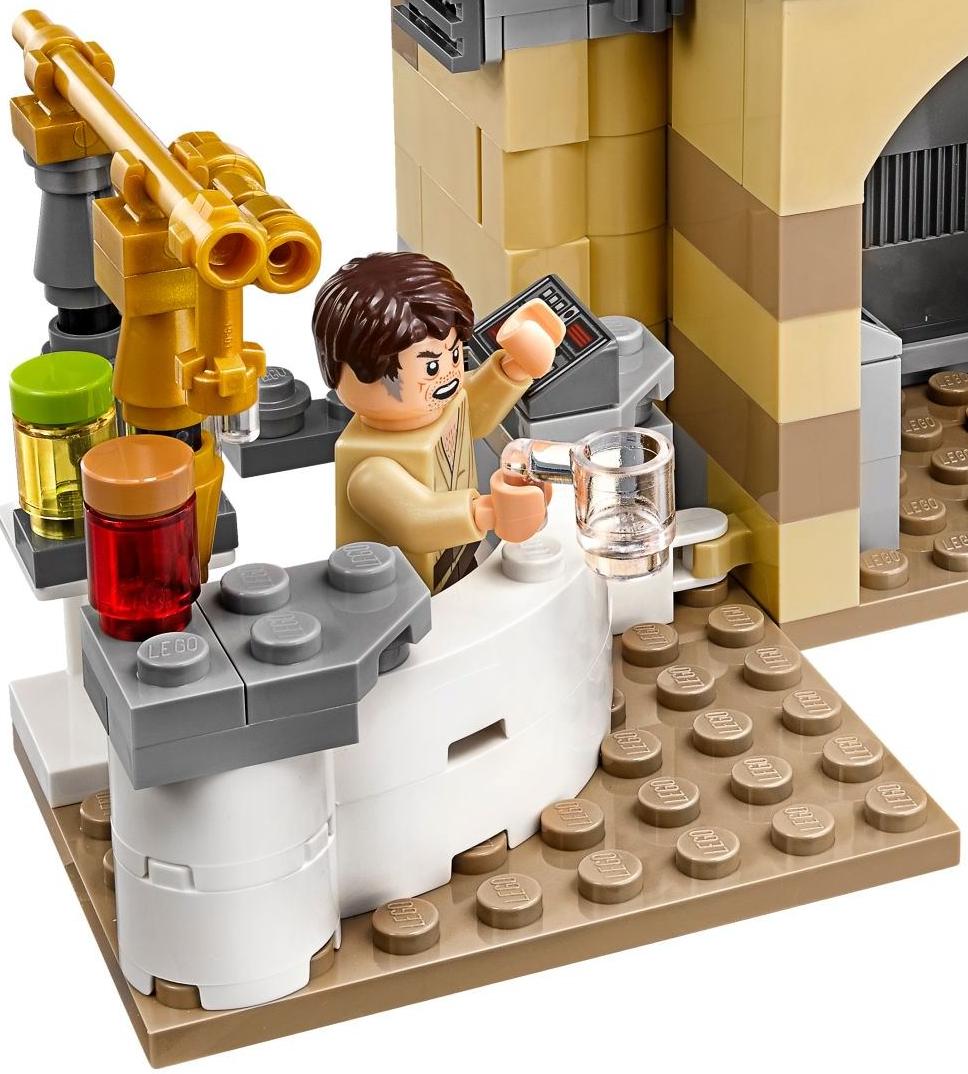 The first build is Wuher’s bar counter. It is one quarter of a circle, and uses white pieces to form the wall of the counter. There’s the complex golden piping off to the left side (of this picture), and there’s a cash register and even a clip for a blaster on the far side. Wuher can serve drinks from here, though I don’t really like how the grey counter top awkwardly cuts off in the middle of the counter. It just looks odd. 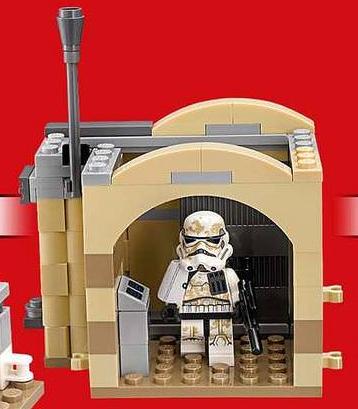 The middle section is an entranceway. There’s not much inside, with only a stickered 1×2 slope representing a droid scanner. You can put a minifigure here to represent them walking in – I usually put the sandtrooper. 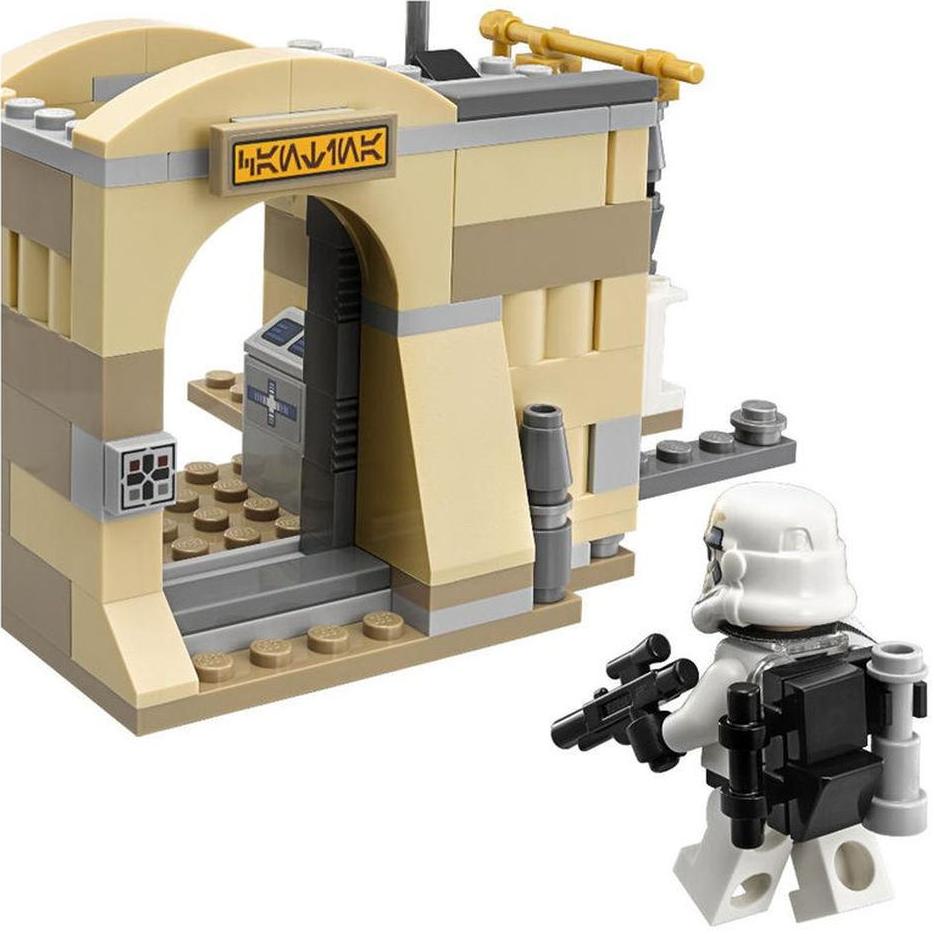 The other side has an opening sliding door, a stickered 1×4 tile as a sign, and a printed 1×1 tile. 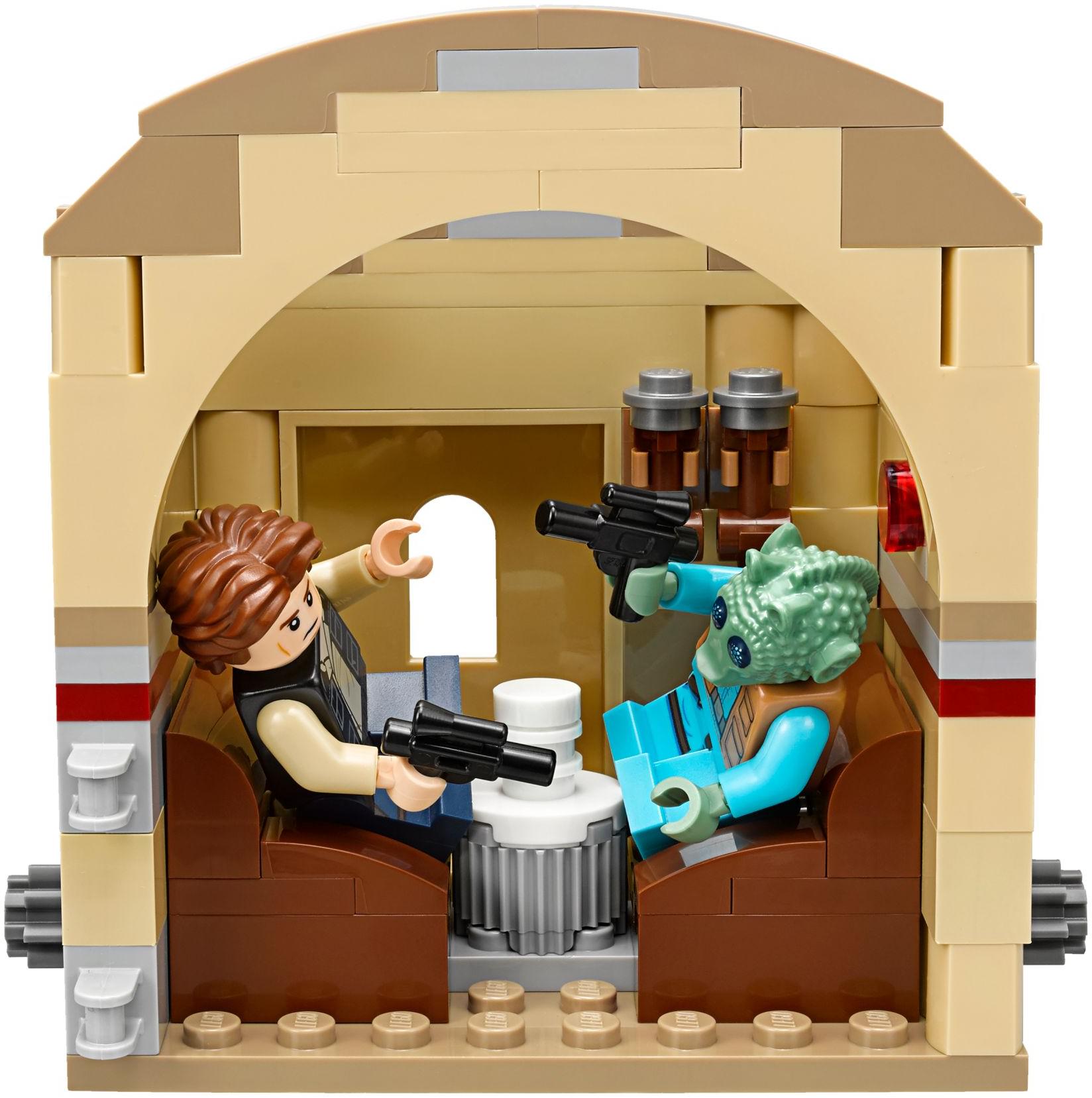 The final room is the place where Han and Greedo have their showdown. It has a couple of nice brown seats, with a 2×2 table in between. The chairs look nice but one thing I don’t like is how the table is too small for Han to conceal his weapon. There’s a lamp on the table just like in the movie, and it is glow-in-the-dark. 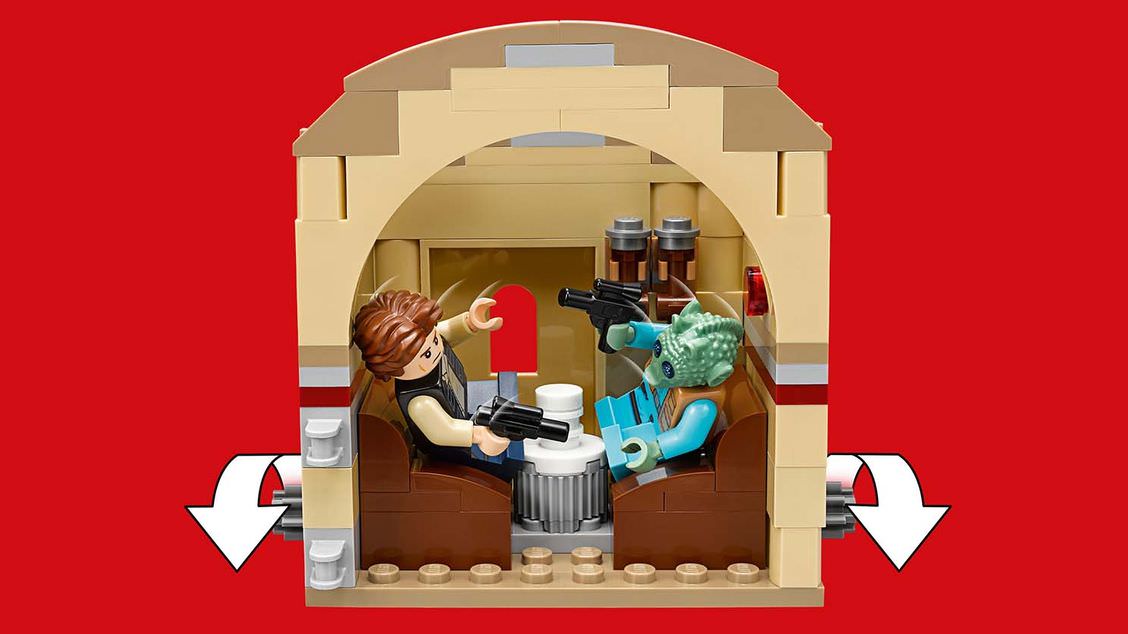 You may also have noticed the gears on either side of the wall. Turning them makes the minifigures flip/jump out of their seats, to replicate the shooting scene. This is a little weird, but I appreciate the effort I guess. One thing I don’t like is that the gears can obstruct the hinging so the Cantina can’t be perfectly flat. Oh well, as John Boyega said in this hilarious Fear Box video, “It is what it is, it is what it is”. 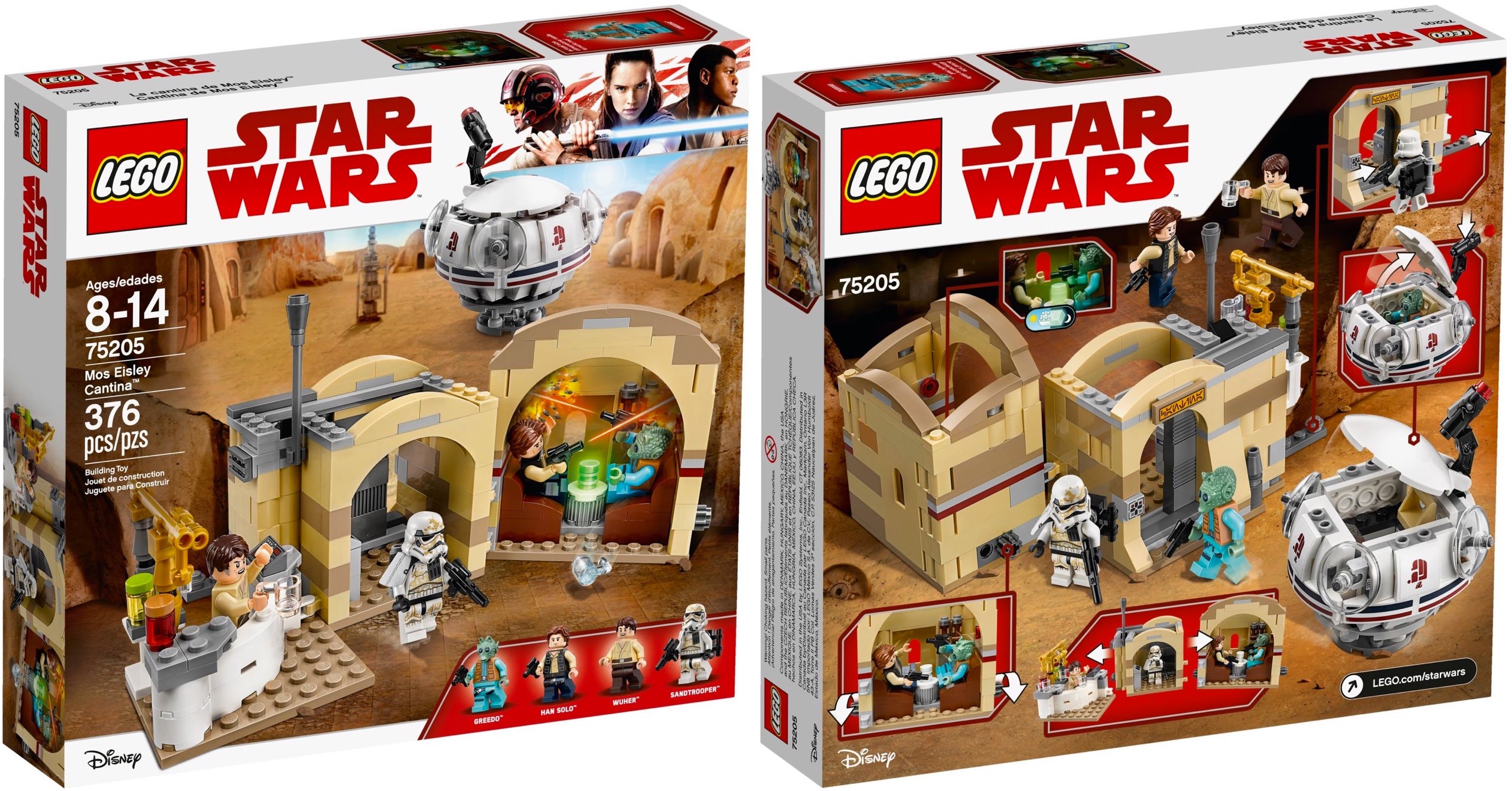 Thanks for reading this review! Let me know what you think in the comments below! 🙂