The first minifigure in the set is Dr. Strange (oh we’re using our made-up names?), Sorcerer Supreme and wielder of the Eye of Agamotto aka the Time Stone. He’s been updated from his 2016 appearance: he retains the original head, torso, and legs, but his lower cape is now made from the softer material, and his hairpiece has been changed to a more accurate shape. He comes with orange Power Bursts, but if you ask me I think they aren’t the best match for Strange, as his powers are smooth circles and not jagged like the Power Bursts. 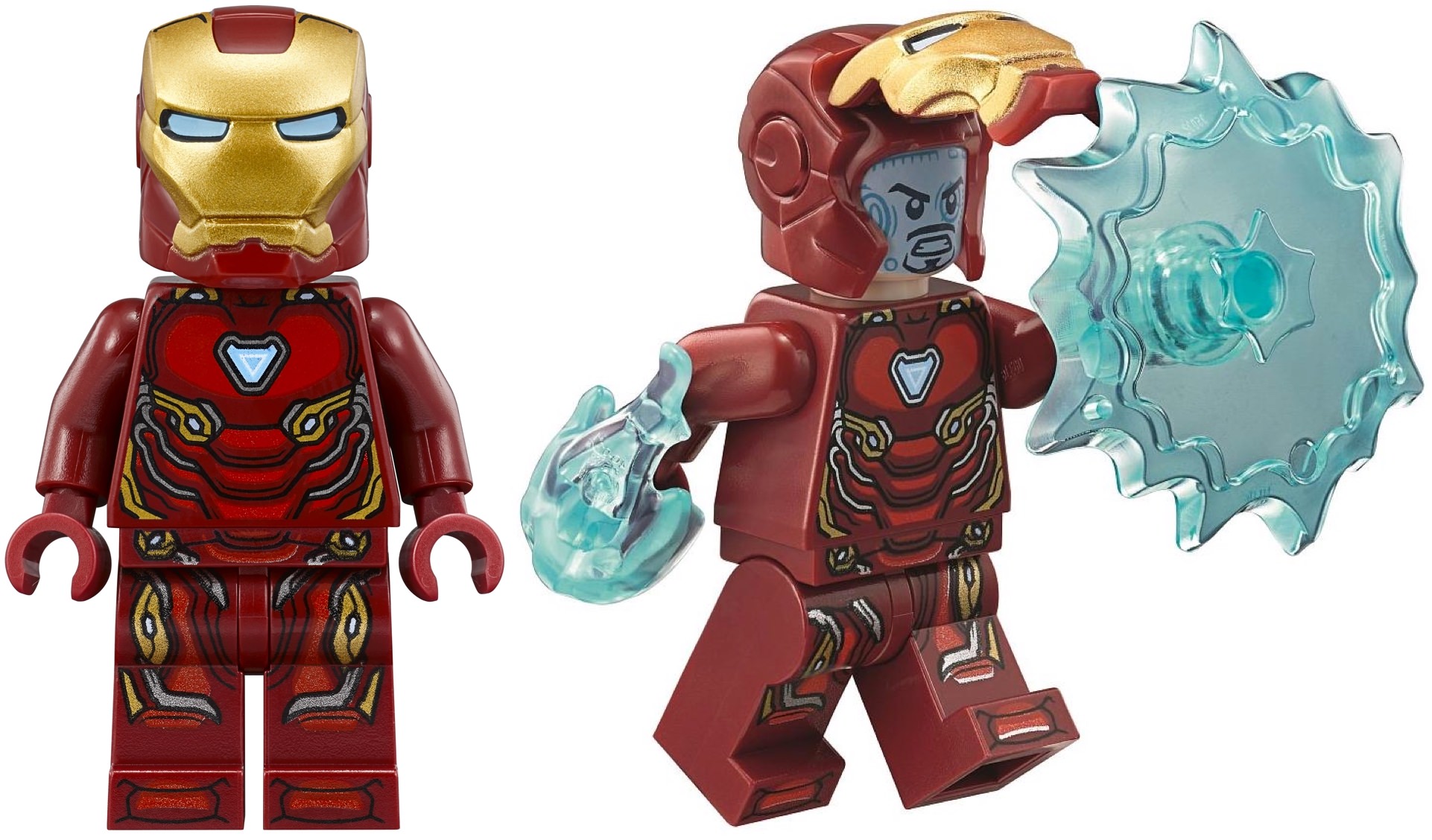 The second minifigure is Iron Man in his MK50 suit. This is the same minifigure included in 76107 Thanos’ Ultimate Battle, but without the neck armor attachments. It still looks good though, and I like his HUD head print. His alternate face shows a smirk. He comes with translucent blue Power Bursts which look good on him and can be put into many different combinations.

The third figure is Iron Spider. This is the suit seen at the end of Spider-Man: Homecoming and also in the Infinity War trailers. Sadly this set doesn’t come with a head piece for Peter Parker, but you can make your own I guess. The head and torso prints look good, with the neat gold highlights and the arm printing, but his legs are not dual-molded which looks absolutely dreadful. Why LEGO chose not to dual-mold the legs boggles my mind, an absolutely dumb decision, especially since LEGO dual-molded the previous Spider-Man minifigure. He uses the Outrider neck attachment to attach his four golden arms, which are an iconic feature of the Iron Spider suit but have not appeared in any official Infinity War clips yet. It looks good but maybe the neck attachment should have been remolded in red. He has white Power Blasts to represent his blasts, along with a long white rope. 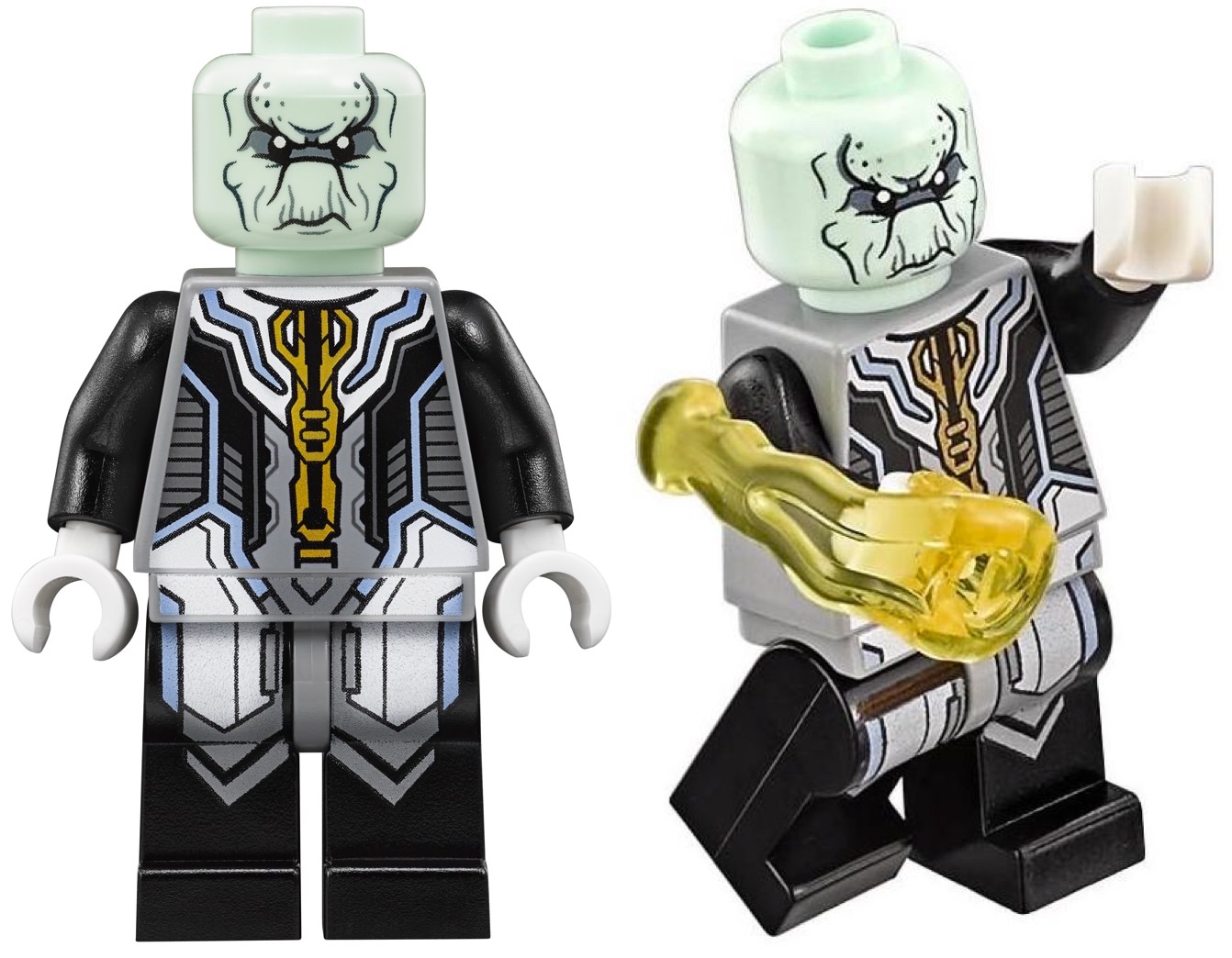 The fourth figure is Ebony Maw, a super-creepy member of Thanos’ Black Order. He’s the only LEGO Black Order member to get leg printing, and it definitely benefits him. His outfit looks really good, and I also like his creepy aqua-colored head – LEGO did pretty well on his head considering it’s hard to get the resemblance right. He comes with yellow Power Blasts, though sadly his hands can’t be posed into a “Shhhhh”. 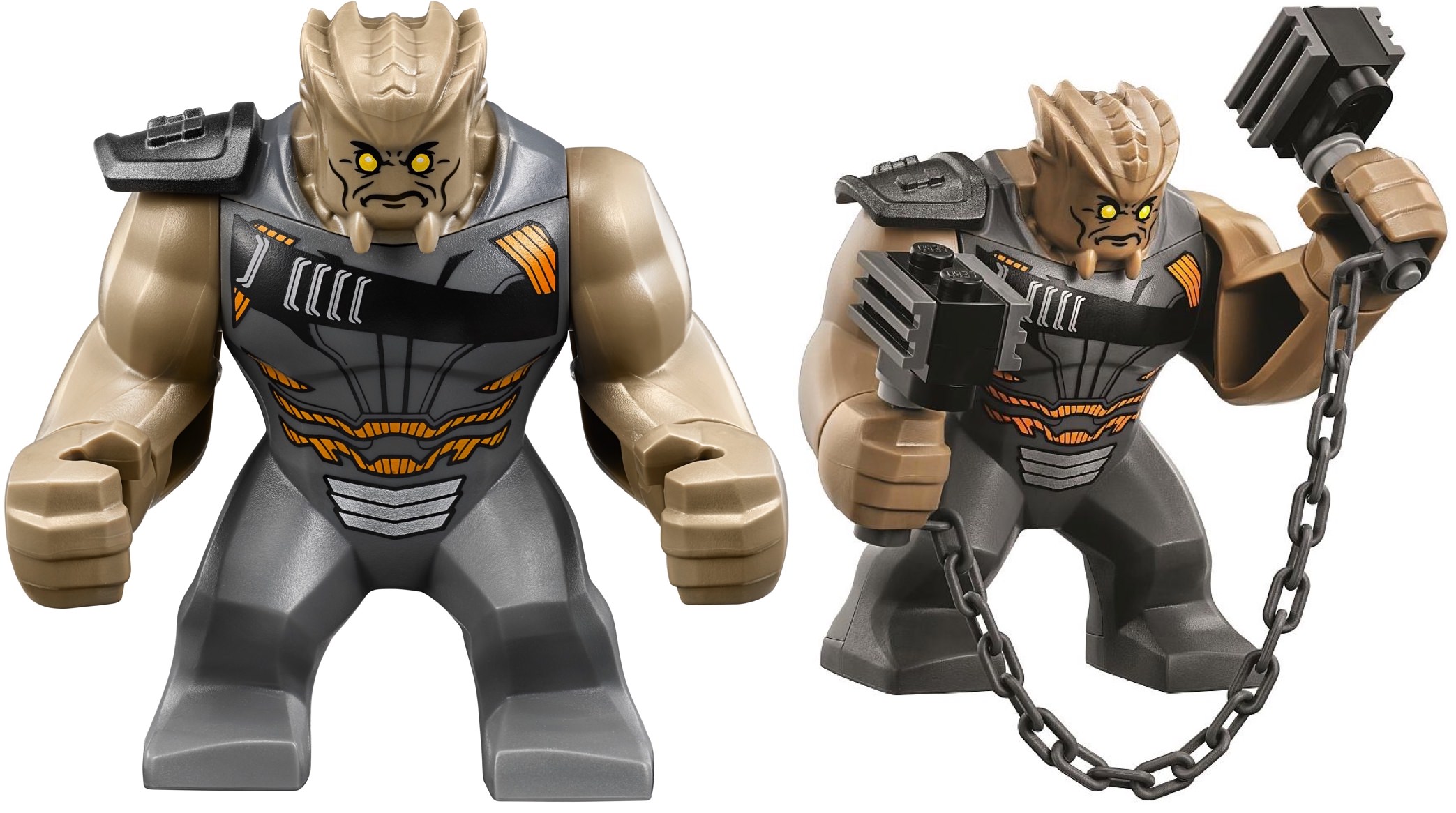 The final figure is a bigfig, Cull Obsidian. He, too, is a member of the Black Order, and looks pretty good! Unfortunately his arms and head is a bit devoid of texture (especially since Cull is very scaly in the movie) and his legs look pretty plain too. He has two weapons that are chained together with a long chain.

The five figures included are pretty neat (except for you Iron Spider!!!) but like 76107, it feels like one minifigure is missing. You know who should have been in this set? Wong. We really need a LEGO Wong. I mean, the dude seems pretty cool. The Sanctum’s a bit empty with only one inhabitant, and Wong had a decent-sized role in Dr Strange and is on the Infinity War poster so I think he deserves a minifigure.

The Infinity Stone of the set is – you probably already saw Dr Strange holding it in the image above – the Time Stone. Interestingly, this is the only LEGO Infinity Stone to have a clear stand and not a gold one, which I think I actually prefer. It’s translucent light green and comes in a sprue of four. Interestingly, like the Mind Stone, this Infinity Stone is also present in print form, via the Eye of Agamotto print on Dr Strange’s torso. 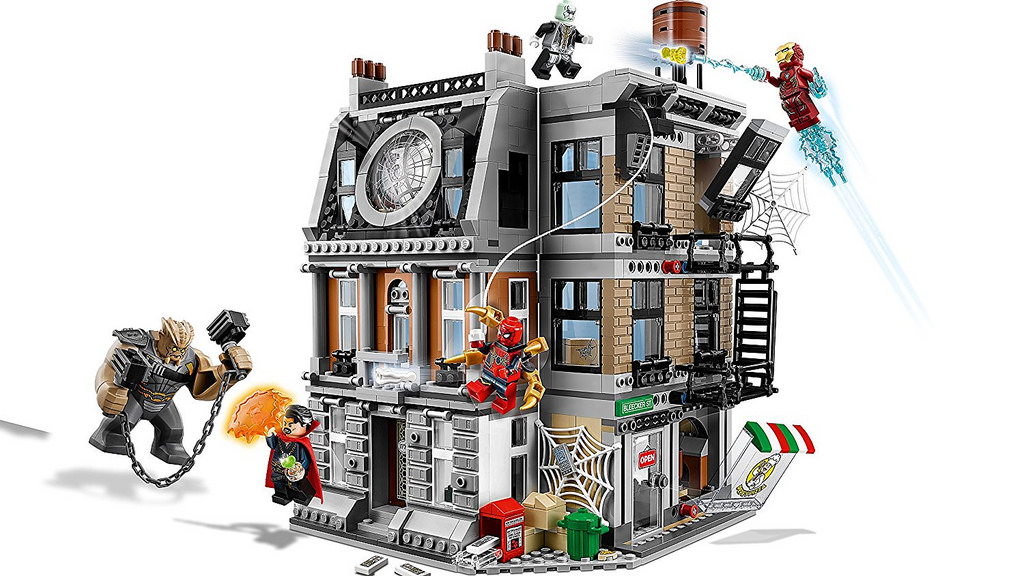 The build of the set is a street corner. It depicts the Sanctum and Peter Parker’s apartment conveniently next to each other. 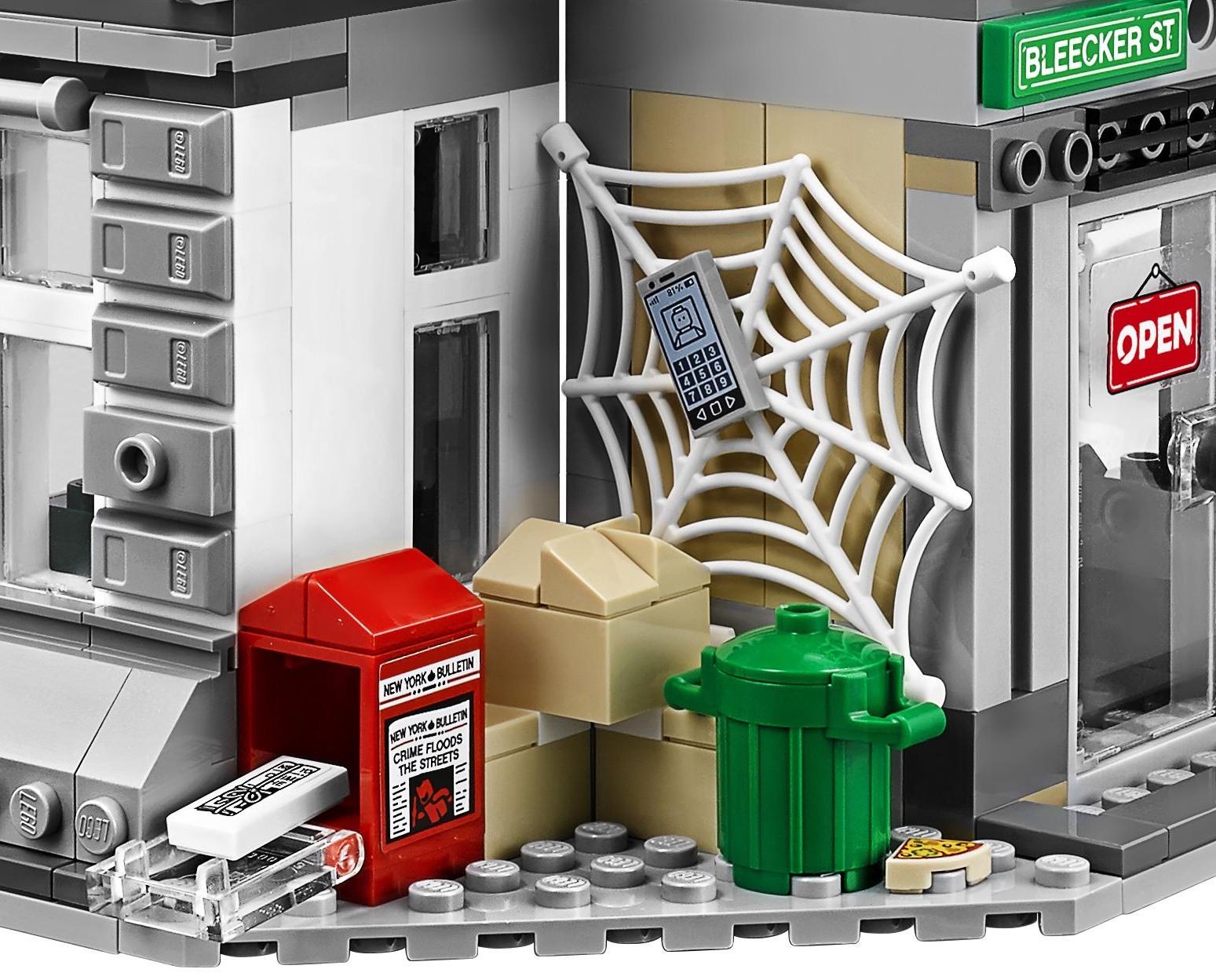 The two buildings are on hinges so you can position them the way you want – back-to-back so it’s fully enclosed like two parallel streets, at a 90º angle like most of the official photos show, or side-by-side with a fully exposed back for better access. When you hinge it at a 90º angle, you can attach this little corner plate piece. There’s a mailbox with a Daredevil easter egg and three stickered newspaper bundle tiles. There’s also a couple of opened cardboard boxes, a green garbage bin, and a quarter pizza tile on the floor. There’s also a spider-web with a phone attached (probably Peter’s tbh). This corner plate piece is detachable so you can hinge the buildings side-by-side. 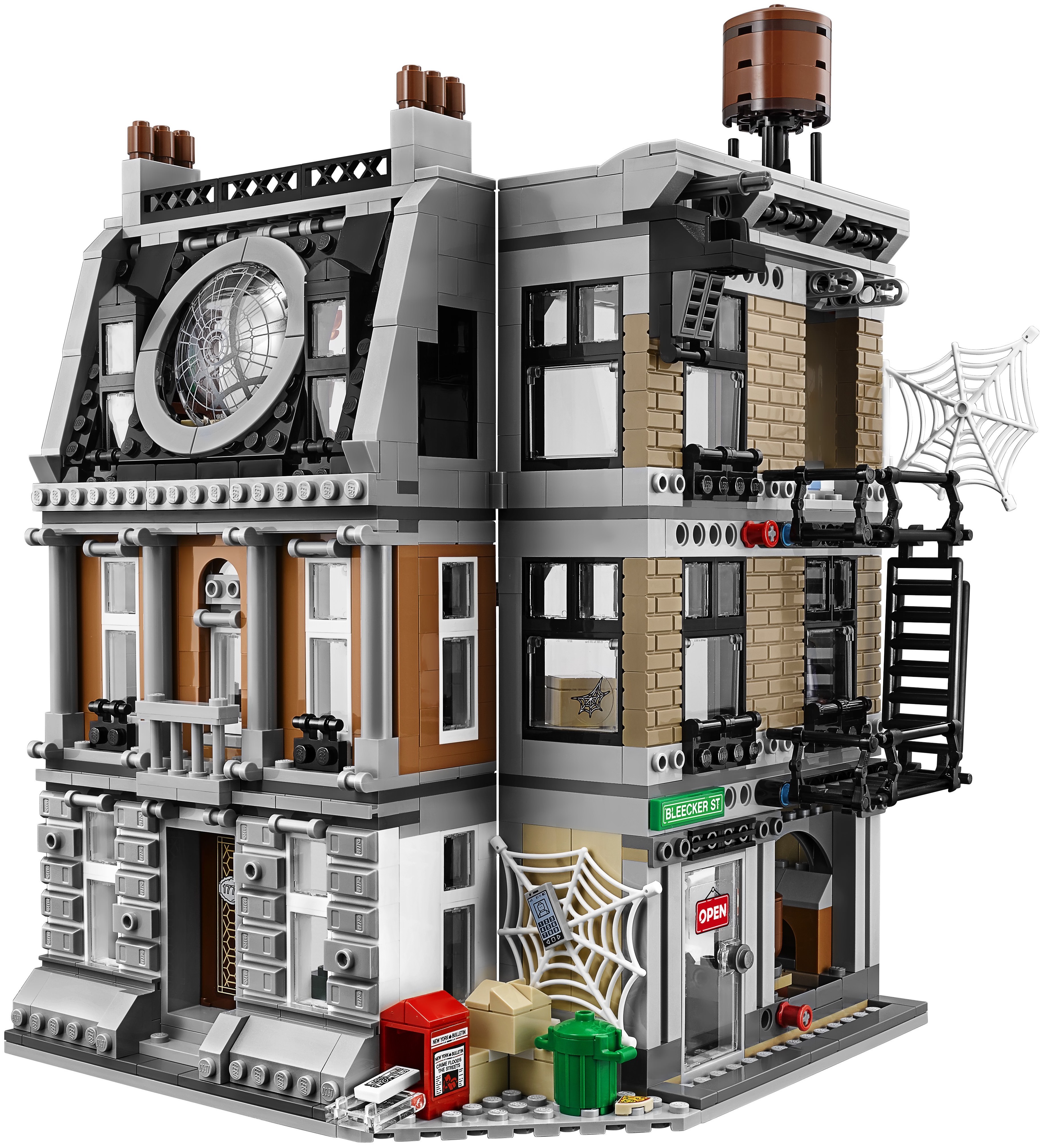 The exterior of both buildings looks good. The lowest level of the Sanctum has some ingot pieces and jumper plates (presumably for posing minifigures) in grey against a white background. The middle Sanctum floor is dark orange with some nice grey ornament highlights. The top floor of the Sanctum is sloped backwards and has the iconic Sanctum window design printed on a 6×6 translucent clear dish piece (also used on TIE Fighters and turret tops and the backs of escape pods). The apartment building has a pizzeria on the lowest storey, some nice dark tan brick detailing on the second and third floors, and a water tank on the top. 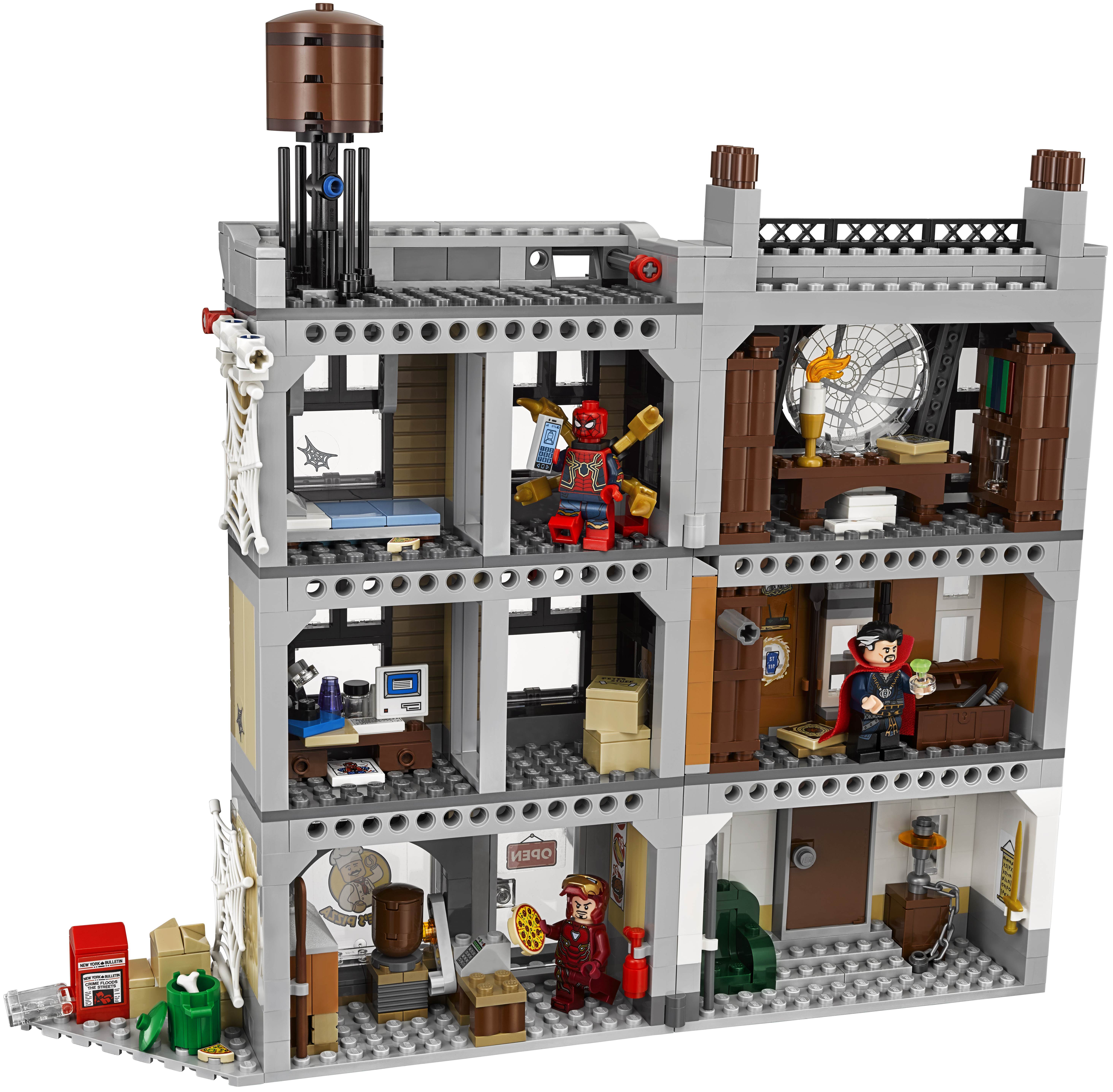 Now we go on to the interior, which was a big mystery when images of these sets first revealed. I was a bit disappointed when I first saw the interior, for a number of reasons: 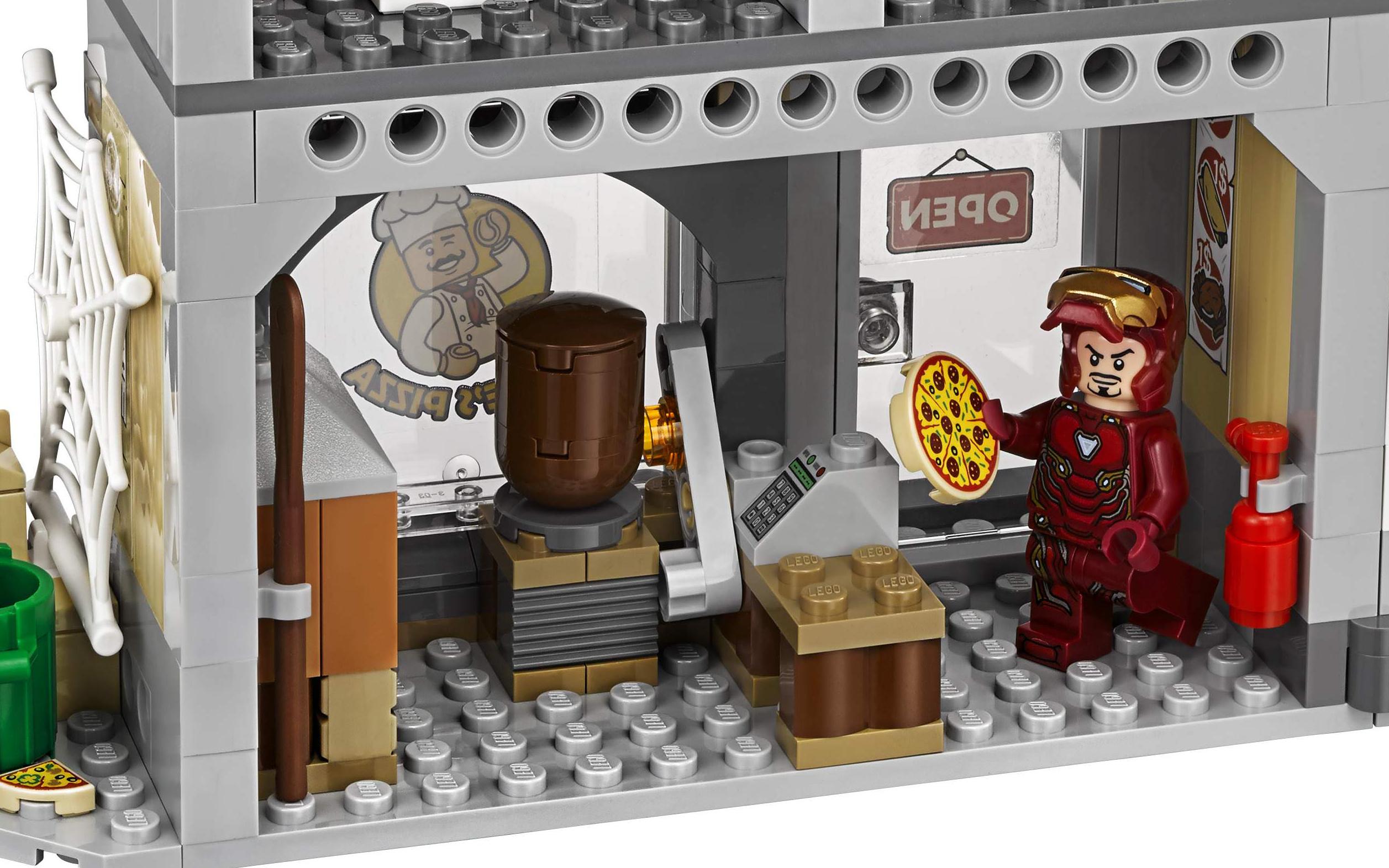 Anyways, let’s examine the rooms one by one. Here’s the interior of Pepe‘s Pizza (apparently there’s a pizzeria called Pepe’s Pizza in New Zealand… huh). The official LEGO set images show Tony Stark eating pizza inside, which fits with Tony Stark’s (really RDJ’s) appetite throughout the MCU. There’s a pizza oven with space to put the pizza inside, along with a shawarma machine and a cash register. There’s one clip on each side of the wall – one has the paddle for the pizza oven, the other has the long-running gag of the superhero fire extinguisher. That lever next to the shawarma machine activates a play feature.

There’s a red bushing outside the restaurant. Push it inwards, and the grey lever knocks out the window with the Pepe’s Pizza sticker. 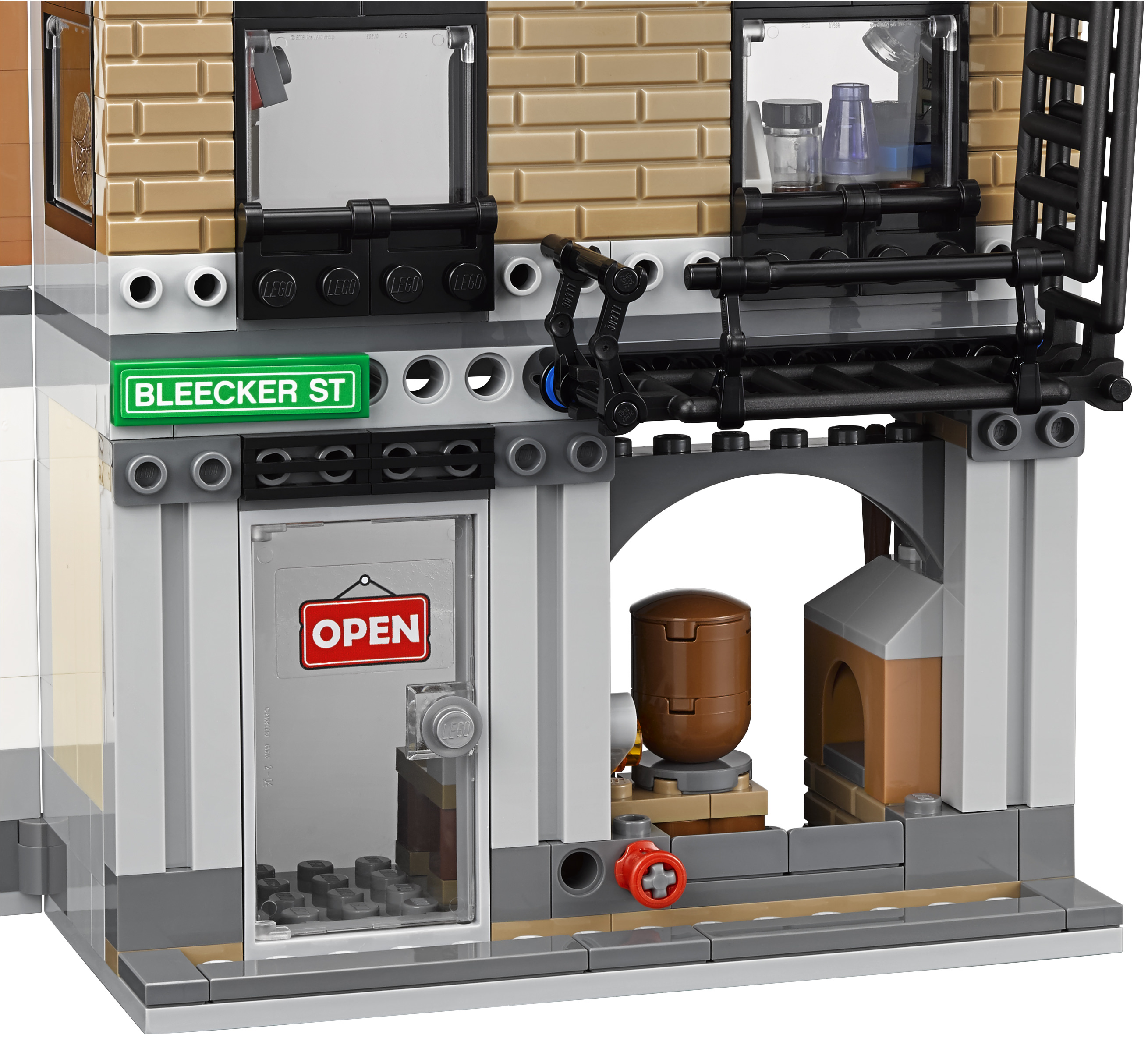 So now you have a hole in the wall for the Black Order to enter the pizzeria. Wait, seriously, guys? The sign on the door literally says “OPEN”. 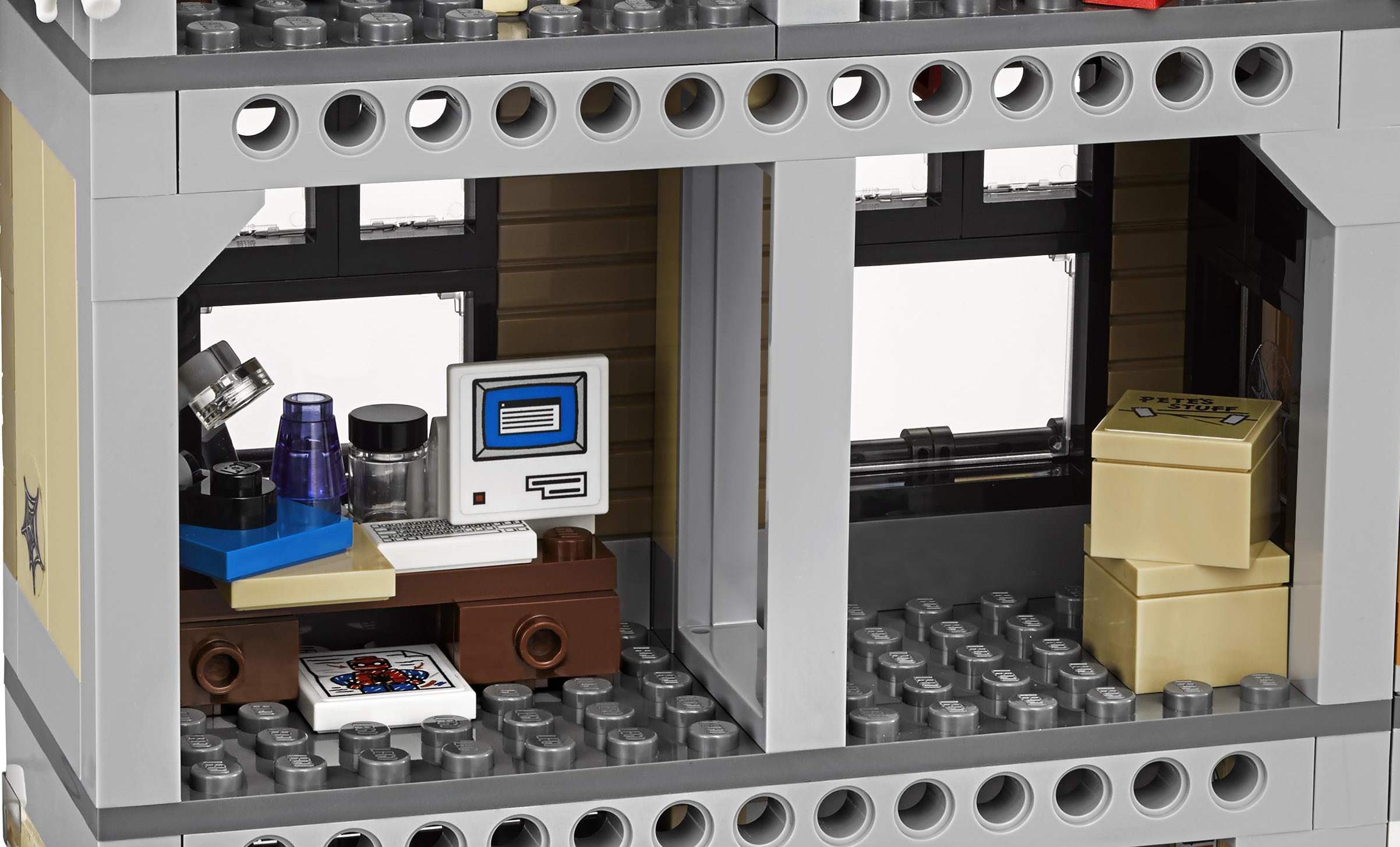 Now we go on to the first floor of Peter’s apartment. There’s a study room for Peter Parker on the left. It has a brown study table with a white computer, a jar, a Chitauri tech egg from 76083 Beware the Vulture, and a lamp. There’s also a sticker on a 2×2 tile on the floor showing the blueprints for the homemade Spidey suit. It’s an okay build but it’s odd that there’s no chair, and the computer is built weirdly – an odd computer body that has tons of gaps and partially covers the offset keyboard.

On the other side of the room is a couple of cardboard boxes. The top box has a sticker that says “Peter’s Stuff”. 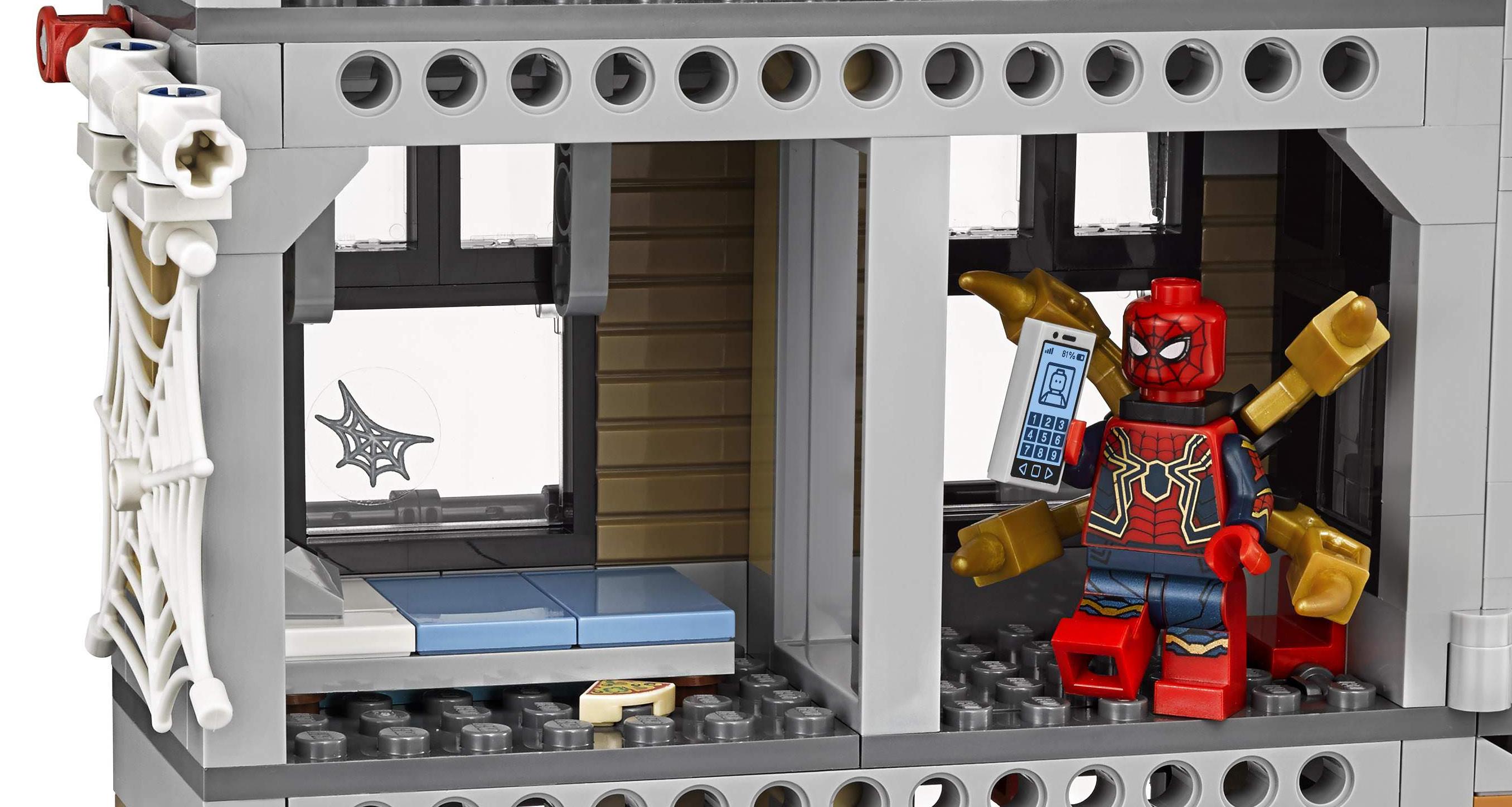 The top floor has Peter’s bedroom. The bed is 3×6 in size, and uses some 2×3 tiles well. There’s a quarter of a pizza on the floor underneath – Peter is unhygienic. There are a couple of play features in this area. 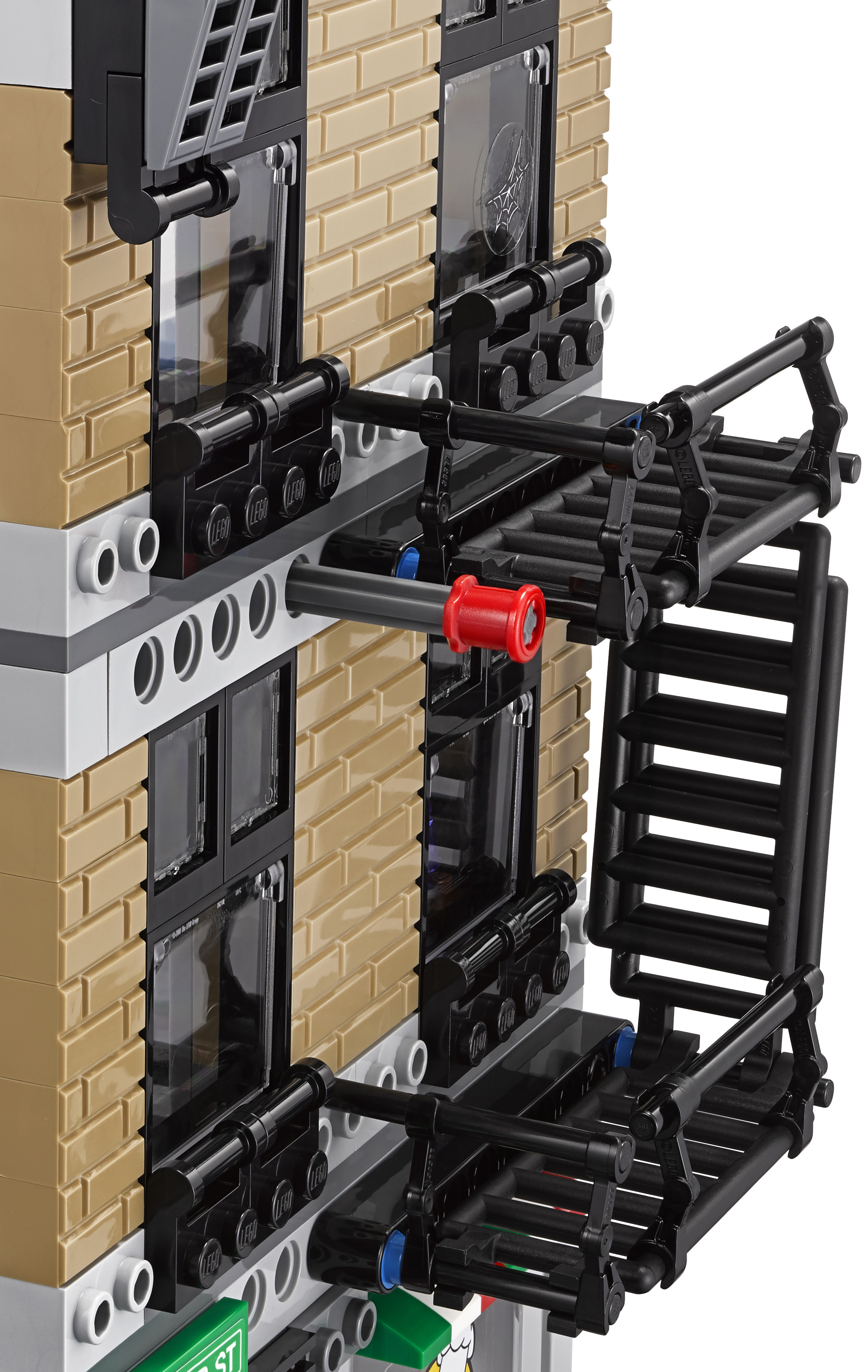 The area Iron Spider was standing on in the previous shot is actually a trapdoor. Pull out this red bushing on the outside of the building… 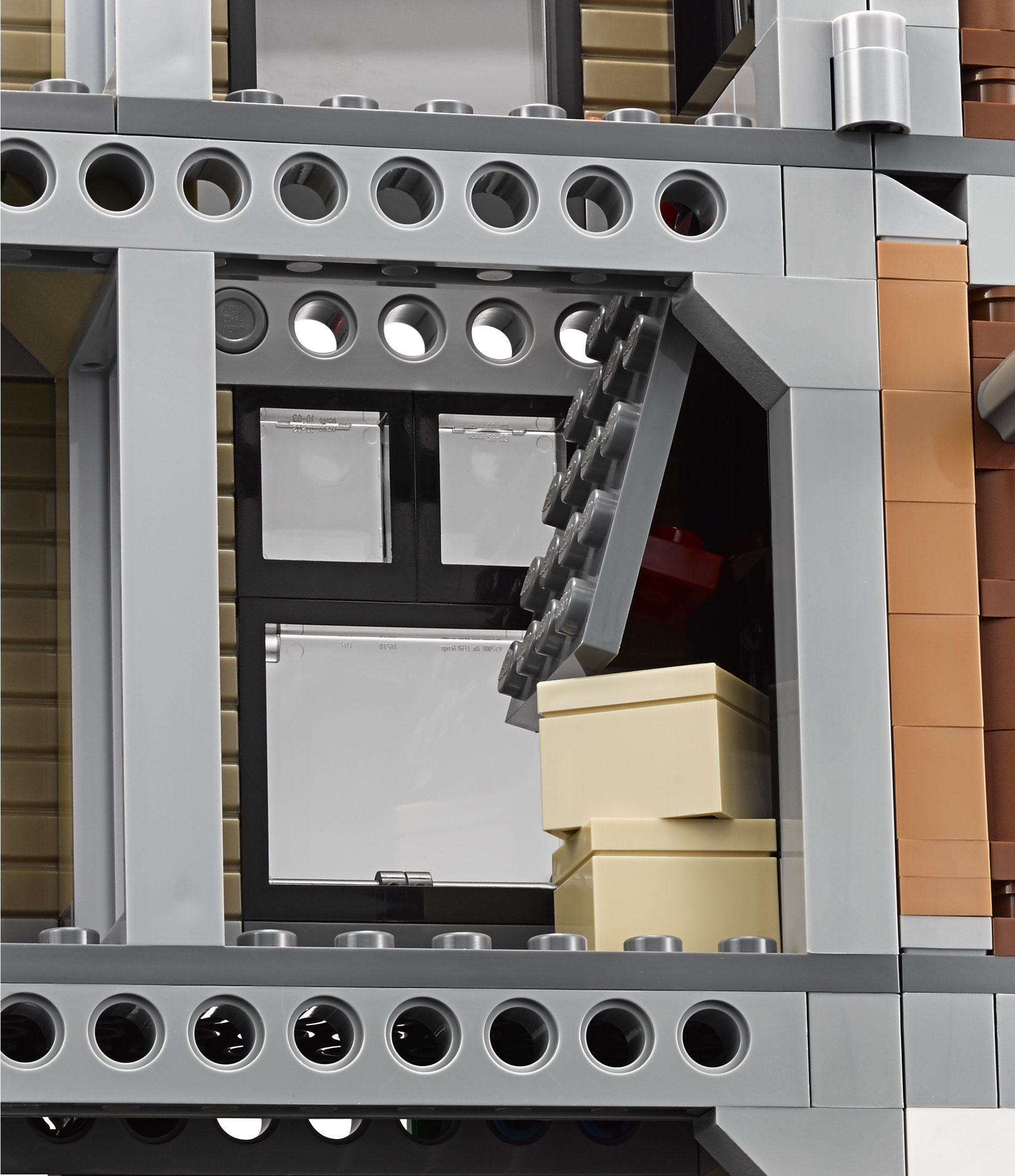 …and the trapdoor drops you down… into Peter’s study room. I dunno, it seems like this trapdoor isn’t super effective if you ask me. 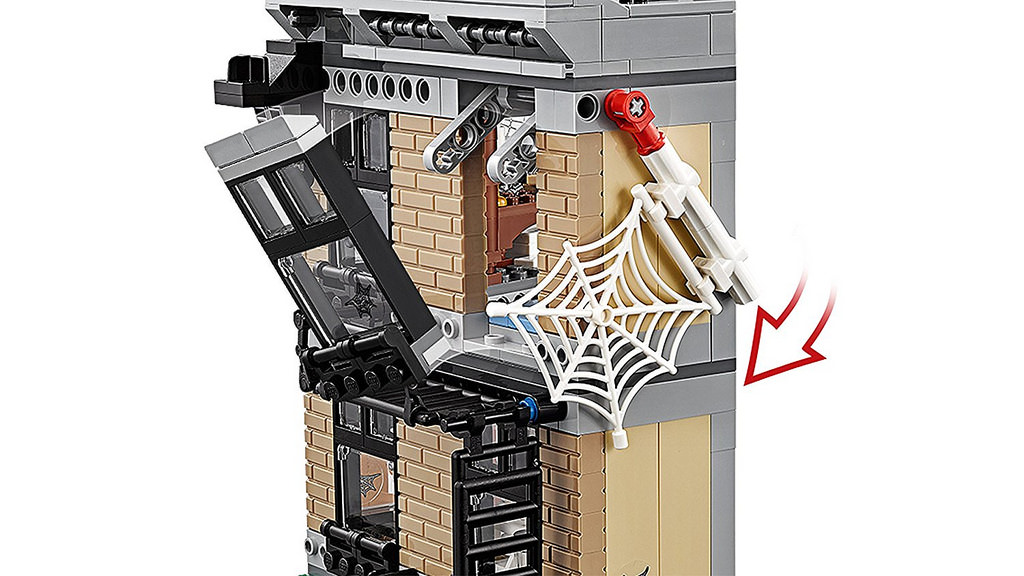 There’s also the second breakaway window of the set – push down on the web build outside and it smashes the window out. It feels right but doesn’t look too good, especially with the red Technic piece and the grey half-beams. 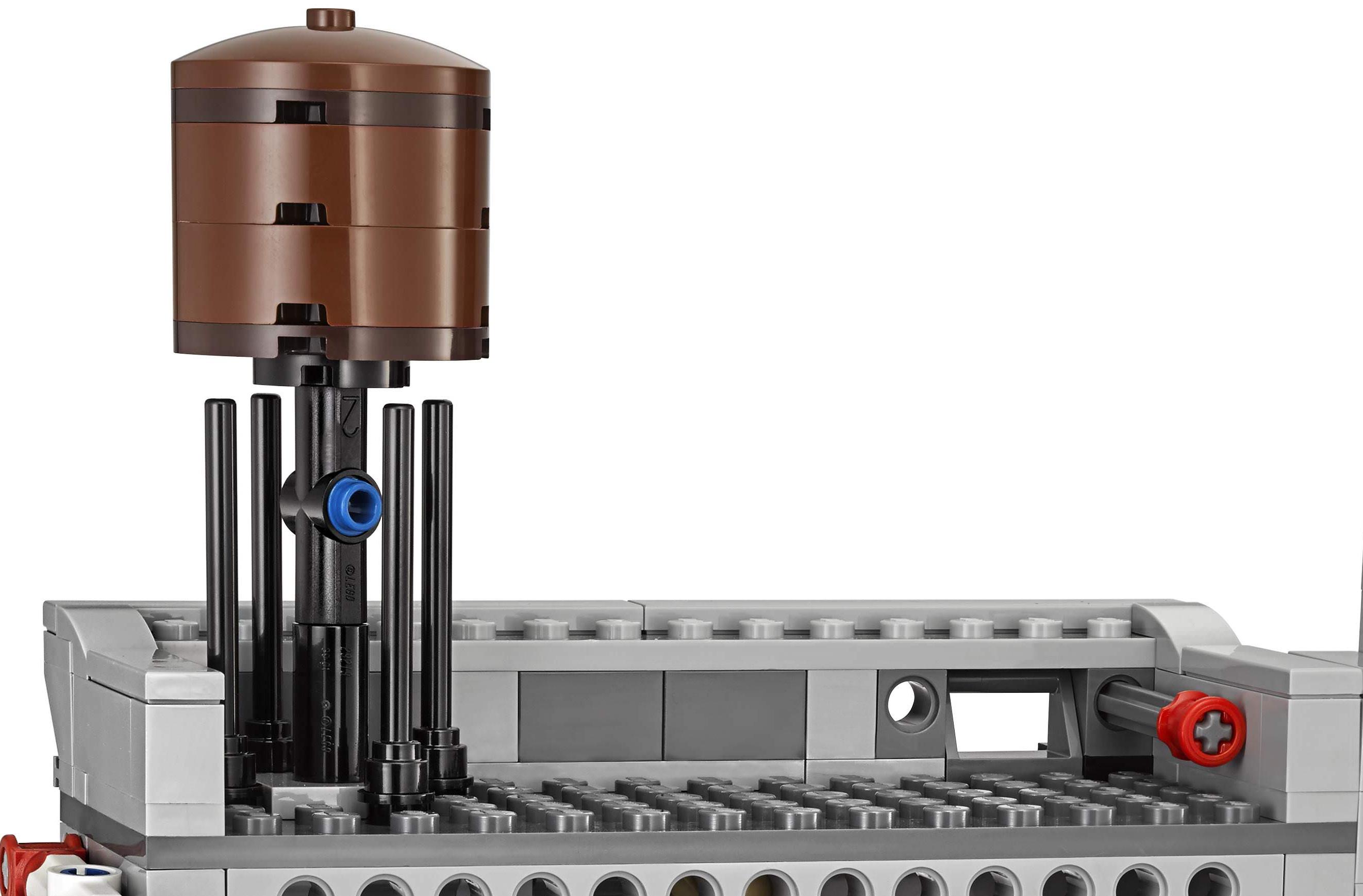 The rooftop has some space to put minifigures and a water tower. 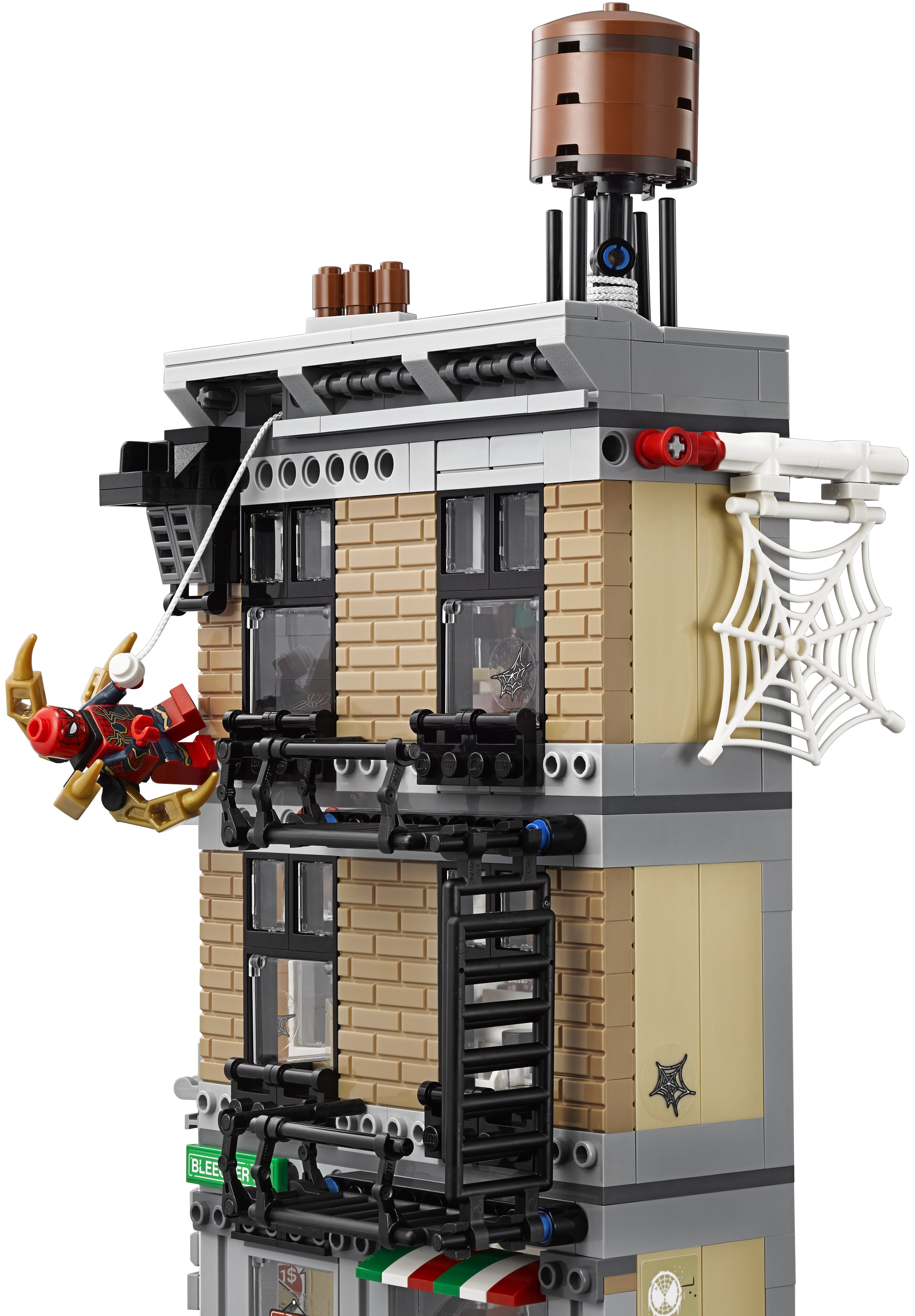 Instead of tying up the Black Order with it, you can take the white web string included and attach it to the water tower’s stud. Then, by turning the water tower, you can use the water tower like a winch and pull Spider-Man upwards. If you let go of the tower, it slowly lets Spidey down too, which looks good. 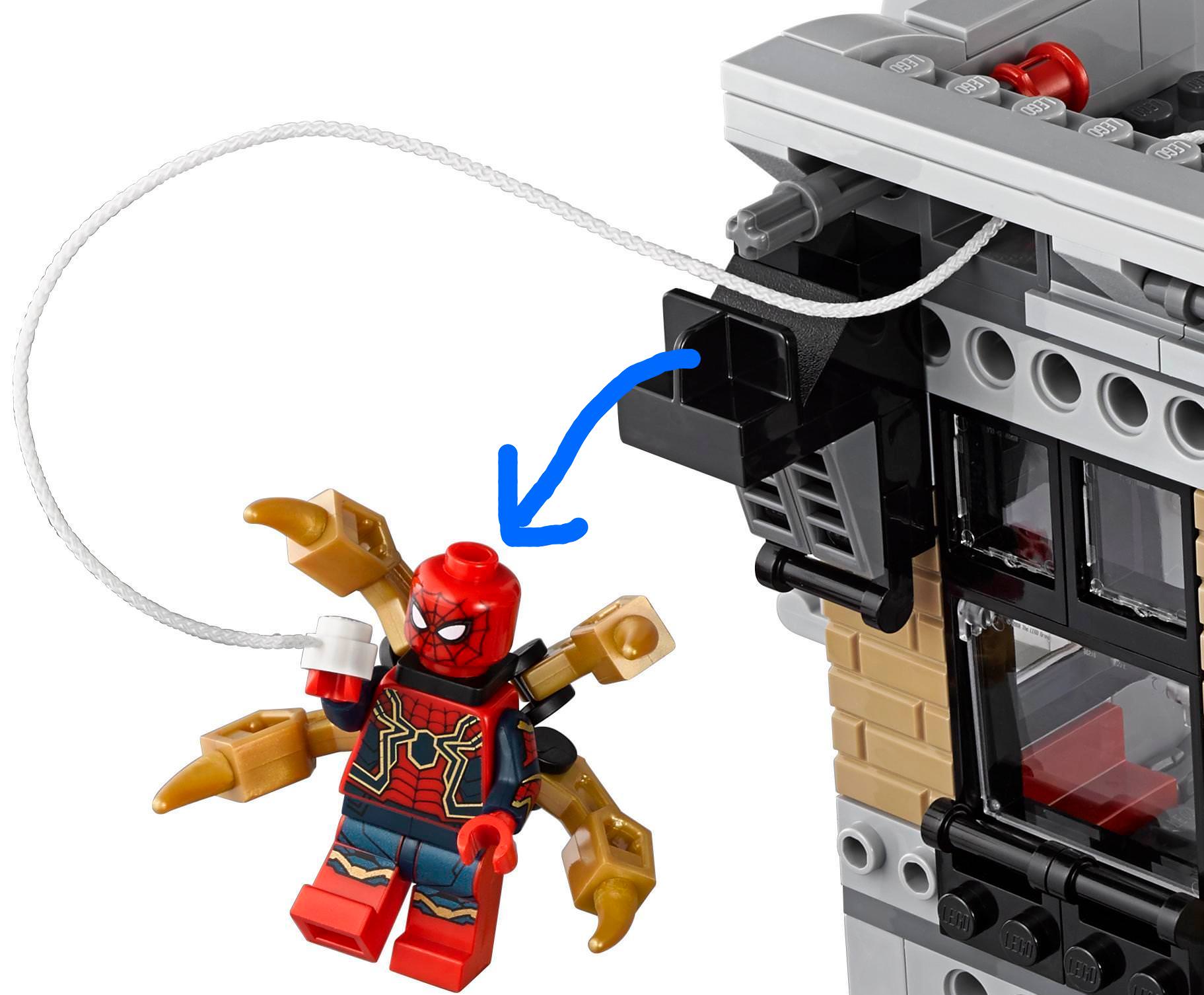 There’s also a ledge sticking out of the left side which is disguised as a vent. There’s a red bushing on the inside which when you push, Spidey jumps off the ledge. If he’s holding onto the web, he gets slowly let down. If he’s not… R.I.P. ☠️ 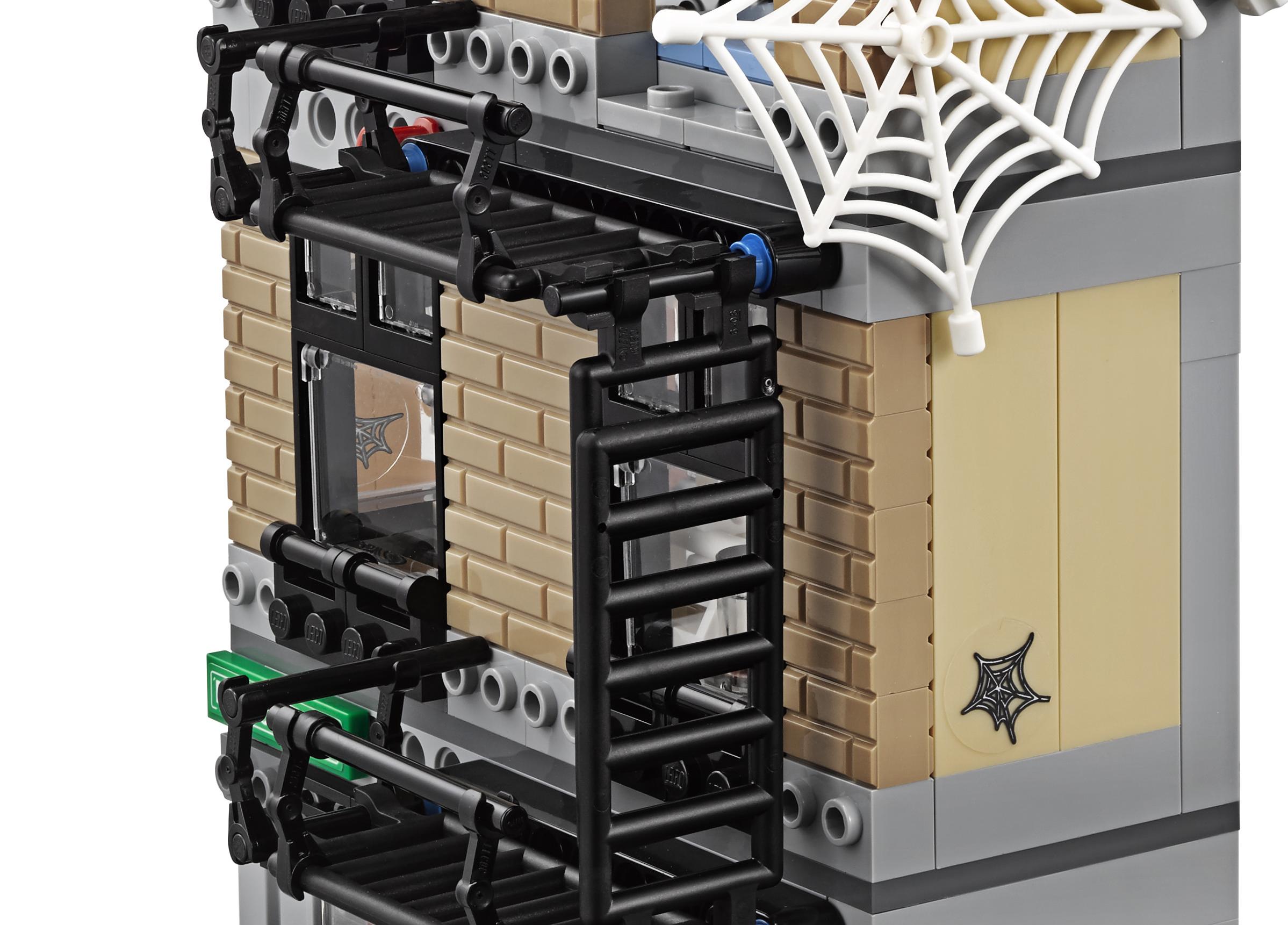 There are also some fire escape pieces. They are formed using ladders and bars and look surprisingly good for an official LEGO set. You can put minifigures on them, though they’re balancing as they’re not attached with any studs. 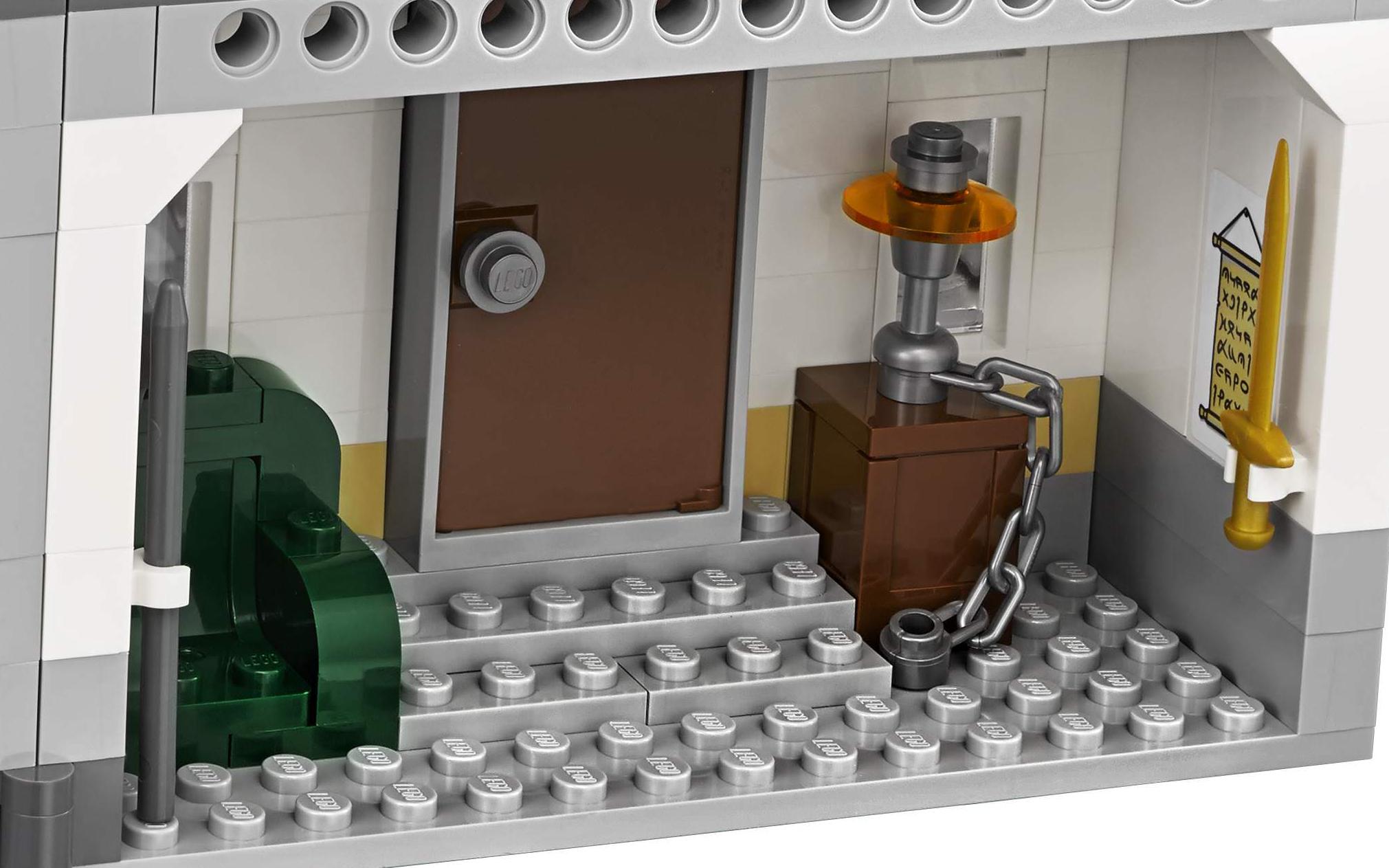 Now we move on to the Sanctum. The lowest storey is the waiting area. It has a dark green chair (built around the regular LEGO chair mold) and a crate with a lamp on the other side. The brown door leads outside, and there are some stairs leading into the room. A couple of clips are also present – one holds an axe, the other a golden sword. 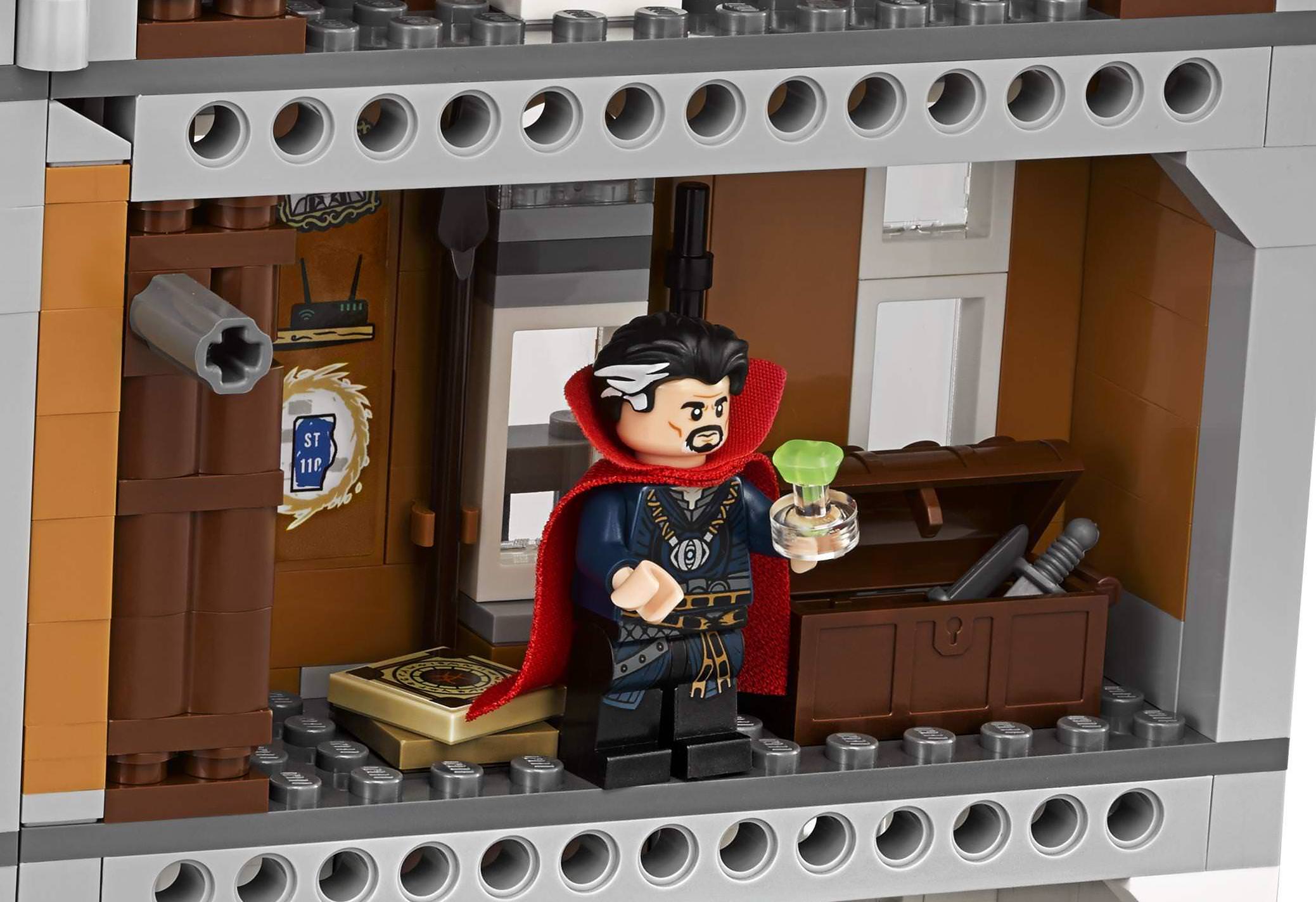 The middle floor of the Sanctum has some more strange (ha!) stuff. There’s a stickered 2×2 tile on the floor (clean up your room Dr Strange), a brown chest with two grey daggers inside, and a bookshelf on the other side. 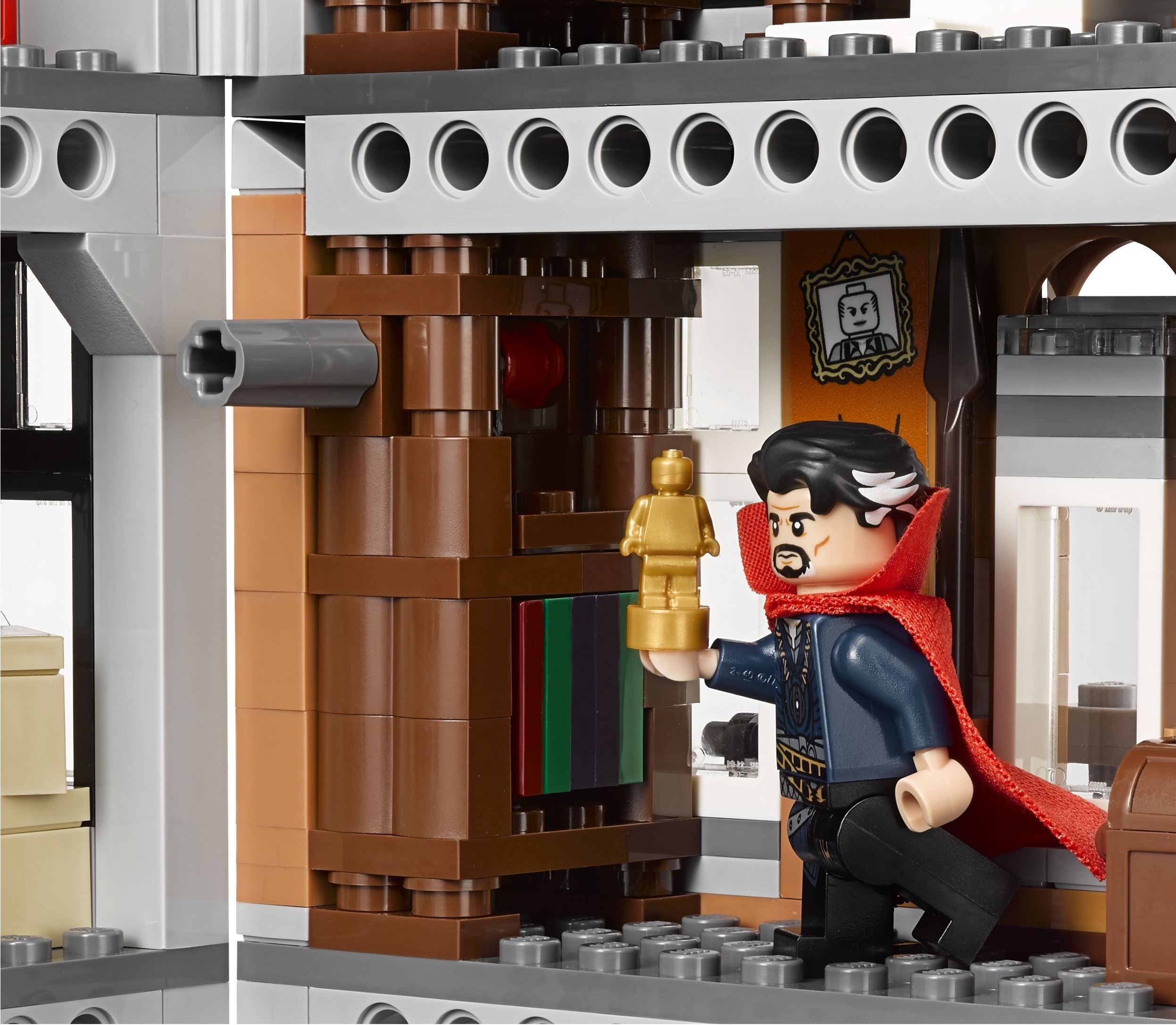 There’s a stickered wall panel on the back which has a photo of the Ancient One at the top. The bookshelf has some books and a golden trophy (Dr Strange’s Oscar?), as well as a suspicious-looking Technic connector. What does that do? Well, in order for it to work properly, the buildings must be put at an angle of at least 90º. Then, when you turn it… 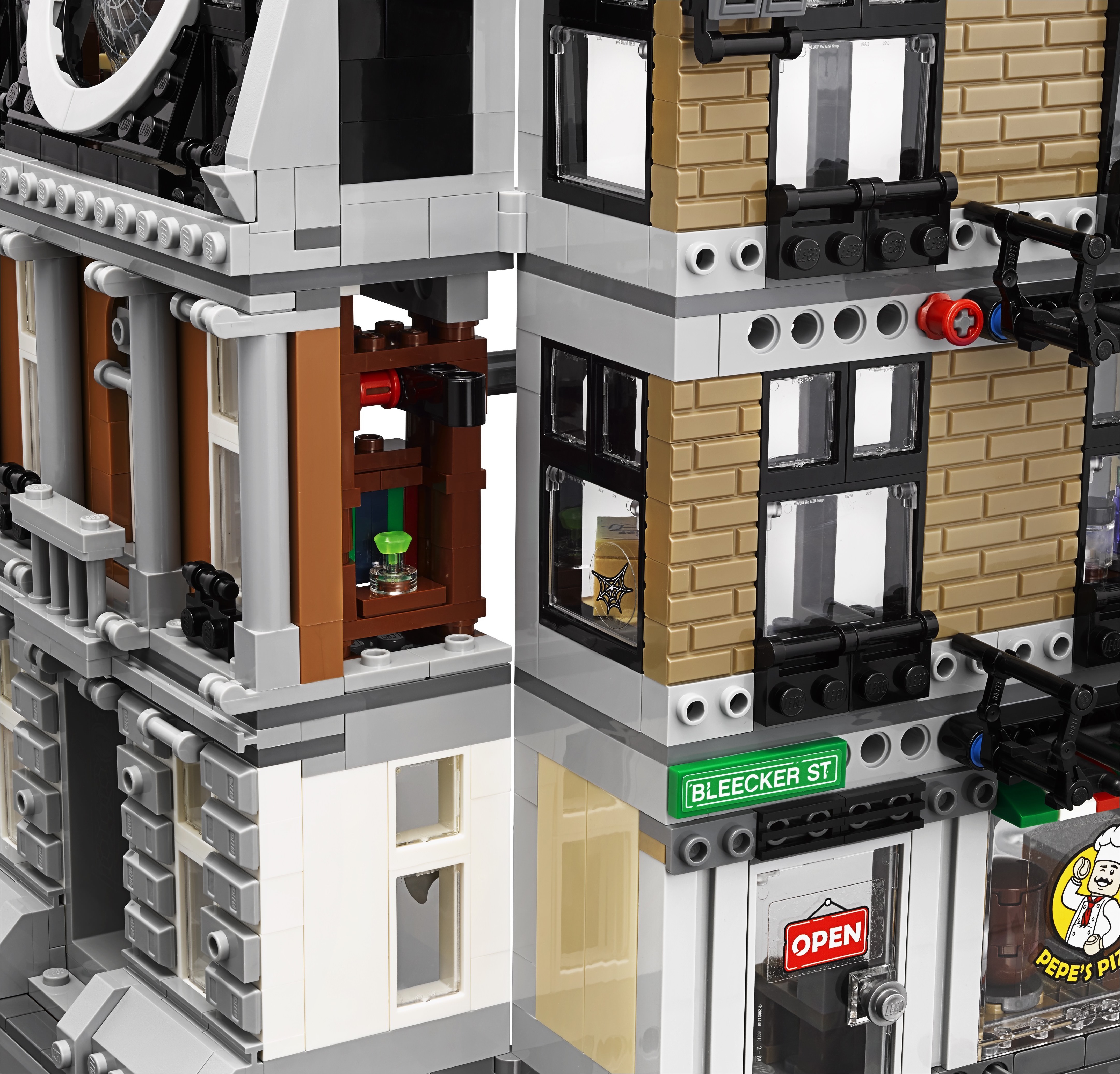 It blasts another window panel out, revealing the Time Stone in the back of the bookshelf. Now it’s up to Ebony Maw and Cull Obsidian to get it!

(Really, it’s LEGO Dr Strange’s fault that he put a freaking Infinity Stone in the back of a bookshelf. facepalm) 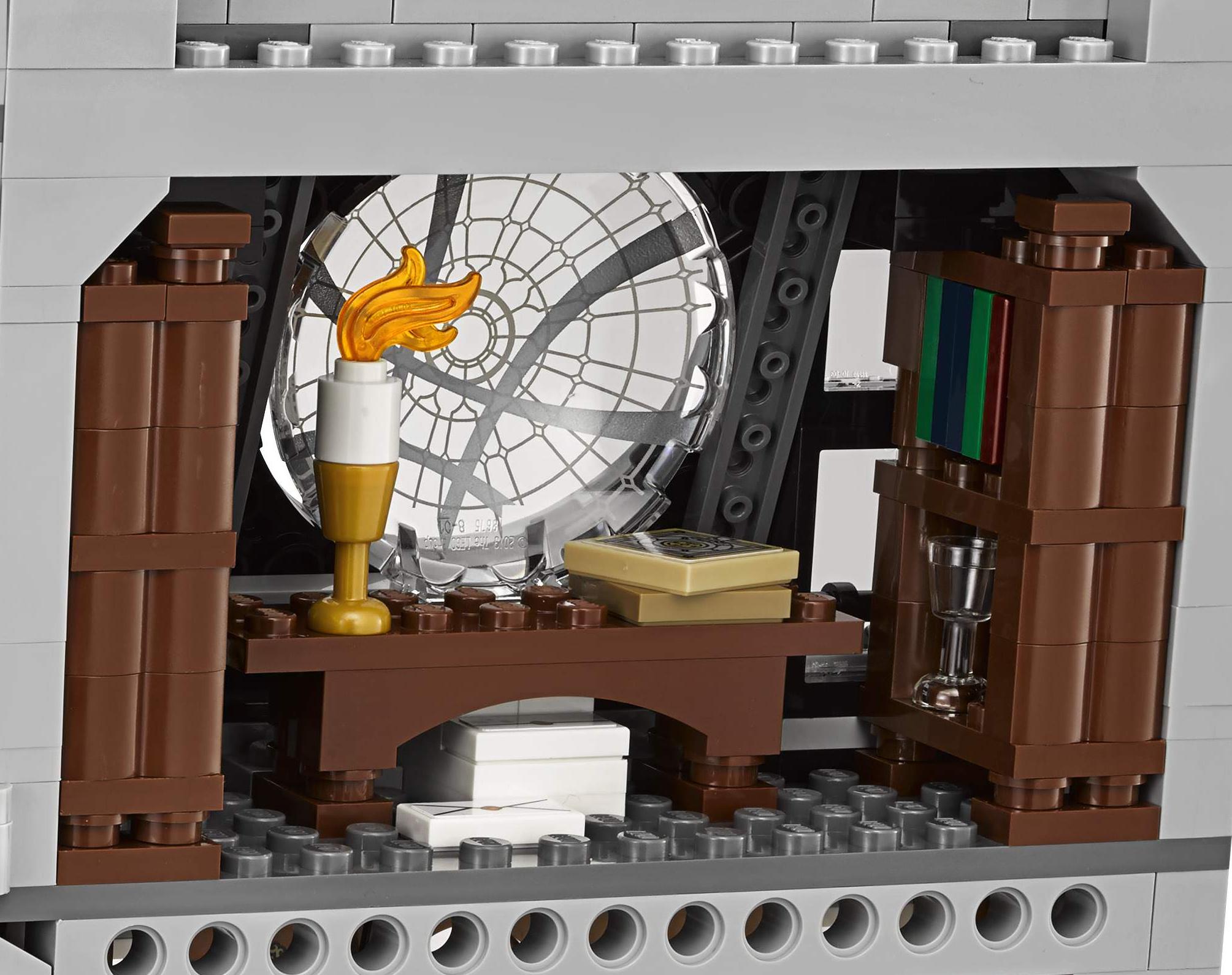 The top storey of the Sanctum is Dr Strange’s study. It has the iconic printed window at the back, along with two bookshelves. In the middle is a table with a candlestick and a stickered tile that shows some magic-like design. Underneath the table are a ton of envelopes – there are two stickered tiles showing envelopes, though it does make me wonder why LEGO didn’t use the printed envelope tile instead. You can put Strange up here, though he doesn’t have a lot of space to stand.

Okey dokes, that’s the set! What do I think about it as a whole? Well, I’m a little disappointed. The build looks really good and substantial from the outside and box images, but the interior is actually quite shallow, which limits playability. The play features are fun and work well, but more depth would have helped it tremendously. The minifigure selection is not bad (except for Iron Spider) but one more minifigure would undoubtedly have helped it. Finally, the price is a little bit too high – $99.99 USD, $169.99 AUD, and $199.99 NZD is too expensive for a set this shallow, though £89.99 GBP is a bit more reasonable. If you ask me, I think the RRP should have been £84.99 GBP, $89.99 USD, $149.99 AUD, and $169.99 NZD.

Ah well. Thanks for reading! Let me know what you think in the comments below. I’ll also drop a render of the LDD file of this set so if you want the file you can always contact me. 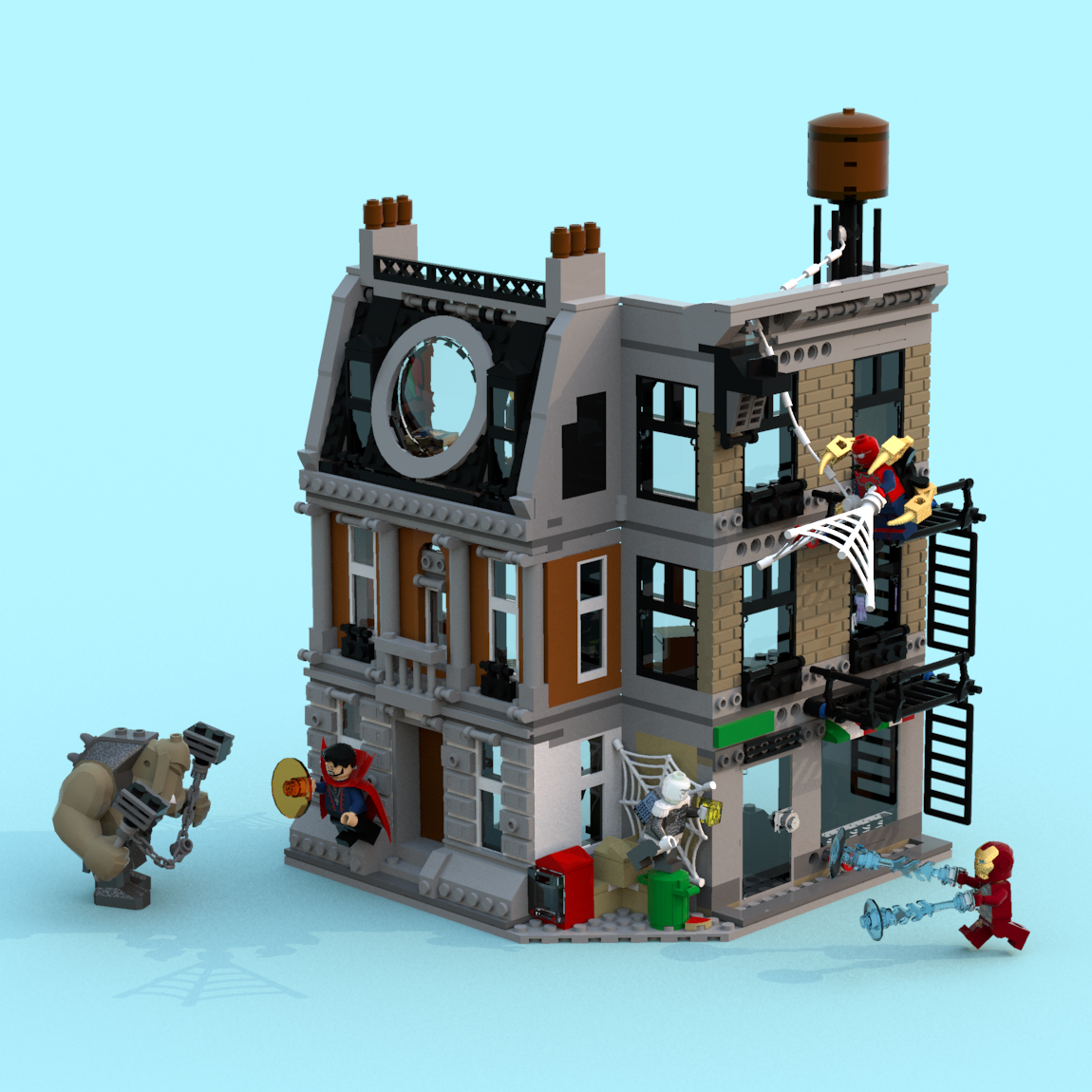 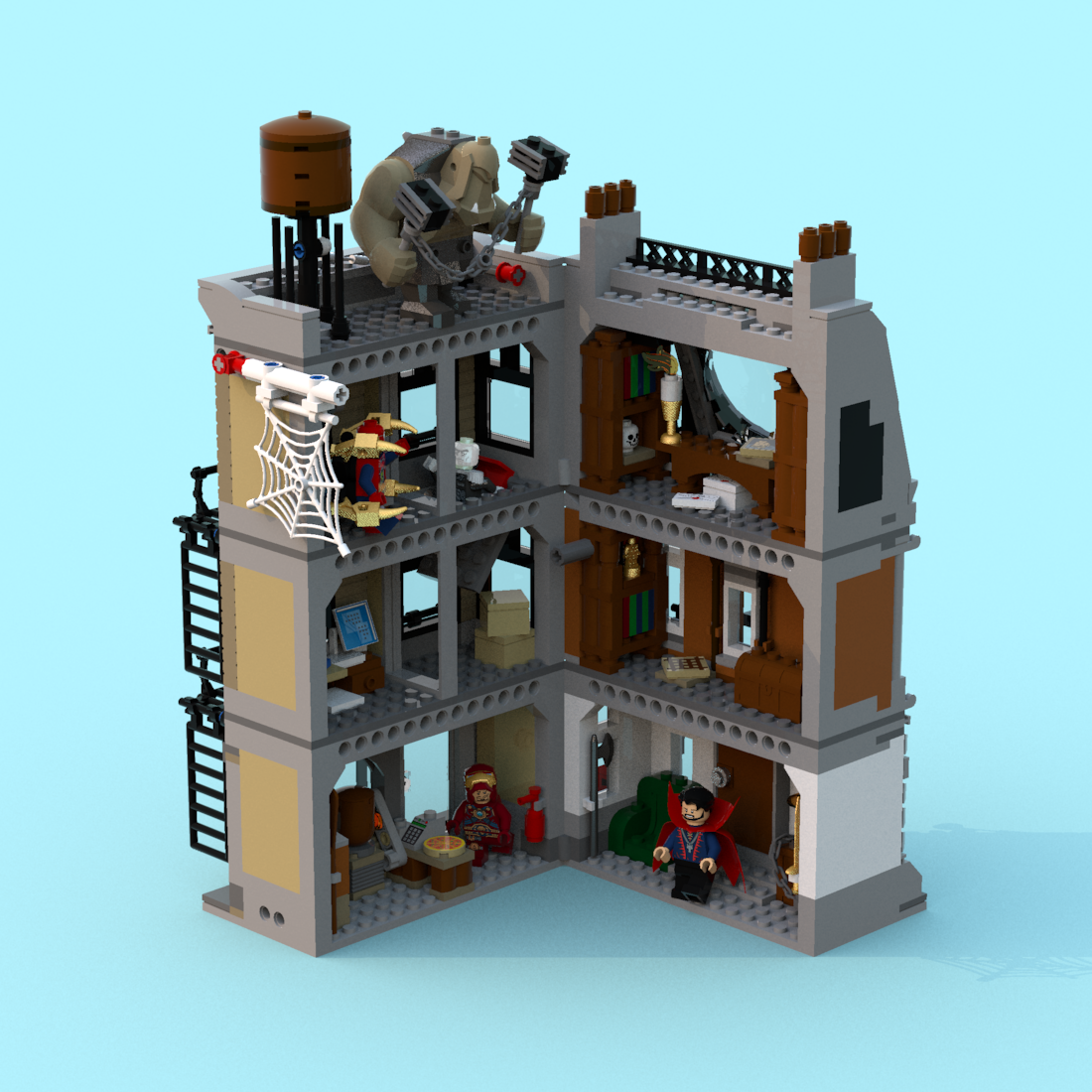