Shocker: The first minifigure in a set called “Han Solo’s Landspeeder” is… Han Solo! What?! Just kidding, it’s a no-brainer. This is the new Han Solo for the anthology movie, played by Alden Ehrenreich who isn’t the best choice for Han in my opinion. This minifigure in particular might be from a flashback scene, as does the entire set – we’ll find out when the movie comes out. Han has his hairpiece which first appeared in 75159 UCS Death Star and a new double-sided face produced exclusively for this movie’s set wave.He wears a dirty white jacket over a grey long-sleeved shirt, and has dark tan gloves. He is armed with his trusty blaster pistol. His pants are black and have a gun holster and lots of dirt. They’re like, really dirty. He’s a nice minifigure overall I think but the brown-jacket version in 75212 Kessel Run Millennium Falcon is a better minifigure as it looks like Han will wear that for longer in the movie.

The second minifigure is Qi’Ra, portrayed by Emilia Clarke. She has a new double-sided head which I think looks decent – not a whole lot like Emilia Clarke but good enough. She has a new hairpiece which looks pretty nice and can be used on other minifigures if you like. Her jacket is silver-colored which looks good in my opinion, and has a printed fur lining over a dark red shirt underneath. Her pants are dark grey and she wears black boots, both of which are very dirty. Unfortunately, her legs are not dual-molded, which means that her legs look very odd when viewed from the side. LEGO really needs to start using dual-molding in the Star Wars line. Qi’Ra’s weapon of choice is a blaster pistol.

Finally, there’s a Corellian hound included. This is a new mold for the Solo movie, and also appears in 75210 Moloch’s Landspeeder too. One hound is included. It’s actually a pretty small mold, and spans two studs. It has some nice printed and molded detail too.

The two minifigures (and the hound) included are nice, but for this price at least one more should’ve been included. Oh, and Qi’Ra’s legs should have been dual-molded. 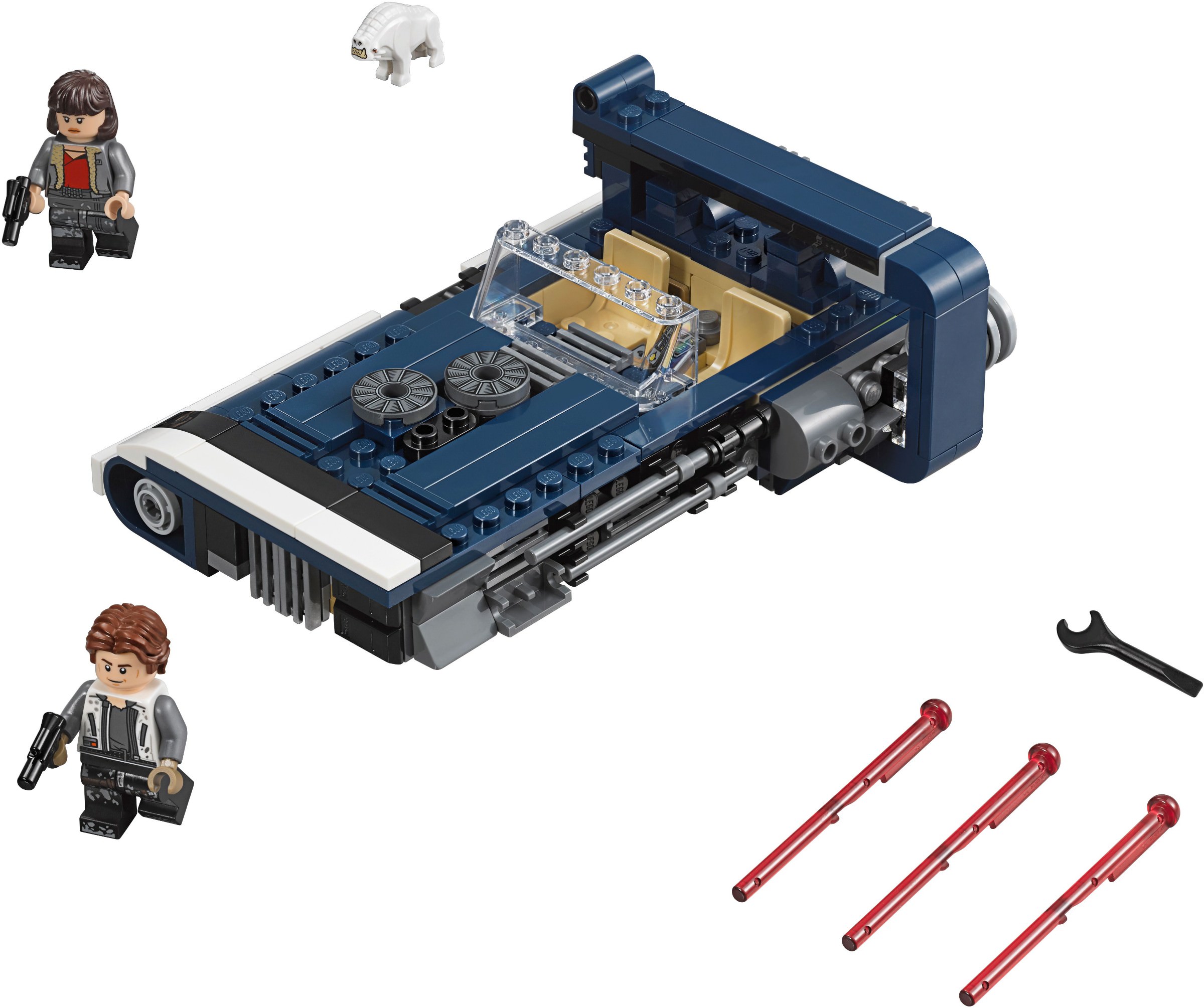 There’s only one build included, which is… wait for it… Han Solo’s landspeeder. <mind blown> Nah just kidding, it’s another “no shit sherlock” moment. It’s a blue M-68 landspeeder. 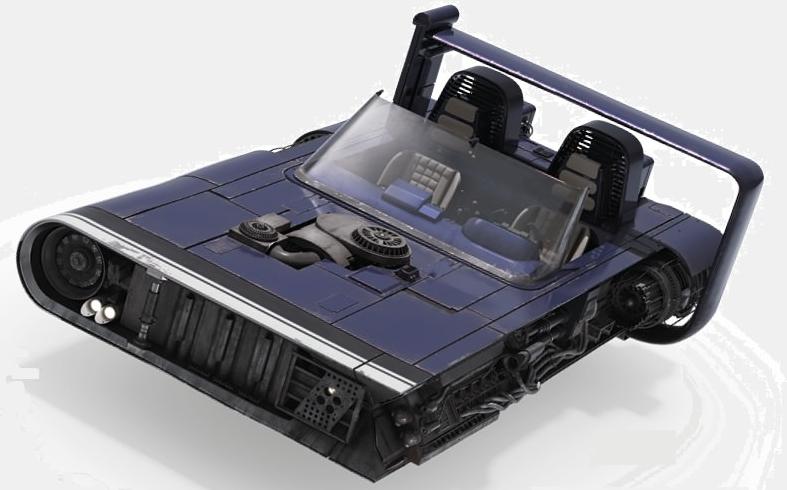 You can see the movie version here. I think LEGO has done a reasonable job in replicating the shape, especially considering how thin the wing at the back is. 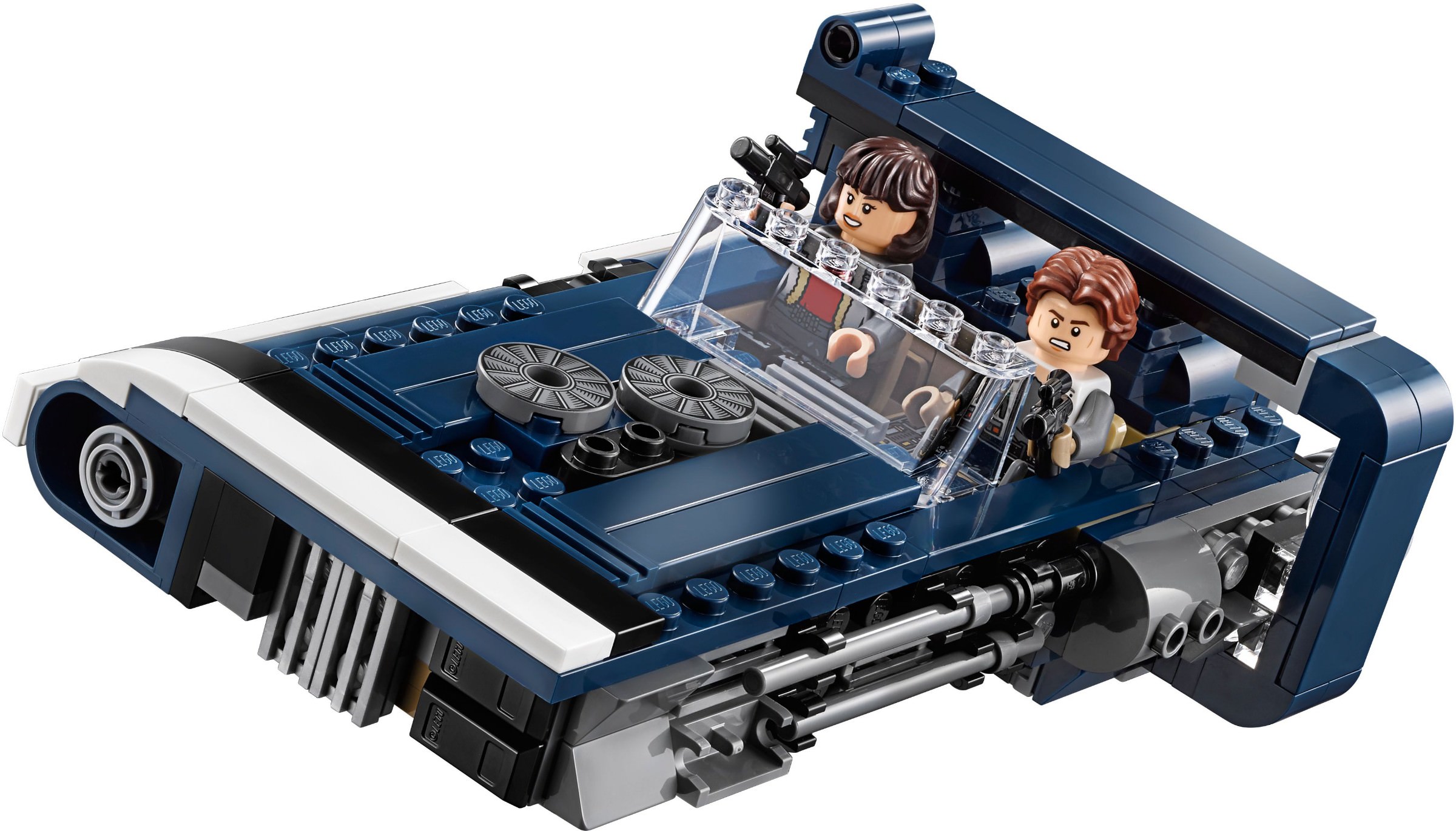 Han and Qi’Ra can sit side-by-side, just like in the film. They have a windscreen in front of them which is narrower than the speeder’s body so looks a little odd IMO, though that is actually accurate to the movie version. The exposed studs on top of the windscreen look kind of strange too, but adding stuff on top would reduce the sleekness of the piece. There’s some exposed mechanical details on this side of the speeder, replicated with bars and other greebling parts, while the other side has a white-colored stripe. The front has more mechanical details as well as an engine fan at the left. 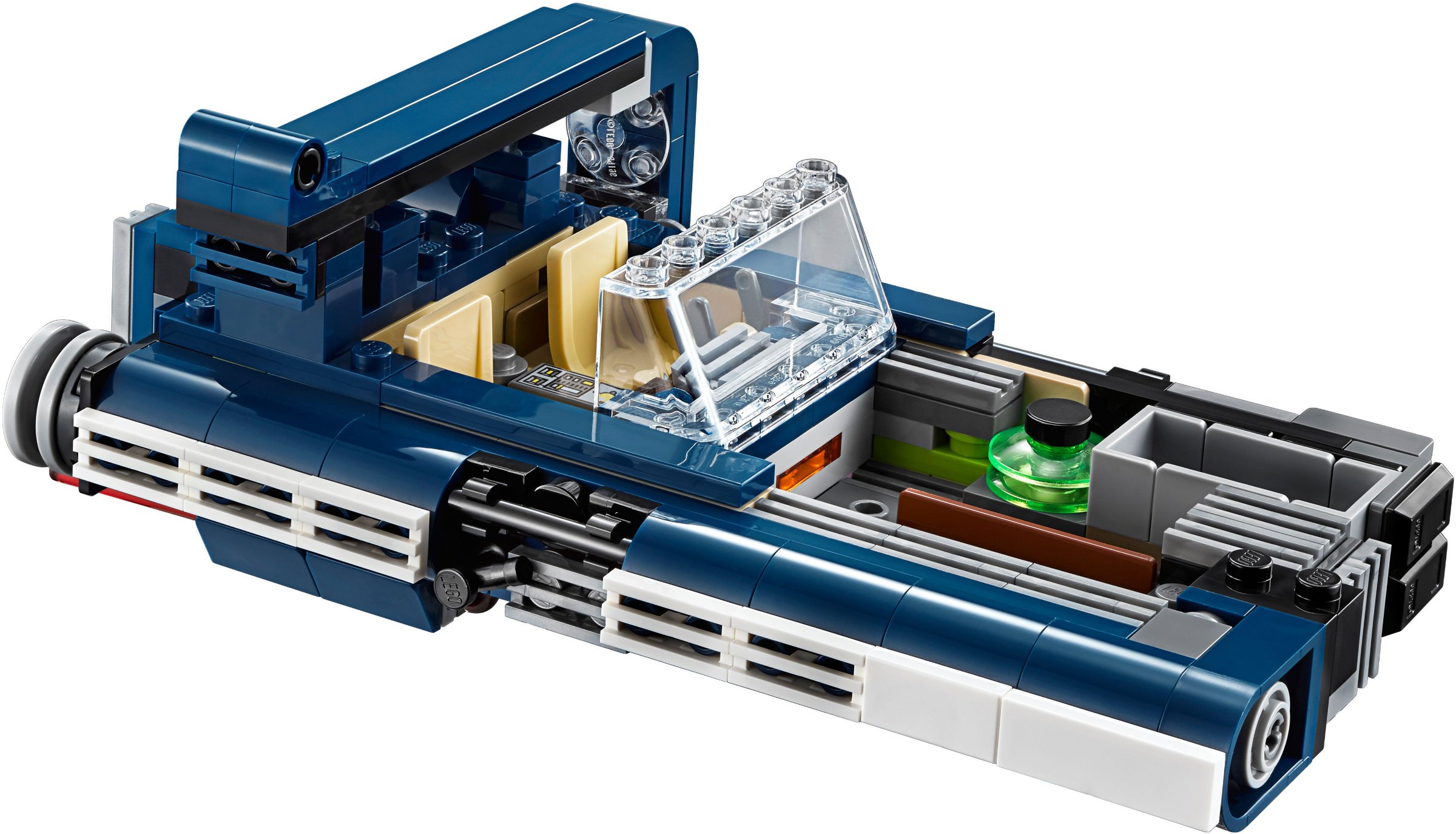 The bonnet of the speeder can be detached. Inside there’s some smuggling space, along with some engine details. There’s a space for a wrench at one corner. 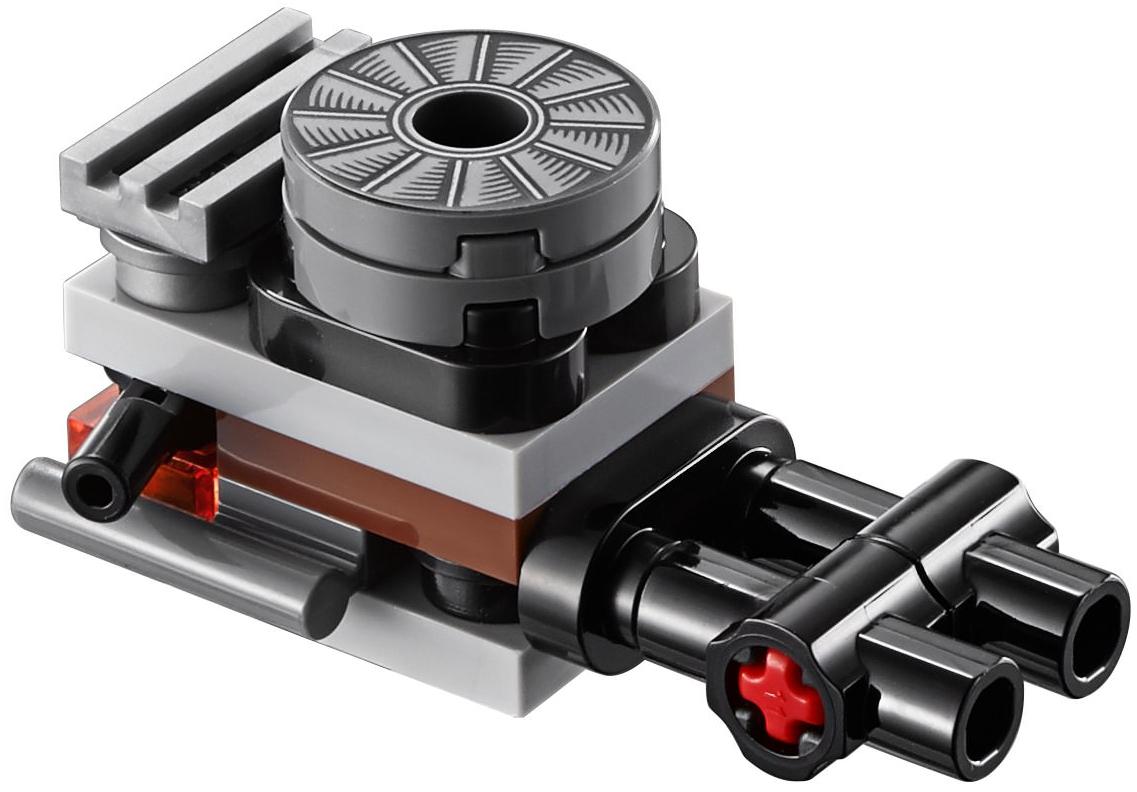 This engine segment can also be detached, and you can let Han or Qi’Ra inspect/repair it. It looks pretty good.

The bottom part of the speeder uses some SNOT techniques to create some sloping angles and keep it from looking too boring.

The back of the speeder has some engine details, though interestingly the two round engines don’t have any sort of engine glow to them – they glow orange in the movie so I kinda expected LEGO to put 1×1 translucent orange studs there. 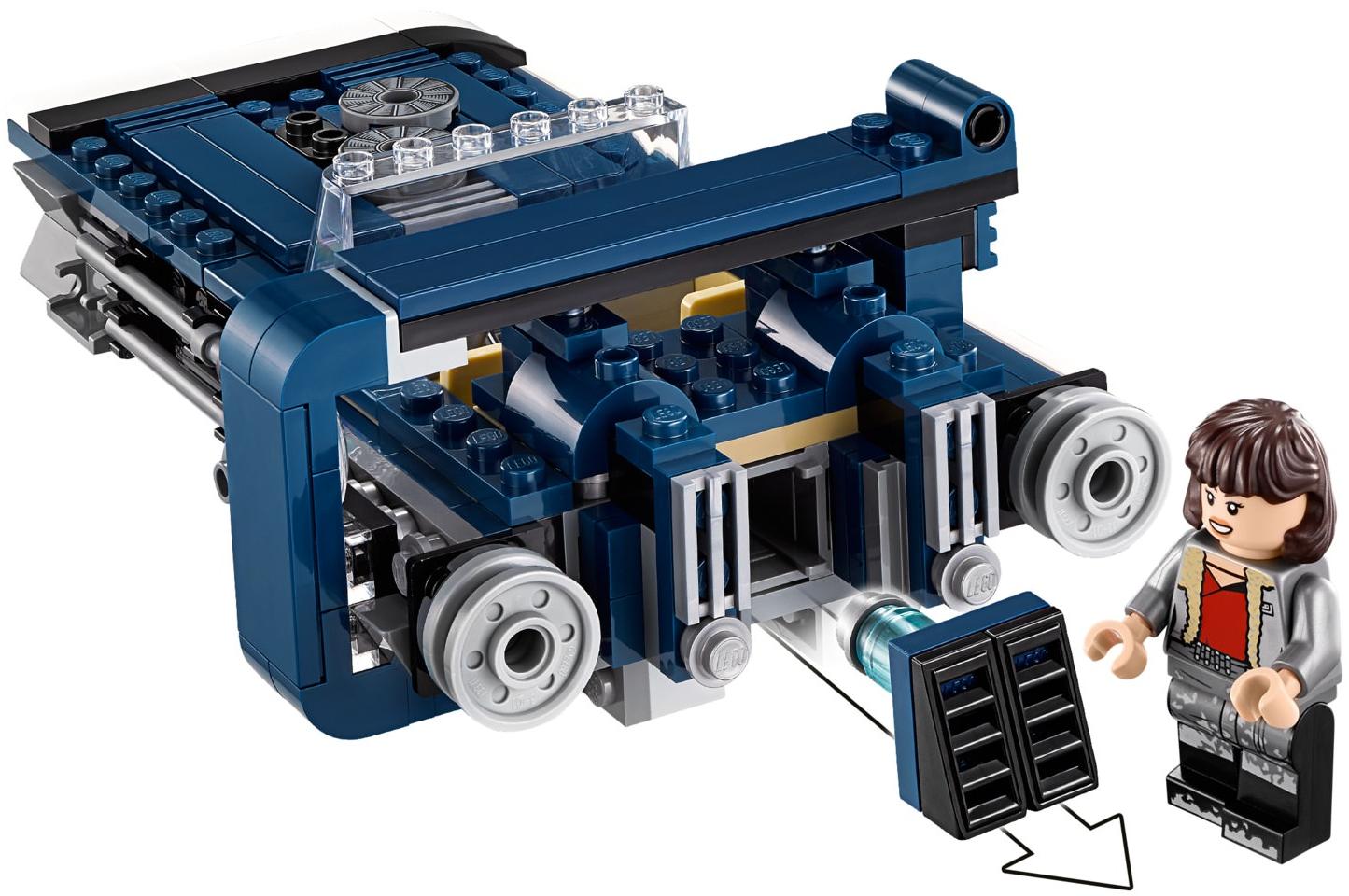 The back of the speeder has an integrated crate which serves as a smuggling compartment. The lid is blended as some grille detail, and can be detached. Inside there’s a translucent light blue 1×1 round brick which is presumably meant to be the smuggled goods. I wonder what it is – maybe spice which Han is smuggling? I believe the translucent light blue 1×1 round brick also appears in a crate inside 75212 Kessel Run Millennium Falcon too.

The Landspeeder has four small wheels at the bottom. This lets you push it along easily and make it look like the speeder is hovering. There are no tires on the wheels so you can also skid the speeder sideways with ease, giving it a true hover look. Furthermore, the wheels are hidden from most angles.

Oh, and you can probably see these two red bolts sticking prominently out of the back. As expected, these are spring-loaded shooters. 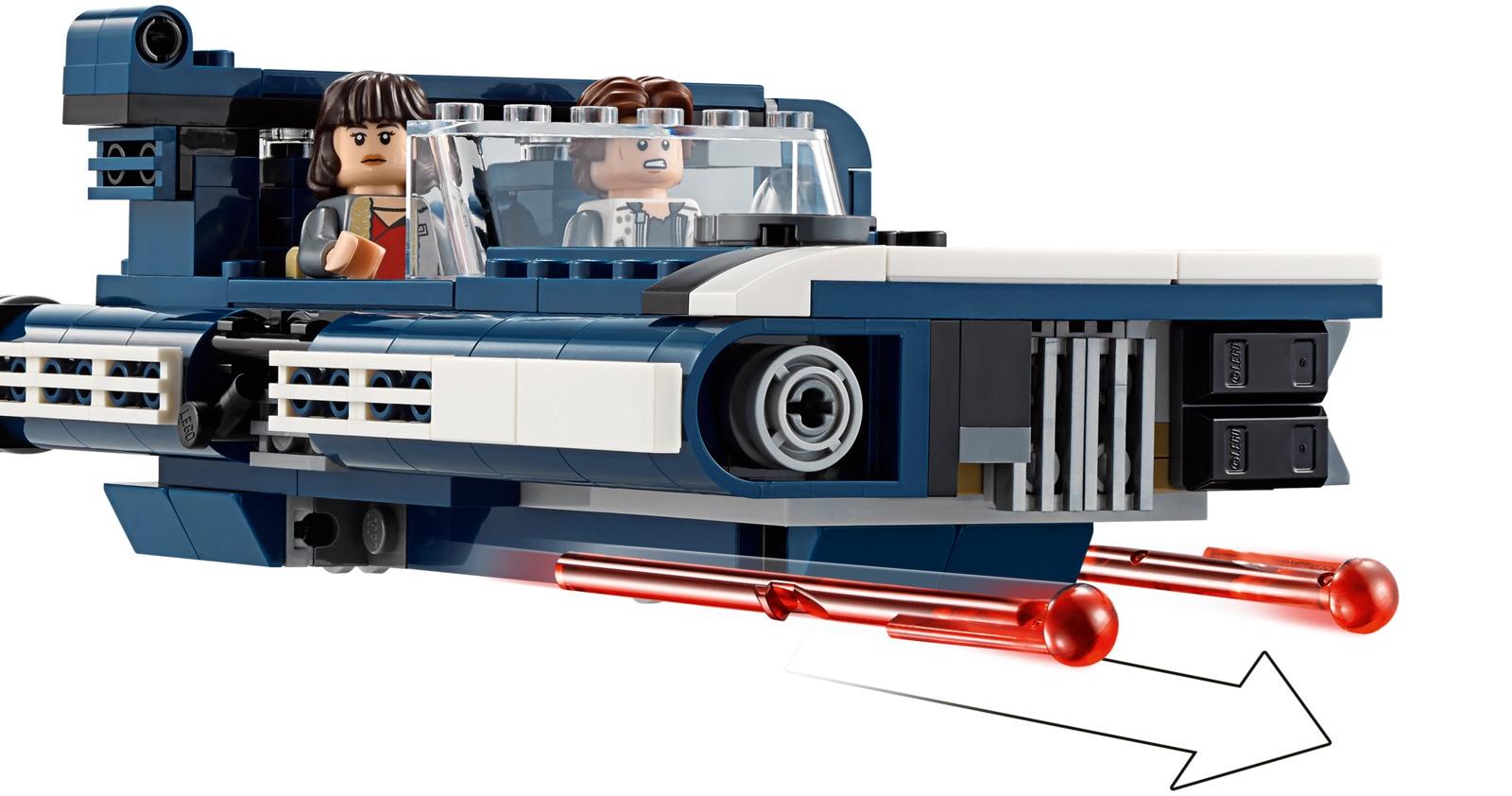 Flick them, and the missiles shoot out at the front. The tails are a bit too prominent for my liking but you can leave them out if you don’t like the look.

That is it for 75209 Han Solo’s Landspeeder! That ended faster than I expected.

Thanks for reading! Let me know what you think in the comments below 🙂