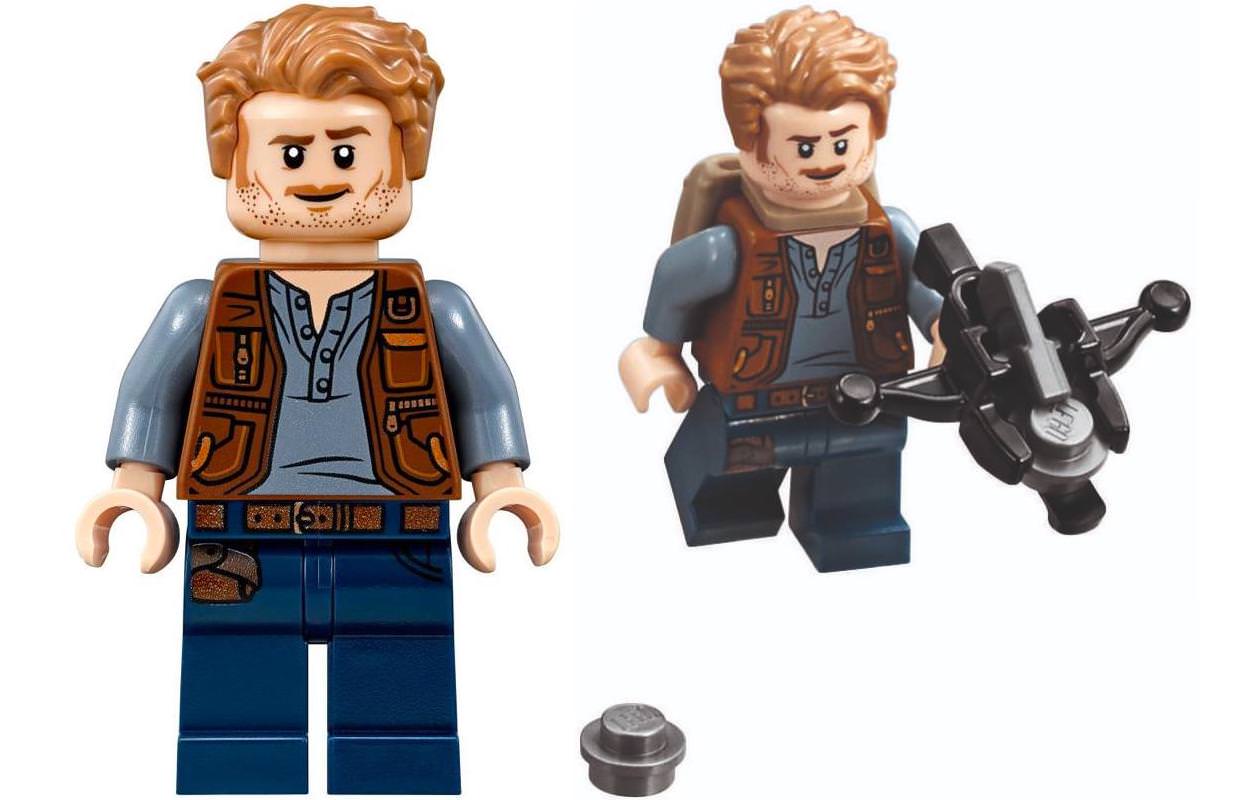 There are three minifigures included in the set. The first one is Owen Grady, the protagonist of the Jurassic World films. He has the new Chris Pratt head along with a nice tousled hairpiece. He wears a brown jacket over a sand blue shirt, and has dark blue jeans. He is not exclusive, though he does come with a dark tan open backpack and stud-shooting crossbow which other Owen Grady figures do not have. 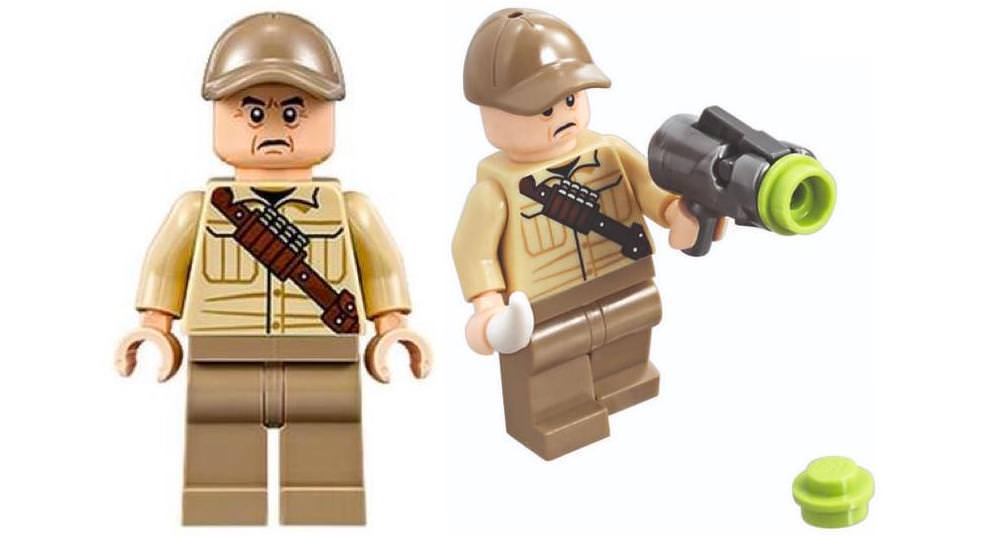 The second minifigure is Ken Wheatley. I’ve looked online but have found next to nothing about this character. It looks like he might be a villain, though. He wears a dark tan cap and pants, and has a grumpy expression. His torso is tan-colored with a brown strap across. He has a white horn accessory which presumably represents a bone, and is also armed with a silver stud shooter which is a very nice coloring for the weapon. 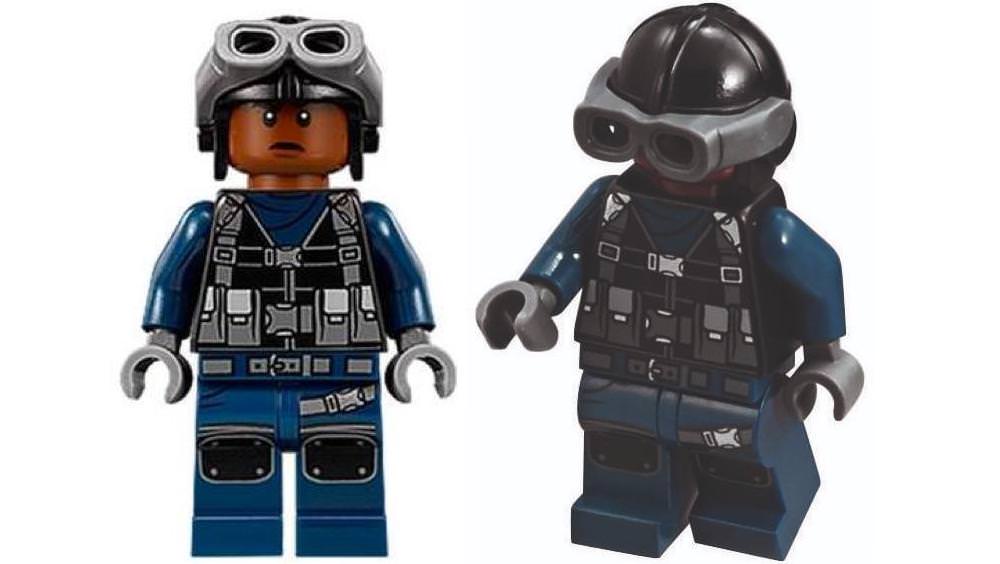 Last up is the pilot. He wears the standard dark blue and black outfit that all the guards in this LEGO wave do. He has a flight helmet with goggles, but other than that there are no accessories included. 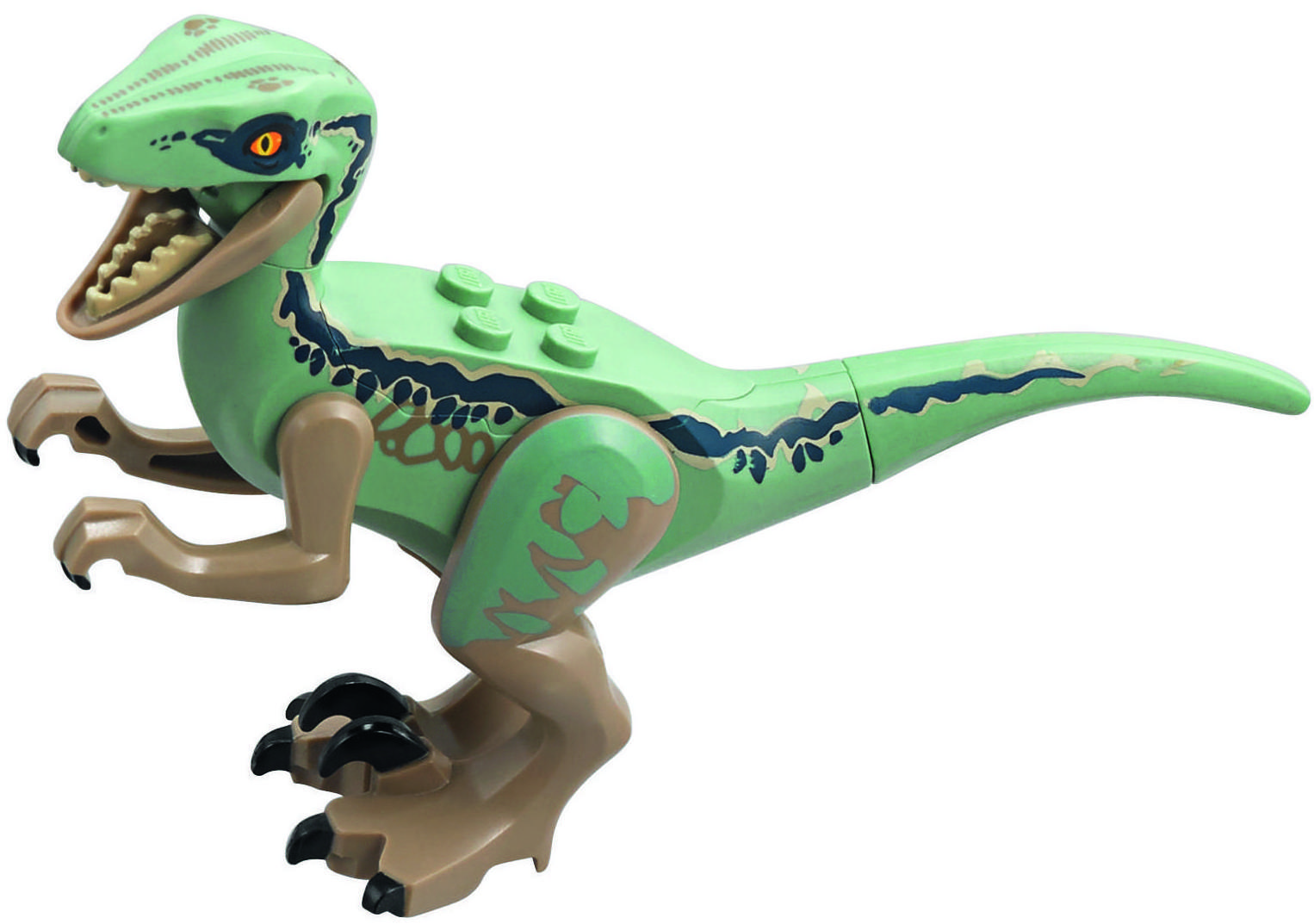 The dinosaur included is Blue. She now has a sand green and dark tan color scheme (as opposed to the 2015 one’s dark green and sand green colors) which I think looks pretty good. Her head is attached via a Technic pin so can turn side to side, and the jaw can open and close. The legs and arms can also be individually posed, which is nice. She’s a nice dino overall, though she’s not exclusive.

Overall, this minifigure lineup is okay. I like the named characters like Owen, Ken Wheatley, and Blue, but none of them are exclusive which is a little disappointing. I also think one more minifigure should have been included in this set, and I’ll explain why later. 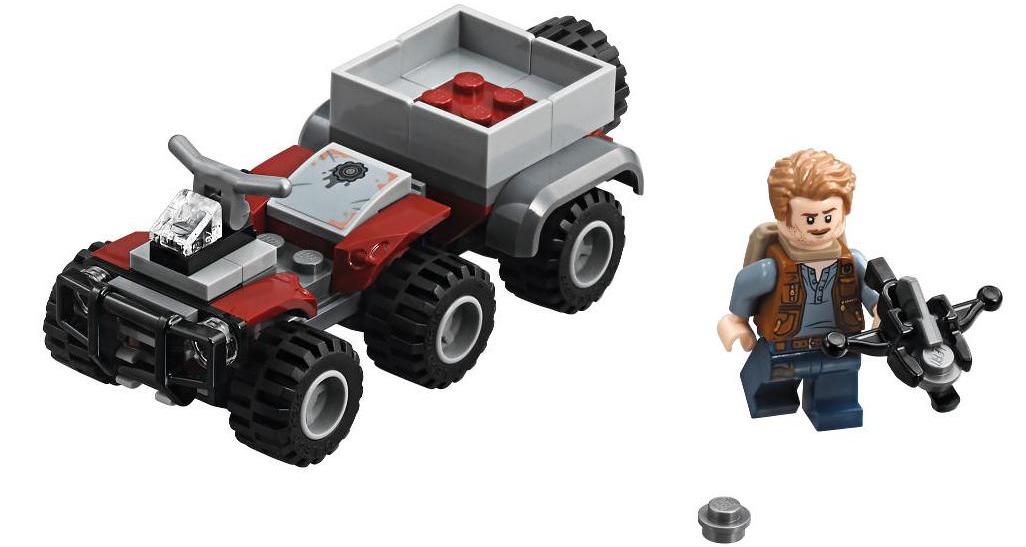 There are three builds in the set. The first one is Owen’s vehicle. It has a grey and dark red color scheme, and is basically an ATV which pulls along a rear section. The rear section is connected via a ball joint so can swivel side-to-side. The ATV uses the new nudge bar element on the front. 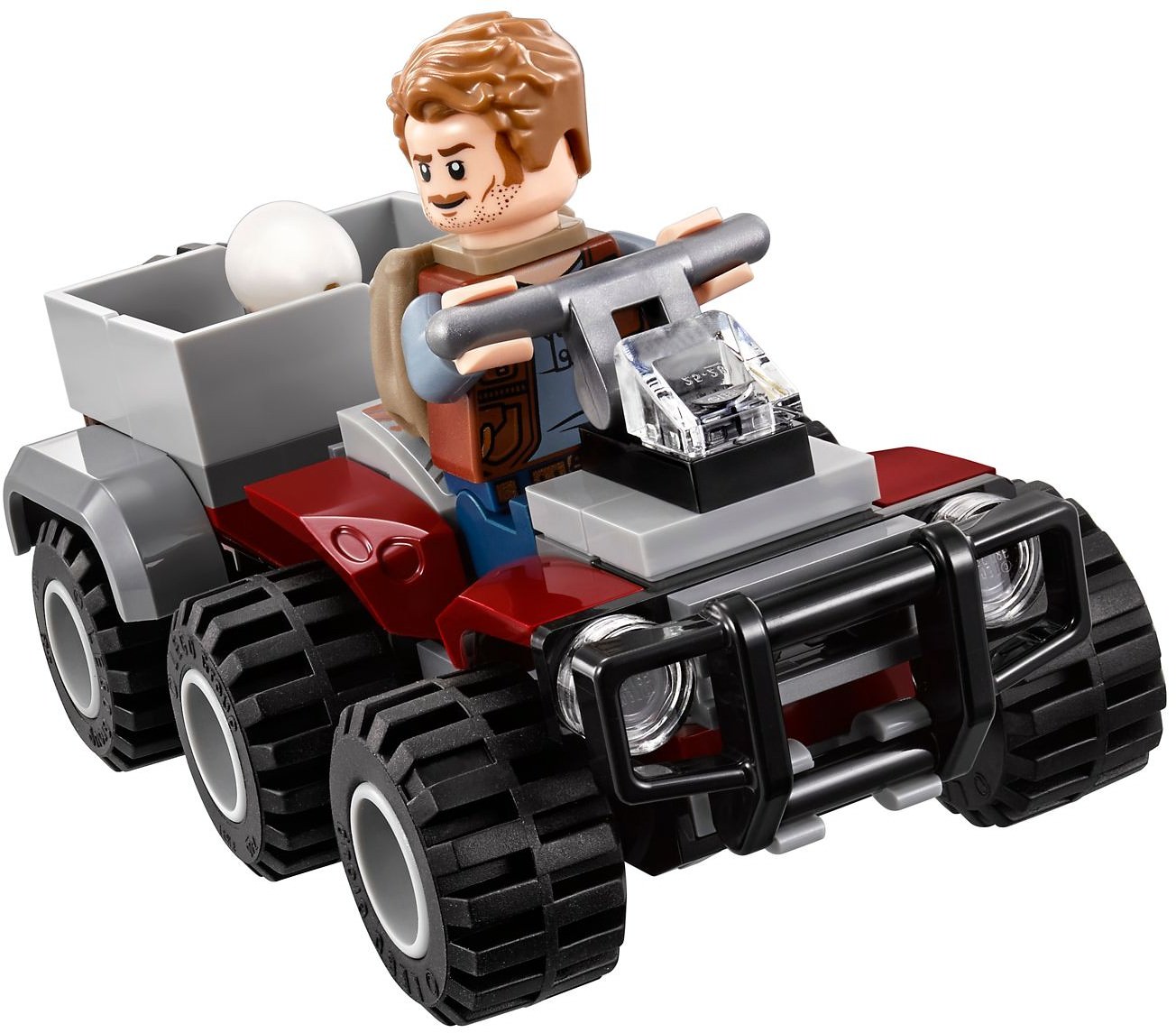 Owen can sit on the ATV. You can store stuff in the back like the included egg piece or Owen’s crossbow. The build is simple but it’s nice and provides a vehicle for Owen, unlike many sets which leave the opposing faction minifigure out. 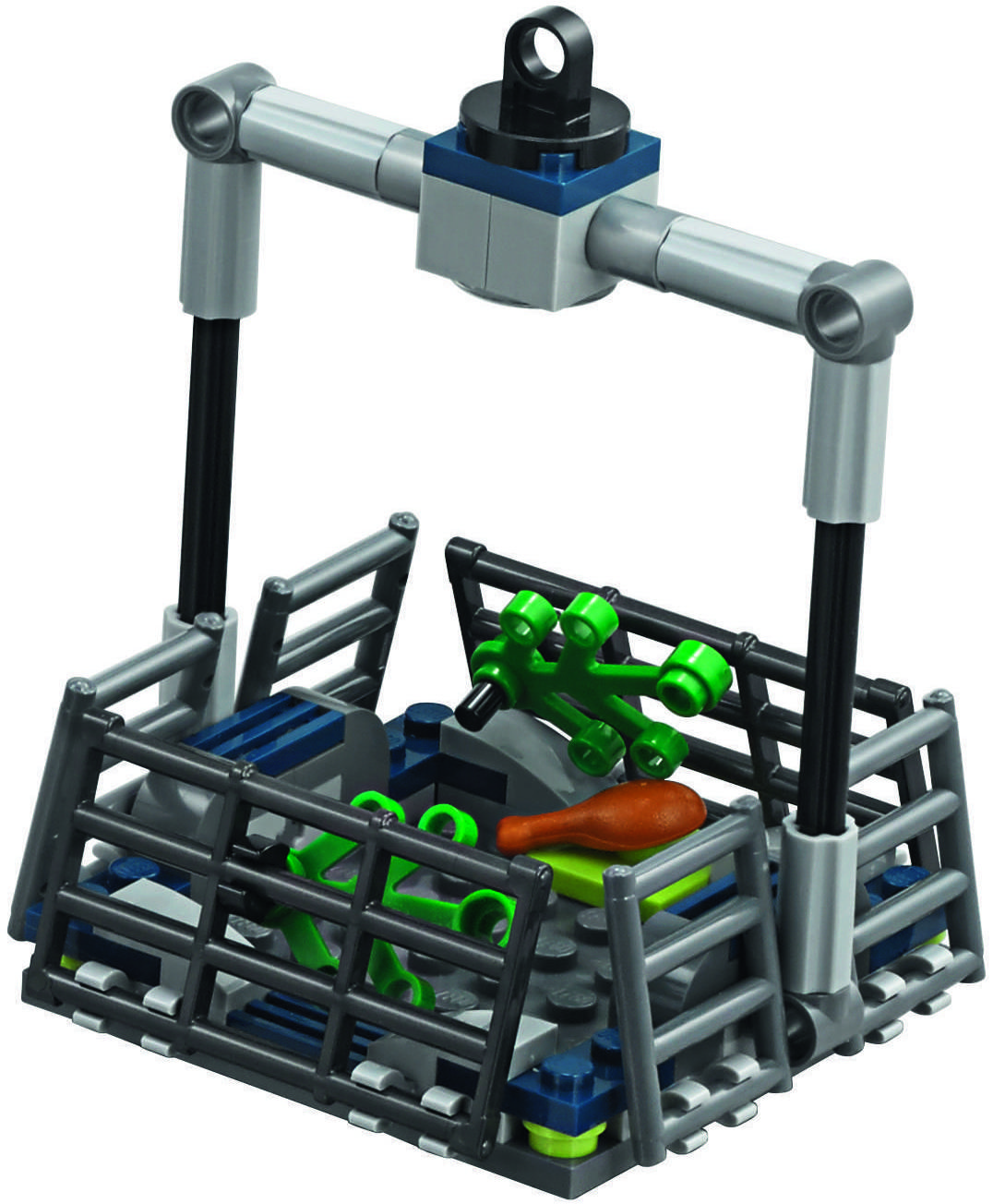 The second build is a cage used for trapping Blue. 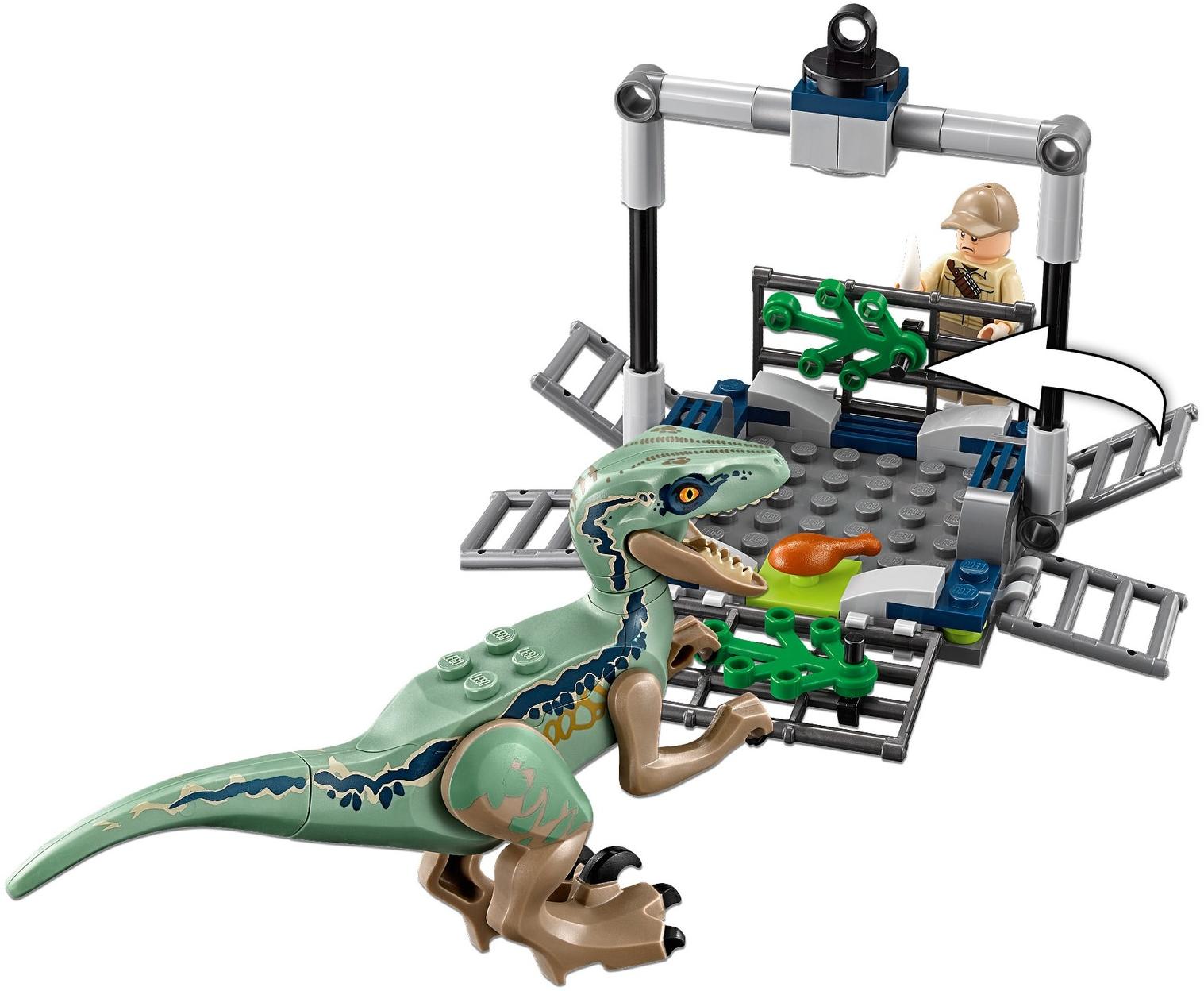 There’s a chicken drumstick inside as bait and a couple of leaves to disguise the cage, though in my opinion neither of them are particularly convincing. You can fold down the barred elements on the side to let Blue walk in, then fold up the sides to trap him. The cage has a Technic hole on the top which lets it be lifted up by the helicopter. 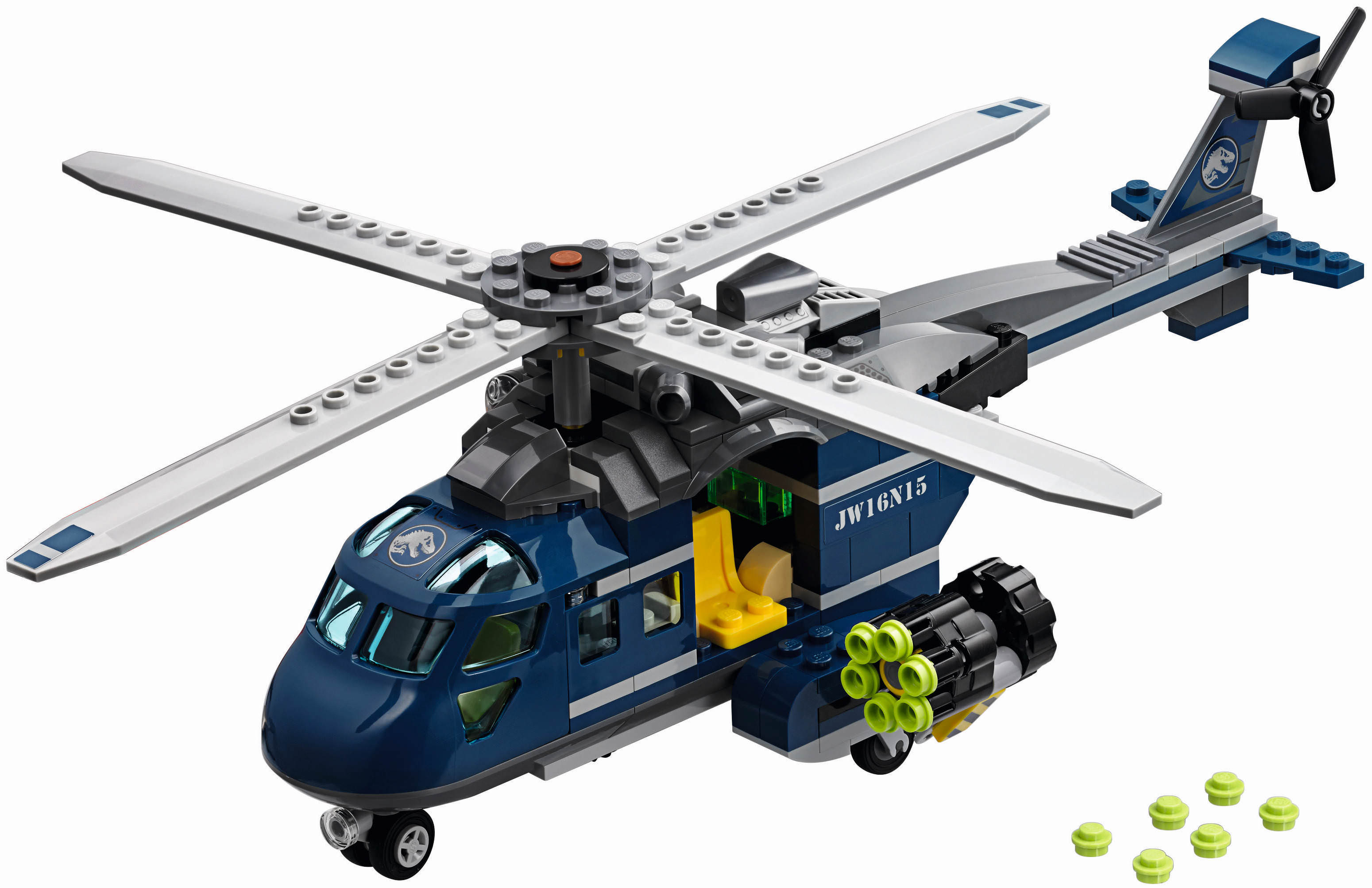 The largest build is this dark blue helicopter. I expected to completely dislike it, but funnily enough I actually quite like it now! It uses the regular City helicopter cockpit mold at the front which is kind of annoying, but it looks good and is easily removable. There is one seat inside for the pilot to fly the helicopter. 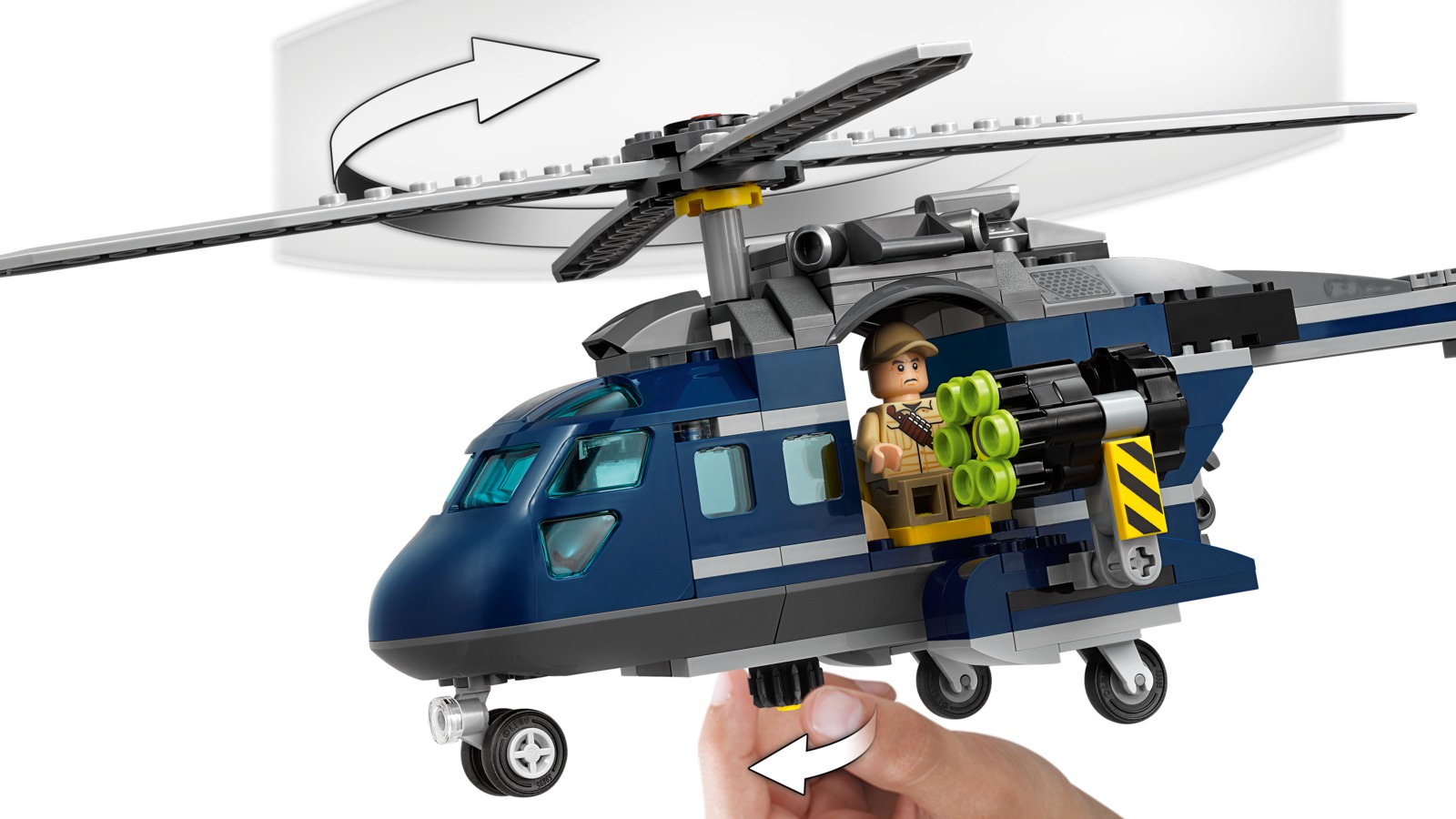 The helicopter has a few fun play features. There’s three wheels on the bottom as landing gear, but there’s also a literal gear at the bottom. If you spin the gear, the huge propeller blades at the top spin around too. It’s satisfying as you don’t have to turn the propellers themselves, which makes it feel like they’re spinning on their own. The axle connecting the gear and the propellers runs straight through the helicopter behind that window panel, but it doesn’t really take up too much space so I’m okay with it. There’s only one problem – the propeller blades are set up too far forward which is, aerodynamically speaking, impractical, and looks kind of odd. Oh well, it was necessary for this mechanism. 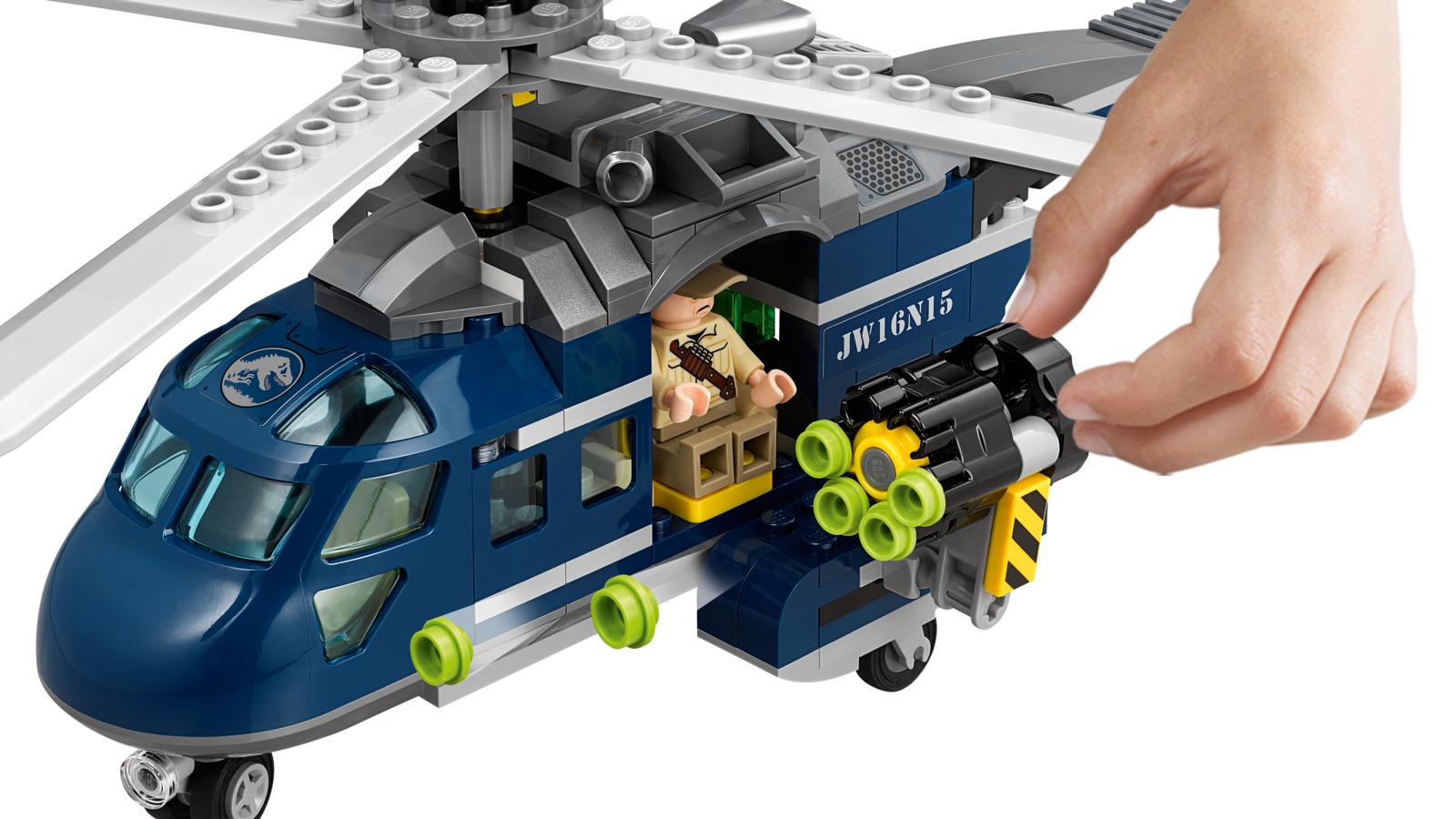 The center body part of the helicopter has two seats back-to-back. Each seat allows the person to control the respective equipment on either side – however only two minifigures are included to man the helicopter, leaving one empty seat. That’s why I think another minifigure should’ve been included, maybe at least a guard. This side of the helicopter has a rapid stud shooter mounted on a mini ball joint. It fires off lime green studs which I’m assuming represents tranquilizer darts? 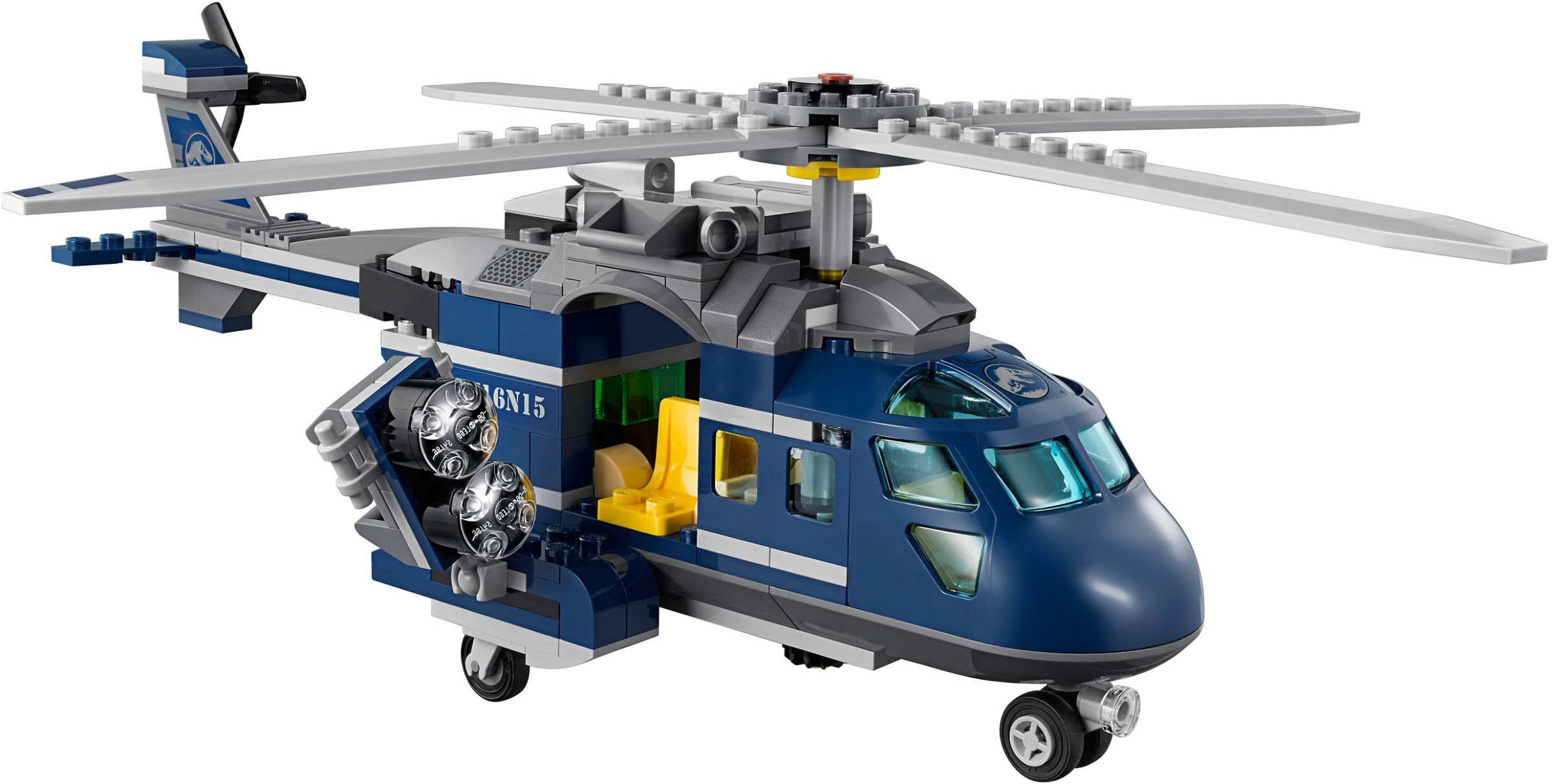 The other side of the helicopter has two floodlights which presumably can be used to search for Blue. It is also mounted on a mini ball joint and has a yellow seat for an operator. 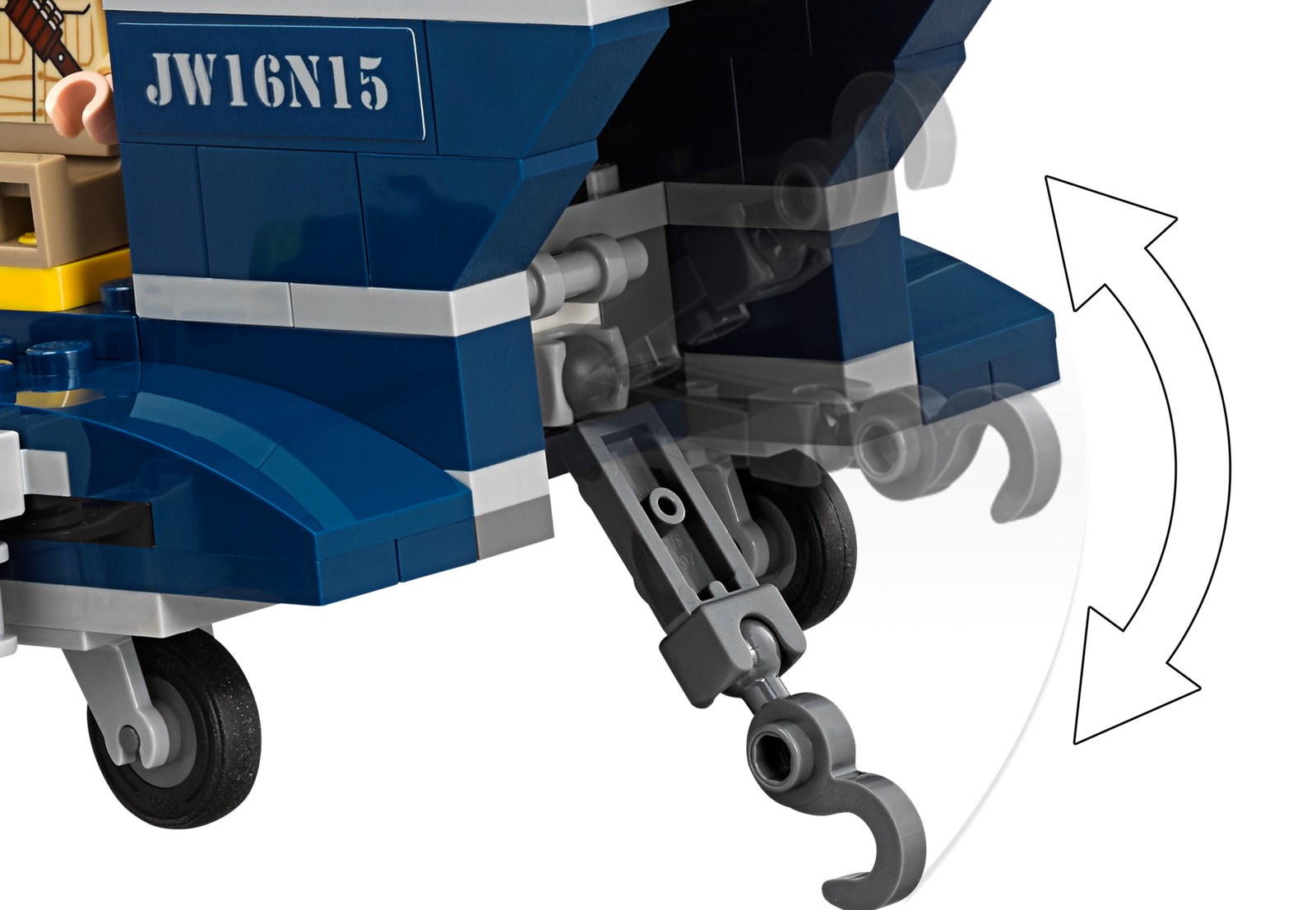 The back of the helicopter has a hook mounted on two ball joints. It can be raised up or lowered down, and can carry the cage that Blue is in. It’s a cool play feature that works perfectly fine, and I’m glad there’s no string to tie as I hate strings. 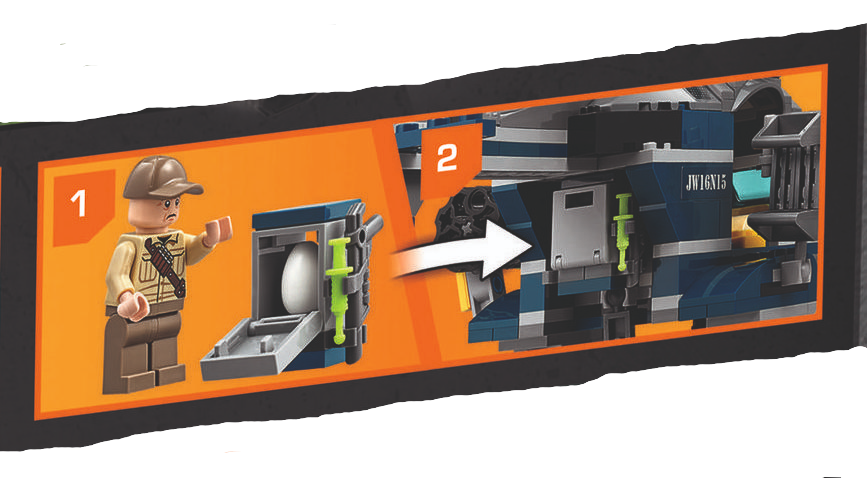 There’s also this mailbox element which can be used to store a dinosaur egg inside. There’s two clips attached to the mailbox which can be used to attach the included tranquilizer rifle. The box clips to the back of the helicopter just above the hook connection section. This is a nice use of space considering that not much else could be stored here and it would likely have been otherwise left empty. 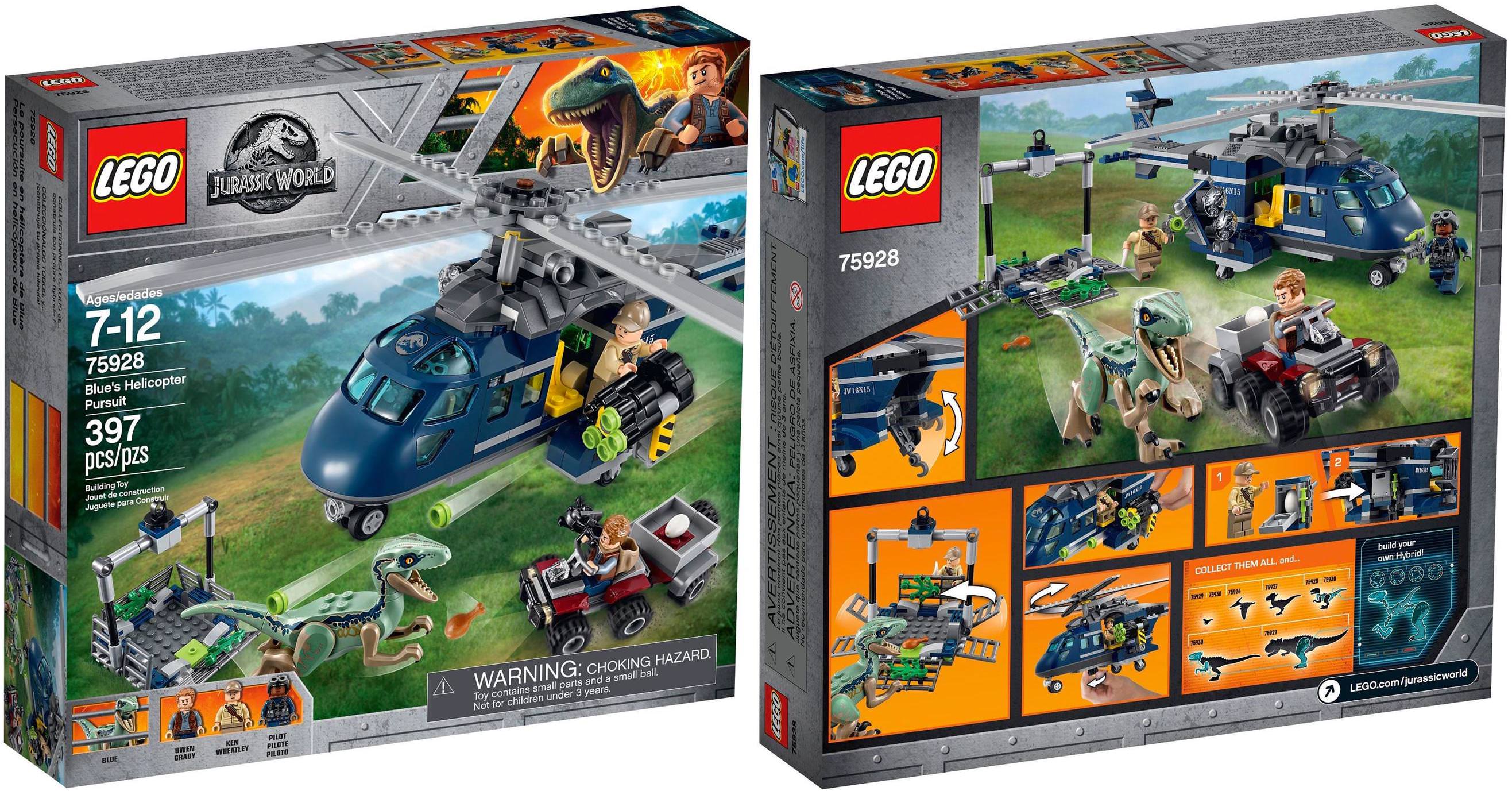 Okay, so that is it for the set! I actually like it more than when it was first revealed. I thought it would be another boring helicopter set, but I actually like the helicopter build quite a lot. The minifigures are a little disappointing, though it’s nice to get Blue. Playability is good as the helicopter has nice play features and you can transport Blue around in the cage with Owen in pursuit. 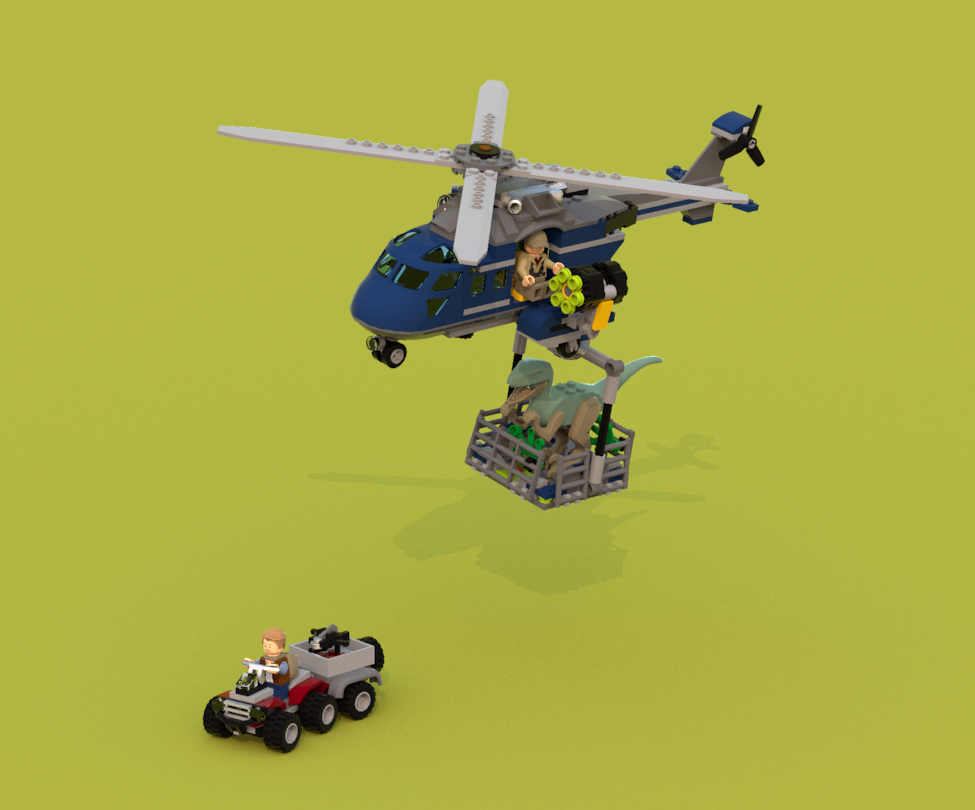