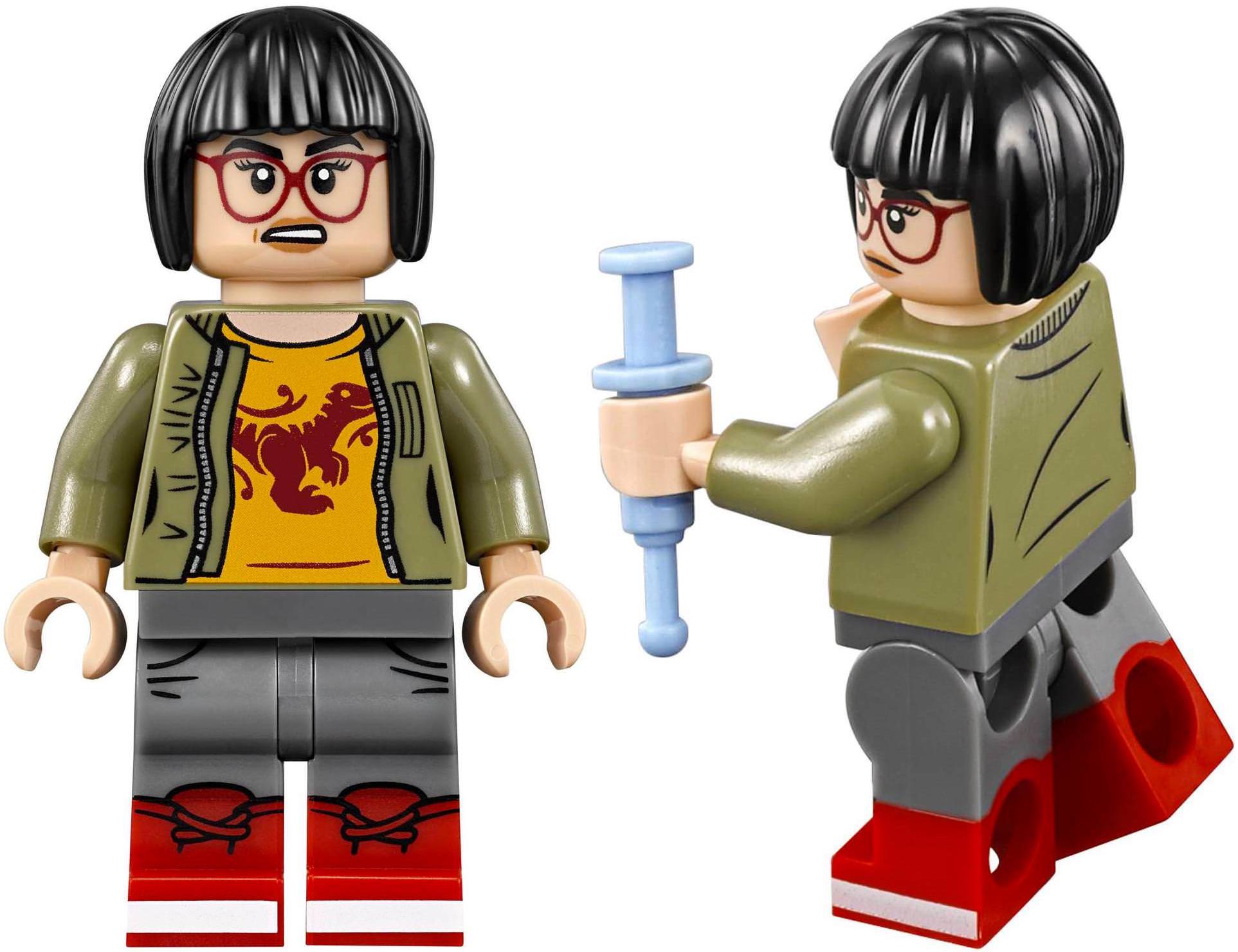 The first minifigure in the set is Zia Rodriguez, a member of Claire’s Dinosaur Protection Group. This minifigure has some nice details – her hairpiece is not uncommon but fits, and she has a double-sided head which looks good. Her olive green torso shows a jacket over a dinosaur shirt underneath, and she has dual-molded legs – a rarity in nowadays’ minifigures, unfortunately. The pants have some printing on the top as well as some more detail on the lower part to show the sneakers’ design. Her legs also have printed white stripes on the foot portion that continue on to the sides. She has a light blue syringe. A very detailed, exclusive minifigure overall. 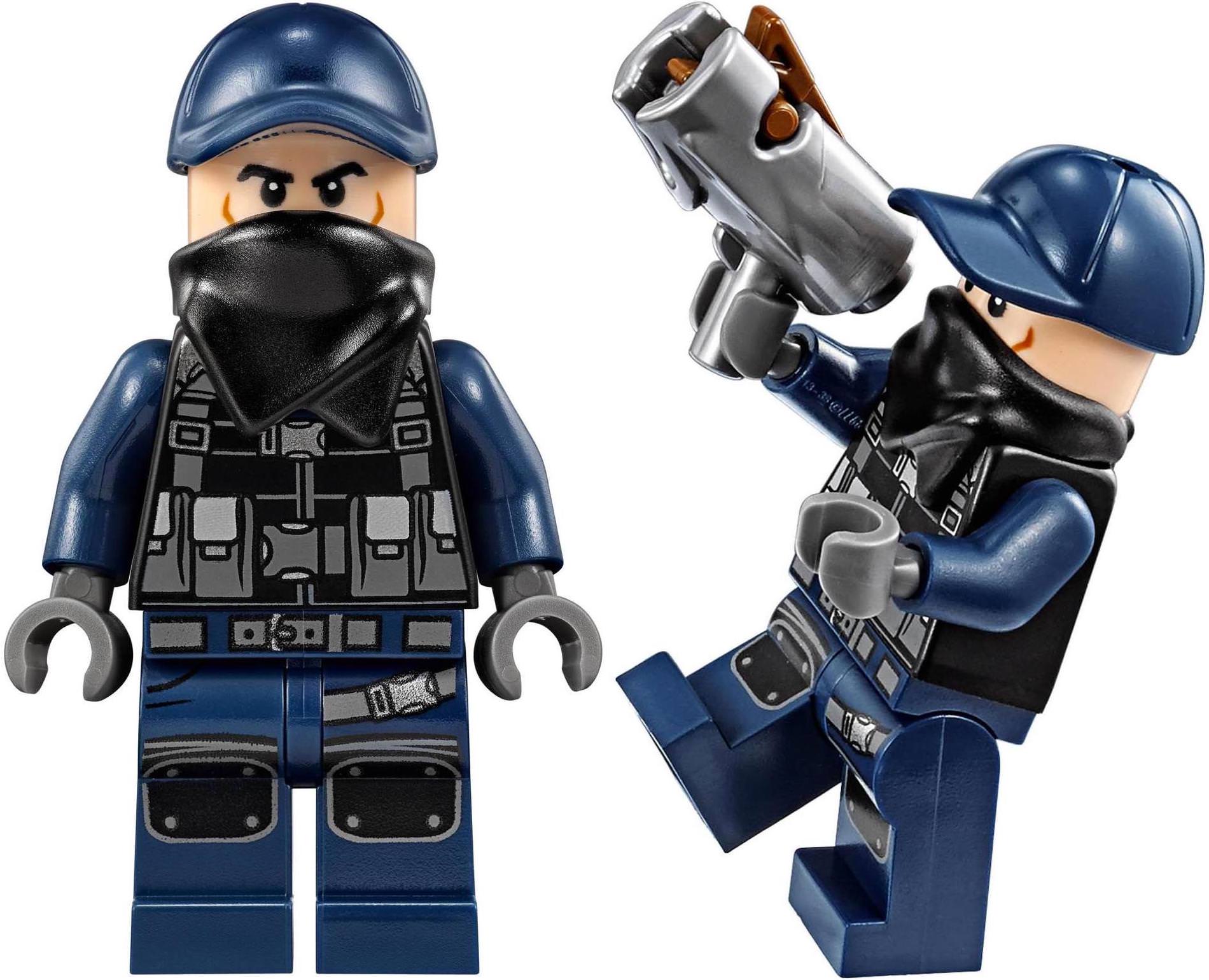 The second minifigure is a guard. He wears the standard dark blue and black guard uniform that we’ve seen across the Fallen Kingdom line, which looks good. He wears a dark blue cap and has a generic head piece underneath (the one used on minifigures like Lex Luthor or a First Order Officer). He has a black scarf wrapped around his neck. It covers his mouth and is a nice look, something not sported by other Fallen Kingdom guards. His weapon is a silver stud shooter with a brown trigger, which is a nice and interesting color combination. Interestingly, the stud shooter fires off translucent light blue studs and not lime green like Ken Wheatley’s gun in 75928 Blue’s Helicopter Pursuit. Maybe it’s an electric shocker and not a tranquilizer dart? 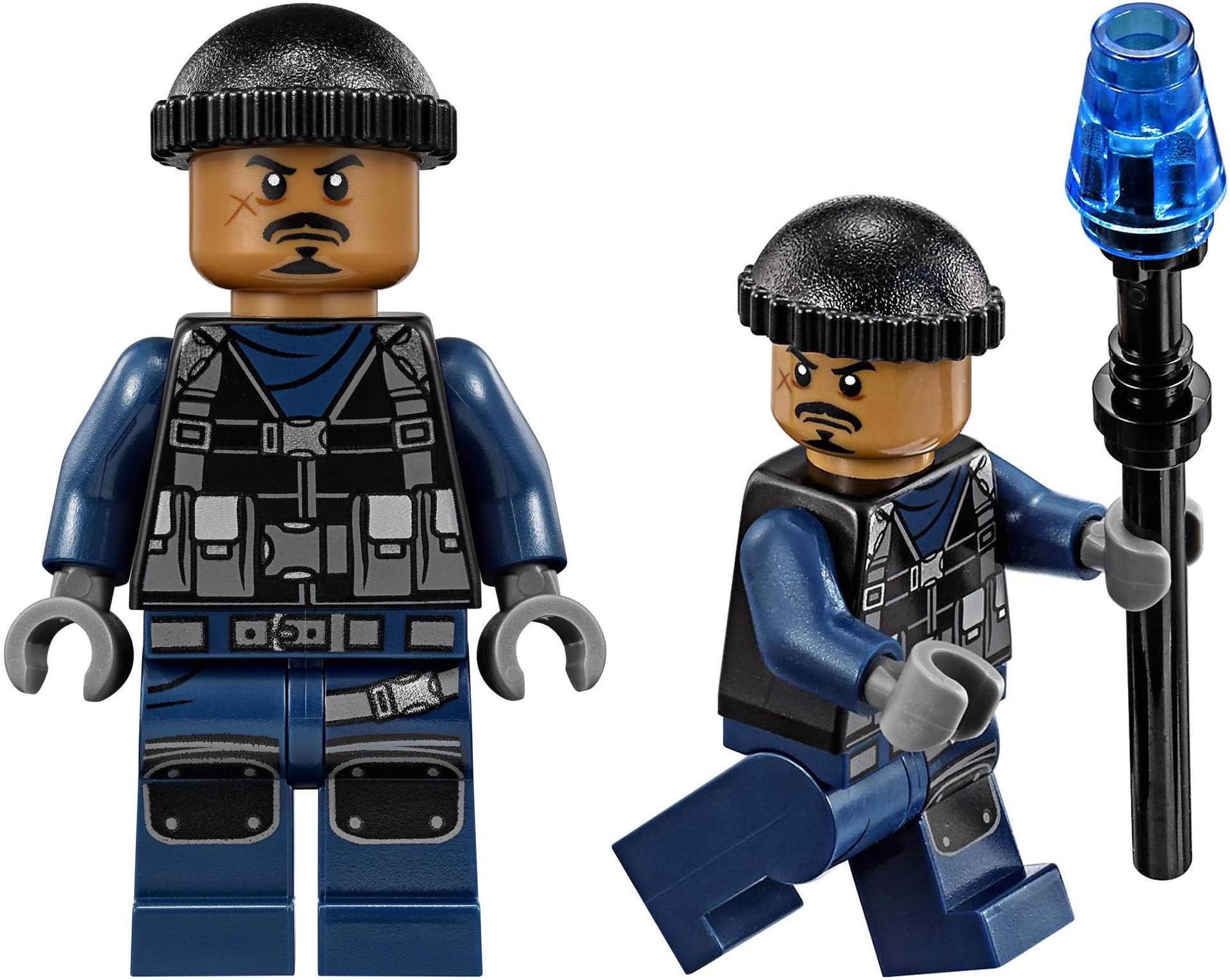 The final minifigure is another guard. He, too, wears the standard dark blue and black outfit which is very nicely detailed, as always. HIs face is new and of a darker skin tone, and he wears a black knitted hat. Personally, this guy reminds me of the Shark Army Thug from 70612 Green Ninja Mech Dragon – the knitted caps and the angry expression are very similar, don’t you think? The guard is armed with what the description calls a “shock prod” – presumably this acts like an electrostaff from Star Wars, and stuns the dinosaur. It looks pretty good for a brick-built accessory.

There’s a baby Velociraptor included in this set. I’m guessing this is Blue’s baby, since it is sand green and has a dark green stripe. It’s a nice one-piece mold, but not exclusive. 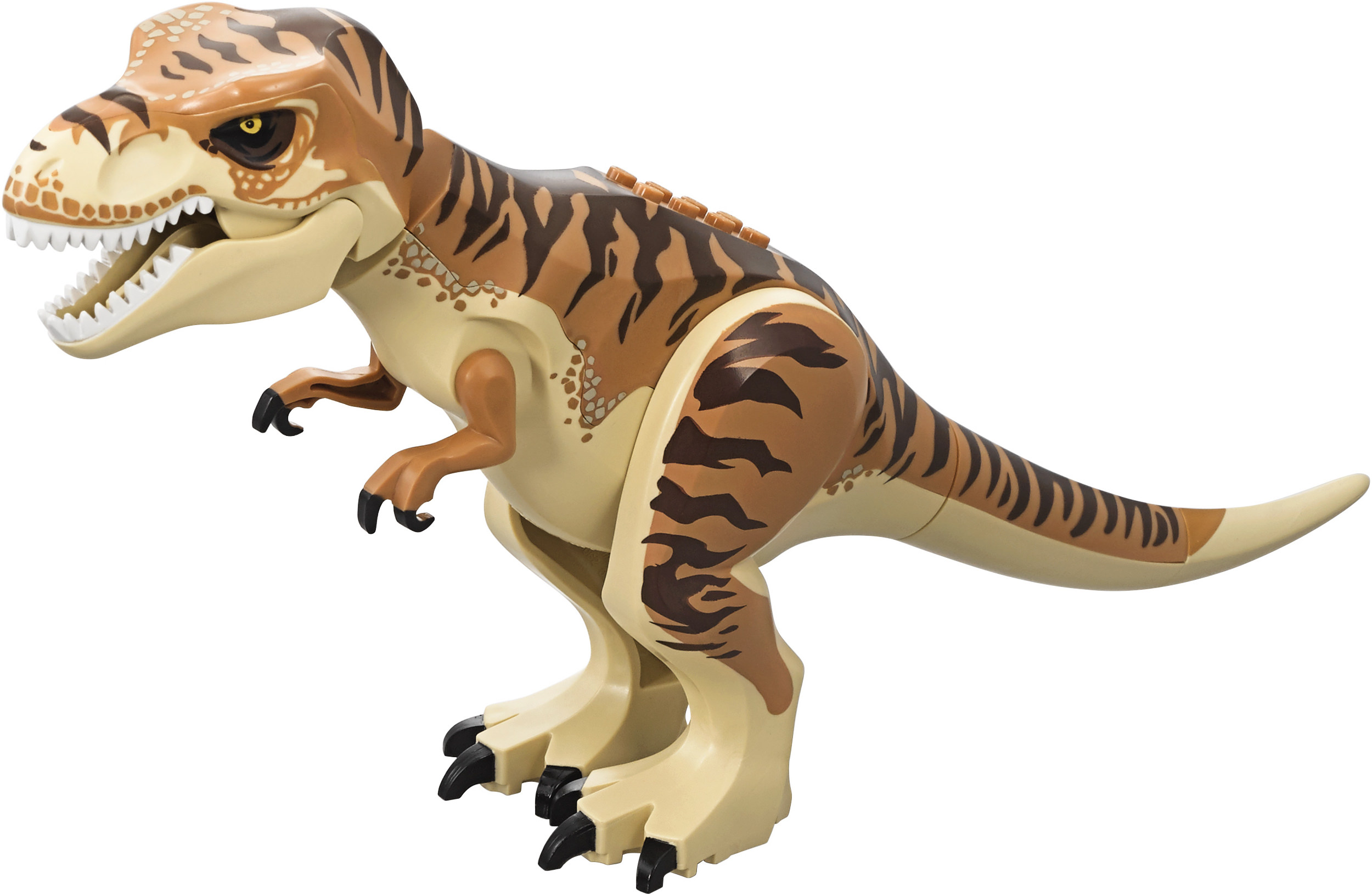 The star of the show, though, is the giant T-Rex included. It reuses the regular LEGO T-Rex mold, but has new coloring and prints. It is now tan and medium nougat, which is a nice, semi-realistic coloring if you ask me. The printing is also very detailed, with nice brown stripes and some dotted highlight areas. The T-Rex comes in 8 pieces – head, jaw, arms x2, legs x2, body, and tail. There are eight studs on the body so you can attach pieces there. The hands can also grab bars, while the legs have anti-stud connections underneath. 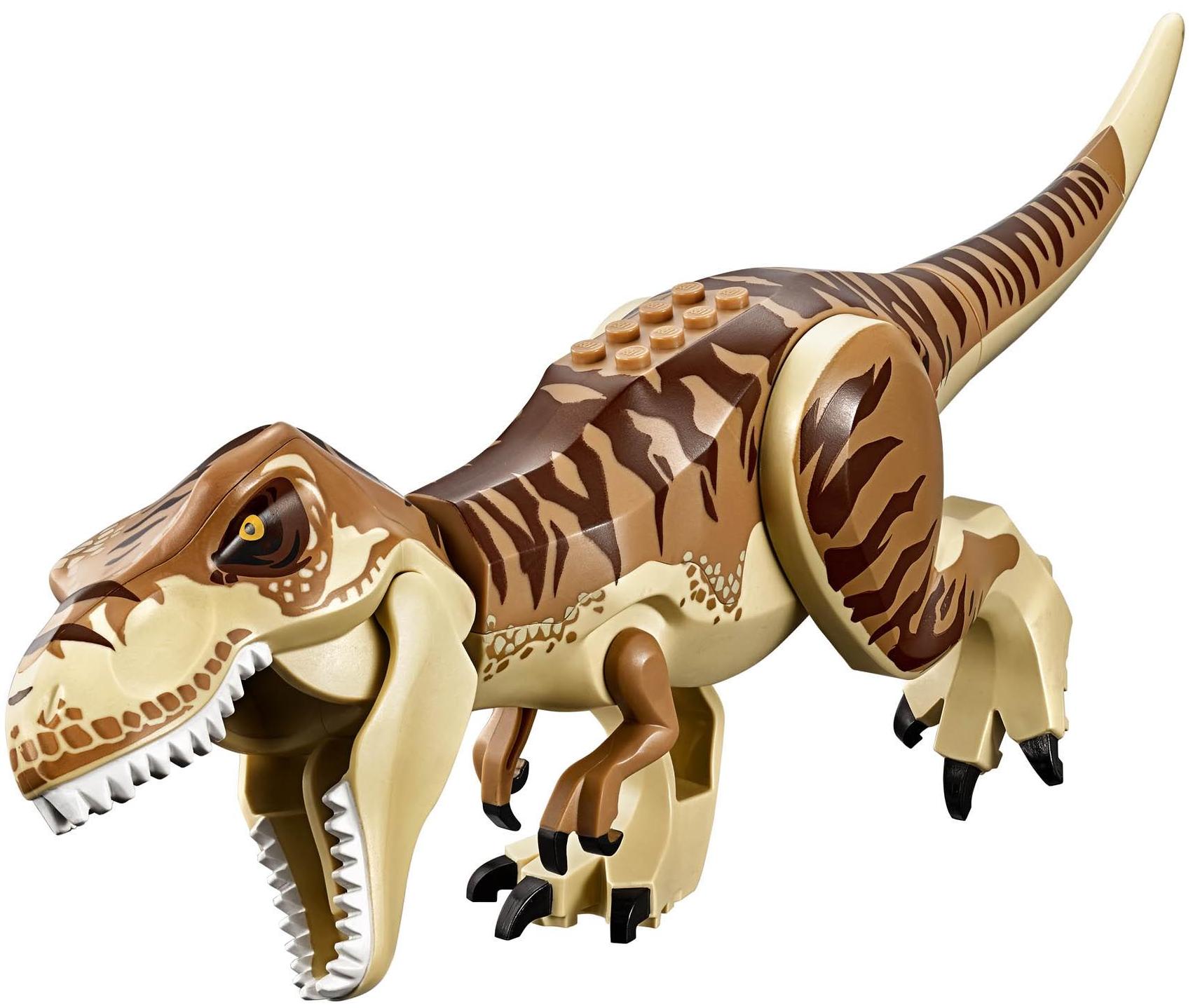 The jaw can open and close, though there’s no in-between. The head can turn side-to-side too on a Technic pin. You can pose the T-Rex is many posters, though balance may be slightly tricky. Fortunately, if you attach at least one of the feet to a studded base (like a baseplate), the stable poses that you can put the T-Rex into greatly increase. Even though it’s not a new mold, I really like this T-Rex. The only thing that feels slightly odd to me is that it uses such huge molds, it almost doesn’t feel like LEGO.

Oh, and you can chomp on minifigures with the T-Rex’s mouth. Yummy!

The figure selection will be a big draw for many, but mostly because of the T-Rex (though some might get it for Zia). In terms of the minifigures themselves, they’re not bad – Zia being the standout, though the other two guards are great too – but one or two more would’ve been nice. Maybe an alternate version of Claire or Franklin. 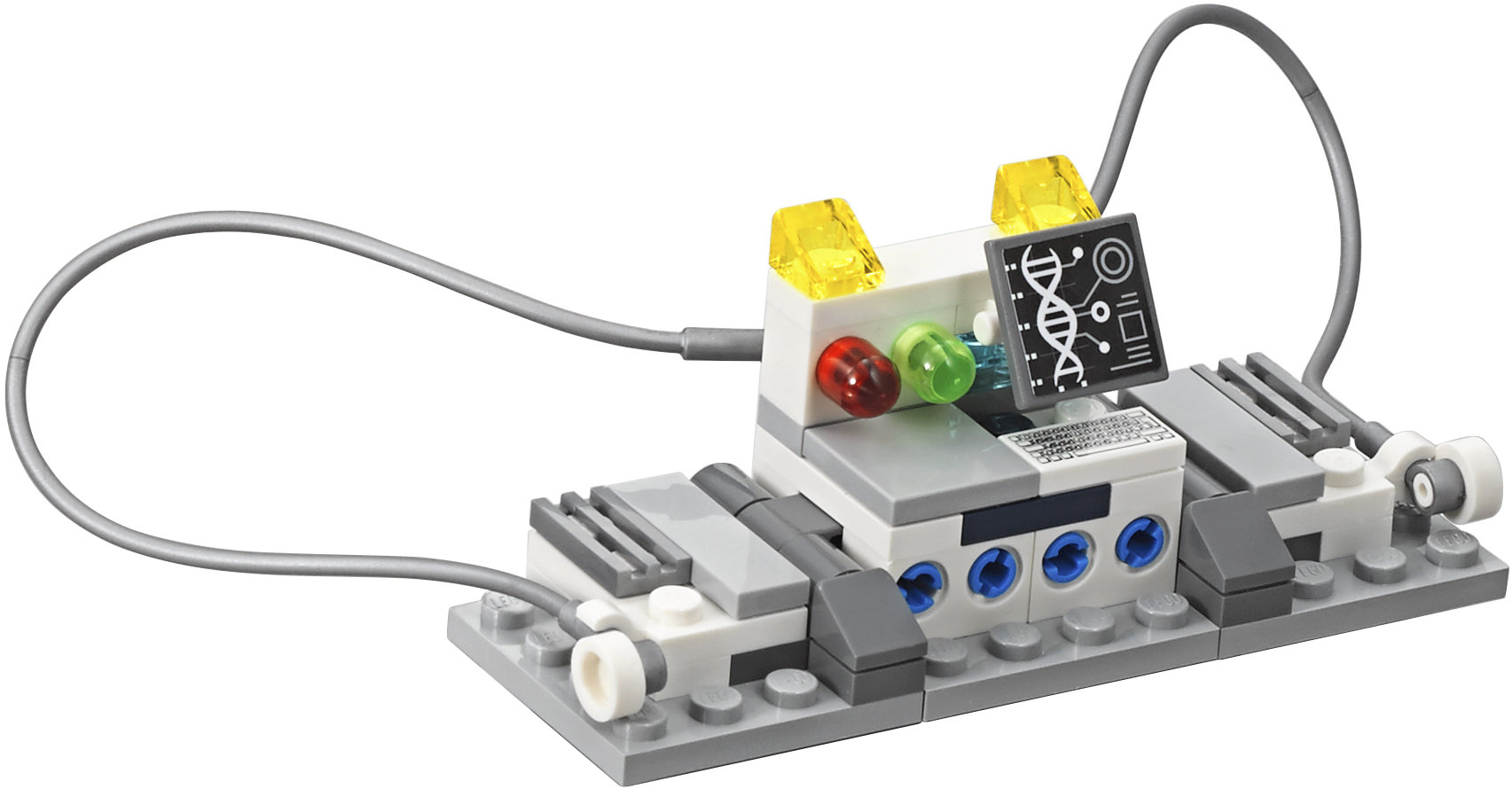 Now on to the builds. There are three in the set – the first one being this mobile lab section.  The center part is a lab table. It has a stickered computer screen with some DNA information on it, along with a printed keyboard underneath. To the side, there’s a plain 2×2 grey tile and a couple of lights. There is also a lower counter on either side that has a transfusion lead attached to it. 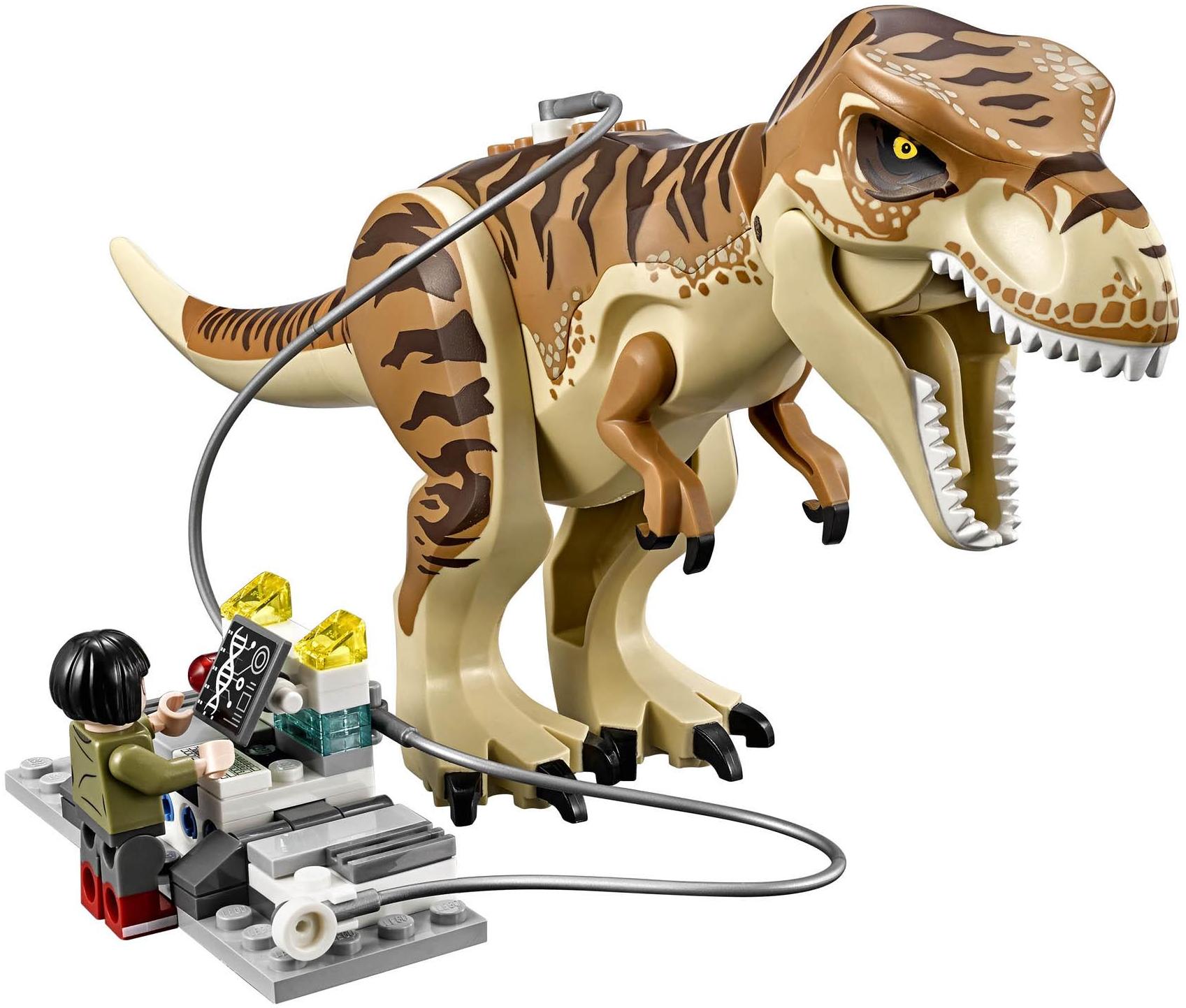 …or attach the transfusion leads to the T-Rex to perform a medical transfusion. 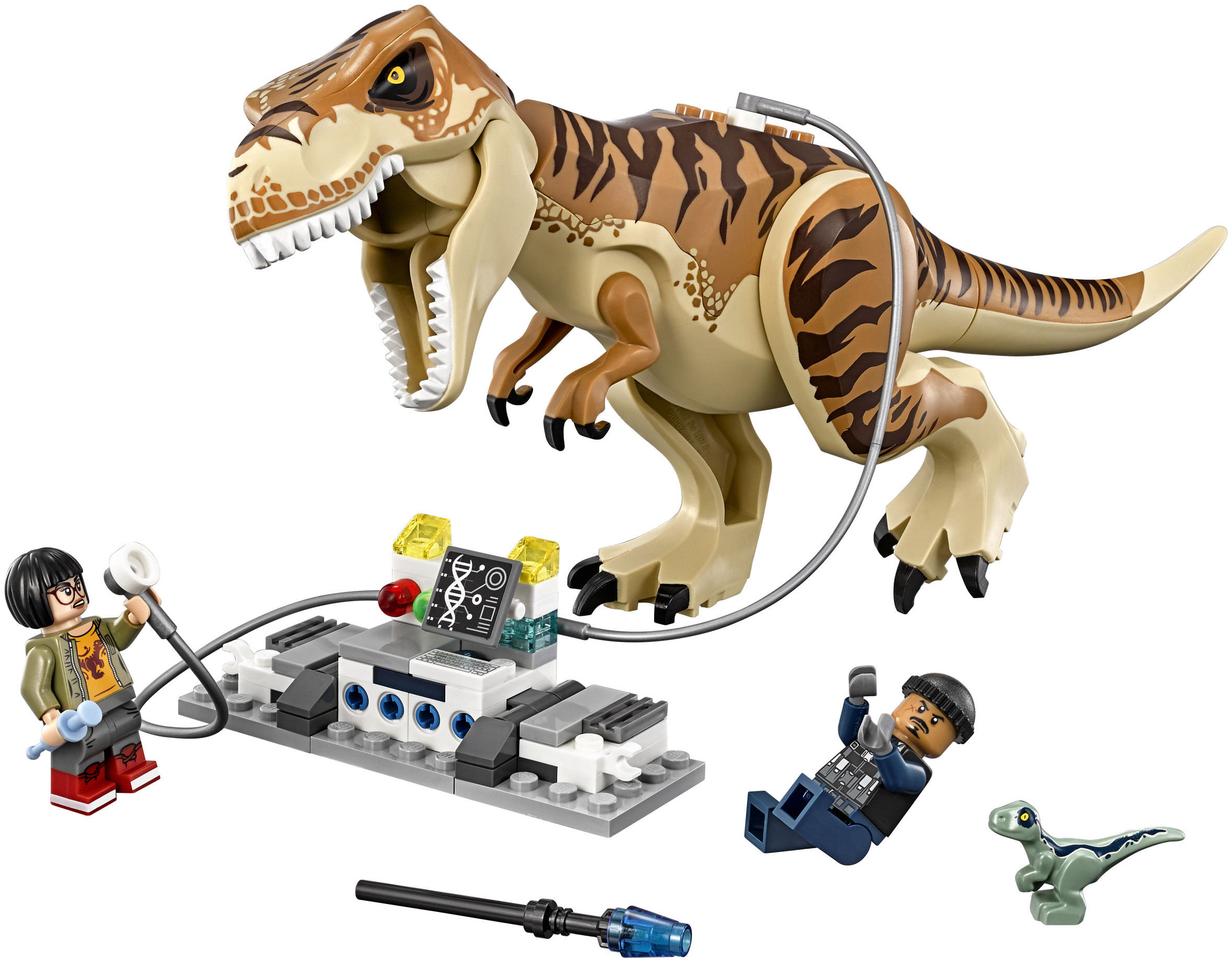 And this, of course, results in the inevitable mishap. I mean, what were these guys thinking, letting a T-Rex loose?!

The sides of the mobile lab can be folded in on Technic pins to compress it for transportation, but I think it looks pretty ugly in this mode. 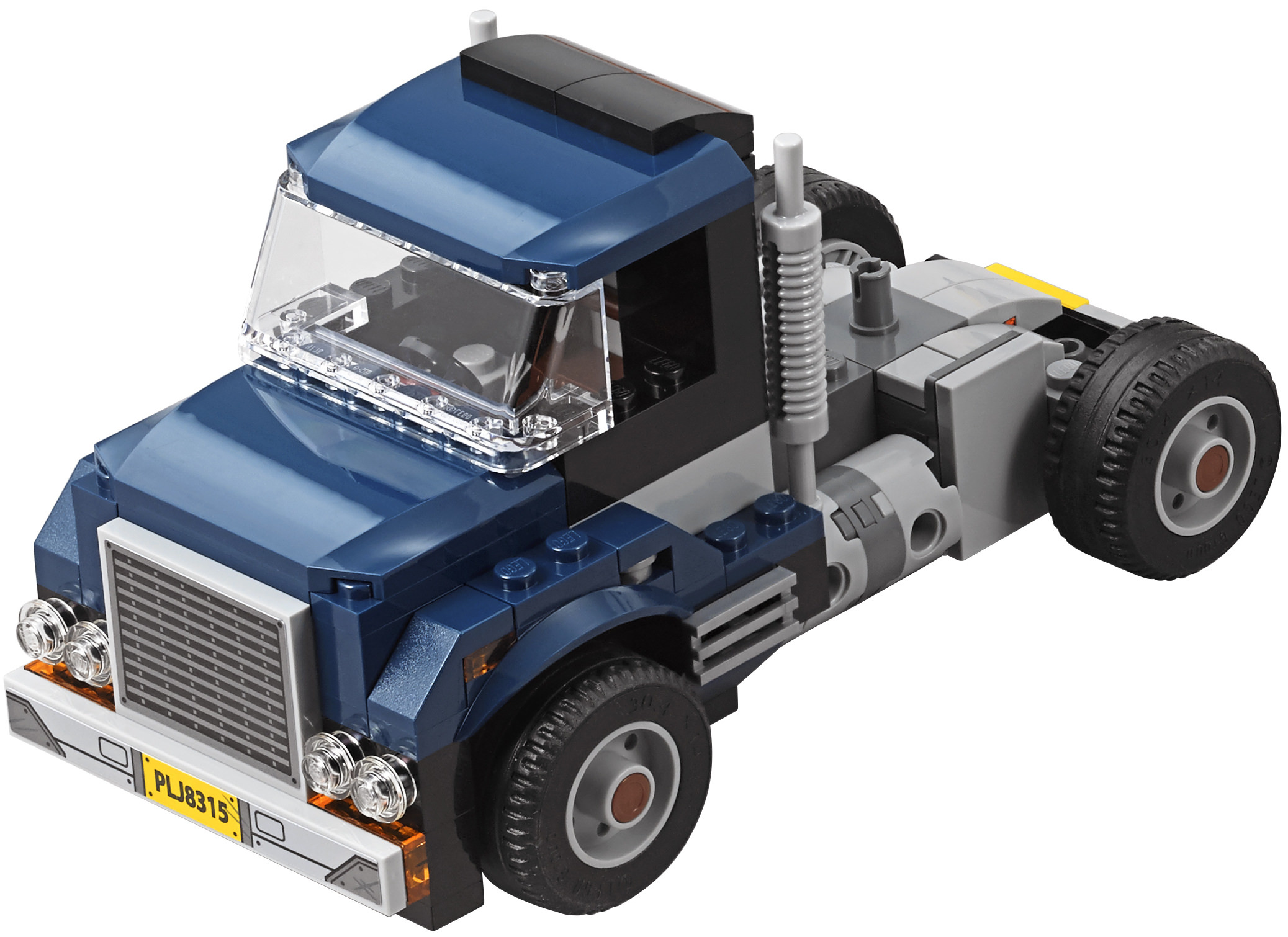 The second build in the set is a truck. It has a dark blue color scheme – like many of the vehicles in this new Fallen Kingdom subtheme – which I think looks good. Unfortunately, some parts towards the back of the driver’s compartment are black, not dark blue, which I think looks very odd – almost like LEGO didn’t have the time to recolor those pieces in dark blue. The front has some nice details, like a 4×4 piece with stickered grille piece, along with a 1×8 stickered tile with a numberplate and some more details. There are other nice details like the new mudguard piece above the front wheels and some pipes behind the driver’s compartment. 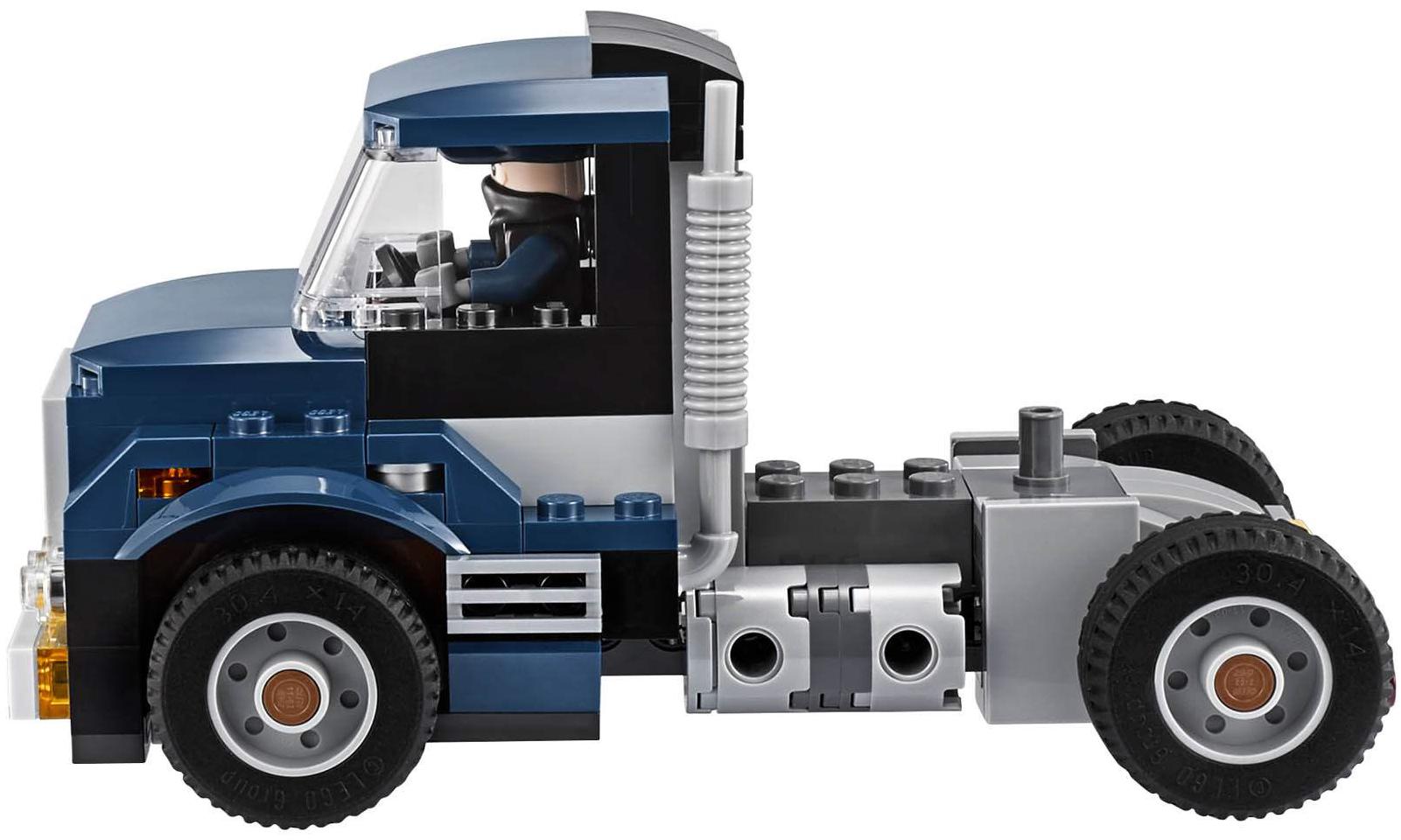 The side of the truck has some round bricks which presumably represent canisters of some sort – could it be fuel? I don’t know, if you do, let me know in the comments 🙂 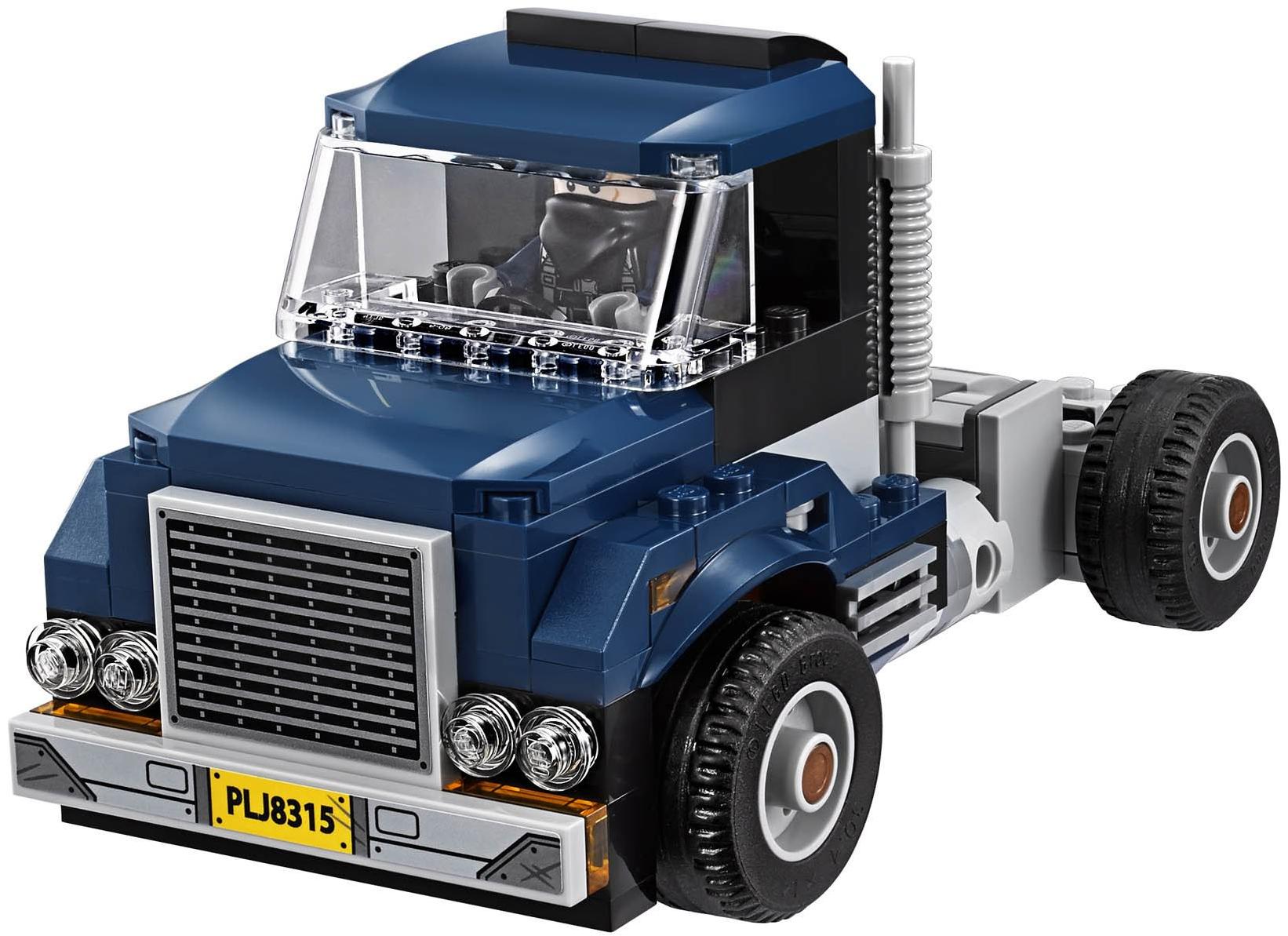 There’s only room for one guy in the driving compartment, but it’s fairly spacious for him. He has a red steering wheel inside along with a brown seat. 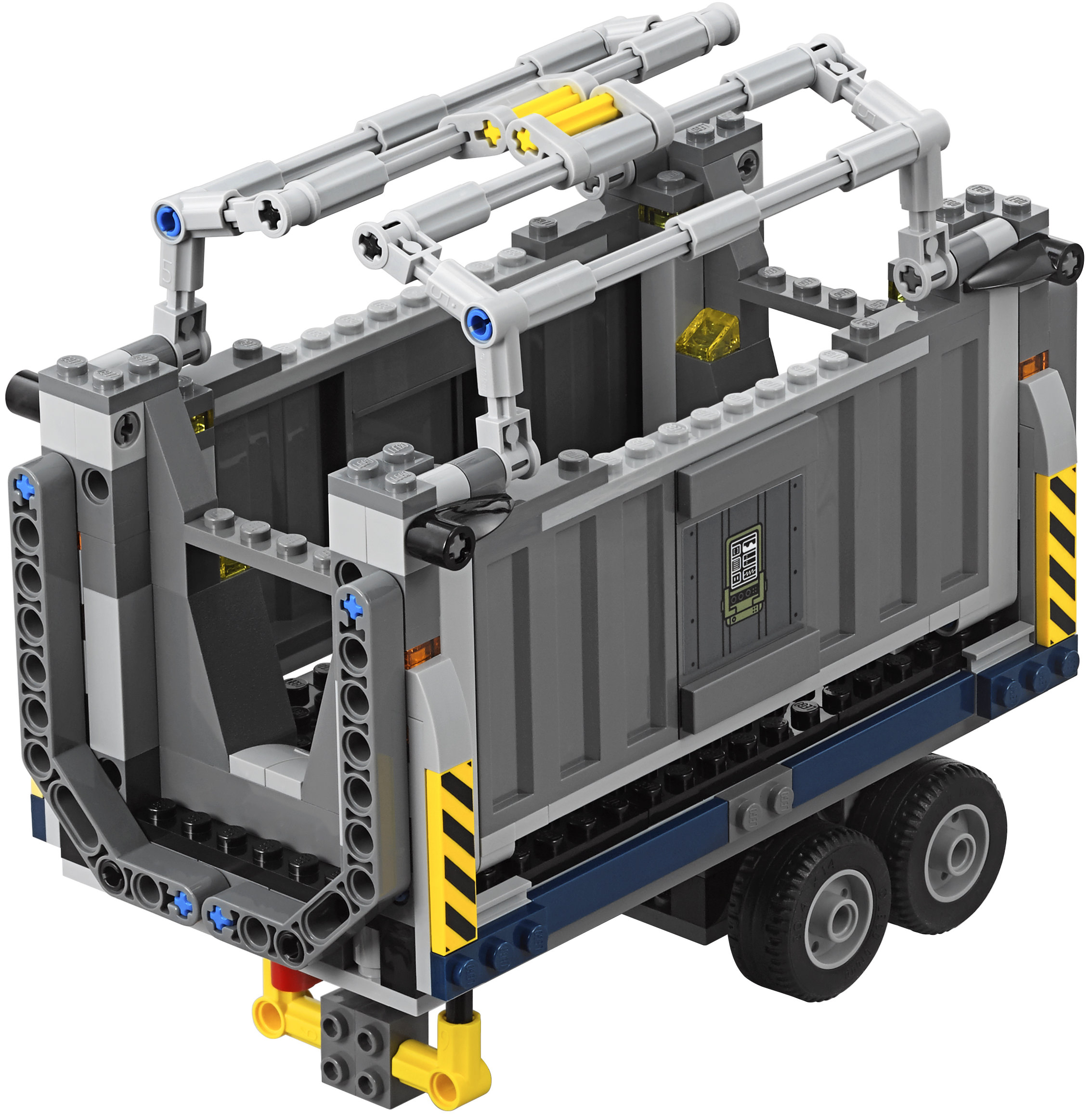 The final build is this trailer. It has a boxy design and is designed to transport the T-Rex. 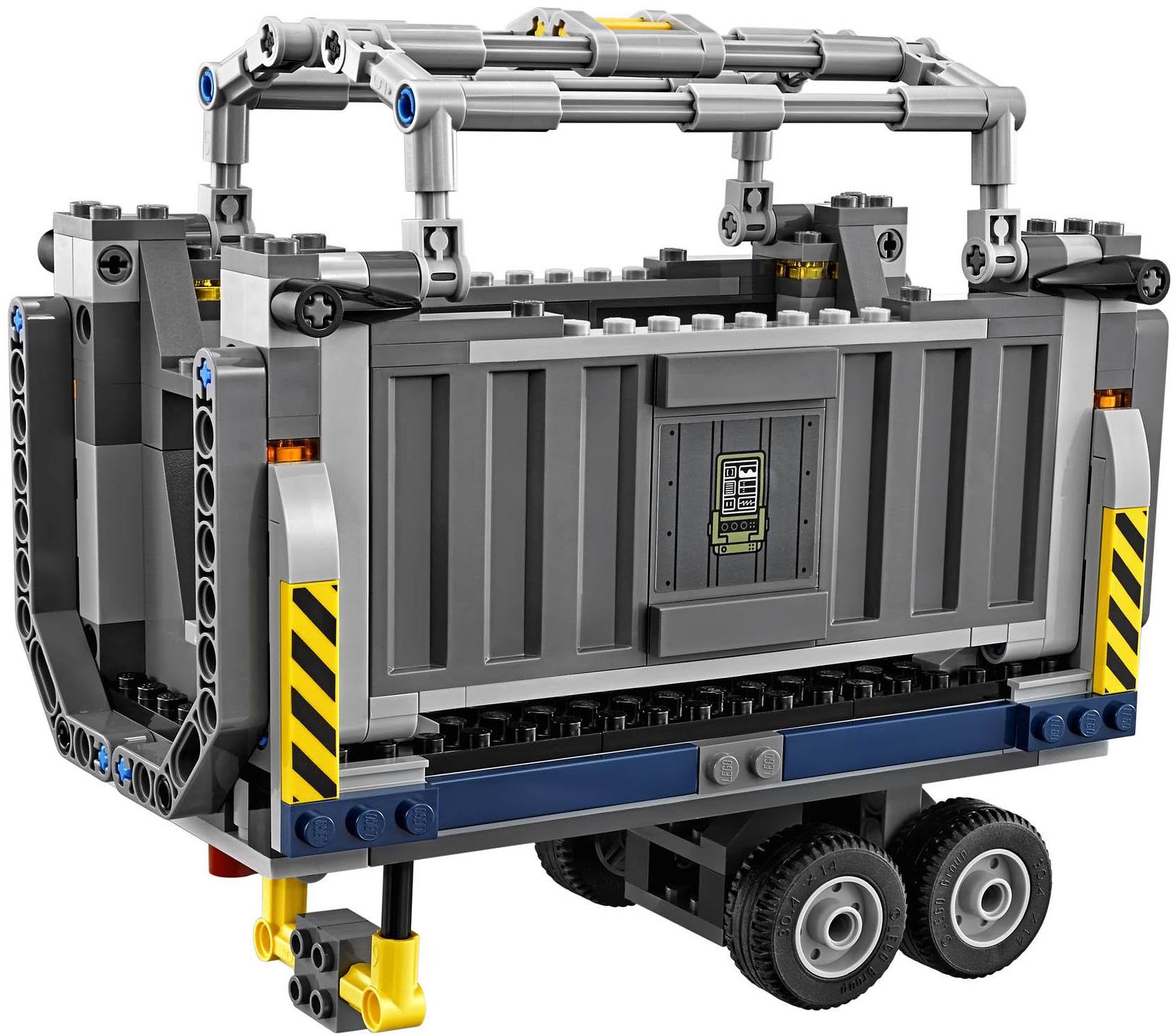 There are some nice details like the container wall elements used on the sides, as well as some sticker detailing. There are also some yellow pieces used for highlights, including the printed 1×4 hazard stripe tiles. 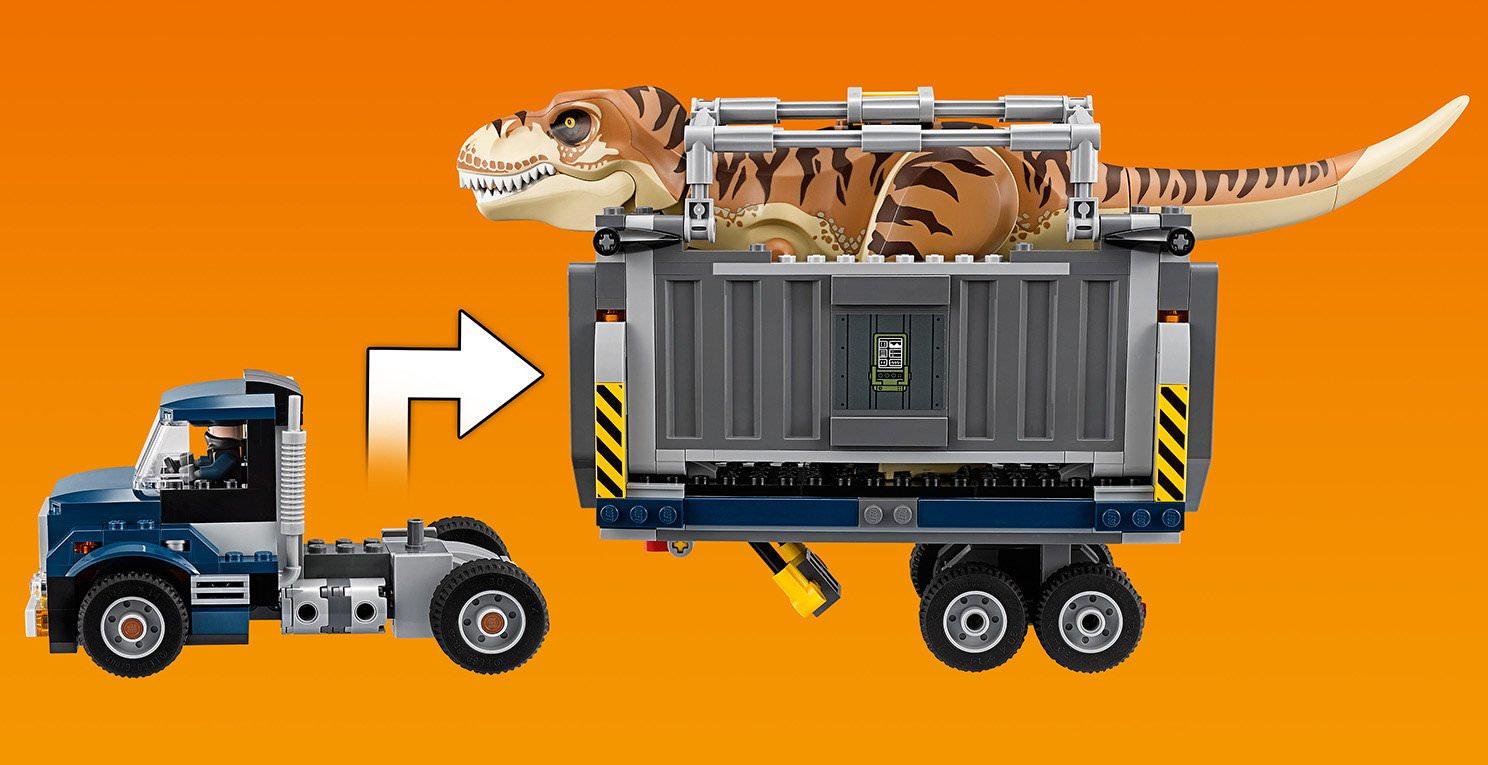 The trailer can be connected to the main truck via a Technic hole at the bottom that connects to the vertical Technic pin on the back of the truck. Since it is a one-pin connection, it is easy to separate the two builds if you like, and the trailer can pivot around the connection when driving.

The bottom of the trailer has a retractable Technic kickstand so that it can stand up by itself when it is not connected to the truck. This is a useful feature that makes sense. 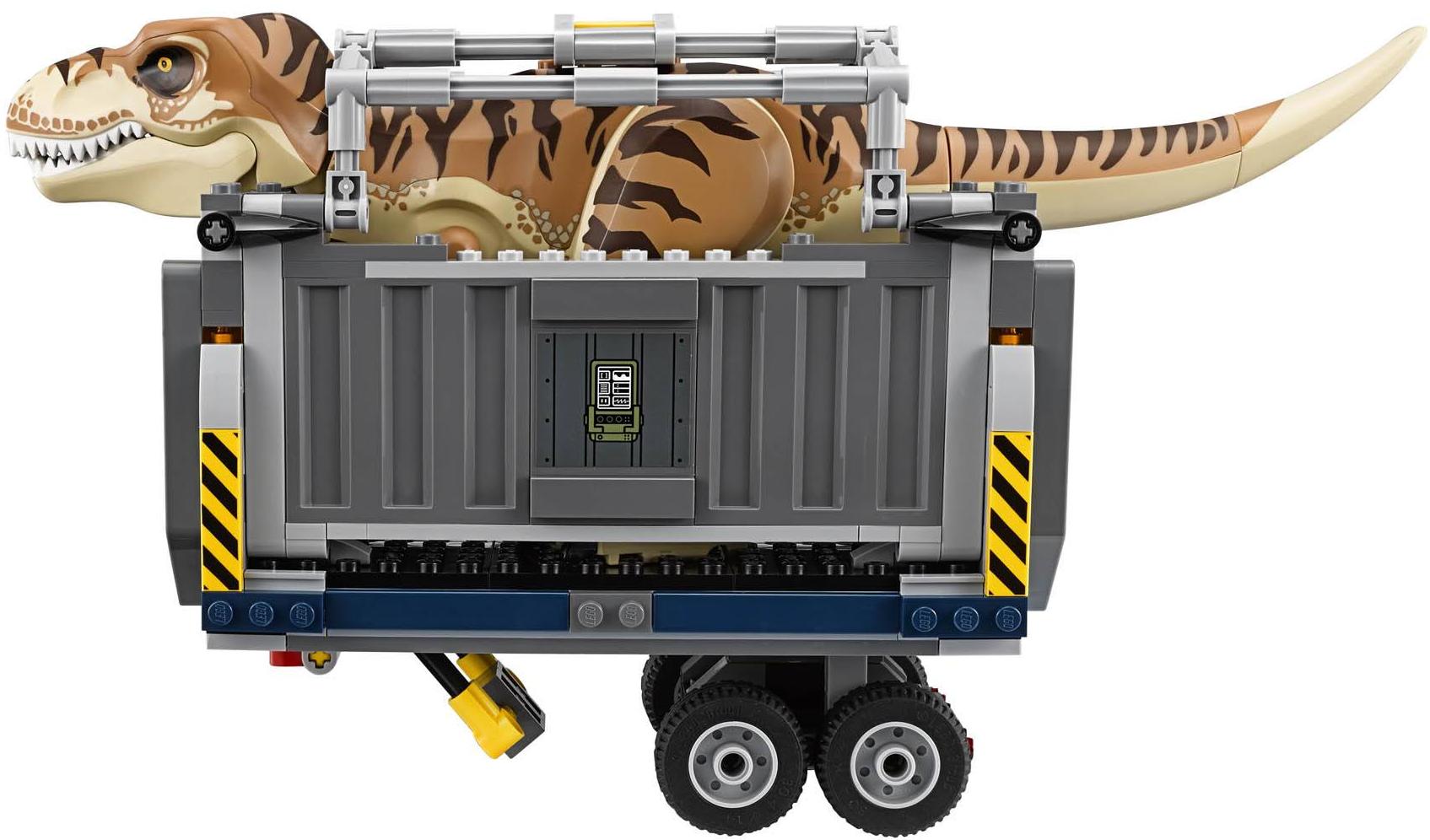 The T-Rex can be loaded inside of the trailer. It looks fairly secure, though it looks a bit cramp in there which could possibly make it feel kind of stressed. The sides of the trailer flank the T-Rex’s body and Technic parts close over the top securely. 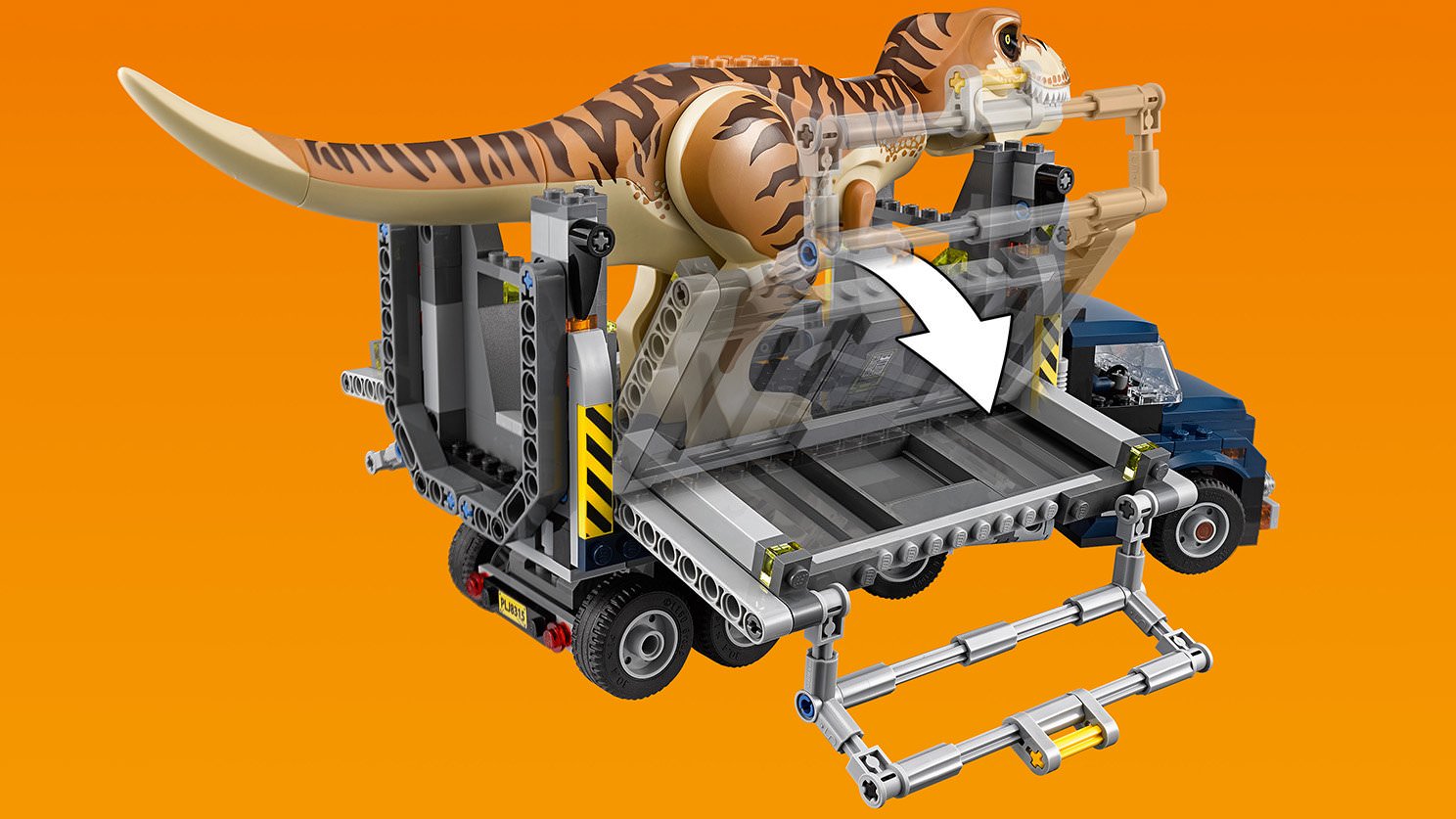 There are a couple of Bionicle eye pieces on either side which lock in the side walls. You can turn them to face downwards, which unlocks the side panels. The panels can then be lowered along with the Technic parts, which releases the T-Rex. 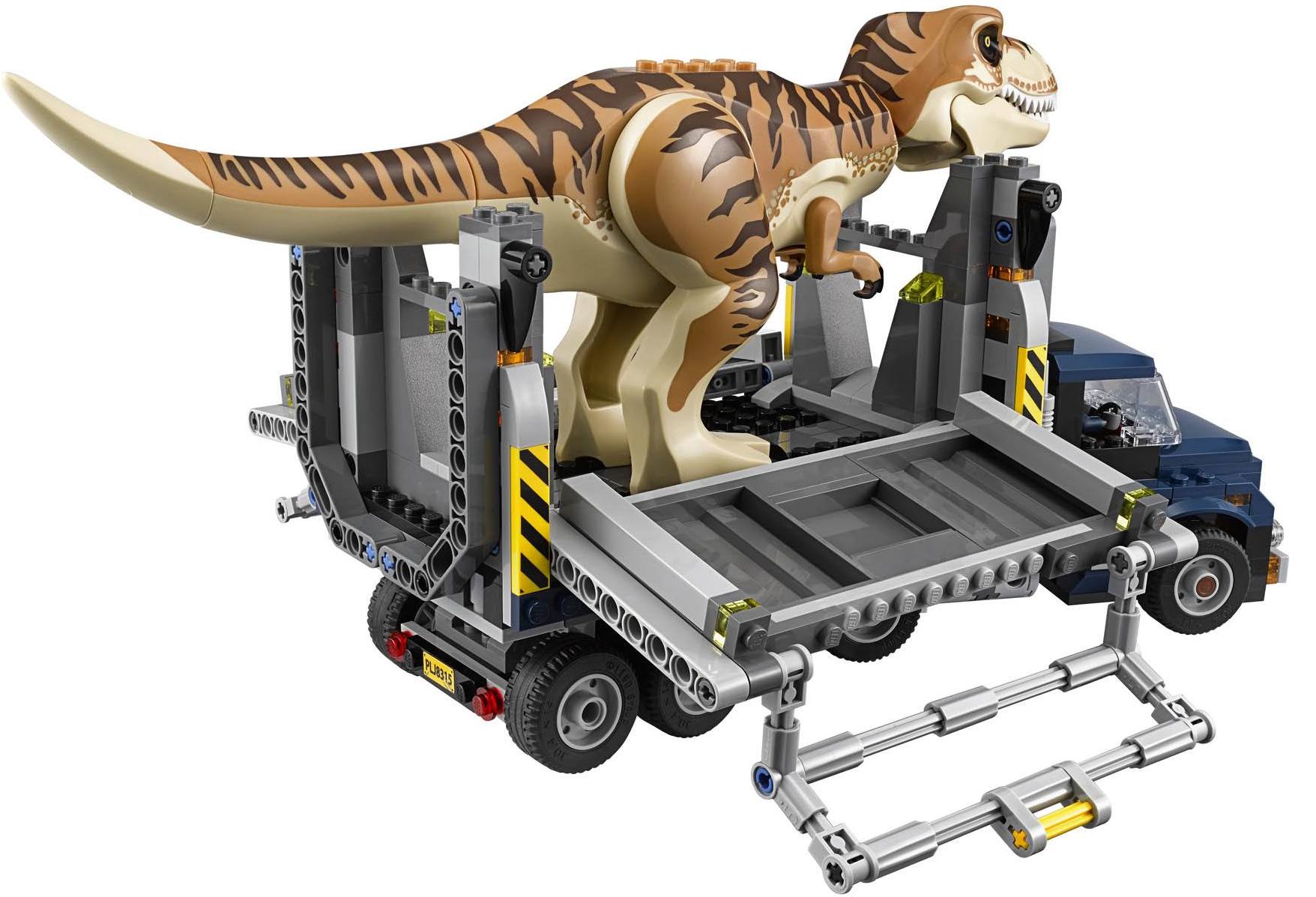 Now I guess it can kind of walk sideways down? I dunno. I wish it could walk straight in and back out but it’s too narrow and there’s a plate at the back which prevents a forward/backward connection. So I guess the T-Rex will have to dismount sideways. 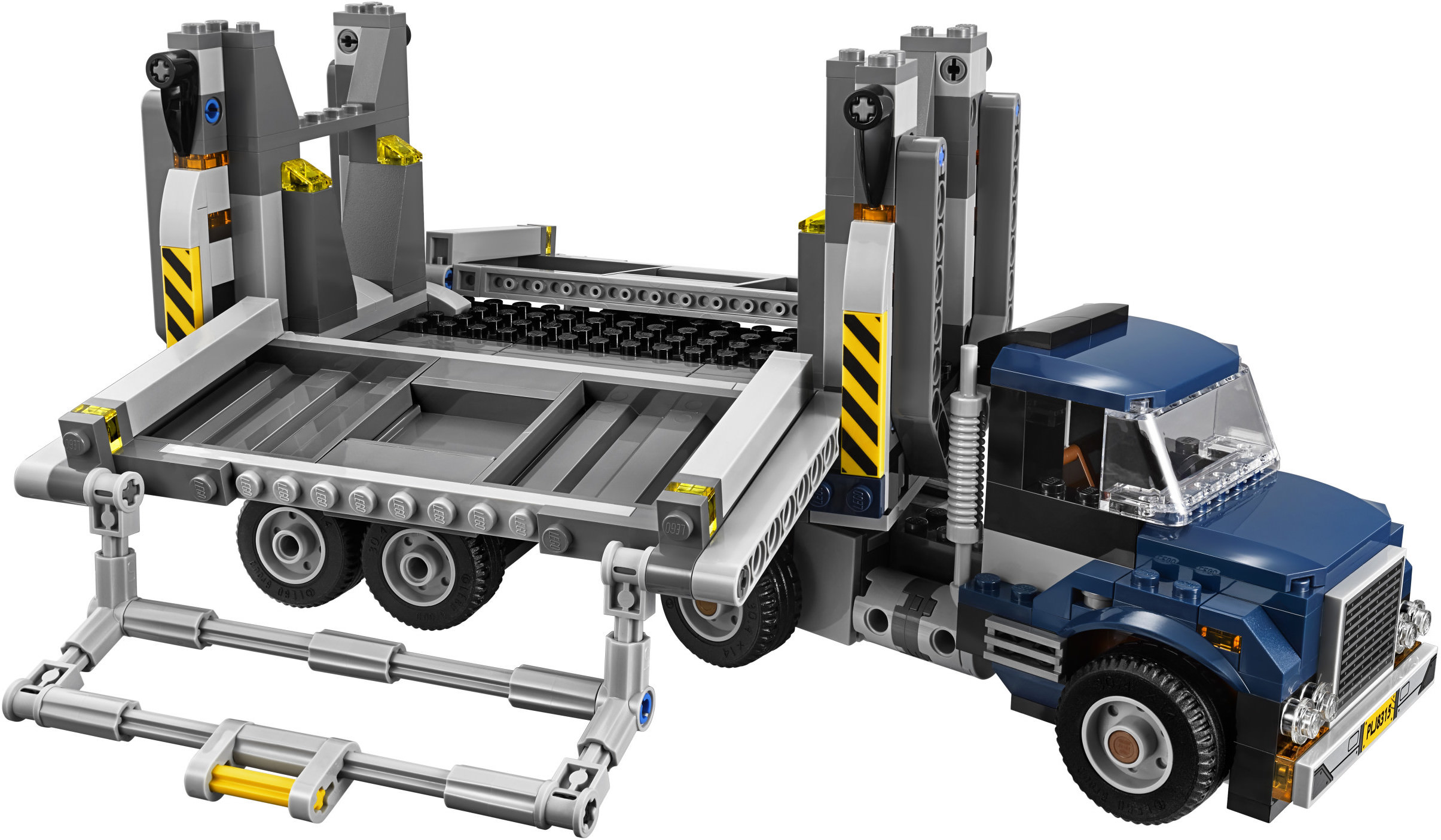 With the T-Rex removed, you can see there’s not much to the truck bed. Just a flat surface with studs for the T-Rex’s feet and a couple of lights. 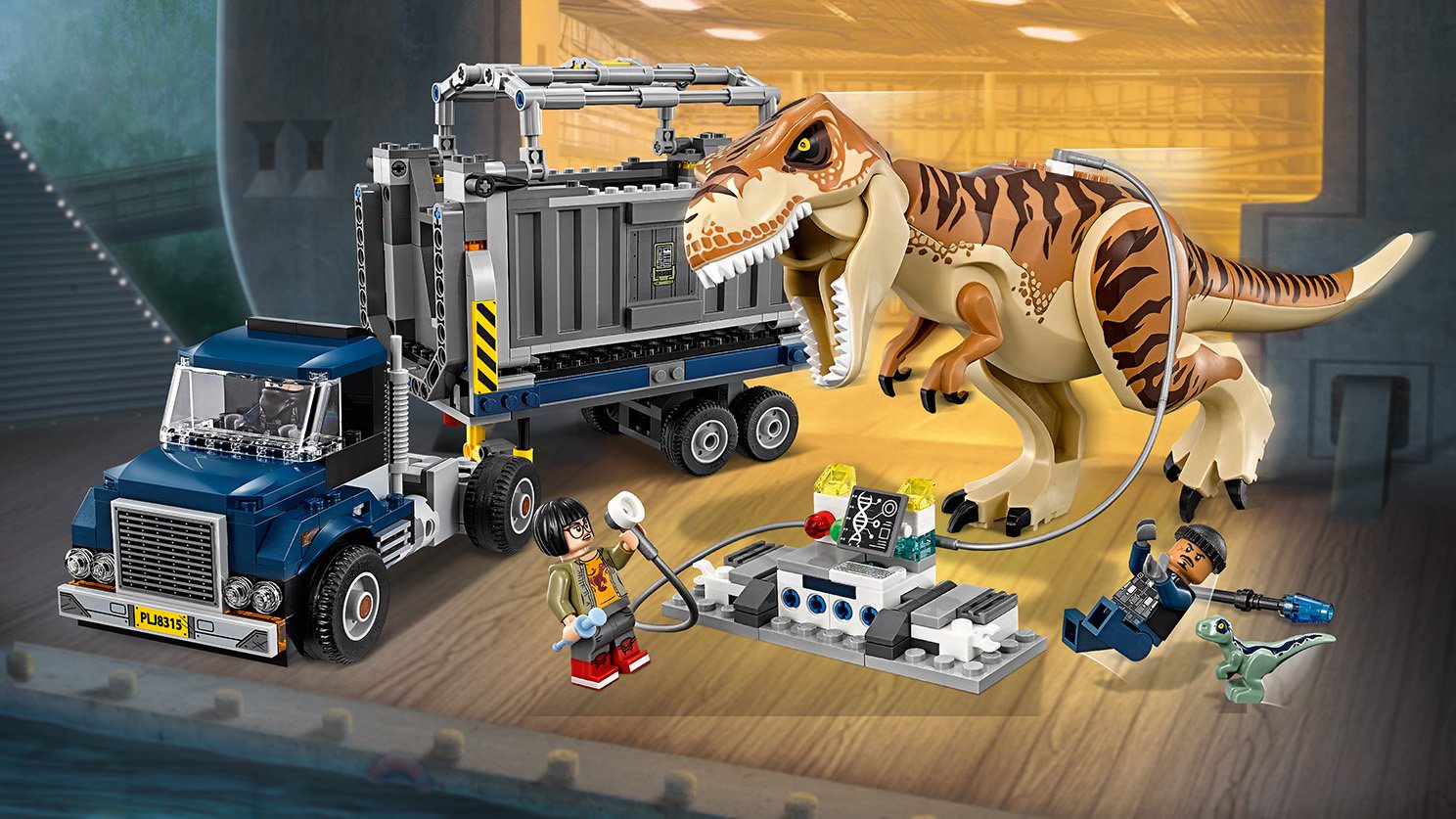 Okay, enough staring at the truck – the T-Rex is causing trouble, run!

That’s it for the set! Let’s see… the minifigure selection is not bad (because of that huge T-Rex) but I think one more named minifigure would have made it a lot better. The builds look pretty good, except for the mobile lab which feels shoehorned in and comes across as the designers trying to use up the leftover budget. The description says the mobile lab can be connected to the transporter but I have not yet found a proper way to connect it. Playability is good because the truck’s features work well otherwise and the T-Rex is good fun to play with. The price is okay – £59.99 pounds in the UK is tolerable for me, as is the $100 Australian price – but I think it should have been slightly cheaper in the United States and New Zealand – maybe around $60 USD and $120 NZD. It’s still a tolerable price, though, no doubt bumped up by the inclusion of the big T-Rex mold, and on the whole I think this is a good set.

Thanks for reading! Let me know your thoughts in the comments section below 🙂