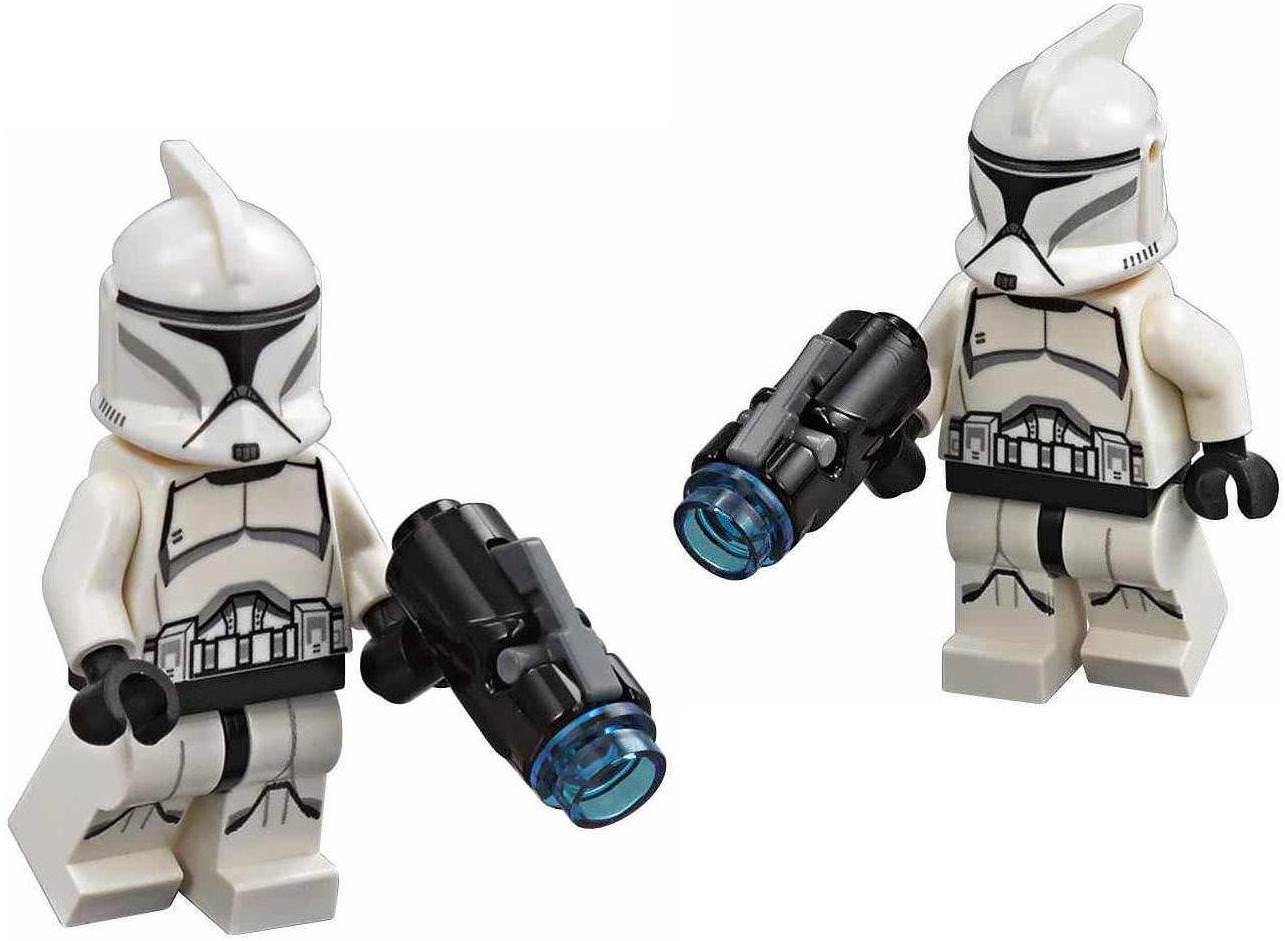 The first two minifigures in the set are a pair of Phase I Clone Troopers. These minifigures last appeared in a set from 2013 so I am happy to see them here. They have not been updated since their 2013 appearances so you can integrate them straight into your clone army if you have one. The printing is good all around. Both clones are armed with stud shooters which is annoying, but ah well. 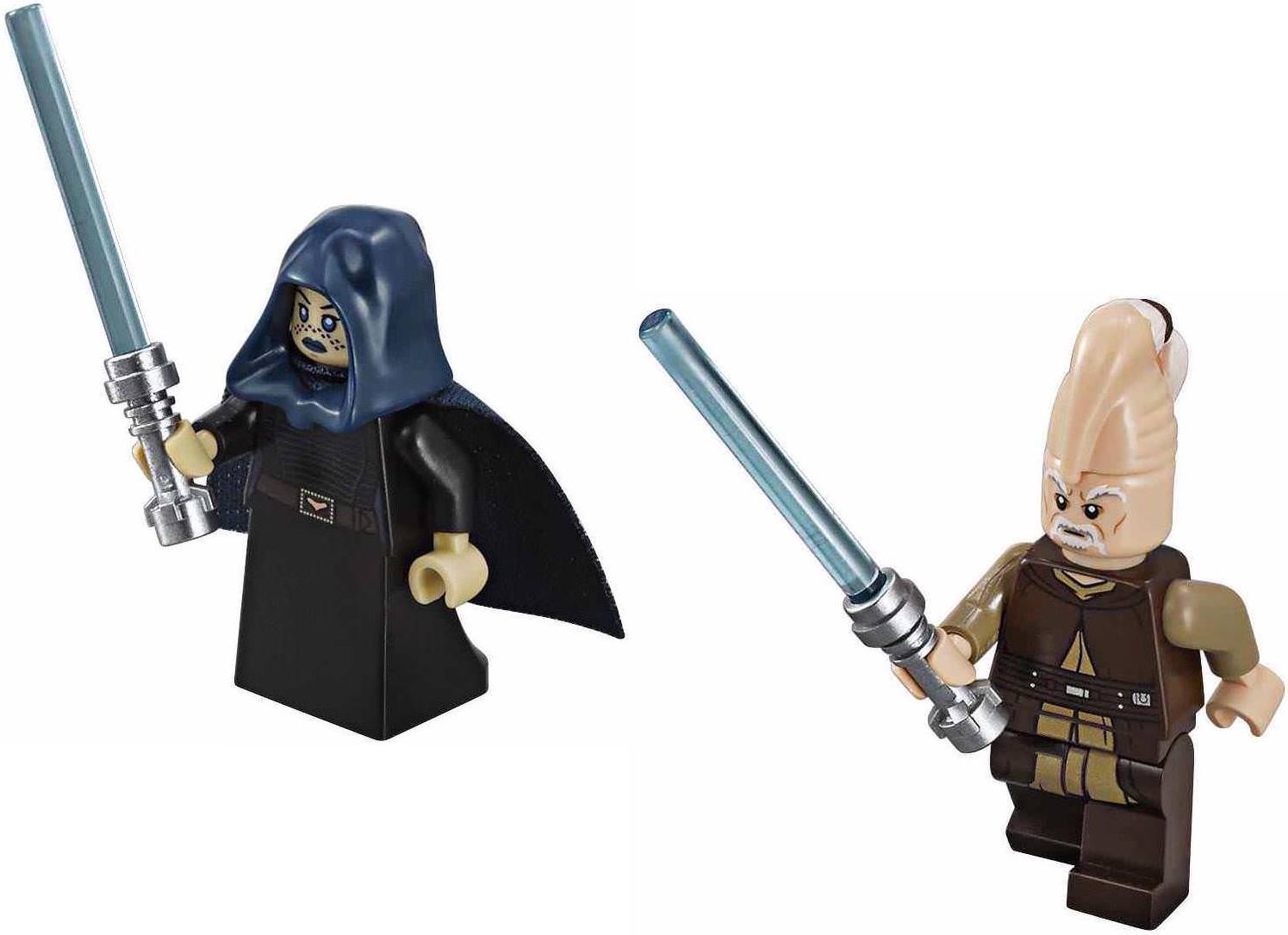 The other two minifigures are a pair of named Jedi. LEGO nowadays seems to like putting named characters in battle packs, which will no doubt be frustrating to many army builders but I’m sure many kids who can only get one battle pack will appreciate it. I wonder if LEGO’s research data indicates very few people get multiples of a battle pack. Anyway, these two are Ki-Adi Mundi and Barriss Offee.

This is the third LEGO Barriss minifigure, with the first one from 2010 appearing in 8091 Republic Swamp Speeder. This new minifigure looks pretty good – she wears a dark blue hood and a soft dark blue cloth cape. She has a double-sided tan-colored head, with a normal expression and then a grimaced one for battle. Her torso is black and actually not super different from the 2010 one, but that one nailed it well anyway. Instead of legs, she has the new curved slope piece for 2018, which is a nice piece but I think it looks a little odd when it’s unprinted (though Barriss’ dress is black in the movie).

Ki-Adi Mundi is back, marking his second appearance since 2011. This is the first non-Clone Wars version, which has normal eyes. His extended headpiece is the same and looks good, with molded and printed detail. He has a single head print with white facial hair and a closed mouth – which means he’s not currently asking about the Droid Attack on the Wookiees. He has a brown Jedi robe with printing that continues onto the legs. Like Barriss, he has a blue lightsaber. 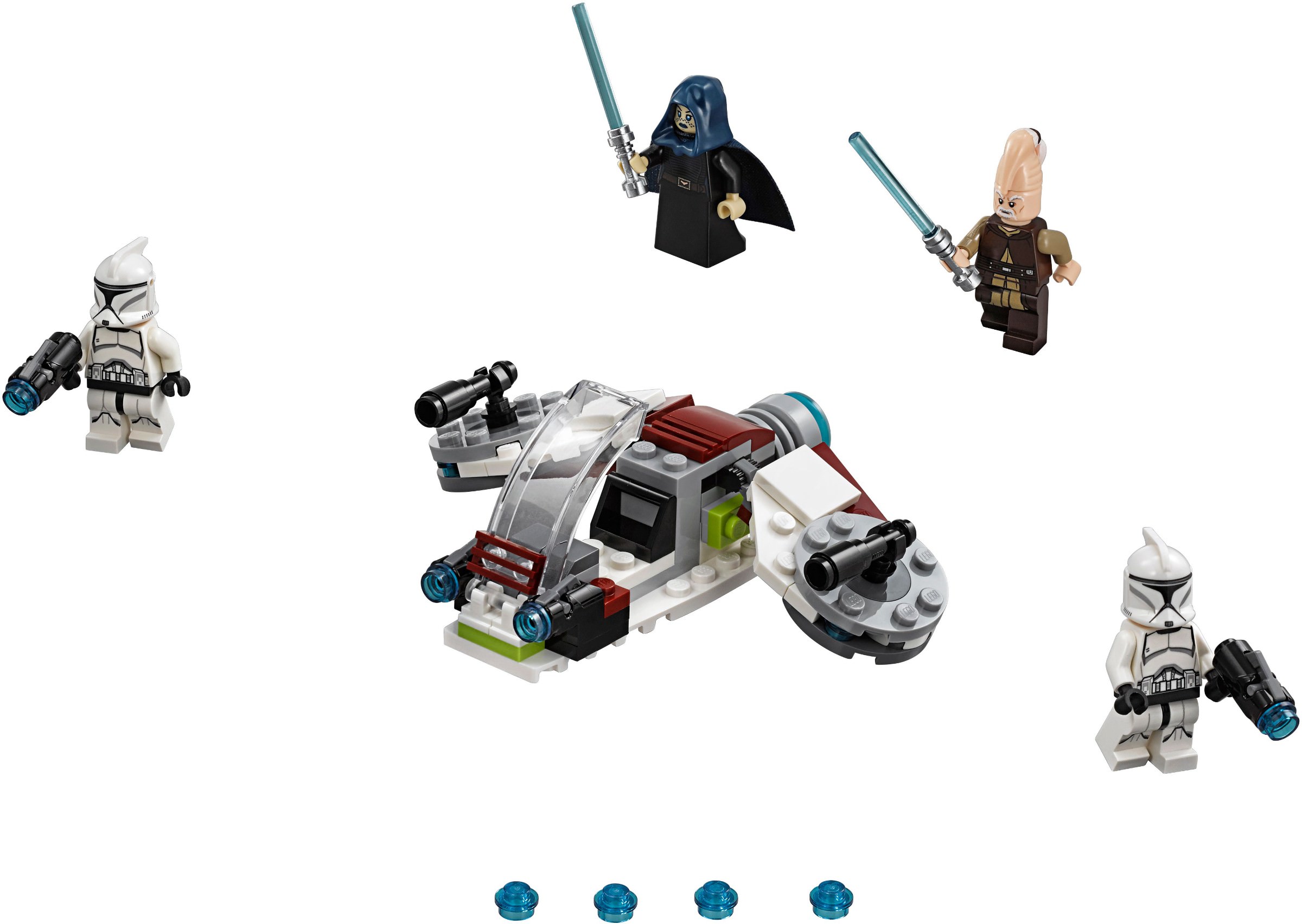 Now, on to the build of the set. 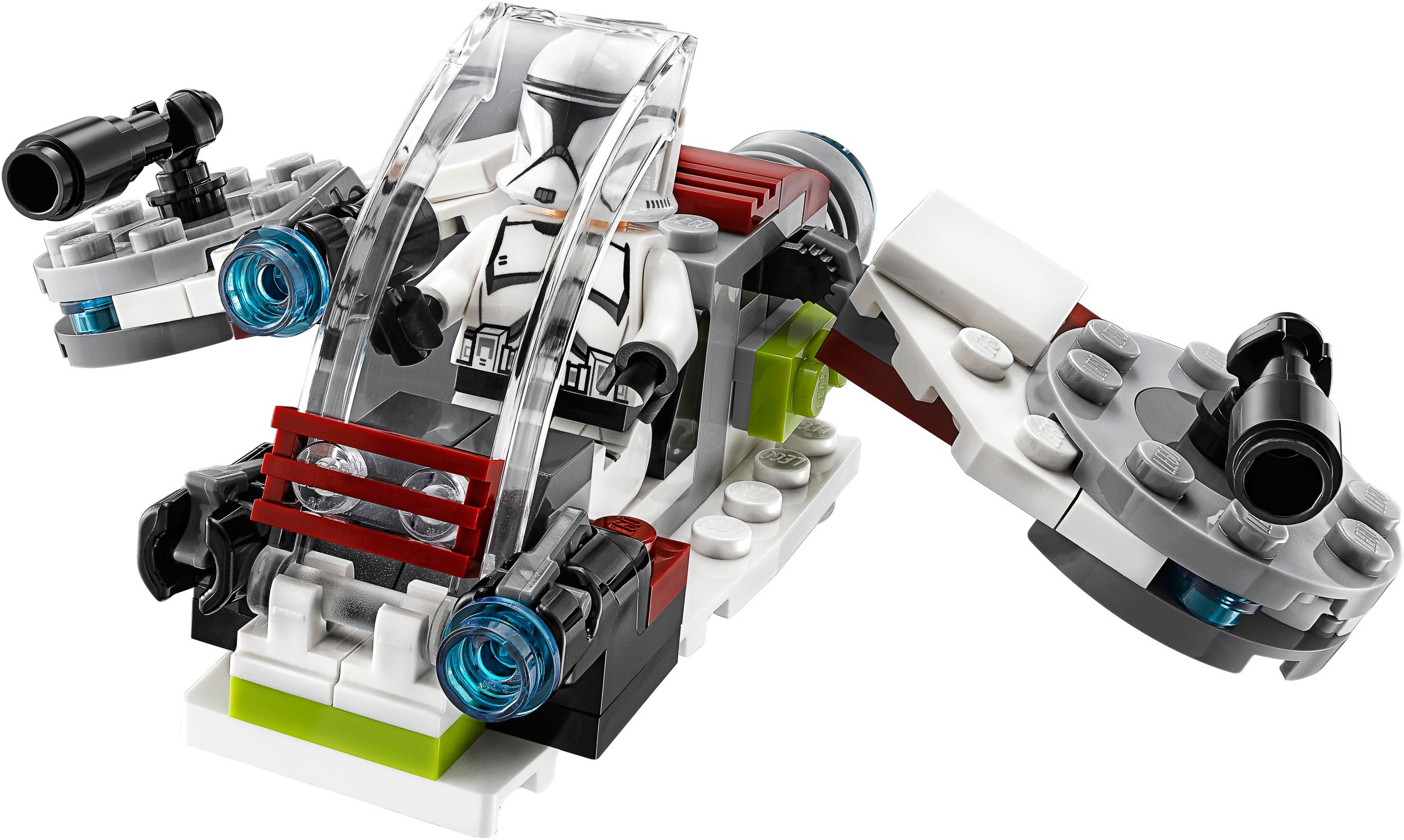 Like many battle pack builds (except for 75207), this build is made-up. However, it uses the white, dark red, and lime green color scheme that is used by Republic Gunships – and the shape even resembles that of a Republic Gunship! Maybe this is a kind-of chibi version of that ship. That’s kind of cool. 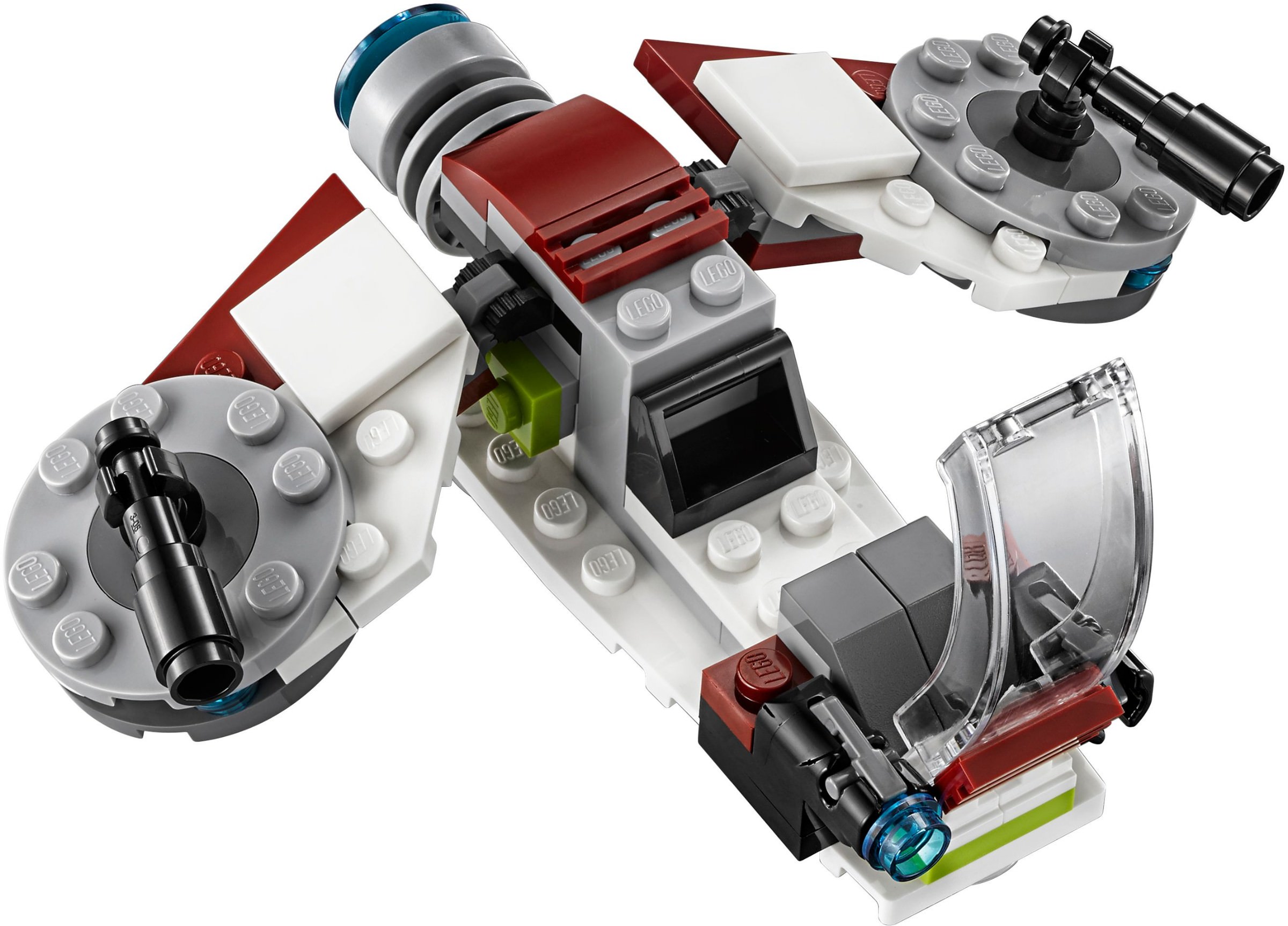 The base of the speeder is an angled plate. A pair of wings extend out of the back on click hinges, and you can move them up and down if you like. The wings have brick-built cannons on them that can rotate 360 degrees. 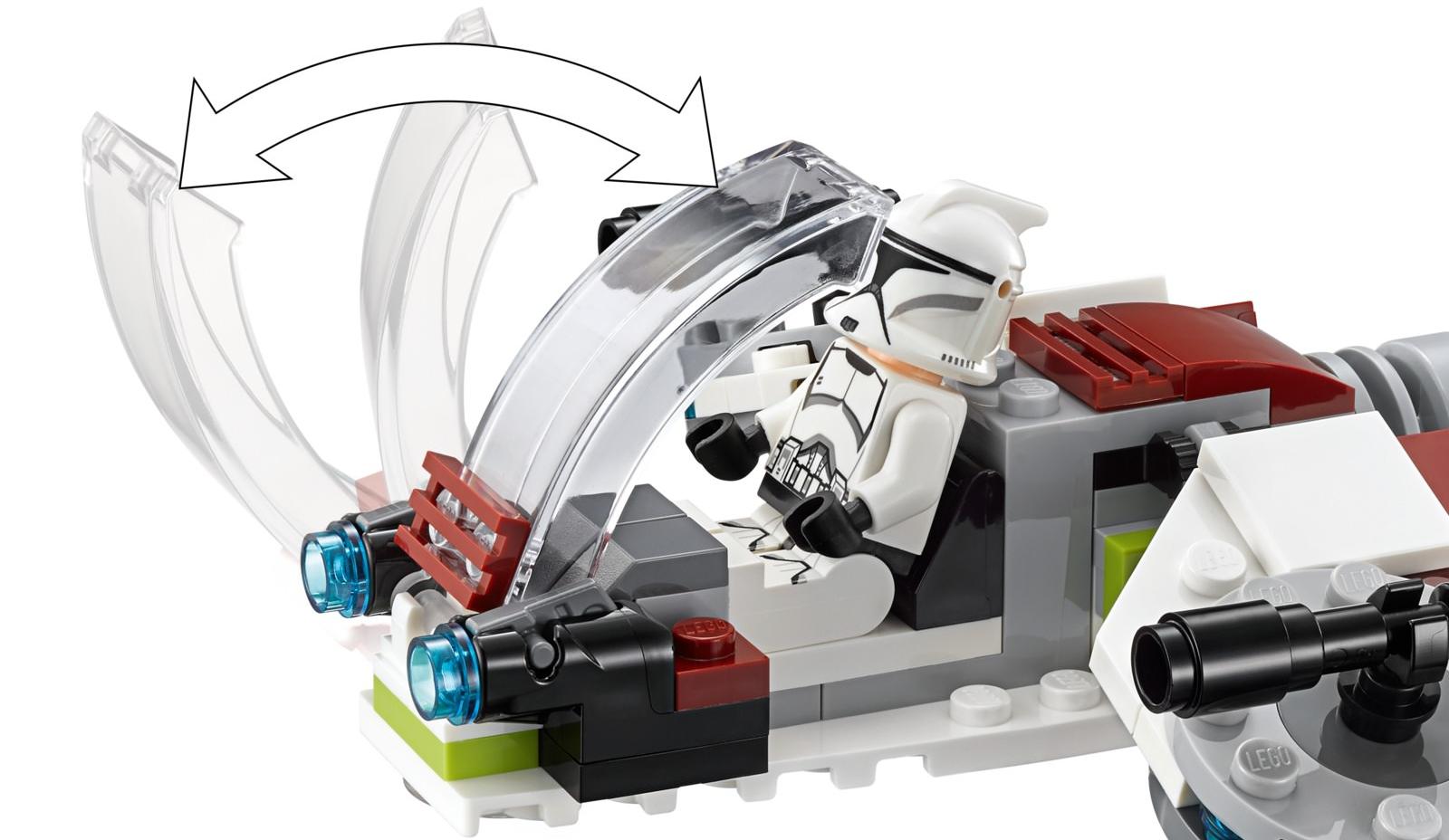 There’s only space for one clone which is a little disappointing to me – I would’ve liked it to be able to seat both clones. The seat has a foldable curved windscreen piece that can be hinged back in front of the clone. It doesn’t fully block him from any shrapnel or blaster fire, but I guess it works. 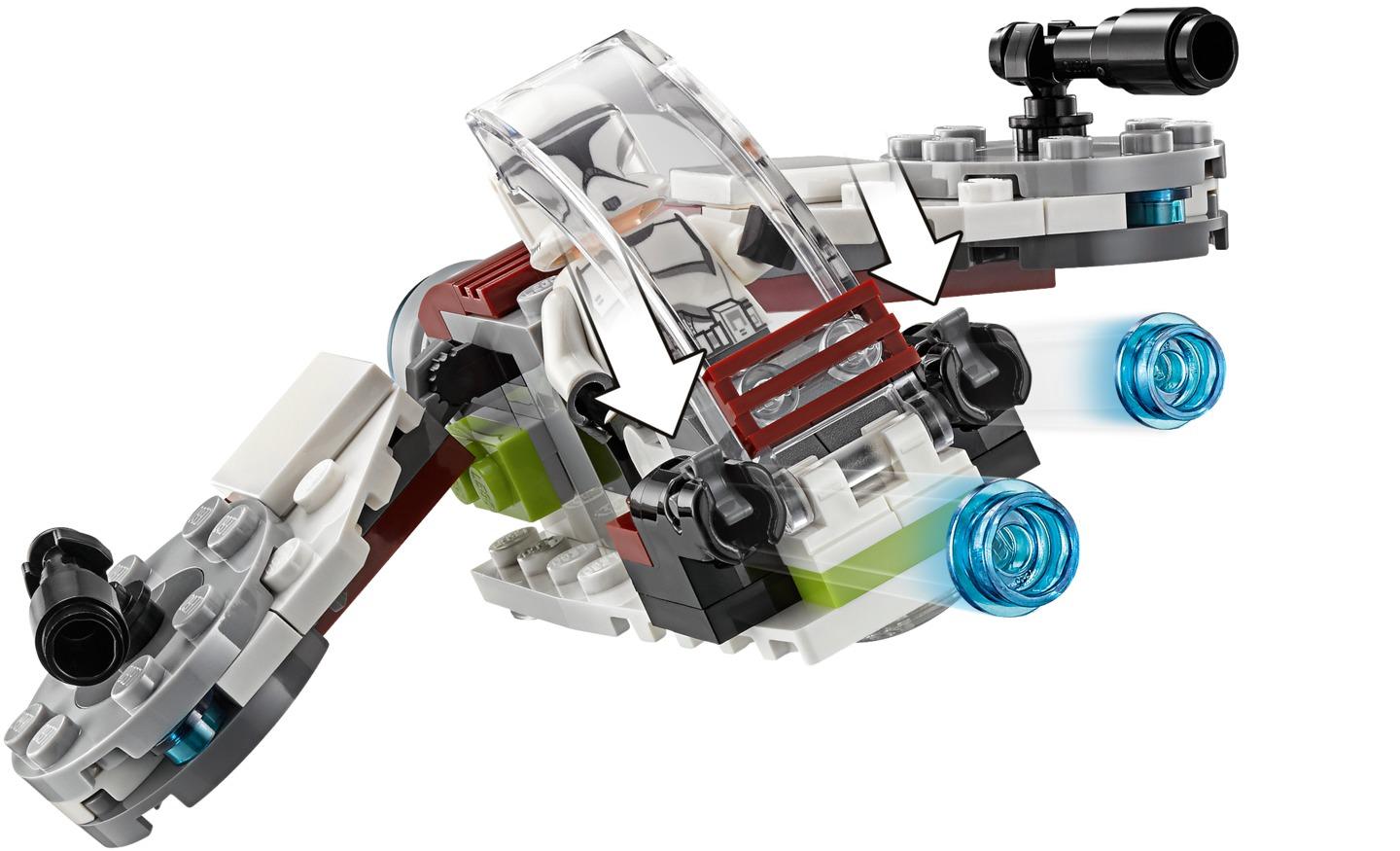 There are also a pair of stud shooters at the front which – like the hand-held stud shooters of the clones – fire off translucent dark blue studs. I don’t mind these stud shooters here though. 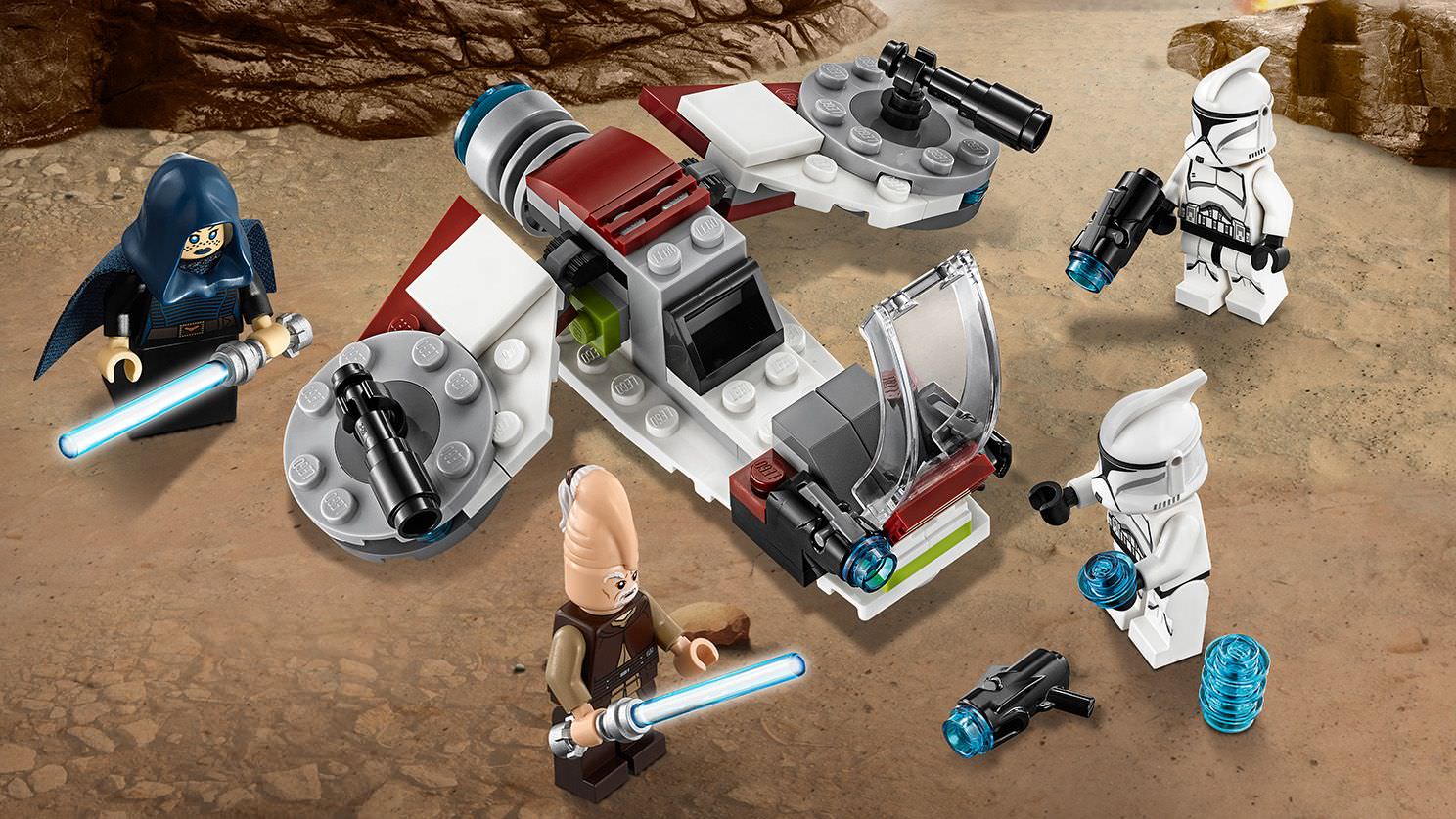 And… that’s it for the set!

On the whole, I think this is a good set – just not for army building. The two new Jedi minifigures included are very nice, and the clones are satisfactory (it’s nice to see LEGO Phase I Clones making a comeback). The build is whatever but it’s not inherently terrible either.

Thanks for reading! Let me know your thoughts in the comments below 🙂