All three minifigures in the set are generic guards. This first one is female. She still wears the standard guard outfit, which looks nice with its black, dark blue, and dark grey color scheme. She uses the double-sided Jyn Erso head from 75155 Rebel U-wing Fighter and 75171 Battle on Scarif (though it was later reused for Black Widow in 76101 The Outrider Dropship Attack). She has a dark brown ponytail piece which is an old element but it looks good. Her weapon is a tranquilizer rifle.

The second minifigure is a person of color. He reuses the head previously used on Shocker in 76083 Beware the Vulture and Killmonger in 76100 Royal Talon Fighter Attack. His hairpiece is reused from B. A. Baracus in the 71251 B.A. Baracus Dimensions Fun Pack, but it’s not that common so it’s nice to see here. His torso and legs are the standard Jurassic World Fallen Kingdom guard outfit, and he is armed with a shock prod. The shock prod uses the same pieces as the one in 75933 T. Rex Transport, though the lightsaber hilt used as part of the build is orientated in a reverse way.

The final guard – like the other two – wears the same guard outfit. He uses a generic head which has appeared in many, many sets: from 76046 Heroes of Justice: Sky High Battle (for Lex Luthor) to 75001 Republic Troopers vs. Sith Troopers Battle Pack (for a Sith Trooper). He wears a black helmet that has a black night vision goggles visor attachment attached to it, and I think it looks really cool. On the other hand, his accessory – a plain black walkie-talkie – is rather bland. 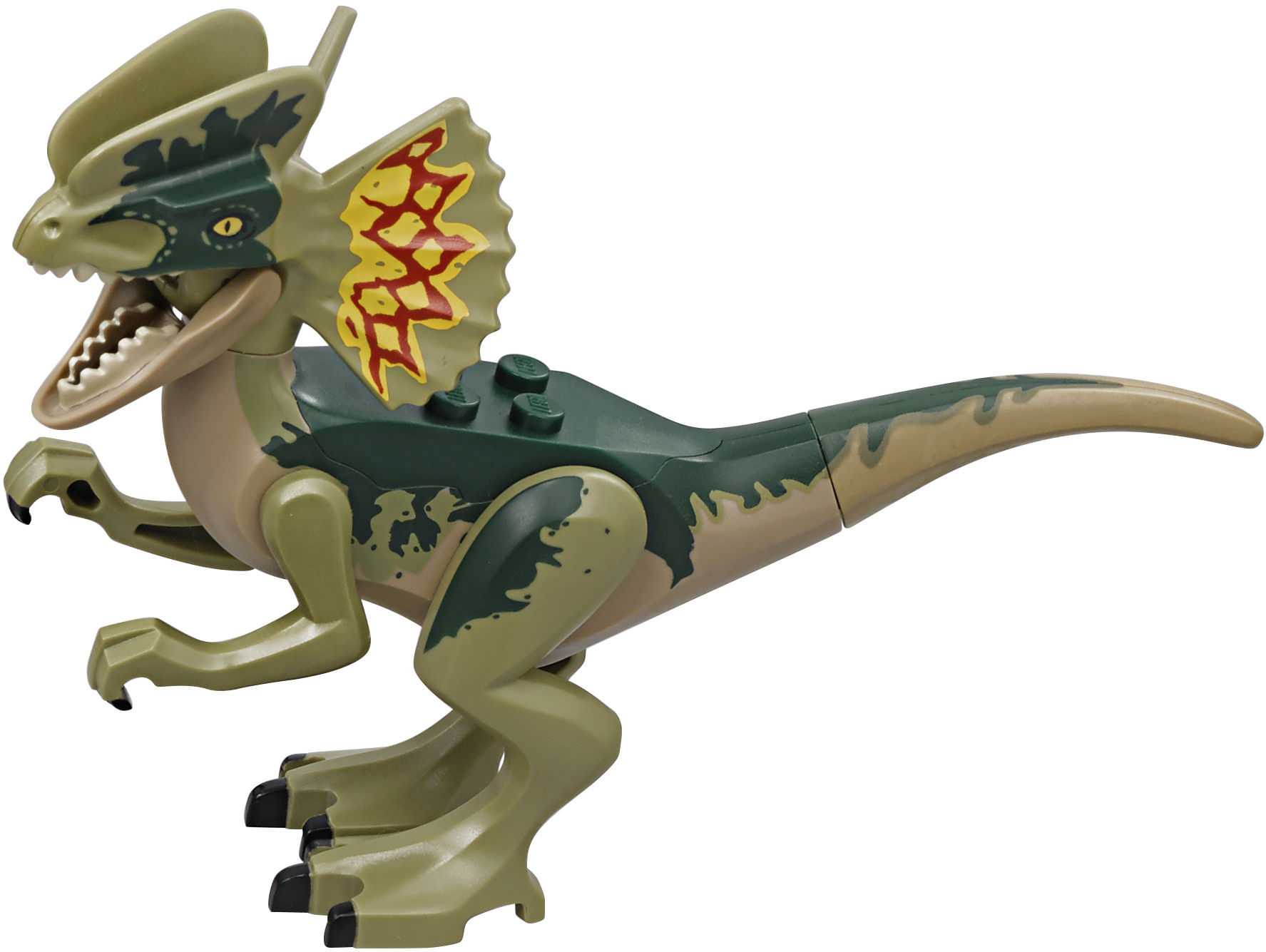 The dinosaur of this set is, as the set name suggests, a Dilophosaurus. I am not a dinosaur expert, so unfortunately I can’t impart any dino knowledge about this guy, sorry 😅 Interestingly, it uses the hands, body, and jaw of LEGO raptors like Blue in 75928 and the one in 75932. Its legs, however, are a different mold, as is its head. It’s now olive green and dark tan (instead of the lime green one from 2015) which I think looks much more realistic – I prefer it. 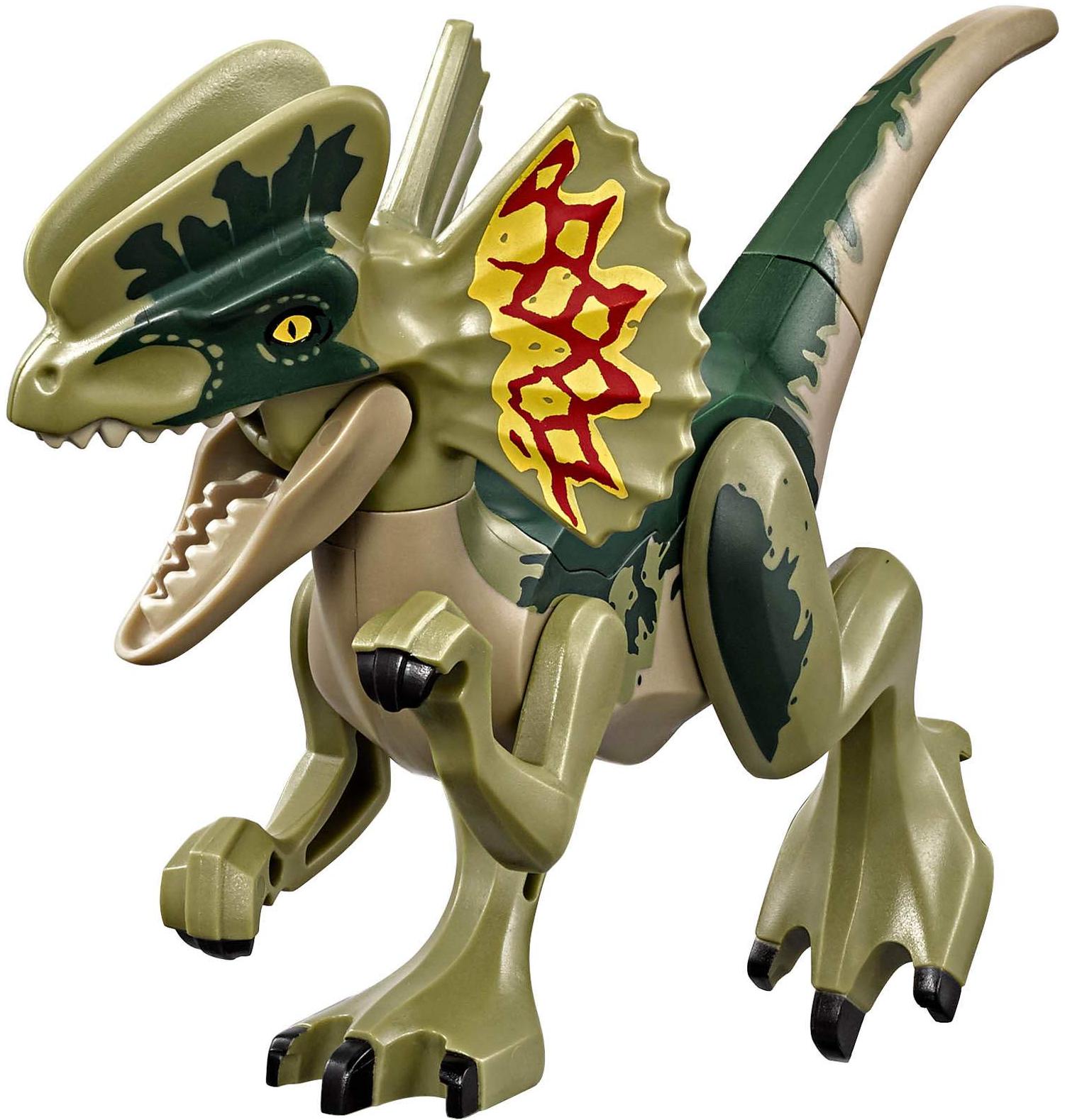 Like the Raptors, the jaw can be opened and closed. There’s technically no in-between, though. 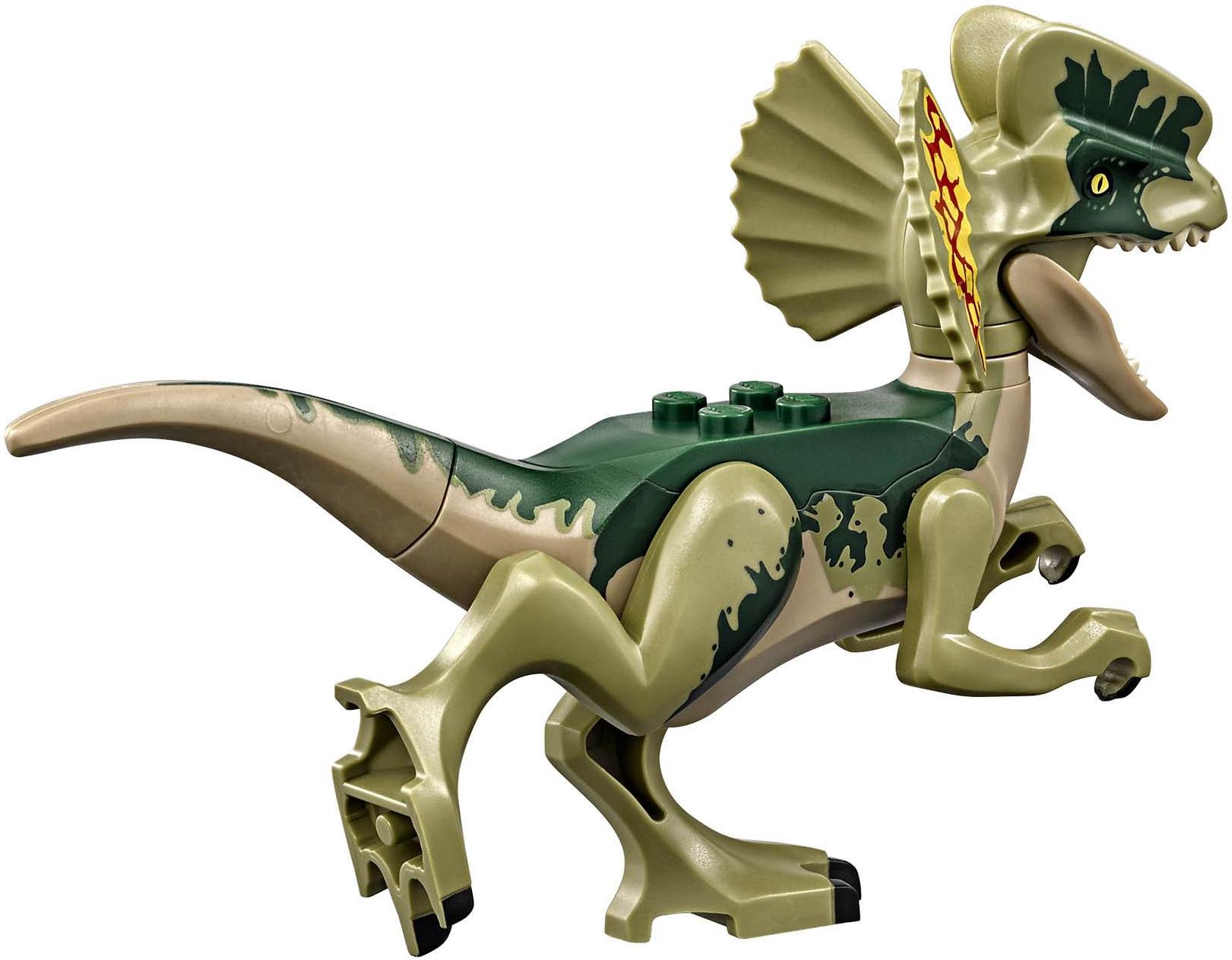 The legs and arms are on Technic pins so can be posed as you please, though it tends to fall down if you pose the legs. However, you can attach the legs to a studded base and then you can pose it as you like without balance issues. 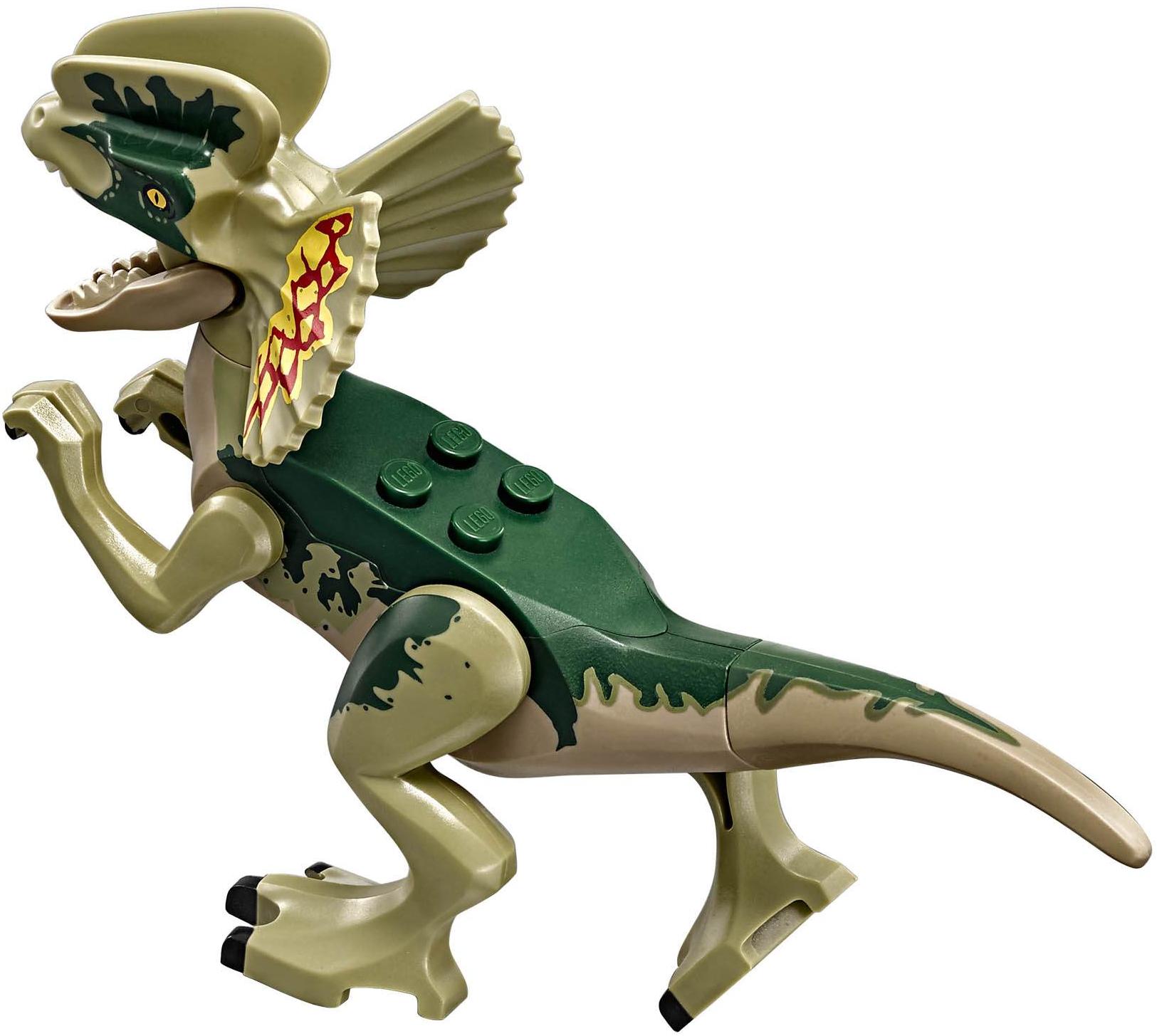 There are dark green highlights throughout, and most of them are found on the top of the body. There are also four studs there so a minifigure can ride the Dilophosaurus if you like.

All in all, the minifigure lineup for this set is okay – the guards, Dilophosaurus, and the baby raptor look nice but they’re not super special. There’s not even a named character in this set, which is disappointing. 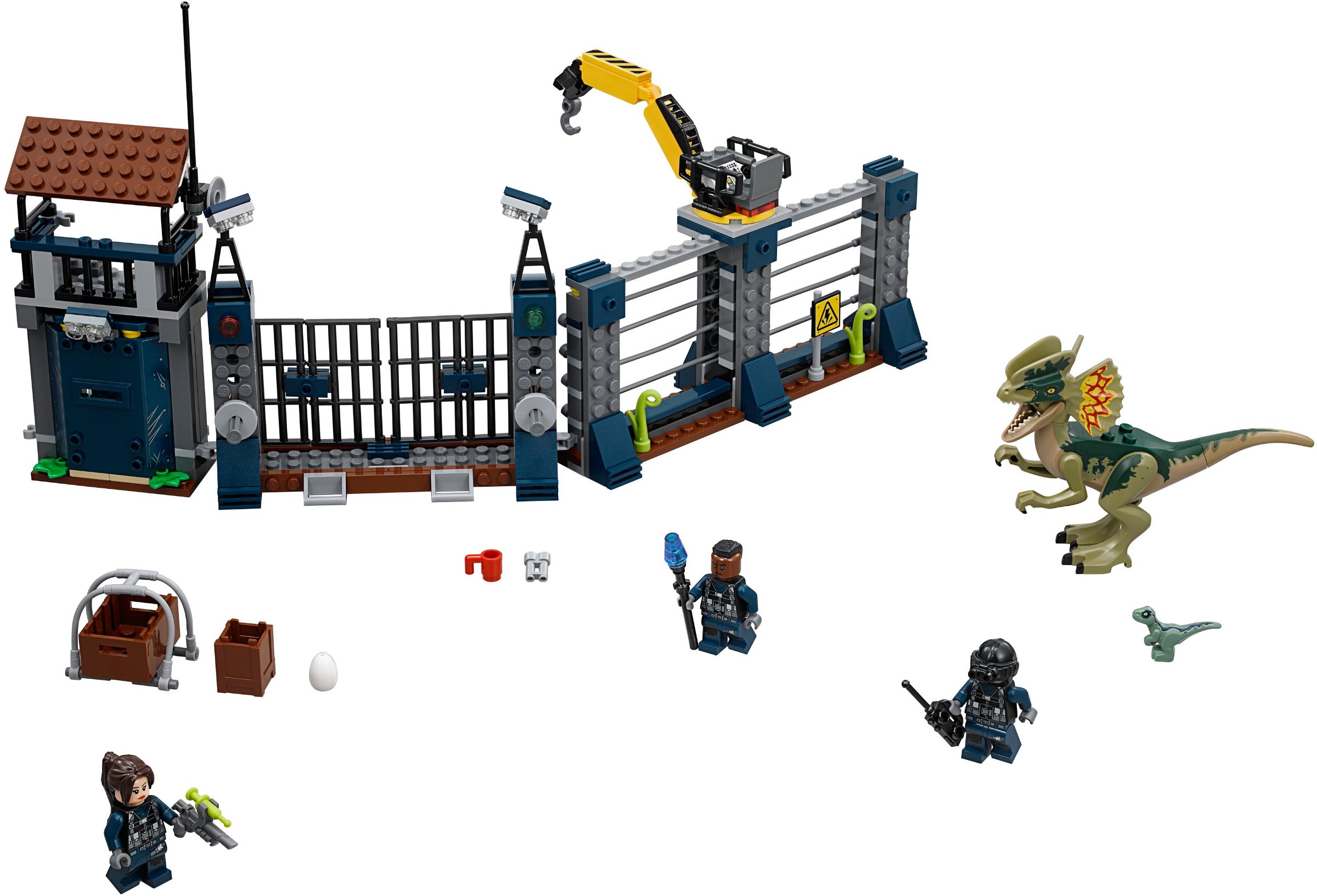 On to the build! The build is basically a wall with an outpost tower – pretty standard if you ask me. I do like the color combo of dark blue with grey, as well as the brown on the bottom for earthy tones. It splits into three sections – the tower, the gate, the electric fence – and the tower and fence can swap places thanks to clip connections. 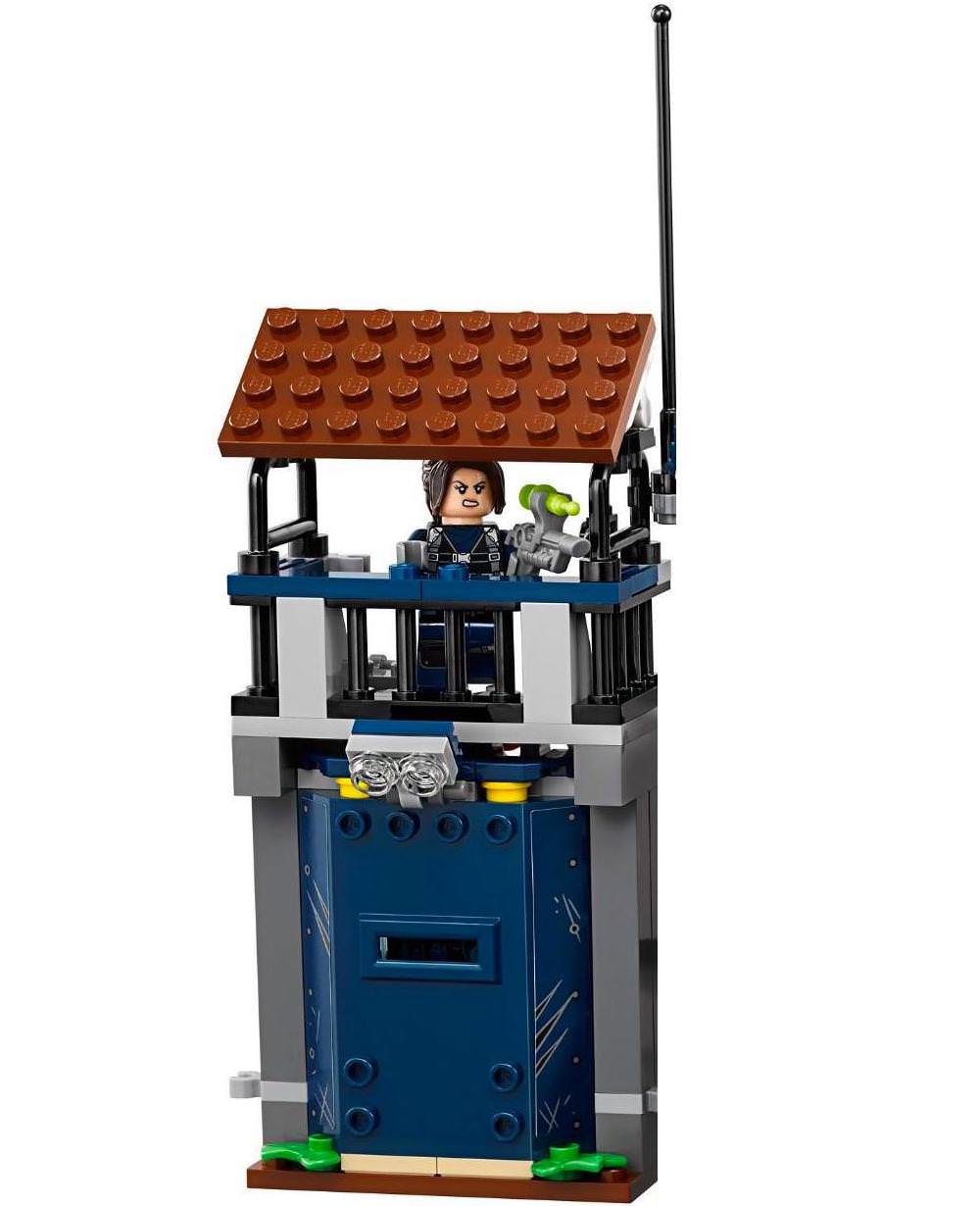 First up is the tower. It’s grey, dark blue, and black in color, with some brown highlights. A couple of the new-ish plant pieces are utilized at the base, and the wall panel below is from Nexo Knights (with two stickers applied to it). Above that all is a balcony where a minifigure can stand. I really like the sloped roof technique. 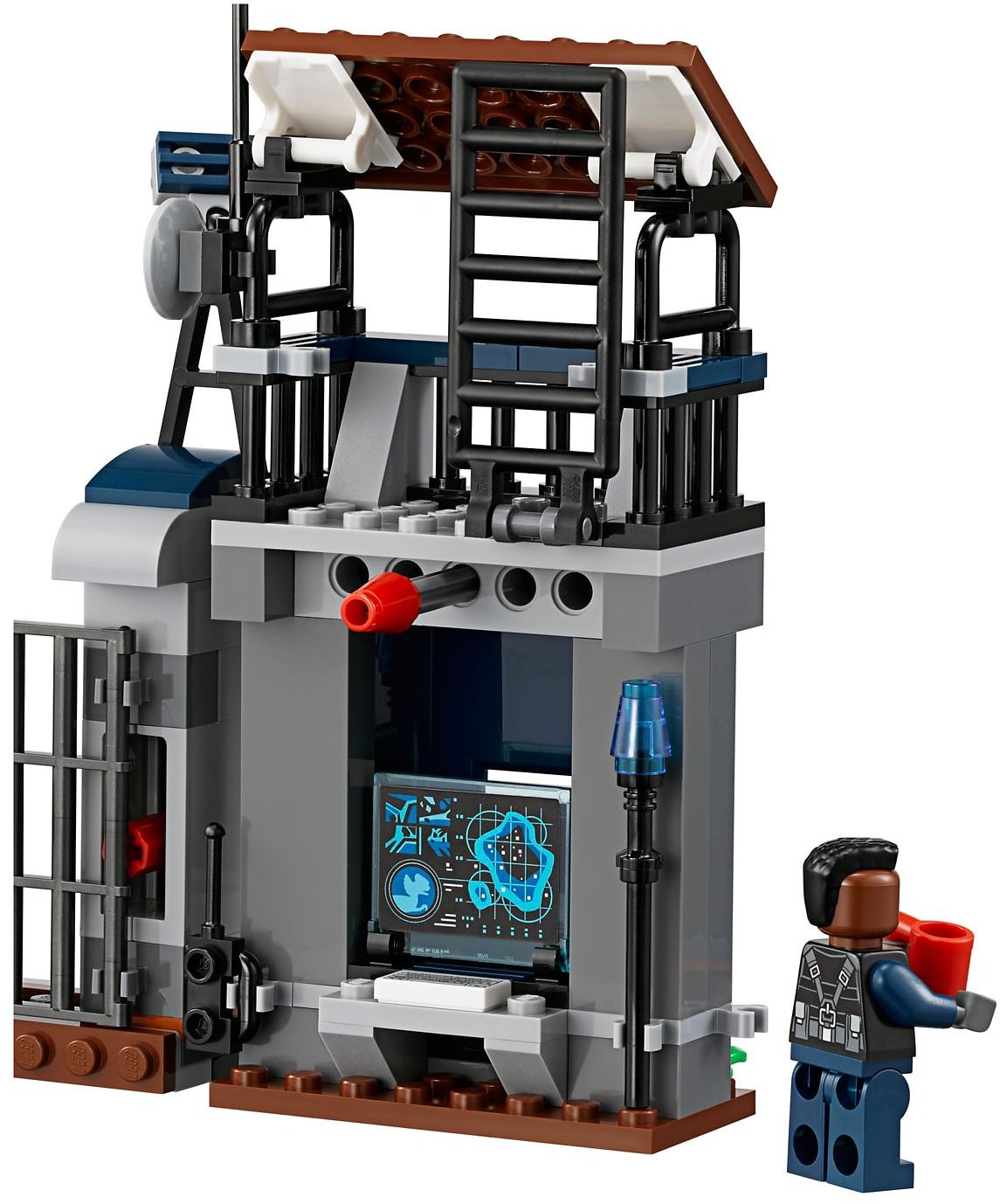 Now we swivel around to the back of the tower. The lower level has a computer screen that is a sticker. Interestingly, this uses a technique that I have not seen before – attaching a 4-wide window panel piece to clips. It’s not allowed in LEGO Digital Designer though :-\ There’s also a couple of clips to attach the guards’ walkie-talkie and shock prod.

A ladder comes down from above but can be folded up. This gives access to the balcony above. From here, you can see how the sloped roof is built – attached using the riot control shields that first appeared in 75166! It’s pretty neat, though I wish they weren’t white. 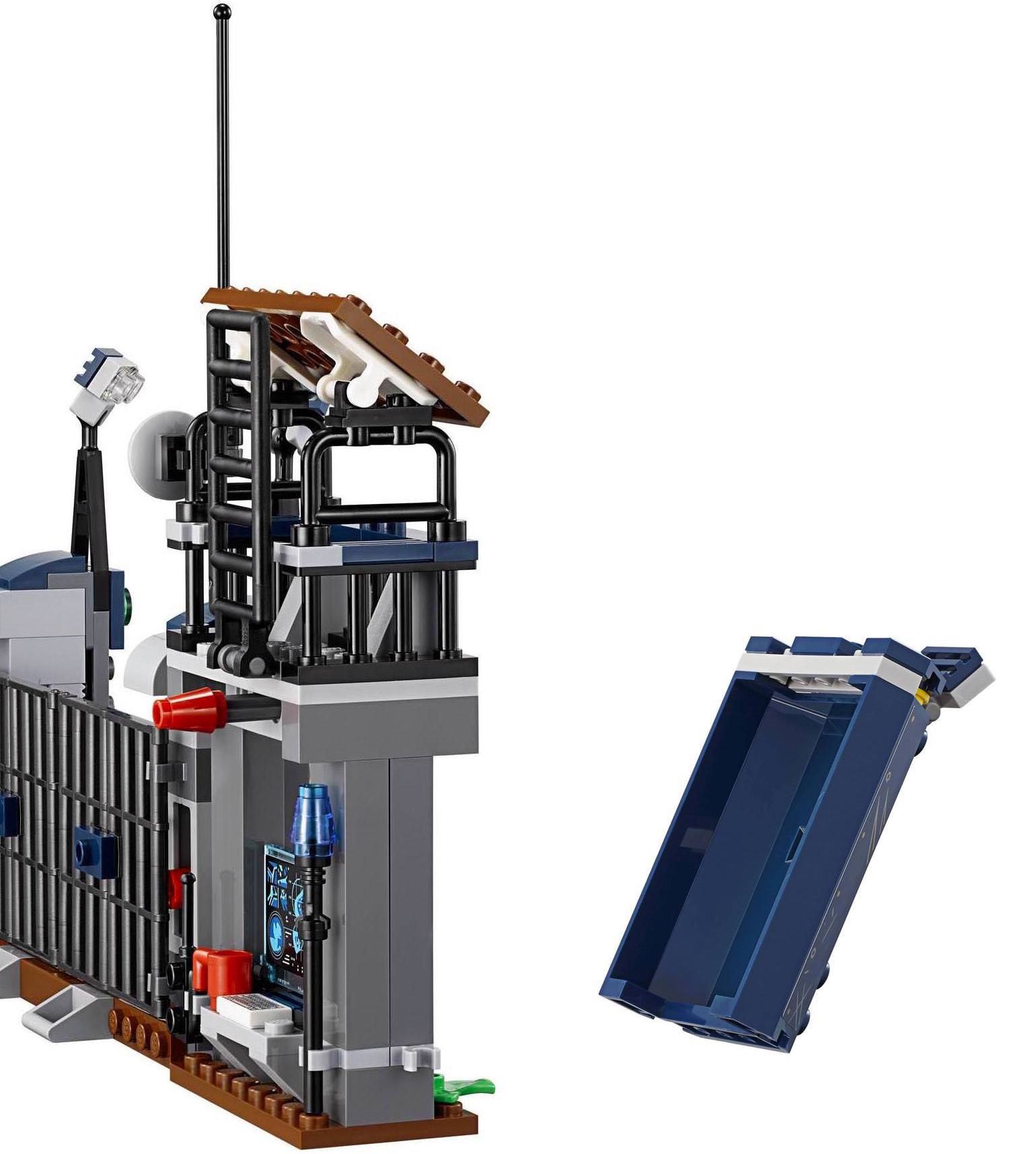 Also, you probably noticed the red cone in between the floors. Push it, and the wall panel piece flies out as if it’s destroyed. Another wall-exploding feature I guess. Not sure how the Dilophosaurus can knock the wall towards the outside though – maybe it yanks it out with its mouth? 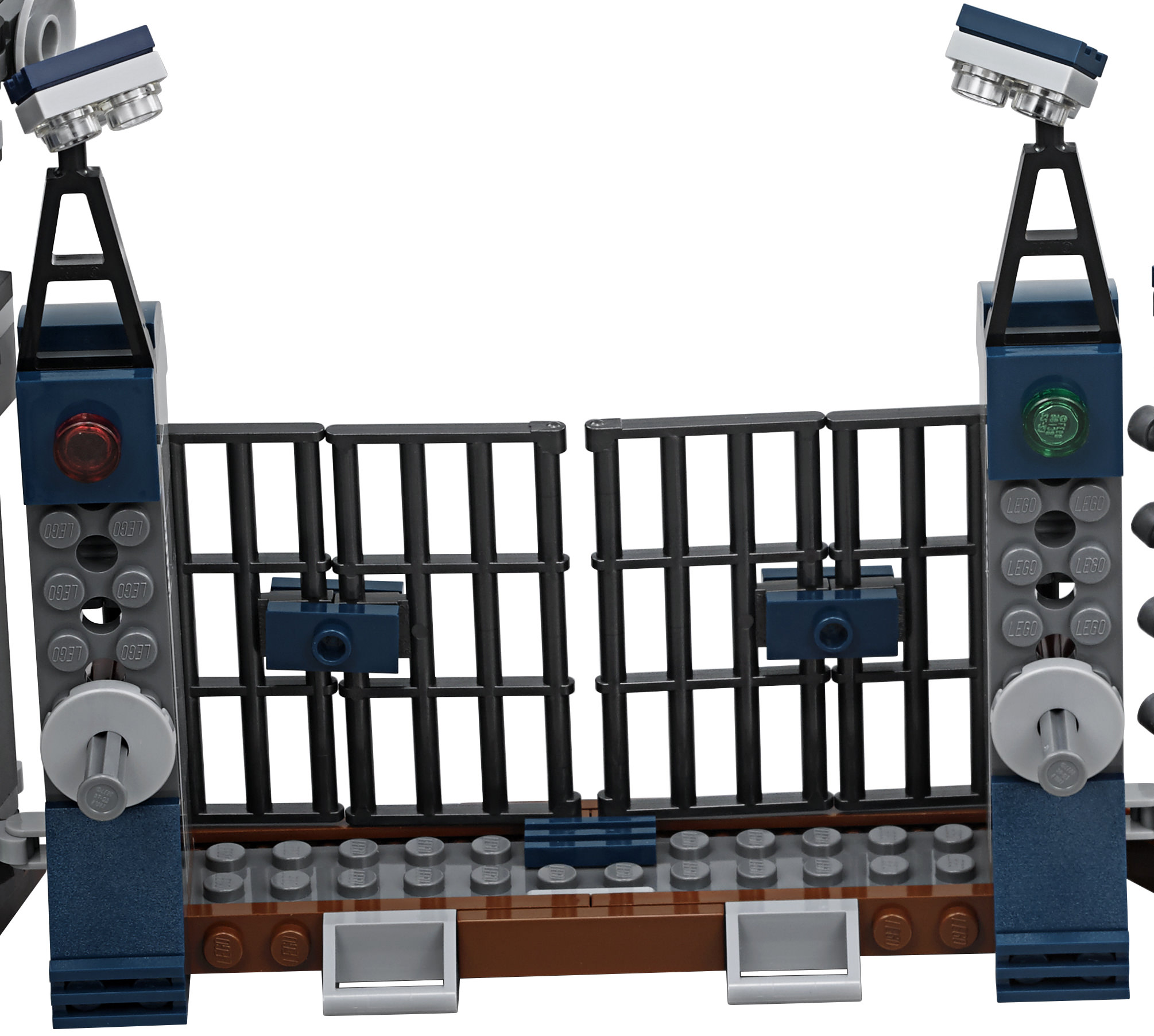 The center section is the gate. It has a dark blue and grey color scheme with a couple of brown notes at the base. There are a couple of spotlights mounted at the top on ball joints, and there are a couple of lights on the flanking columns. The gates themselves are made out of two jail door pieces combined via jumper plates – it looks good but it’s a slightly flimsy connection. The gates can be pushed inwards to open them. 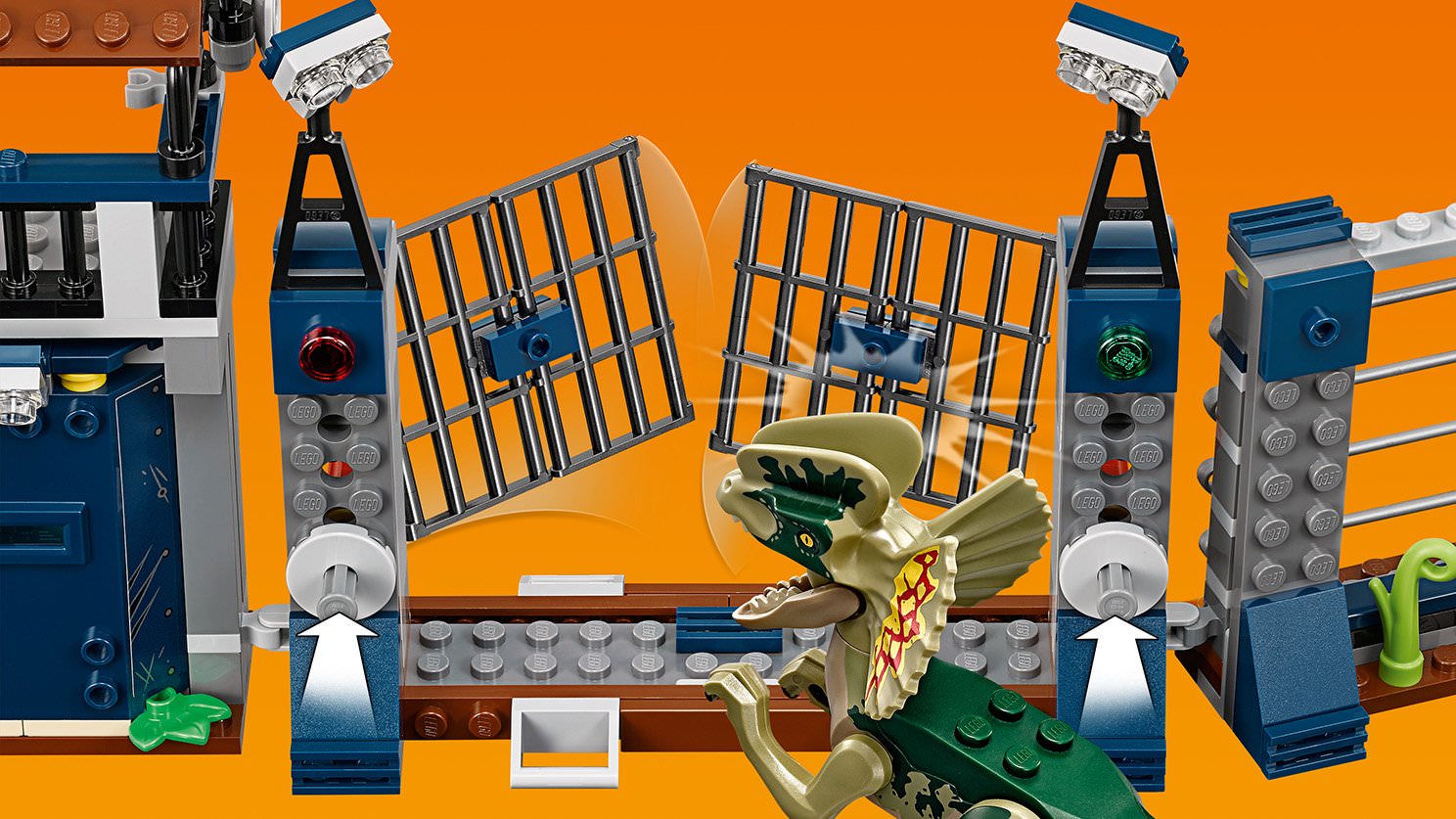 However, there are a couple of grey Technic pins on each column. Push them in, and the gates get smashed inwards. This takes quite a bit of force, though, as you have to break multiple clip connections. 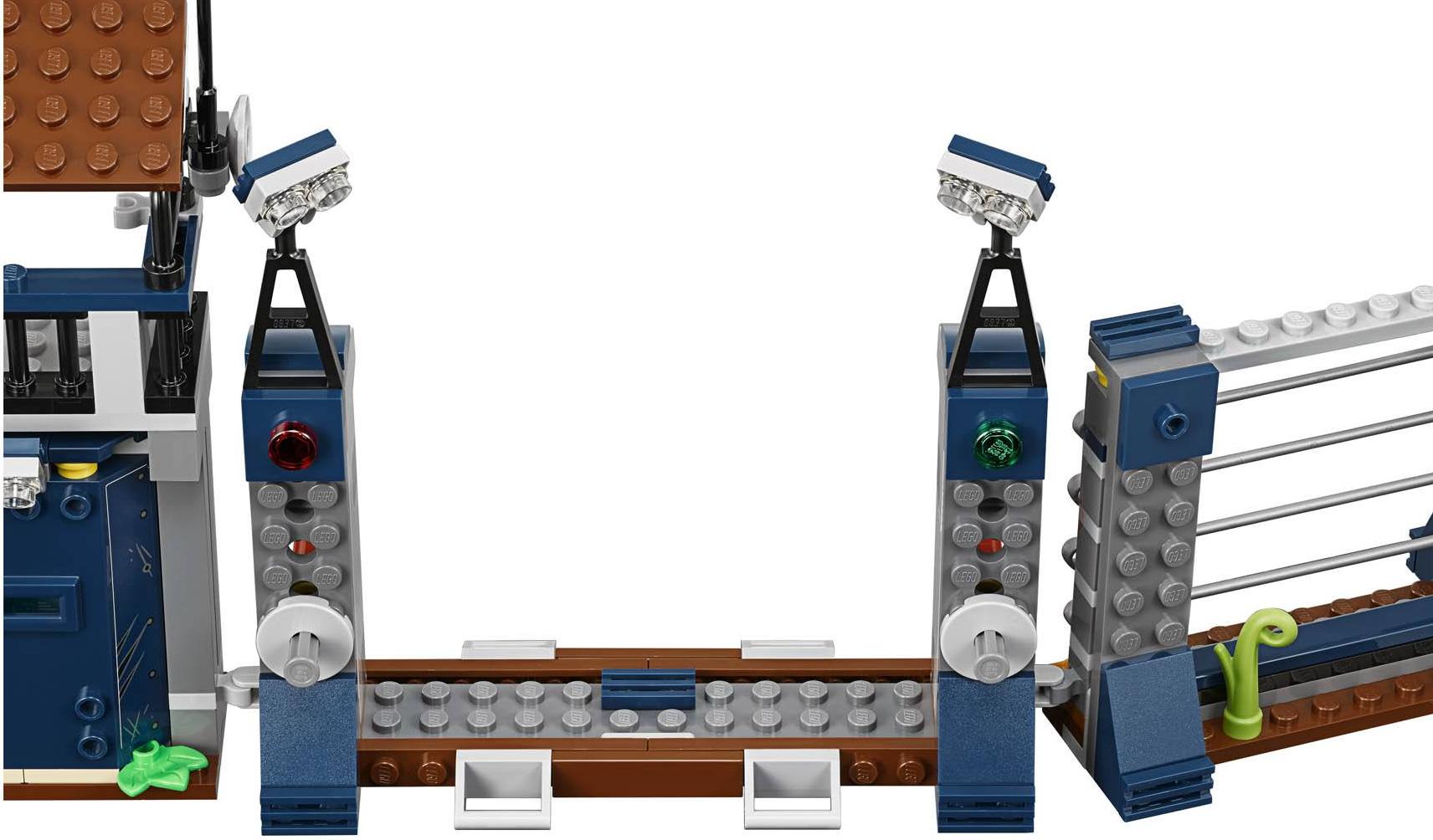 After that, you have more than enough space for the Dilophosaurus to charge through and wreak havoc. 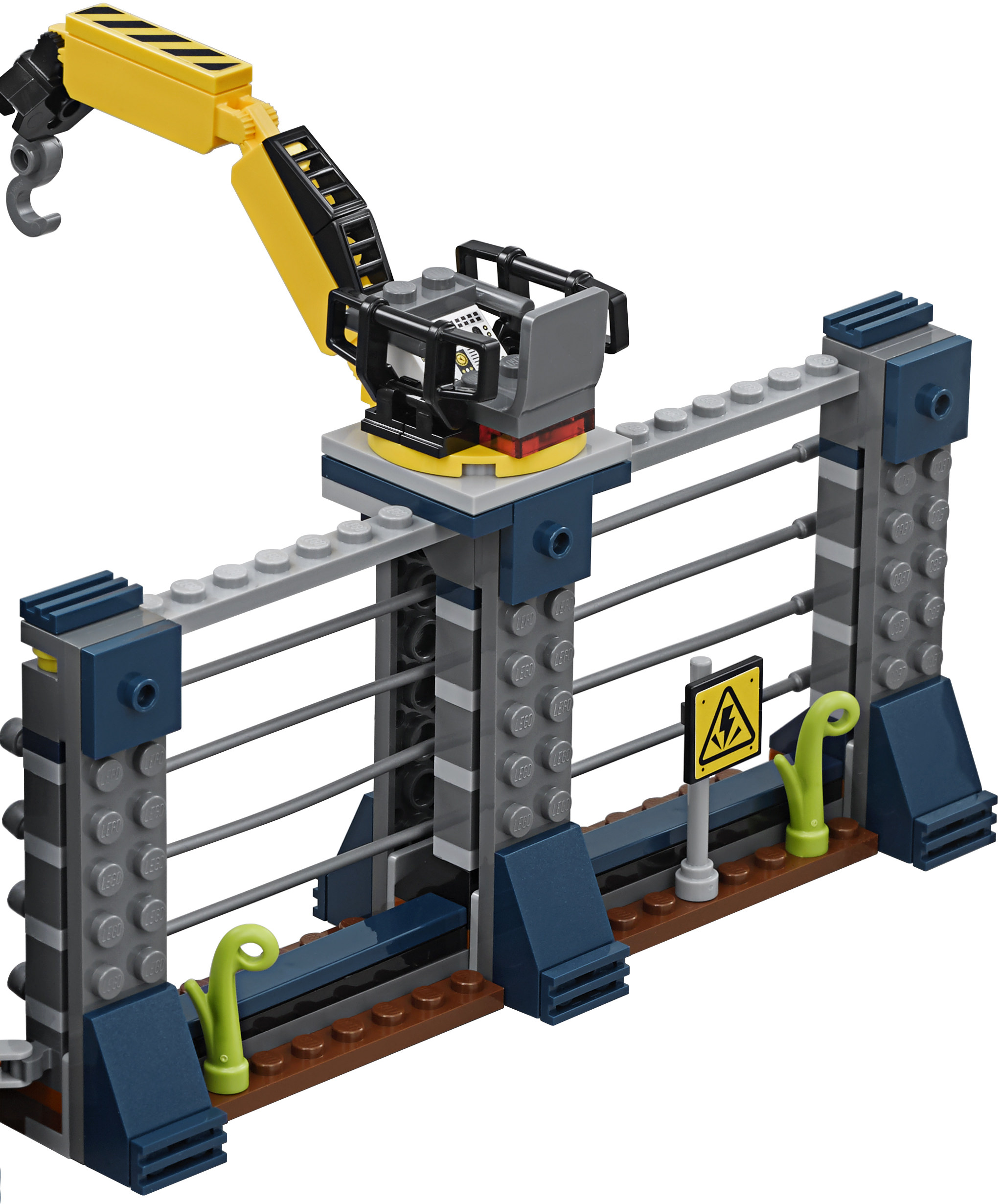 The third and final section is the electric fence section. It’s the widest section but pretty shallow too. The electric fence portion is made from four relatively new pieces in silver. These are all parallel to each other and it looks good – I hope LEGO applies this method of electric fencing to other sets. There’s a stickered sign at the base which indicates the fence is electric. At the top of the wall is a crane. 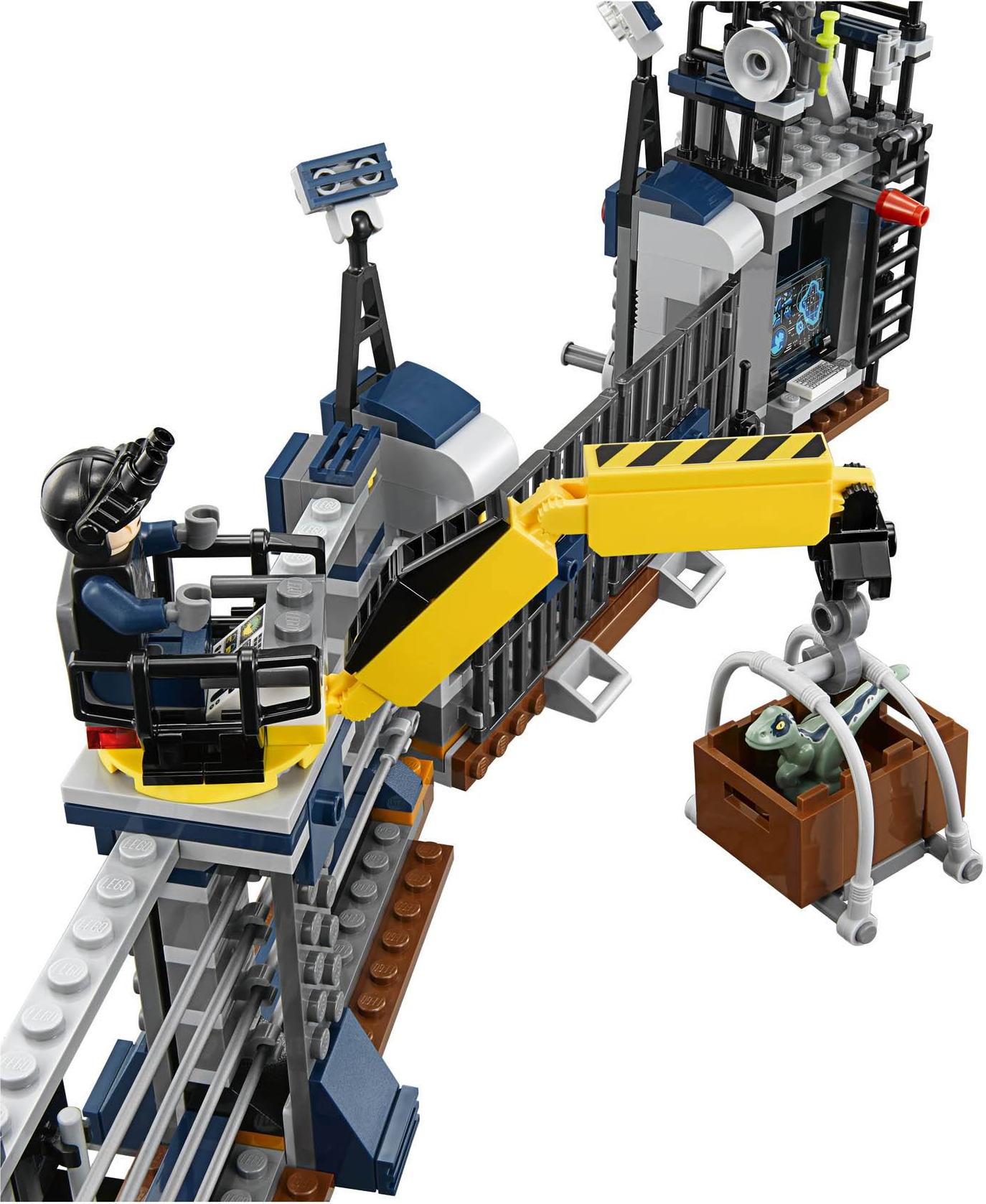 The crane is on a 4×4 turntable so can spin 360º. There’s a seat for one minifigure with a printed 2×2 control slope. The relatively new black bumper pieces are used on either side to form armrests, which is a neat part reuse. The crane has multiple joints and can be used to lift up the included crate. 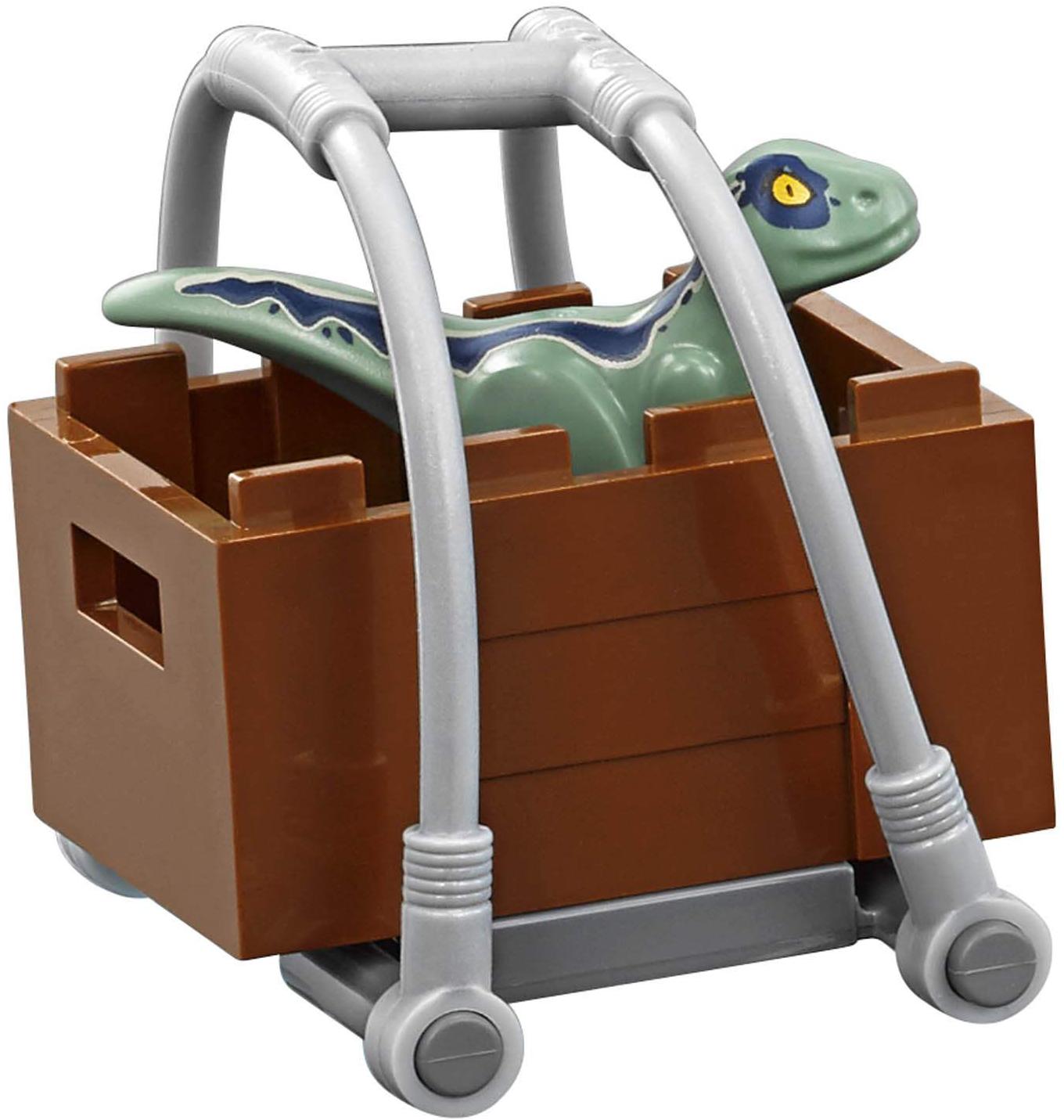 The crate itself has not much to it, except for a flexible grey piece curved over the top so the crane can lift it. You can put the baby Velociraptor inside. 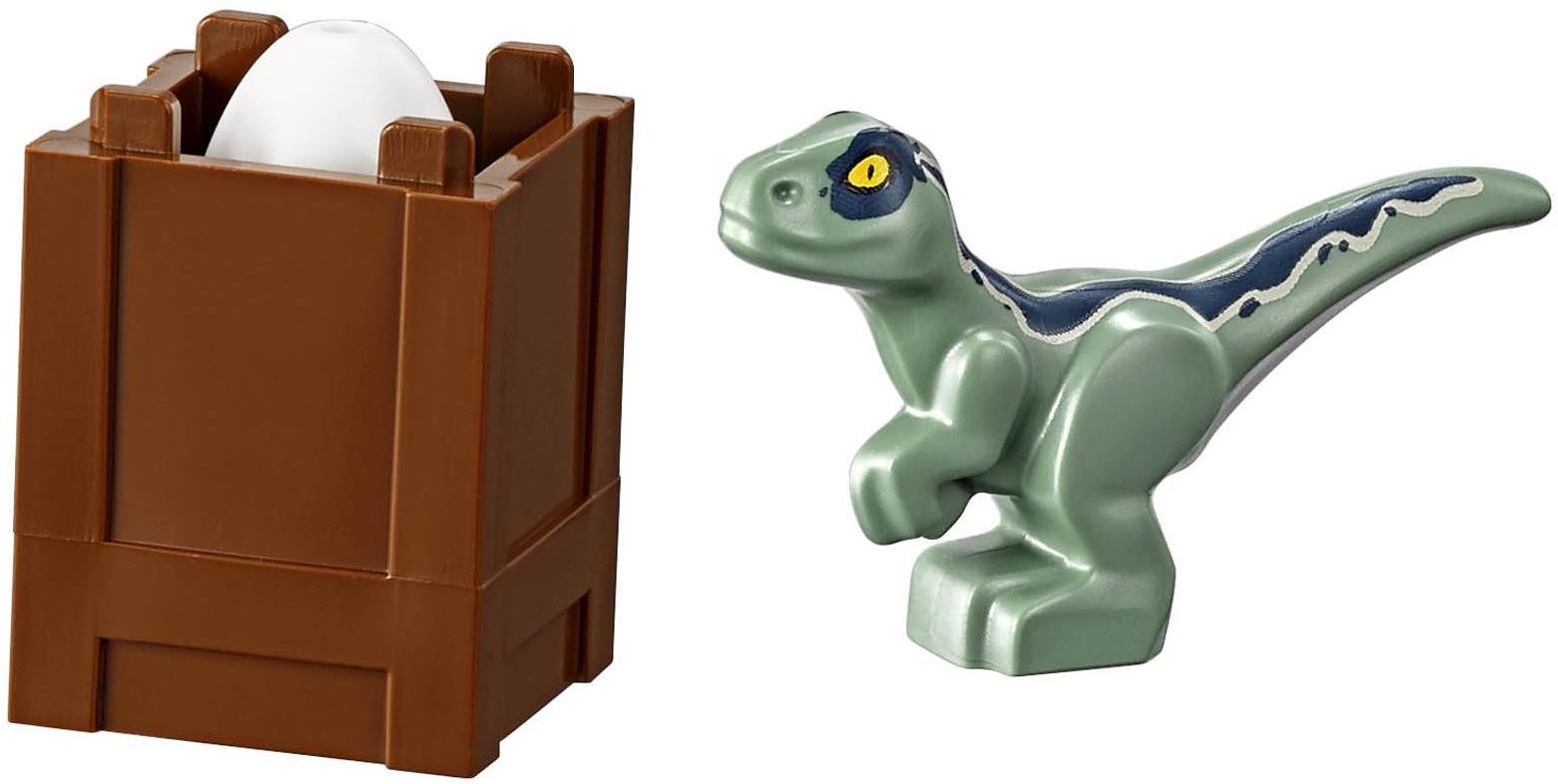 There’s also another crate included that has an egg inside, but this one is smaller and cannot be lifted by the crane (at least not without modifications).

So, that’s it for the set. On the whole, I think this set is the ugly duckling of the Jurassic World: Fallen Kingdom line. The build looks nice but is relatively unremarkable in the grand scheme of things, and the minifigure selection could definitely be much better. Playability is okay I guess, but the price is not justified at all. The maximum this should have been would be £29.99 (UK), $29.99 (U.S.), $49.99 (Aus), and $59.99 (NZ) – the current price is much too high. Thus, I wouldn’t really recommend this set, though if there’s something about it you really like, then definitely at least wait for a discount.

Thanks for reading! Leave your thoughts in the comments below 🙂 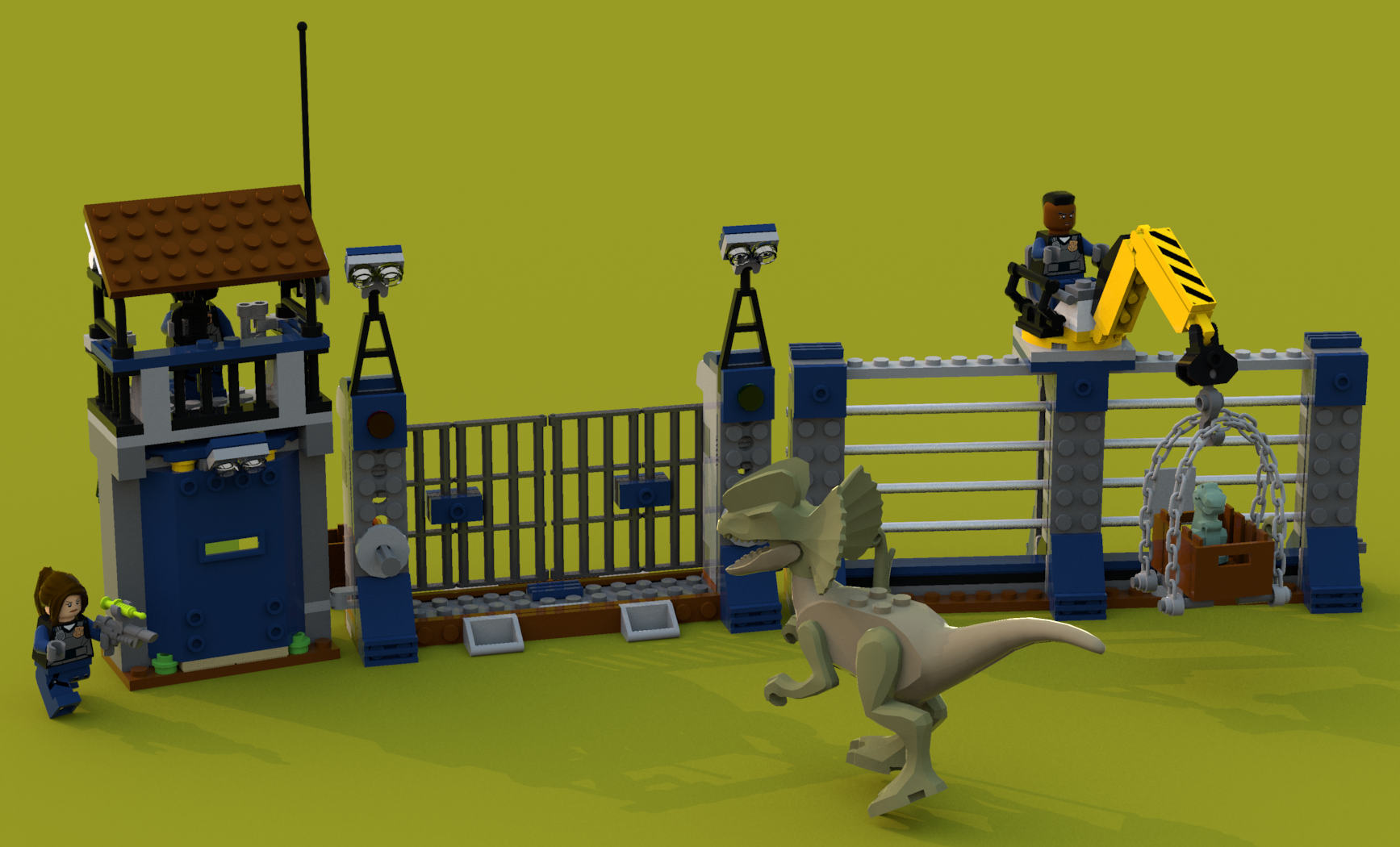