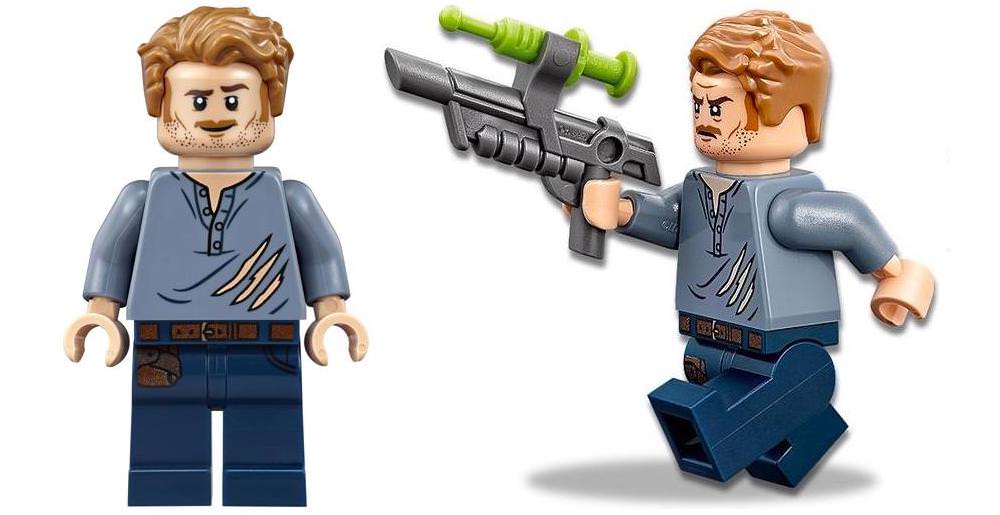 There are three minifigures in the set, and the first one is an exclusive Owen Grady. He has the normal 2018 Owen head, hair, and legs, but his shirt is sand blue with some dinosaur scratches. I’m guessing this is basically his regular outfit but minus the jacket, since the normal outfit has a sand blue shirt under the brown jacket. Owen has a tranquilizer gun. 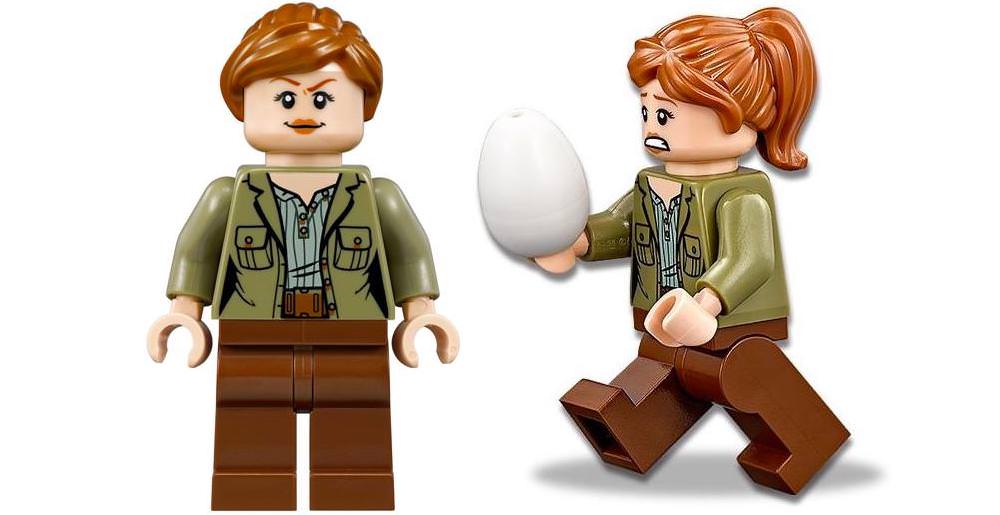 The second minifigure is Claire Dearing. I think this minifigure is vastly superior to the 2015 variant. She has a dark orange ponytail hairpiece and a double-sided head (smirking and sad) – the smirking expression looks a bit evil to me! She wears an olive green jacket and is shown here carrying one of the dino eggs. She is not exclusive, as she also appears in 10758 T-Rex Breakout and 75930 Indoraptor Damage at Lockwood Estate, but she’s one of the rarer main characters as all three sets are relatively large. 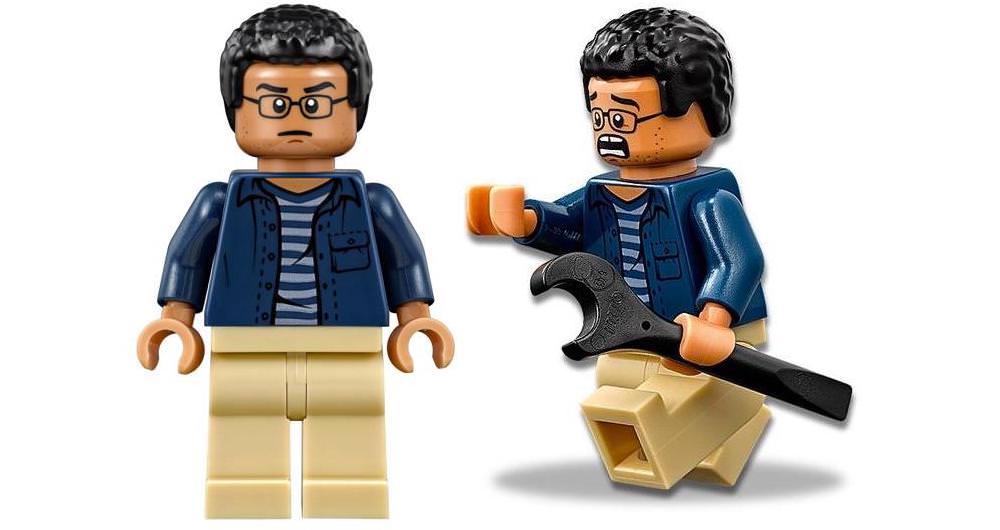 Last but not least is the exclusive Franklin Webb minifigure included. Franklin, like Zia from 75933 T-Rex Transport, is a member of the Dinosaur Protection Agency. He has Finn’s hairpiece which is a decent representation and has a double-sided glasses head piece which I think is quite accurate. He wears a dark blue jacket over a striped shirt underneath, and has a spanner.

There’s a small baby dino included in the set. It also appears in two other sets – the same one Claire appears in. It has a dark orange color scheme and is a one-piece mold. I believe it was created to represent a baby T-Rex but I suppose you can pretend it’s a baby Carnotaurus if you like given the context of the set. 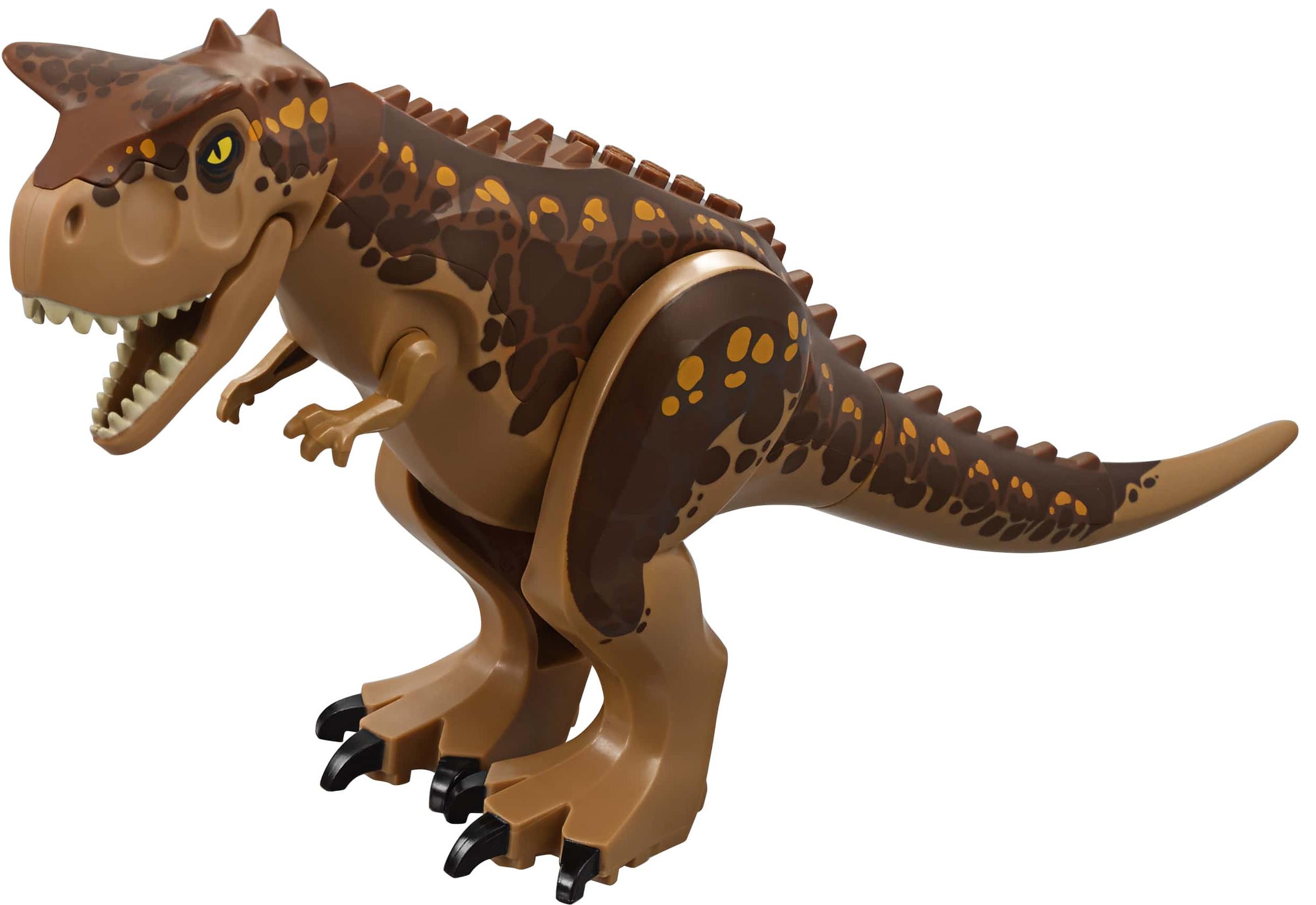 Finally, the set includes a large Carnotaurus dinosaur – actually too large, in fact. The body and the tail were created for the Indominus Rex (75919), the legs are those of a LEGO T-Rex’s (75933), and the arms are those of a Stigymoloch (75927). This makes it pretty oversized but I think it is fine for play and it looks nice with the brown and nougat coloring. 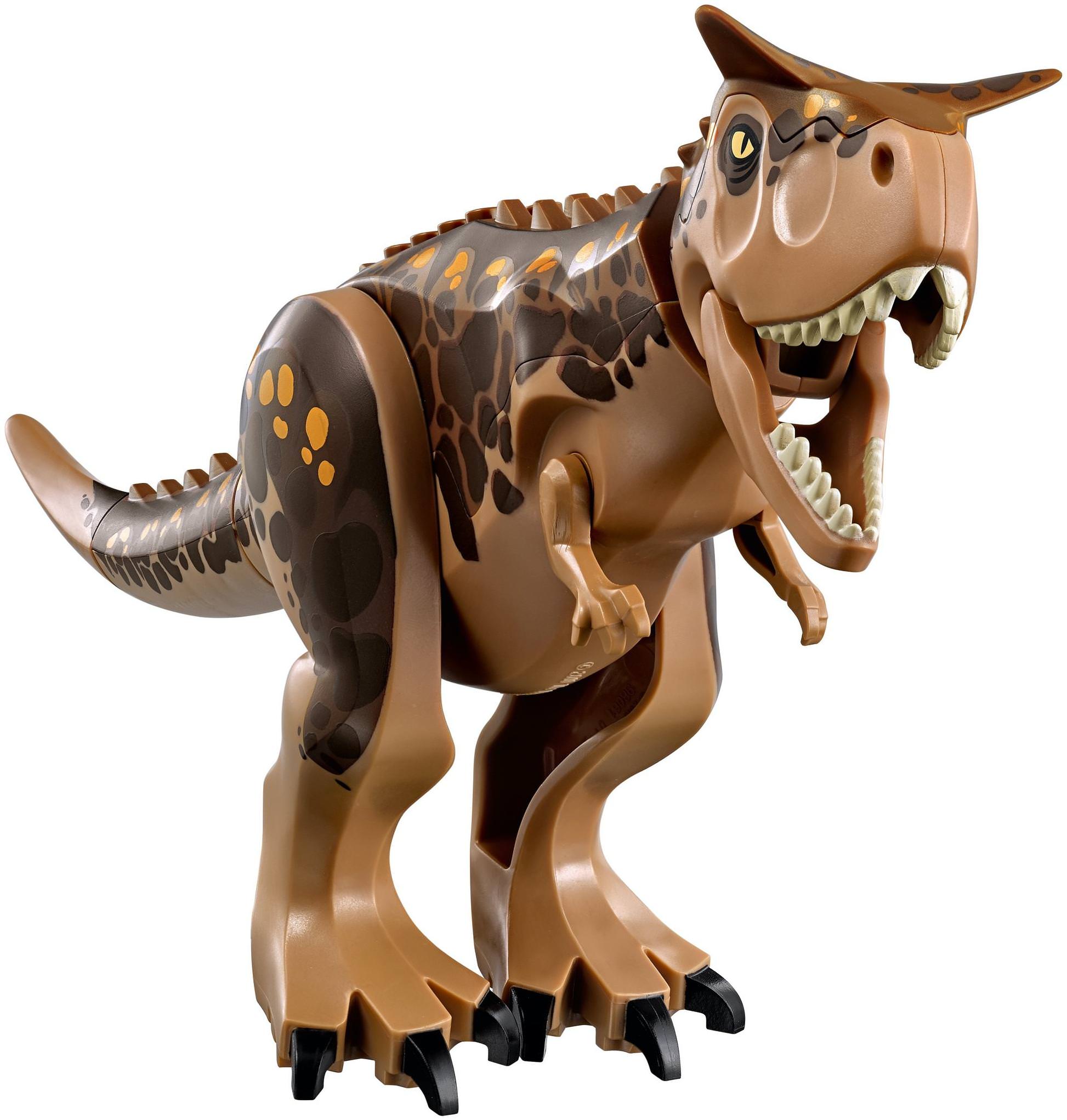 The head is new and has two protrusions sticking out on either side above each eye. The mouth can be opened and closed but is too small to fit a figure inside. 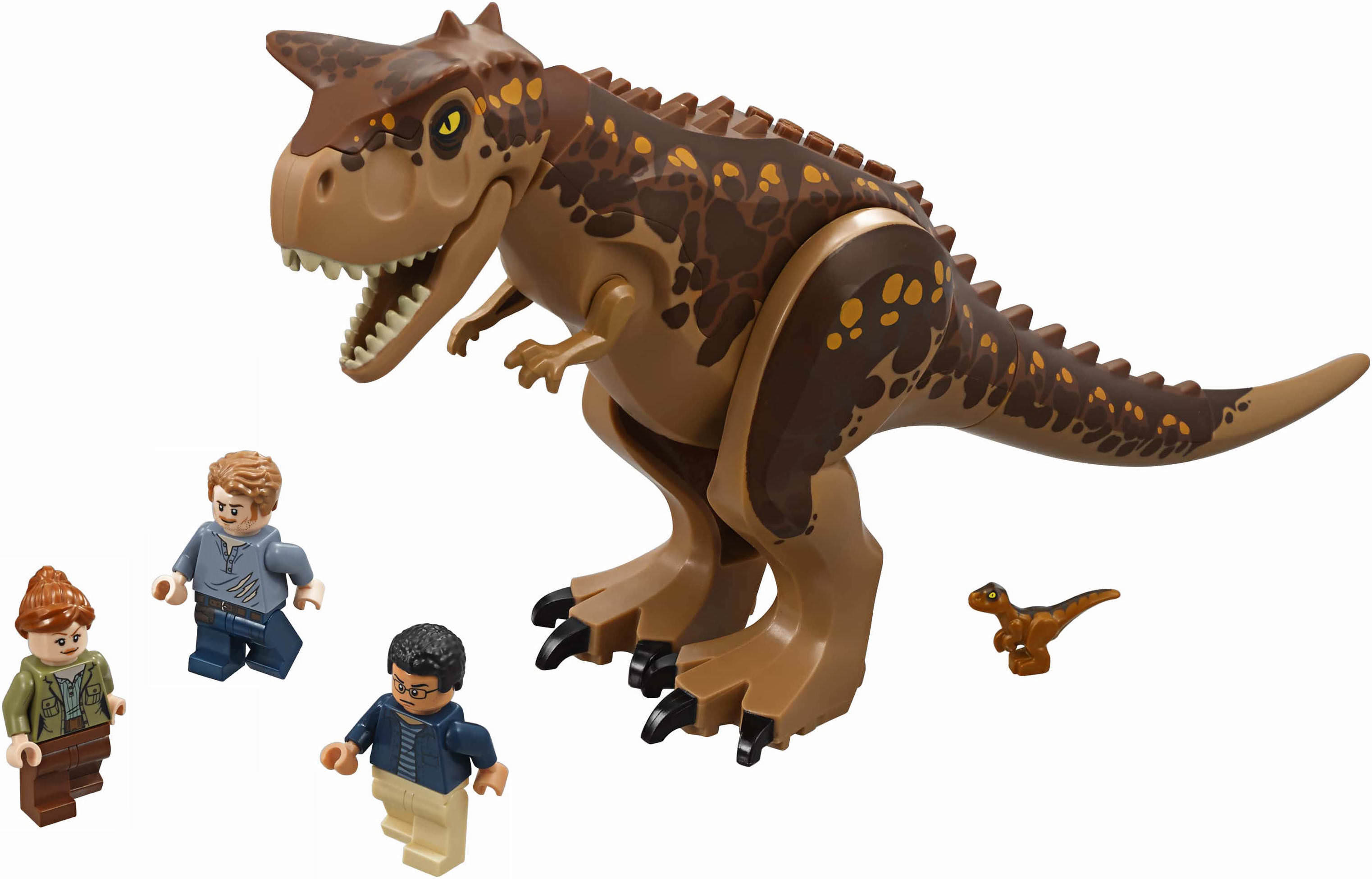 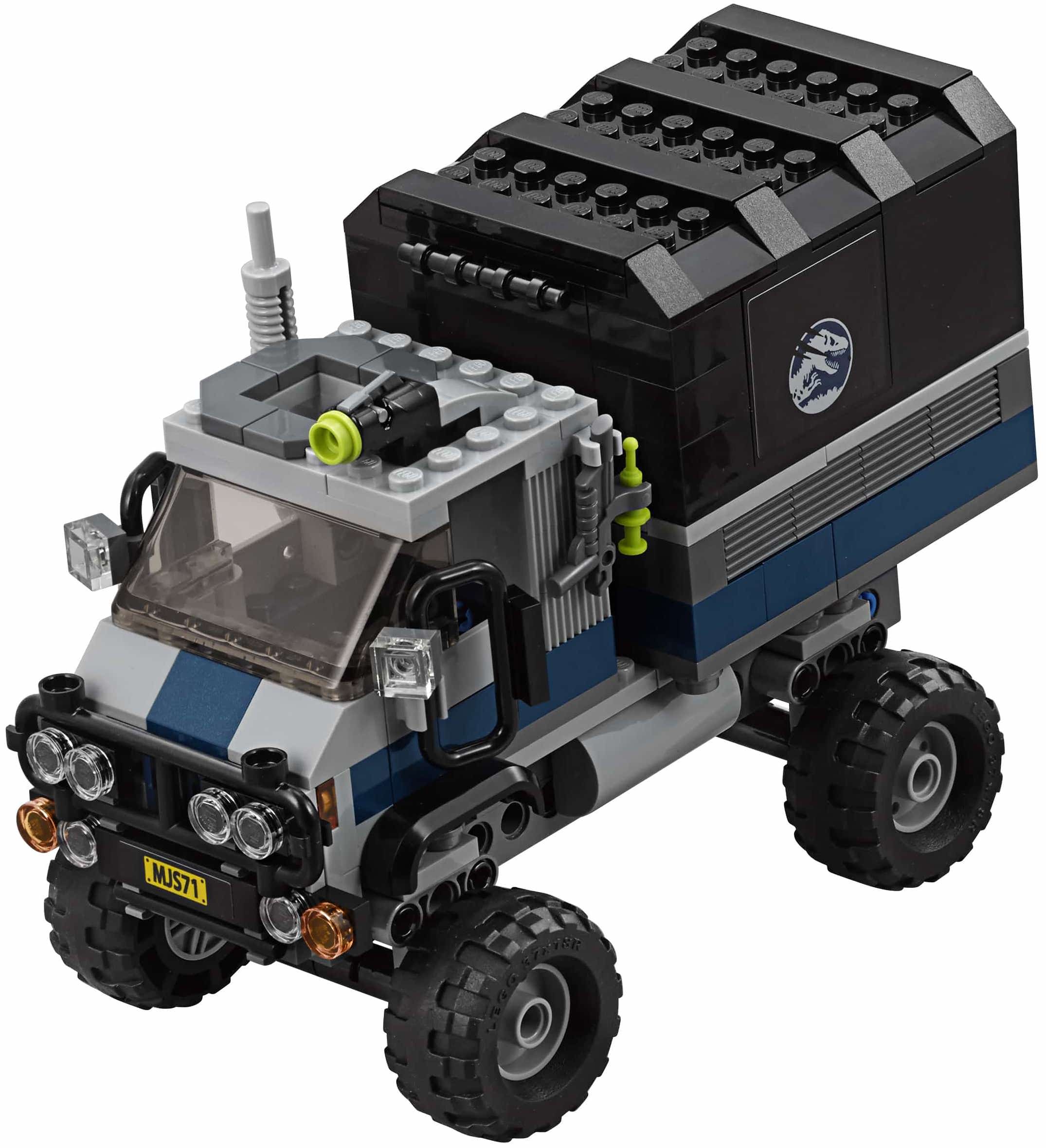 Now we move on to the builds in the set. The first one is a big off-roader, very reminiscent of the one included in 75917 Raptor Rampage (fittingly a 2015 set with Owen and Claire). Unfortunately, I think it has the same problem as the previous truck as I feel the truck body sits far too high in relation to the wheels and the truck looks rather ugly as a result. It has a grey, black, and dark blue color scheme which I think looks good, and looks pretty beefy with the big bars on the front. It’s just the body sits way too high up. 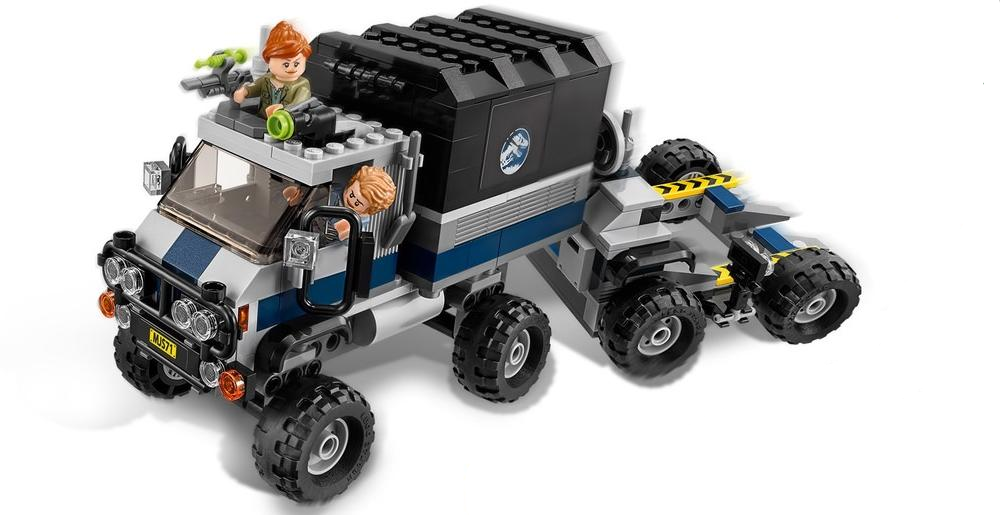 The driving compartment only has a seat for one inside, however, there is an open hatch at the top with a 2×2-sized hole that another minifigure can stick out of. There’s a stud shooter on the side of the hatch that fires off lime green studs, though disappointingly it cannot swivel. While there is no cover for the hatch, I like this feature as it allows two minifigures to be side-by-side in the driving compartment. 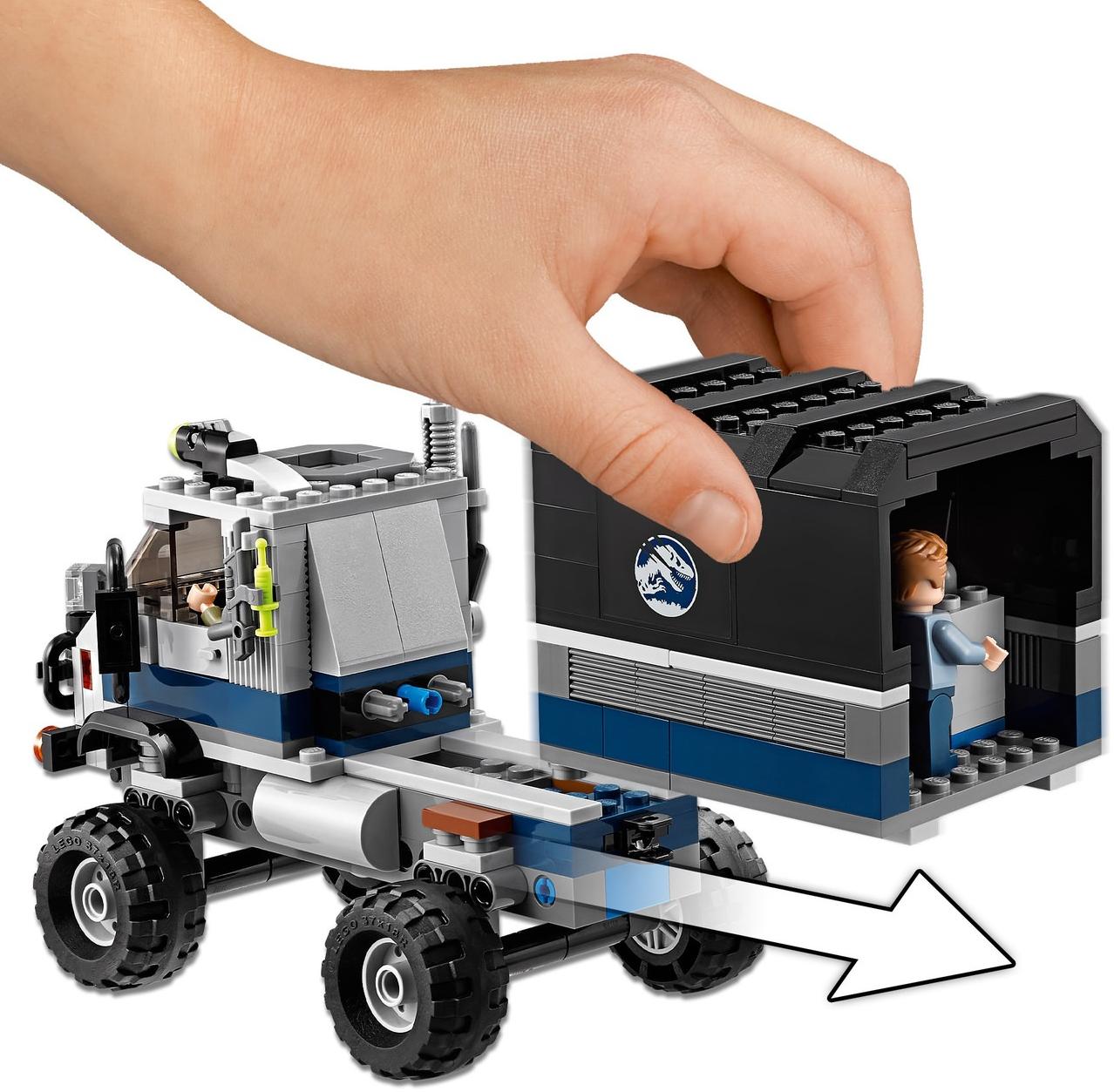 The back of the truck has a ‘mobile lab’ which can be slid off from the back and is connected by Technic pins. It has a nice black, grey, and dark blue color scheme with some Jurassic World stickers and a nicely shaped roof. 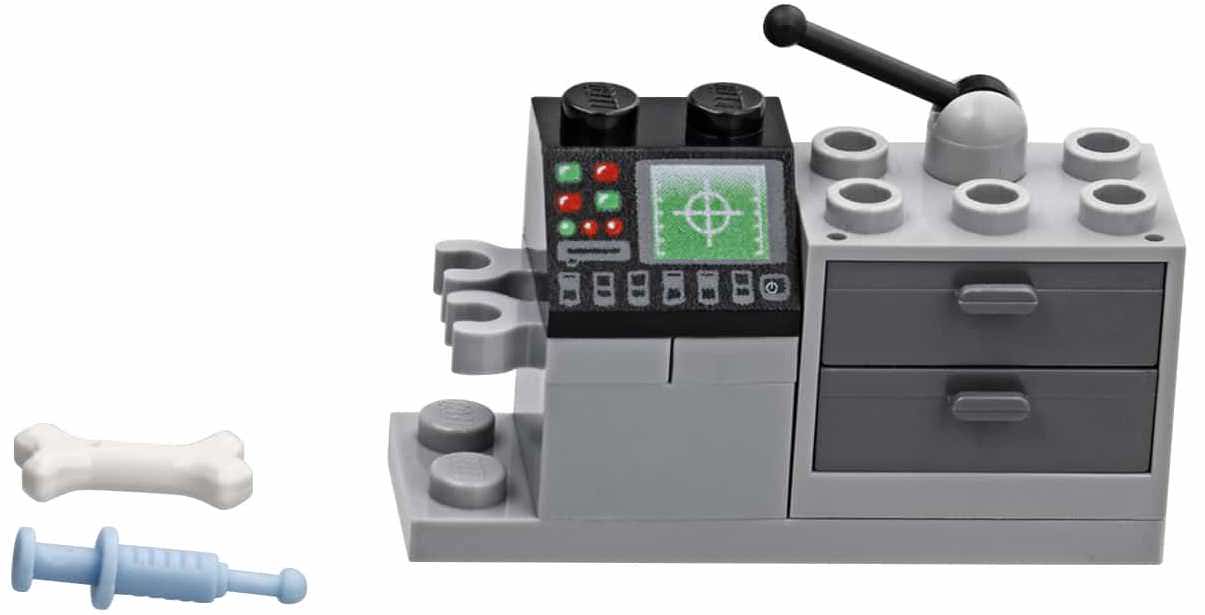 Inside there’s a printed 2×2 black slope with some controls, as well as two clips, a chest of drawers, and a joystick on top. Inside the drawers are a bone and a syringe. 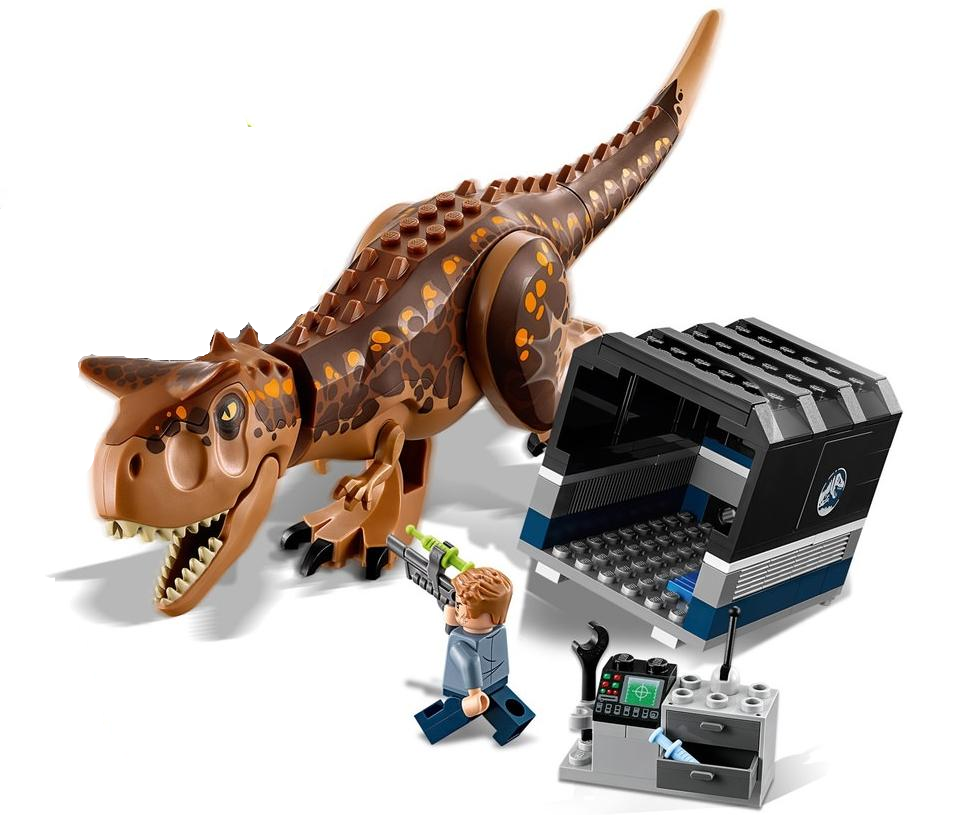 I was very disappointed to find there was nothing else inside the ‘mobile lab’. There’s a decent amount of space to put figures but I would have liked more details. It feels very lame in this present mode. 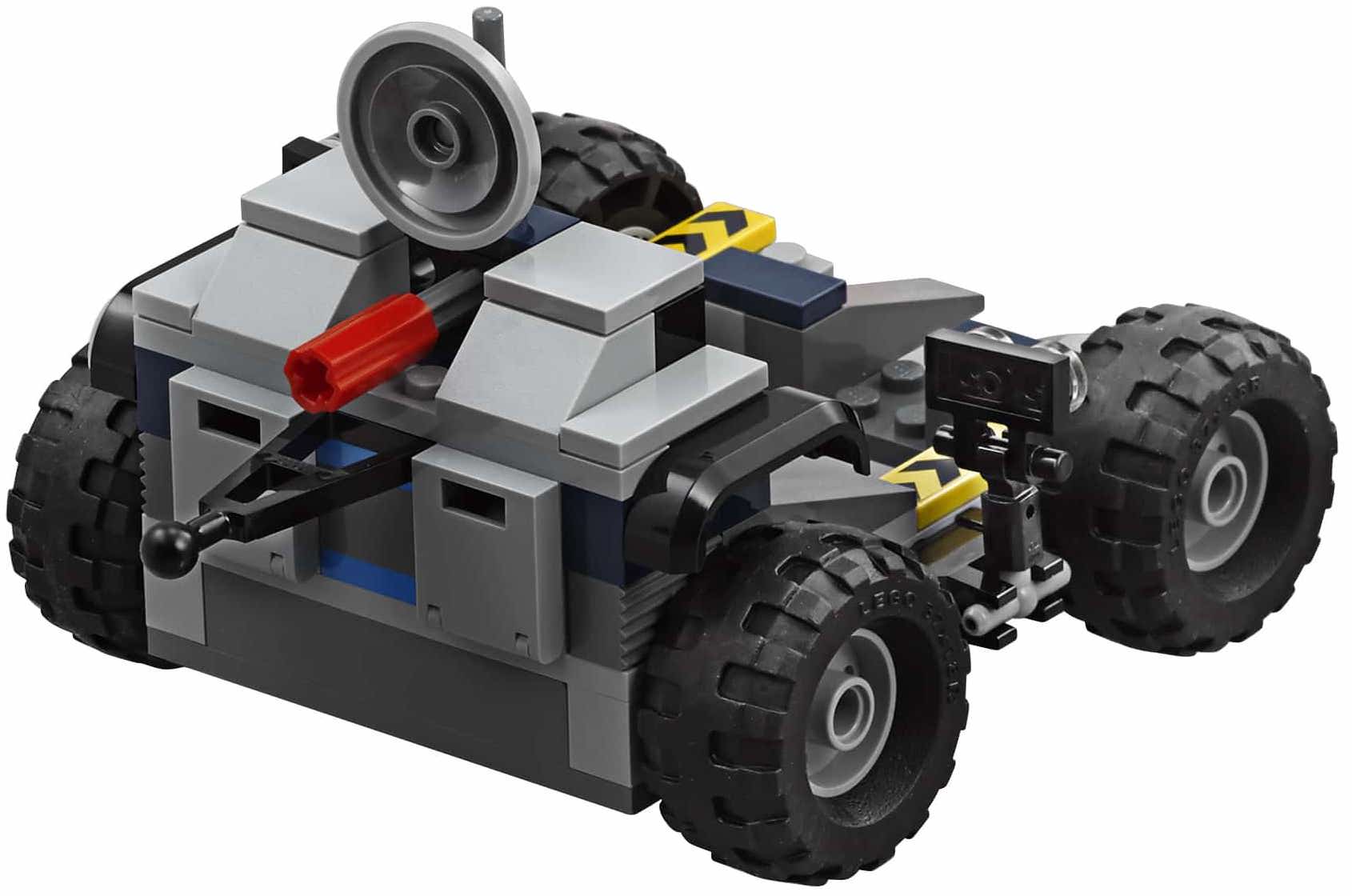 There’s a build that can be pulled along by the main truck. It is the mobile gyrosphere launcher. It has a towball at the front to connect to the truck and a couple of opening compartments, which have a bone and an egg inside. There’s a satellite dish on top and a red Technic axle connector which you probably already have noticed. 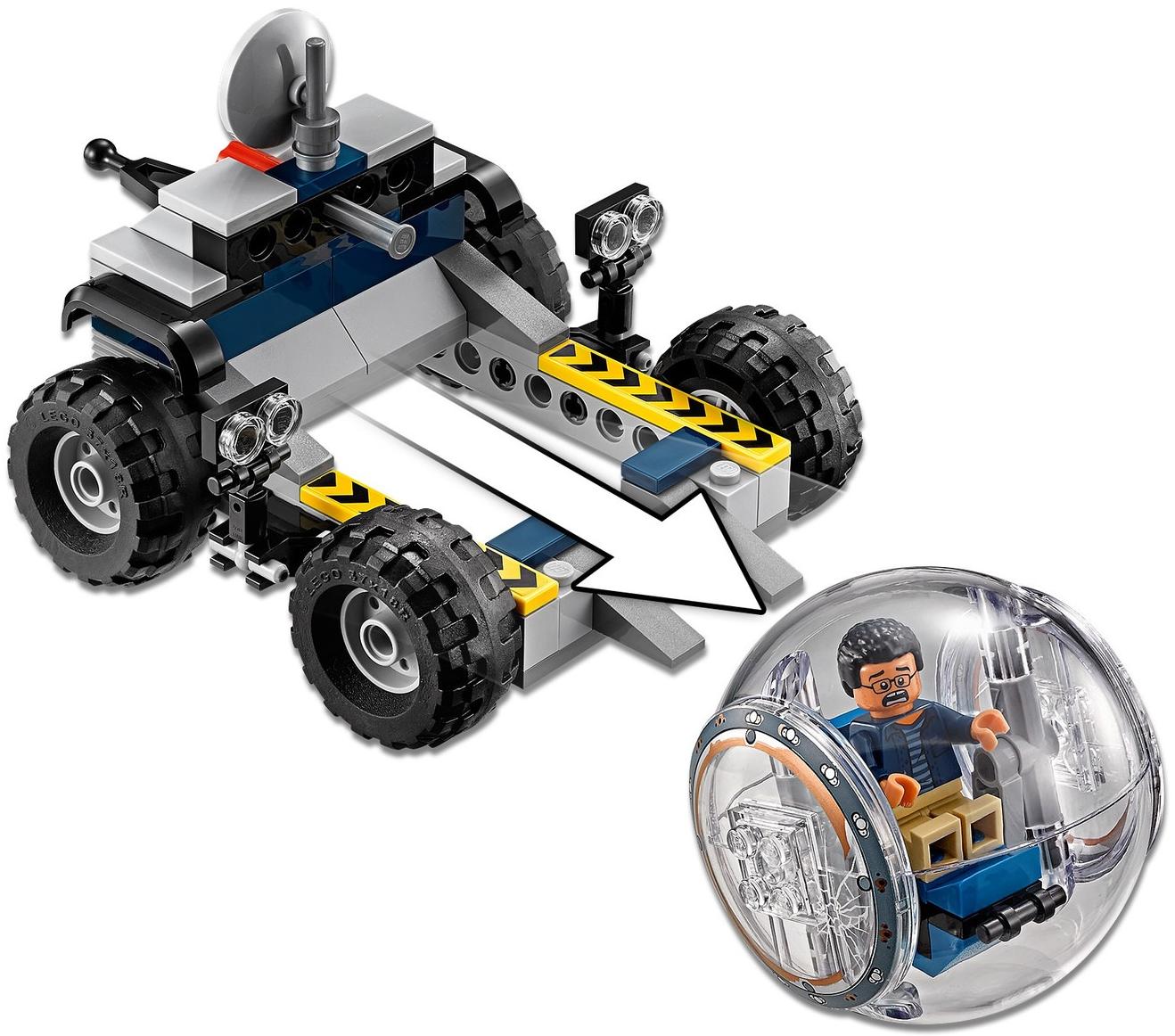 Well, you can place the gyrosphere at the back to transport it along. However, you can push the red axle connector in and it launches the gyrosphere, sending it rolling off! 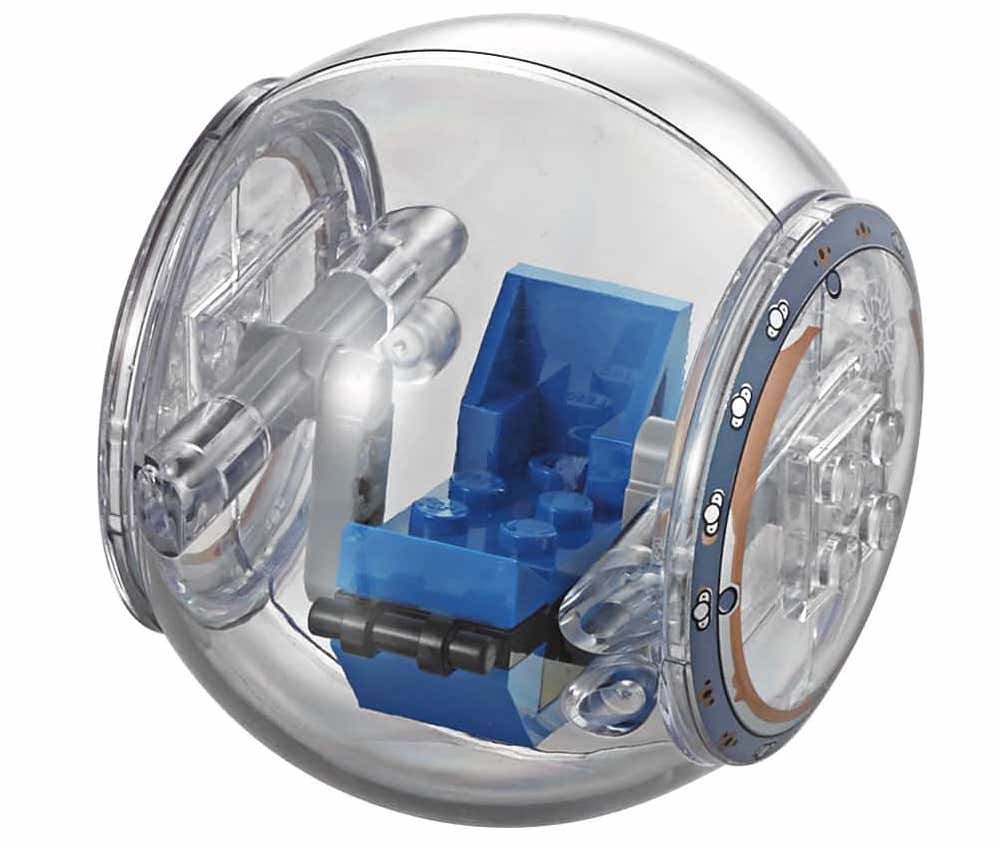 The gyrosphere is made from two large clear halves, and looks pretty nice if you ask me. The 6×6 clear radar dish pieces on either sides are different from the 2015 versions, as they have printed cracks and rust. 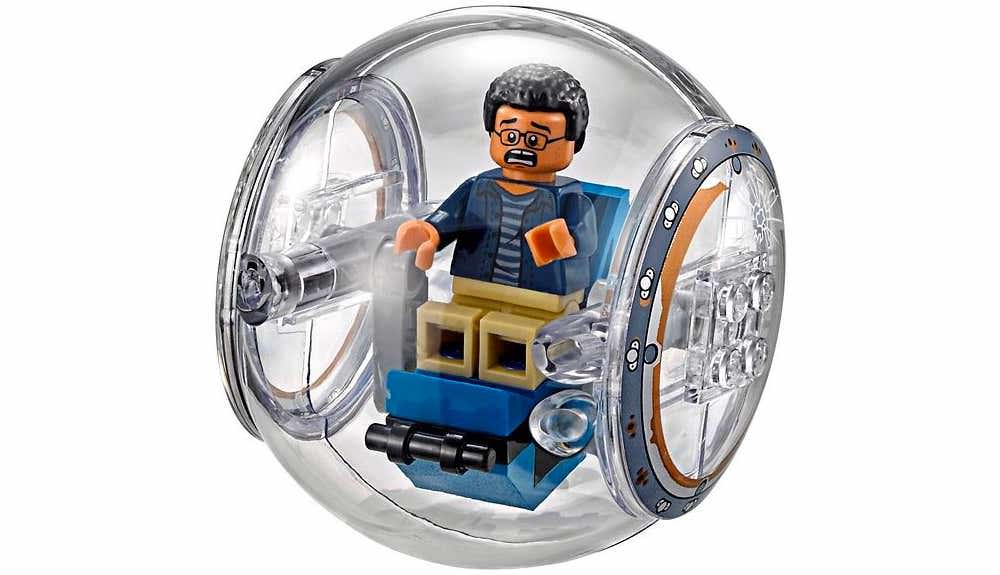 Here’s the same photo you saw earlier, but take note of the truck pulling along the mobile gyrosphere launcher. 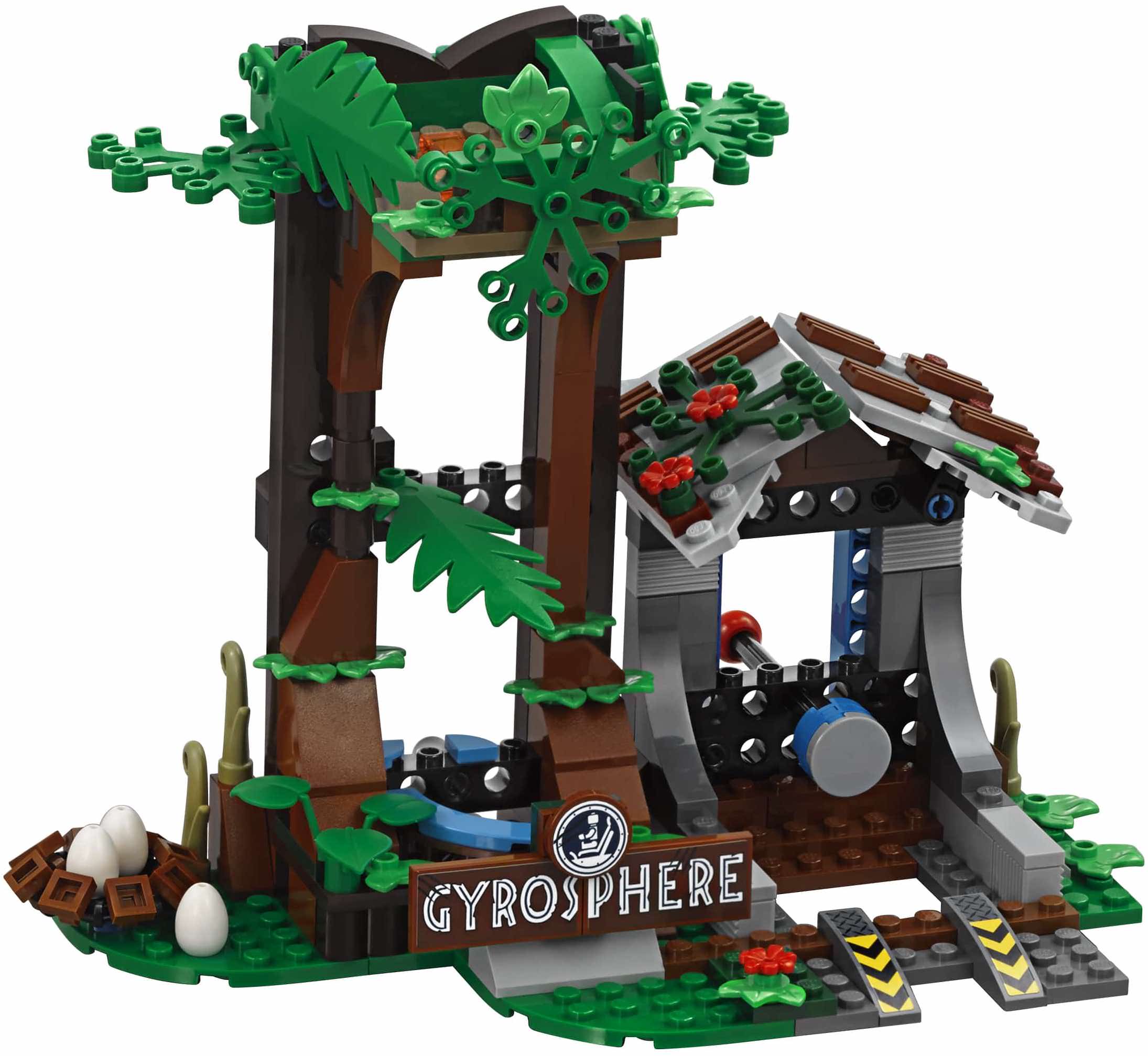 The final build in the set is an overgrown gyrosphere launcher. It has the main launcher itself next to a tree, with lots of leaf pieces sprinkled everywhere to give it a messy, overgrown look. Three stickers are used to create a Gyrosphere sign – the round 2×2 tile shows a minifigure sitting inside the gyrosphere! 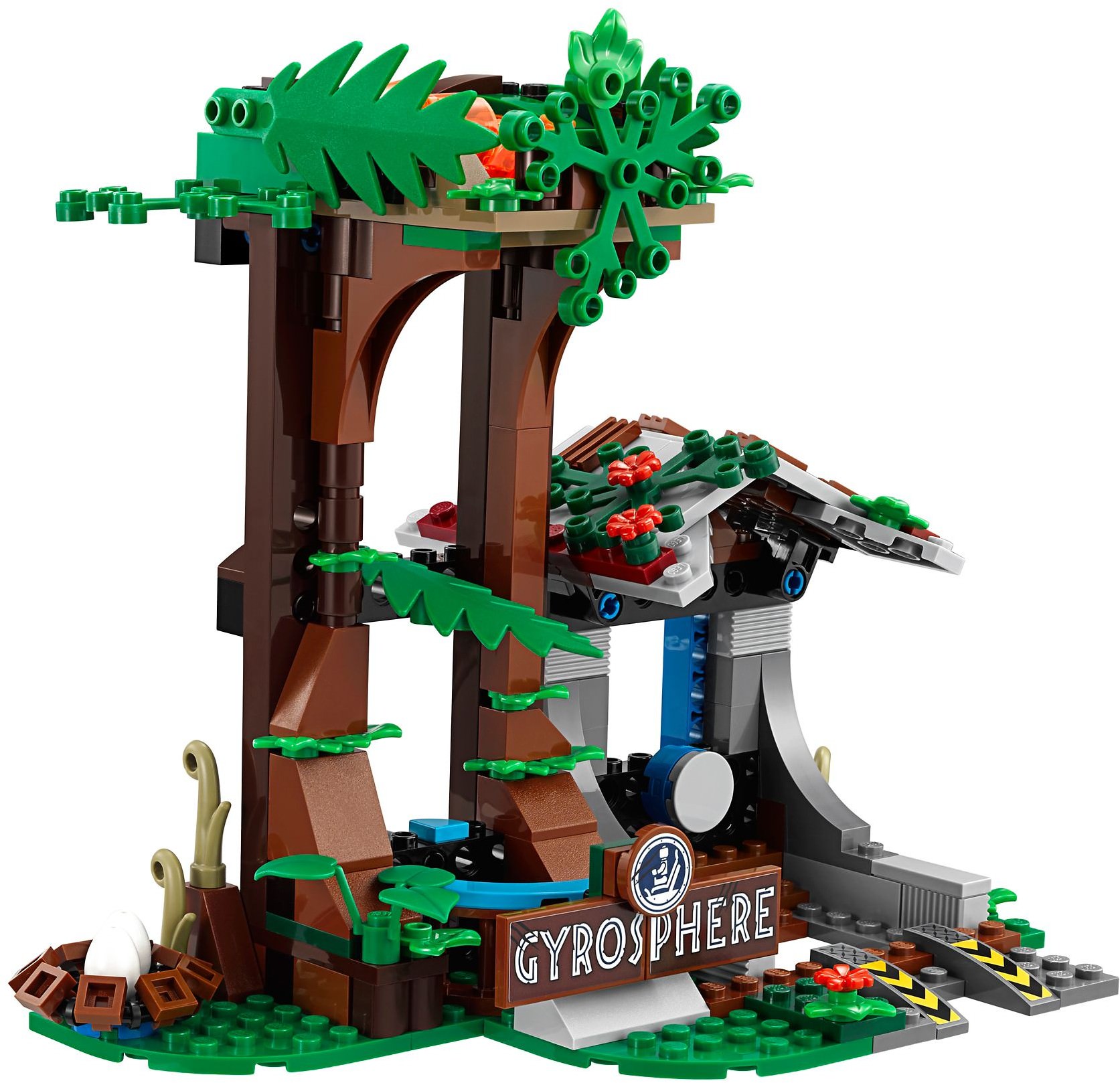 The tree itself is made from two extra tall Technic bricks, so is not very organic looking. That said, slopes and leaf pieces have been used in front to at least try to make it look slightly natural.

The back of the build has been reinforced with Technic pieces so looks pretty ugly from the back, though most of the time I think you will only play with this from the front. 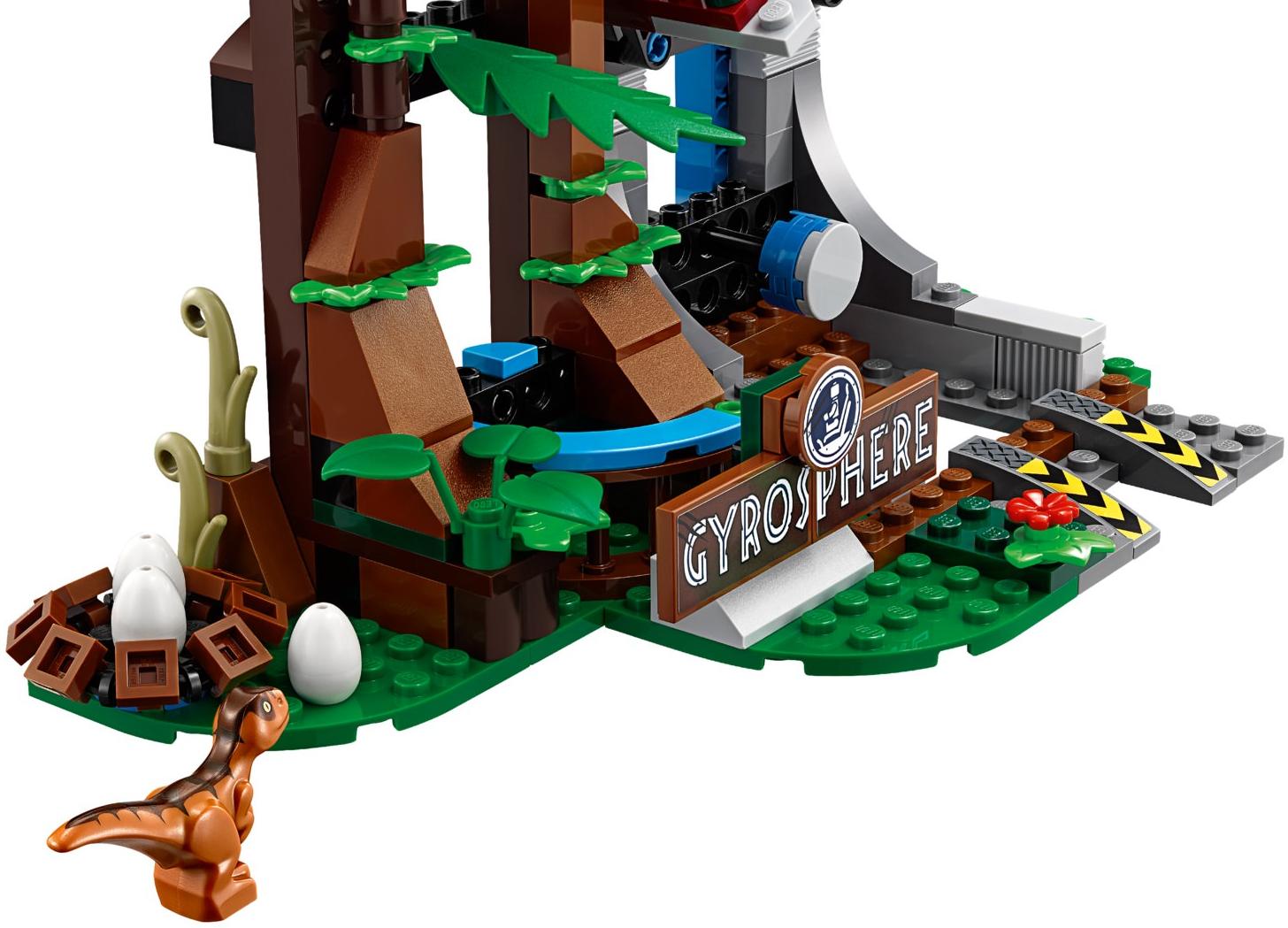 There’s also a dinosaur nest to the left with a few eggs in it. 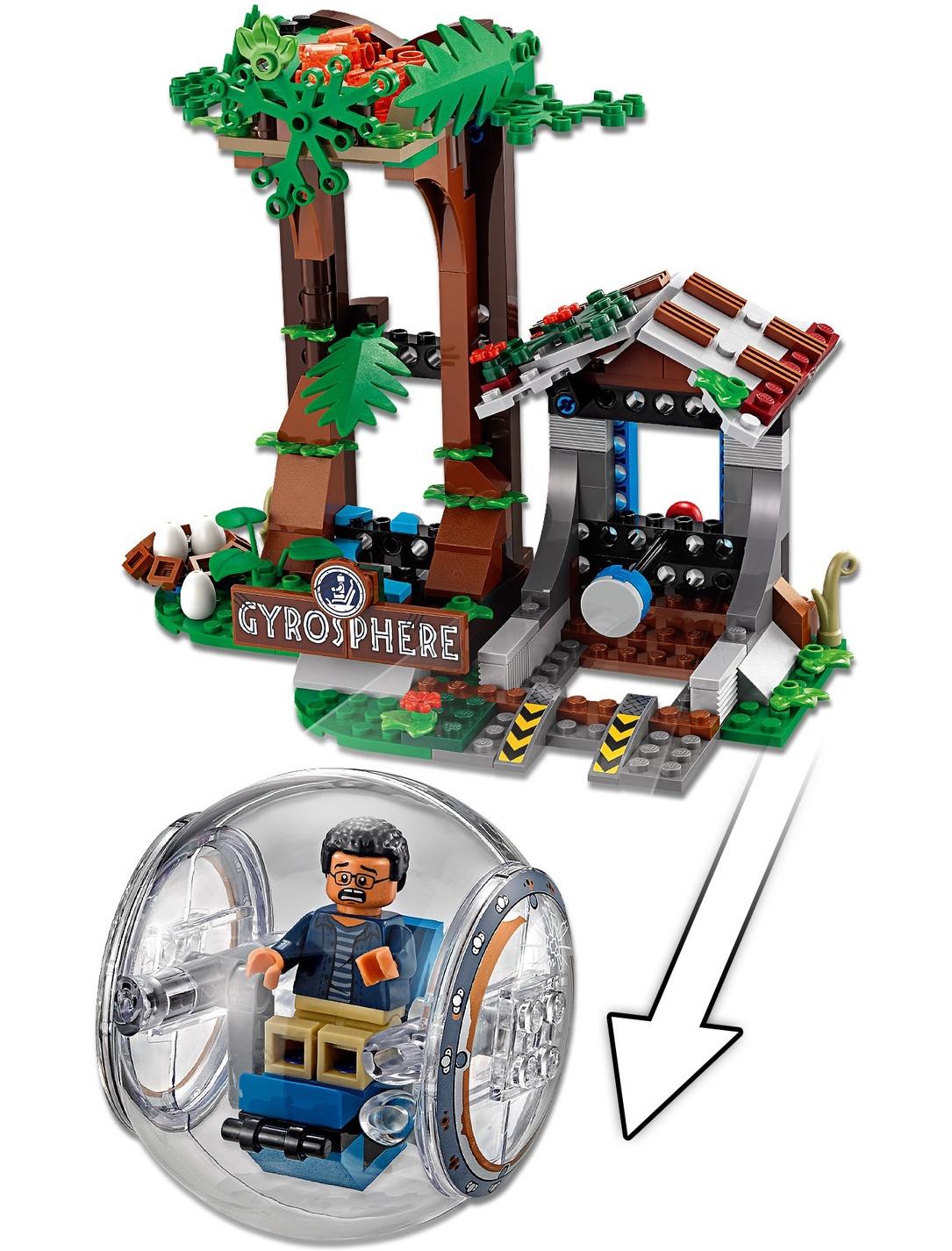 There’s a place to rest the gyrosphere, and you can push a red sphere piece at the end to send it rolling off. 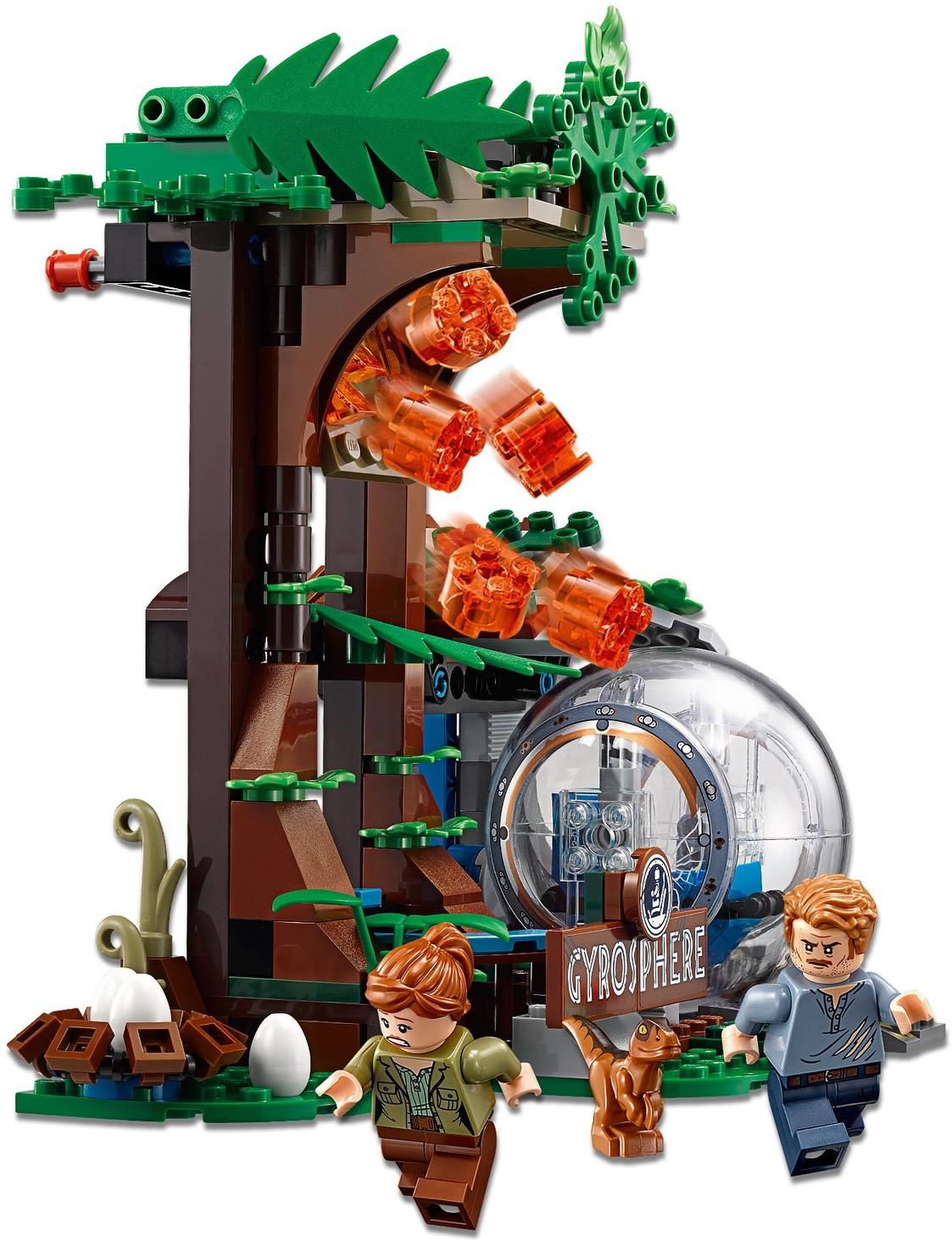 There’s also a red axle piece at the top of the tree which, when you pull it, opens a trapdoor that releases translucent orange 2×2  round bricks, simulating a volcanic eruption on Isla Nublar. 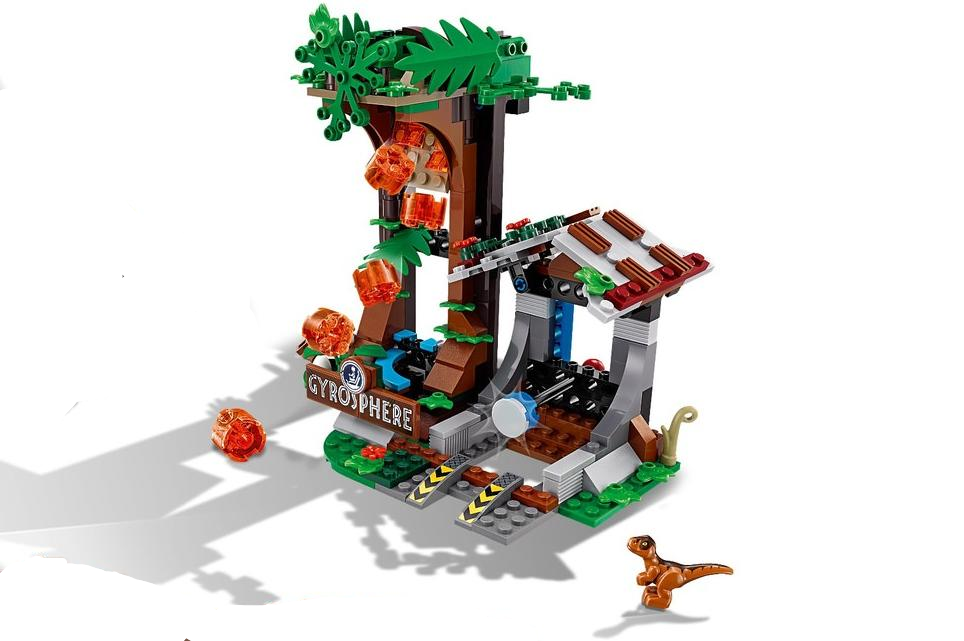 Five pieces in total are included, though the trapdoor itself has a few translucent orange tiles and slopes attached for embellishment too.

I am a fan of this build overall, as I think it very convincingly represents an overgrown tourist attraction. The eruption feature is whatever, but I just like how it looks.

All things considered, I think this set is a little disappointing on the whole. The overgrown gyrosphere launcher is quite nice but I don’t like how the truck looks with the truck body placed awkwardly high compared to the wheels. The figure selection is not bad but one more minifigure would’ve been a lot better. The price is alright in the UK but too high elsewhere – I think $65 USD, $100 AUD, and $120 NZD would be a fairer price. I think playability is the set’s strongest aspect, as apart from the pretty empty mobile lab, it’s a pretty fun playset.

Thanks for reading! Let me know your thoughts in the comments below 🙂 I’ll drop a render of the LDD file below and if you want the LDD file you can contact me 🙂 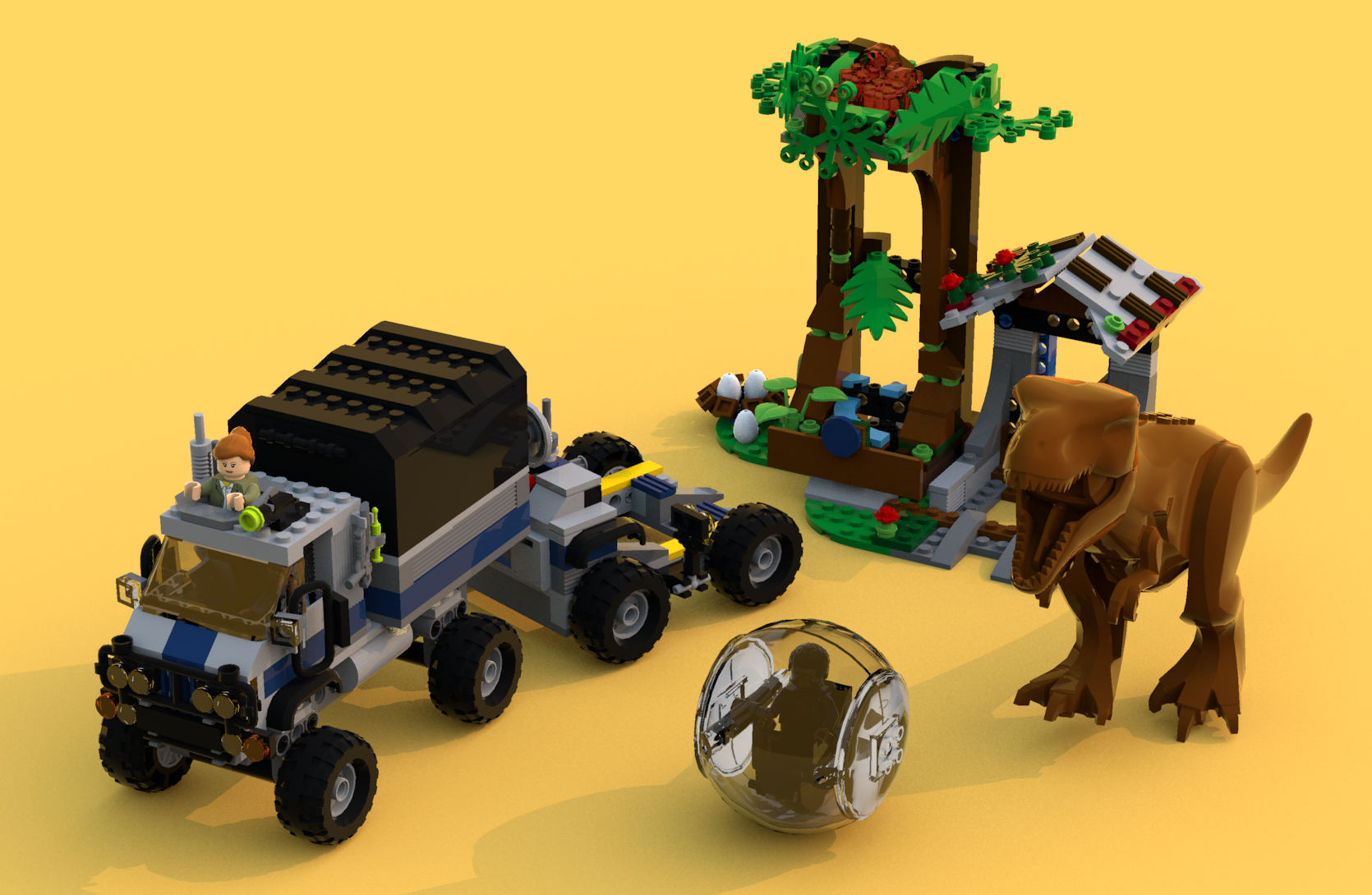