Hey guys! Sorry about not posting for the past few days – I’ve been working on the Brick Pals Holiday Gift Guide! You can check out Part 1 and Part 2 here, and there is more to come! 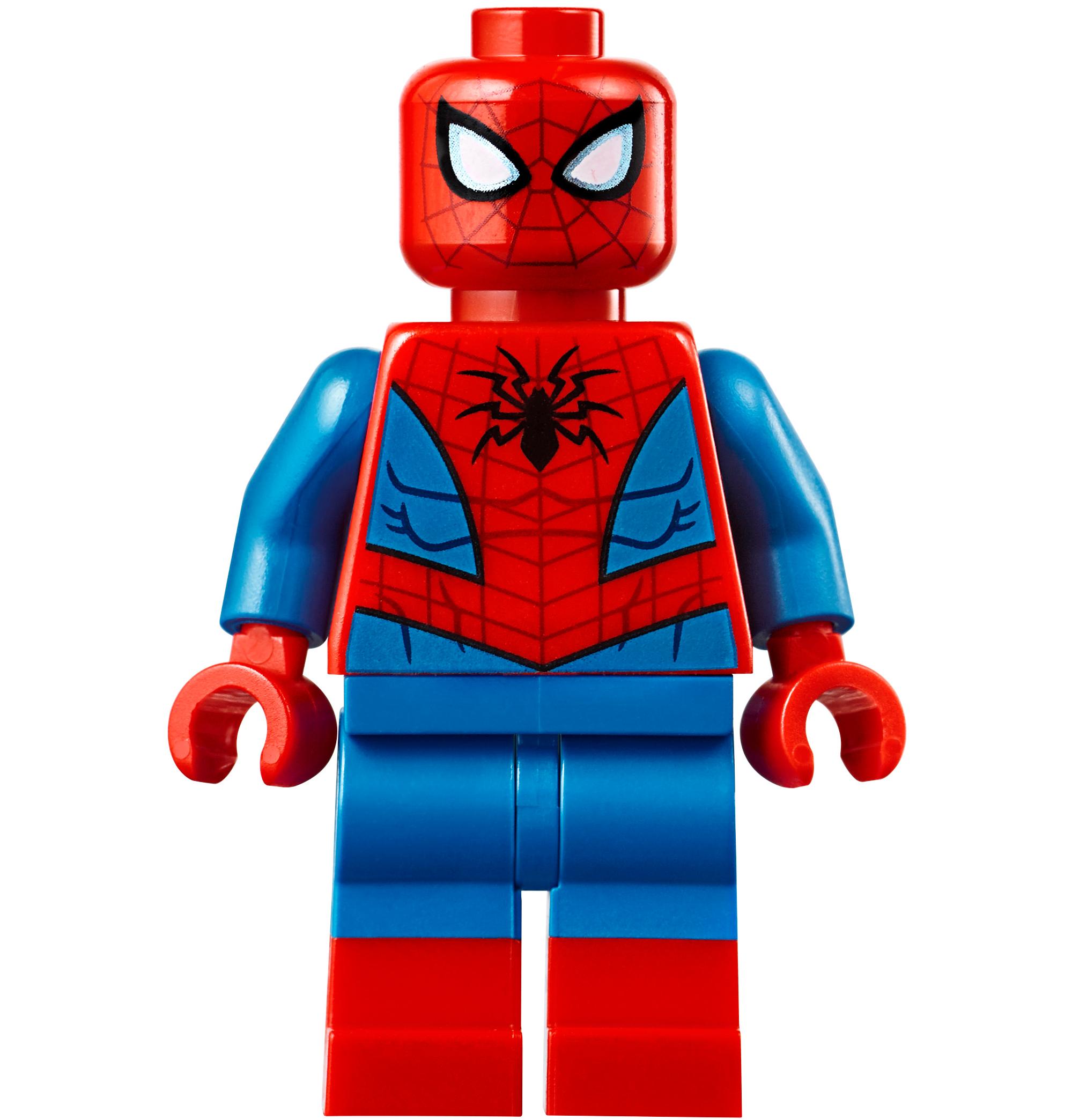 The first minifigure of the set is the new 2019 Spider-Man minifigure. The classic Spidey has been updated for 2019, with new prints. The eyes have silver and blue highlights, the webbing on his head and torso is a dark red instead of the old black, the base color of the torso is red, and he has dual-molded legs. 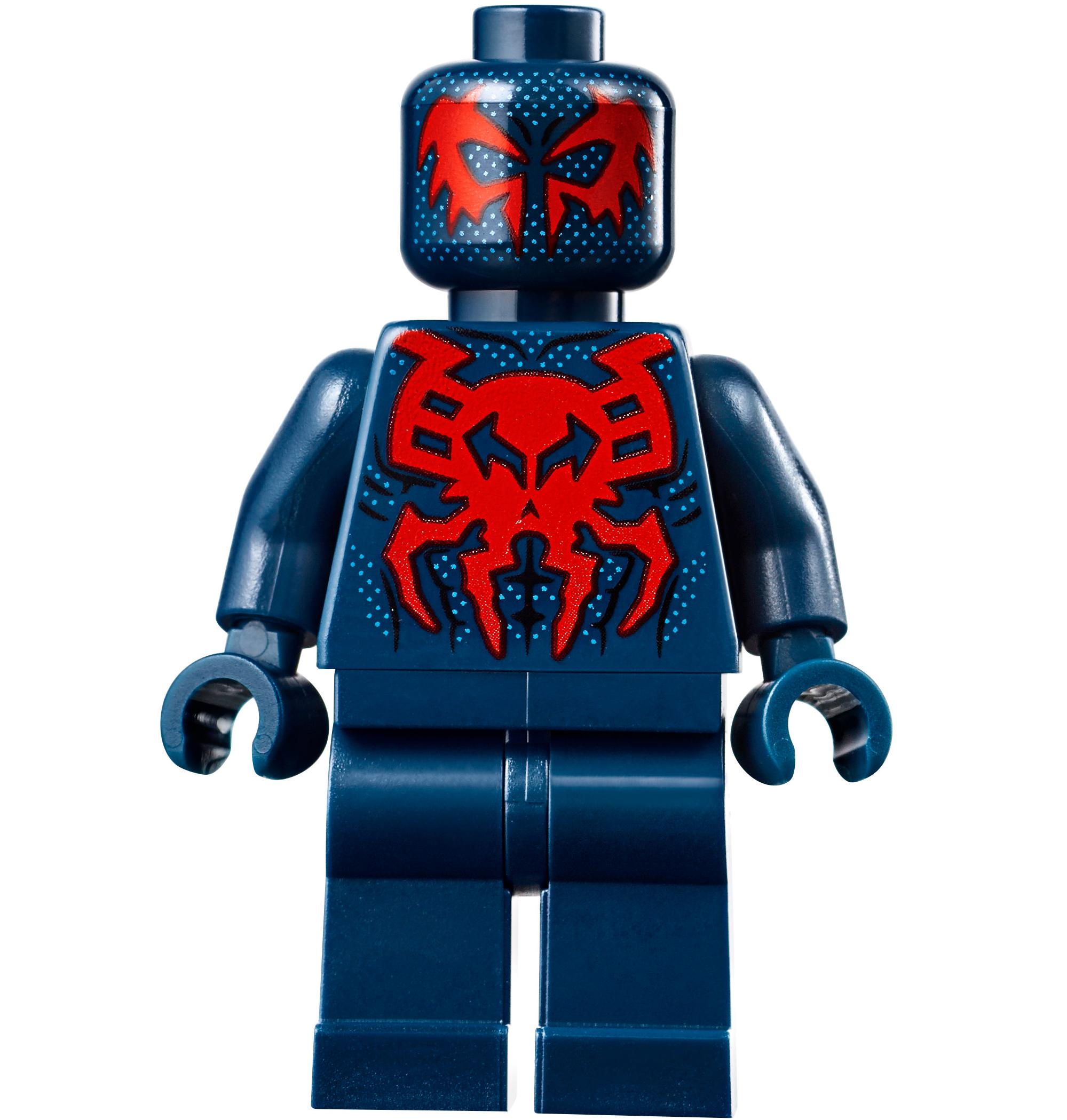 Next up is the new Spider-Man 2099, which first appeared in the LEGO Marvel Superheroes 2 videogame. This minifigure has a dark blue color scheme and has red ink-like printing on the head and torso. There are also little blue dots for texture/contouring on the minifigure head and torso which looks good, but these do not continue onto the arms or legs which is disappointing to me. 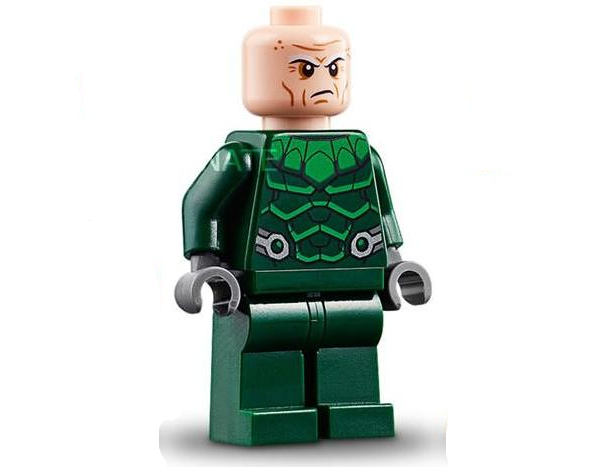 Next up is the Vulture. This character first appeared in a 2016 comic-book set, and then made an appearance in the MCU set 76083 Beware the Vulture. This minifigure has an updated torso print, which shows a more tech-like dark green suit. The head is same as the previous two Vulture minifigures, with an angry old expression. 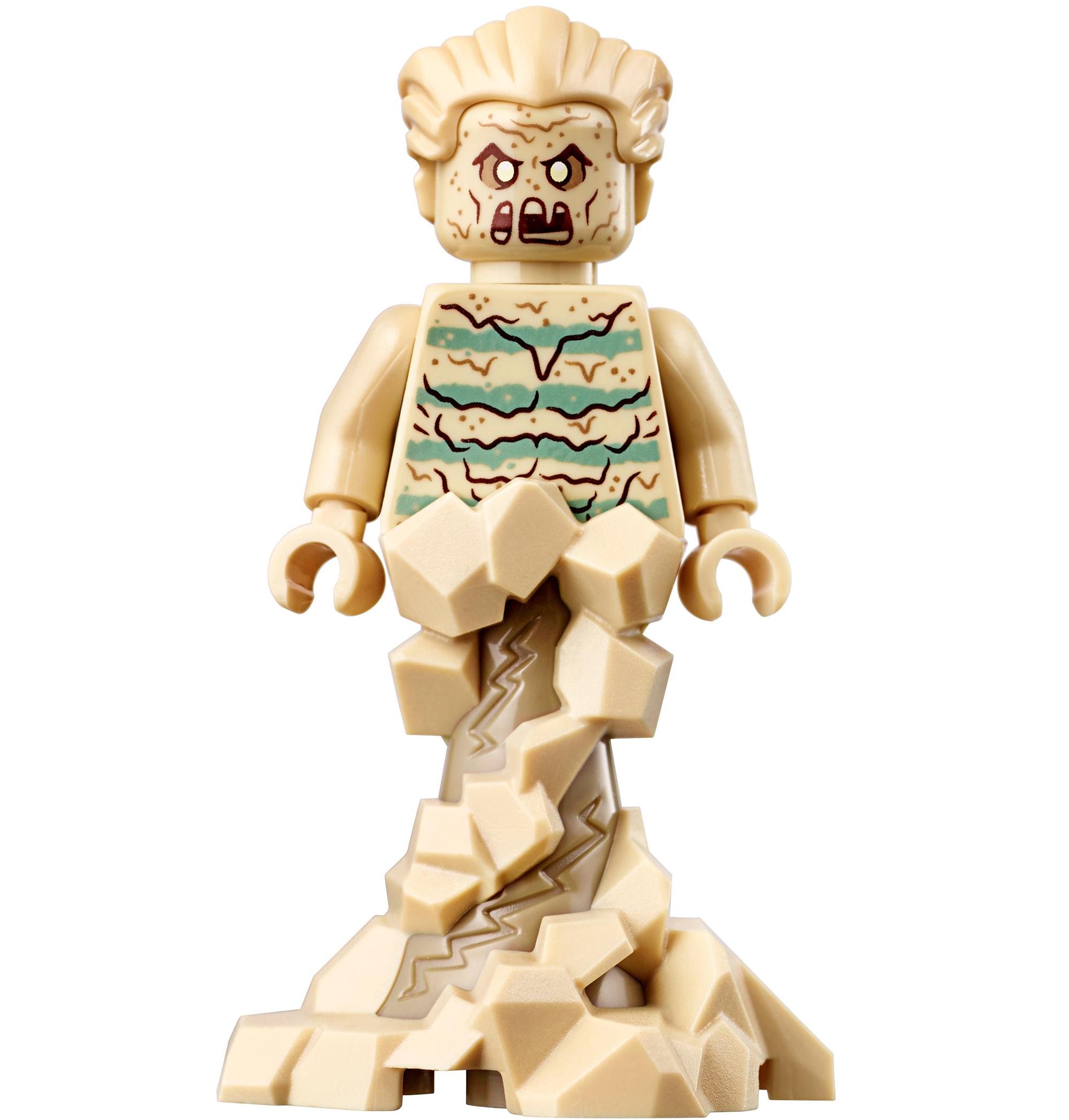 Last but not least is the Sandman. Unlike previous LEGO Sandman minifigures, which depicted the character mid-transition into his sandy look, this Sandman minifigure has gone full sand monster style. The whole minifigure has a tan base color and looks really good. Sandman has a widow’s peak hairstyle, a double-sided head with scary and confused expressions, a tan torso with sandy muscular torso and faint stripes from the shirt, along with a recolor of a Nexo Knights leg piece that looks phenomenal in its tan and dark tan form. It shows Sandman swirling up on a sand pedestal. 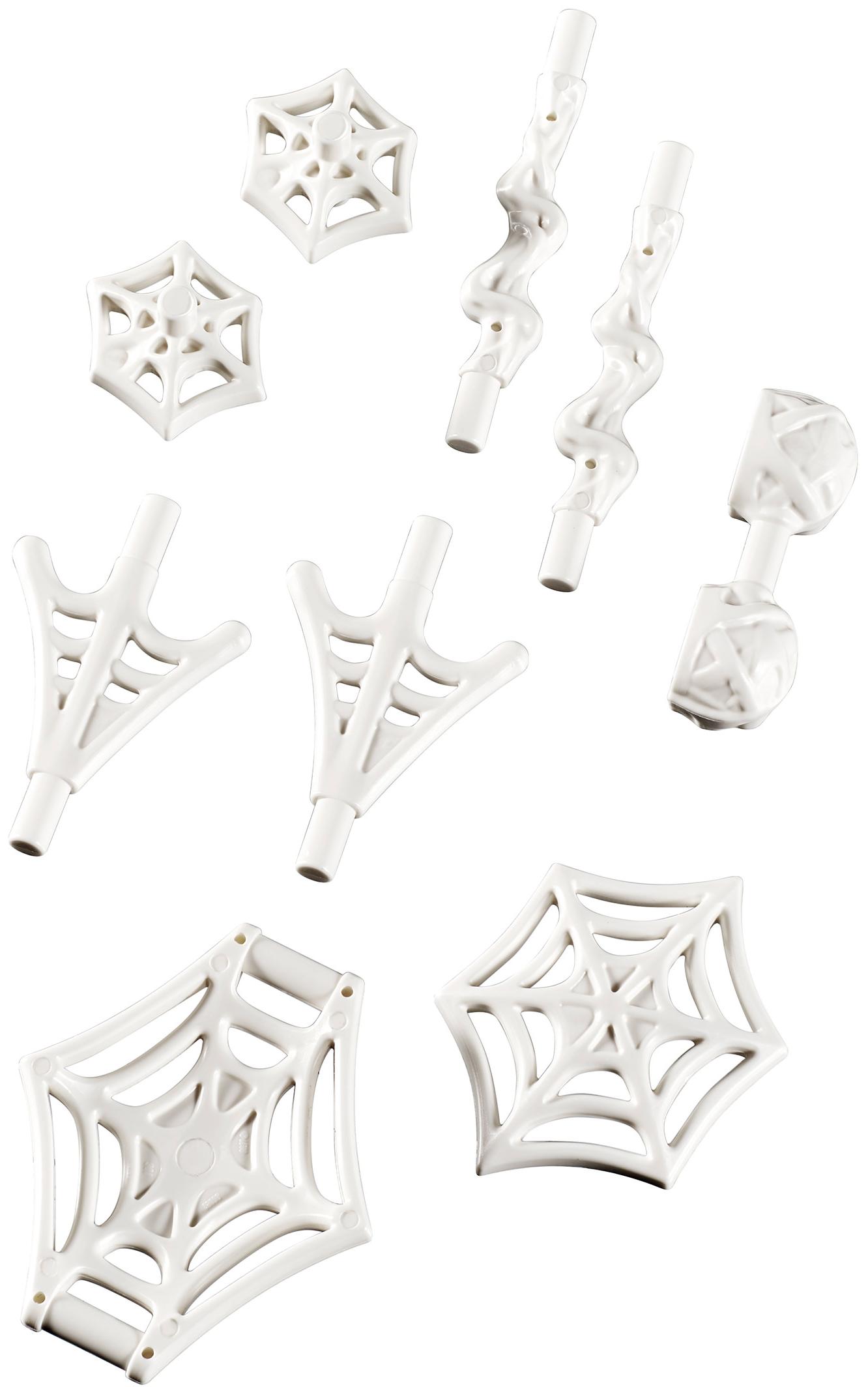 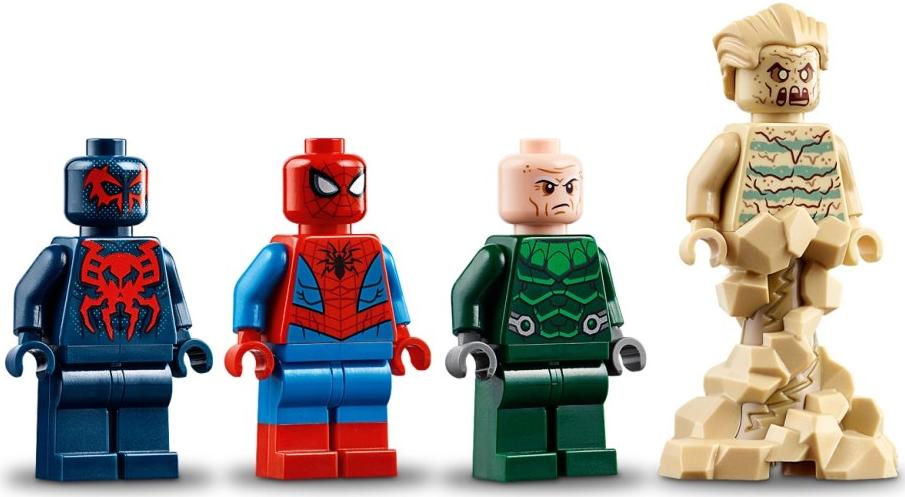 Overall, this minifigure selection is not bad. Spider-Man 2099 and Sandman are good to get, Spider-Man is nice but not exclusive, and the Vulture figure is okay. It would have been nice to get a new villain or something though. Now let’s move on to the builds! 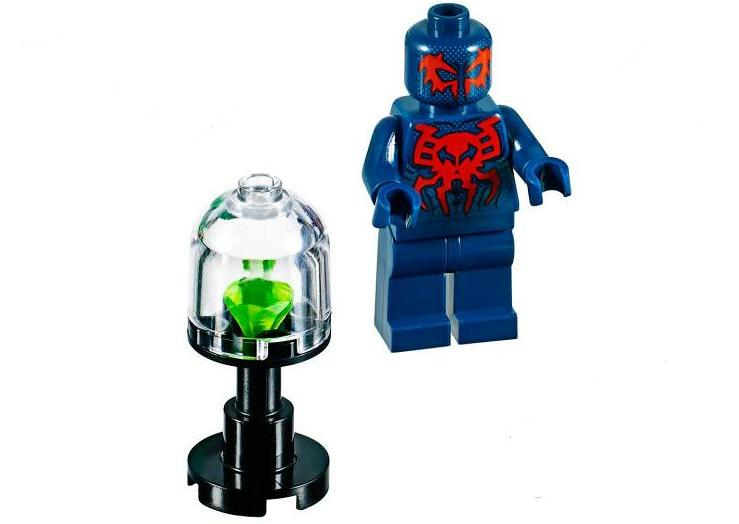 There’s one super tiny sidebuild included – a little jewellery case made from three pieces. It has a clear glass dome and a translucent light green jewel inside. This is presumably what the two villains are after. 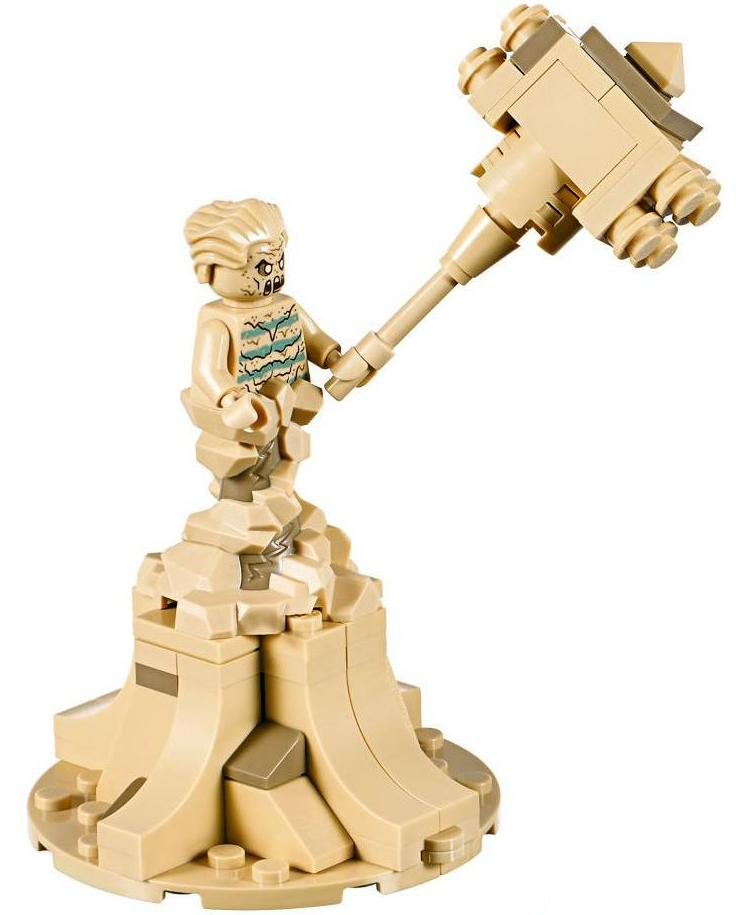 The next build is a sand pedestal for the Sandman. This represents him creating a sand mound to elevate himself to intimidate his enemies. 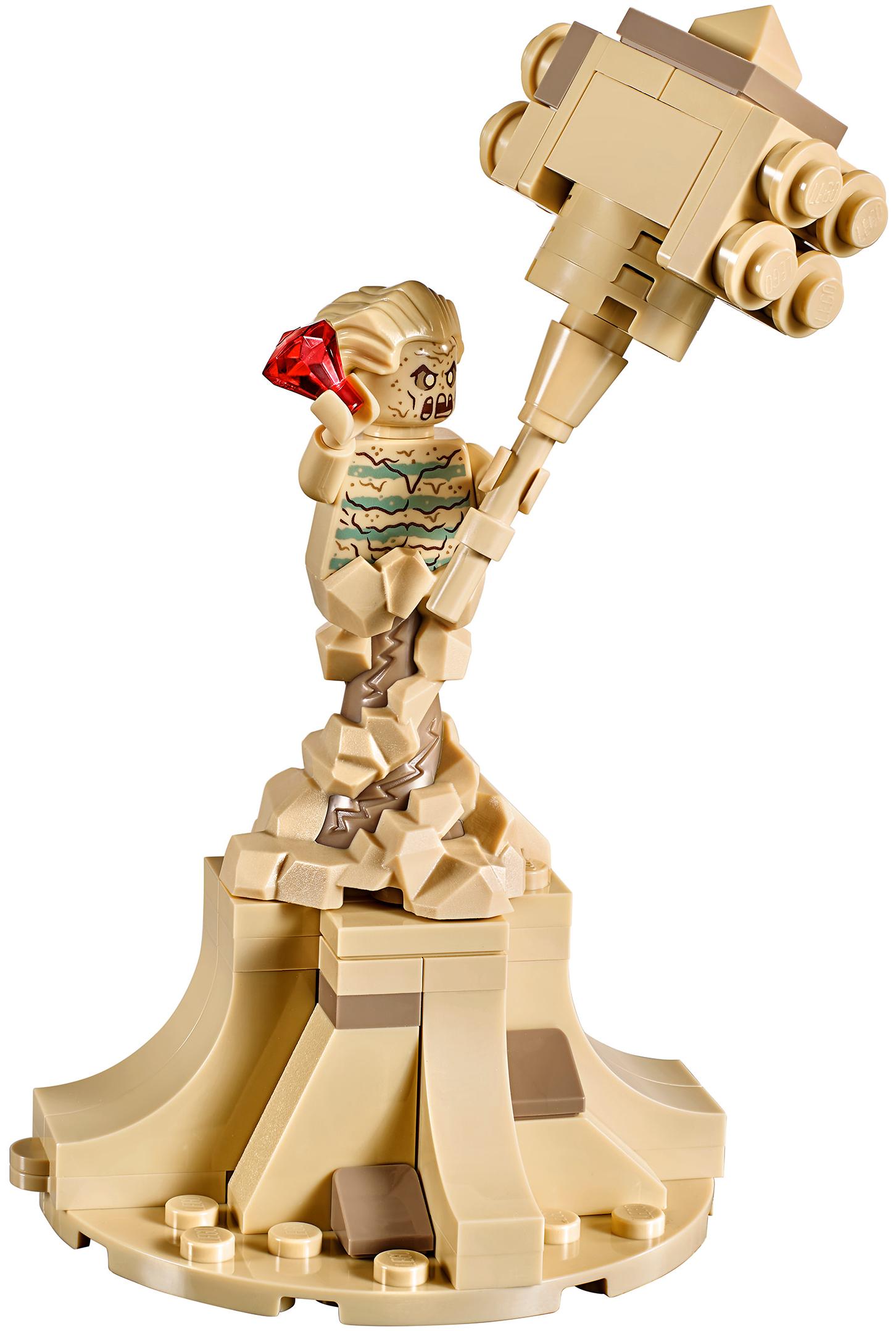 There are a bunch of slope pieces used in the build, along with some dark tan highlights and a round 8×8 base. Sandman also comes with a giant brick-built sand hammer. 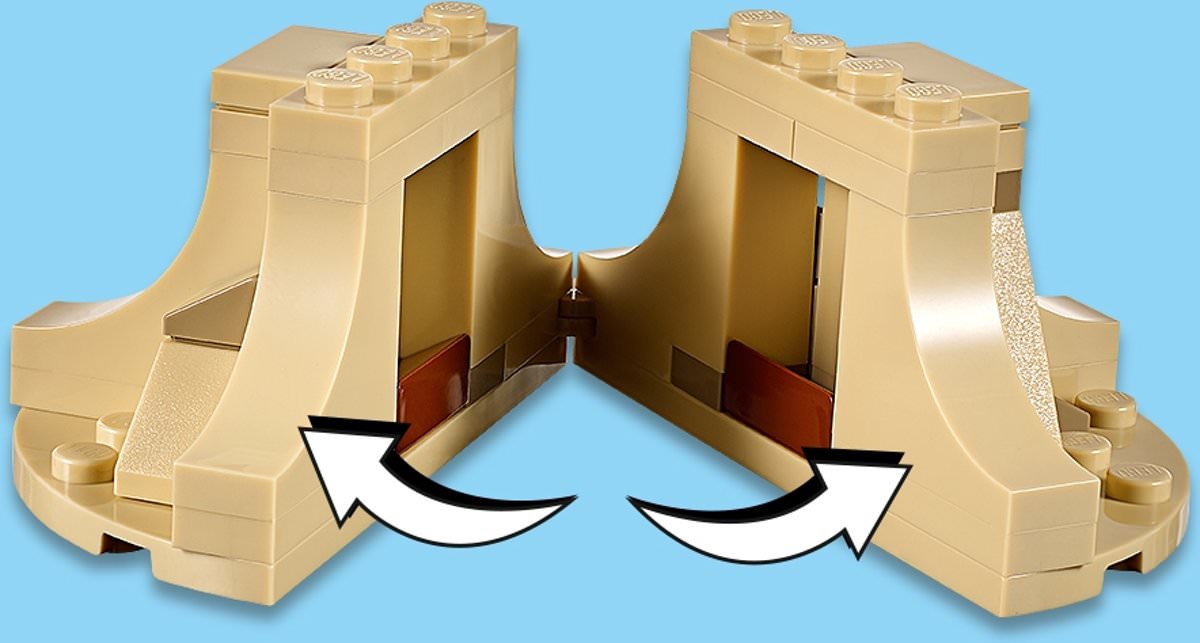 The play feature of this pedestal is that it can be hinged open and there is a secret storage compartment inside. You can store the stolen jewels here – in addition to the translucent light green one, there’s also a translucent blue and translucent red one included. I like this play feature as it represents how Sandman can store things inside his sand body. 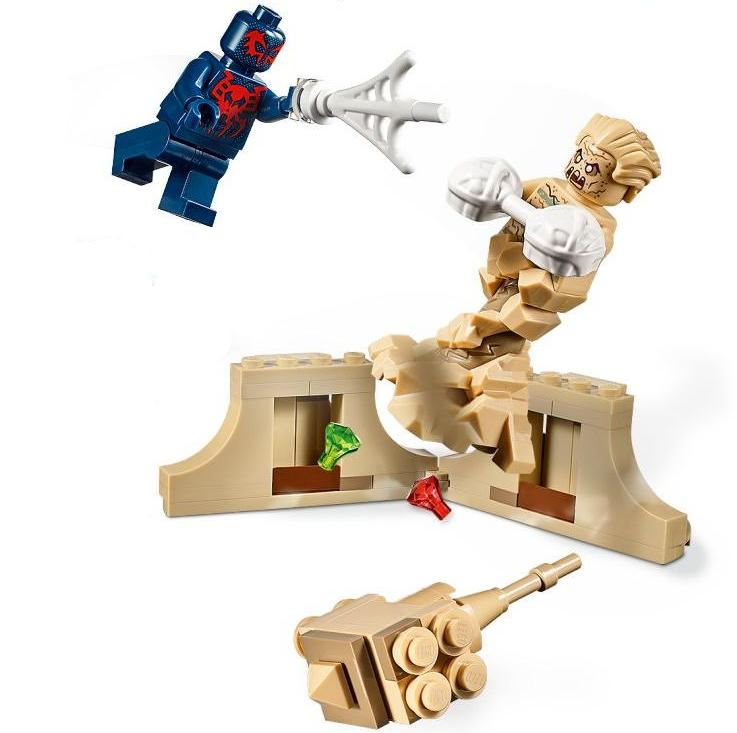 You can also knock Sandman off his sand pedestal and place the web handcuffs on him to stop his villainy! 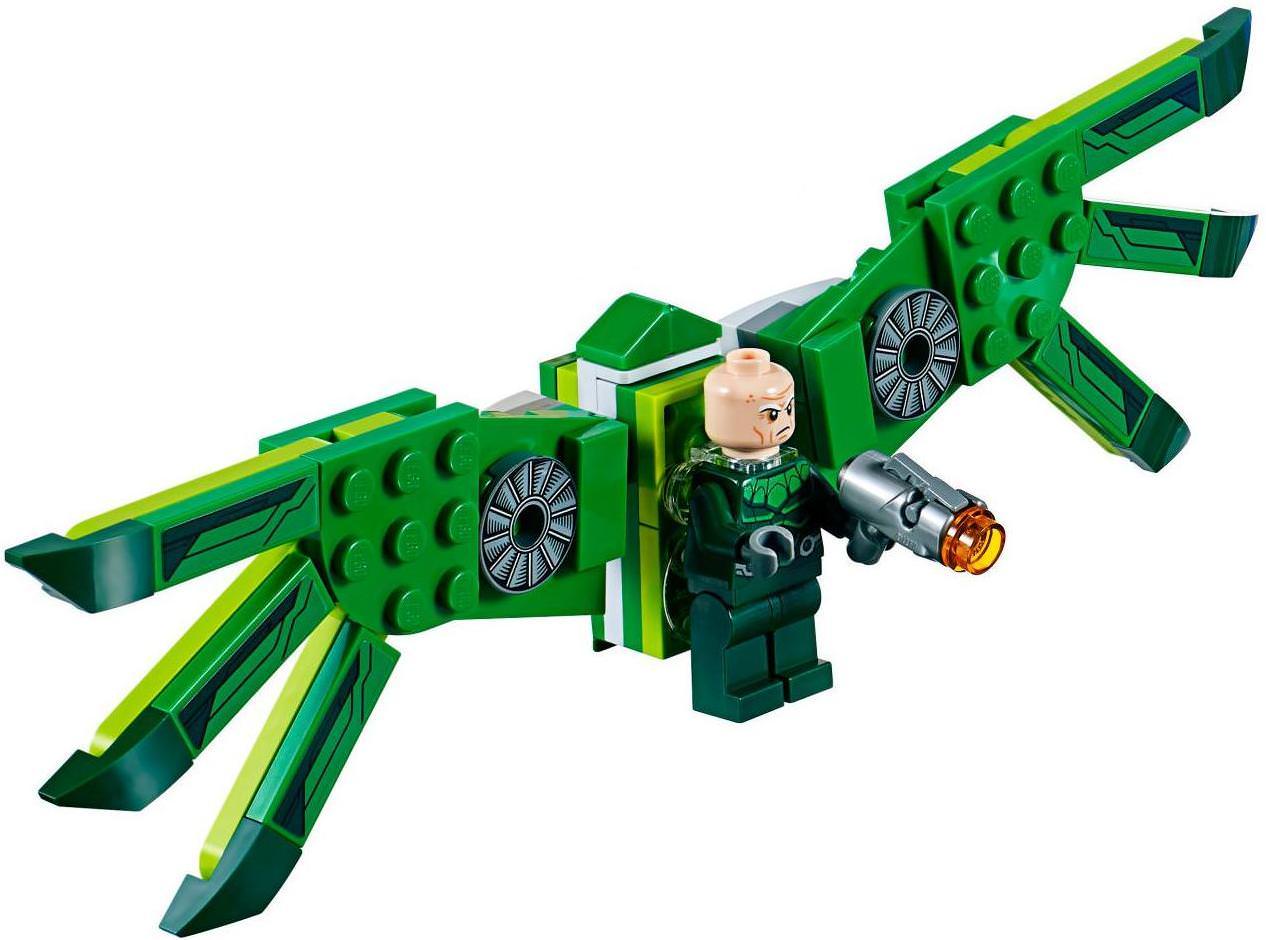 The next build in the set is Vulture’s wingsuit. It’s brick-built and attaches to Vulture via a clear neck bracket piece. Vulture also gets a silver stud shooter. 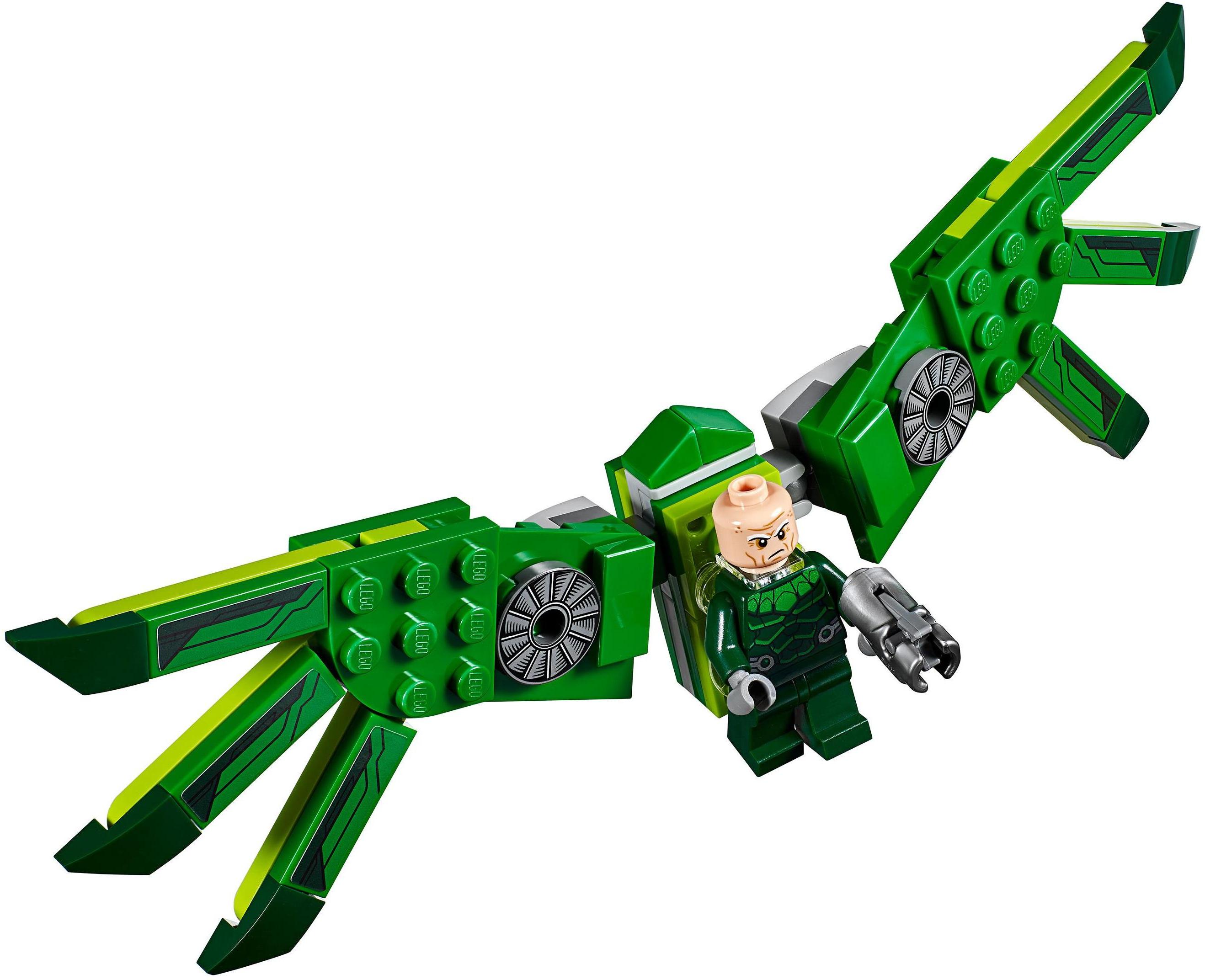 It has a regular green color scheme with some lime green and dark green highlights. The shape of it resembles the Vulture’s wingsuit in Spider-Man: Homecoming, especially with the clawed wingtips. I think it looks good and I like the printed 2×2 round turbine tiles with holes.

The wings are mounted on mini ball joints so are pretty poseable. I also like the clawed ends of the wings, which use angled curved slopes and stickered 1×3 tiles. The wingsuit is a bit plain but it’s still quite good overall. 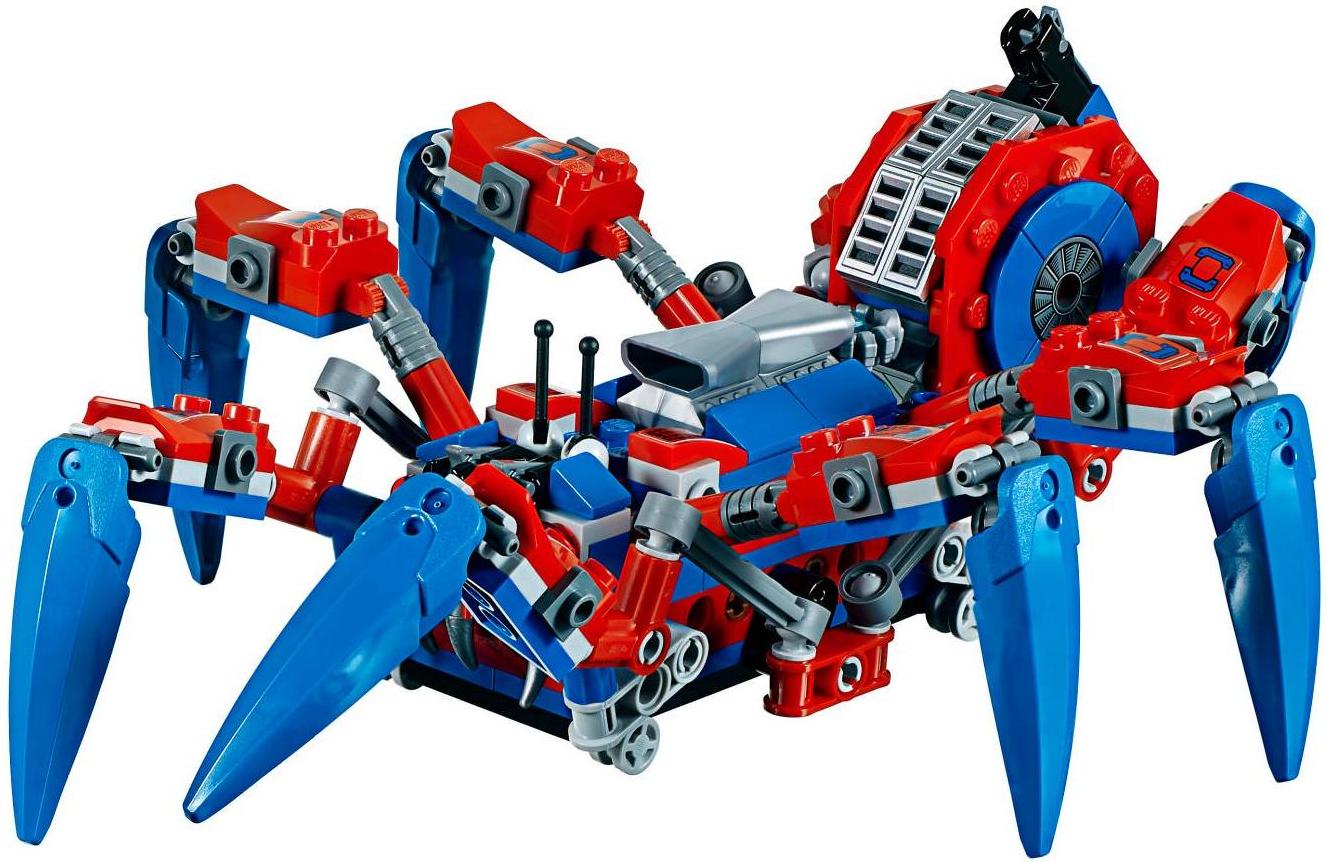 Finally, we move on to the main build of the set – the eponymous Spider-Crawler. It has a red and blue color scheme, just like Spider-Man, along with eight spiky legs. 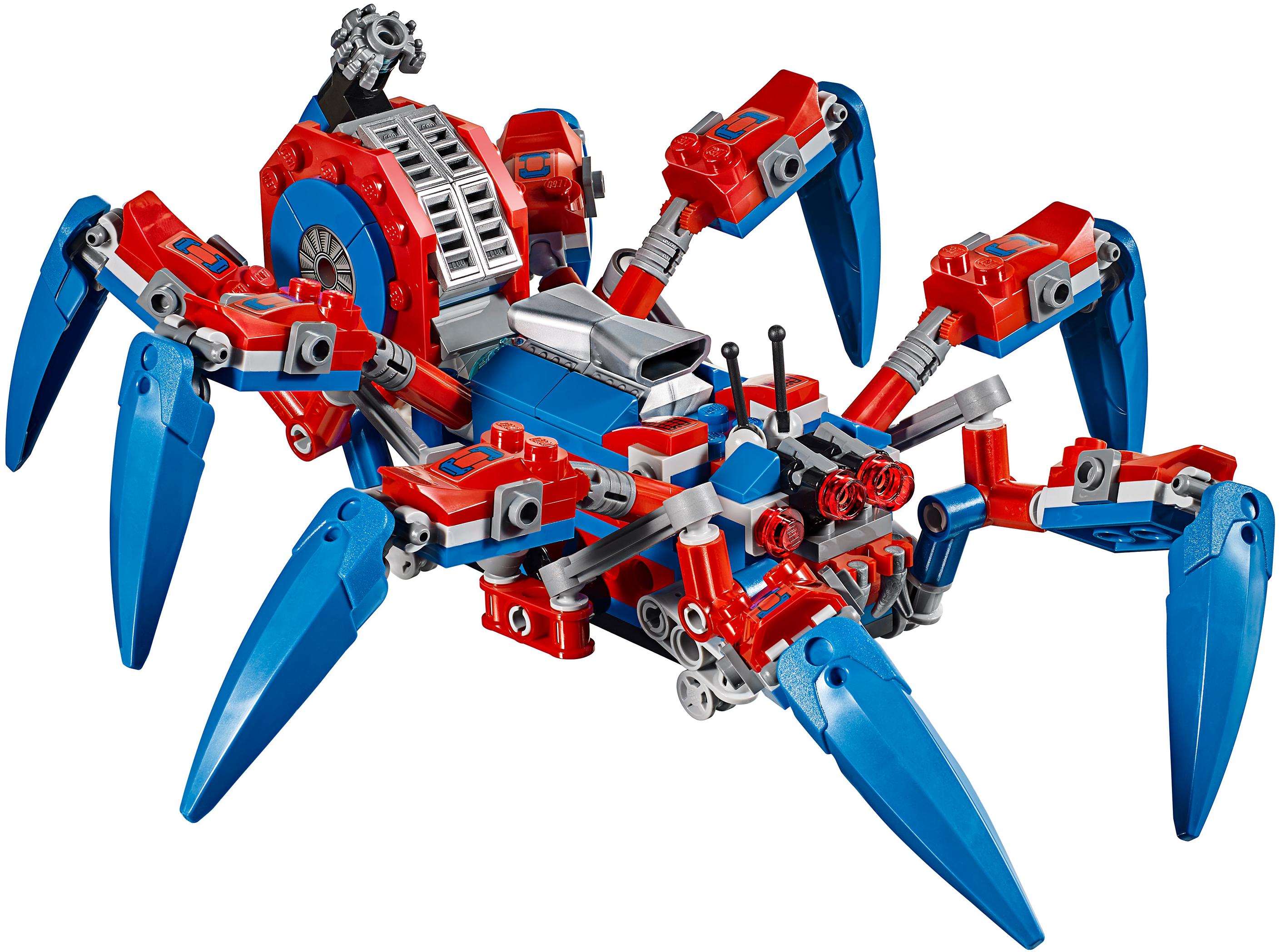 There are quite a few details on this set – the red slopes on the legs are all stickered (though I wish they were printed as there are 8 of them), there are a pair of stud shooters on the front plus a couple of translucent red studs to represent a spider’s “eyes”, a pair of silver horns at the front representing the spider’s “fangs”, a pair of silver engine blocks, a rounded abdomen build with chrome silver slope grille pieces, and a rear stud shooter mounted on the abdomen that can fire off either the 2019 spider drone pieces (first introduced in the Nexo Knights theme) or some of the web blast pieces. 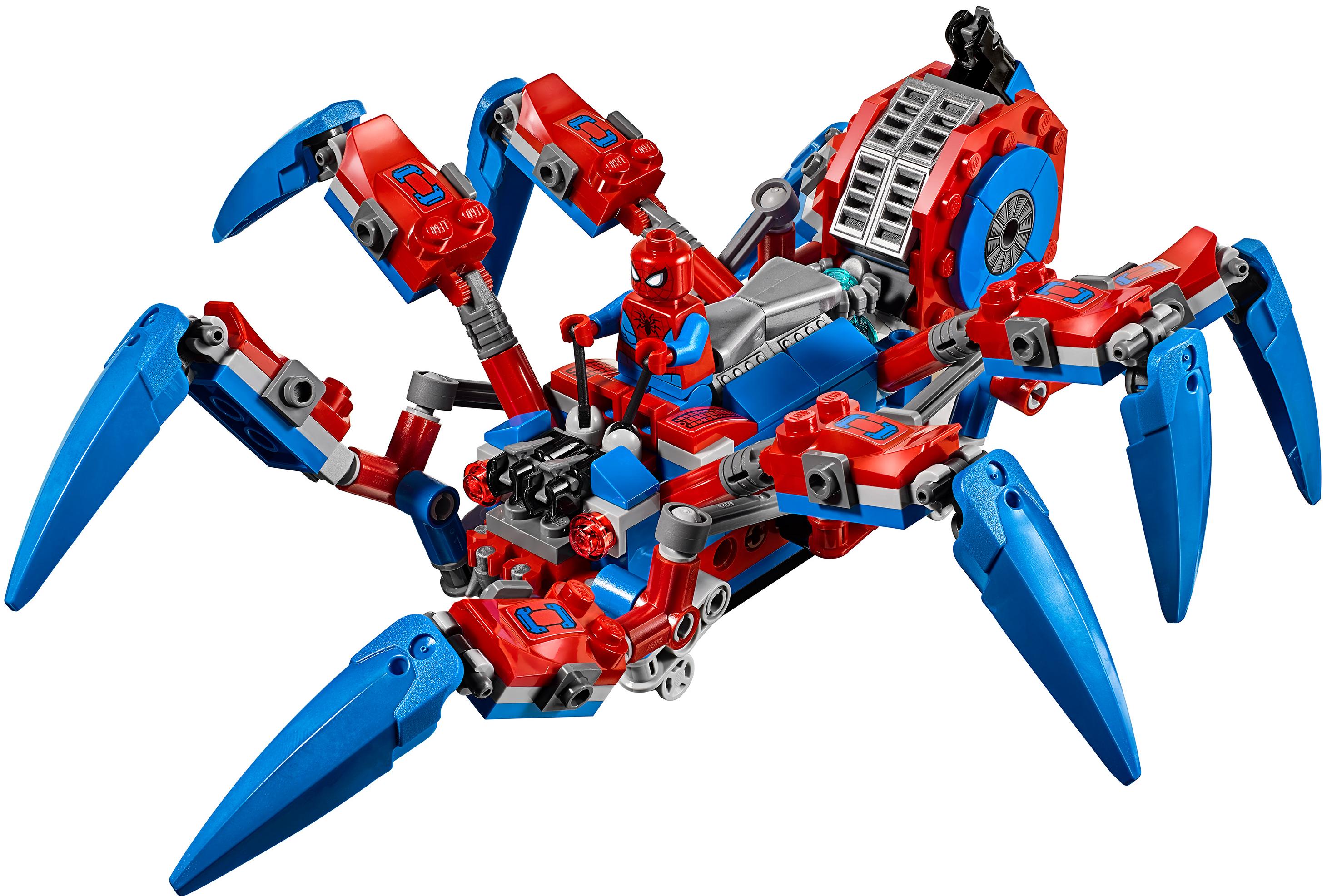 Spider-Man gets a seat in front of the engine pieces, where he gets a pair of joysticks to control the Spider-Crawler. 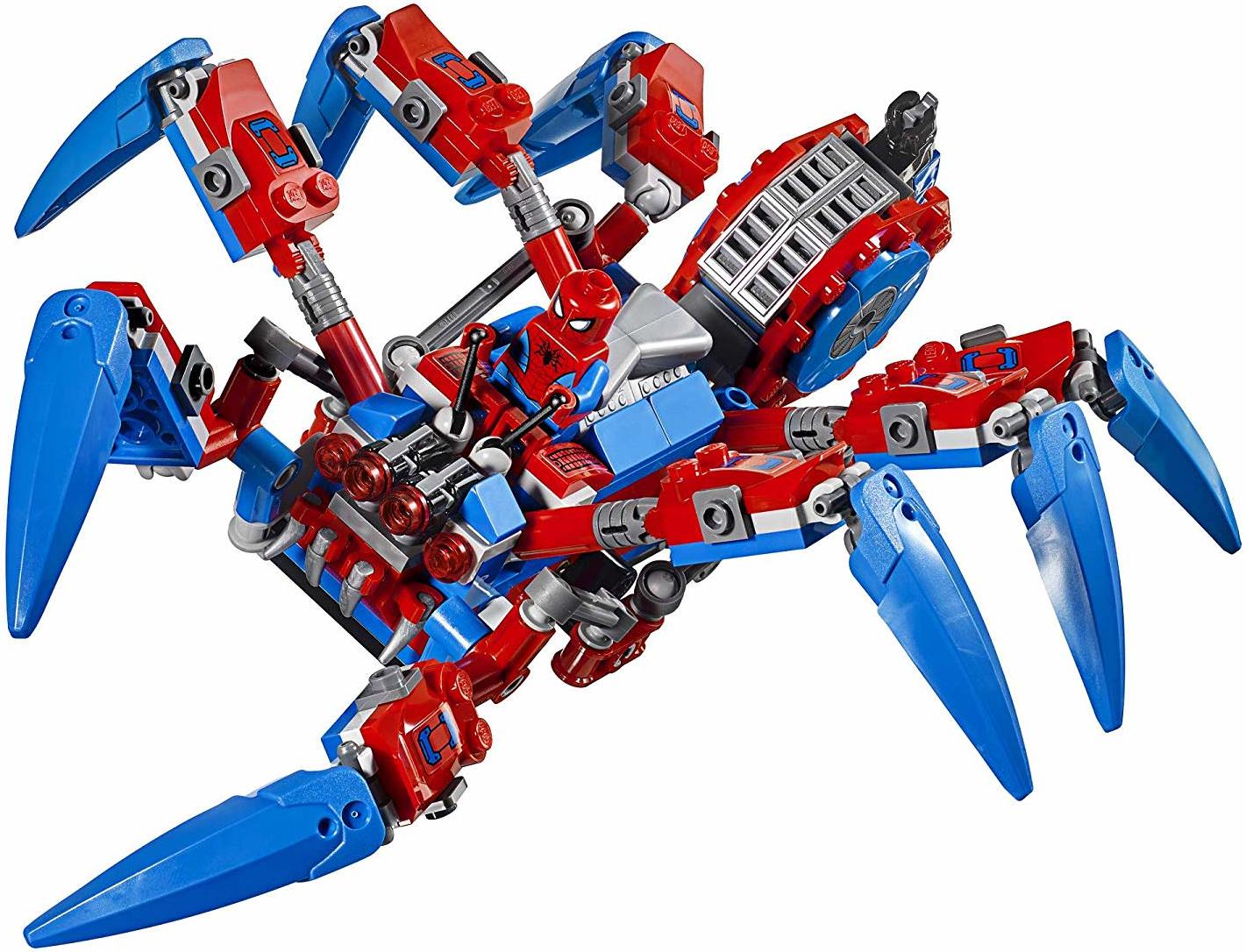 The legs of the Spider-Crawler are poseable at two sections each and so can be posed in a lot of ways. 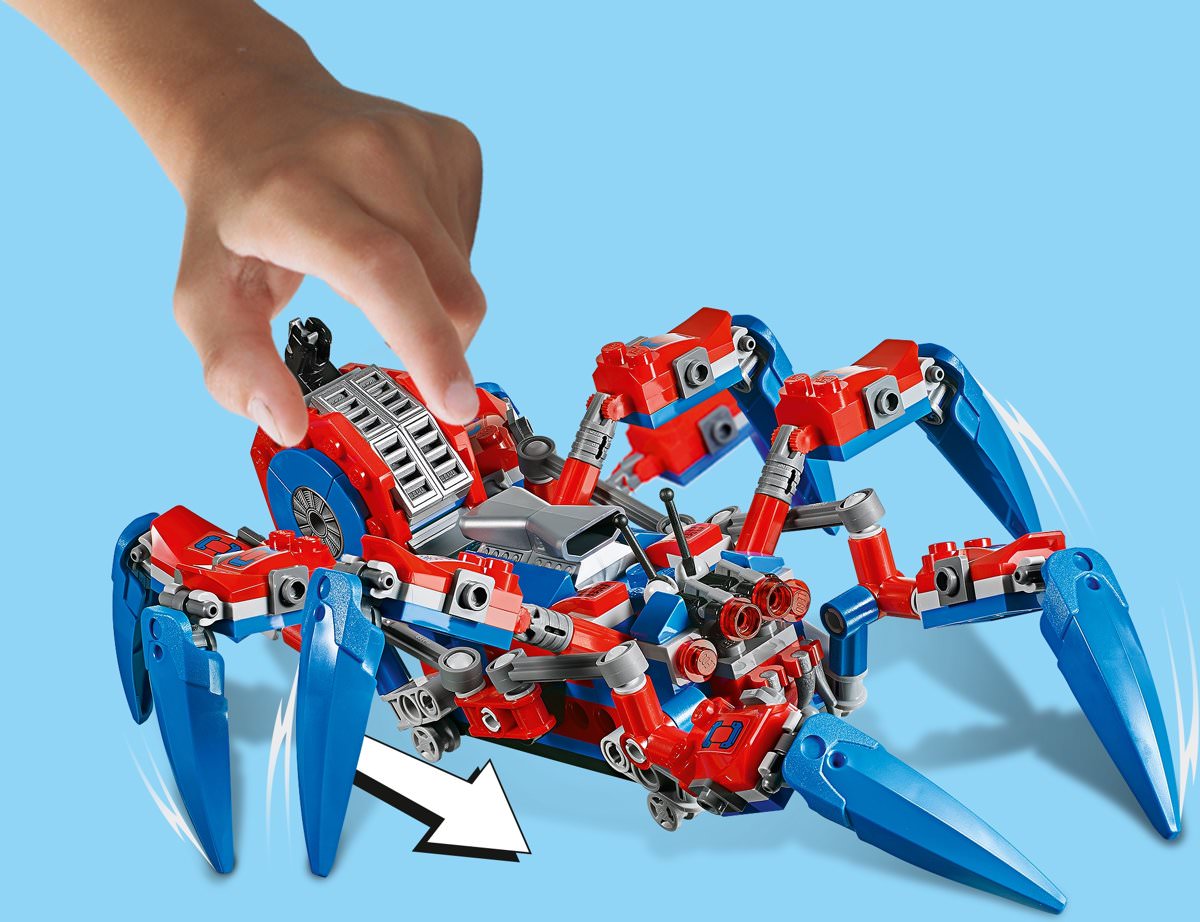 However, there’s also an inbuilt walking feature – push the Spider-Crawler set forward and a Technic mechanism will make all the legs move up and down. This actually looks pretty good, which pleasantly surprised me as LEGO walking mechanisms are usually not very good. The best part is that the Technic pieces used for the mechanism aren’t very obvious and just look like part of the mechanical detail of the crawler.

Overall, I think this is quite a good set. The minifigure selection is not bad (especially with that Spider-Man 2099 minifigure) and the builds are good. Playability is good (with the walking play feature and all the builds) and the value for money seems good to me, with the size of the builds and the number of minifigures.