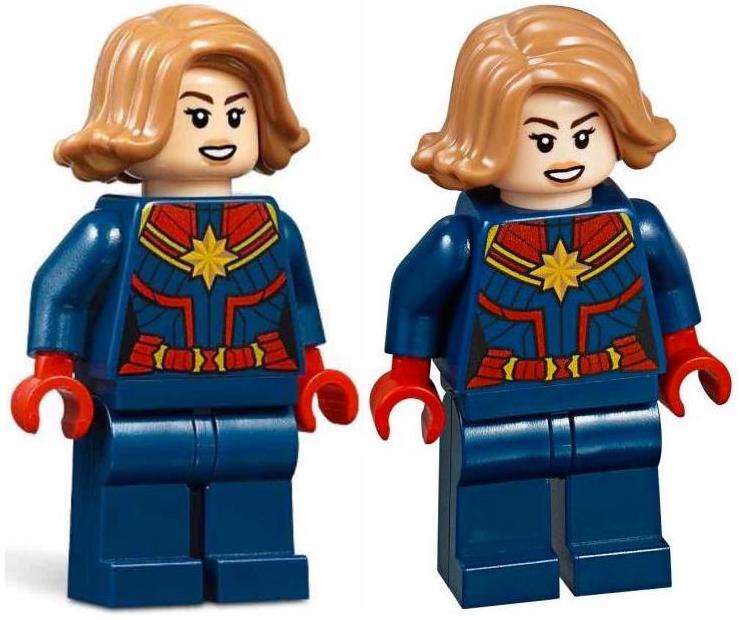 The first minifigure in the set is Captain Marvel herself and wow, she is pretty disappointing. The only new thing she gets is a new torso print – and it looks pretty good, but otherwise her figure looks weak. Her head is reused from Qi’Ra from the Solo wave and it’s not really a good fit. Her hair is a recolor of Black Widow’s but in my opinion it’s too short in comparison to Captain Marvel’s hair in the movie. Her legs and arms are unprinted which is unacceptable – why does she not have dual-molded red boots? why does she not have arm printing?

Captain Marvel is armed with two translucent light blue Power Blasts, which are again inaccurate. Yes, she does have glowing blue powers in the trailers, but when she goes full binary with the red, blue, and gold suit, she has orangey powers which I would have liked to see represented here. 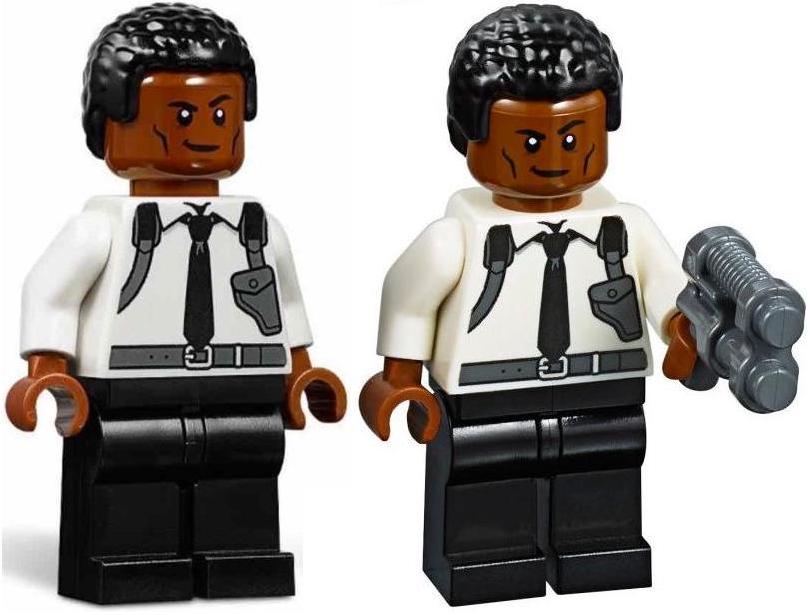 The second minifigure is Nick Fury, based on the younger version of him we see in the trailers. He has the black hairpiece introduced in 2015 for Finn – which I think suits him. He also has the double-sided head that was used for Cyborg in 76087 Flying Fox: Batmobile Airlift Attack. His torso print is, once again, the only new thing about him – it’s simple but I think it works, and could be used for any security guard minifigure. He has plain black pants and a grey gun.

This minifigure has about the same amount of detail as the Captain Marvel minifigure, but Fury’s outfit is a lot less detailed in the movie so I don’t really have too much problems with this figure. 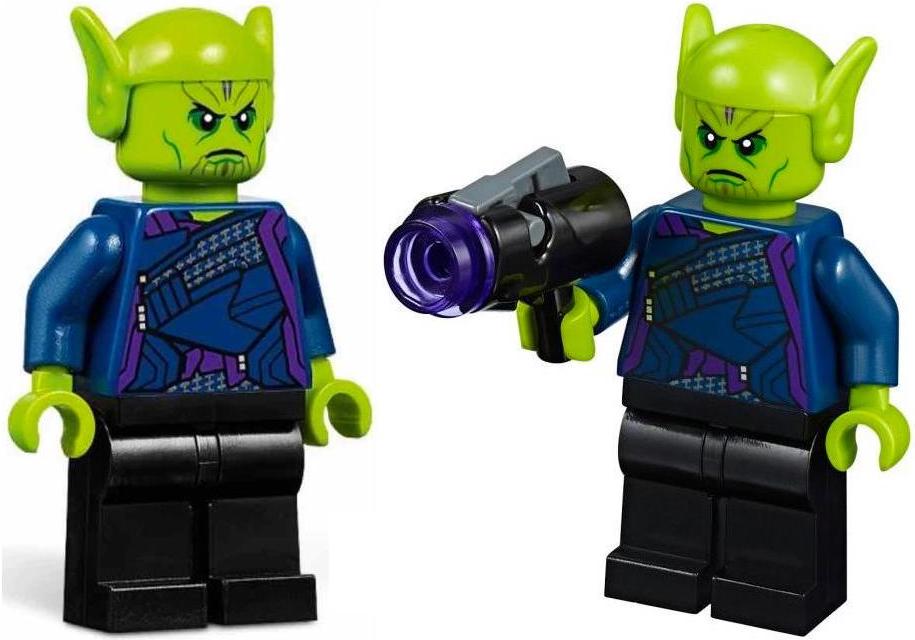 The final minifigure in the set is the Skrull antagonist, Talos. I believe this is Ben Mendelsohn’s second LEGO figure after Krennic. This minifigure has bright lime green skin, with a new face print that I think looks quite good. He has a head attachment which is also lime green to show the Skrull’s prominent ears. This is actually a new piece, though it is very similar to the Genie’s head attachment from the Disney CMF series. Unfortunately, I think this piece looks bad – the ears are much too long for a Skrull and the transition from the printed face to the unprinted head attachment looks very awkward to me.

Talos has a printed dark blue torso and plain dark pants. He has a stud shooter gun which fires translucent purple studs. 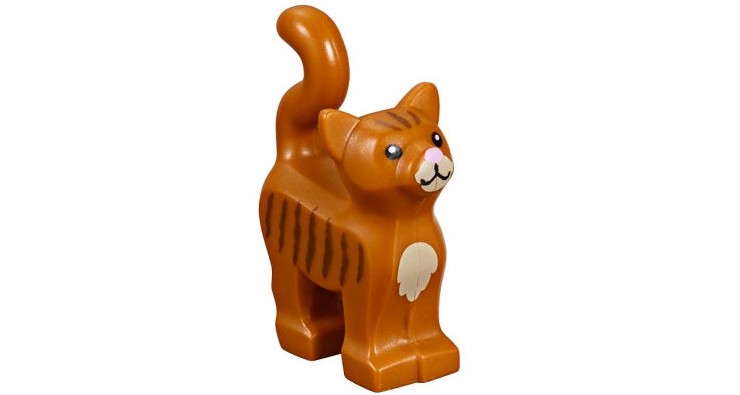 Last up, Goose the cat is included. Goose is Captain Marvel’s cat (technically an alien known as a Flerken), who was named Chewie in the comics. Some even speculate Goose is the culprit behind Nick Fury’s lost eye! Anyway, this is just a generic cat mold and print that has been used in 5 other sets. Goose connects via two studs at the base and its tail is a bar that can be grabbed by minifigures. 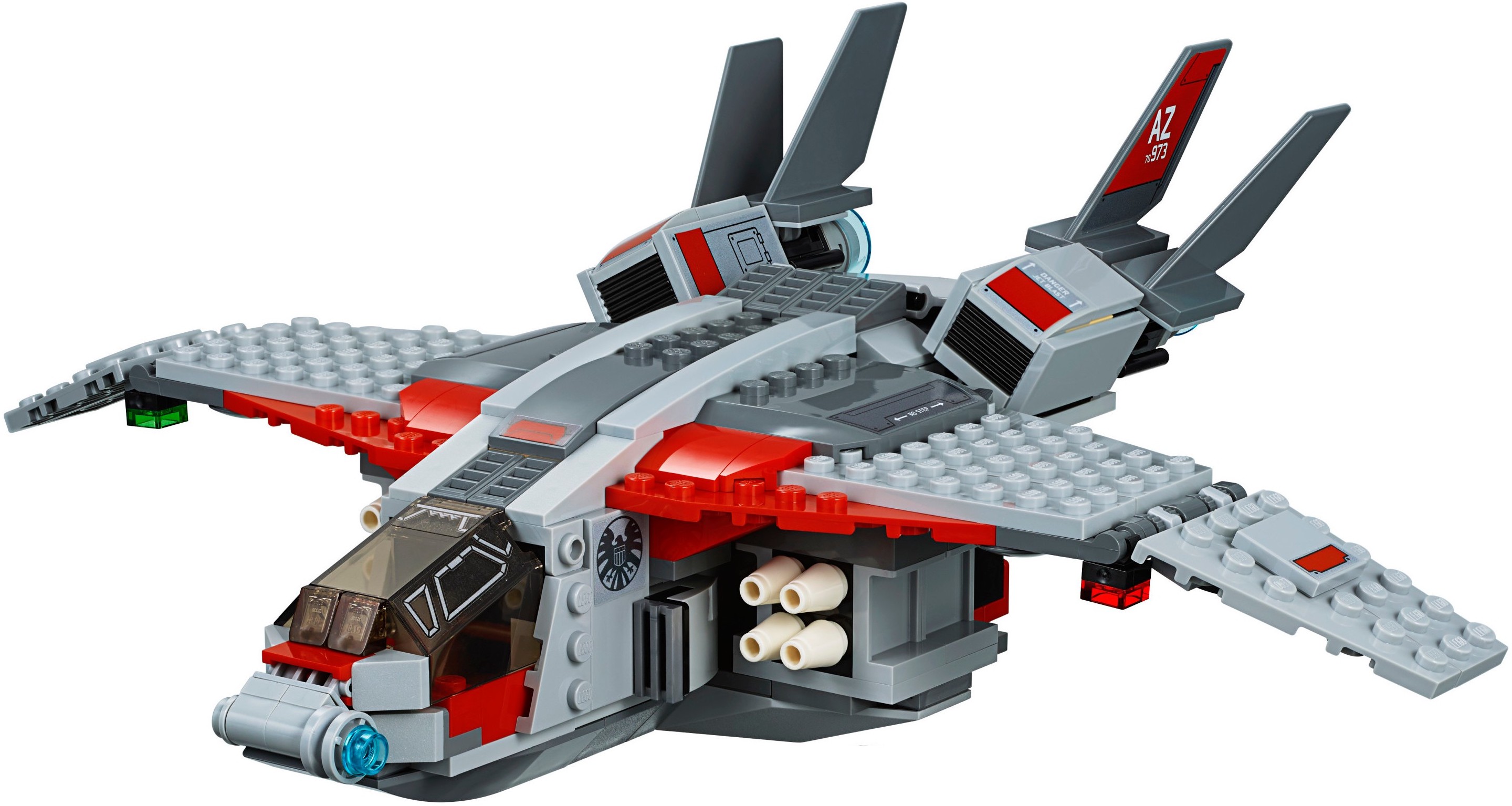 The build in the set is a 1980s-era Quinjet. This is easily the smallest LEGO Quinjet so far, but I think it actually looks quite good.

Despite its small size, certain details like the wing design, the engines, and the overall shaping definitely prove its Quinjet status. It has a light grey and red color scheme that looks nice and is definitely a change from the blue that we’re used to. There are several stickers but I think they look good, adding detail on the wings, the engine pods, and the cockpit. There are also a pair of stickers near the cockpit that have the S.H.I.E.L.D. logo.

One complaint I do have with it is that the wings look really studded. I don’t mind studs, but these wings are unusually studded without too much detail on the top. I don’t know if LEGO did this on purpose though – since Captain Marvel is set in the 80s, did LEGO do this to evoke a vintage LEGO feel? 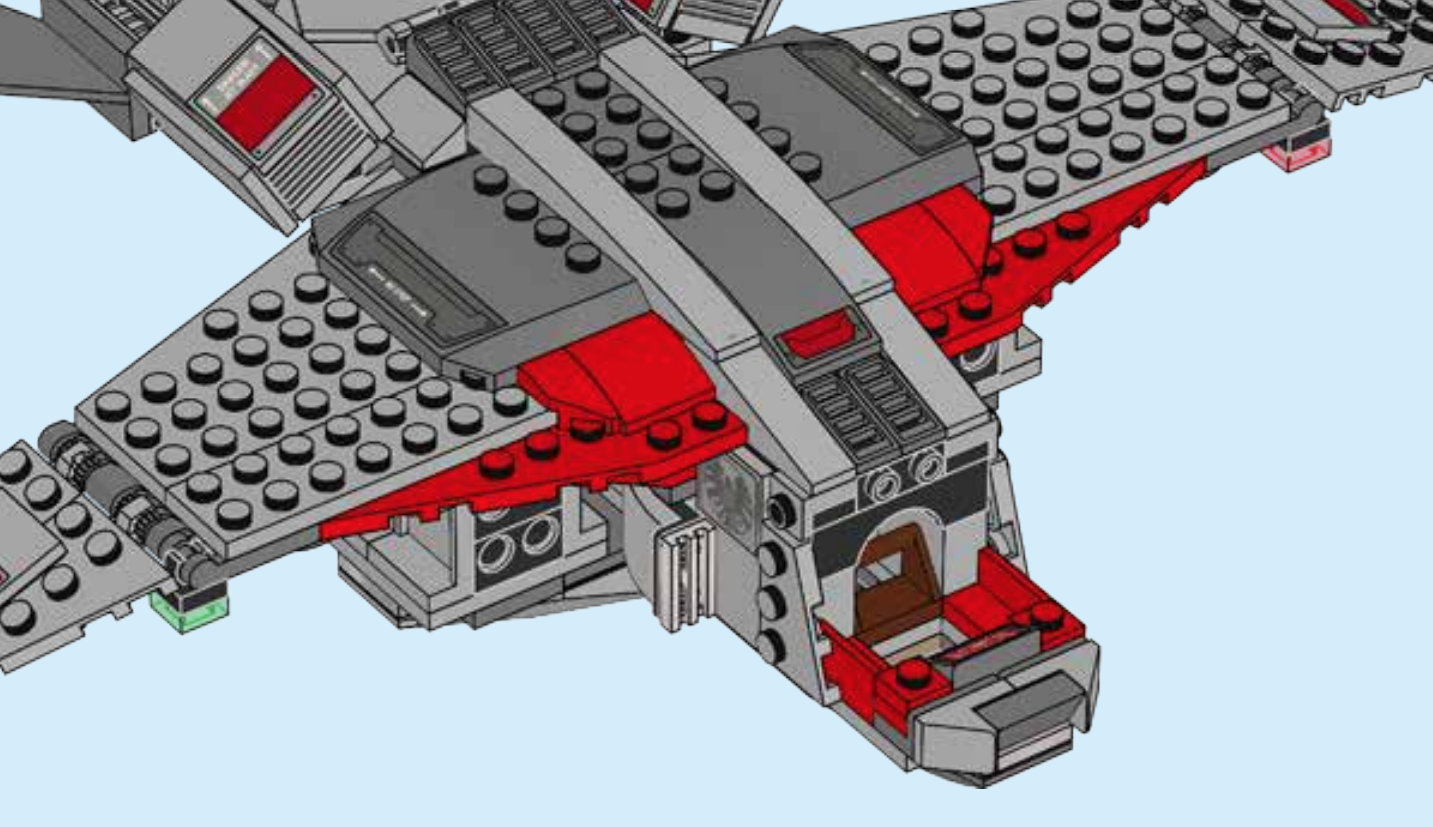 The cockpit glass has three stickers on it and can be detached. This gives access to the cockpit itself. Unfortunately, the cockpit is actually pretty tiny, with a very cramp space for one pilot. There’s a backrest and a stickered control slope, but that’s about it. Both Nick Fury and Captain Marvel can squeeze in here, but it’s especially tight for Captain Marvel due to her larger hairpiece. 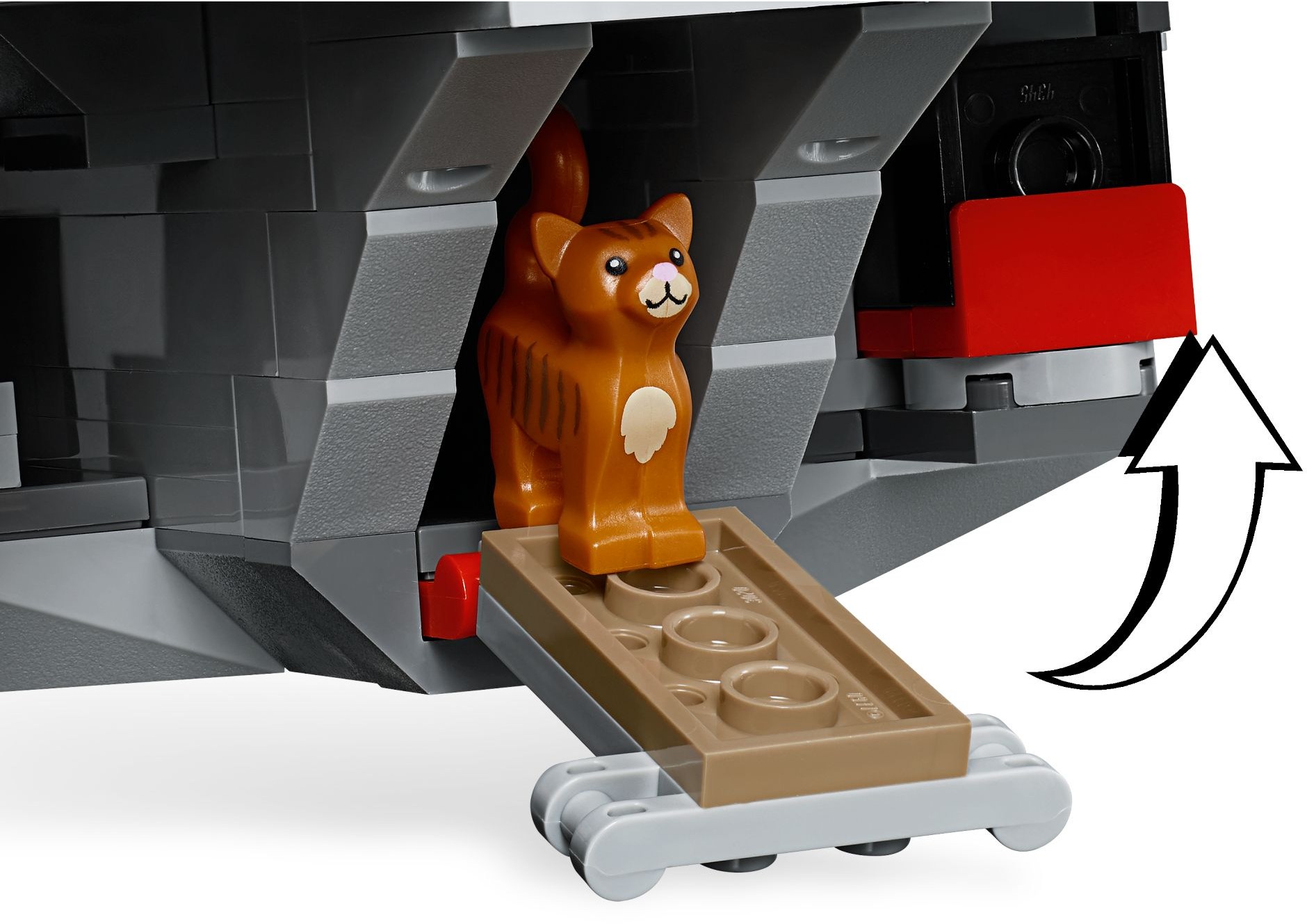 Swivel around to the back, and there’s actually a folding ramp at the back, just like the Quinjet’s larger siblings. However, this only opens up to a 2 stud-wide space that goes allllll the way down to the cockpit backrest. It’s basically a long, narrow hole.

You’re supposed to put Goose down here but she basically falls all the way down. She sometimes even gets stuck which is annoying if you try to take her out. Technically, you can fit Nick Fury in here, but he lies down at a weird angle so it’s not really supposed to be minifig-friendly. 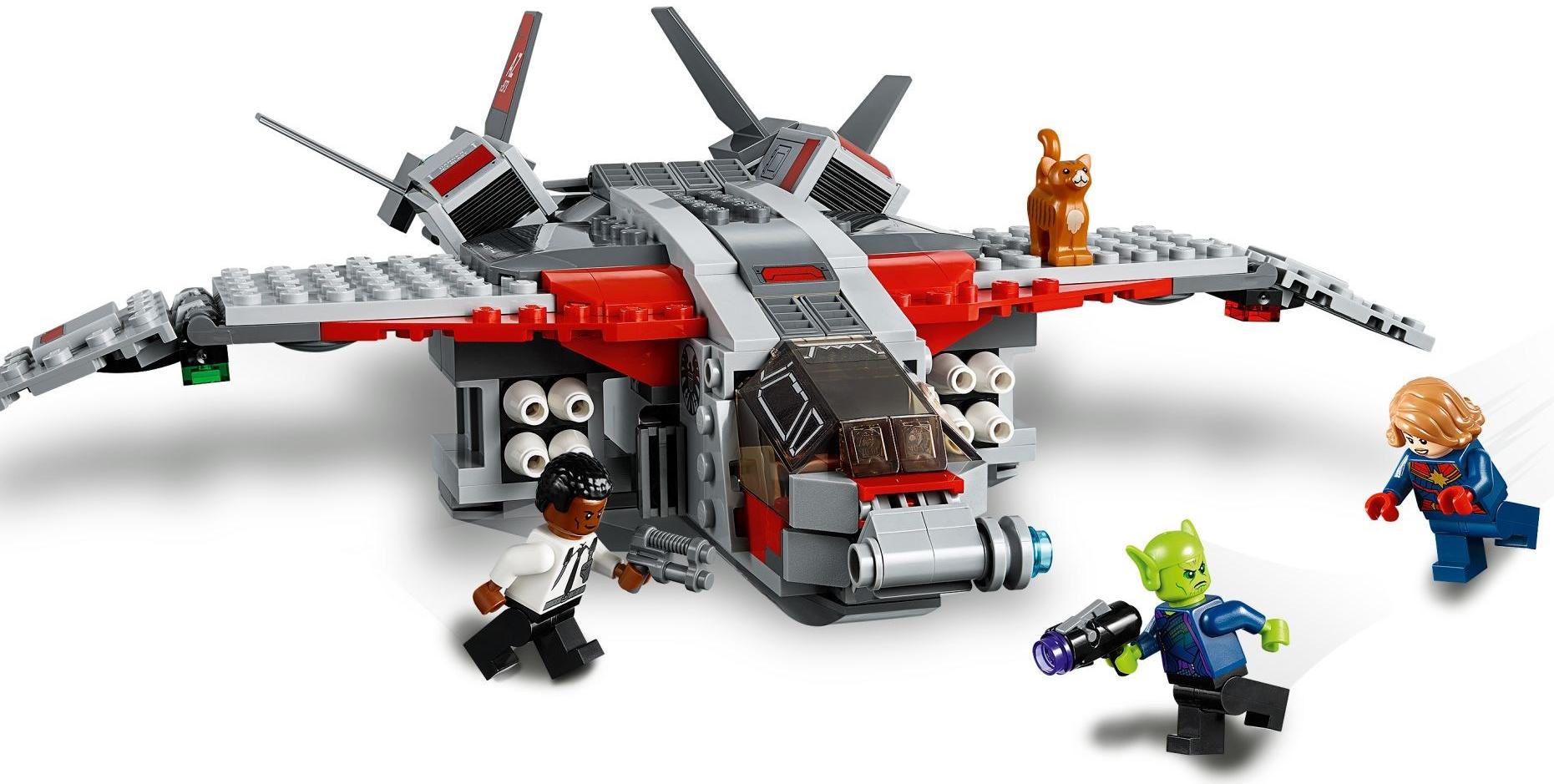 If you look at the Quinjet from a lower angle, you can see there are a pair of large missile pods – one on each wing. These are actually fitted with four flick-fire missiles each. 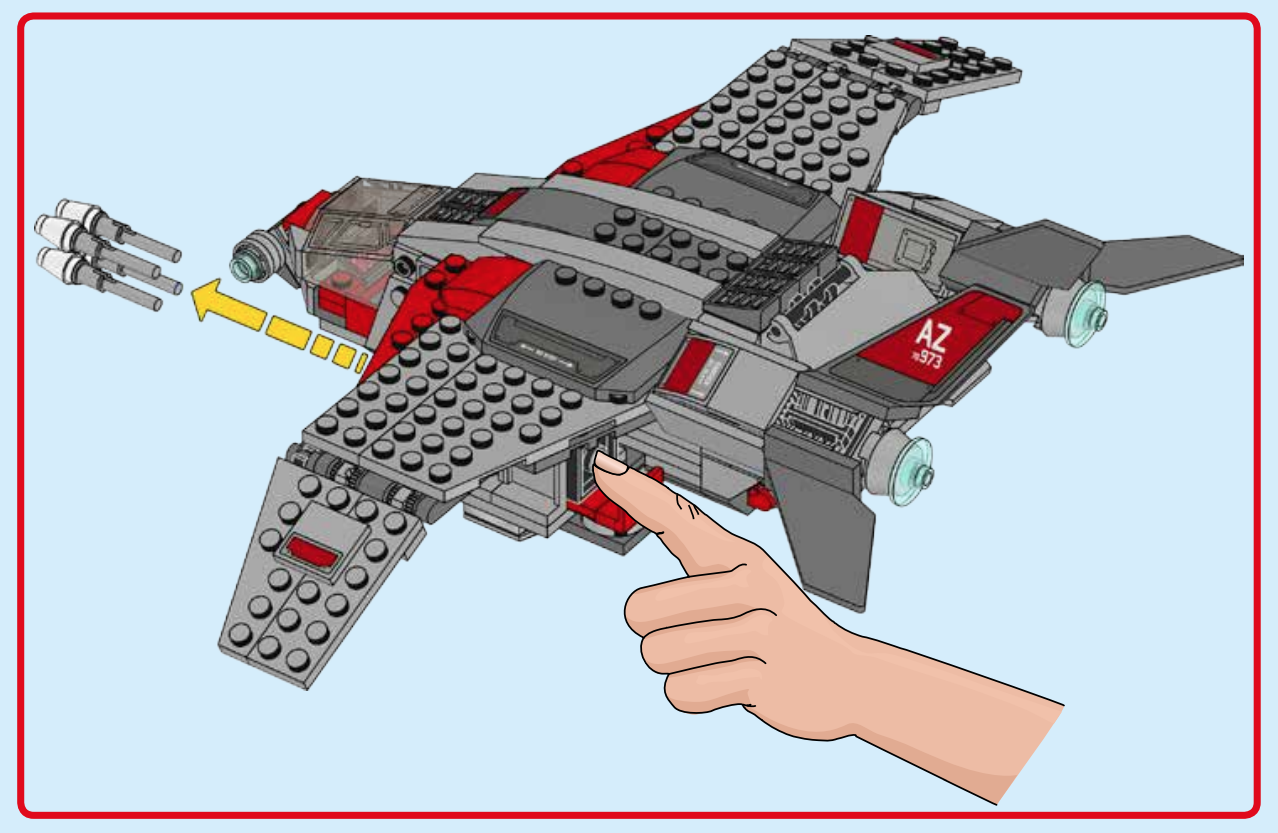 There’s a mailbox piece placed sideways on the back of either wing. Push on it, and it fires all four missiles at once. It’s alright I suppose, but I just don’t like flick-fire missiles. They’re weak and don’t fly far.

Overall, I think this set is alright, but not really a standout in my opinion. The build is good but a little bit small, and it’s a bit disappointing that there’s only one proper space for a minifigure. The minifigure selection is okay – the characters included are great but it’s sad and frustrating to see LEGO continue to skimp out on MCU minifigures. Hopefully that changes with Avengers: Endgame, as the leaked Quantum Realm suit prints look quite good, but I digress.

Playability is okay, since the set is alright to fly around and shoot with but there aren’t any special or innovative play features. The price, though, I believe is fine. The build is quite well sized and the 3-and-a-half minifigures included seems fair for a $30 USD set.

10 thoughts on “76127 Captain Marvel and the Skrull Attack Review!”