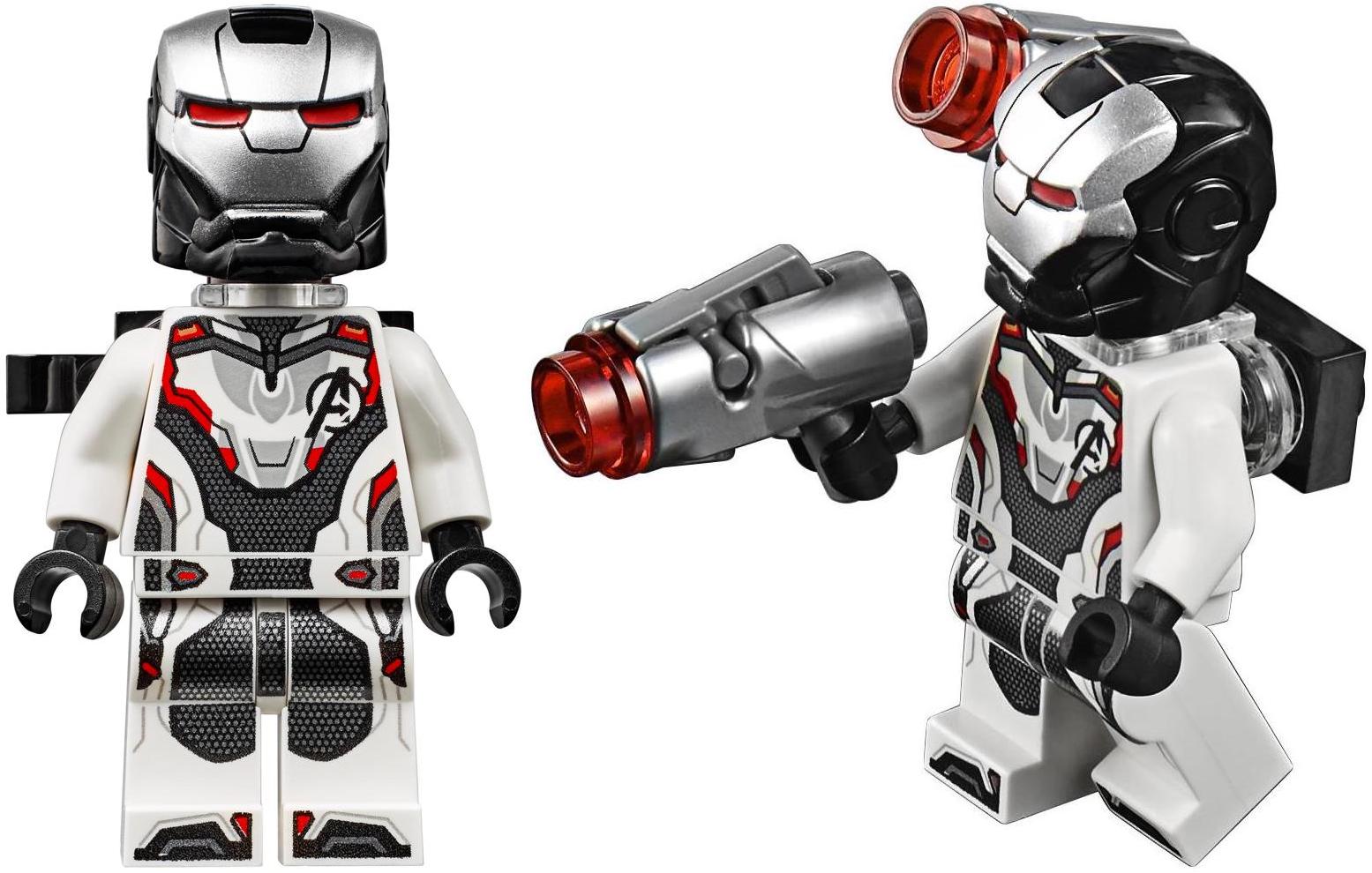 We start off by taking our look at our first Avengers Endgame minifigure – argh so exciting!! This is the new LEGO War Machine minifigure, and he definitely looks pretty different from his LEGO predecessors. War Machine has a new print for his helmet, with the silver faceplate ending higher up and a new print on the faceplate. Underneath the helmet, War Machine has the same head that he did in the Bricktober pack, with a smile on one side and a red HUD on the other. He has a neck attachment with a clip at the back for his shoulder-mounted gun, and he debuts the new LEGO Avengers Endgame white Avengers suit! This suit is pretty darn detailed, with torso, hip, leg, and toe printing! I do like this suit and I think it’s great, however War Machine has a different white suit in the movie than the other Avengers, and I think that should have been reflected here, whether it was a new armor mold or at least a different print. War Machine comes with two silver stud shooters – he can hold one and clip the other one on his right shoulder.

It would also have been nice to get Rhodes’ new Mark V War Machine suit in this set, but oh well. 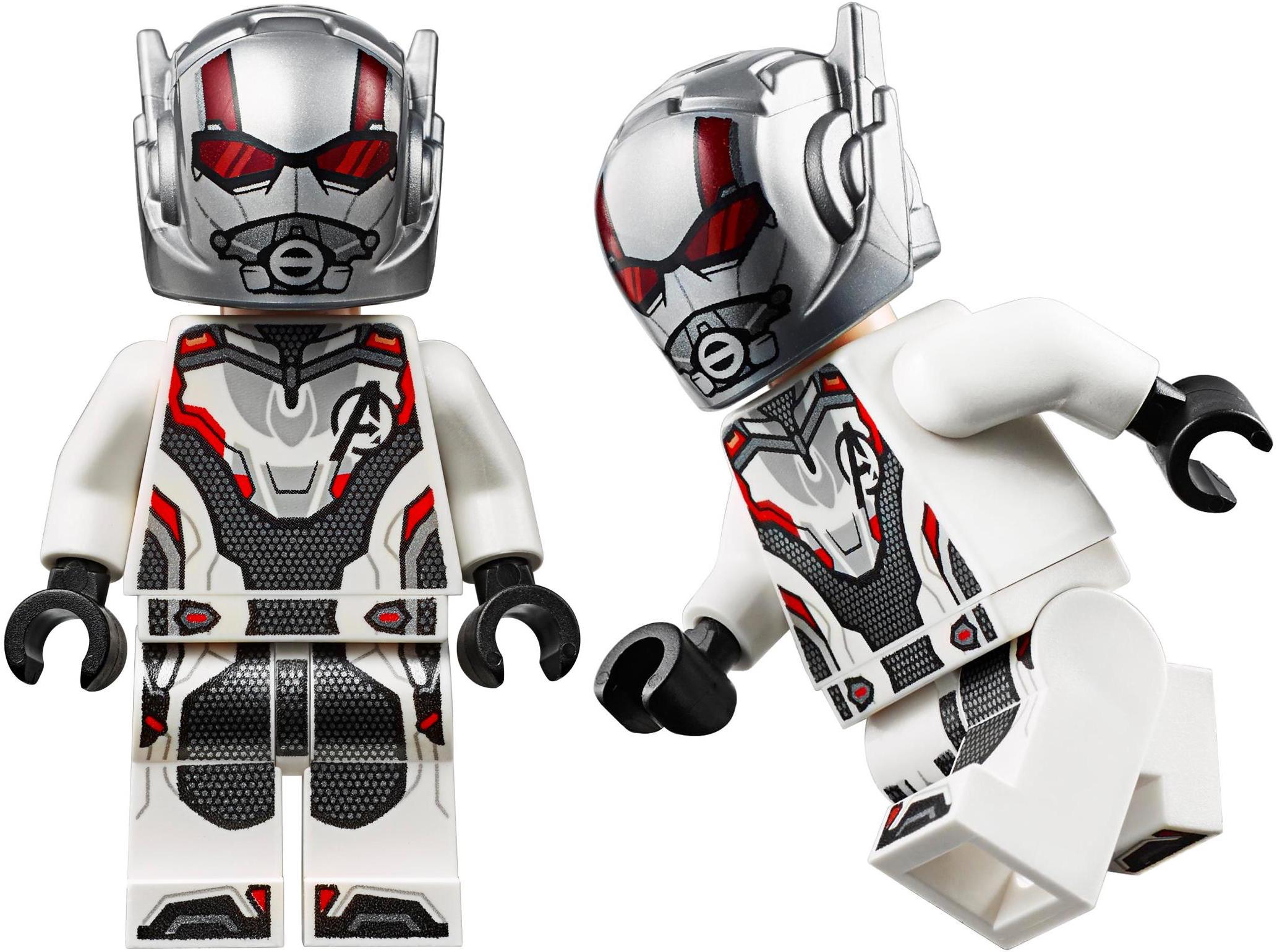 The next minifigure is Ant-Man, and wow this guy is interesting! He sports the same white suit as War Machine (and a bunch of other Avengers) but I don’t mind too much as his regular torso and legs just appeared in a recent set. However, the most interesting part about him is his new helmet! Ant-Man’s old helmet, while it looked good, was inaccurate, and this new Ant-Man helmet repurposes the LEGO Firefly helmet in silver with new printing! I think it looks quite good overall and it’s definitely better than the terrible Wasp helmet from last year, but I do feel that the lack of texture on the front is a bit disappointing. Ant-Man has the same double-sided head he’s had since last year, and also comes with a dark brown hairpiece. 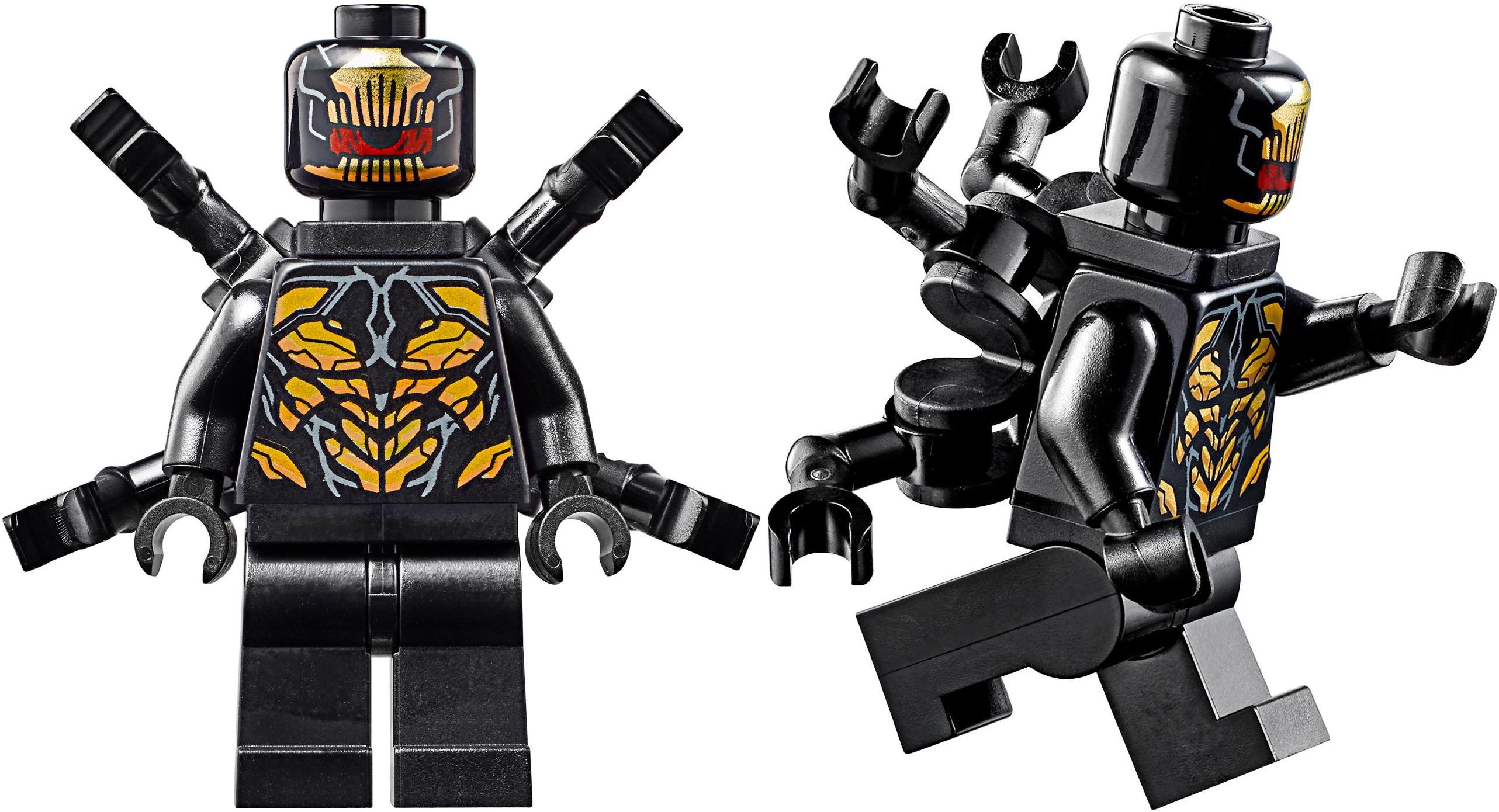 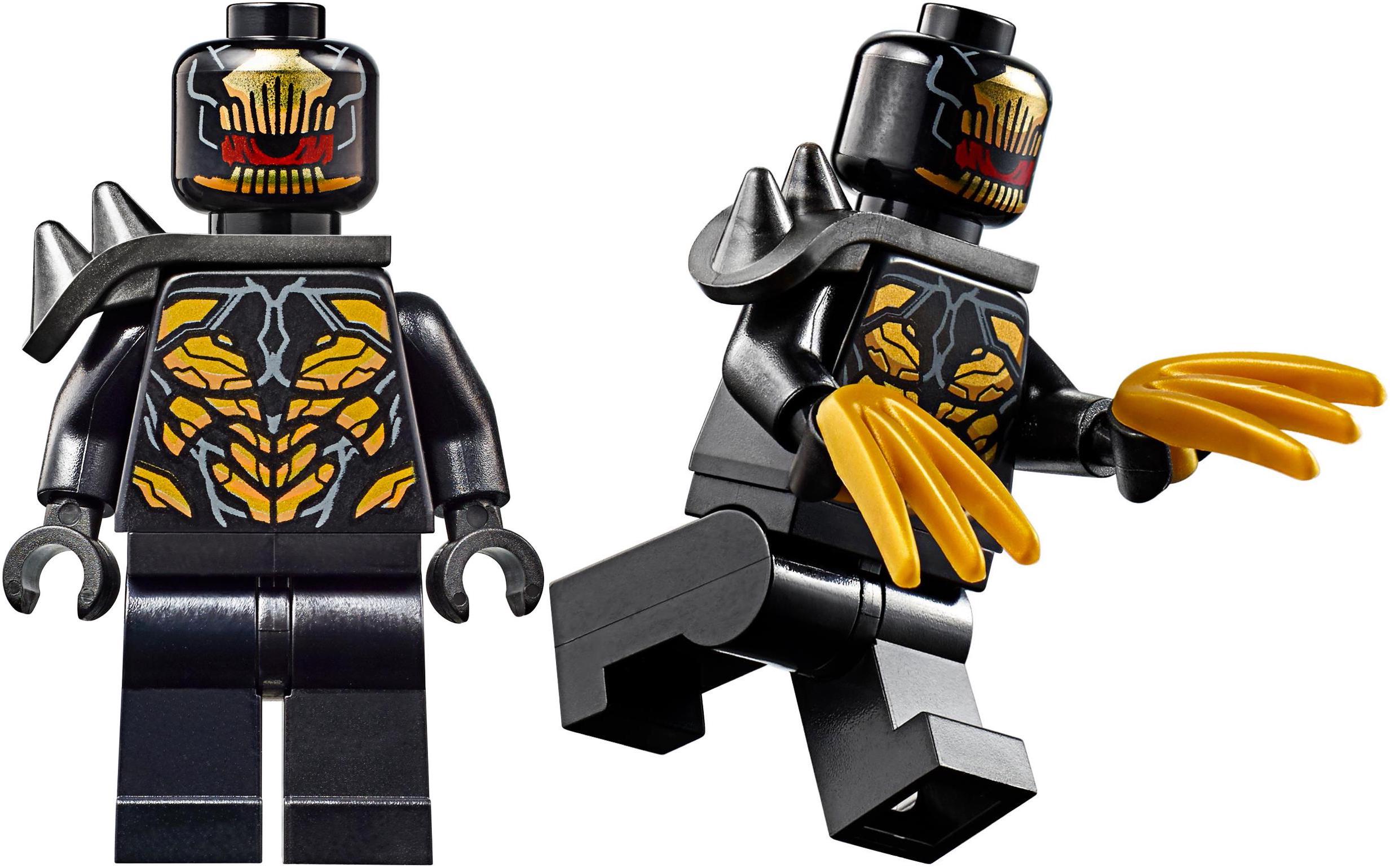 The final minifigure is another Outrider, but this one is upgraded! It has the same face print, torso print, and unprinted legs as the regular Outrider, but has a couple of additions. Instead of the four-arm neck attachment, this Outrider gets a gunmetal grey spiked shoulder armor attachment that first appeared in The LEGO Movie 2 sets. It also has two golden “Wolverine” claws as accessories. It’s certainly interesting but I personally prefer the regular Outriders, and would rather have gotten one of the horned Outriders (which we’ve never gotten in LEGO form). 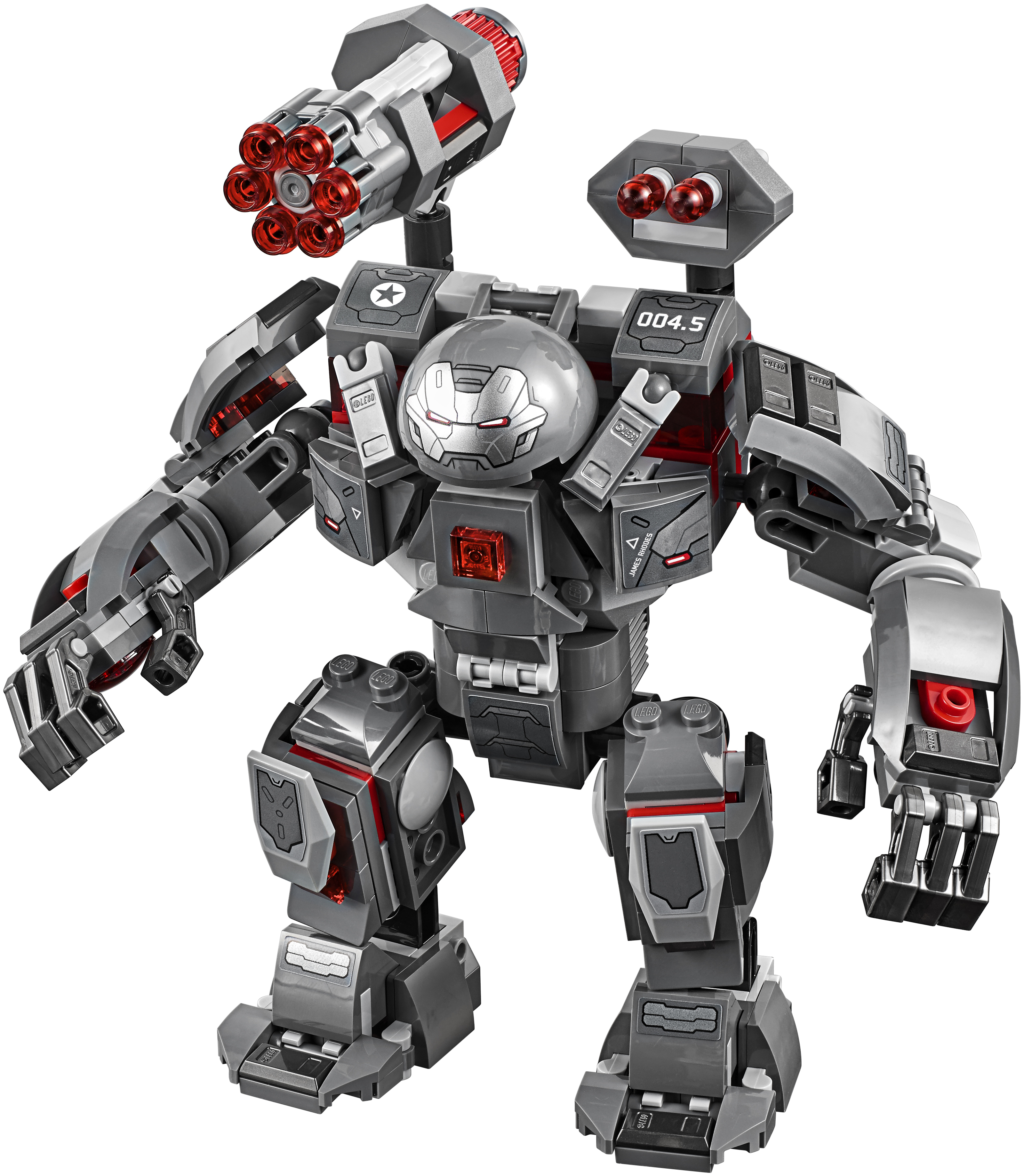 Now on to the build of the set. There’s only one – the War Machine Buster itself. It’s basically a dark grey version of the Hulkbuster, piloted by War Machine and sporting his colors. This build has a similar size and outward appearance as the Infinity War Hulkbuster, but the build process itself had enough differences to stay entertaining. 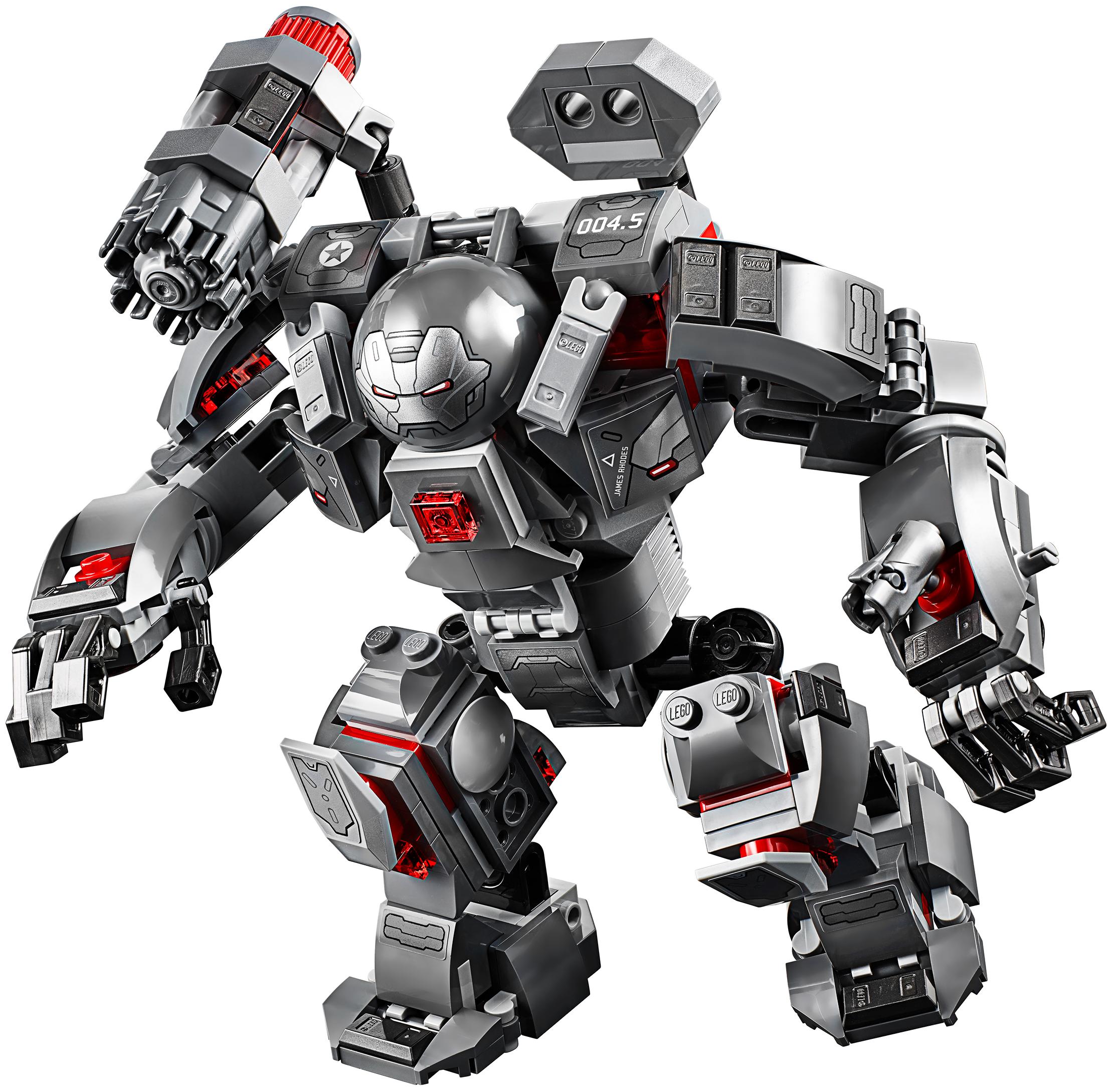 The War Machine Buster itself is quite poseable, but not as much as the Hulkbuster. IT has ratcheted joints at the hips and ball jointed feet (unchanged from the Hulkbuster), ball joints at the shoulder (unchanged), but strangely the forearms are only able to rotate sideways and are permanently stuck at a 90º angle. It restricts poseability and is fairly disappointing. 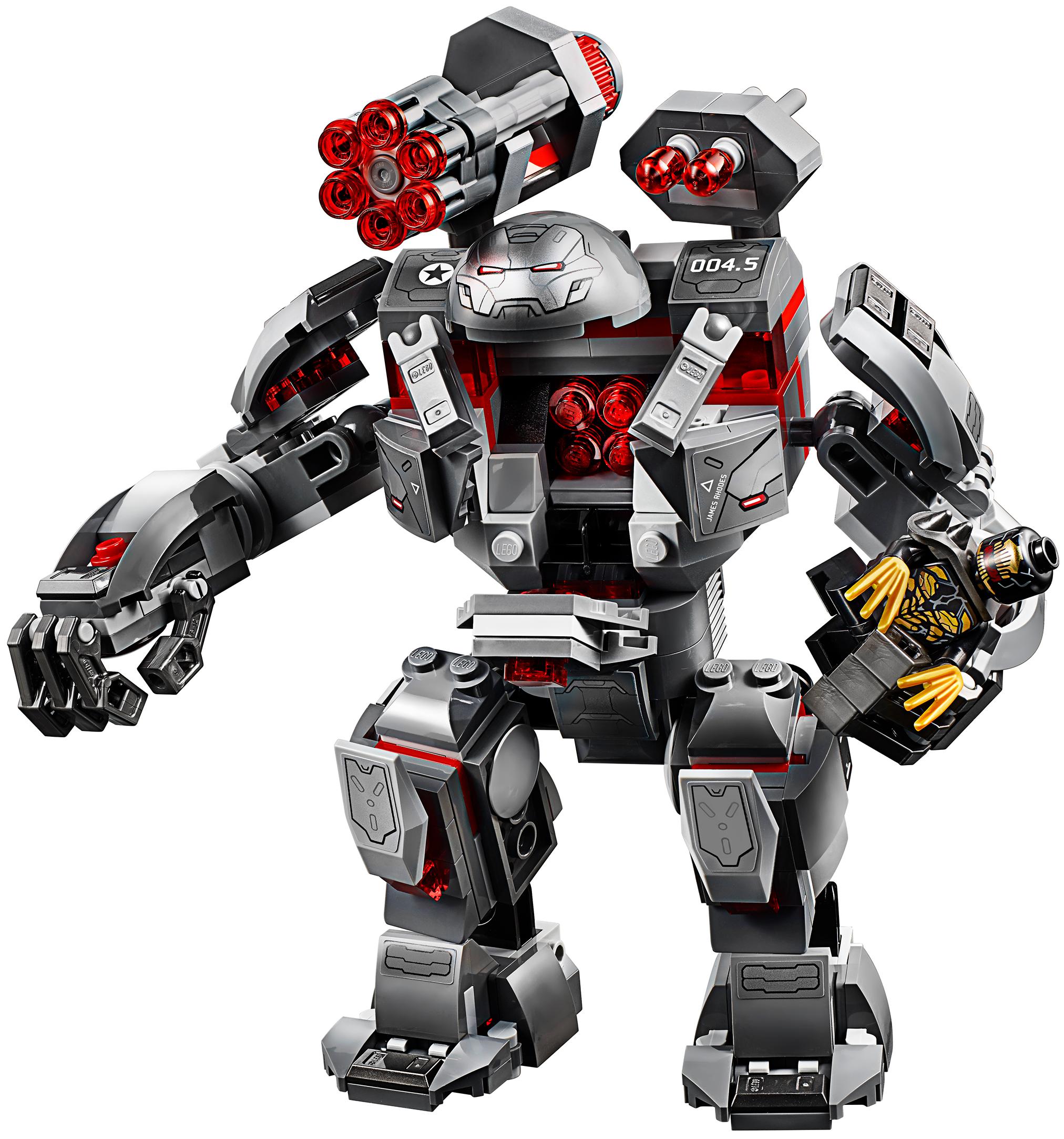 The War Machine Buster has a printed dome head that folds back, and a front panel which folds forward. This area is built fairly differently from the Hulkbuster, with a different opening method. War Machine fits inside, but you have to remove his stud shooters. I like the angled designs on the front panel, along with the two ball jointed segments flanking the dome head. There are also stickers used to good effect.

There’s a 2×2 inverted tile with four stacks of translucent red ammo for the stud shooters. This can be fitted behind War Machine inside the War Machine Buster. 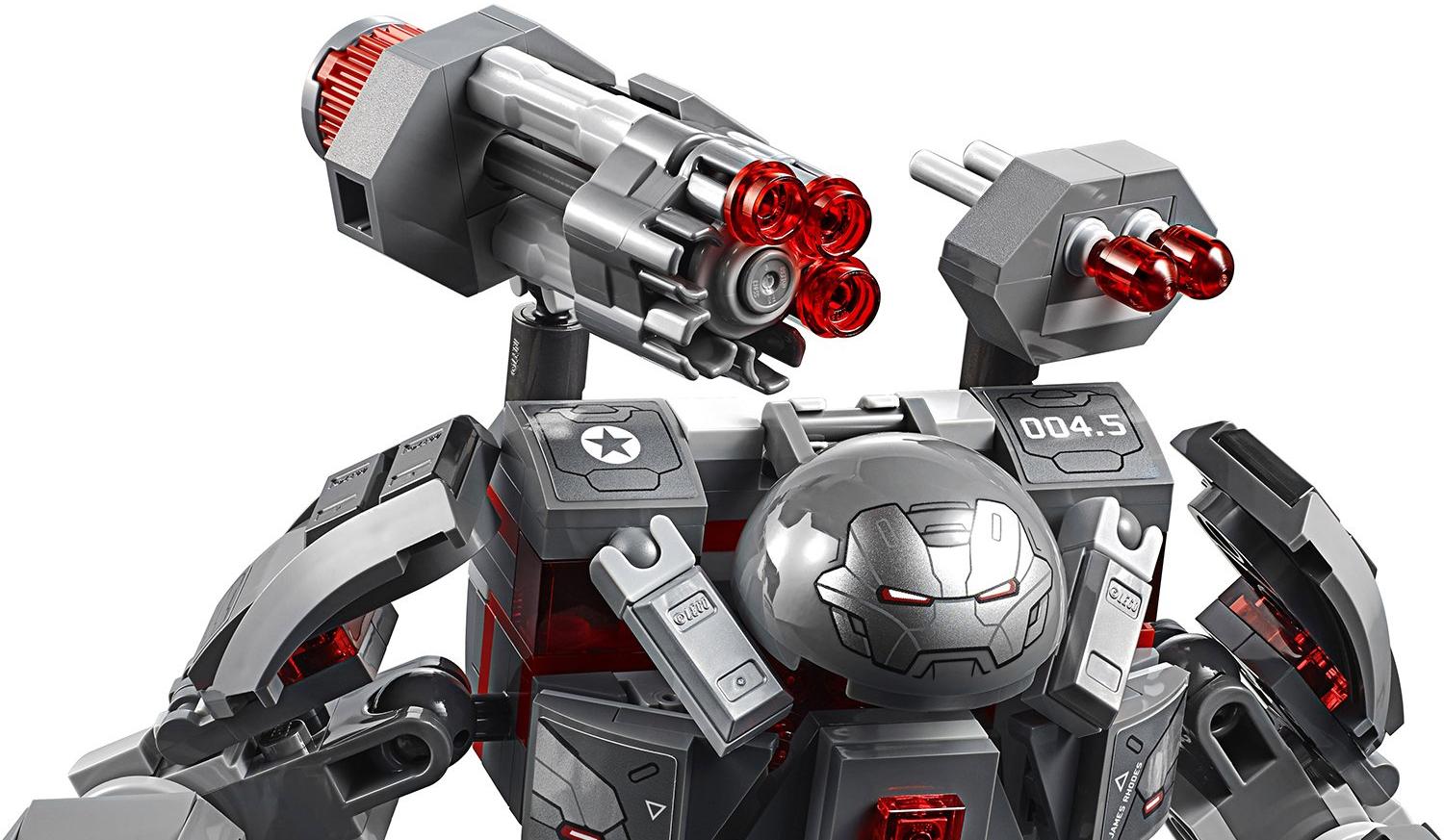 On the right shoulder of the War Machine Buster is this giant rapid stud shooter cannon. This is similar to War Machine’s large right shoulder-mounted cannon. This cannon can rotate and is mounted on a mini ball joint. You can turn the red knob at the back which fires off a barrage of six translucent red studs. I think this is pretty fun and it looks good. 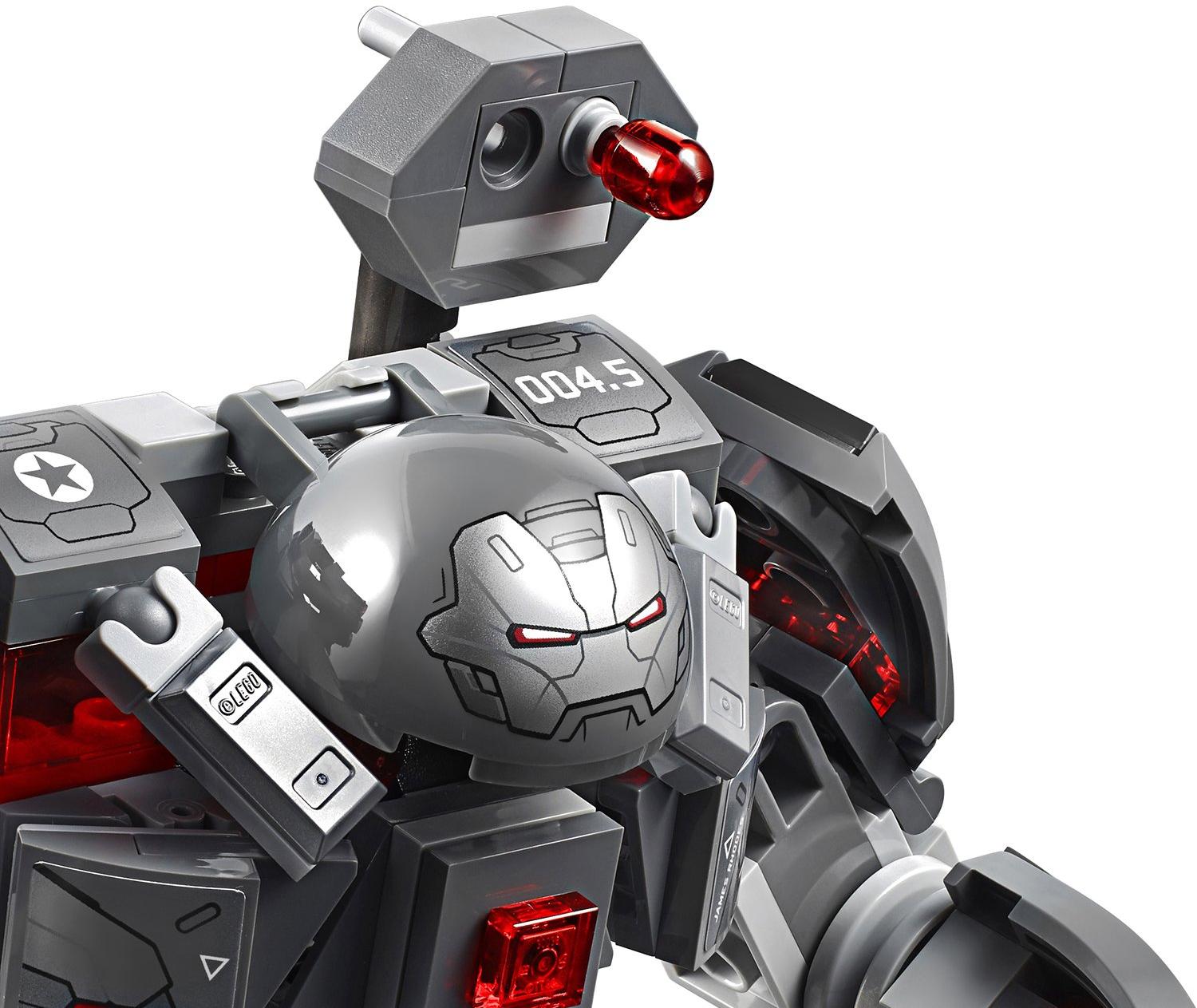 The other shoulder has a smaller cannon. This one has a pair of flick-fire missiles with translucent red tips that can be fired off. It’s also mounted on a mini ball joint. I think the flick-fire missiles look fine but I feel like spring-loaded shooters are much more powerful and are better LEGO armaments overall, though they might have looked a bit too ugly here. 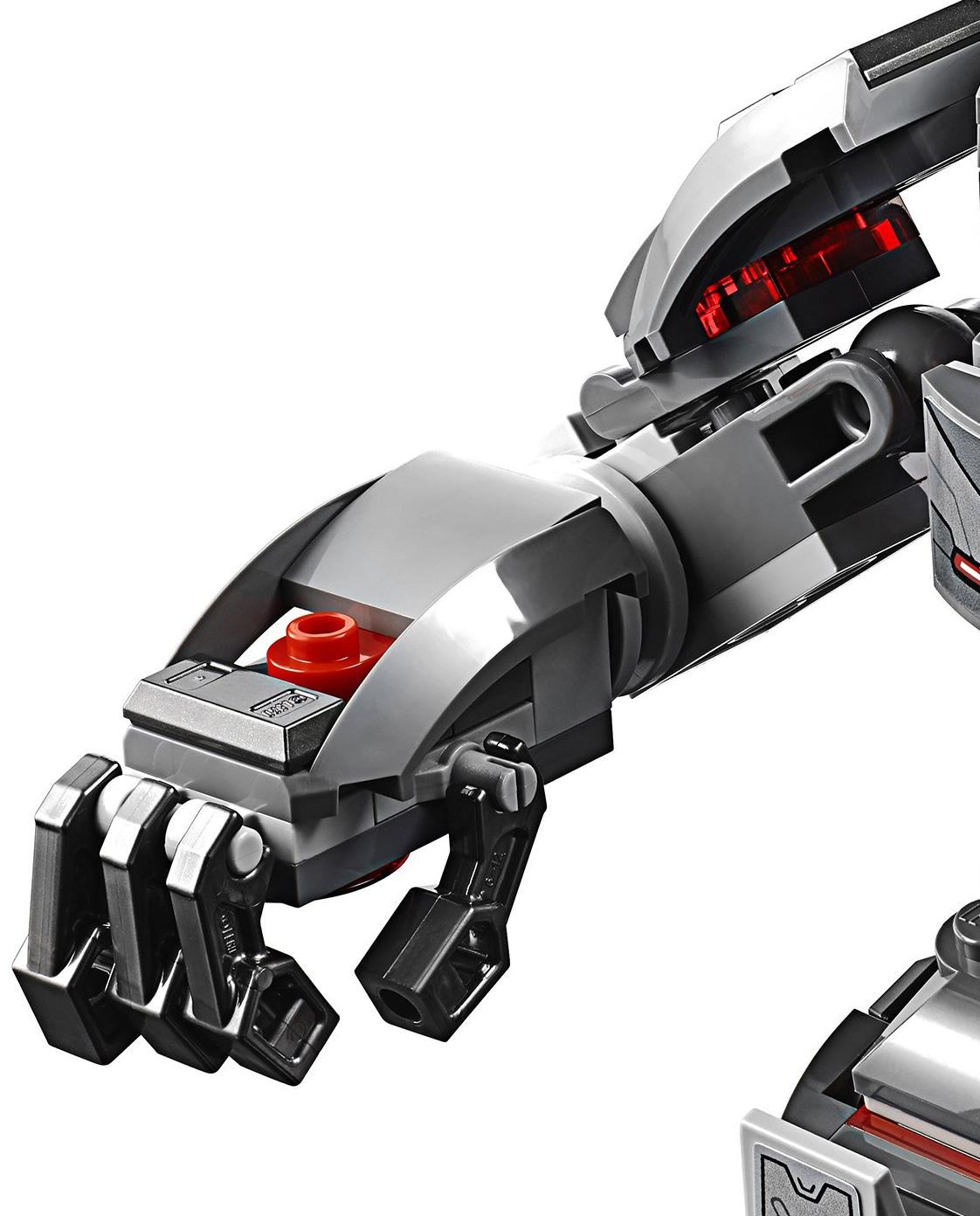 The War Machine Buster has poseable fingers on its hand. Unlike the previous Hulkbuster, this hand can grab minifigures a bit better. There’s also a hollow red stud – this is where you store War Machine’s silver handheld stud shooters when he’s inside the War Machine Buster. This turns them into wrist cannons! 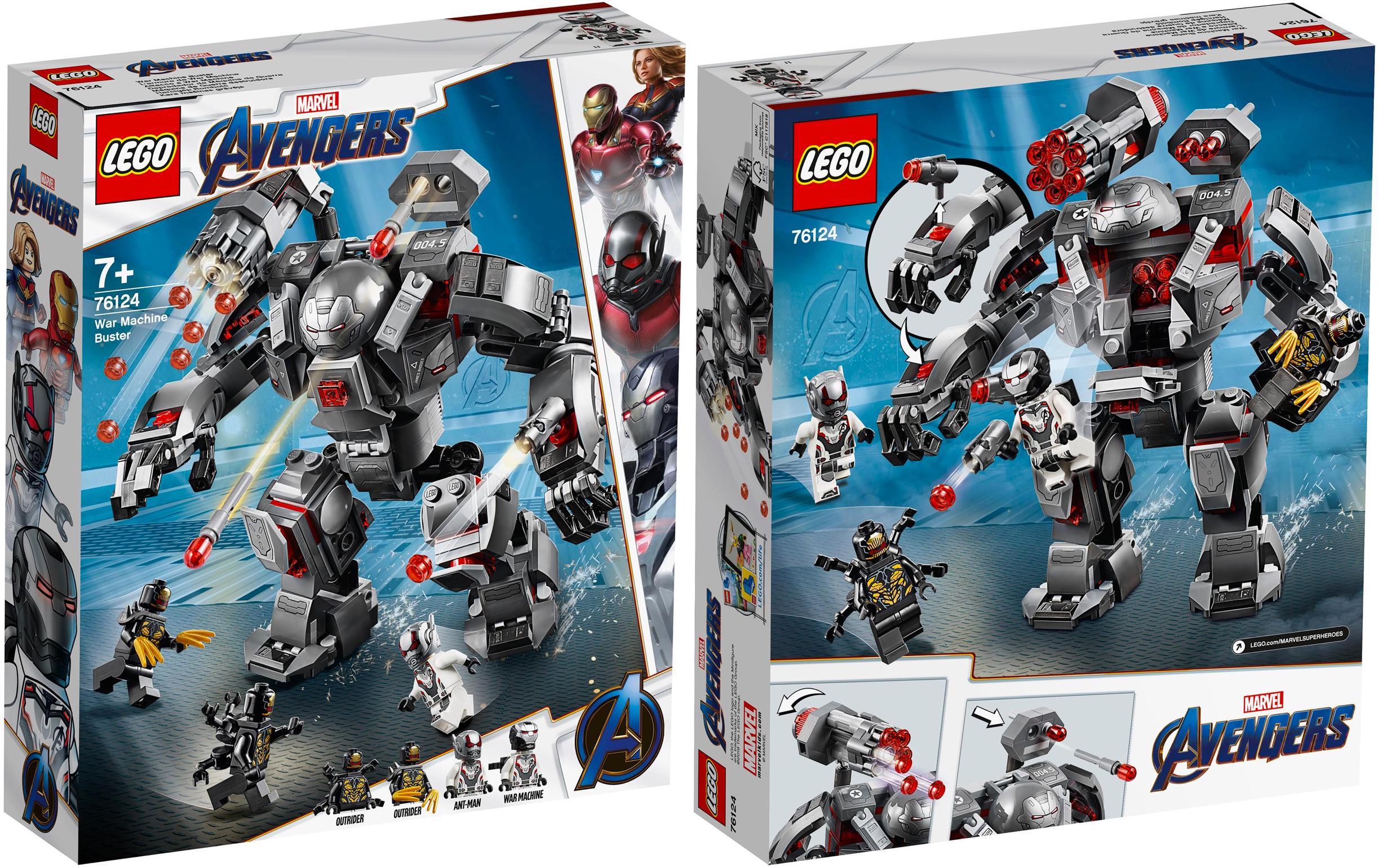 That’s it for my first review of a LEGO Avengers Endgame set! I think this set is quite good on the whole, but not amazing. The build is pretty great, though it loses a bit of the novelty due to the similarities with the 2018 Hulkbuster. The minifigure selection is fine, and playability is alright (it would have been good to get a side build for the Outriders so that War Machien could destroy it). The price is also a little bit high, as I personally find the build isn’t that big to justify it. However, I still think this is a good set on the whole and I would recommend it.

Thanks for reading! Let me know your thoughts in the comments section down below, and be sure to grab your Avengers Endgame tickets – available now!

When commenting, I kindly ask you to please follow the rules as outlined in my Avengers Endgame Spoiler Policy.