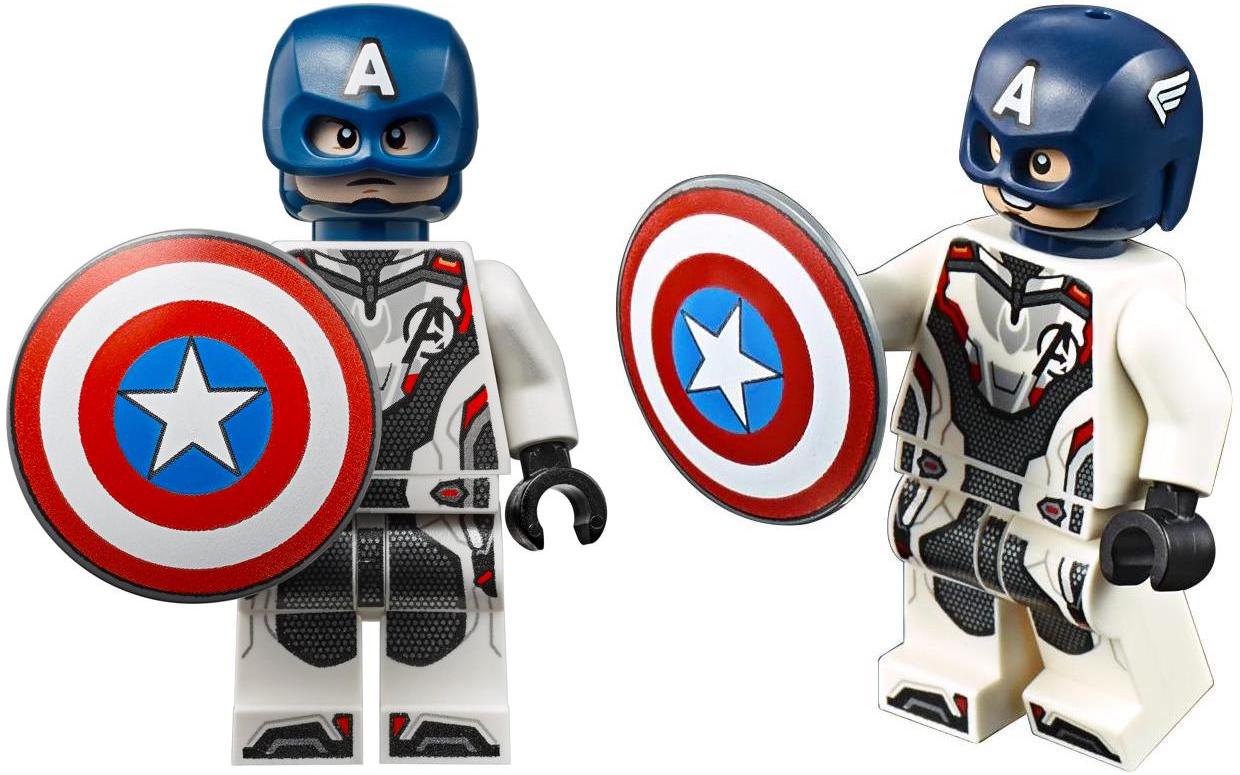 The first minifigure in the set, and easily the best figure, is Captain America in his new white Avengers suit. His Avengers suit is the same as most of the other Avengers in the new LEGO Endgame sets. It has detailed printing on the torso, hips, legs, and toes, and it does look pretty darn solid. However, it is not really uncommon and appears in four other sets (one of which is a polybag) so it’s not that amazing, and it would have been nice to get Cap’s new scaled suit from Avengers Endgame. However, the most exciting part of this figure is his new helmet. LEGO Captain America gets a molded helmet for the first time in history and it looks pretty great, with suitable printed details and molded eye holes. It covers the back of the head which looks a little bit odd but I think it’s reasonable and I don’t mind it. Captain America has a double-sided head printed onto a dark blue head, and unfortunately the opacity of printing on his head is a bit lacking, resulting in a whiteish skin tone. Captain America has a new shield piece, which has the classic America logo printed onto a light grey base. Despite the reuse of the white suit, I think this figure is a good one overall. 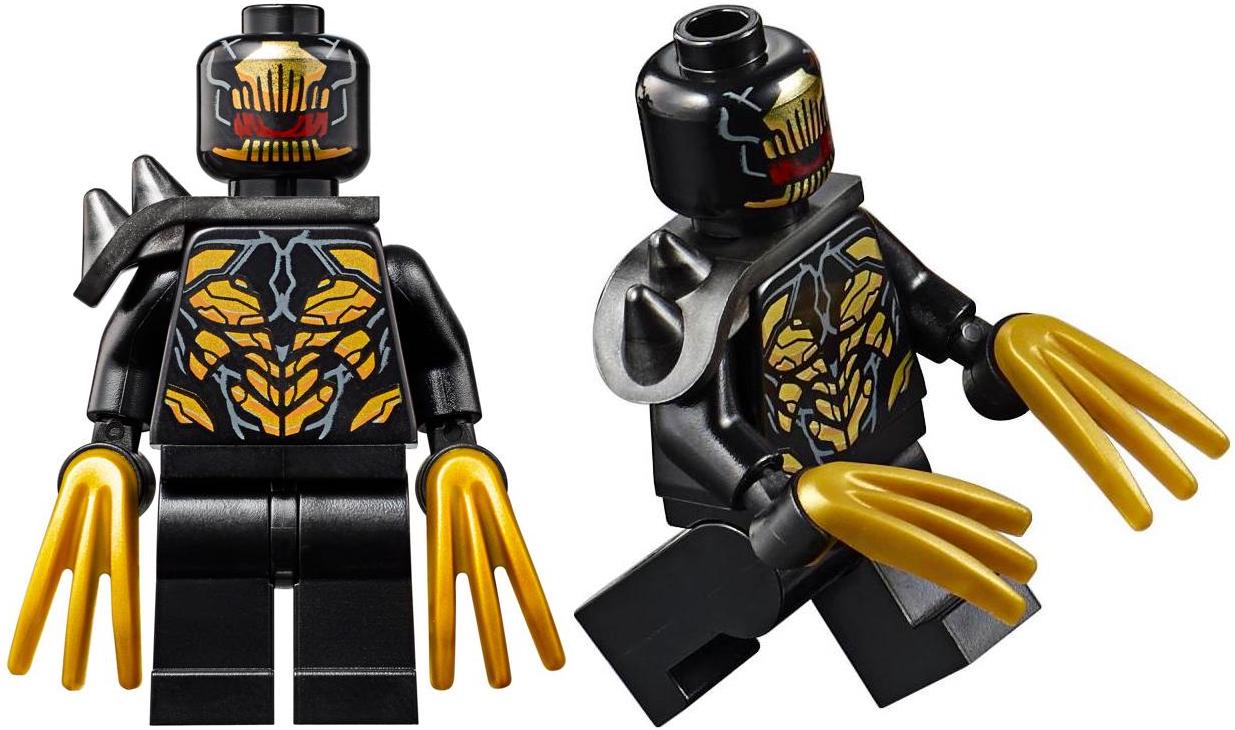 Next up is an Armored Outrider. This Outrider has the same printed head, printed torso, and unprinted legs as the generic Outriders from the Infinity War sets, but instead of the four extra arms he has a gunmetal grey shoulder armor piece and two golden claws. This figure also appears in 76124 War Machine Buster.

Finally, the set includes two six-armed Outriders. These have the same core Outrider minifigure as the ones from infinity War and they reuse the same neck bracket piece, but their arms have been upgraded to now feature golden Wolverine claw pieces. It’s an interesting upgrade and I do like the added gold color, but I personally still prefer the old, smaller arms to these big ones. The use of the robot arm pieces on the back make them look kind of mechanical and not organic.

On the whole, I think the minifigure selection is alright. Captain America’s new helmet is a huge, huge draw – especially since we might never get another MCU Captain America minifigure again – but three generic Outriders and the reused Avengers suit is a little bit disappointing. Four minifigures in a set of this size is good, but given that three of them are near-identiical, generic figures that appeared in a previous set wave, I think this minifigure selection could have been improved. 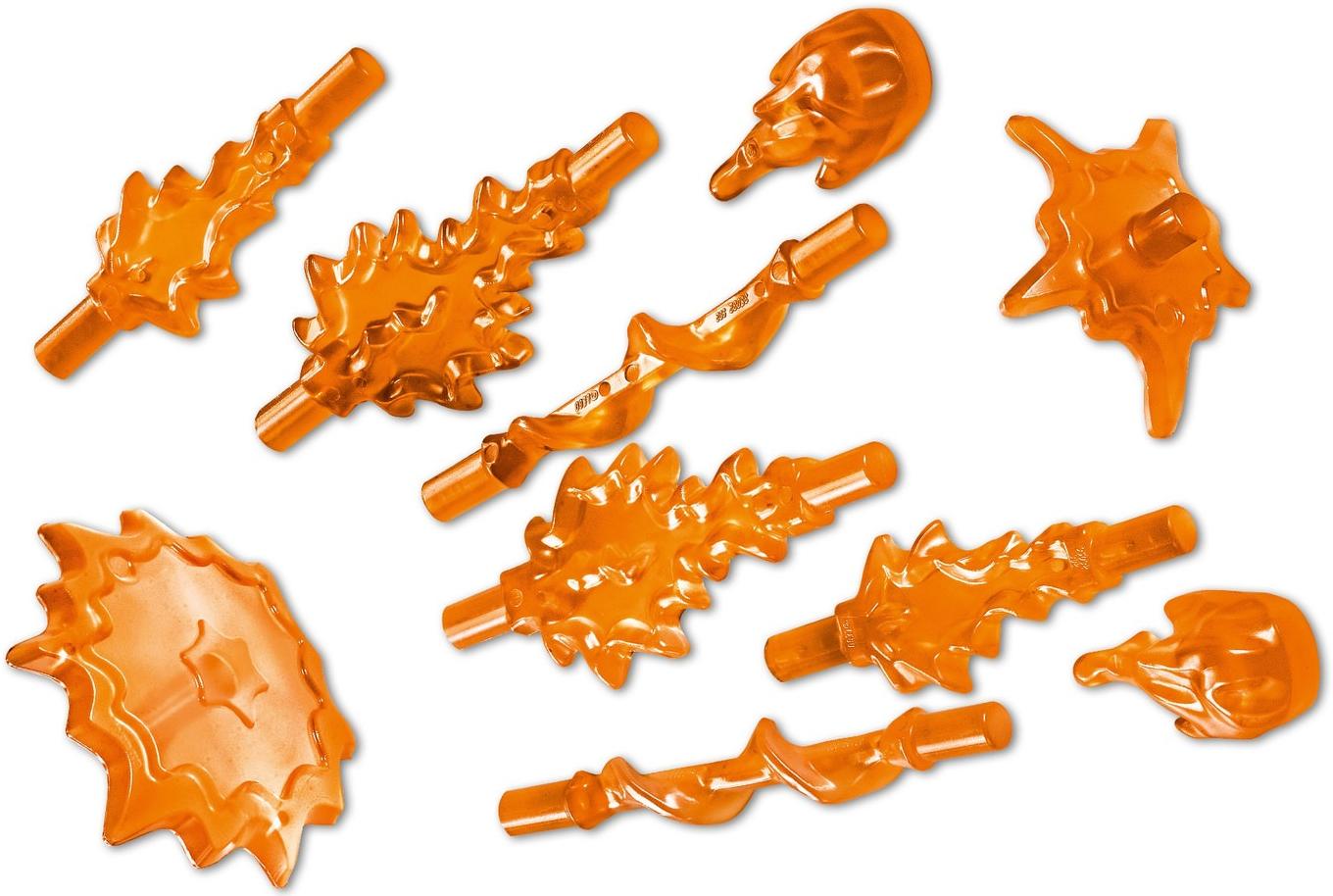 The set also includes one pack of the translucent orange Power Burst pieces. These are used to embellish the included motorcycle, and I believe this is currently the smallest set to include these pieces in trans orange. 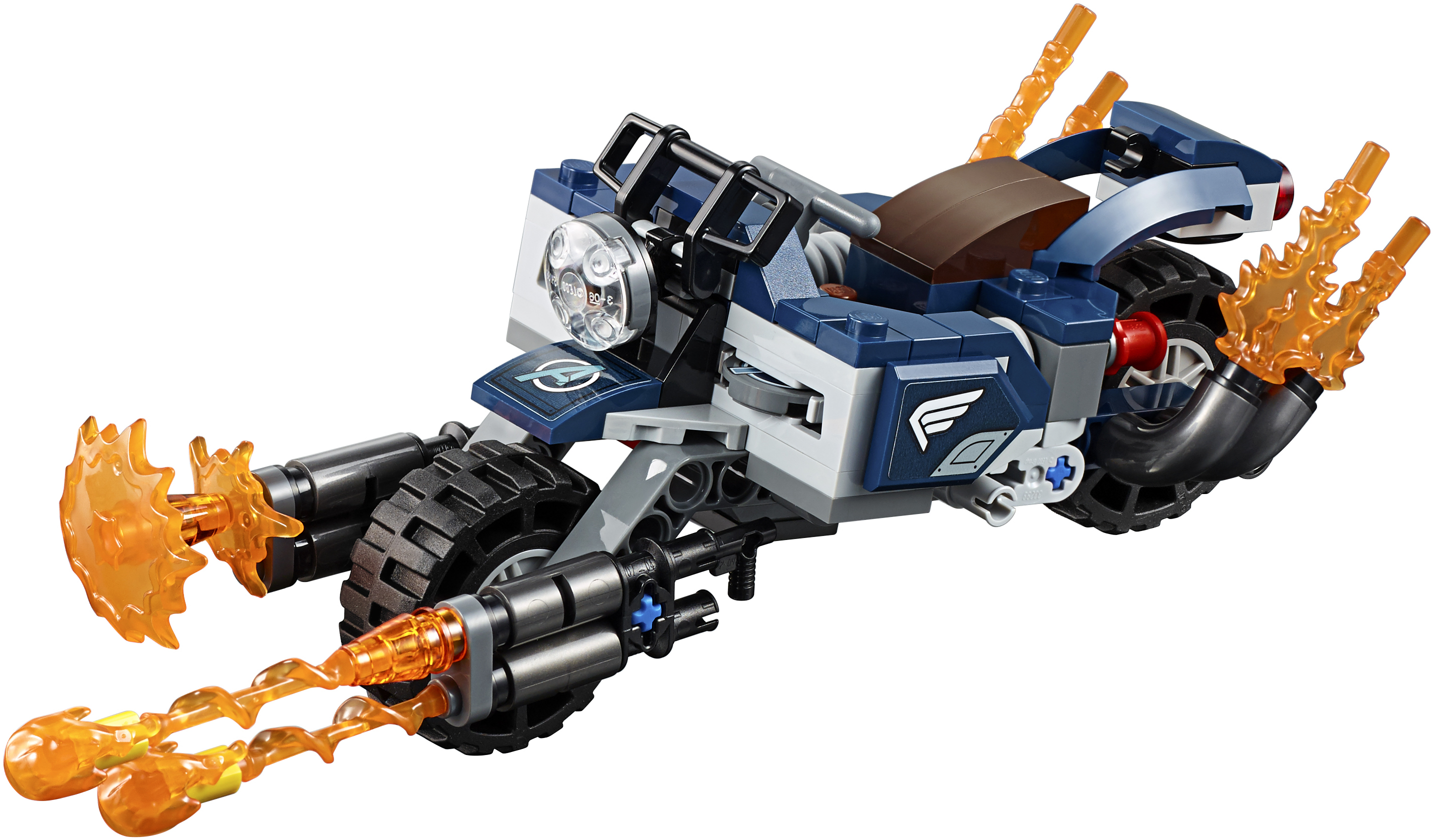 Now, let’s move on to the only build in the set – Captain America’s motorcycle. Man, it feels like LEGO needs to include one giant motorcycle in almost every wave. Despite being crazily oversized for a minifigure, it’s somehow not that big. It measures around 20 cm long but the Power Bursts really make it longer than it really is. It also doesn’t use too many pieces. 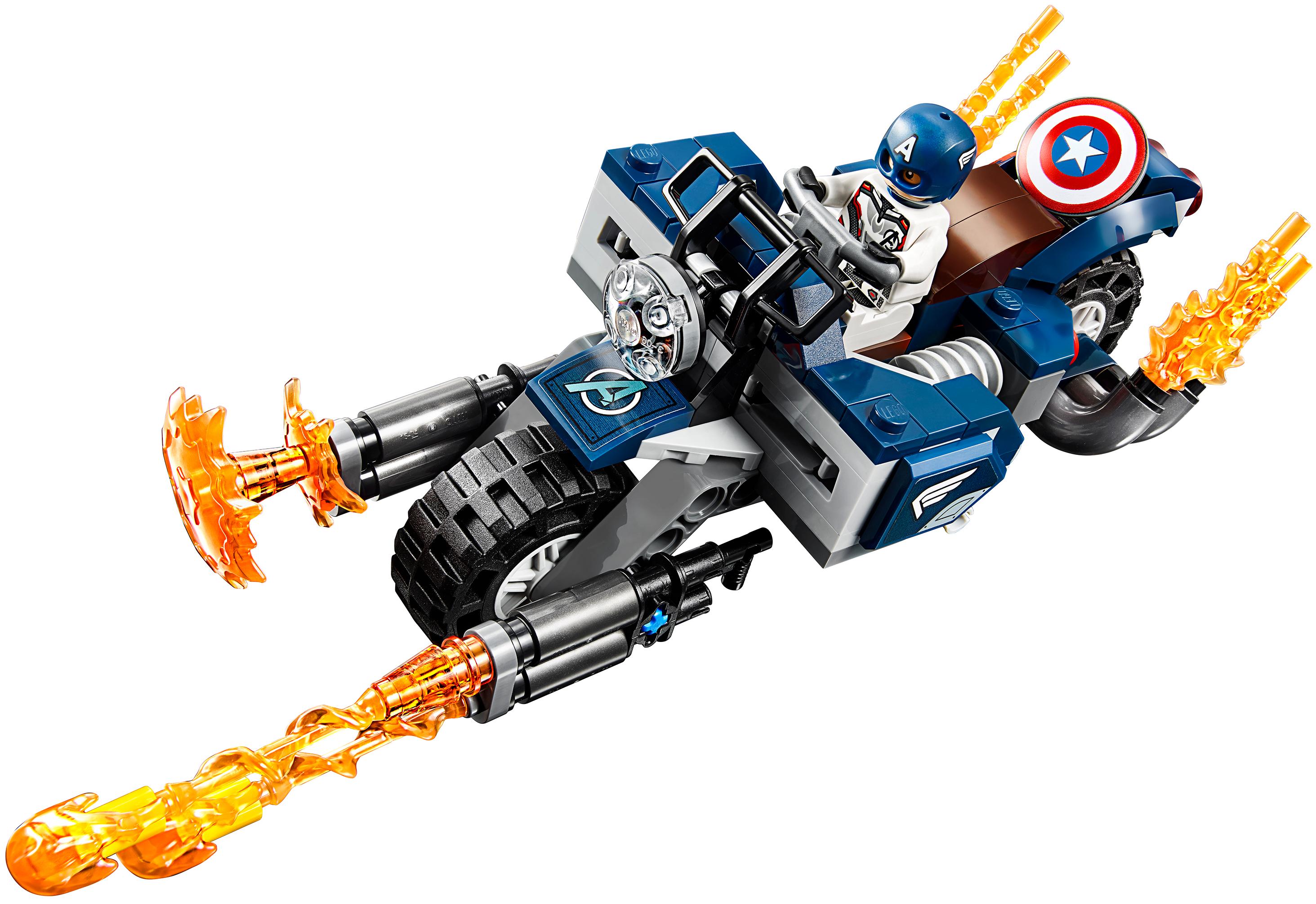 Captain America can be placed in the bike and you can just see how it absolutely dwarfs him. He gets a large brown seat with two studs, and he has a handlebar piece for him to drive. He also has a clip at the back on the rear mudguard to attach his shield. A couple of stickers are included for embellishment, and there’s a brick-built flashlight in front of the driver. 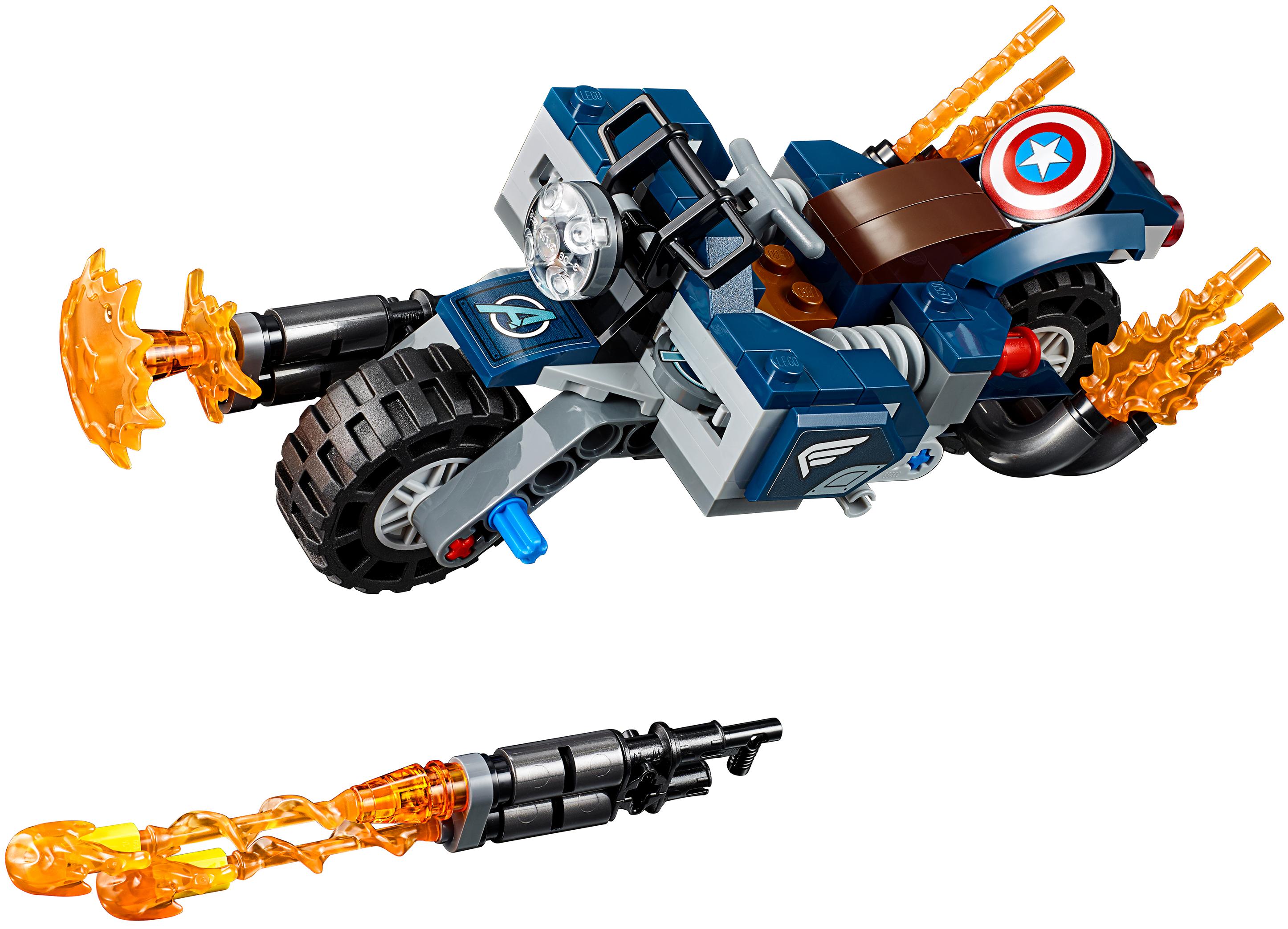 The trans orange Power Burst pieces are used on the bike – as flamethrowers at the front and exhaust flames at the back. It’s cool to get them but they do look a little bit oversized, though the bike does look a little plain with them removed. The front flamethrowers can be detached via a Technic pin easily. 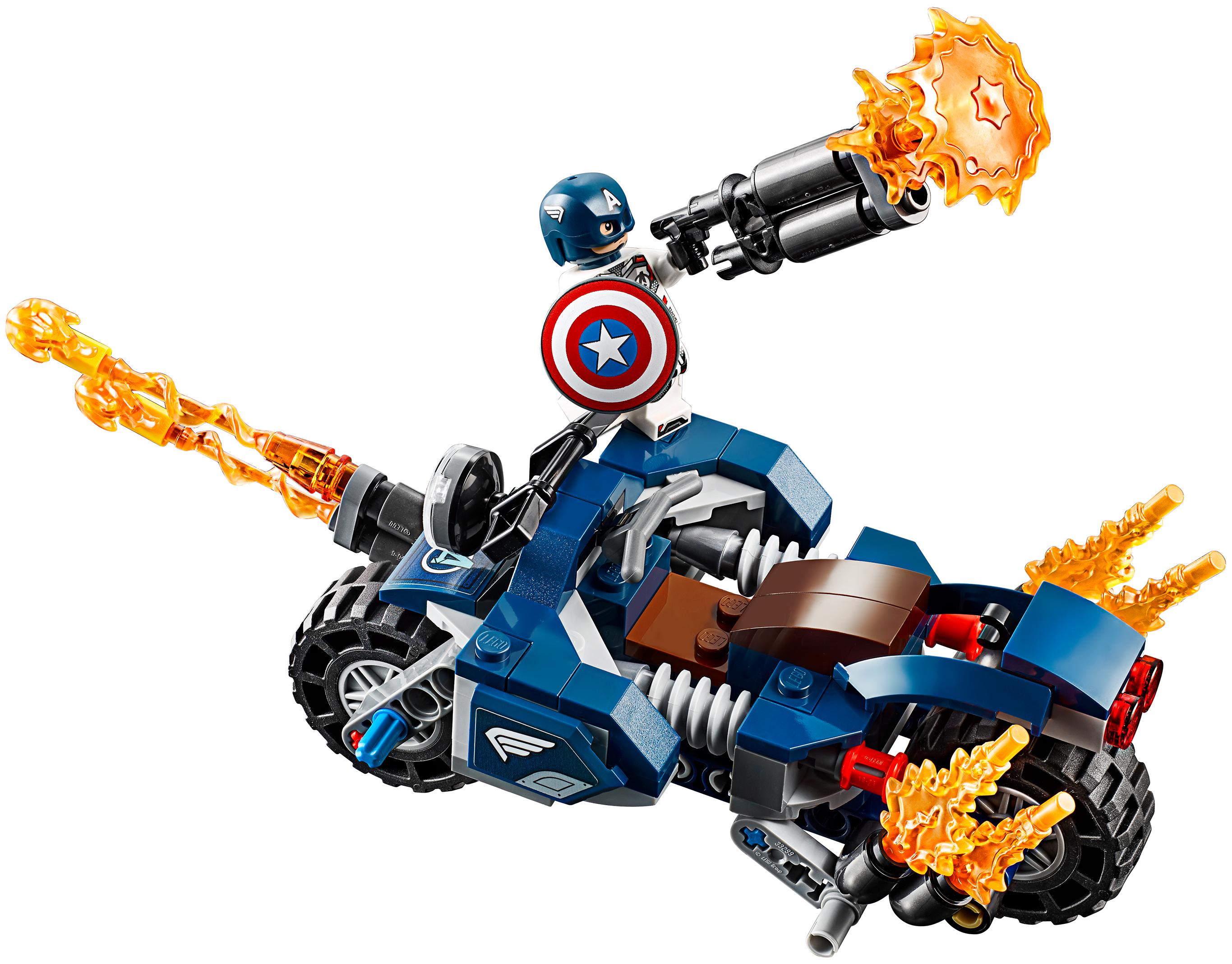 Minifigures like Captain America can grip the flamethrowers and use it as (very oversized) weapons. This shot also gives a better look at the seat – it looks decent and I like the use of the worm gears next to it. There are a couple of red tail lights above the rear wheel but unfortunately the rear mudguard piece has a hole in it and it looks kind of hollow to me. The bottom of the motorcycle is also built from Technic pieces and doesn’t look as solid as I would like. 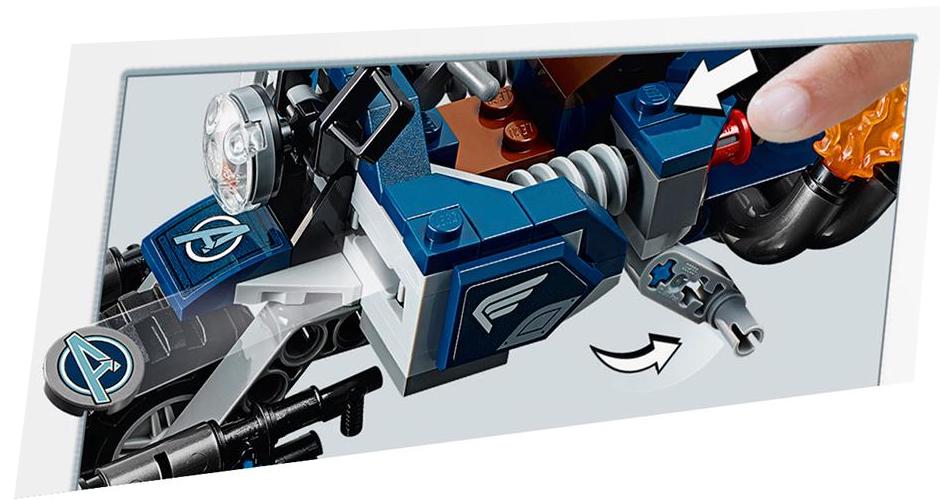 The motorcycle has a pair of disc shooters at the front. Pressing a pair of red bushings at the back will fire out printed 2×2 round tiles with the Avengers logo on them. There’s also a Technic piece at the bottom that folds out to act as a kickstand.

On the whole, I think this set is a mixed bag. The minifigures are okay and Captain America’s helmet is easily the biggest draw for this set. The build itself is… questionable though, and playability is mediocre. Pricing is also too high in my opinion – £19.99 UK and $19.99 USD is already kind of expensive for a bike that feels rather unsubstantial, and $39.99 AUD/$49.99 NZD is just too much.

Alas, LEGO chose to include a too-big yet too-small motorcycle in an overpriced set with three generic minifigures. It’s an okay buy but I feel like 76124 War Machine Buster gives you better bang for your buck.

That’s it for my review of the set! Let me know what you think – did you agree or disagree? – in the comments section below! Please do follow the rules as outlined in my Avengers Endgame Spoiler Policy.