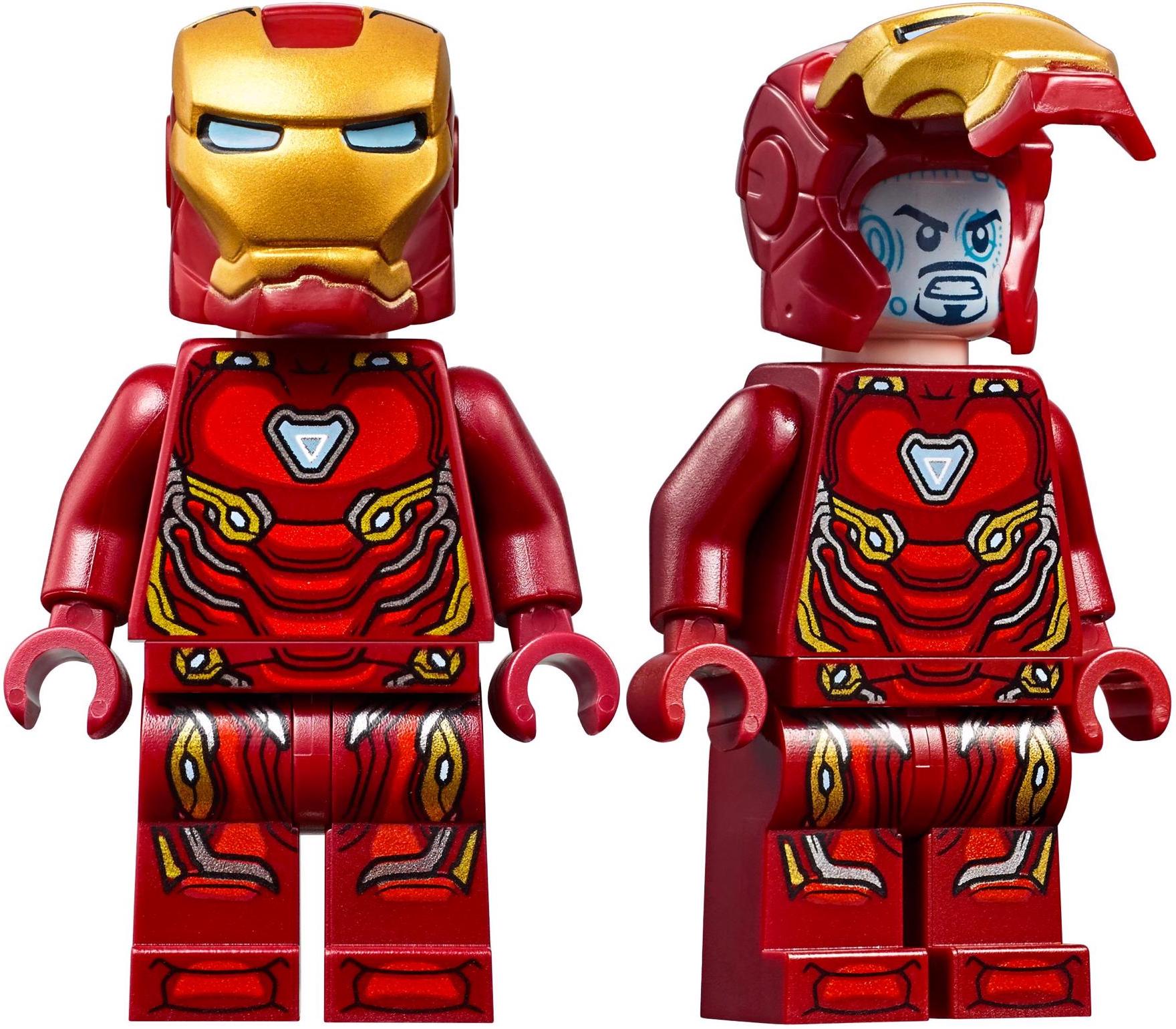 The first minifigure in the set is Iron Man in his Mark L nanotech suit. This minifigure is not new, having previously appeared in 76107 Thanos Ultimate Battle and 76108 The Sanctum Sanctorum Showdown. It has good printing on the mask, double-sided head, torso, and legs, but honestly its inclusion here frustrates me. We already got this suit twice in last year’s LEGO Infinity War sets, and to see it here again feels like a waste of a minifigure slot. LEGO should have included the new Mark LXXXV (85) suit in here, which would have freed up a minifigure slot for Ronin or Pepper’s Rescue armor. I’m honestly pretty disappointed to see this armor here again. 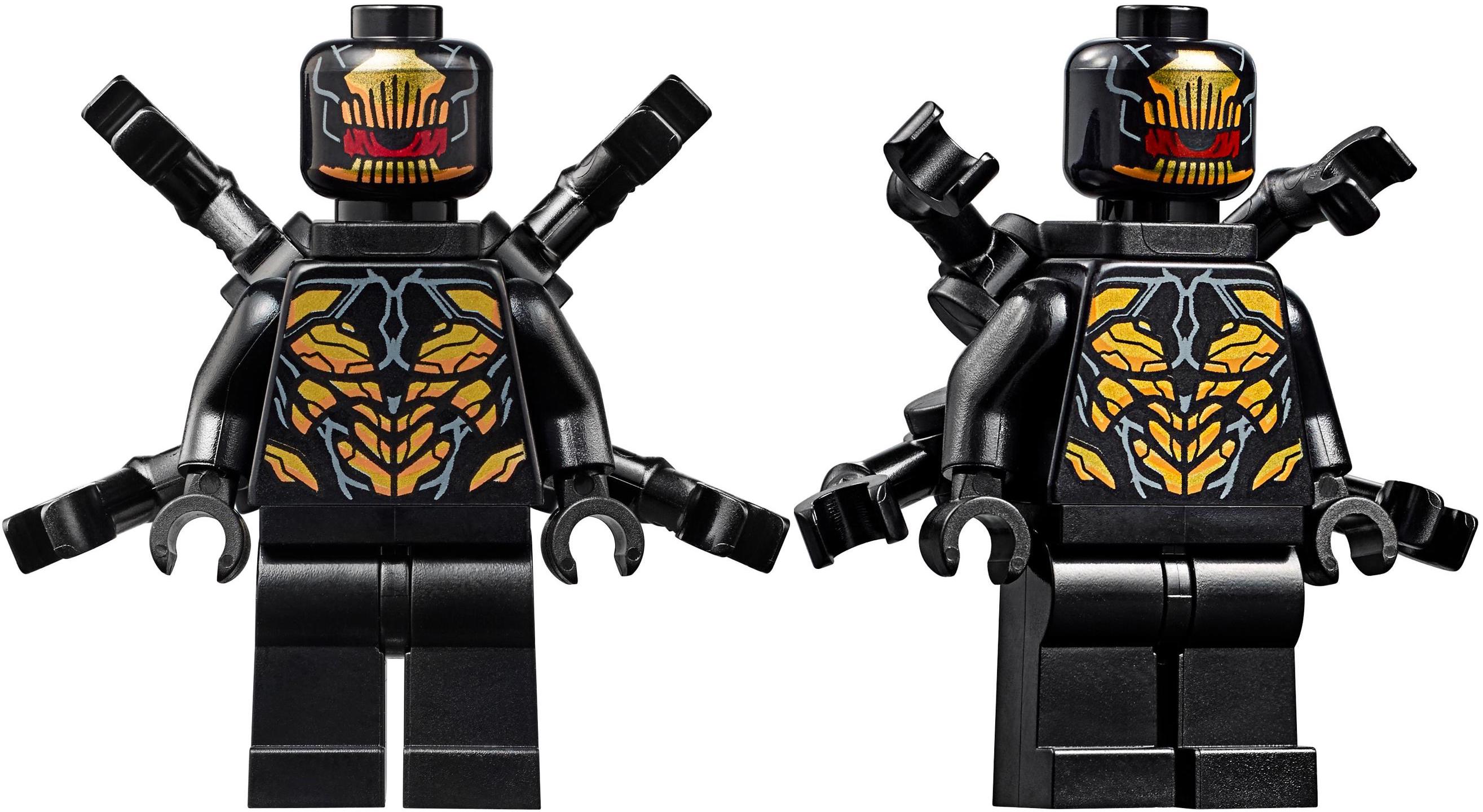 Next up there are two Outrideres included. These are the exact same ones that we got in three of the Infinity War sets last year. They’re alright minifigures and massable enough, but they do feel like filler and I would’ve preferred someone like Pepper Potts here instead (considering we haven’t gotten a figure of her since 2013). 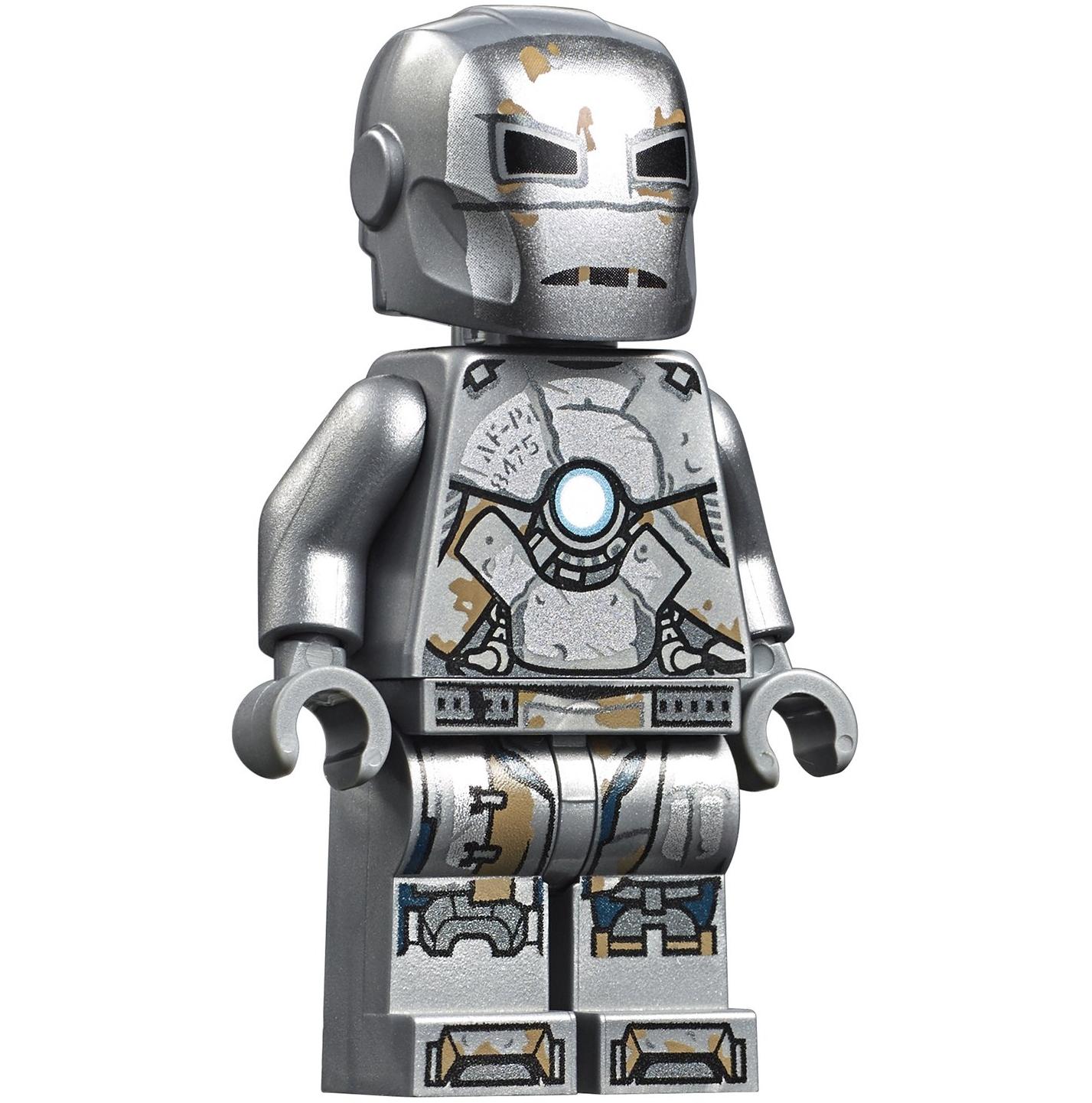 Now we move on to the brand new LEGO minifigures, starting with the one and only Mark I Iron Man suit! This suit was the one that started it all, built from a cave with a box of scraps. This is our first and likely only LEGO Mark 1 suit and I personally really like it. The silver body has great detailed printing on the helmet, torso, legs, and toes. I know some LEGO fans do not like the reuse of that helmet, and while I can understand its inaccuracy, I personally think it works okay and I’m just happy to get a Mark 1 minifigure with a good level of printed detail overall. This minifigure has a clear head, as it is supposed to represent an empty suit. 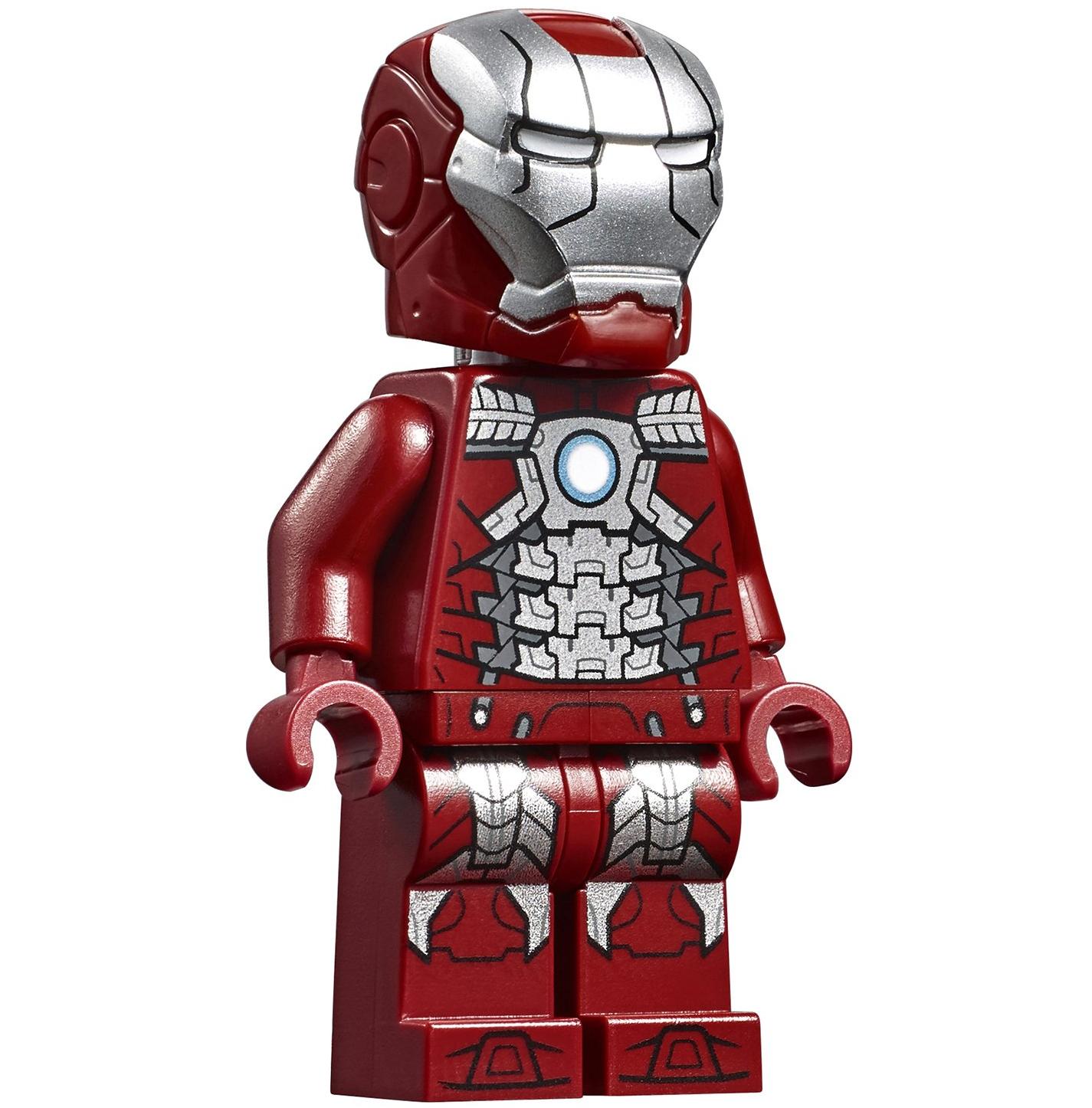 Up next is the Mark V suit, and I’m pretty sure most LEGO fans never thought we’d see this suit in LEGO form. This suit was the one that transformed out of a suitcase, and was used by Tony Stark against Whiplash in Iron Man 2. It has a red and silver helmet with new printed mask, and it has great printing on the torso and the legs. The lack of silver on the arms looks a little bit off for some reason to me but I think this is yet another great LEGO Iron Man suit and I’m super happy to see it here. Too bad its suitcase form is not included – you’d have to purchase 76007 Malibu Mansion Attack from 2013 to get it. Once again, this minifigure has a clear head underneath the helmet. 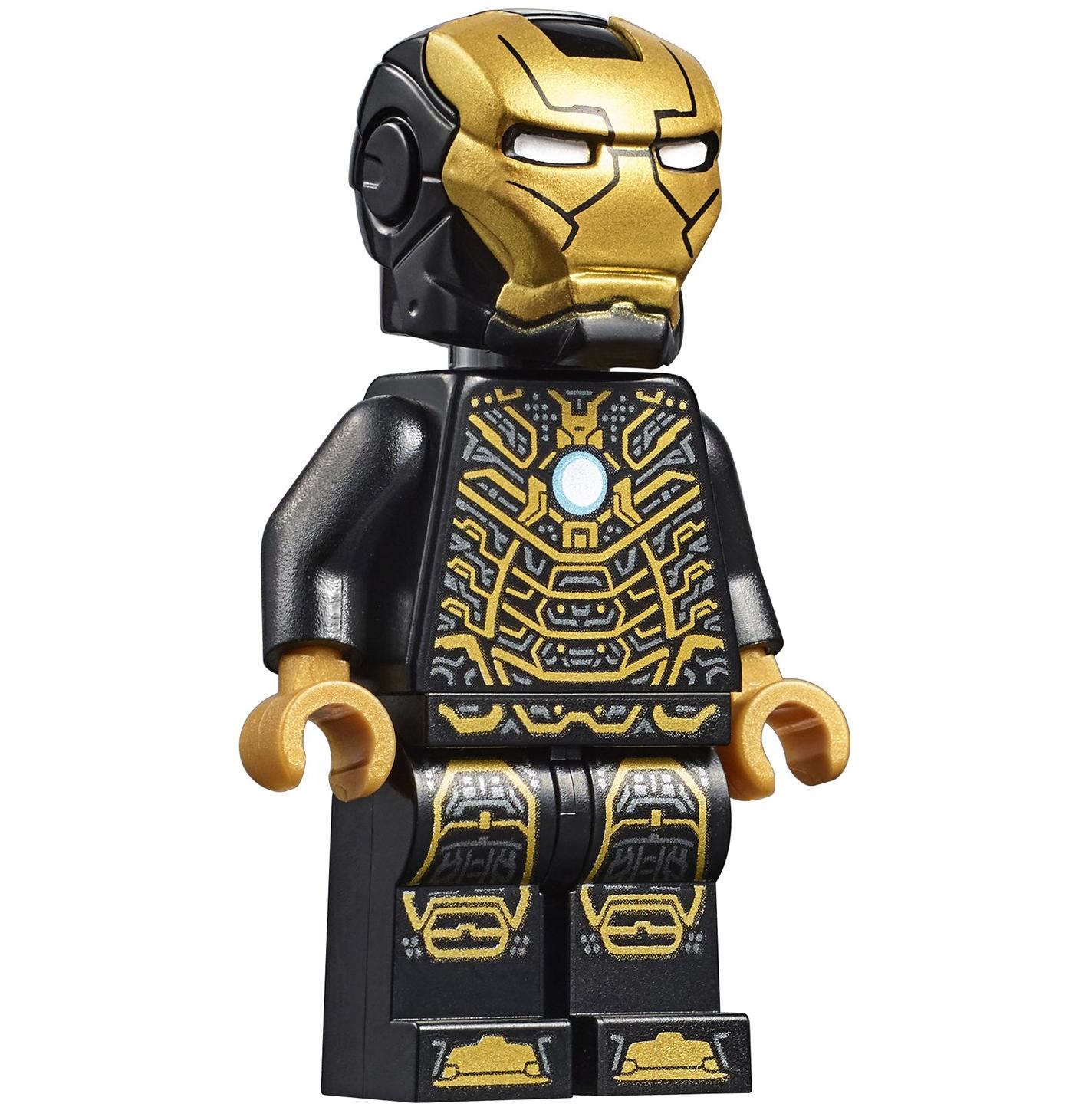 Our final minifigure is the Mark XLI Bones suit, and this is a cool but slightly random inclusion. This armor has a black and gold color scheme, with a new black and gold helmet recolor. The torso has very detailed printing that extends onto the hips, legs, and toes, and this minifigure has golden hands. It’s a great detailed minifigure overall, and once again it sports a clear head underneath the helmet.

Overall, I think this minifigure selection is still good. The Iron Man Mark L and the two Outriders aren’t great, but the Mark 1, Mark V, and the Mark 41 are all amazing minifigures that deserve a spot in every LEGO Marvel Superheroes collection. 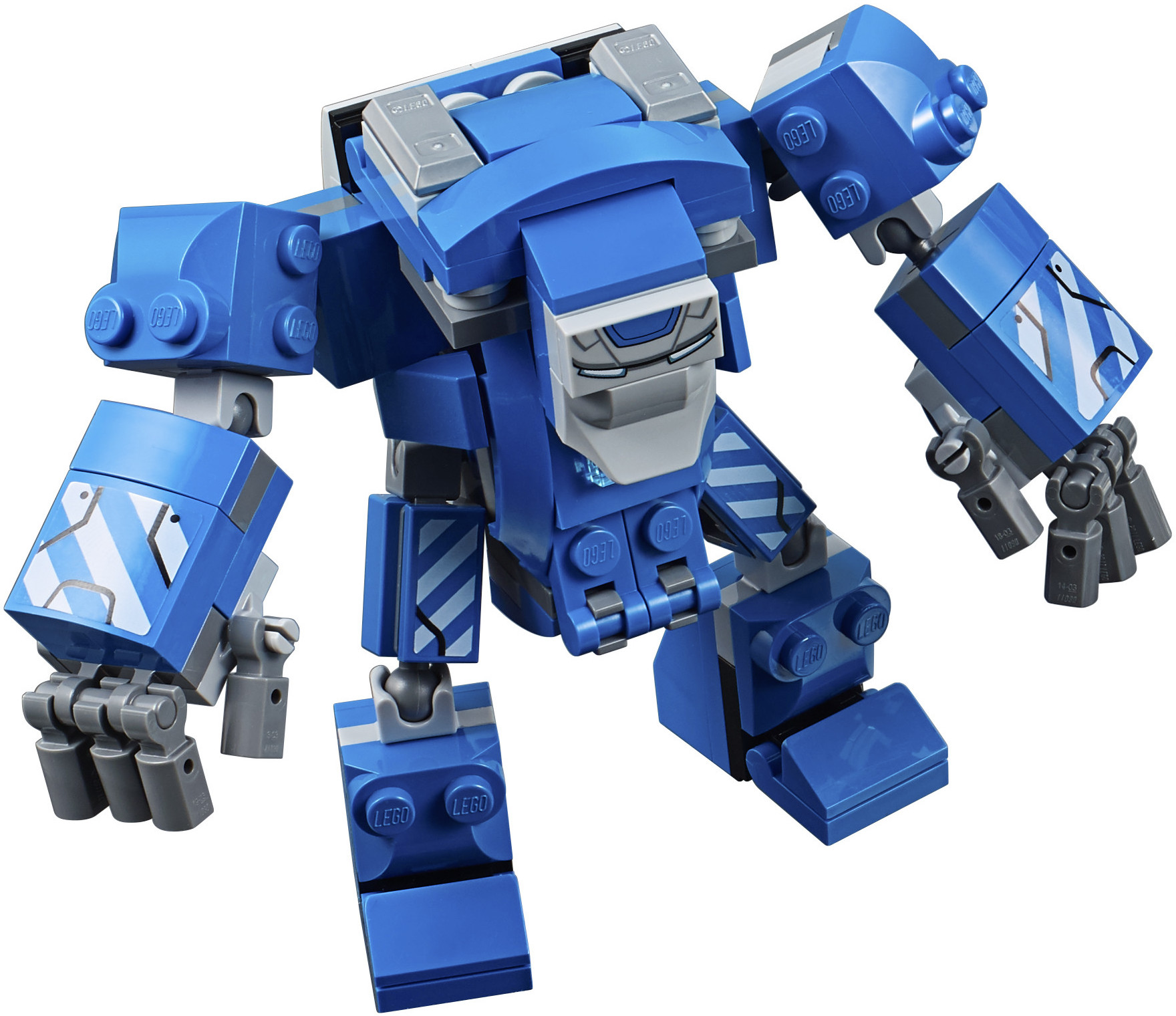 Now let’s move on to the builds! The first build is yet another Iron Man suit that has been the subject of many memes, it is IGOR! The Igor armor, aka the Mark 38, is a larger suit built by Tony Stark for heavy lifting. It has a blue color scheme and here it is fully brick-built. 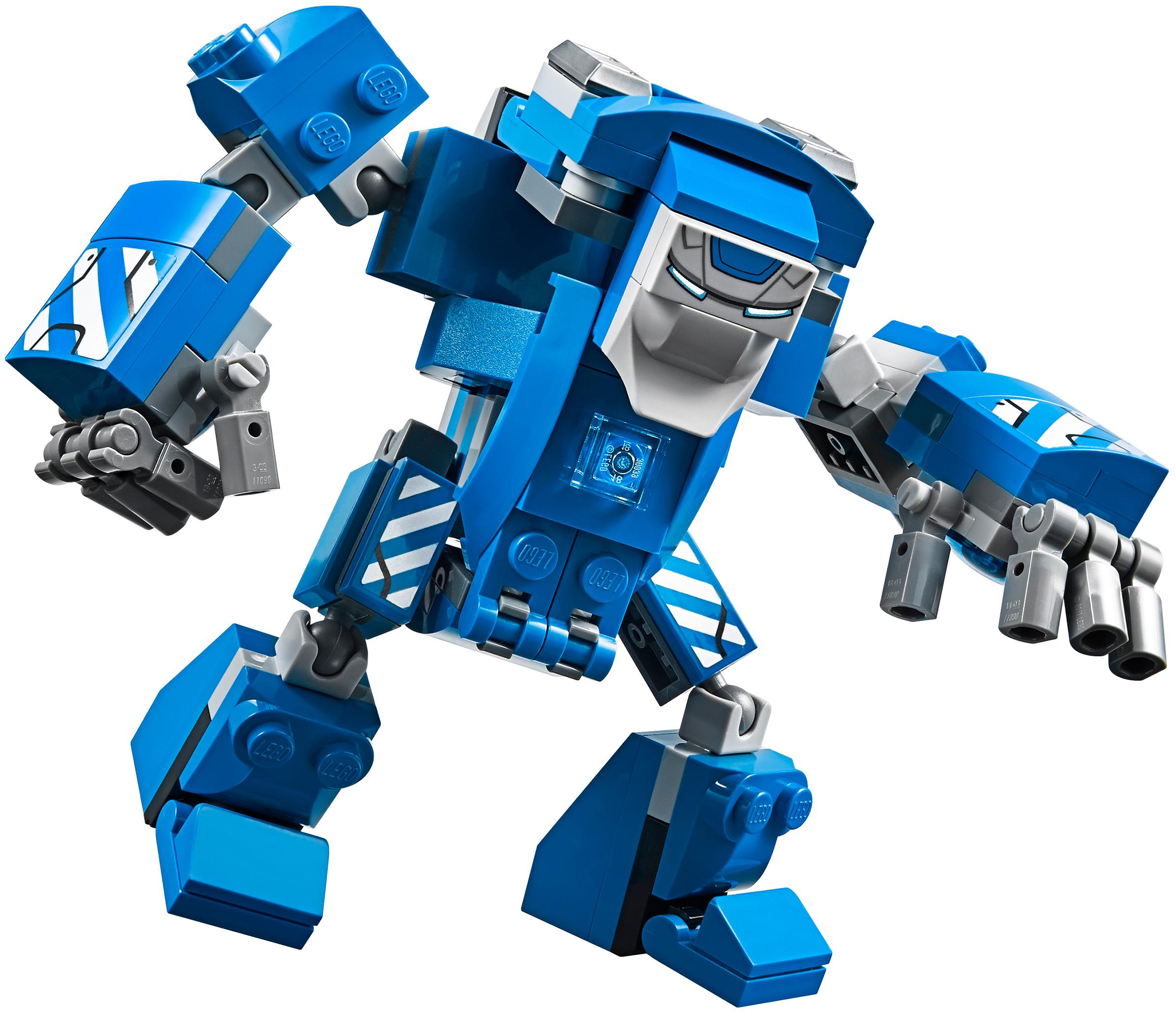 However, many have made fun of this armor simply due to… well, to put it plainly, it’s just not good. The Igor armor in the movie is like a scaled-down Hulkbuster, with a natural curving design. Unfortunately, this LEGO version is very boxy, with very strange proportions overall. I will admit that it does have good poseability, with mini ball joints all over and four poseable fingers per hand, but it just does not look good at all. 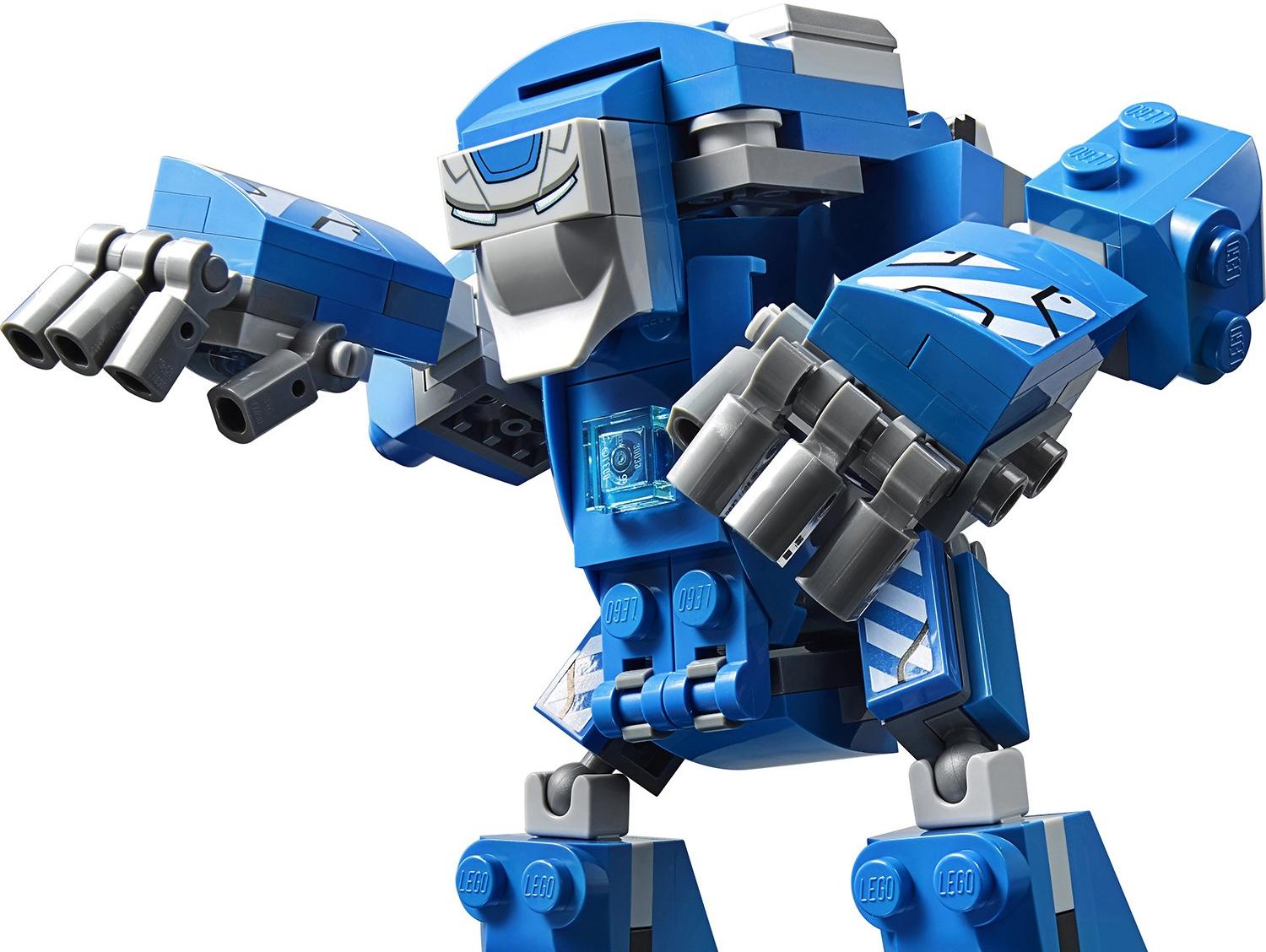 There’s a printed 1×2 tile used for the face and personally I think it looks a bit weird with the duck bill-like design around the mouth area, though I appreciate what LEGO was trying to do. There’s a brick built arc reactor in the center, and some stickers are used on the model. 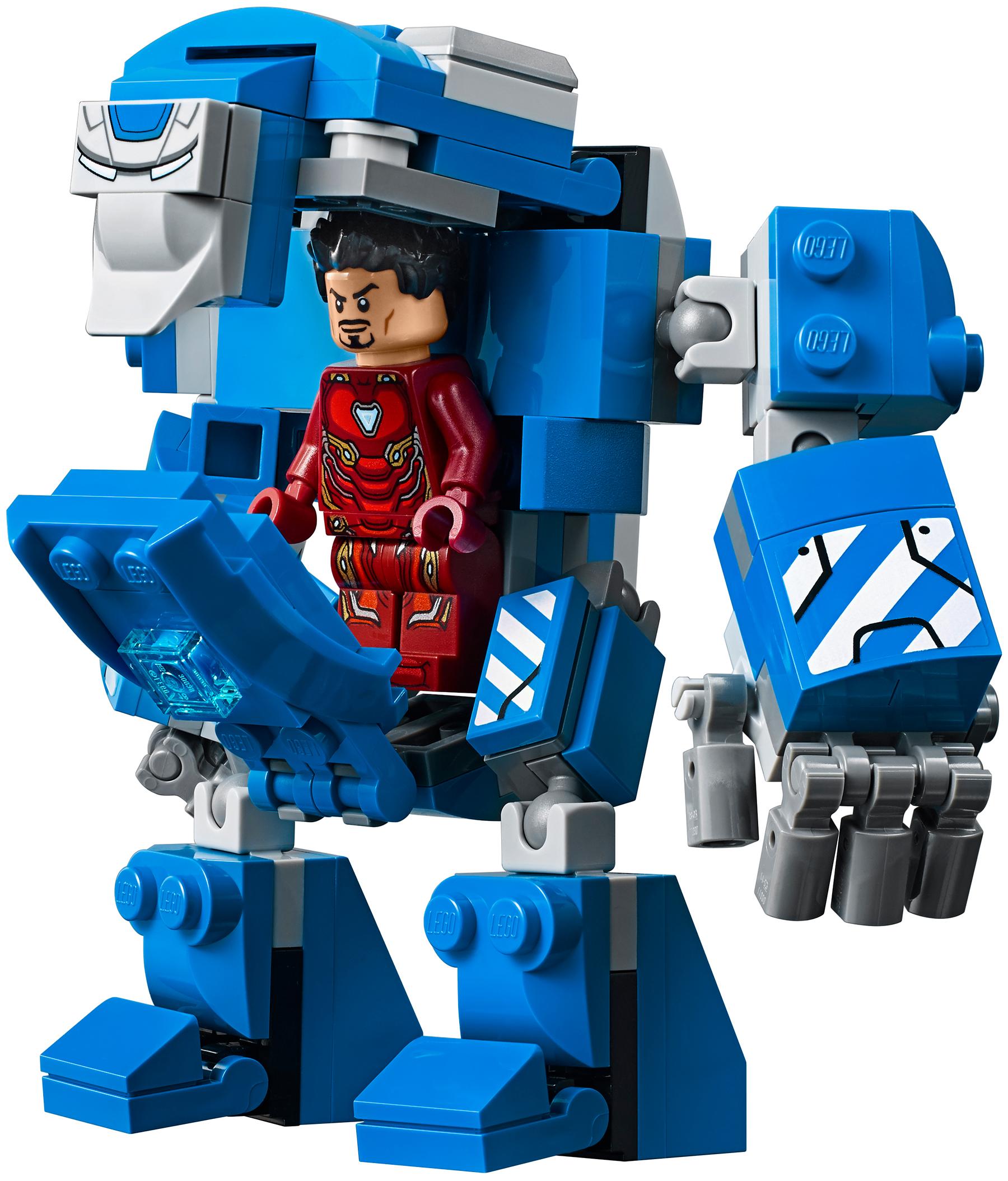 The reason for Igor’s odd proportions is because LEGO designed it so that you could fit a minifigure inside. Here, Tony Stark is shown inside the Igor suit. It works fine – though gaps in the model mean you can see the minifigure even when the suit is fully closed up – but I would have preferred a much better looking model without this ability over this current, honestly ugly model. 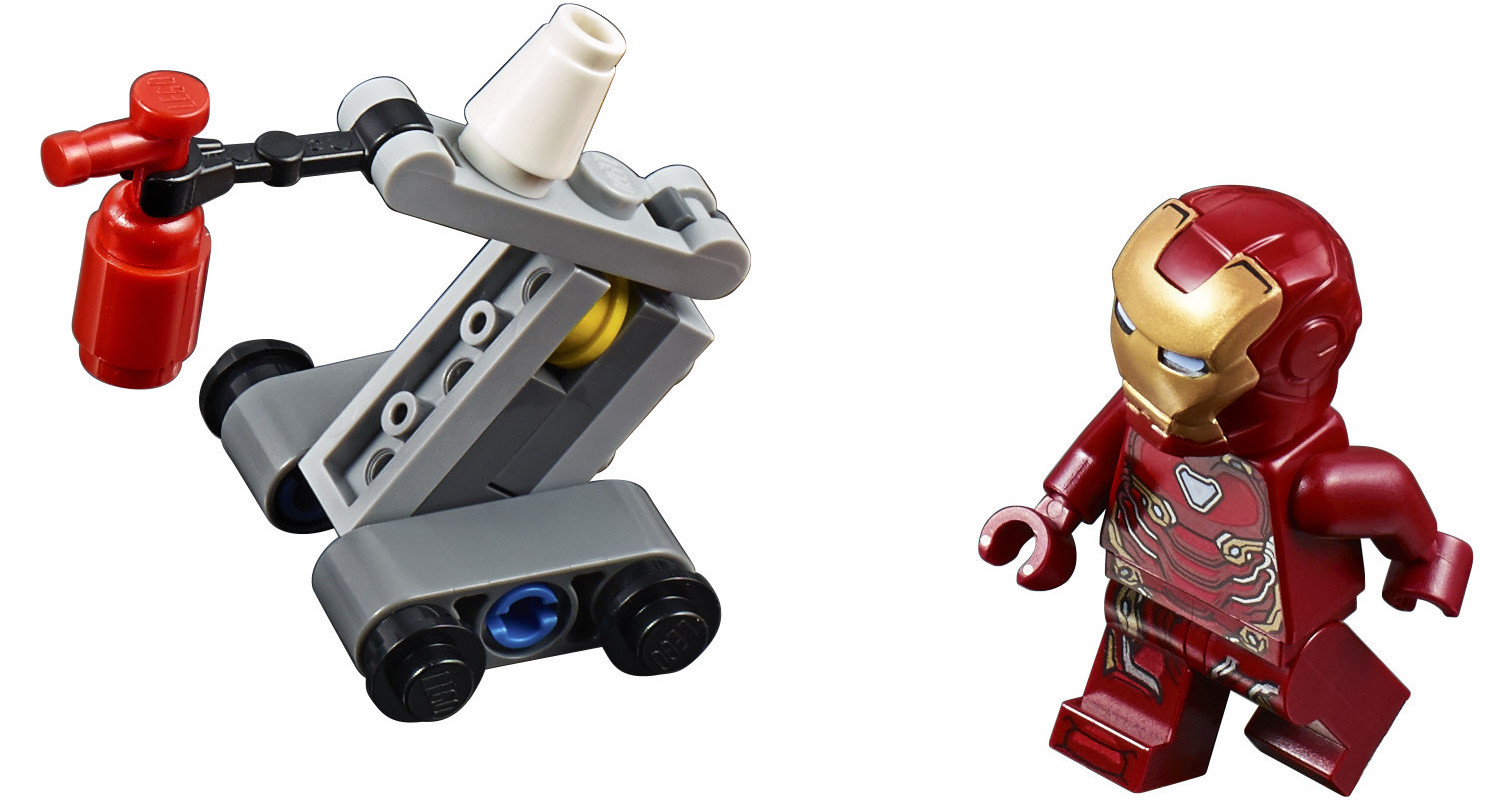 There’s another ancillary build, which is DUM-E! DUM-E is a faithful robot companion of Tony Stark that has appeared three times in LEGO form, though unfortunately the other robot, known simply as “U”, has not been in an official LEGO set before. DUM-E has a basic design here, with rolling wheels, poseable segments, and a fire extinguisher. It looks pretty good, but I think it’s a little bit big. 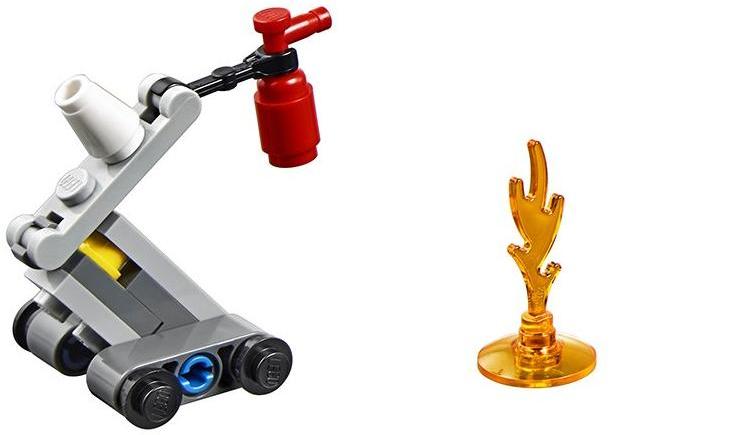 Two LEGO flame decorative pieces – made from two pieces – are also included in the set. These serve to accessorise the area and show destruction when the Outriders attack. Fortunately, DUM-E is there to put out the fires. 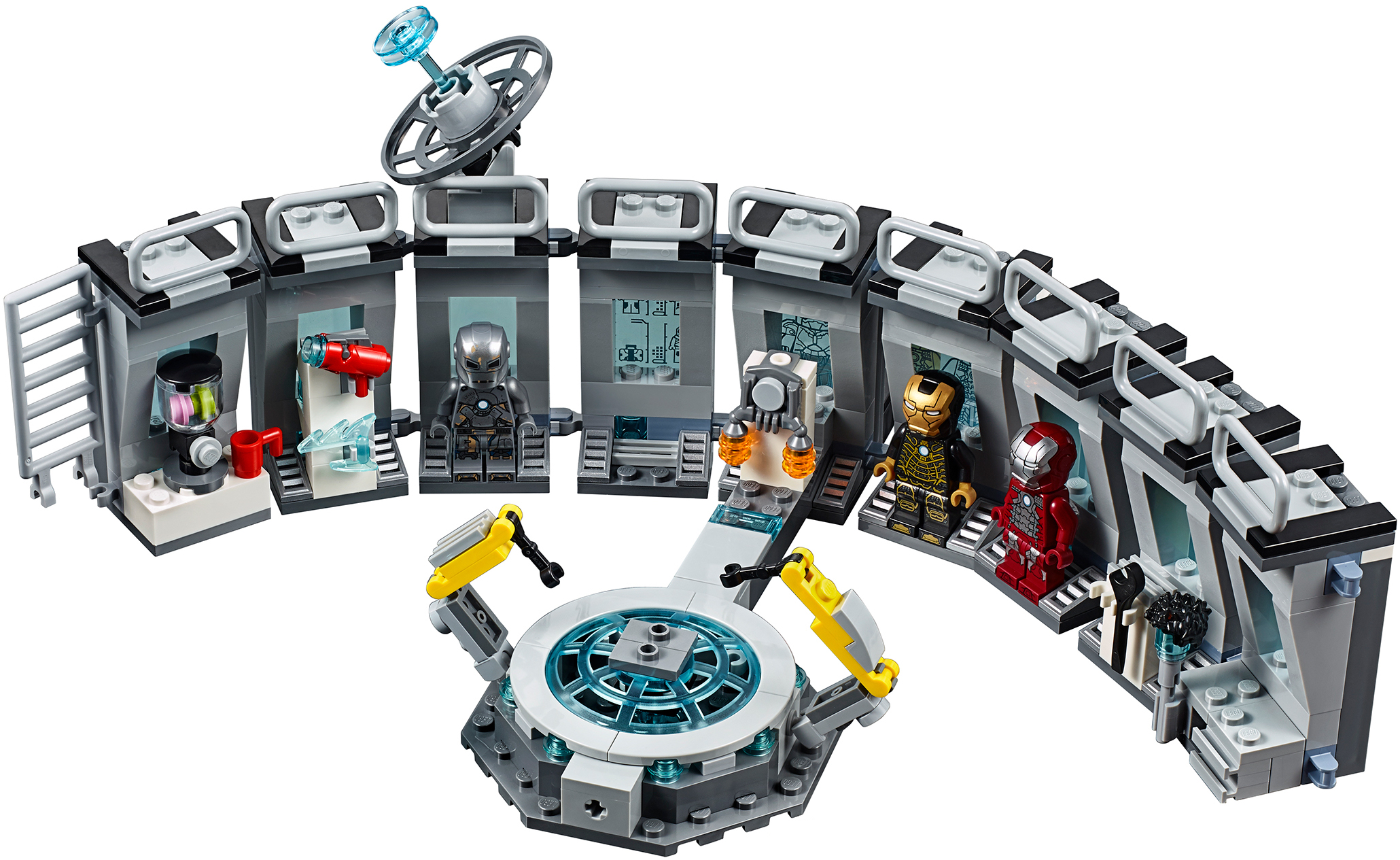 Now let’s move on to the main build itself, the Hall of Armor. Tony Stark’s Hall of Armor famously stores all of the billionaire’s Iron Man suits, and was last seen in Iron Man 3. The LEGO version of this is modular, with one central modular wall section and two main add-ons. 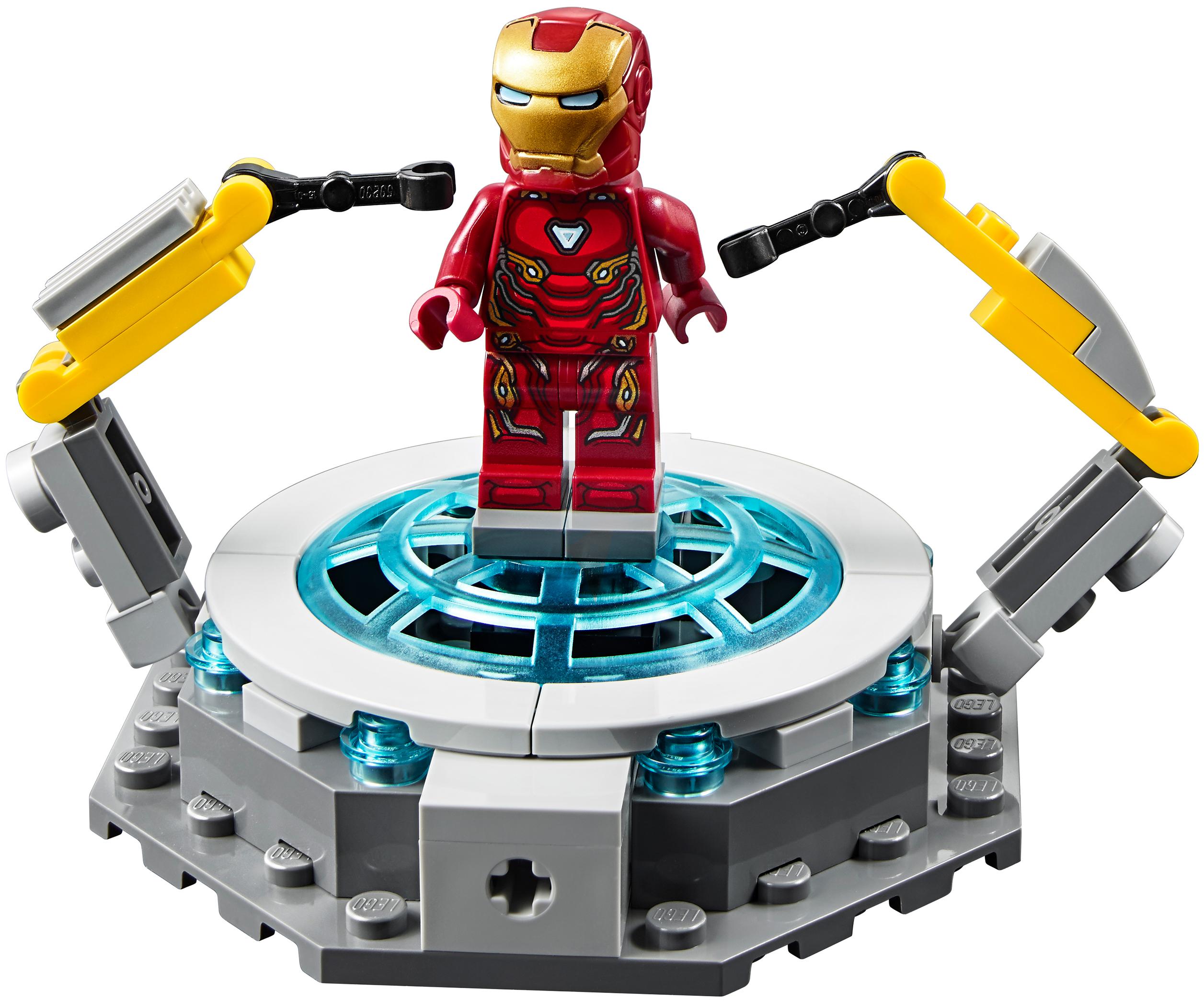 The first of the two main add-ons is this rotating platform for Iron Man, and it is simply glorious! This rotating platform is an incredibly iconic part that appears in so much Iron Man material and it’s great to finally see it here – a truly fitting addition to the Hall of Armor. There are two axle holes at either end, allowing it to connect to the front of the Hall of Armor. The hollow translucent blue radar dish in the center rotates, and there are two jumper plates where you can place the Iron Man minifigure. There are two robot arms mounted on mini ball joints, along with additional trans blue details for embellishment. 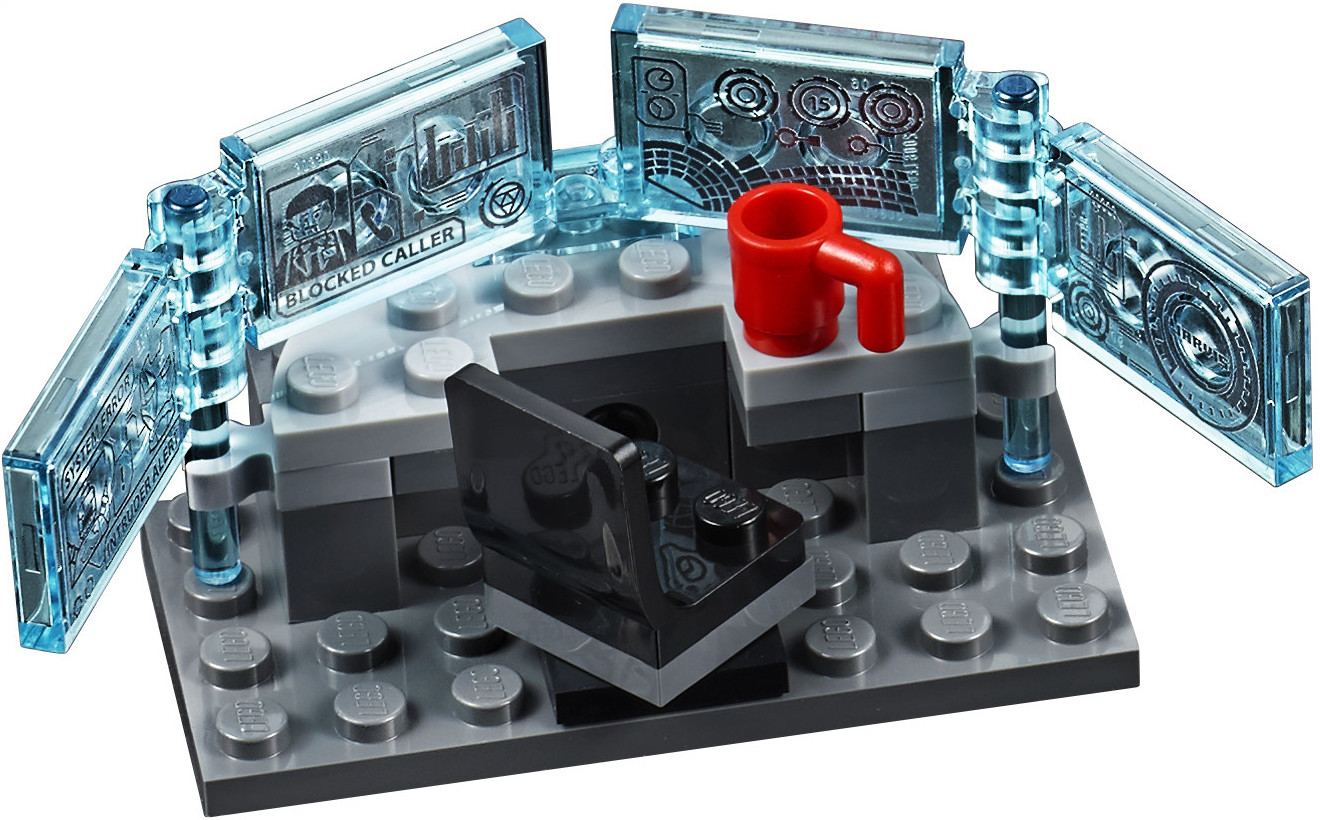 The other main add-on to the build is this computer station. It has a rotating chair, a table, and a red coffee mug, along with four translucent blue computer screens. 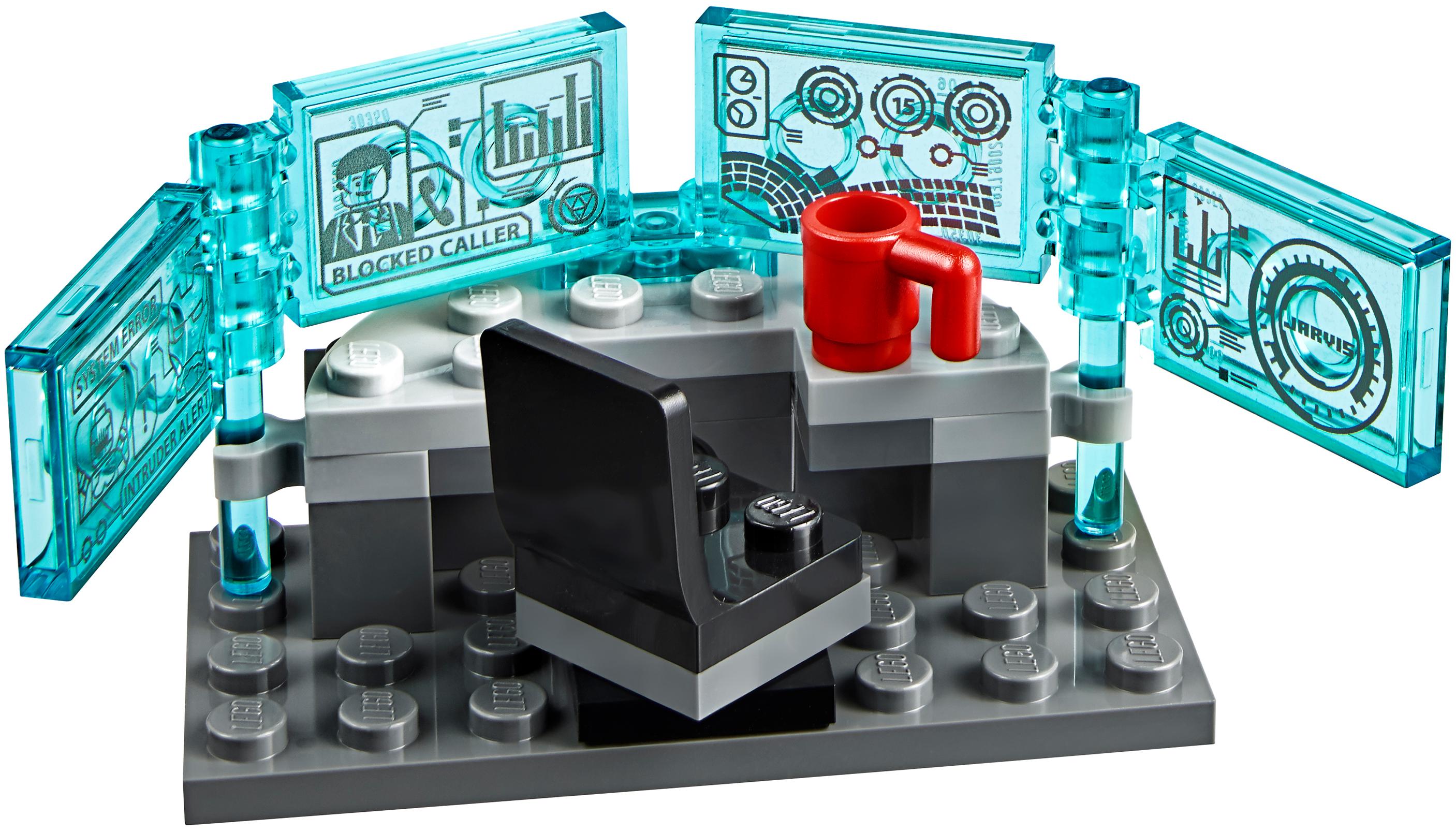 The screens all have unique details on them – an Outrider intruder alert, a screen showing Agent Coulson as a blocked caller (a nice Avengers easter egg), some sort of computer display with data, and finally a sticker depicting the famous J.A.R.V.I.S. artificial intelligence. This computer station can be attached to the other side of the rotating platform… 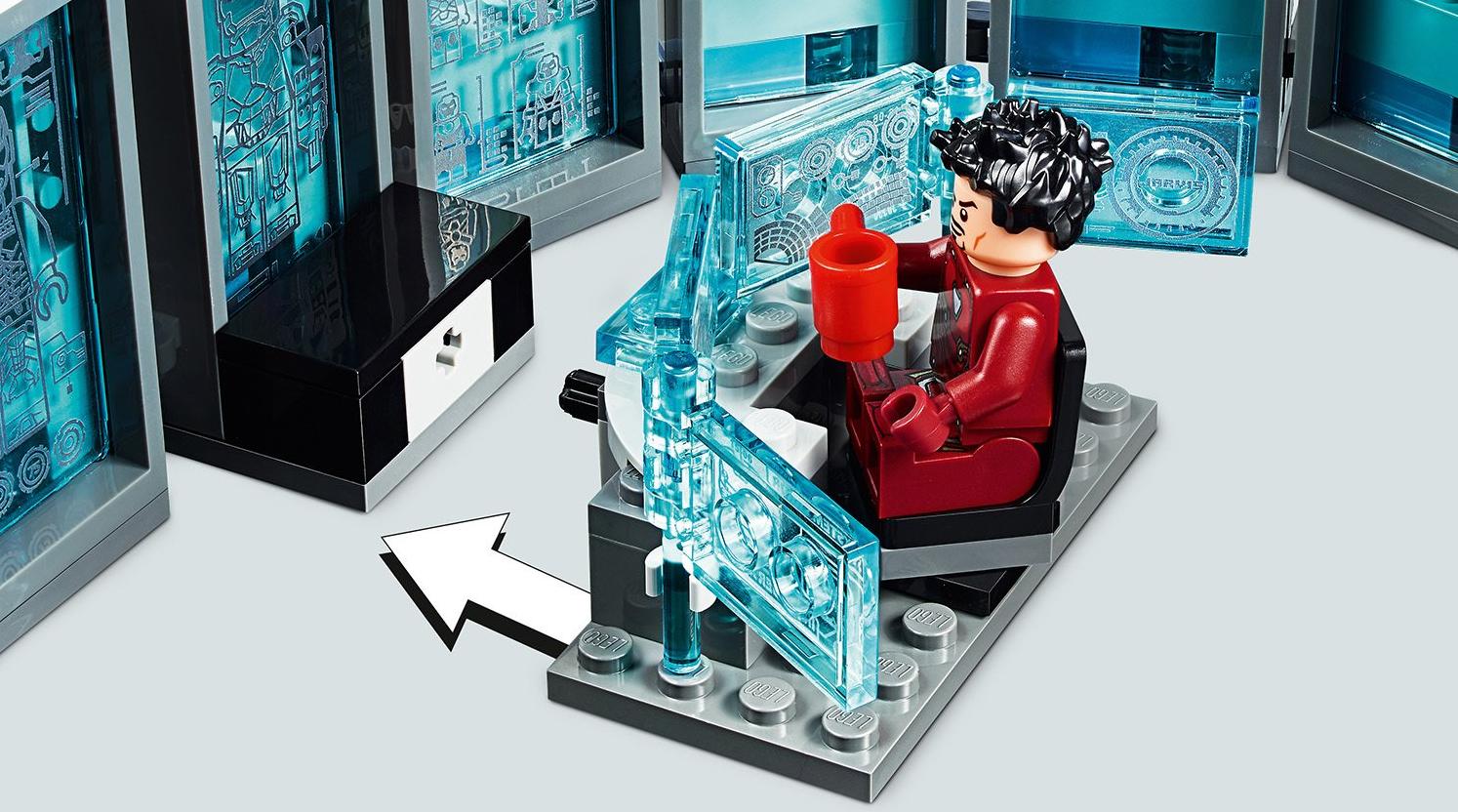 Or on the back side of the Hall of Armor, where there is another axle hole to be found. 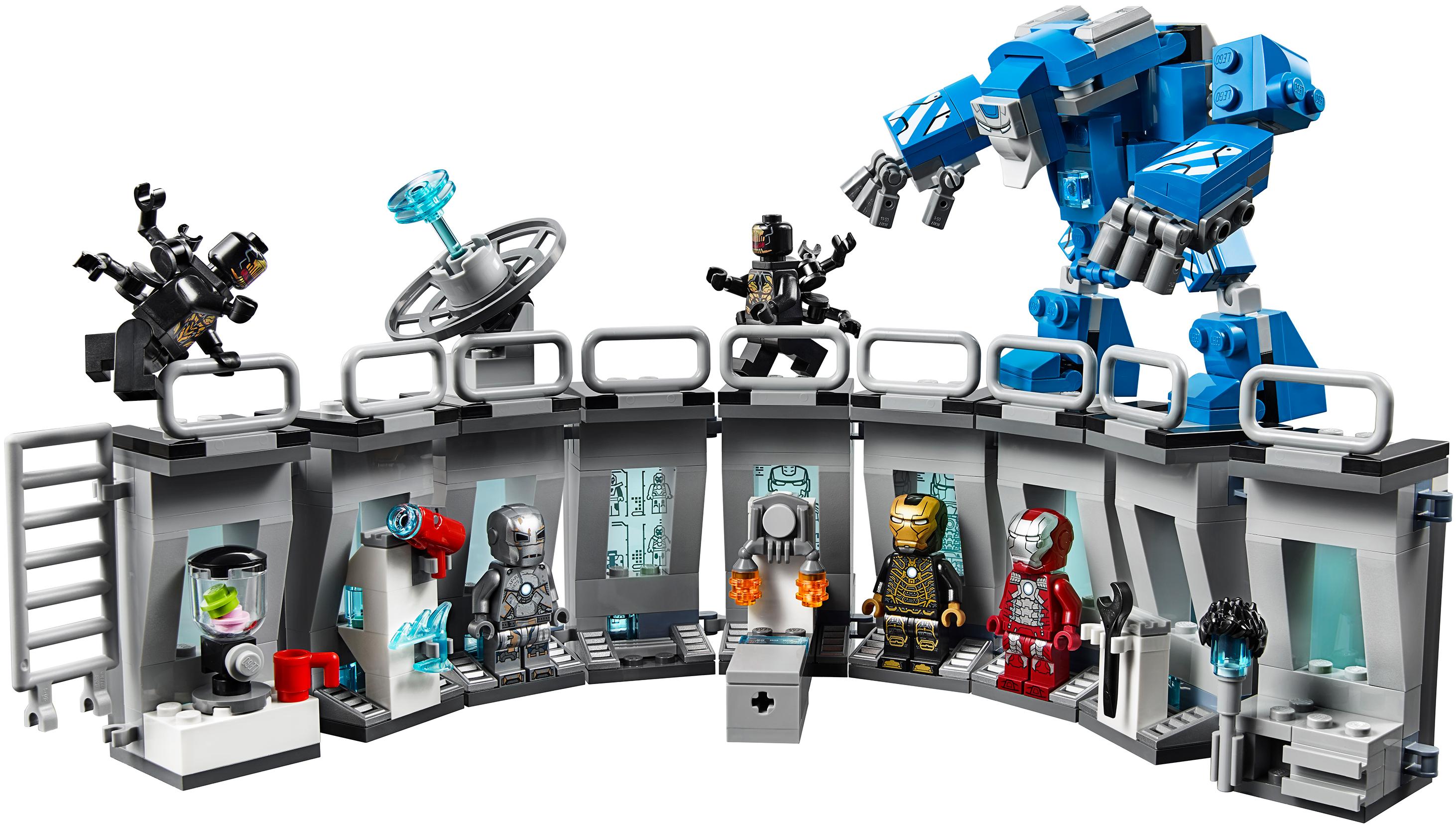 Here’s a look at the main LEGO Hall of Armor modular wall section. This is built in 9 individual segments that can be separated and rearranged for customization. The nine platforms have individual details, starting from the left in the above picture:

There is also a satellite dish mounted on the catwalk above which can be removed and moved around, along with a ladder on the side allowing minifigures to access the catwalk. 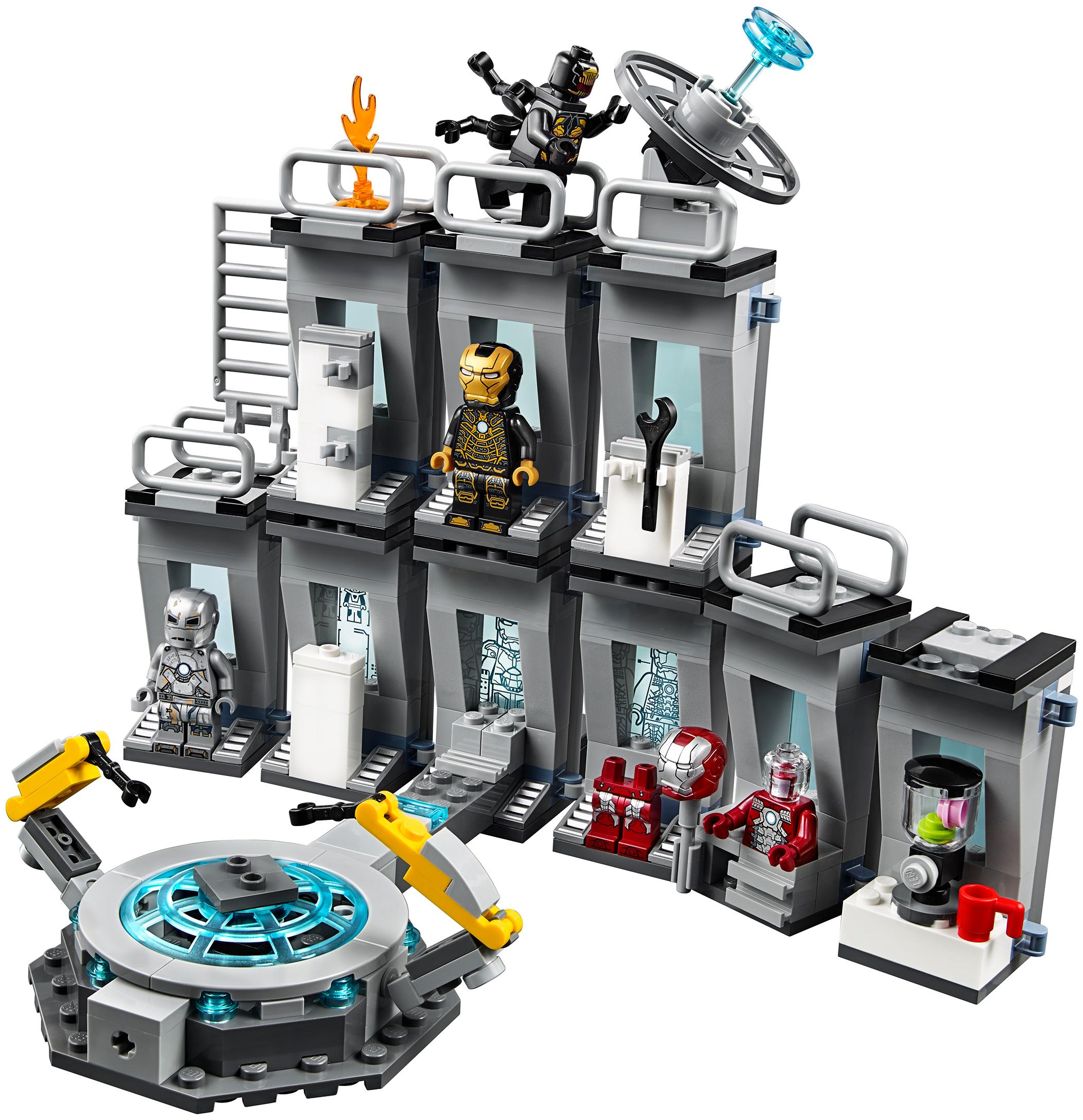 The nice part about all the sections is that they are highly modular and you can customize the layout. You can even do this two-storey design if you like, and if you buy additional sets you can make a really big LEGO Hall of Armor! 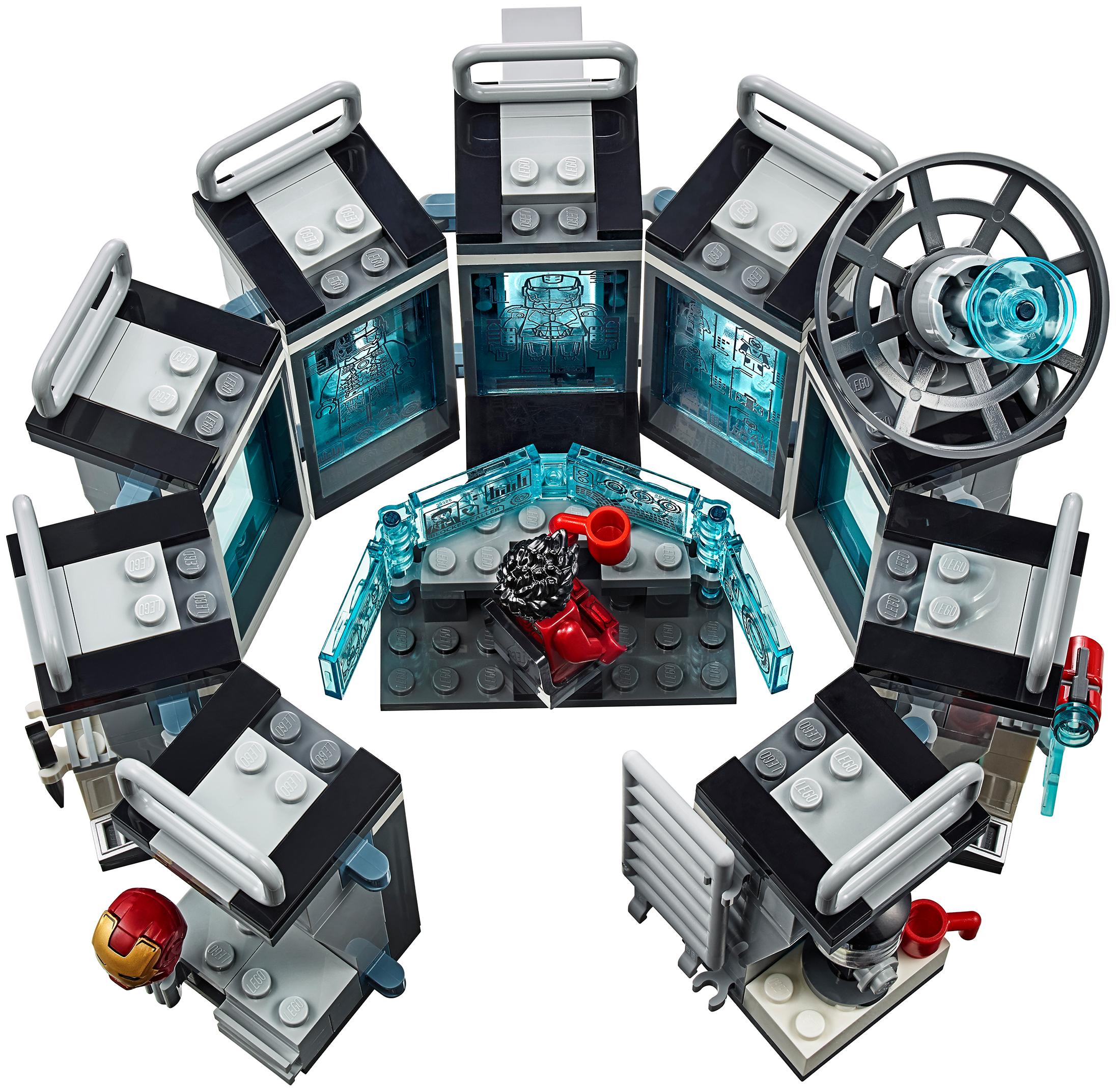 You can also fold all the segments around to make an almost-complete circle, which is yet another interesting design. I personally prefer a much gentler curve though.

Finally, here’s a view of the sticker sheet. The stickers used on the top are used on Igor and the computer screens, but the three large stickers on the bottom are used on the trans blue panels in the Hall of Armor. The first one shows the Mark V – included in the set – but the second one shows the Mark 25 Striker suit, which we’ve never gotten in LEGO form. It looks fabulous in the sticker graphic and I can only hope we’ll get it in official LEGO form someday. The large panel sticker on the right has six other suits lined up for the House Party Protocol, famously implemented in Iron Man 3.

However, it’s not without its shortcomings. While I do like the modular design, it does make the Hall of Armor look slightly disjointed. Due to the piece count limitations, the individual modules themselves also lack detail and I personally think they look a bit too underdetailed. It’s also not wholly accurate to the in-universe design, which looked more like a group of fully enclosed cabinets. Igor is also entirely forgettable.

Still, getting an official LEGO Iron Man Hall of Armor is exciting, and I personally really love the three new Iron Man suits in this set. Yes, the Outriders and the Mark L could have been better, but the new Iron Man suits are fabulous and I think they’re amazing. Playability is also good enough for me, and I think the price is actually surprisingly reasonable, especially in Australia and New Zealand.

Thanks for reading! Let me know your thoughts in the comments section down below, but please do follow the rules as outlined in my Avengers Endgame Spoiler Policy.

P.S. Check out my guide to Every LEGO Iron Man Suit So Far! [Updated April 2019]