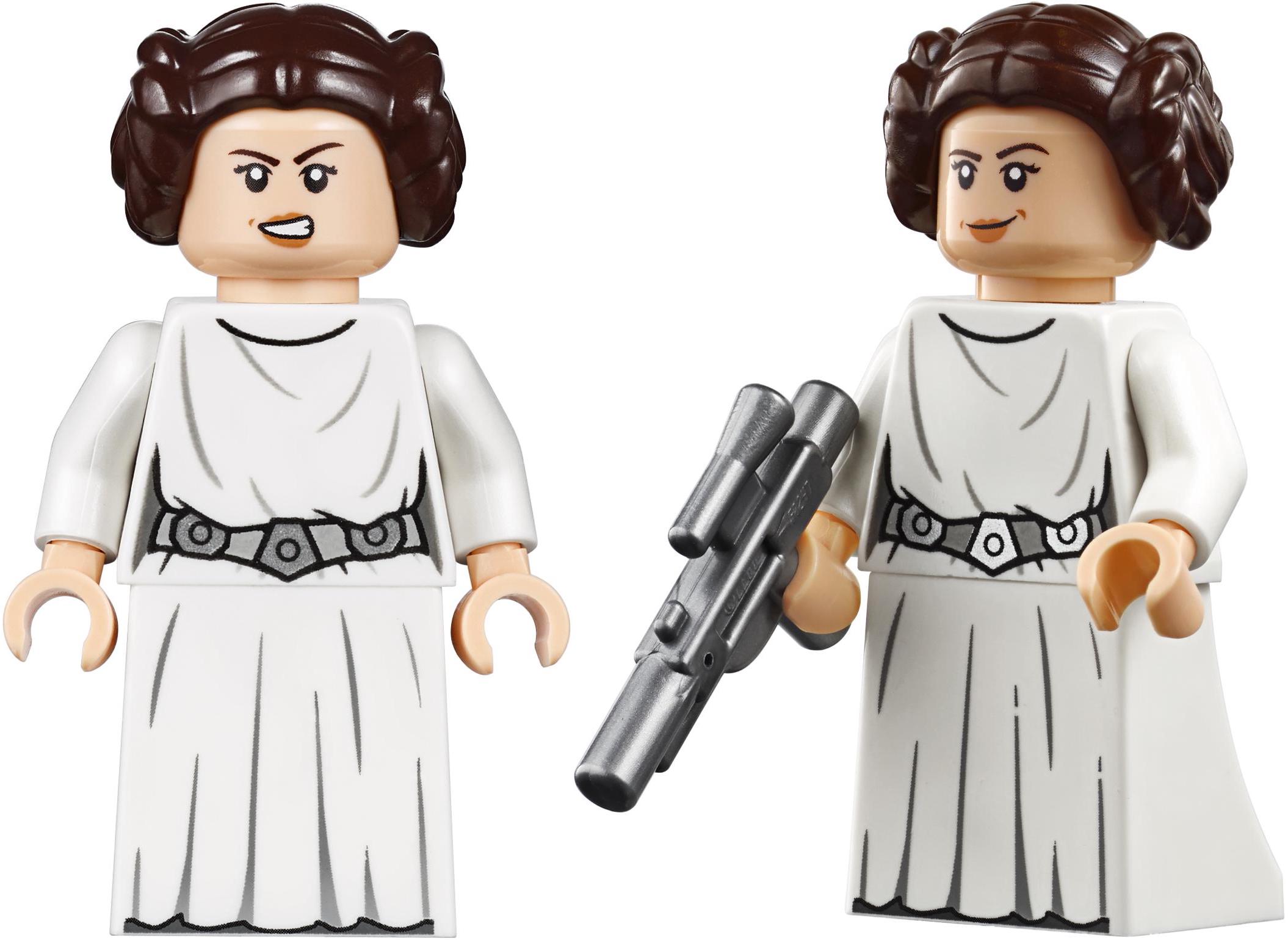 The first minifigure in the set is the new Princess Leia minifigure. This figure is an update to the one introduced in 75229 Death Star Escape. She has her dark brown double-bun hairpiece (which has been in use since 2011), her double-sided head (smiling and smirking), and her torso print which is from 2016’s 75159 UCS Death Star. However, what makes this minifigure new is her new dress piece – instead of minifigure legs Leia comes with a printed white LEGO robe piece which I think looks fabulous. It’s the first time we’ve gotten LEGO Leia in a dress but it is accurate and it  looks amazing. Leia is armed with a silver blaster pistol and also comes with a spare set of plain white minifigure legs. 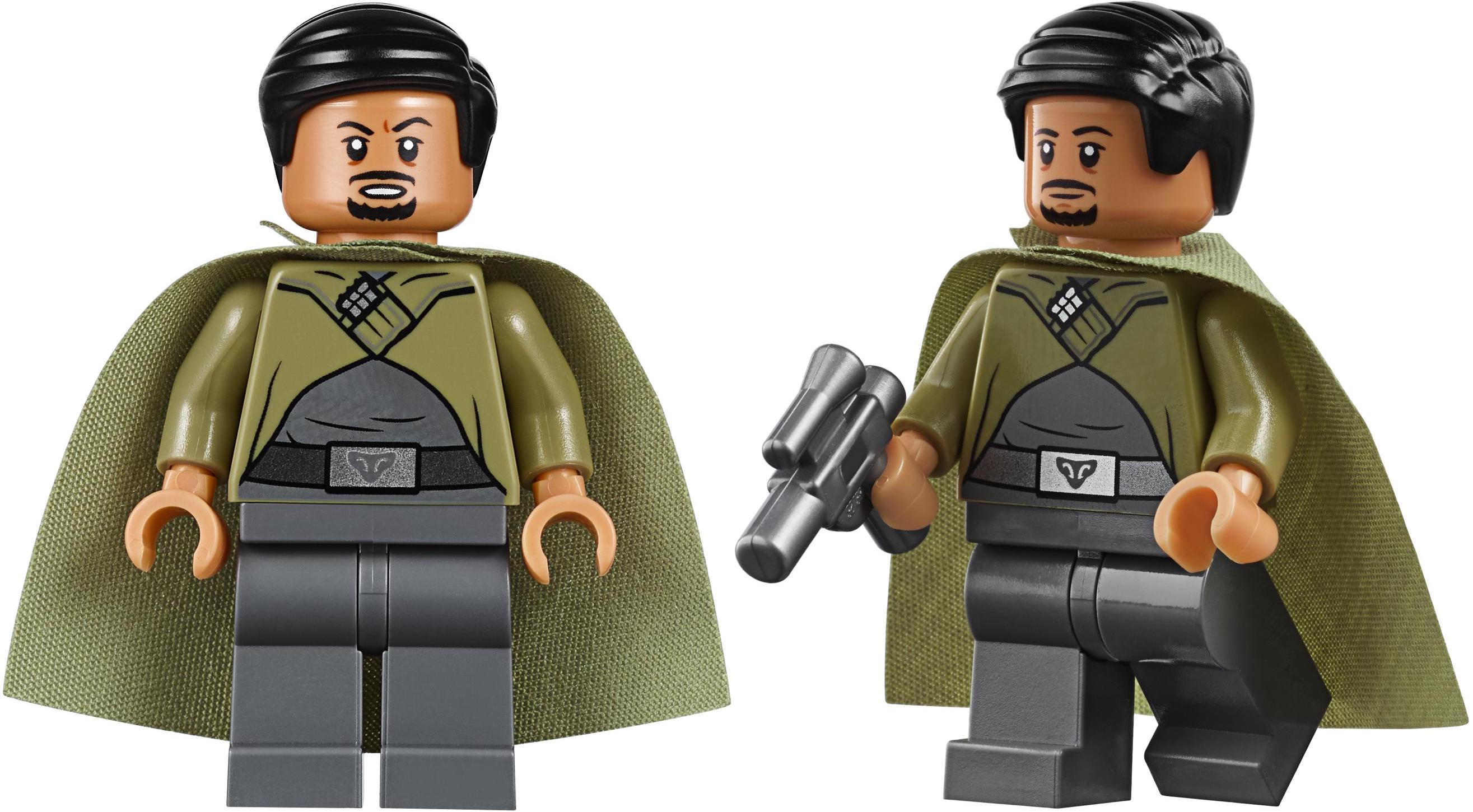 The second minifigure in this set is Bail Organa, Leia’s adoptive father. This is the first time we’ve gotten Bail in LEGO minifigure form and while he wasn’t on the Tantive IV during movie scenes, I’m still super happy to get him. He has a combed black hairpeice and a new double-sided head print which looks fabulous, though he does look a little bit on the young side. His torso has an olive green color scheme with a lower dark grey design which leads onto his unprinted dark grey legs. His cape piece is olive green in color and it looks great, but oddly enough it’s the old-style, papery type of LEGO cape and not the new cloth-like one. Bail is armed with a silver blaster pistol. 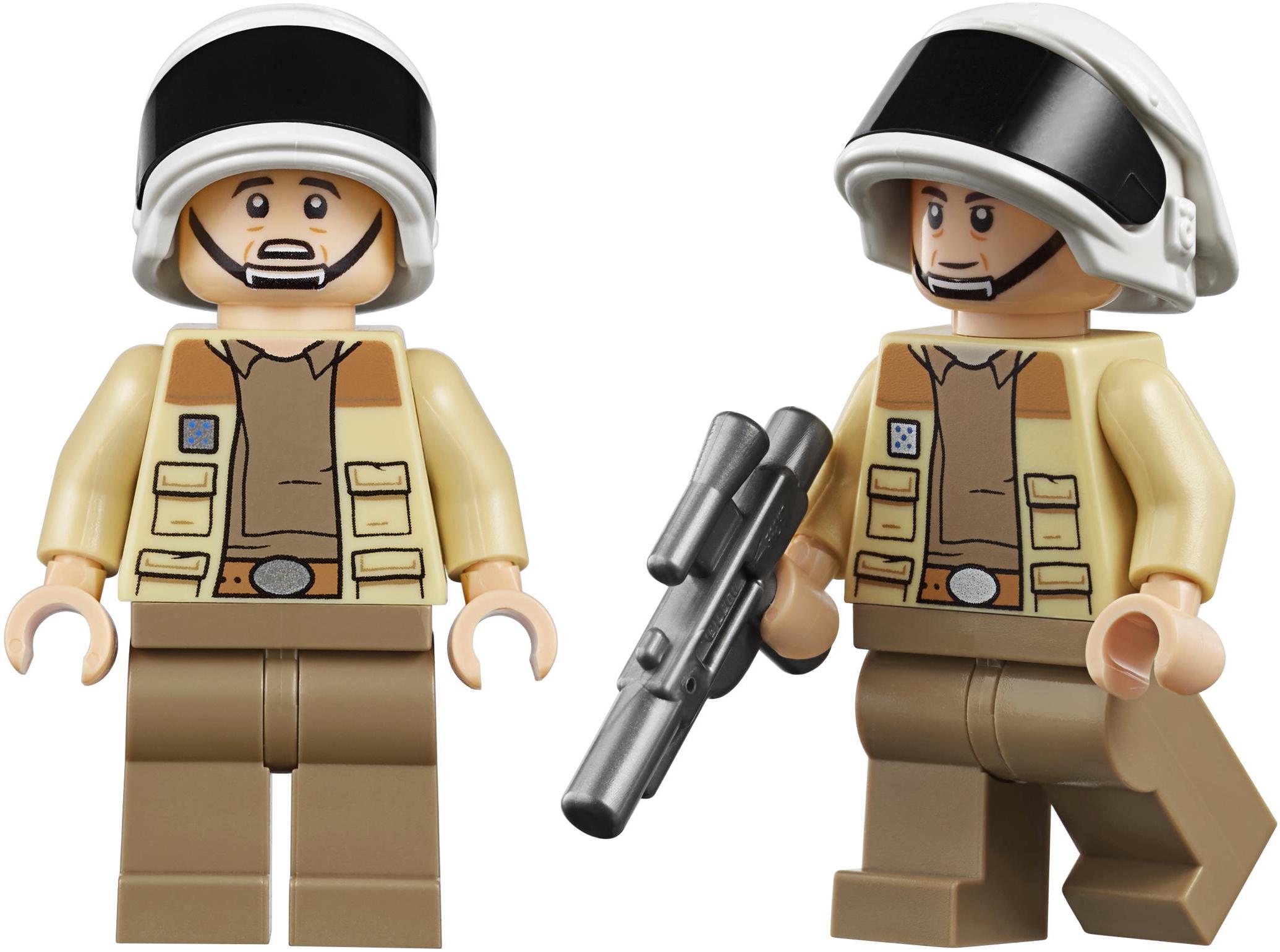 The third minifigure is Captain Antilles, the captain of the Tantive IV. This minifigure has only previously appeared in 2009, and thus his re-release in minifigure form is highly anticipated. Captain Antilles reuses the Rebel Fleet Trooper helmet (which is two separate pieces) and has a new double-sided head print – a stoic expression and a scared one (which is suitable for when Vader chokes him!) He has a new printed tan jacket and unprinted dark tan legs, but personally I feel like there’s a bit of detail lacking on the legs. Captain Antilles is armed with a silver blaster. 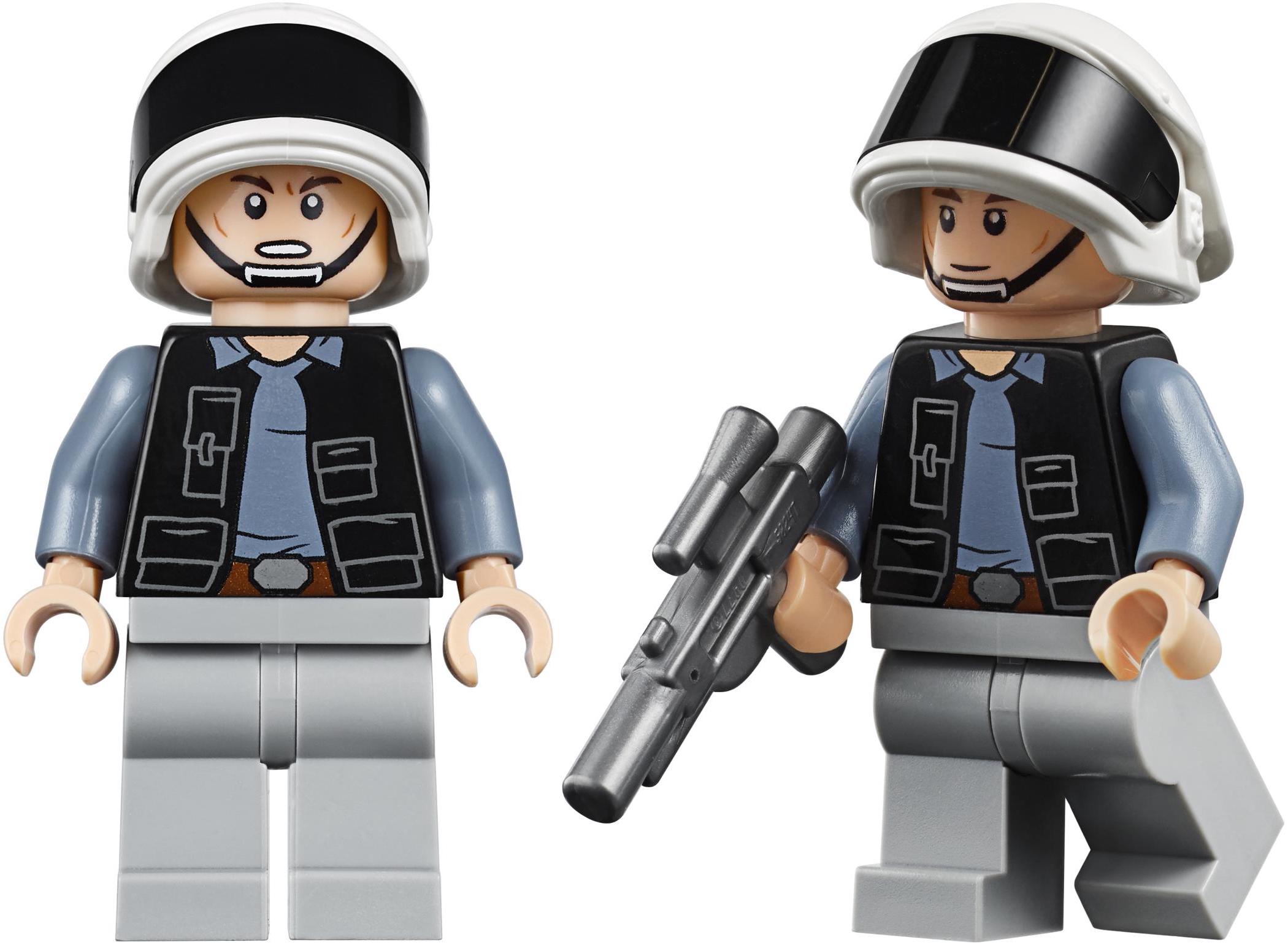 The fourth minifigure is a generic Rebel Fleet Trooper. This updated version of the trooper first appeared in 75237 TIE Fighter Attack and makes his second appearance here, and is still a great minifigure. He has his white helmet with the black visor, and a double-sided head (angry and slight smile). His torso has a black jacket with sand blue sleeves, and he has unprinted light grey legs. The Rebel Fleet Trooper is armed with a silver blaster. 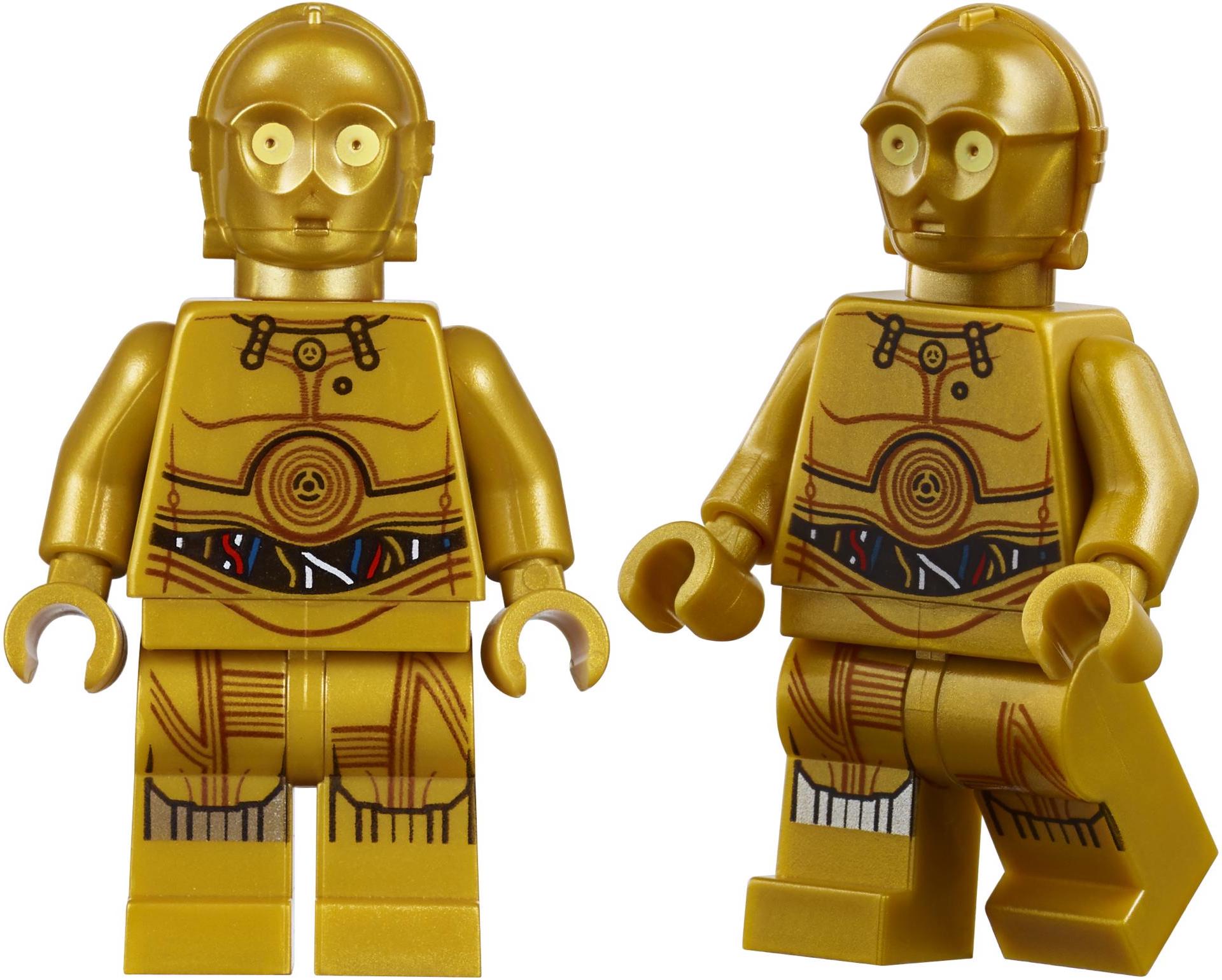 The next minifigure is the protocol droid C-3PO. This is the same C-3PO minifigure that we’ve gotten since 2016 and it’s kind of disappointing to see no new or upgraded printing has been given to him in such a big set. He has a printed head, printed torso, and printed legs, but no accessories. 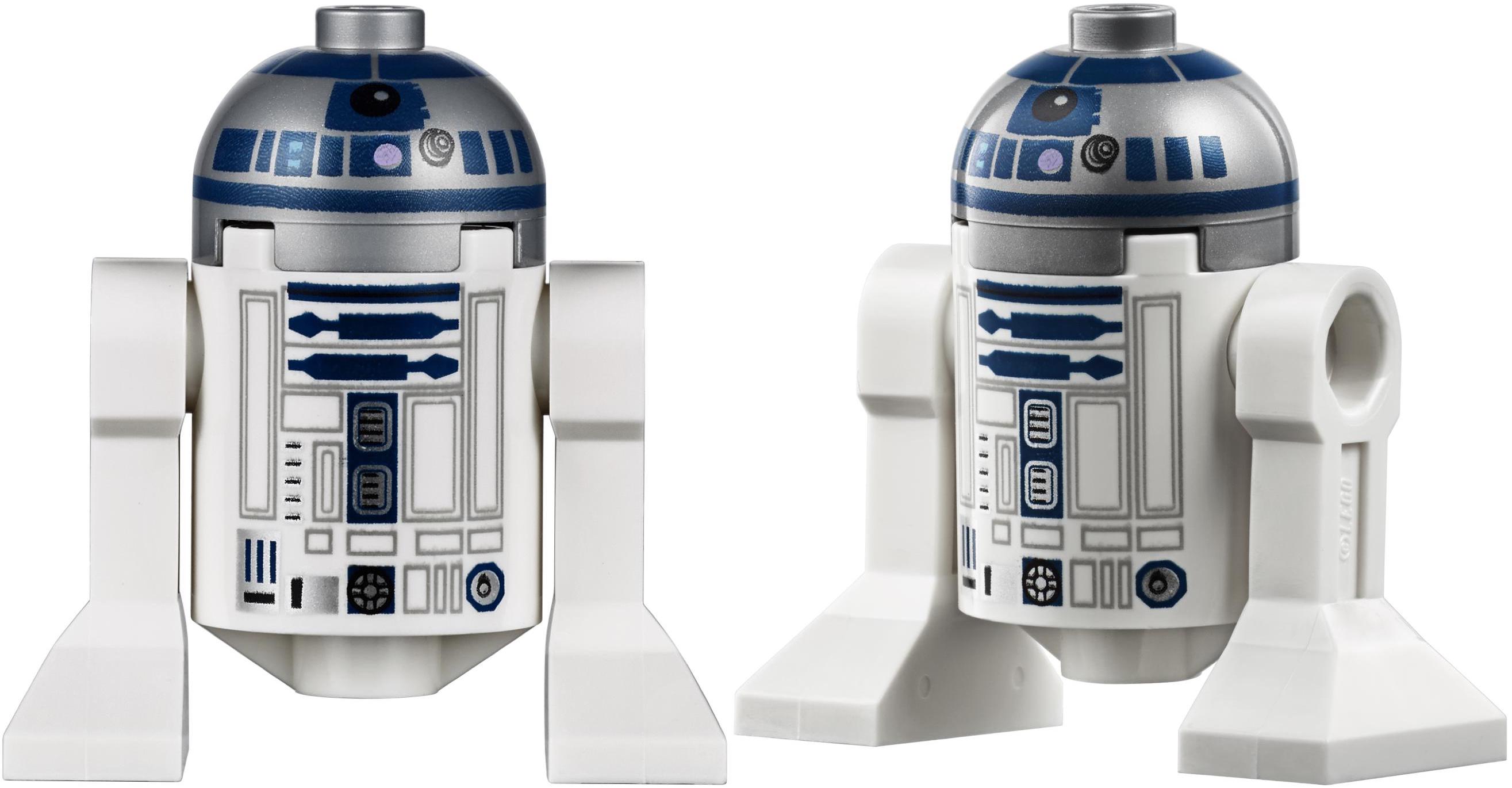 On the whole, I think this minifigure lineup is good. Leia and Bail Organa are the standouts, Captain Antilles and the Fleet Trooper are good inclusions, while C-3PO and R2-D2 are boring but necessary inclusions. If I had to suggest any improvement, one more Rebel Fleet Trooper would have been nice, but as it is, the figure selection is good enough.

Now we move on to the builds of the set. The build in this set is the eponymous Tantive IV, which was seen bursting onto screens in 1977 on Star Wars: A New Hope. This is the third time Tantive IV has been recreated full-size in LEGO, which is surprising given its iconic status. This new LEGO Tantive IV measures a whopping 62 cm long, 19 cm wide, and 14 cm tall. It has the iconic white and dark red color scheme fully recognized in LEGO style. 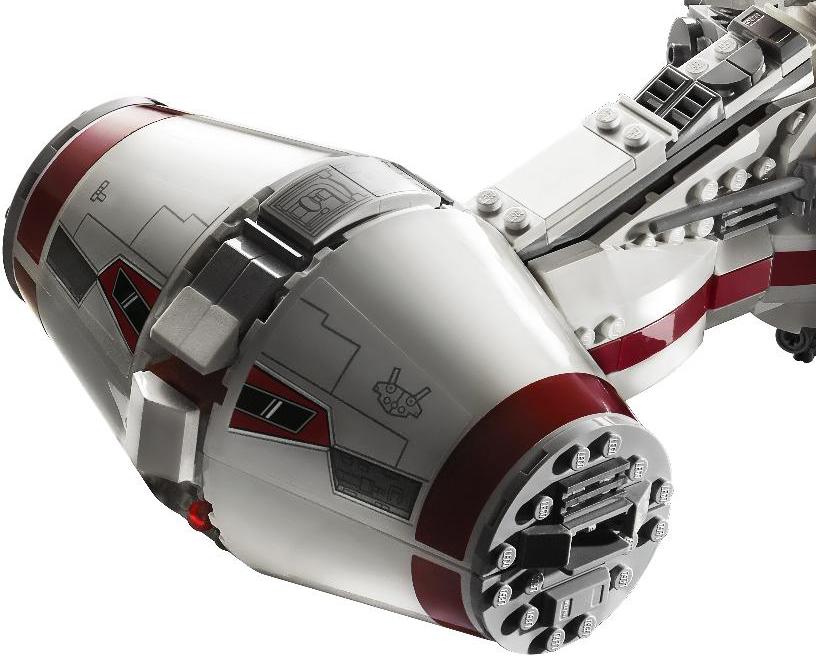 The cockpit uses the new large half cone pieces that first appeared in 70616 Ice Tank in white here. These have stickers on the front for most of their detail, but it seems like the dark red band at the top is printed. I personally don’t mind the stickers too much but it would have been better if they were printed, or even better if you could actually see inside the ship. The sides of the cockpit have basic brick-built detail, and there is actually a pair of spring-loaded shooters at the bottom of the cockpit. These fire out translucent red bolts. 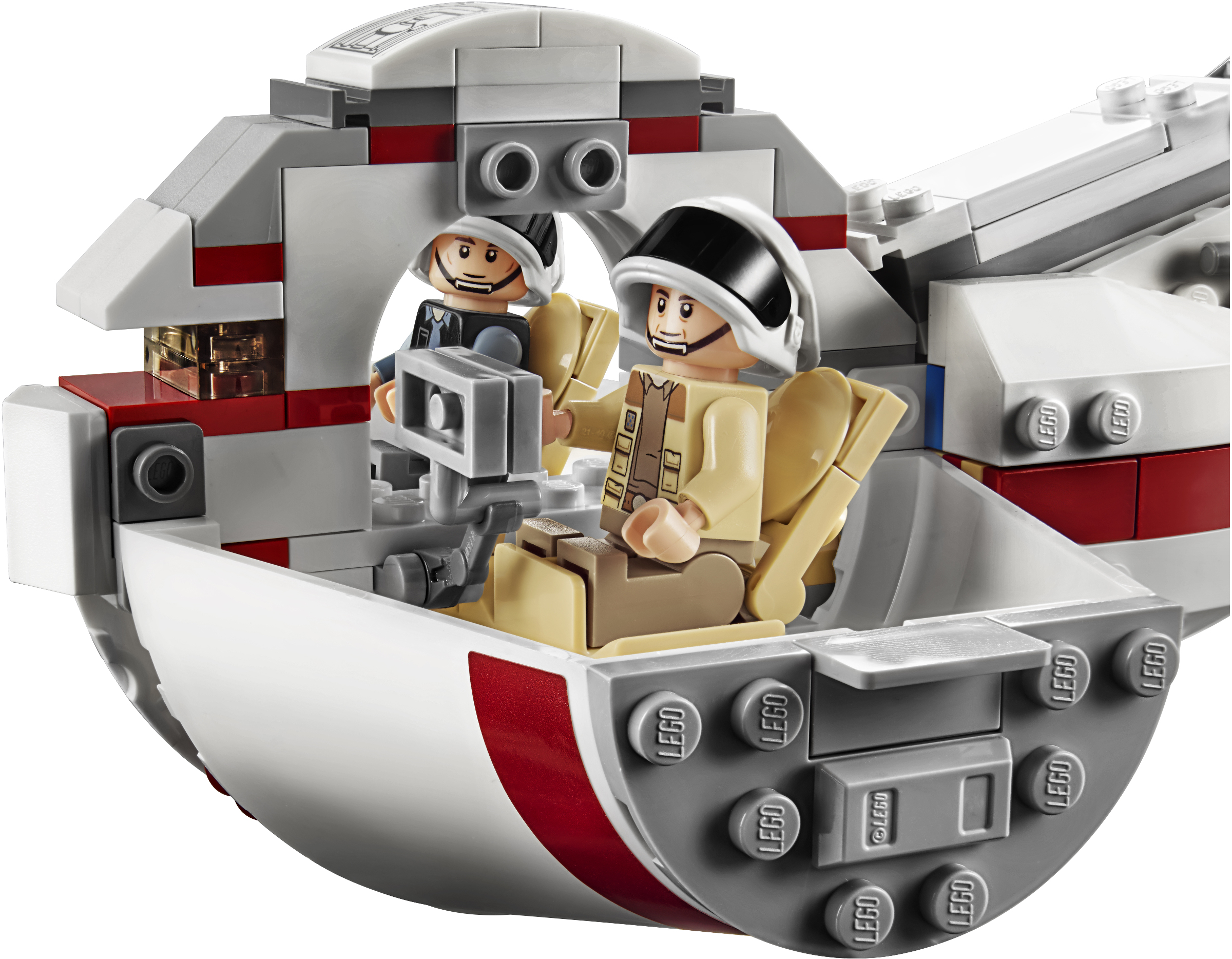 The top half of the cockpit can be removed to give you access to the interior. There are two seats inside for minifigures and I really like how these are built. From the tan seat coloring with hinging backrests to the way that the console is hinged out in front of the minifigure, it’s just an awesome look overall. 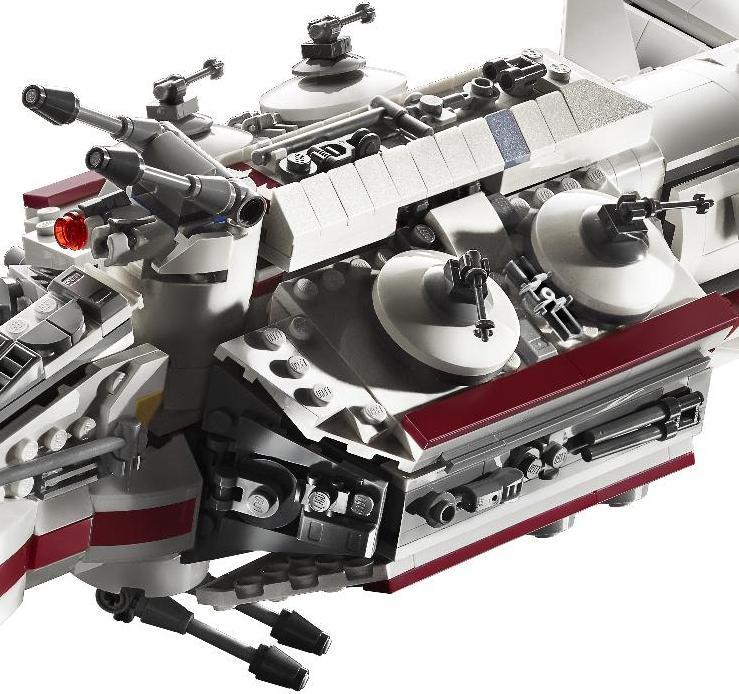 Behind the cockpit is the main middle section of the Tantive IV. This area has a narrower section at the start with two larger turrets. There’s also the classic sloping sides with a bunch of greebling at the top and sides that looks great. I like the use of minifigure ski poles for cannons and how caterpillar treads are used upside-down for greebling detail. 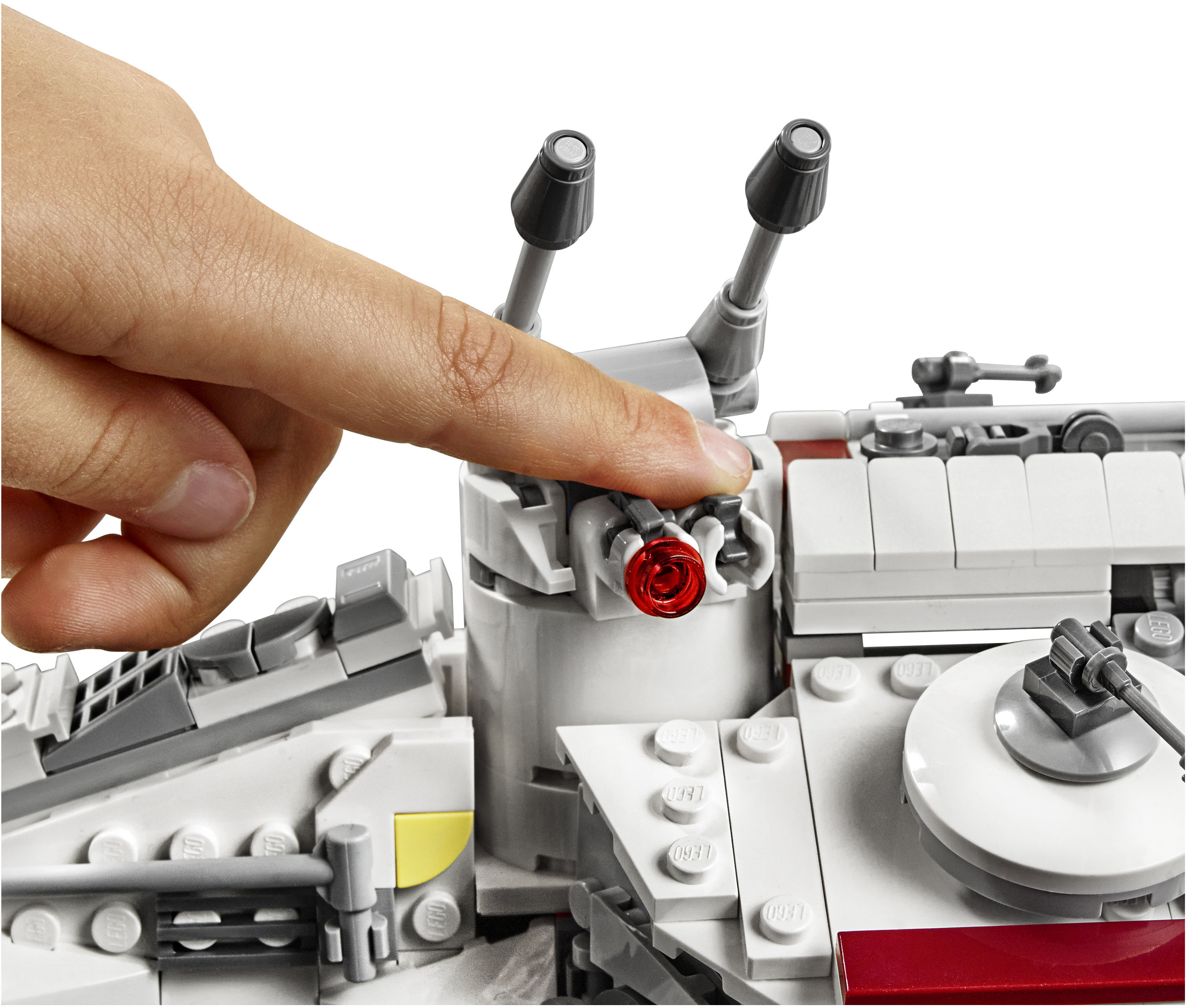 The large turrets can rotate and the upper turret has a pair of stud shooters on it. You can press the trigger to fire off translucent red studs. The faux cannons can also hinge up and down on the bigger turrets. 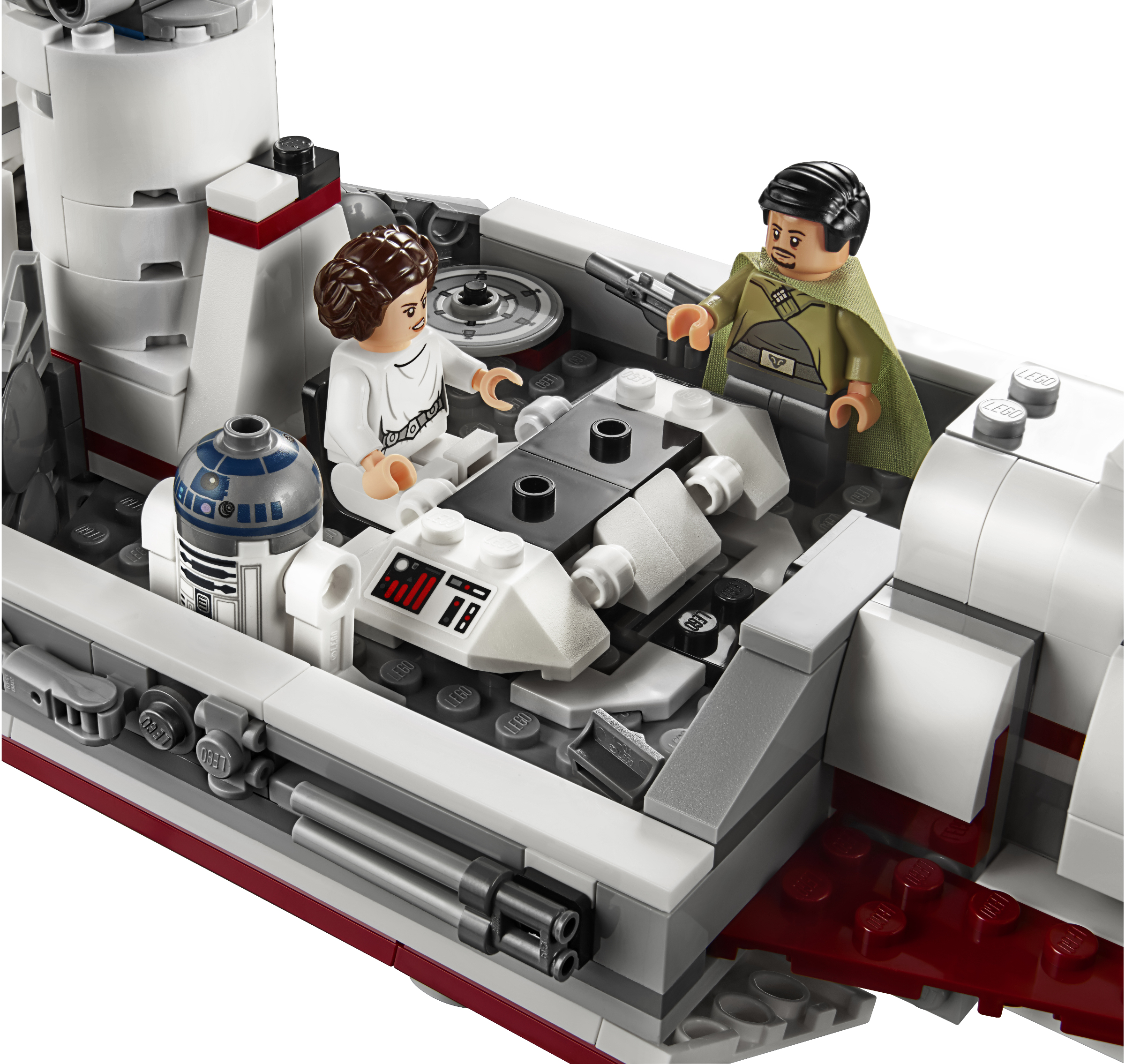 You can also remove the roof section of this part of the Tantive IV to access the interior! Unfortunately this interior section is very small but better to get some than none at all. There’s one seat for Princess Leia and some standing room around. There’s a white table with some stickered consoles and two black jumper plates in the middle of the room. There’s also what appears to be a stickered round table off to the side, plus a couple of clips for accessories. 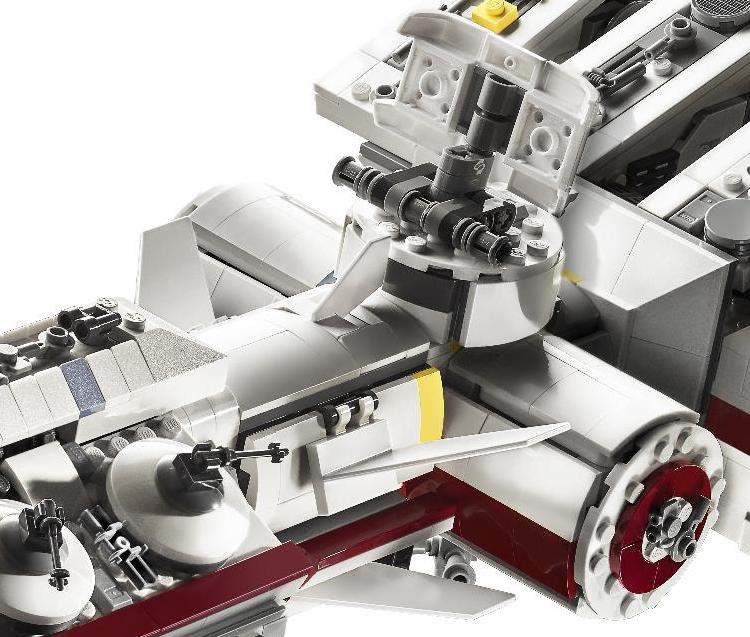 Slightly behind the middle section is this narrower round corridor section which leads to the escape pods. It’s simple but I like how the round exterior is built up. There’s also the Tantive IV’s satellite array here, and I particularly like how the curved satellite design is built in LEGO. 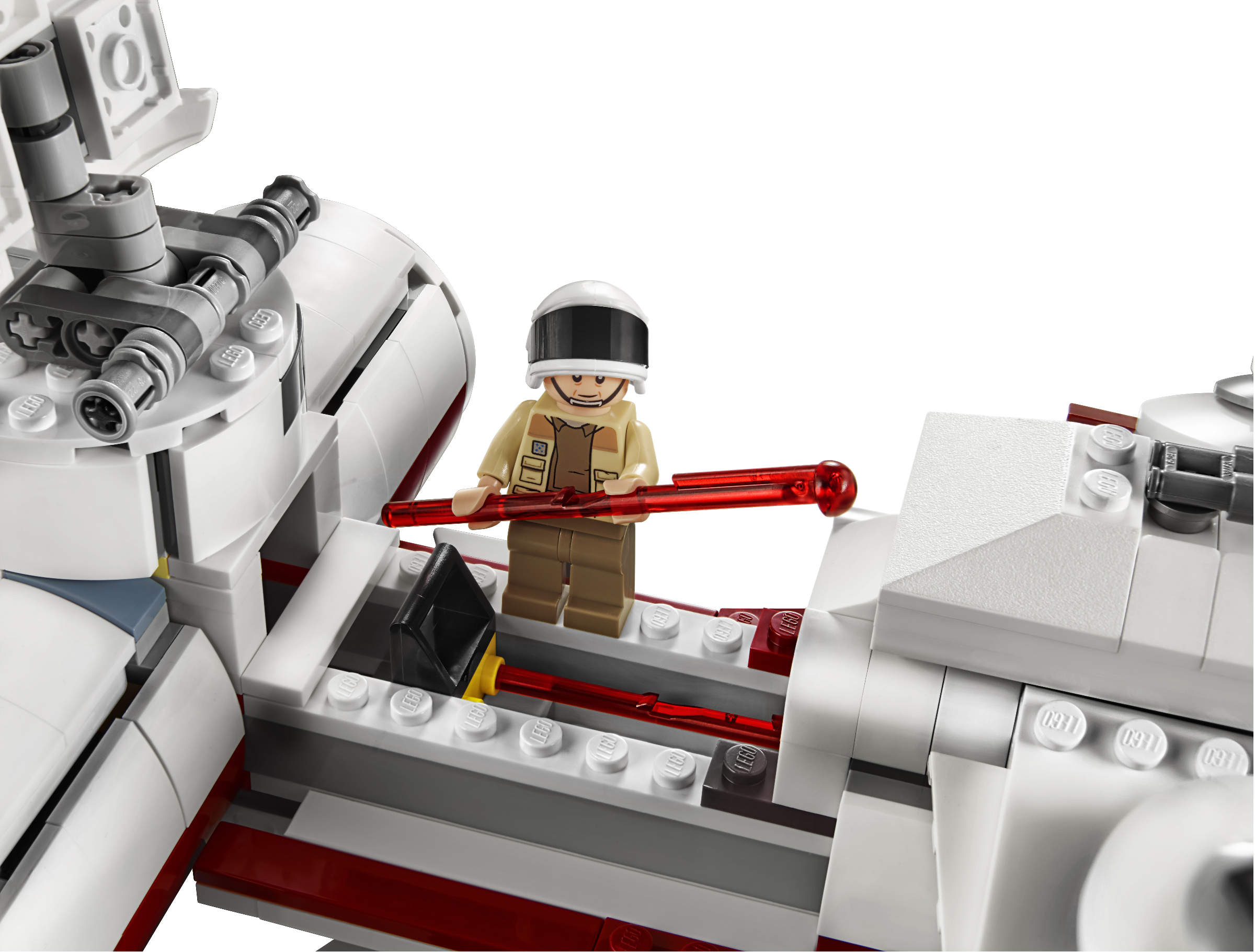 This narrow corridor section can also have its top removed. There’s a simple assembly that can be placed here which stores the extra spring-loaded shooter missiles. 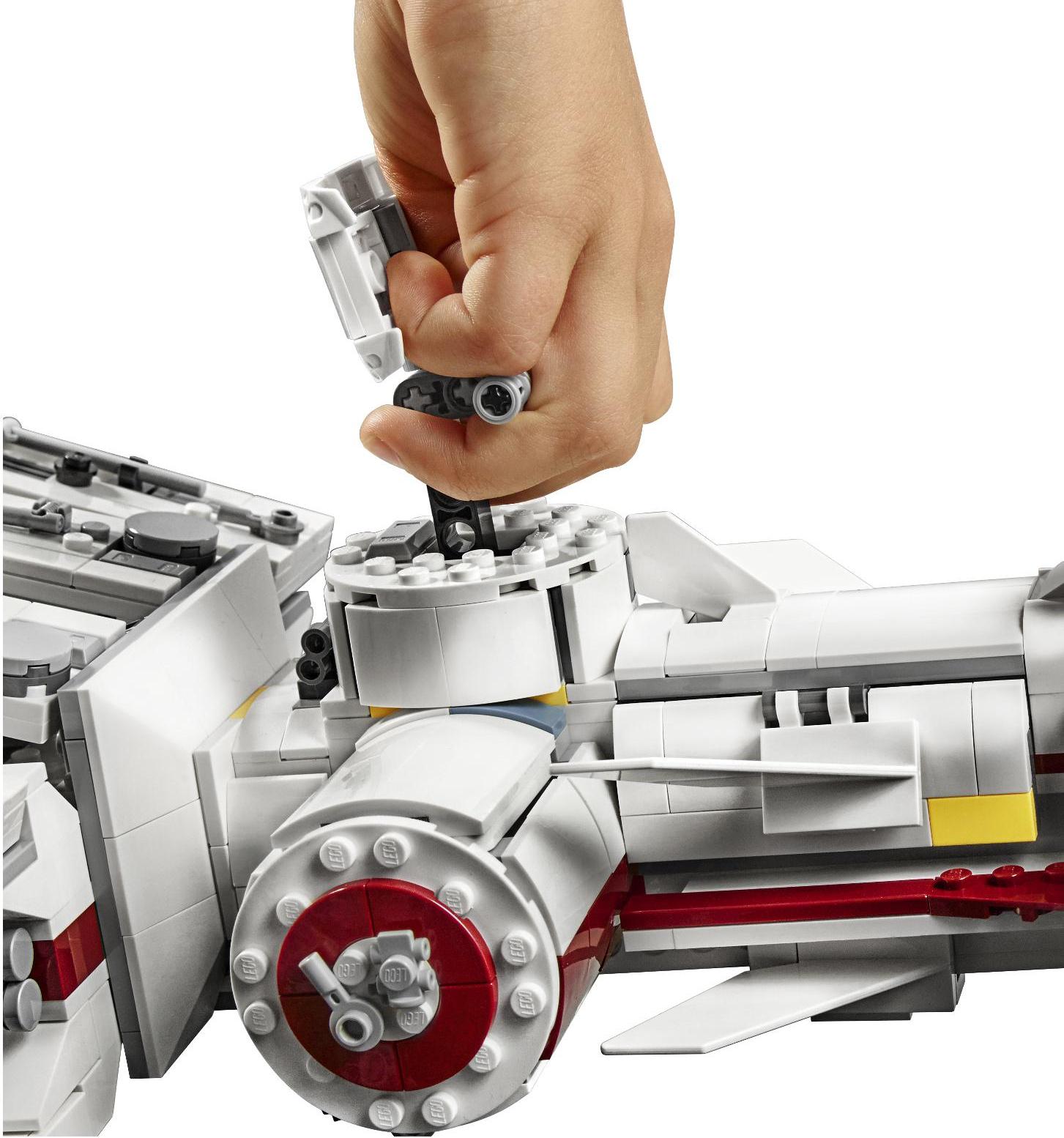 In an awesome twist, the satellite array also doubles as a carrying Technic handle! I love handles on large, heavy LEGO ships and this is no exception. It’s even more awesome when you realize that this handle integrates perfectly with the rest of the build when not in use. 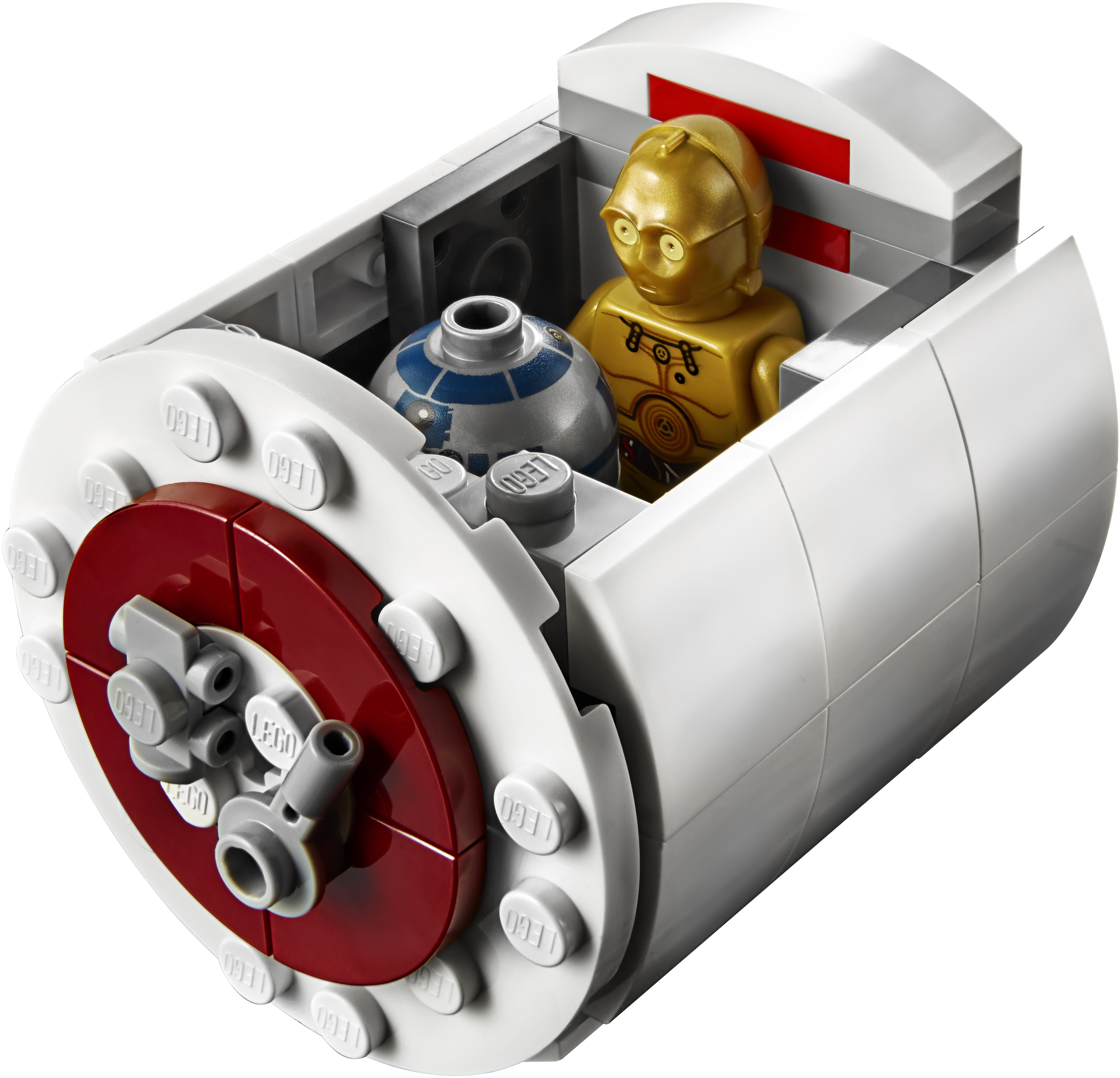 Another great part about this section is that both escape pods are detachable, meaning you can recreate C-3PO and R2-D2’s escape from the Tantive IV. The tops of the pods are removable and you can fit both Threepio and Artoo inside. The interior is relatively devoid of detail but at this scale you can’t really expect more. 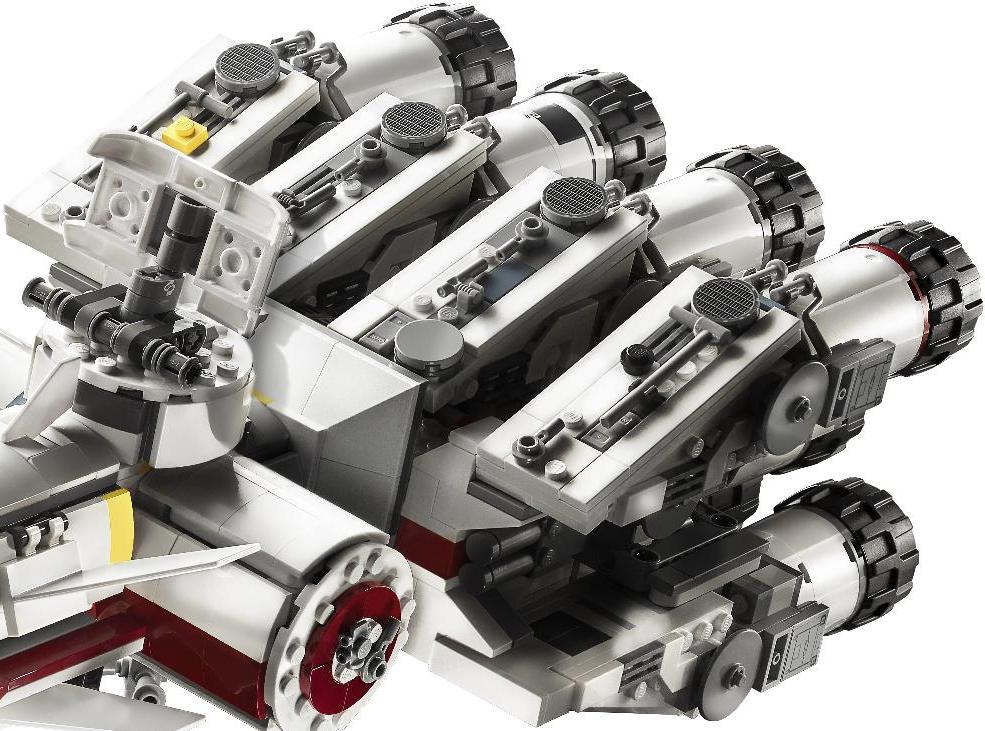 Finally, the back of the LEGO Tantive IV is the iconic engine section and this area is one of my favorite sections of the build. The sheer amount of detail here is really great despite not being too complex, and I love how it manages to look bulky, messy, and sleek all at the same time. 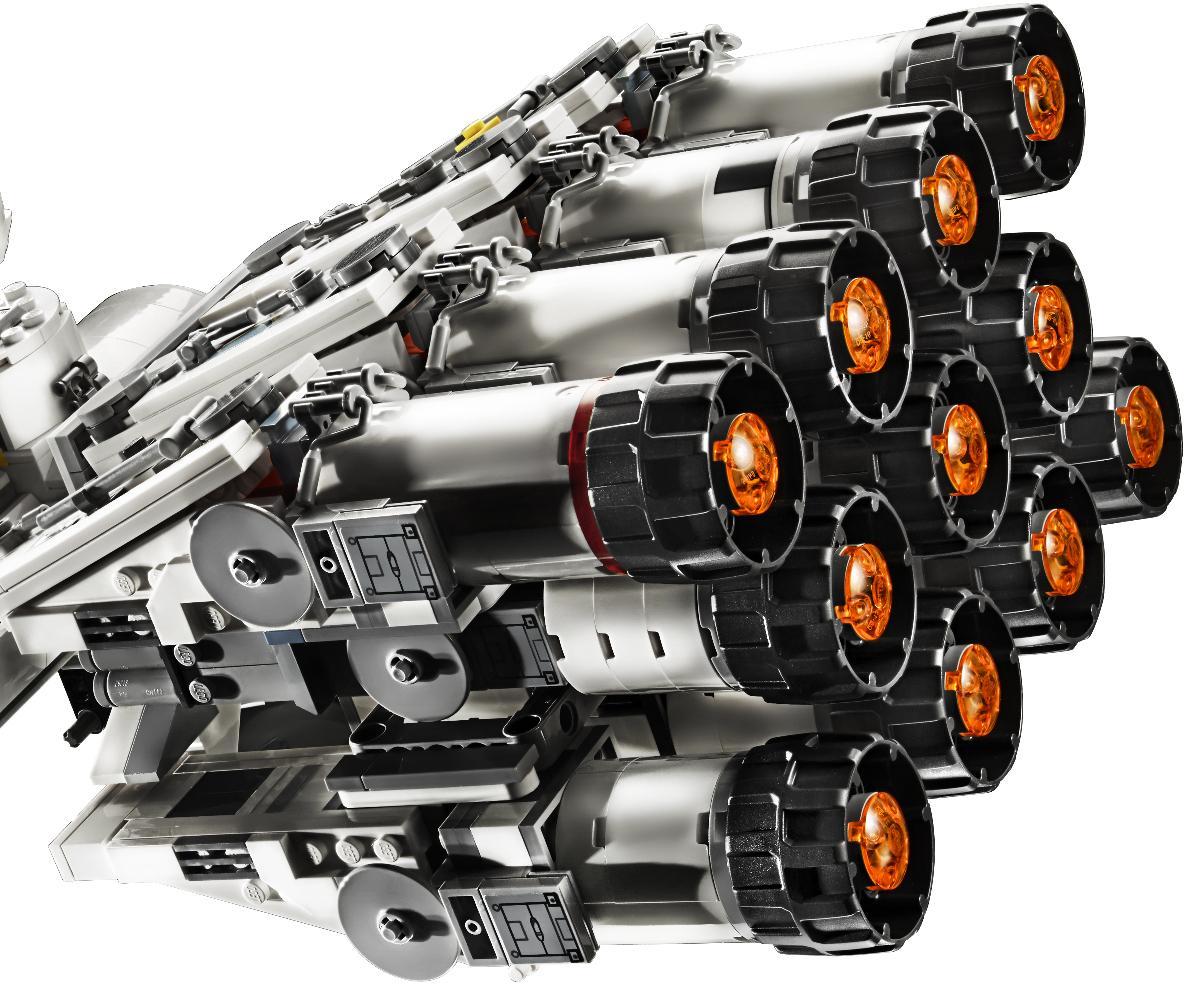 Just look at that – isn’t that gorgeous?! All eleven engines in their full glory – I particularly love how the translucent orange glow contrasts with the gunmetal grey wheels around them. I’m not sure I 100% agree with the choice of wheel piece here but the color scheme is nearly flawless. This area is an iconic, defining area of the Tantive IV and I’m really glad that LEGO has truly done justice to it in this set. 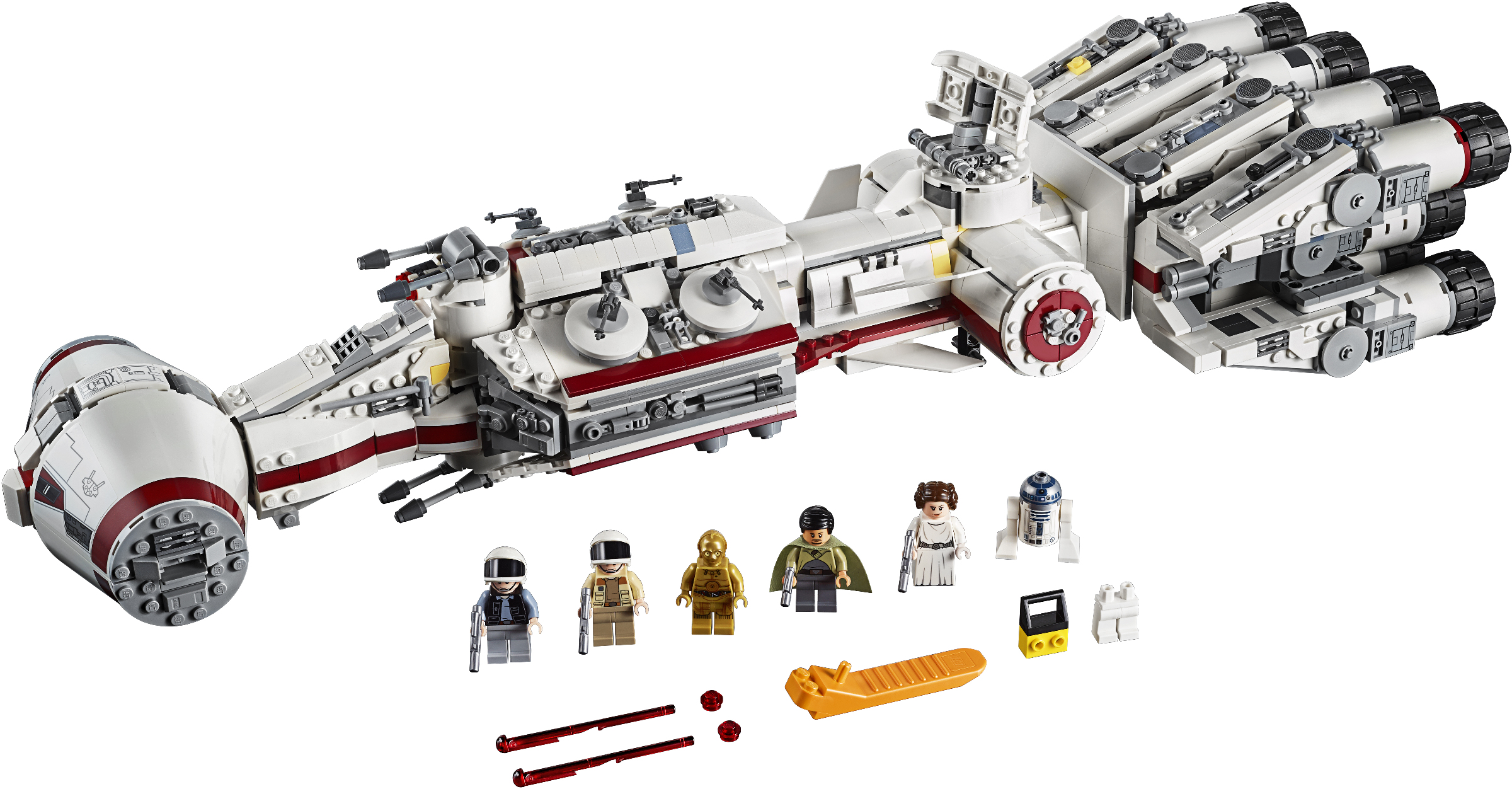 That’s it for my pre-review of this set! I apologise if I came across as overly positive, but I do think this set has been done well and I want to praise LEGO designers when they do sets well – which sadly seems to be less and less nowadays. The level of detail and attention to detail across the model is great and I think all six minifigures included are good too.

Unfortunately, we have to talk about the price. Disappointingly, I feel this set is still on the expensive side, like most LEGO Star Wars sets nowadays. I can understand the pricing reason behind and it’s not wholly outrageous, but I feel like the price is a lot of money to drop on this build and I personally think there are a lot of other very strong sets at this price point. I would have liked to see it at a slightly lower price, especially in the U.S., Australia, and New Zealand.

But that’s all for today! Thank you very much for reading, let me know your thoughts in the comments section down below!