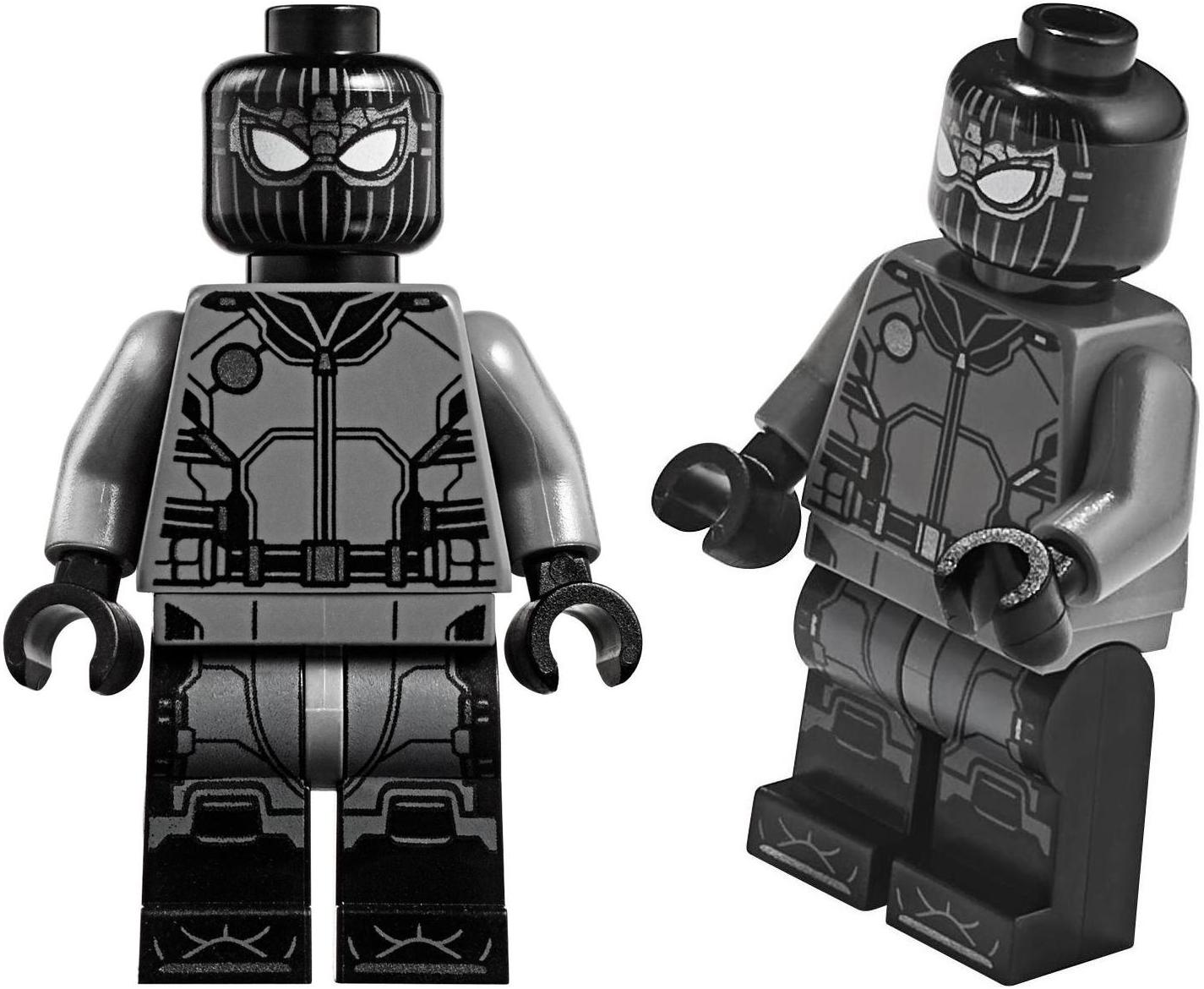 The first minifigure in the set is the exclusive Stealth Suit Spider-Man minifigure, and wow this figure is pretty great. It has a black and dark grey color scheme for a stealthy style. Some have said the colors are inaccurate but the stealth suit Spider-Man in the movie does have a dark grey-colored chest section, though the dimly lit shots make it look black. Personally, I think either way looks fine. Spider-Man has new printing for the head which looks good (especially the printed flip-open goggles), along with some really nice armour detail on the torso and the legs. He even has toe printing! I’m really happy to see LEGO Marvel minifigures getting leg printing again – I just wish we got better minifigures in the LEGO Avengers Endgame sets. 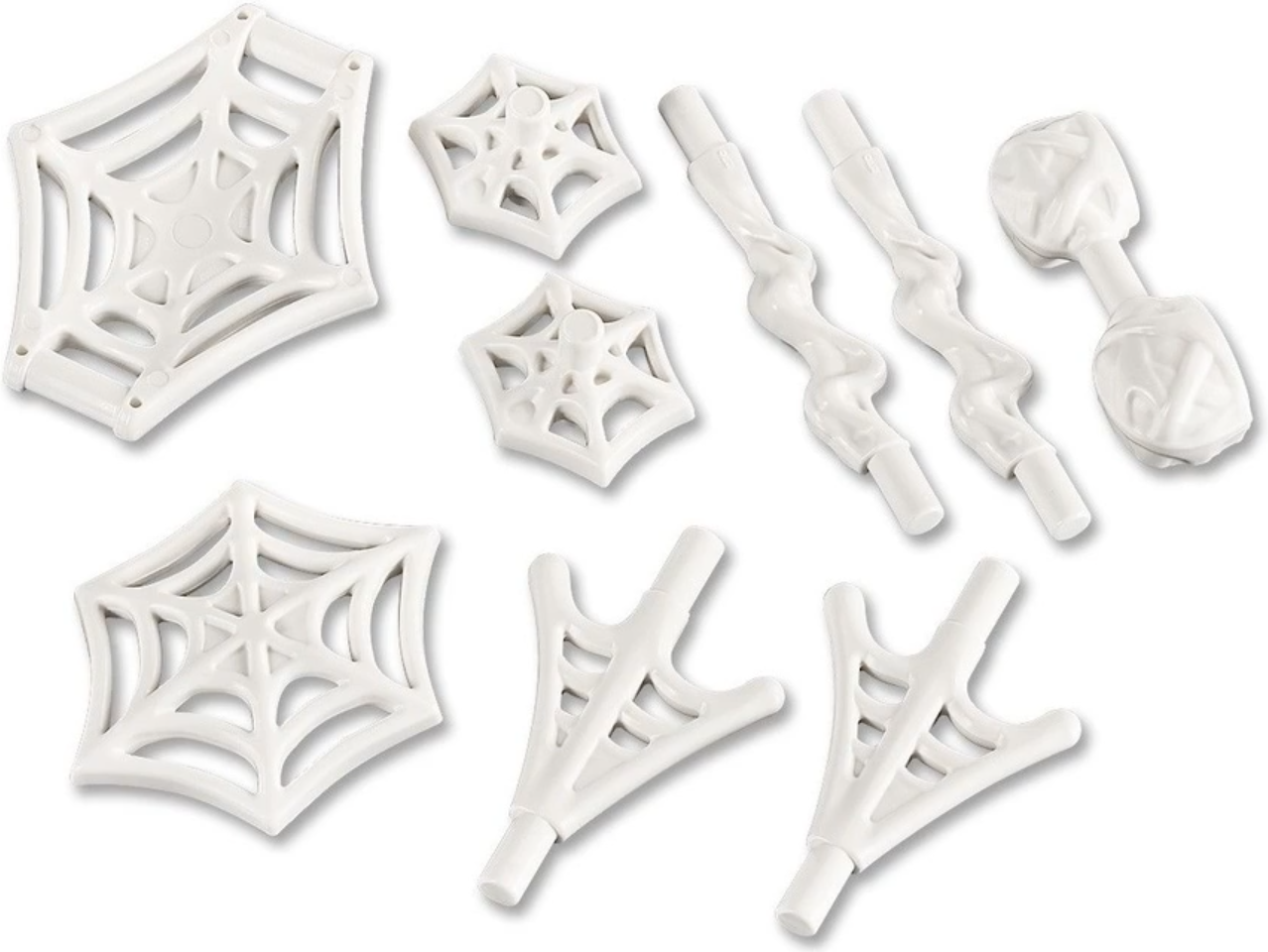 Spider-Man’s accessories are his white web blast pieces. These web blast pieces were first introduced in the 2019 LEGO Spider-Man sets and are web versions of the Power Burst. They come as a group in their own mini pack. There’s two large web shields, two small web splats, two triangular web blasts, two straight web blasts, and a pair of web handcuffs. 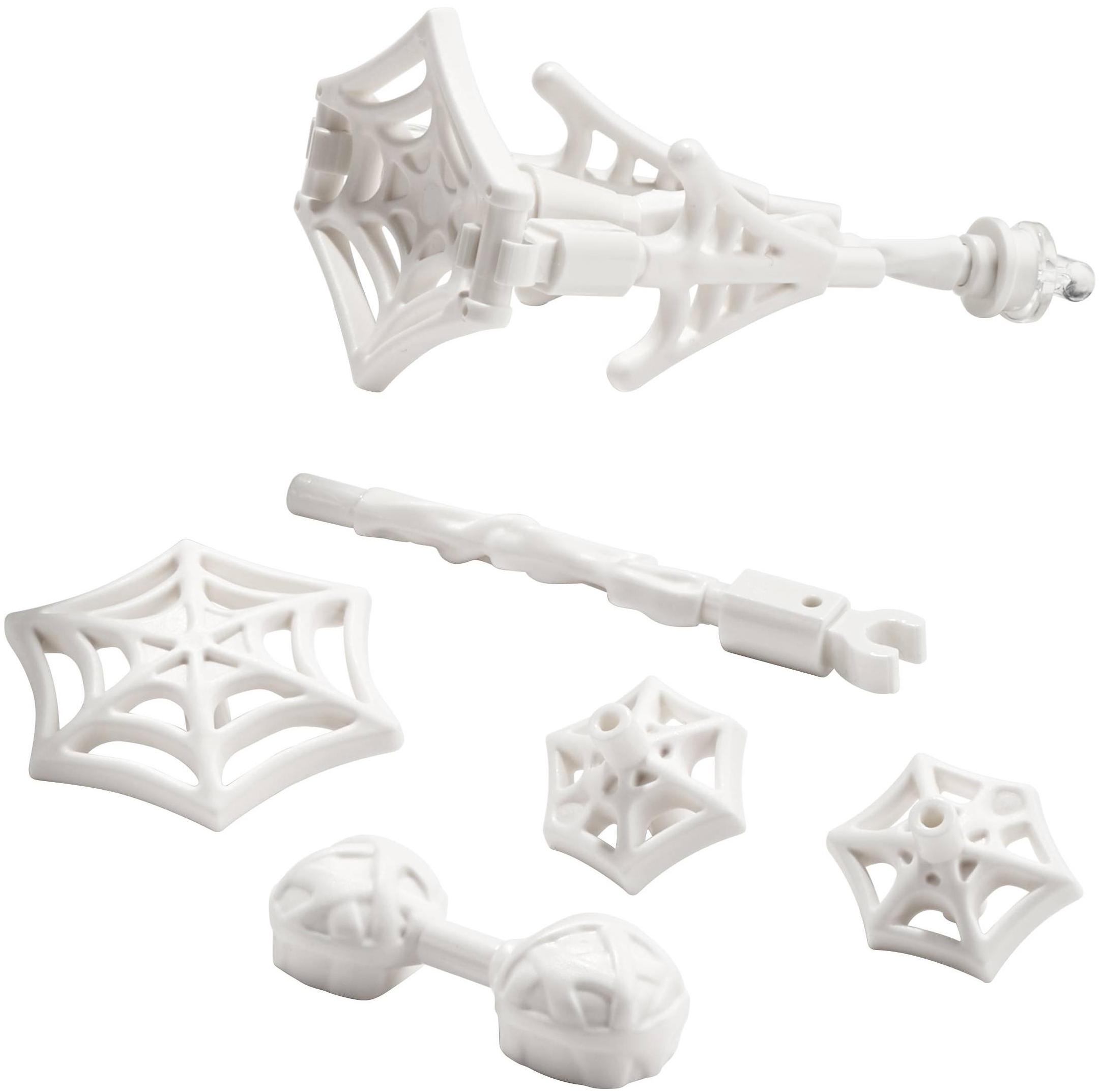 The set comes with a few extra white pieces and the instructions tell you to assemble the webs like this. This creates a long straight web blast that can clip onto things, plus a large web blast which uses four of the web pieces. 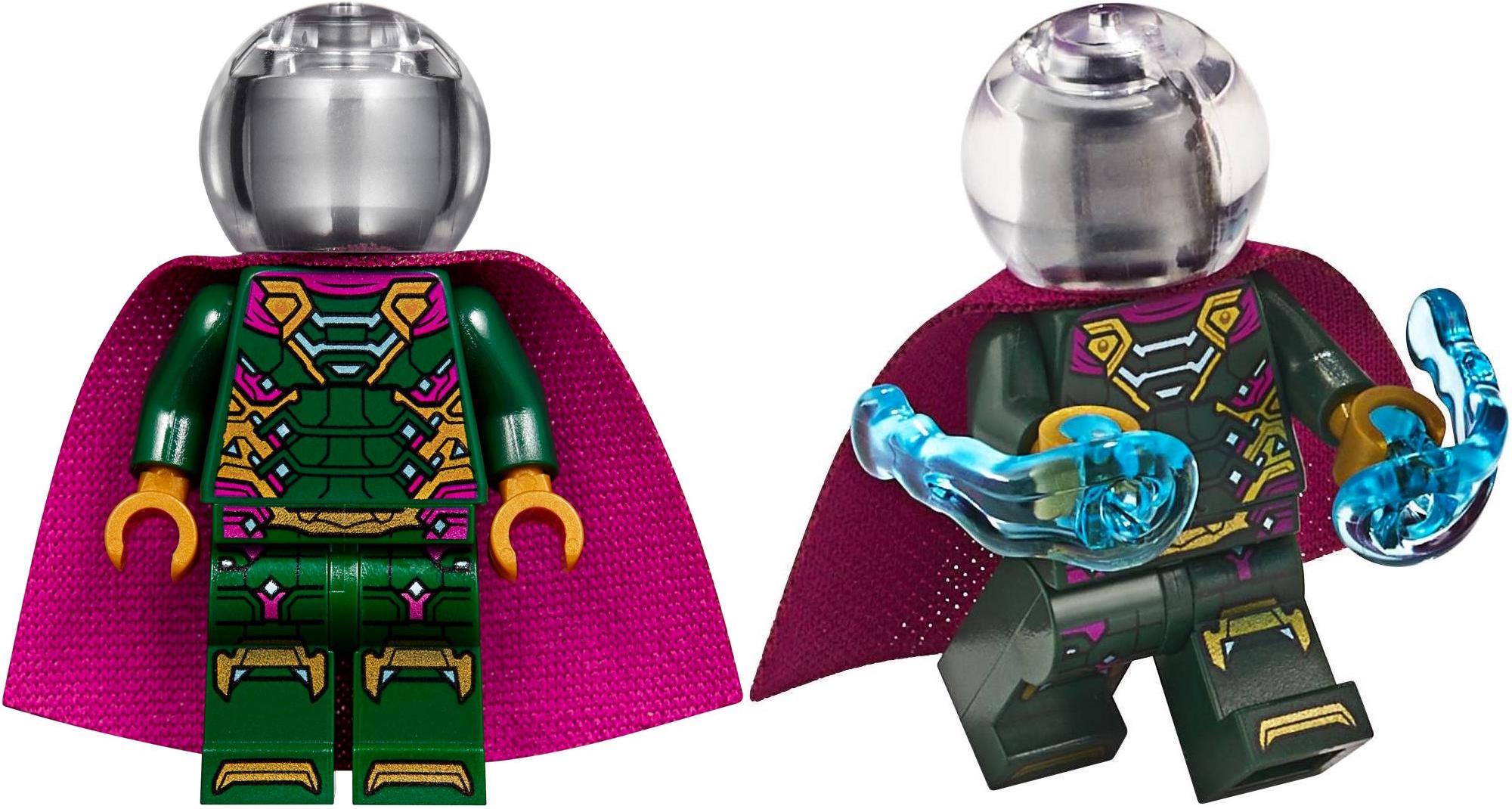 The second minifigure in the set is Jake Gyllenhaal’s Mysterio. This minifigure is not exclusive, and actually appears in all three LEGO Spider-Man Far From Home sets! However, it’s still a fantastic minifigure. Mysterio has a new clear bubble helmet mold which is placed over a silver minifigure head – there’s no face print underneath. He has a dark pink colored cape which looks great, along with predominantly dark green body armor. This is inaccurate as Mysterio has a golden chestplate in the movie, but I still love how this minifigure looks. It’s worth pointing out that this minifigure is actually fairly accurate to the comics design, which has a dark grey body and pink cape. It’s great to get torso and leg printing, yet again. Mysterio has golden minifigure hands and is armed with two trans light blue Power Blasts. Personally, I think trans light green would have worked better as Mysterio’s powers in the movie are green. 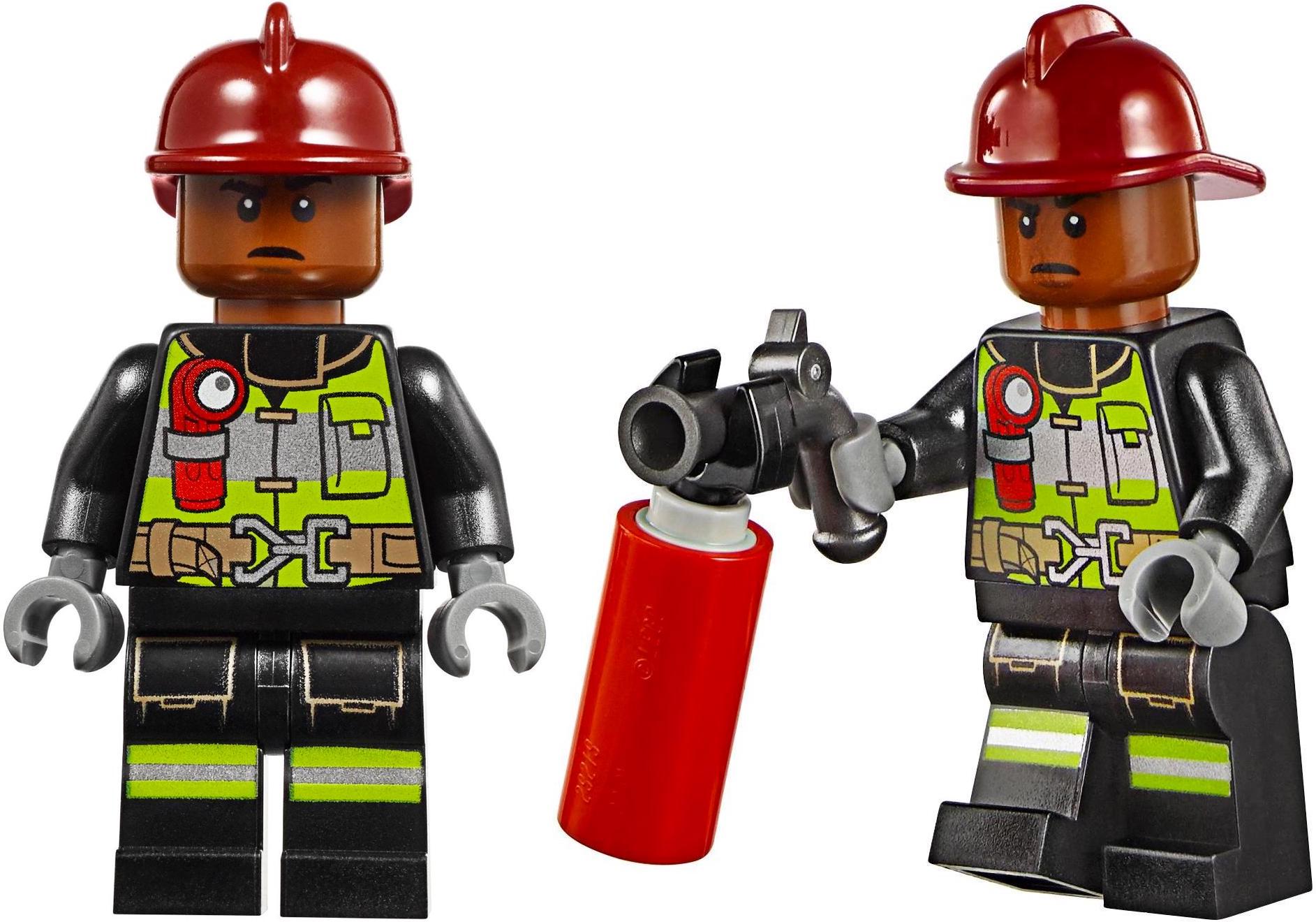 The final minifigure of the set is a fireman. This fireman seems determined to extinguish the fiery Molten Man, though I doubt that will go well! He has a dark red firefighter helmet and a slightly disgruntled face print which was previously used for a previous LEGO Spider-Man villain – The Shocker. He wears a black firefighting outfit with lime green printing, and this outfit is actually reused from the LEGO City line! He comes with a new design of a brick-built fire extinguisher which looks great – it has a gunmetal grey flintlock pistol piece at the top with a red Technic pin connector attached to the bottom. It looks good, though is slightly oversized. Maybe this is the man who is responsible for all the LEGO fire extinguishers placed throughout numerous LEGO Marvel Superheroes sets over the years? (It’s pretty crazy to think that this is the 19th LEGO Marvel Superheroes set that comes with a fire extinguisher). 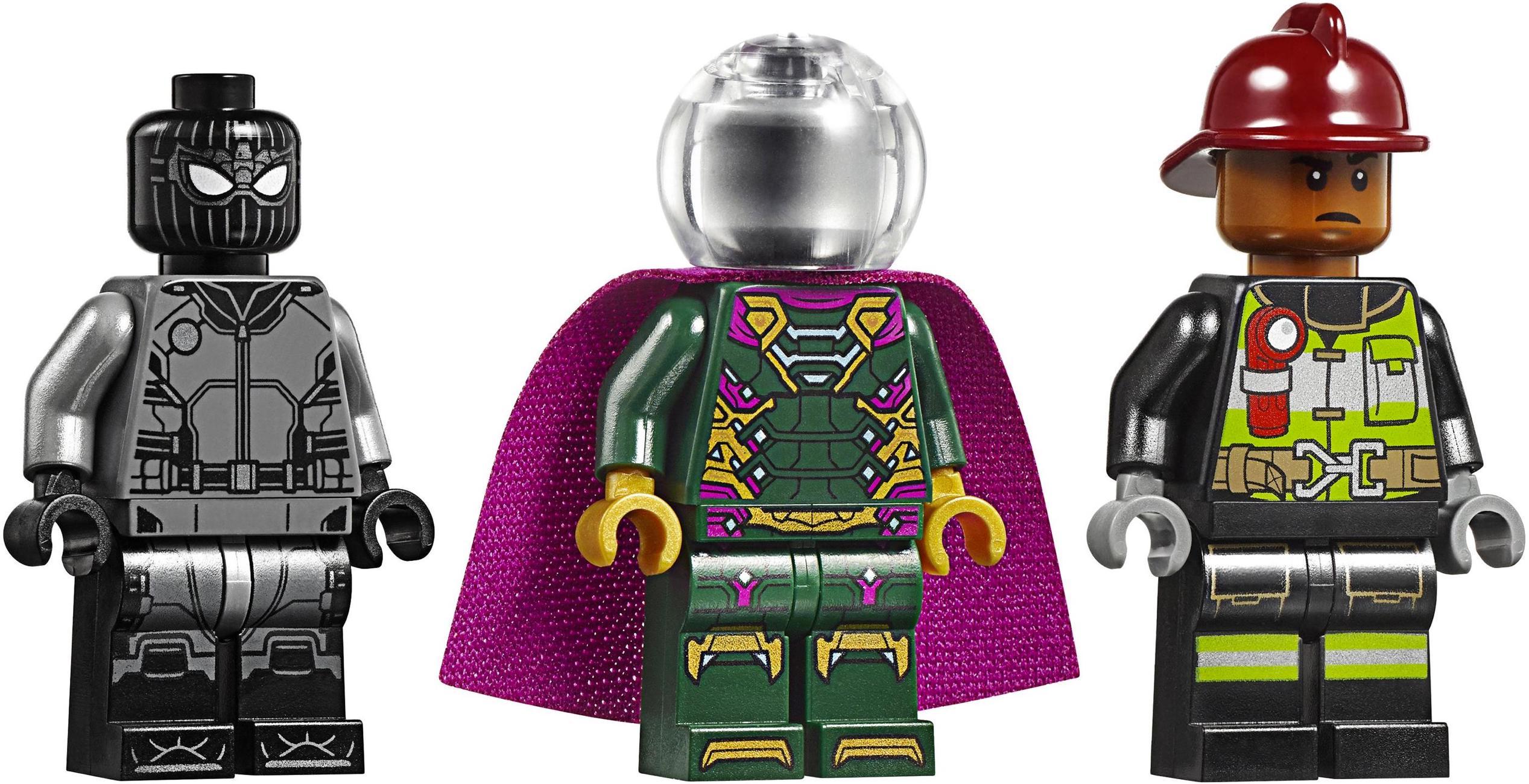 On the whole, I think the minifigure selection in this set is pretty good. Stealth Suit Spider-Man is obviously a huge draw, and is a fantastic exclusive minifigure – one of my favorites from the LEGO Spider-Man Far From Home line. Mysterio is a good minifigure despite not being exclusive, and this is the cheapest set to get him. The fireman is honestly kind of boring – I wish he had been replaced by someone like Ned (who’s never appeared in LEGO form before). That would make this minifigure selection REALLY good. 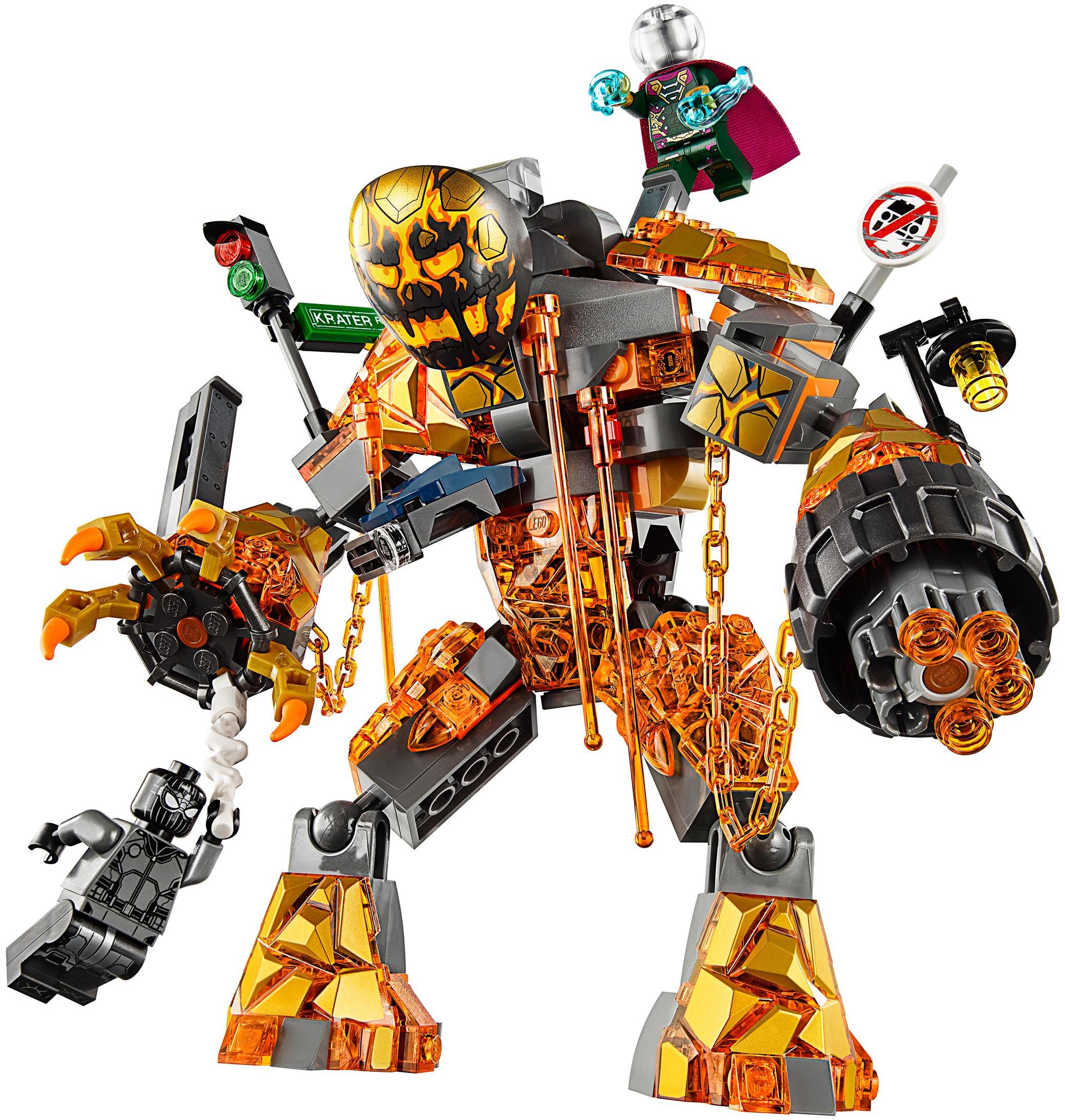 There’s only one build in the set, and it is a large brick-built Molten Man. He stands at around 18 cm tall and has a fiery orange design. 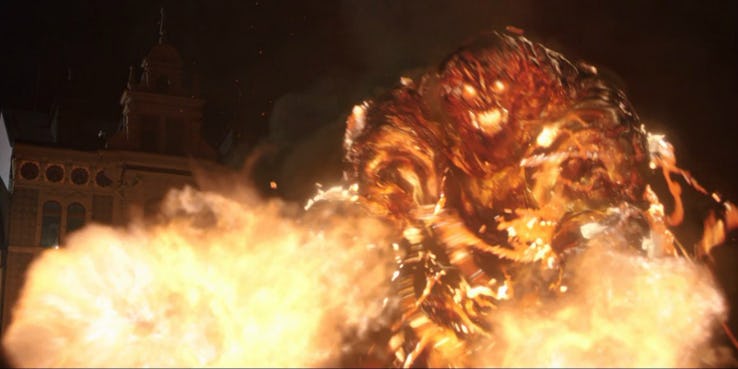 Here’s what Molten Man looks like in the movie. The LEGO version isn’t super accurate but you can definitely see what they were going for. 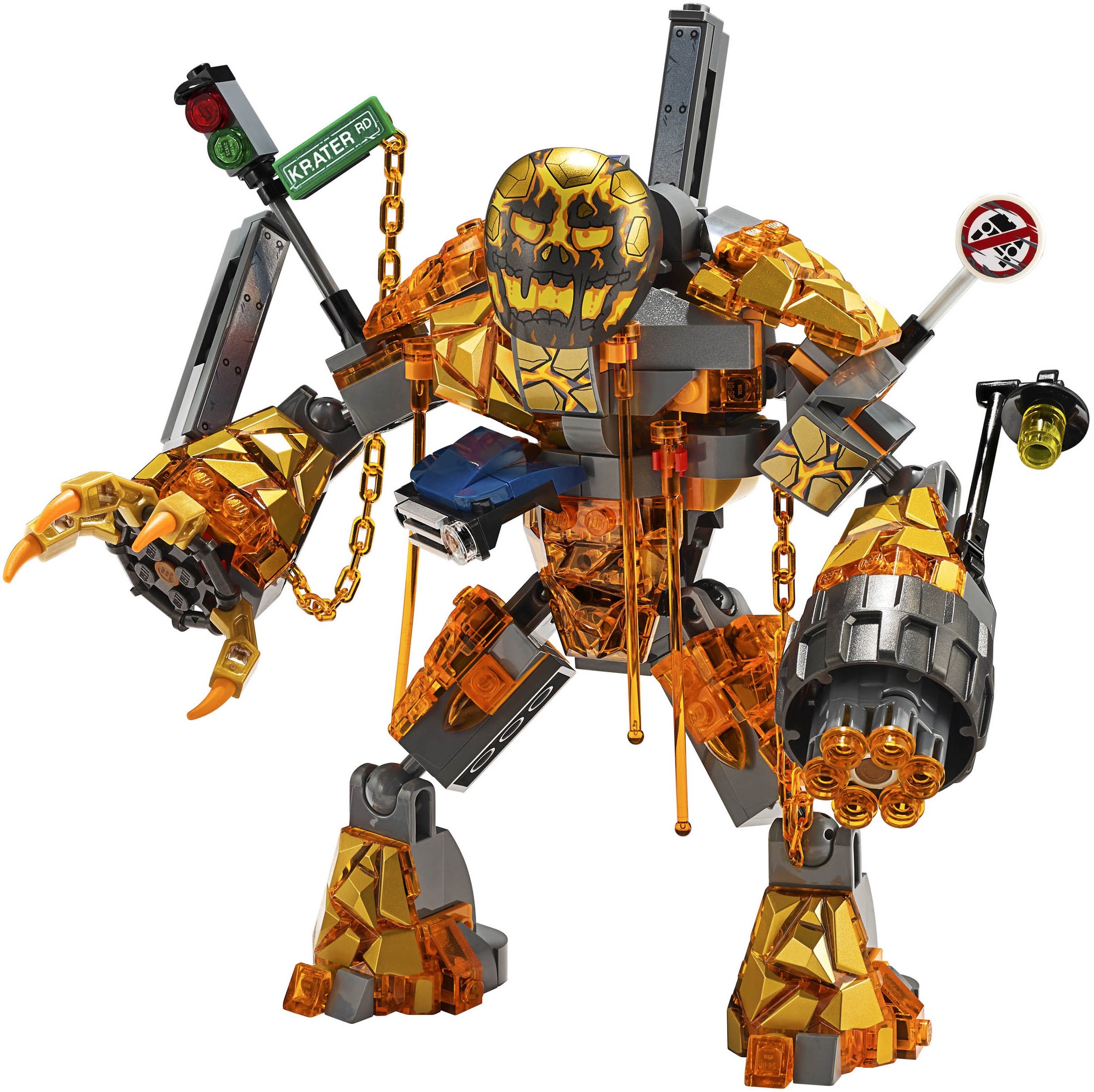 LEGO Molten Man is a pretty poseable build, with ball joints all over. Molten Man has ball joints at the hips, ankles, elbows, and shoulders. He has a printed constraction figure shoulder pad piece for his head, and it looks okay but I think a base color of something other than black would have worked a bit better. It just looks a bit cartoonish to me.

Molten Man has several translucent orange 4×4 wedge slopes used all over. Some of them even have gold printing on them to make them look even more flaming. The basic idea of the build is that Molten Man has emerged from the street, carrying along a bunch of stuff from the road. As such, he has brick-built details like a streetlight, a no parking sign, the dark blue front hood of a car, a traffic light with a street name “Krater Rd”, and a pair of street girders. All the details are stickered, and these builds are mounted on clips and mini ball joints so they can be posed around. 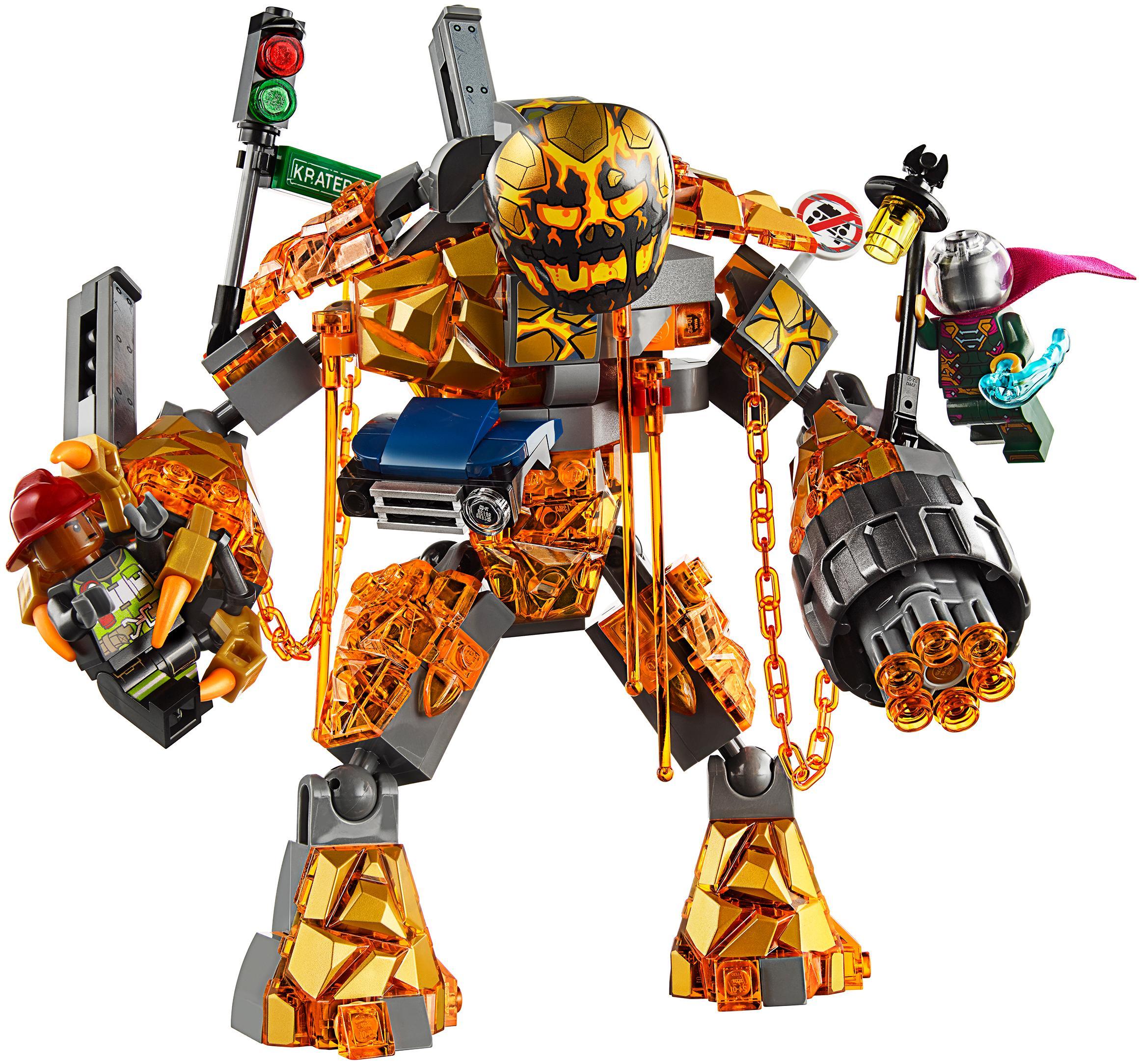 Molten Man still has a base color of dark grey, which I think was a good choice. The only other color I could see working is black, but it might have been too dark.

The build has translucent orange antenna and chain pieces clipped all over it. This gives a dripping lava effect that looks great, especially when combined with all the other trans orange pieces. 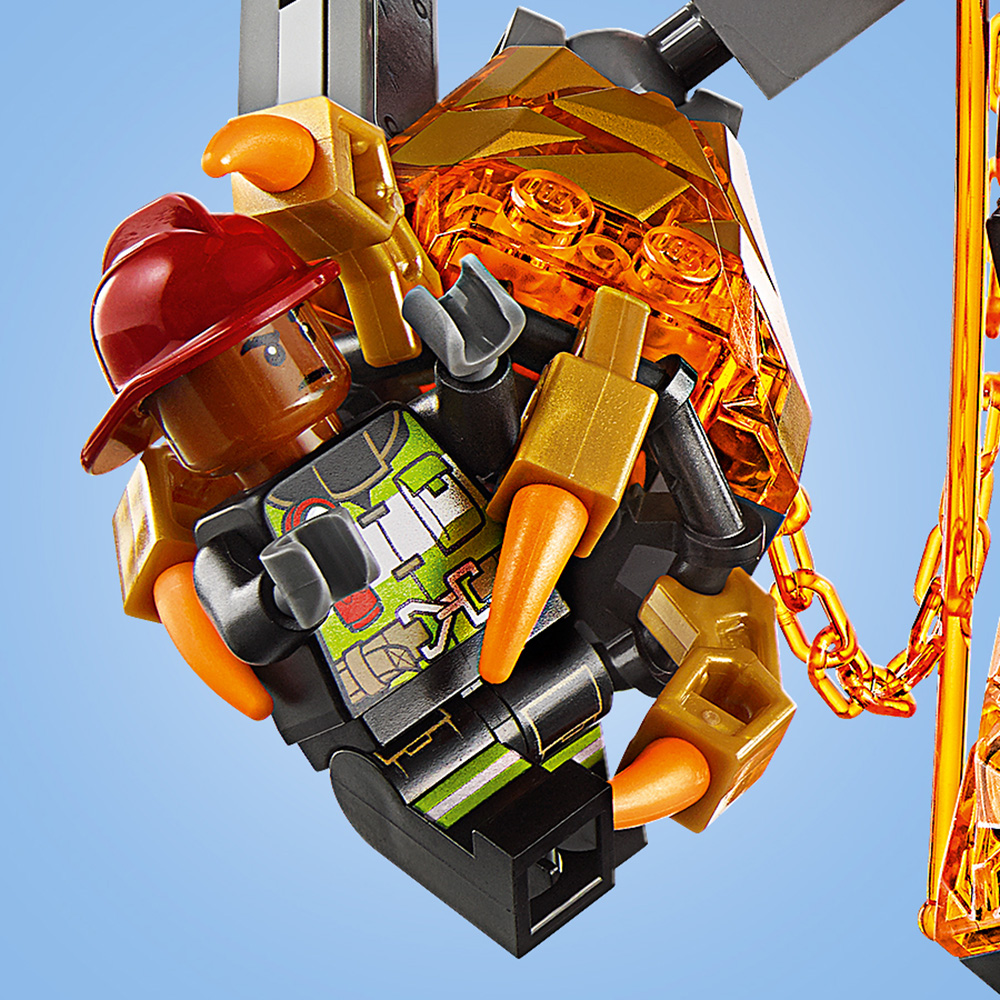 Molten Man’s right hand has a grabbing lava arm. It has a trans orange wedge slope piece for the lava effect, along with black, gold, and orange pieces to continue the flaming design. You can kind of grab a minifigure with this hand. 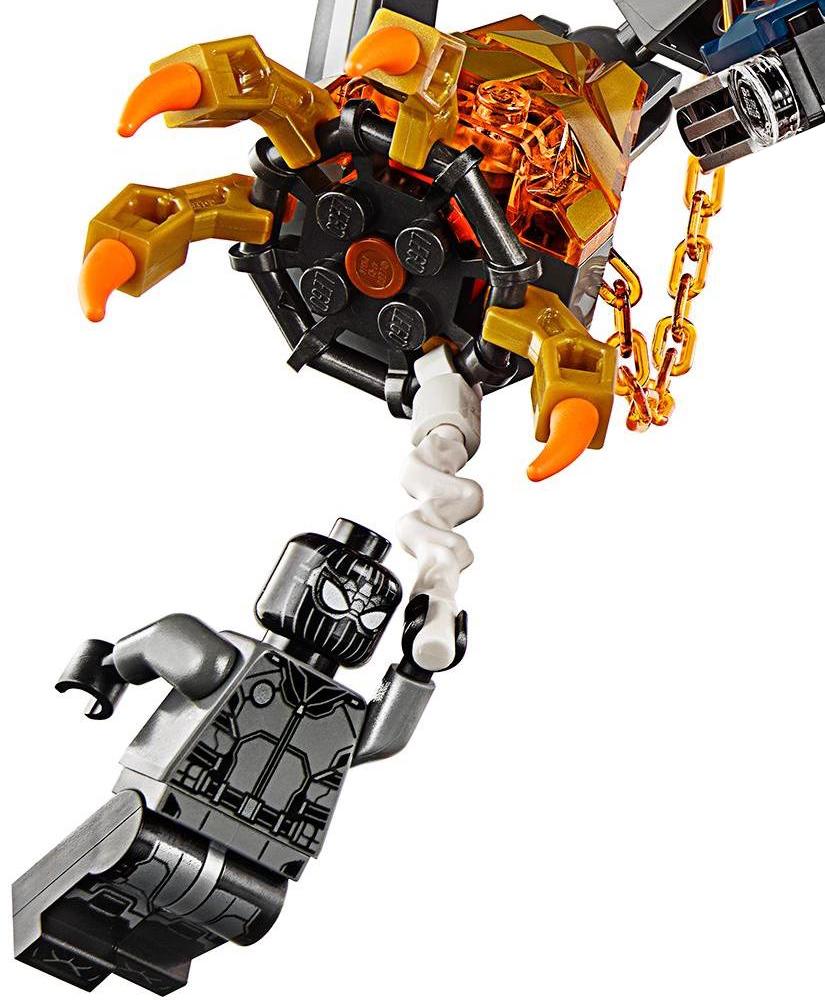 Alternatively, you can clip on Spider-Man and the web blast piece to let Spider-Man swing from Molten Man’s hand. Just watch out for the lava! 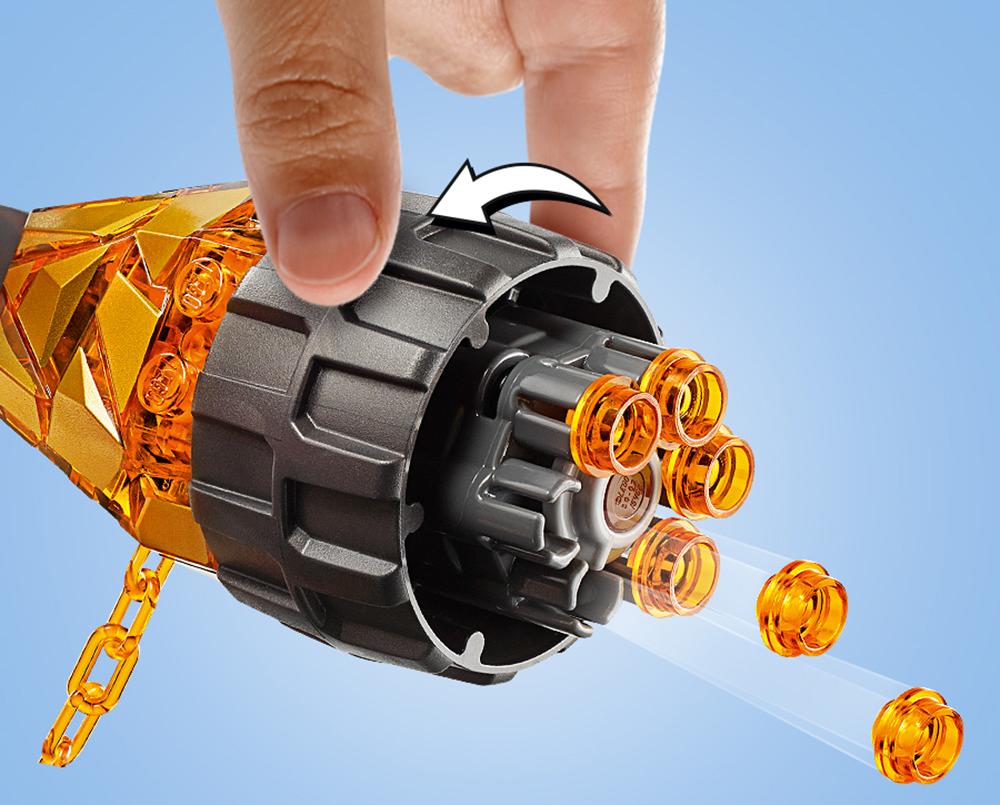 Molten Man’s other hand is actually a lava-shooting cannon! This arm cannon has a grey rapid stud shooter in the middle with a gunmetal grey wheel piece around it. If you turn the wheel, it fires off translucent orange studs.

Molten Man is a pretty cool build overall, though I must say that it does look like a LEGO Nexo Knights monster. 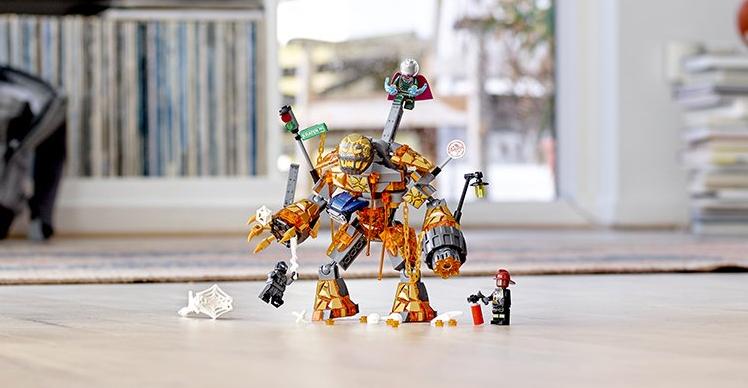 Furthermore, while Molten Man is cool, I personally feel he has little use outside of the Spider-Man Far From Home line (unlike some other Marvel sets which can be used for multiple movies). I also am not a huge fan of how the head print looks pretty cartoonish. 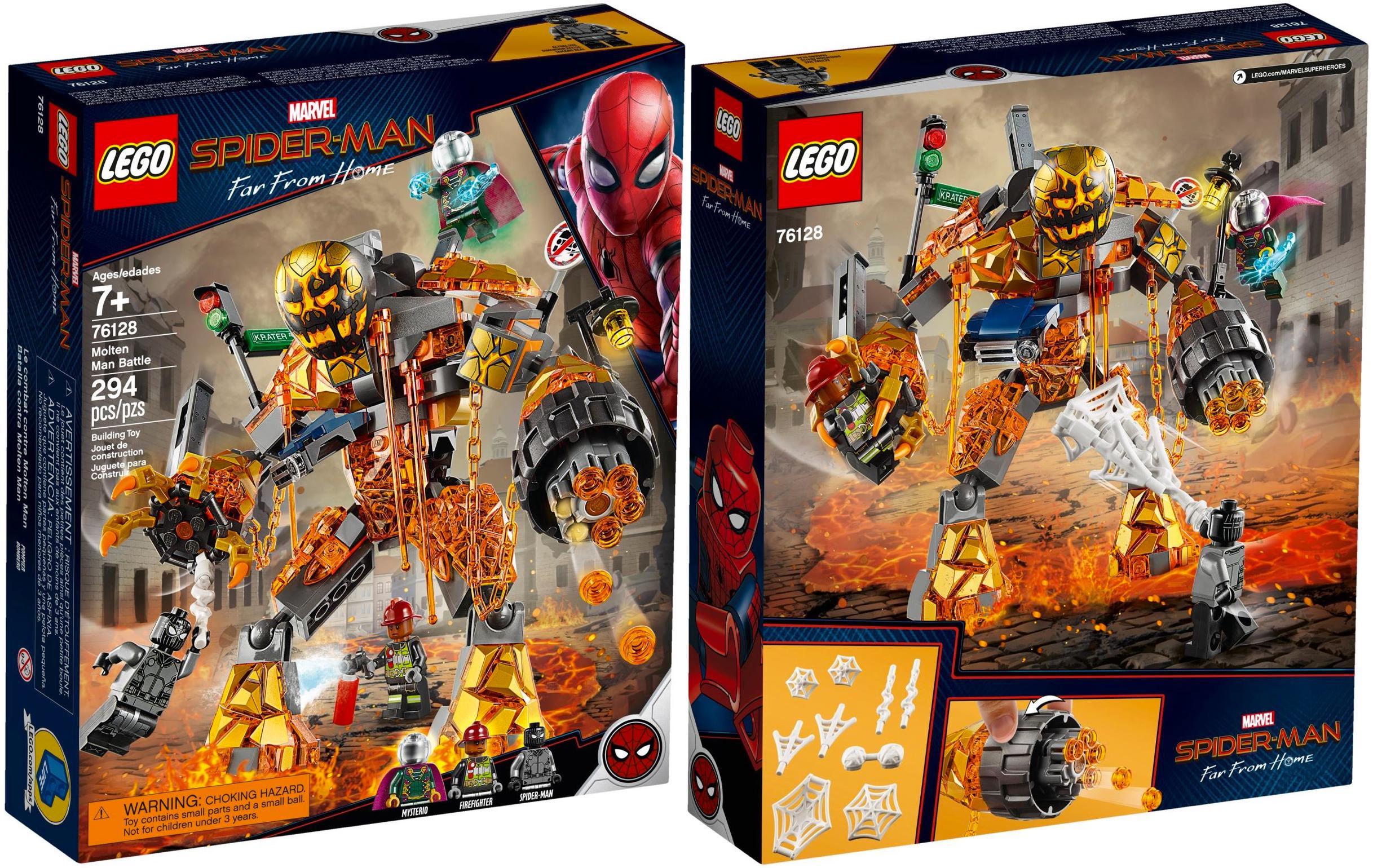 On the whole, I think this set is good. Not exceptional and not terrible, but a good set. The minifigure selection is good enough – Stealth Spider-Man and Mysterio carry the wave while the firefighter’s a bit lame. The Molten Man build is okay but I feel he’s a bit too cartoonish. Playability is good as Molten Man is poseable and is fun to play with. Finally, I think the price is fair. It’s good in the UK and okay in the rest of the world. $25 USD / $50 NZD would be a great price, but it’s not too much to wait for a discount first.