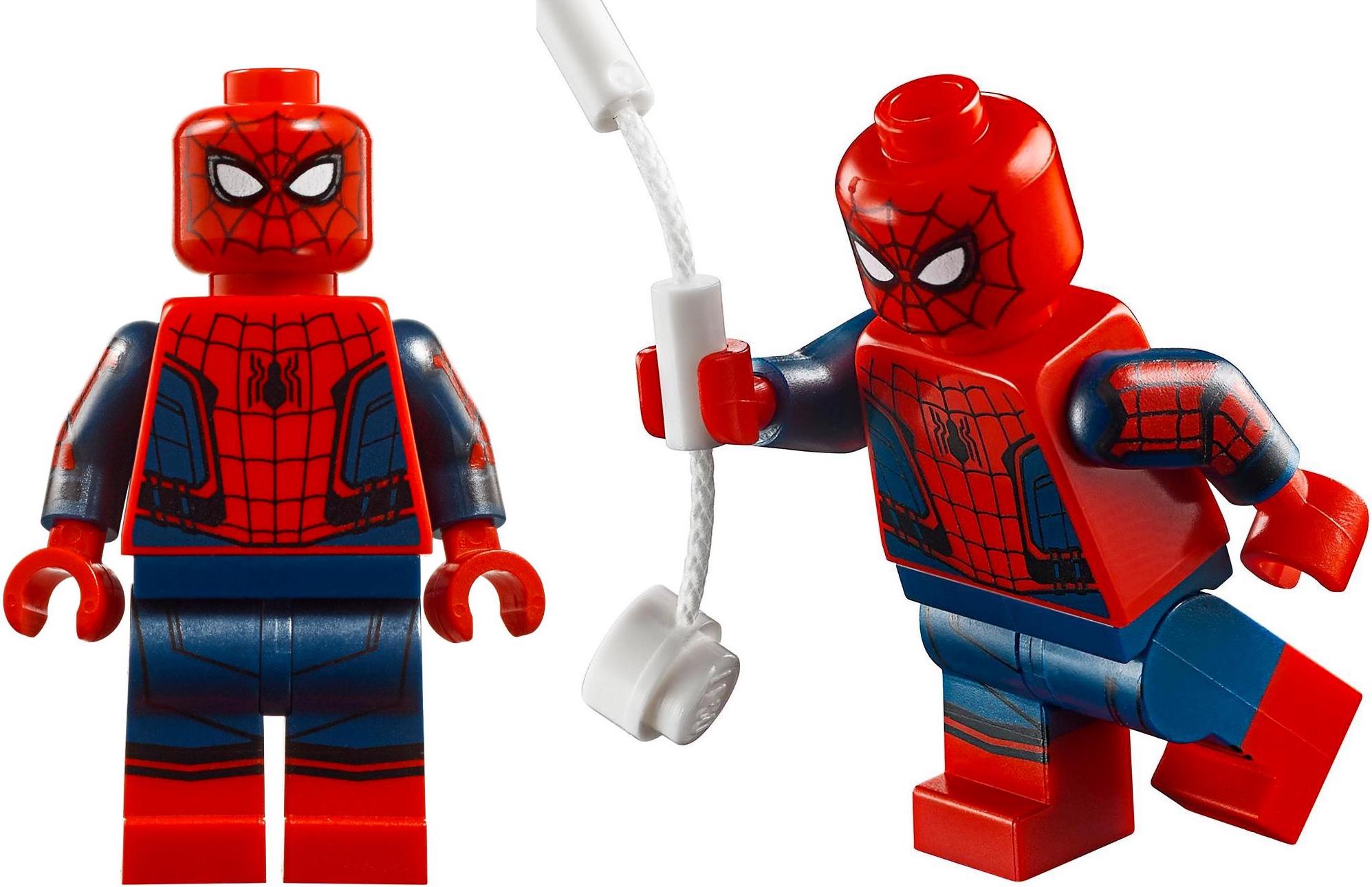 The first minifigure in the set is Spider-Man himself. This is the only LEGO Spider-Man Far From Home set that comes with a regular Spider-Man minifigure; however, this minifigure is not new. It has previously appeared in the LEGO Spider-Man Homecoming sets. Interestingly, this is Peter’s old red and blue suit, which might be inaccurate as he seems to be using his new red and black Spider-Man suit in the movie. We don’t get an official LEGO minifigure of the red and black Spider-Man suit in any of the sets so this is kind of a missed opportunity. Still, this is a great minifigure, with detailed prints on the head, torso, arms, and legs, along with dual-molded legs that look fantastic. Spider-Man’s only accessory is a long white LEGO string, meant to represent his web.

The next minifigure in the set is Mysterio. This minifigure is new but not exclusive, appearing in all three LEGO Spider-Man Far From Home sets (including 76128 and 76129). Still, it’s a great minifigure. Mysterio has a new clear helmet piece with a fishbowl shape, along with an unprinted silver minifigure head underneath. He has a dark pink cape and a dark green design with gold highlights. This looks great but is slightly inaccurate as Mysterio in the movie has a golden chestplate. Mysterio is armed with two translucent blue Power Blast pieces: you can fire them off by pressing on their tails. However, Mysterio’s powers in the movie appear to be mostly green. Despite its inaccuracies, this Mysterio minifigure is still really nice. 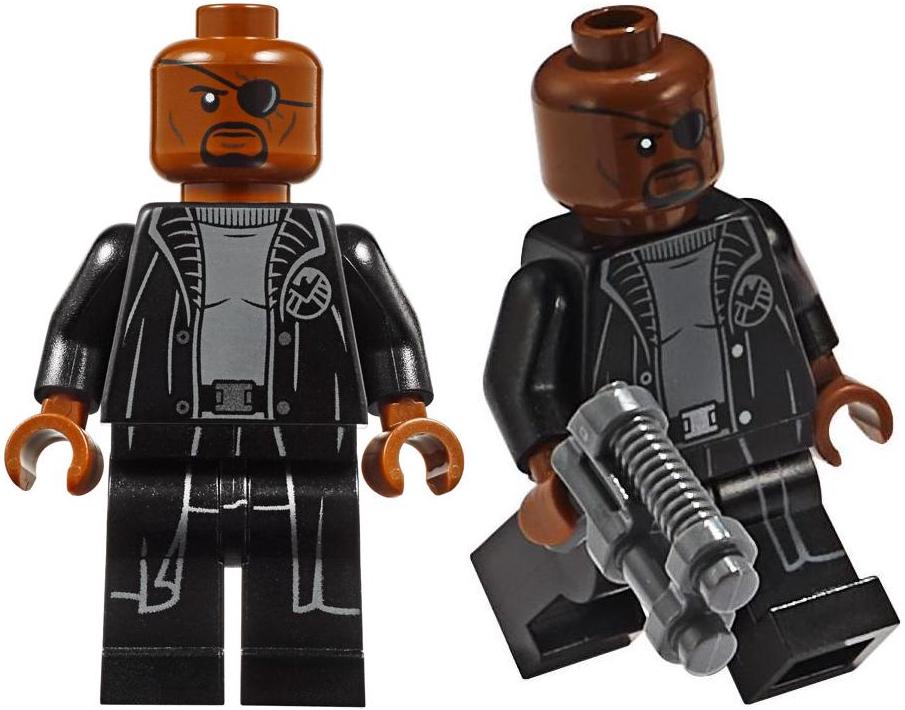 Our third minifigure in the set is Nick Fury and wow, this minifigure is fantastic! It is exclusive to the set and is definitely the best official LEGO Nick Fury minifigure so far. The head print is fabulous, with a stern expression and his signature eyepatch, along with printed scratches under the eyepatch. He has a new torso print which shows a black trenchcoat over a dark grey shirt, along with a S.H.I.E.L.D. badge. His legs are reused from Snape in the LEGO Harry Potter line, but it looks great and works well here. This is the first official LEGO Nick Fury minifigure we’ve gotten that has a primarily black color scheme (the 2015 one had grey legs) and it looks simply fabulous, matching Nick Fury’s clothing choices in the movie. Nick Fury is armed with one of the standard dark grey LEGO double-barreled guns. 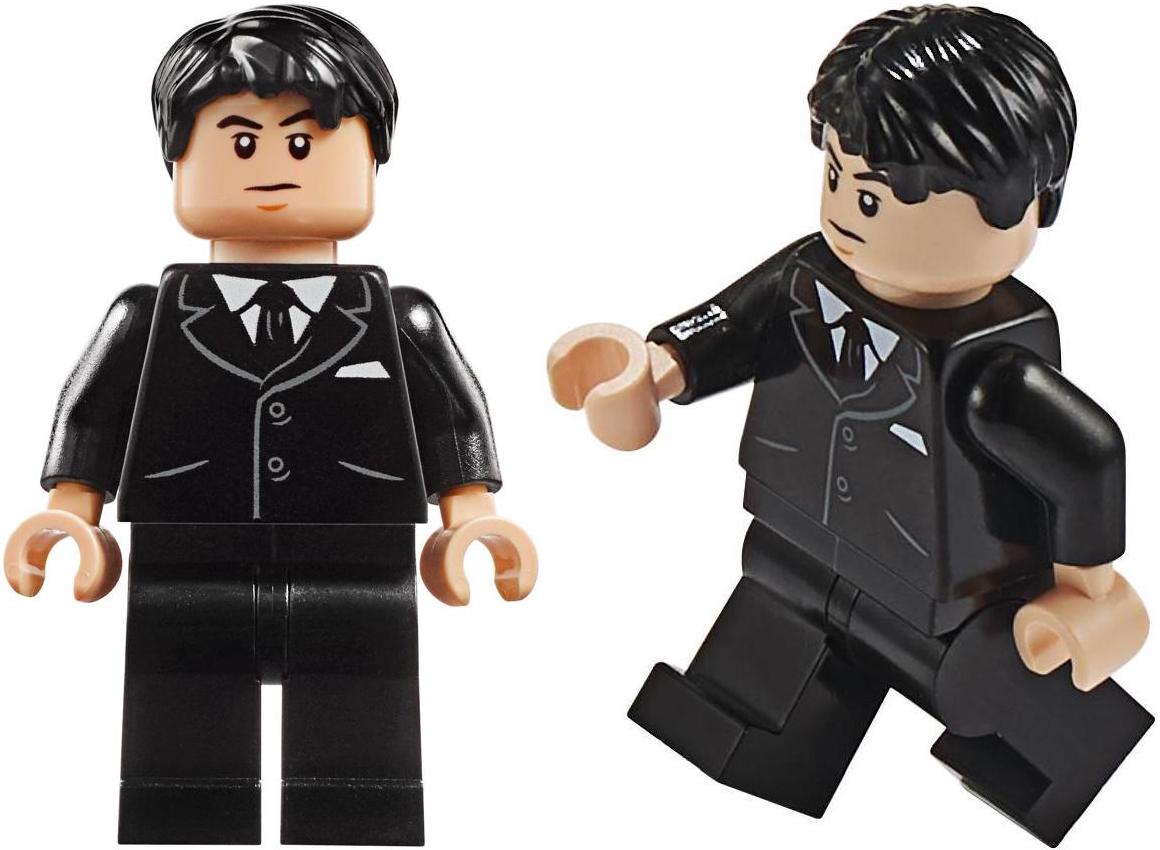 Our final minifigure is designated as “Happy Hogan” by LEGO but… yeah I really don’t think it works. It works fine as a generic Stark employee but man, it does not look like Happy Hogan at all. The face is reused from Kaz in the LEGO Star Wars Resistance sets and it looks comically inaccurate. The black hairpiece doesn’t match Happy either. The black suit and unprinted legs look fine though, and if you have suitable pieces you could probably swap out the head and hair here for more accurate parts. Alternatively, you could just view this as a generic Stark employee. Alright minifigure, horrible Happy Hogan. Happy Hogan is armed with a black gun – one of the more accurate LEGO gun designs.

On the whole, I think the minifigure selection in the set is alright. The Spider-Man minifigure is great but is unfortunately not new, Mysterio is a good minifigure but there are two cheaper sets that come with him, Happy Hogan is completely inaccurate, while Nick Fury is probably the only minifigure that’s basically perfect. I think Spider-Man should have had his red and black suit, and maybe at least one more minifigure should have been included to justify the set’s price point. Four minifigures in a set of this size is a little low. 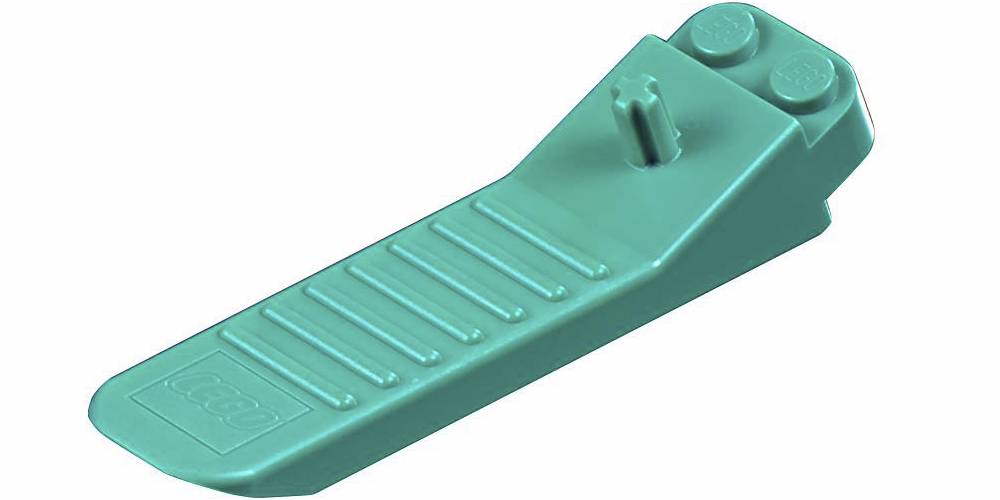 It’s not really a minifigure, but it’s worth noting that this set comes with one of the new teal-colored LEGO Brick Separators. These are new for 2019 and appear in 9 other sets (including 76126 Avengers Ultimate Quinjet and 76131 Avengers Compound Battle – the two largest LEGO Avengers Endgame sets). 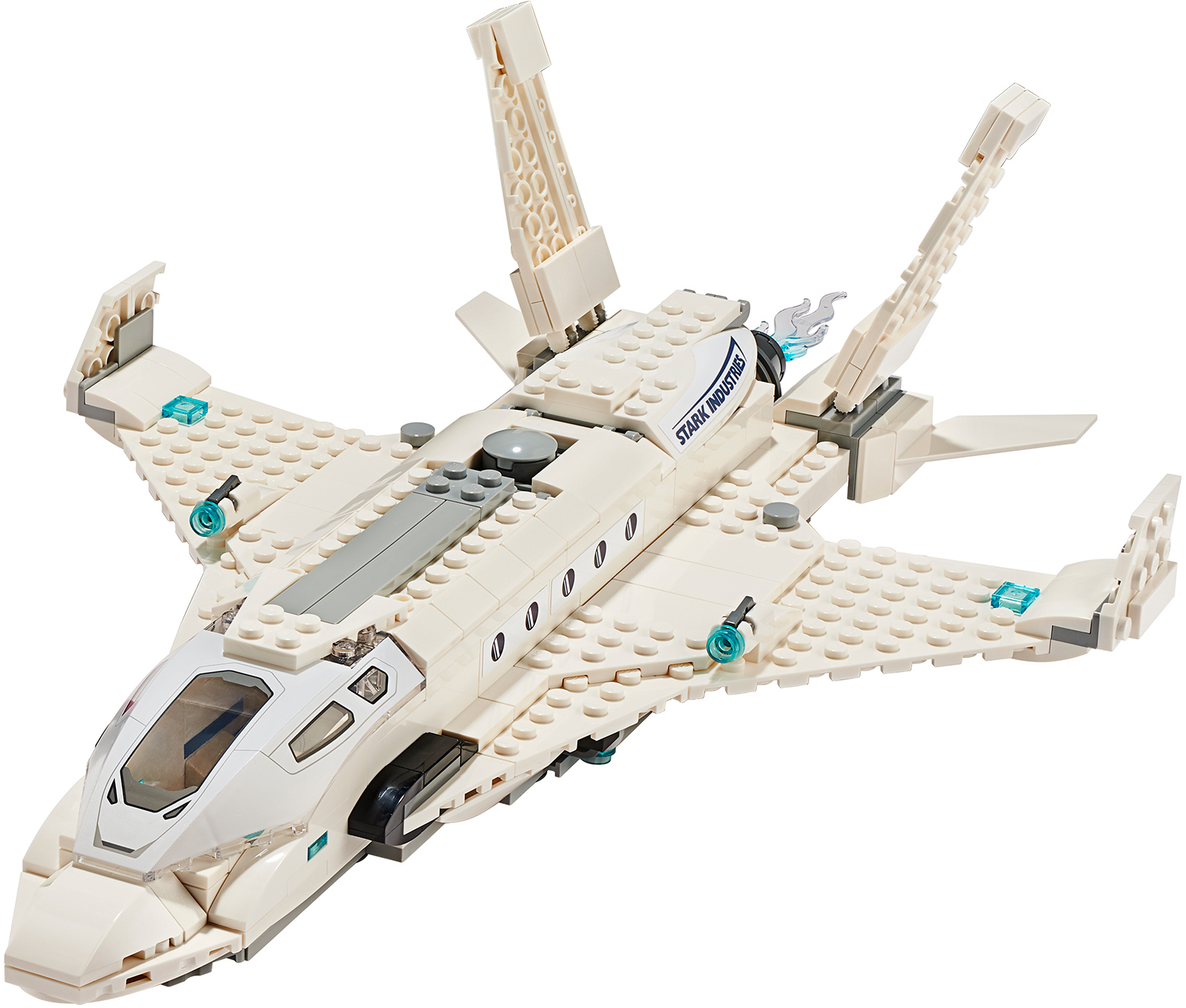 The main build in the set is the eponymous Stark Jet. It has a predominantly white color scheme and is supposed to be a regular airplane that has likely some upgrades from Stark Tech. It’s very very white, but it has a small light grey stripe in the middle at the top of the jet which looks a bit odd to me. The cockpit is printed and there are some stickers used throughout, but frustratingly the white color on the stickers is different from the white color of the bricks, which makes it look quite odd. This is especially apparent in the image above, and it makes the white bricks look slightly yellowish. 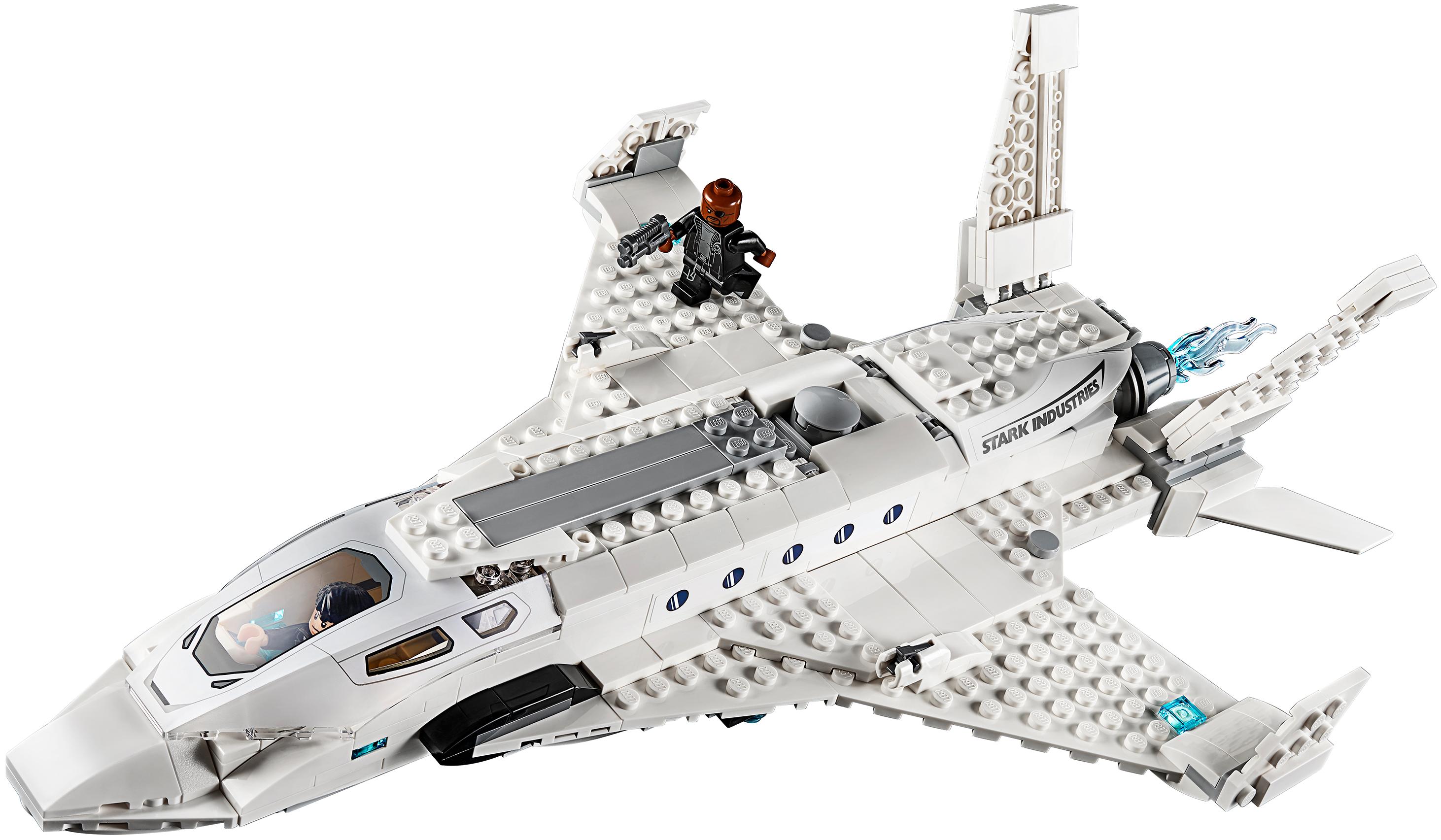 Anyway, the jet has a fairly angular design which looks good. There are two main wings along with four tail wings. The tips of the wings are angled upwards but cannot be hinged; they are static. The two bigger flaps at the back, though, can be adjusted on hinges. The rear engine is dark grey – a suitable mechanical color – and there’s a large translucent light blue flame piece attached to represent the exhaust. It looks great.

The shaping of the overall jet, interestingly enough, seems surprisingly accurate to how the jet appears in the trailer. It seems LEGO had enough material to work with when creating this set. 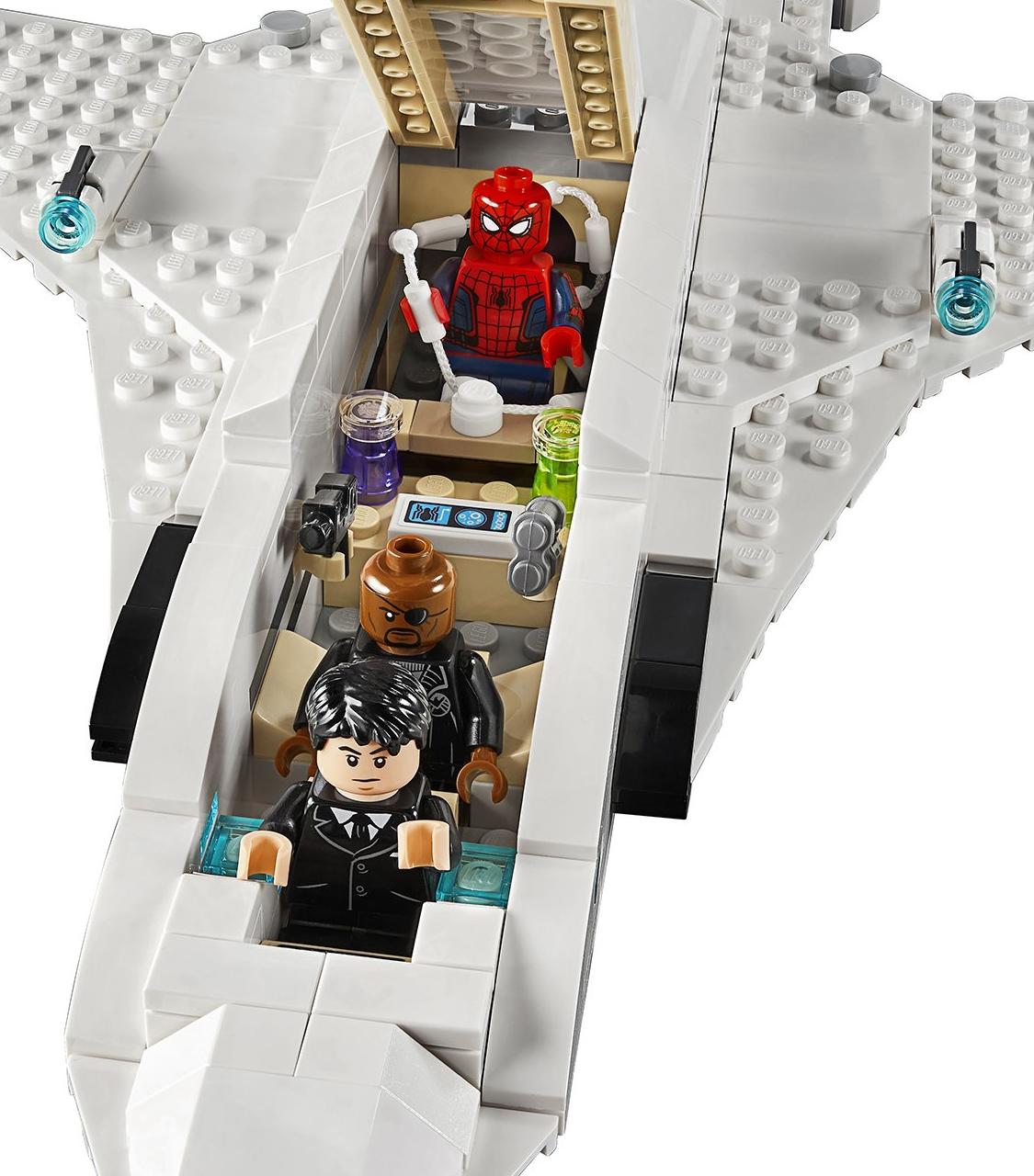 The cockpit area is pretty long, and the top flips open as one long build connected by ratcheted joints. Inside, there’s a long four-stud-wide space to place minifigures. There’s a pilot seat at the front for Happy Hogan, with three stickered consoles and two translucent blue pieces. Behind that, there’s another seat for Nick Fury, with tan armrests. The space behind that has two clips for the two included guns, but you could probably fit a minifigure here if you wanted. Finally, there’s a rear area where you can seat Spider-Man, though this area serves as a play feature. The table in front of Spider-Man has two vials and a stickered 1×2 tile with some Spidey information. All in all, you have space for three, maybe four minifigures (depending on how you place them). 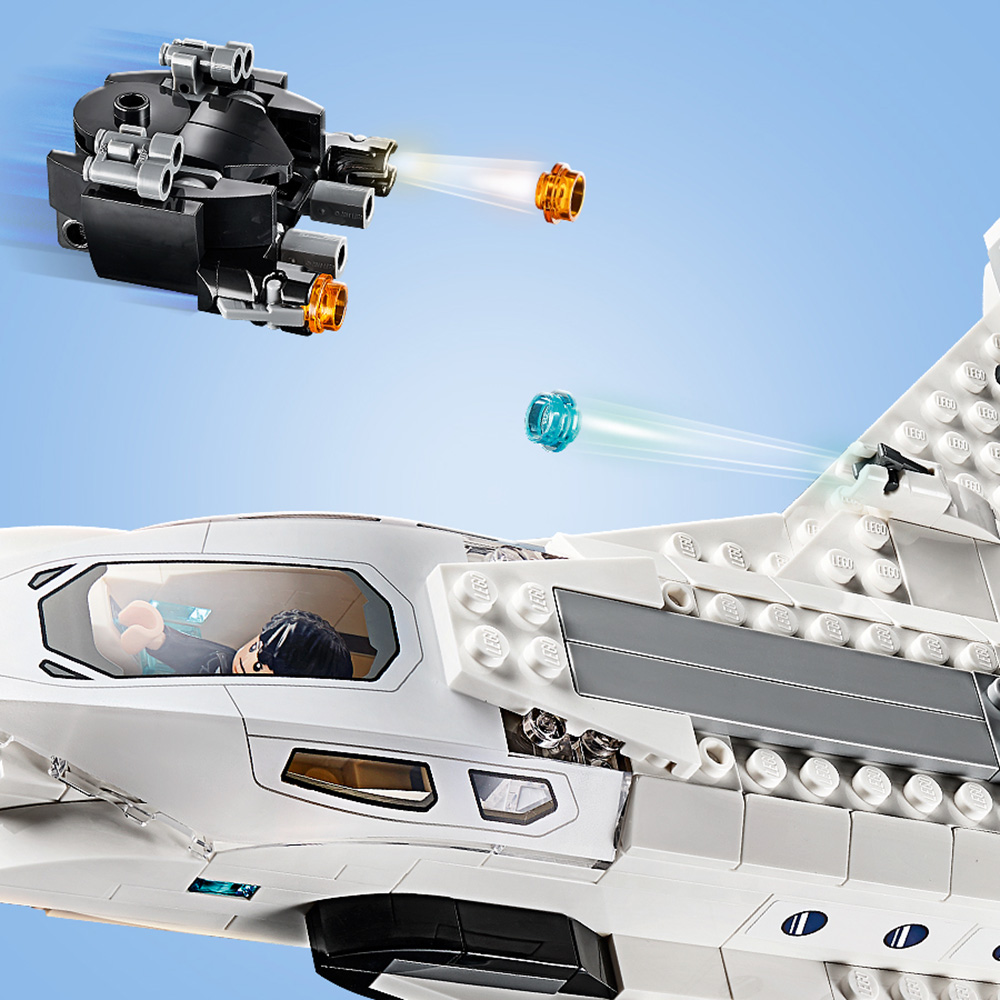 The wings of the Stark Jet have a pair of stud shooters – one on each wing. These fire out translucent light blue studs as defence systems. 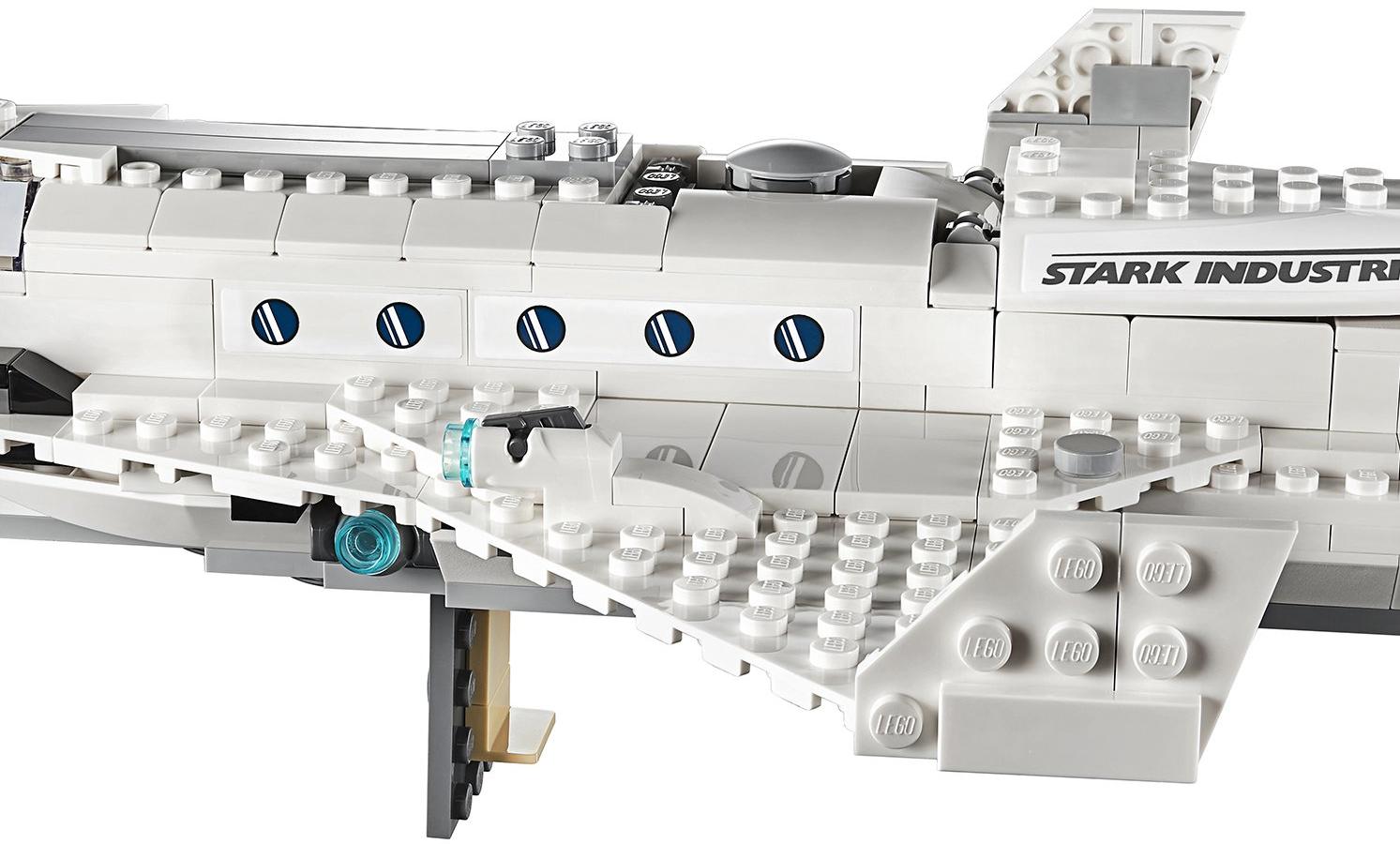 Behind the cockpit, there’s a button made from an inverted 2×2 round brick. Pressing it will open a trapdoor at the bottom of the jet.

(Also, this angle shows a pair of landing lights below each wing. These are mounted on ball joints and can be posed as you like. They have translucent light blue studs.) 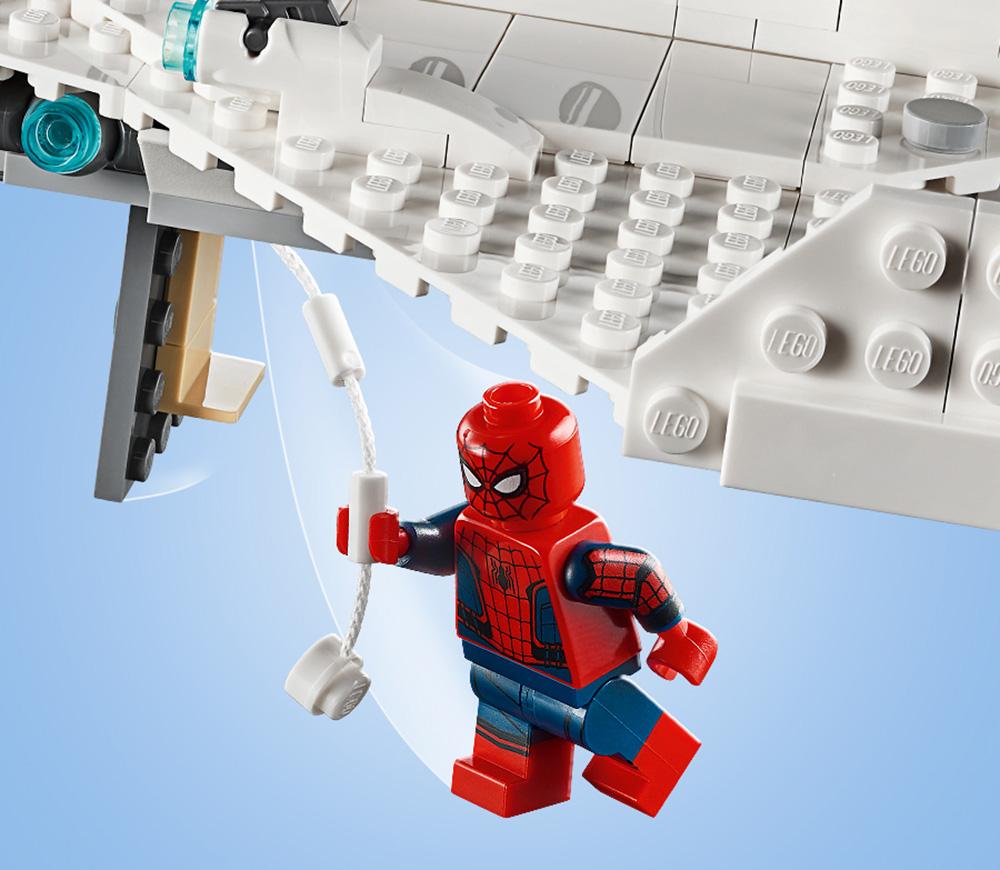 In fact, the trapdoor is actually where Spider-Man is sitting! Thus, when you open the trapdoor with him inside, he drops out. That’s why the web string piece is included – he’s attached via the web to the inside of the jet, and so he drops out like he’s swinging out of the Stark Jet! This feature is similar to the one in 76051 Super Hero Airport Battle, but a bit more sophisticated. 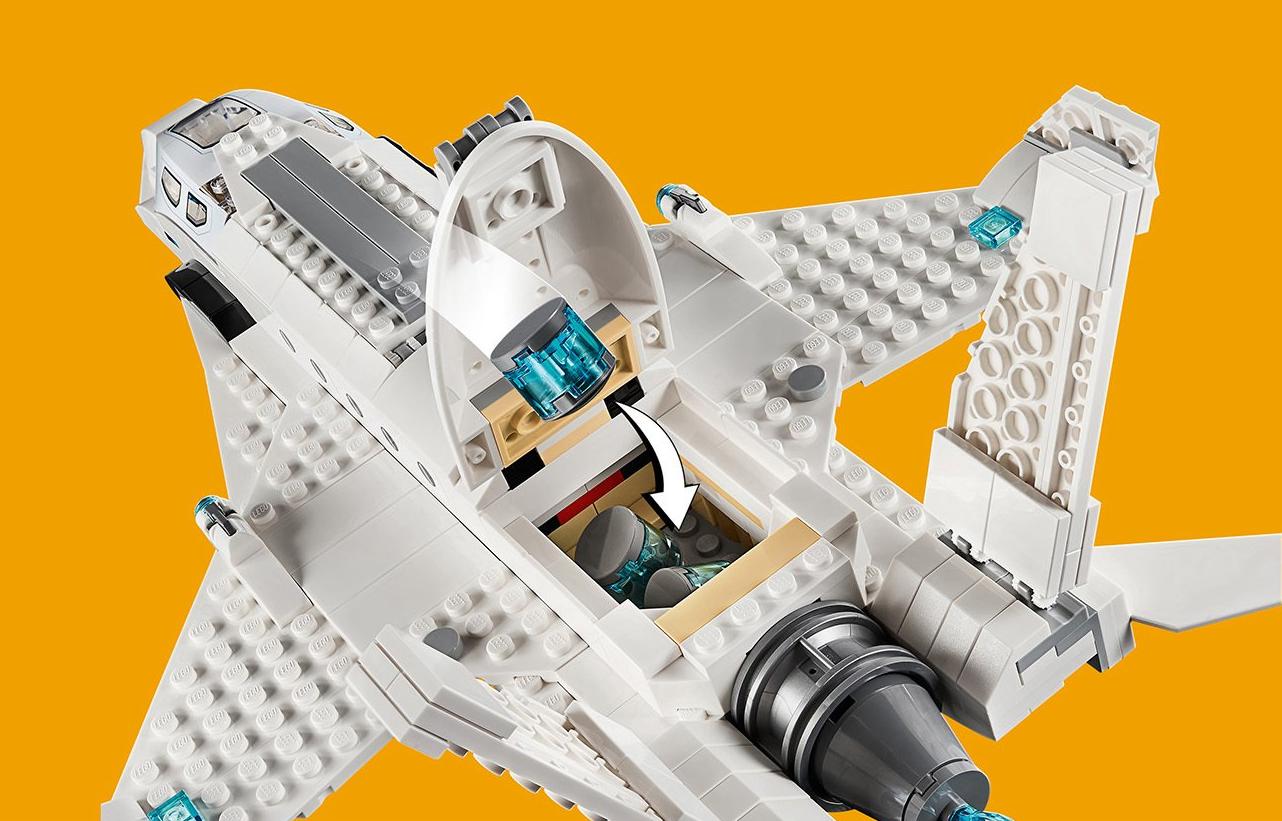 The back of the Stark Jet has one final storage compartment. This area can be hinged open and inside you’ll find three bombs.

These bombs are pretty simple builds, made from just three pieces. However, the translucent light blue core round brick makes it look quite cool. 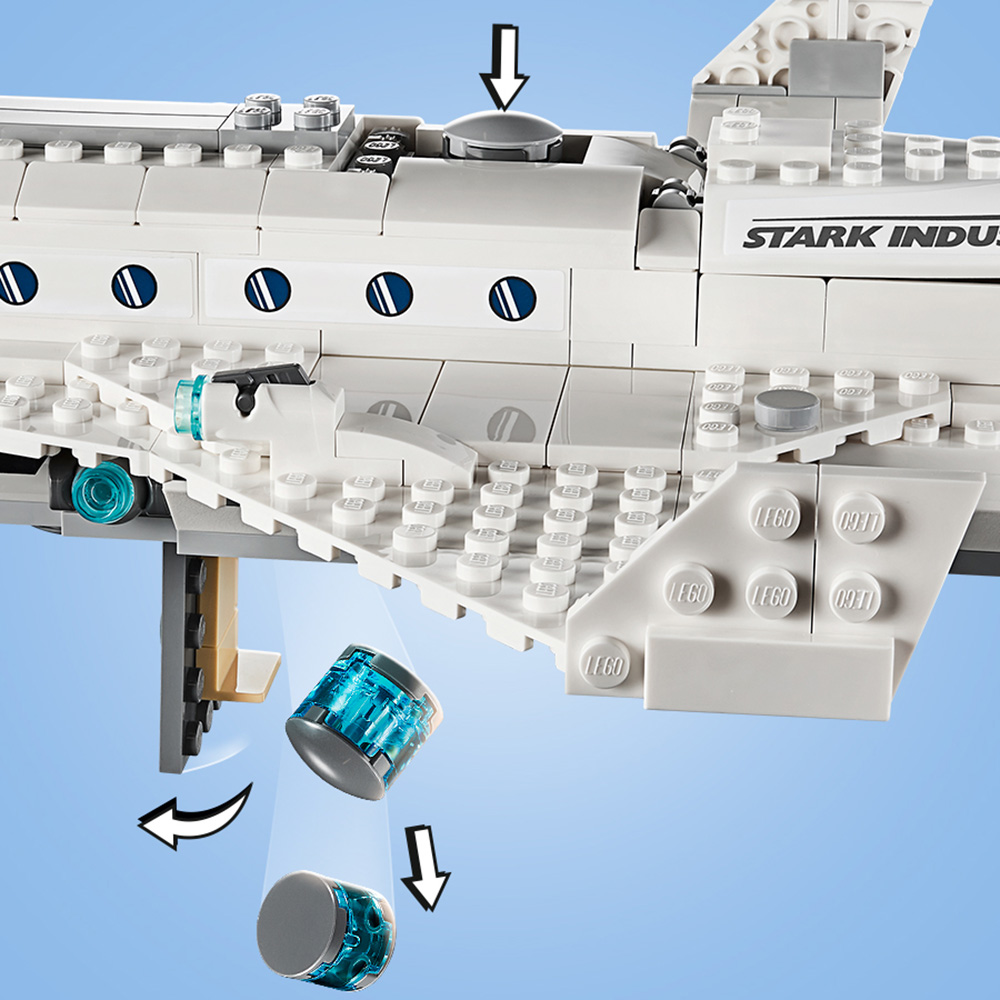 This allows you to load the bombs into the trapdoor compartment. Now, when you press the button, the bombs will be dropped onto whatever target lies below!

That’s it for the Stark Jet. It’s a decent build but it’s not mindblowingly good, and I really wish the windows were brick-built as the different colored stickers are an eyesore. 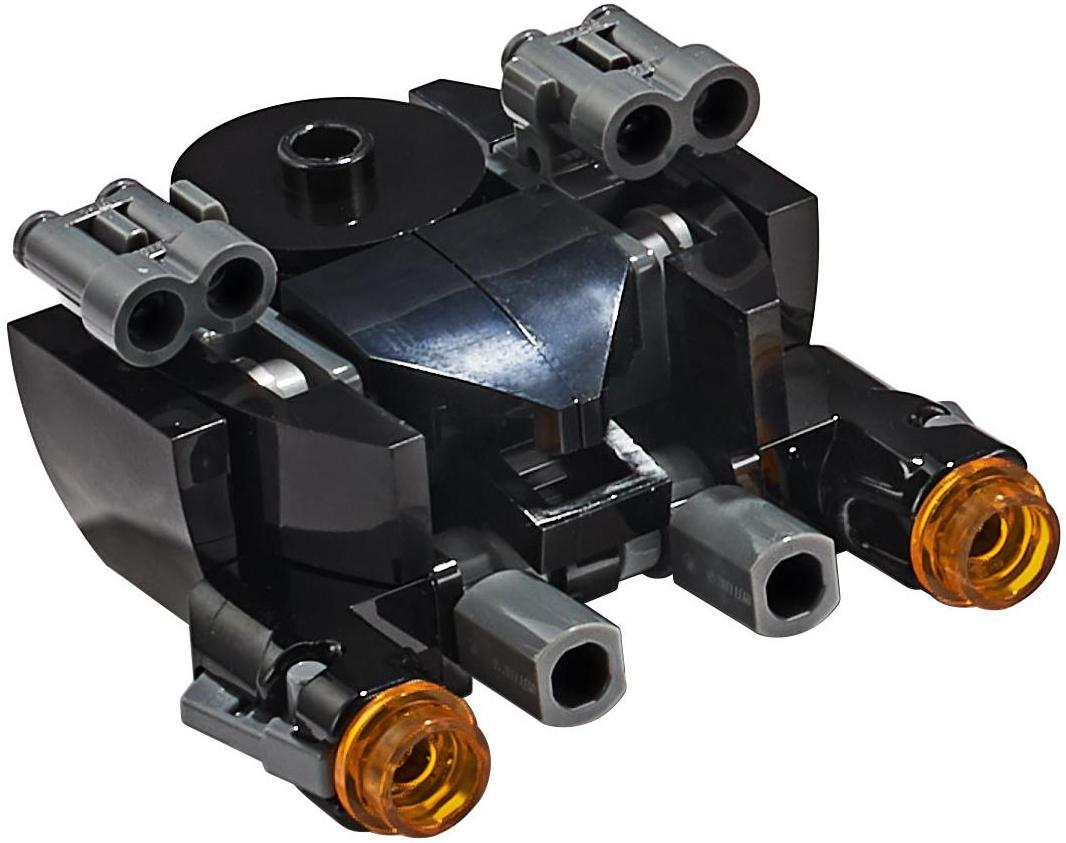 Now, there are two weaponized drones included as sidebuilds. These drones are identical and are fully brick-built. 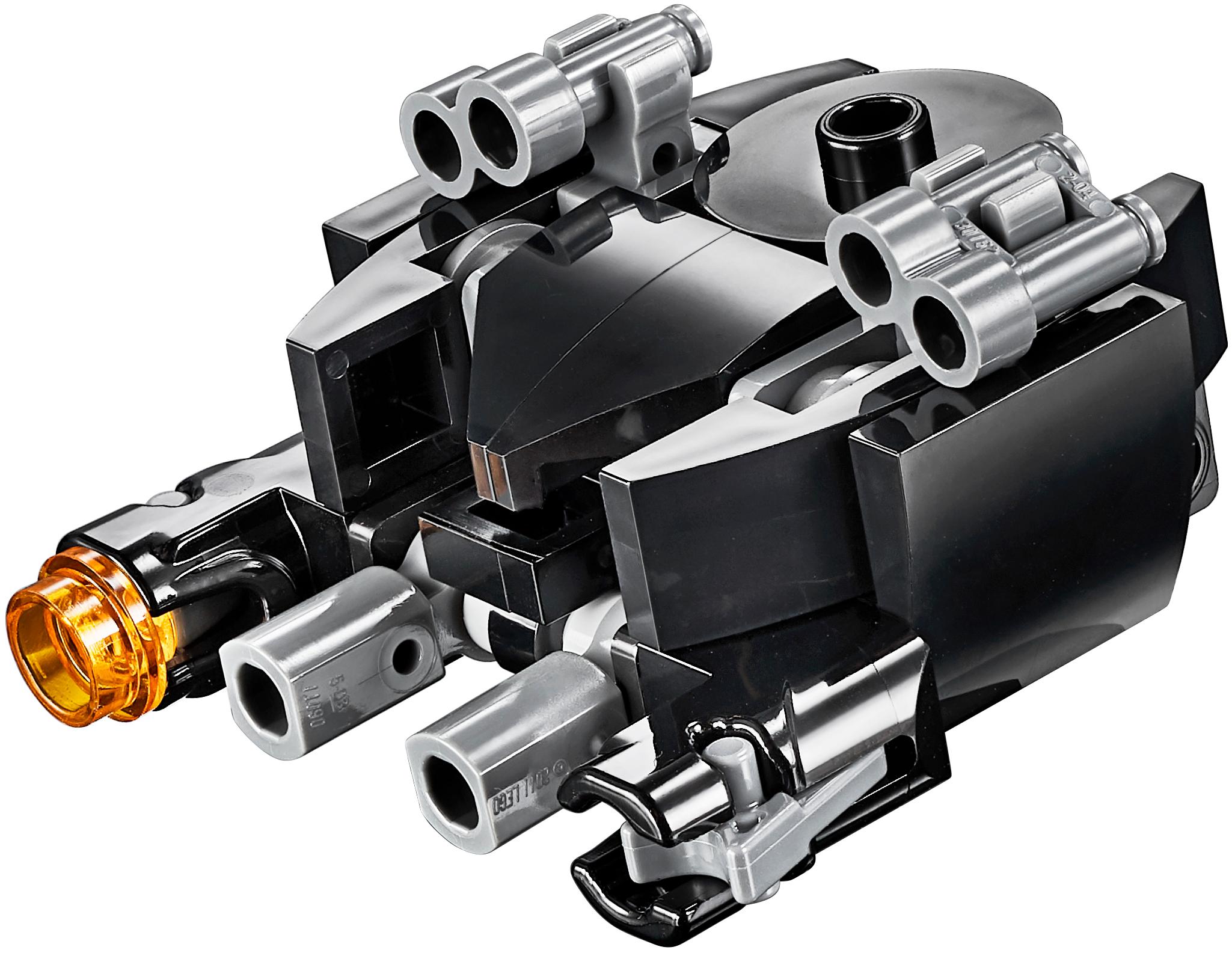 The drones have a black color scheme which looks pretty cool. They use quite a few small pieces in interesting ways to give it a fierce look. There are angled corner curved slopes used for a sharp front, along with some grey binoculars and clip pieces. 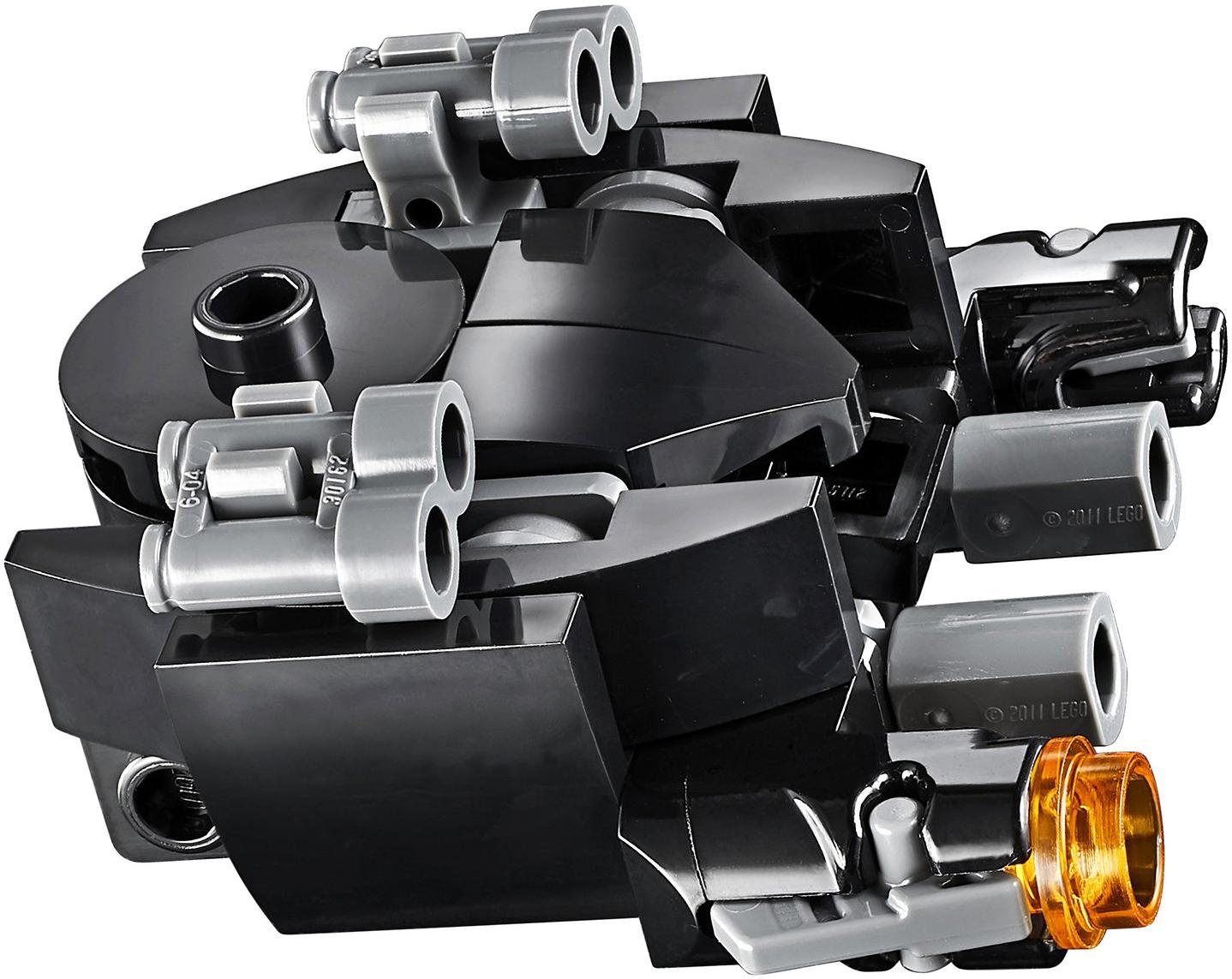 I believe the dark grey parts represent machine gun barrels, but two stud shooters are integrated on each drone. These fire off translucent orange studs. They’re placed in a great way that allows you to fire them off easily when you’re swooshing the drones around, and the best part is that the translucent orange studs just look like drone sensors. 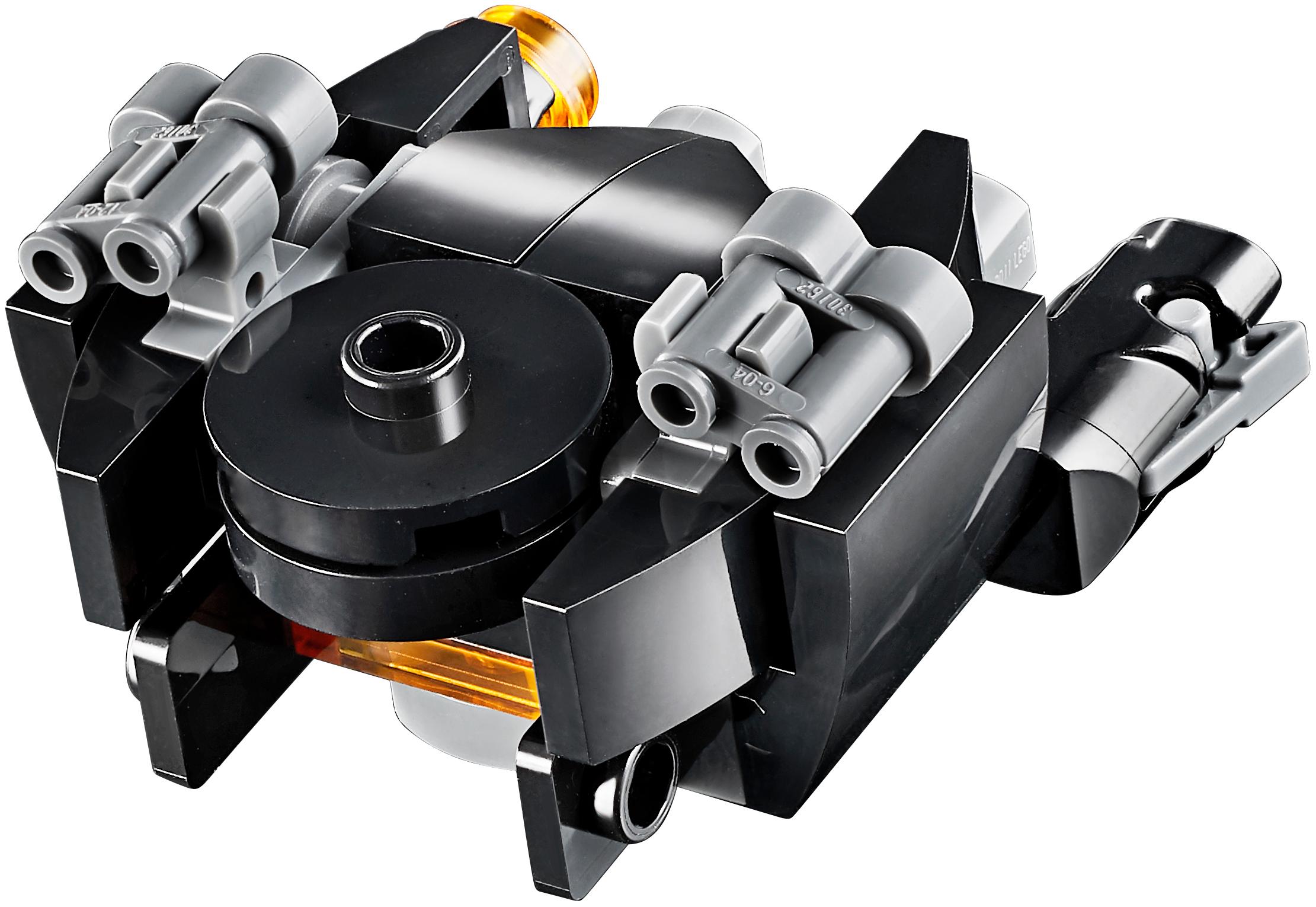 The backs of the drones are a little bit hollow but they still have very interesting shaping. There’s a rounded top and a translucent orange thruster. I wonder if these will actually appear in the movie or if these are created by LEGO specifically for this set.

That’s it for the builds of this set!

That’s it for my review of LEGO 76130 Stark Jet and the Drone Attack! I think it’s a decent set but it’s not terribly amazing. The build is fine but there are definitely better builds out there – despite being more expensive the build of 76126 Avengers Ultimate Quinjet is leagues better and has much higher playability. This Stark Jet just allows you to place minifigures and drop bombs. It’s fun, but not amazingly fun or creative. The minifigure selection is not bad but I definitely think at least one more minifigure should have been included, and the lack of the red and black Spider-Man suit is a huge missed opportunity. Finally, the price – I think this set is actually priced pretty well in Australia and New Zealand and I have no complaints on that front. However, the UK price is slightly overpriced and $70 in the U.S. is definitely way, wayyy too expensive.

Thank you for reading! Let me know your thoughts in the comments section below! 🙂