This set would come with five minifigures: Hawkeye, Nebula, and three Outriders. Hawkeye wears his Ronin outfit, which is predominantly black but features gold highlights. He has his spiky hairpiece along with a black bow and arrow. The Outriders are unchanged from their appearances in sets like 76123 and 76125. 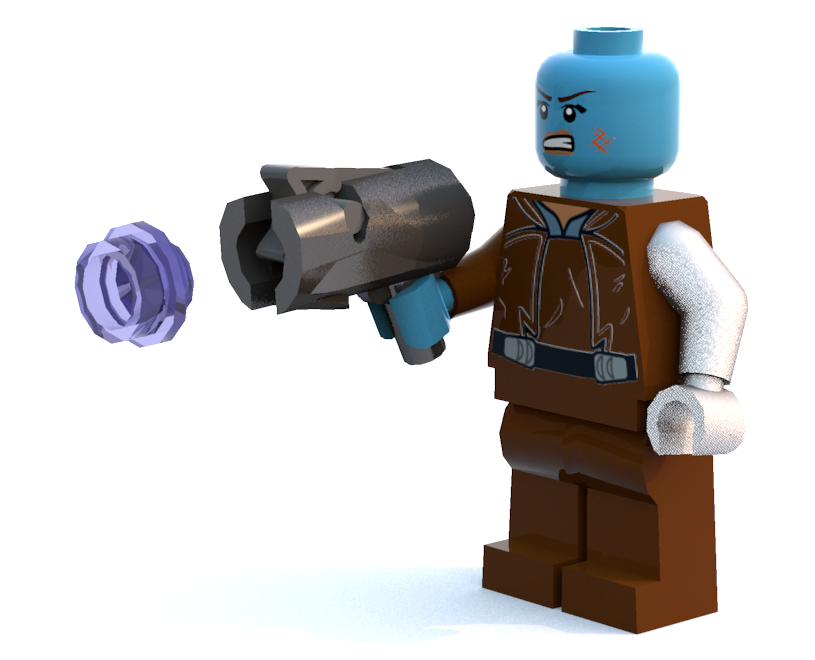 Nebula’s minifigure wears the brown jacket outfit that Nebula sports in the movie. Her face print would ideally have an orange metal print as that was missing from her official minifigure in 76131 Avengers Compound Battle. Her accessory is a gunmetal grey stud shooter which fires off translucent purple studs. 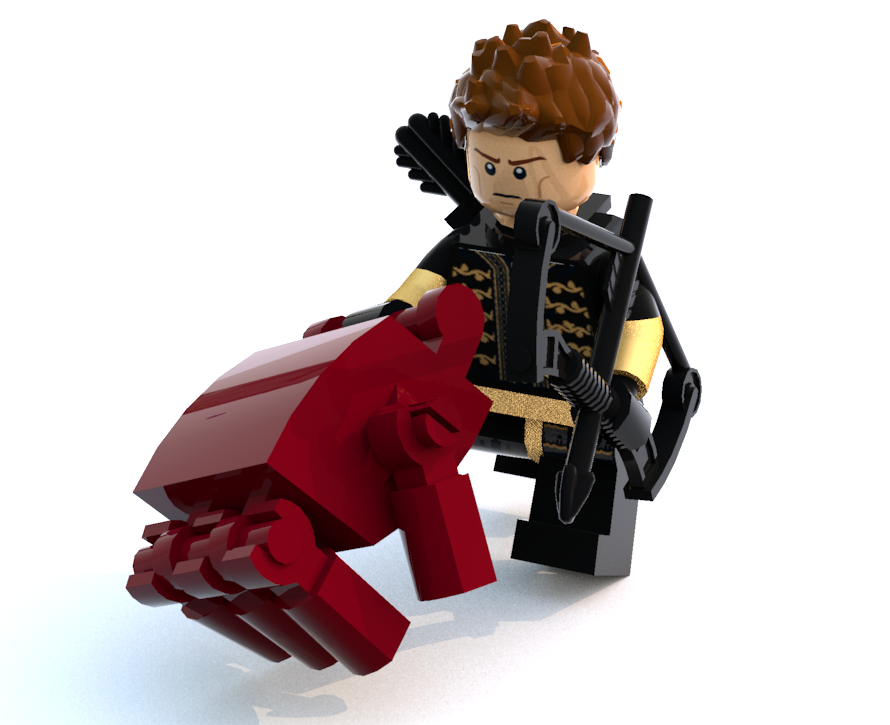 The set also comes with a brick-built Stark Gauntlet (which was wielded by Hulk). Ideally, this build would have a sticker or print of some kind to give it the Infinity Stone designs. 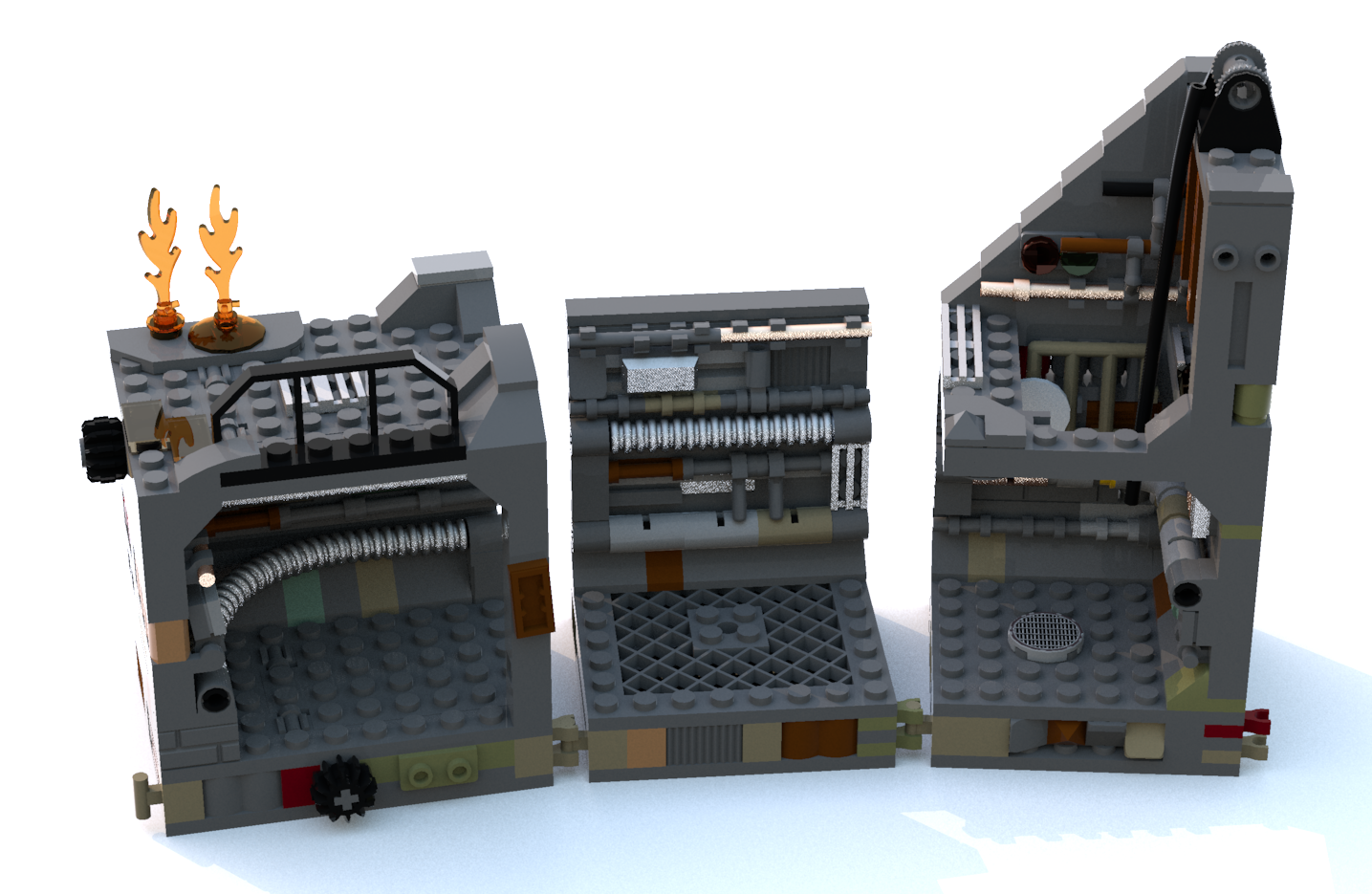 Now on to the build of the set. The build depicts the tunnel section of the destroyed Avengers Compound, where Hawkeye carrying the gauntlet is chased by several Outriders. 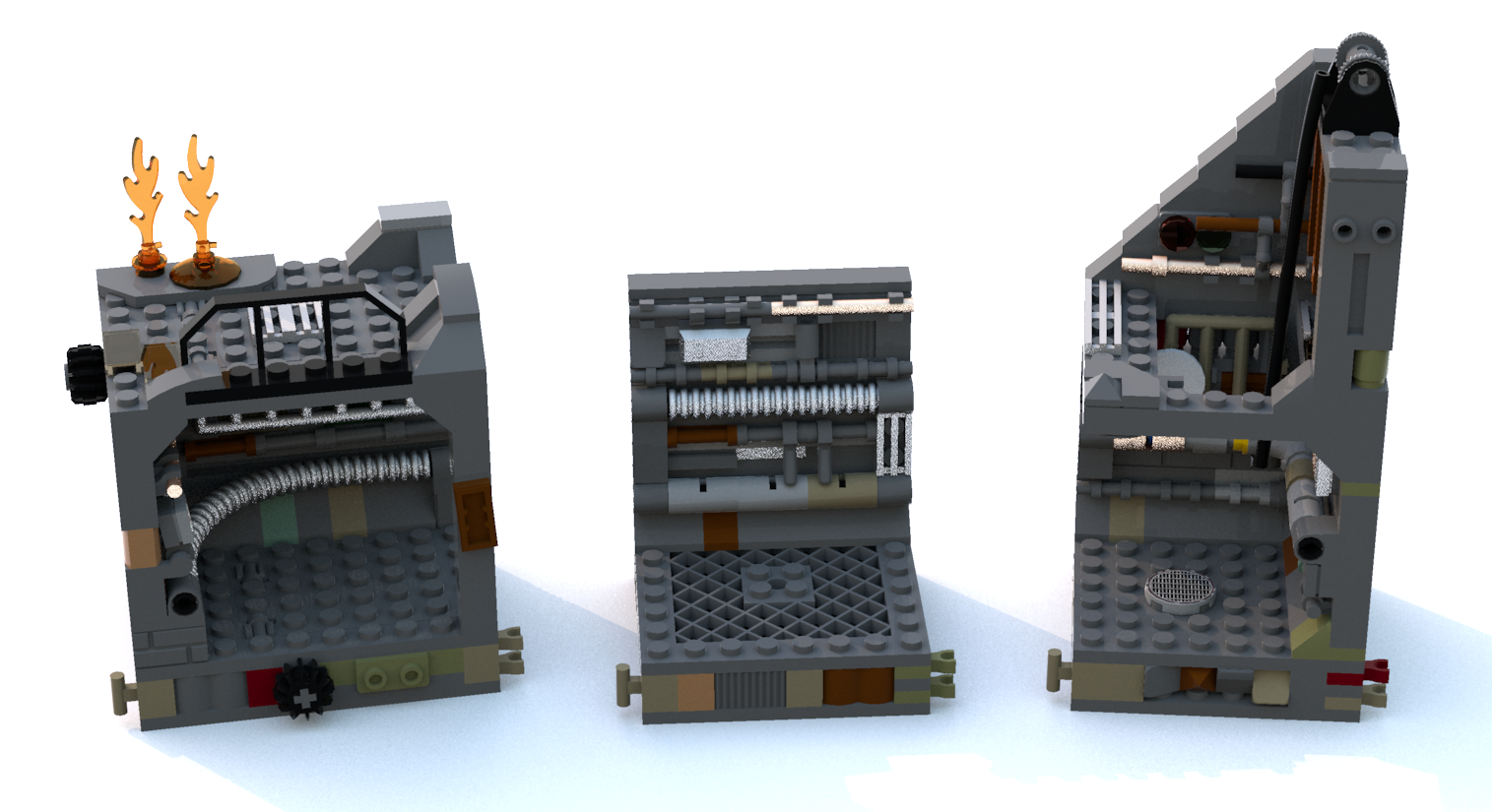 The build separates into three segments. These segments are clipped together at the base and can be hinged as you like. You can also rearrange the order they are in. 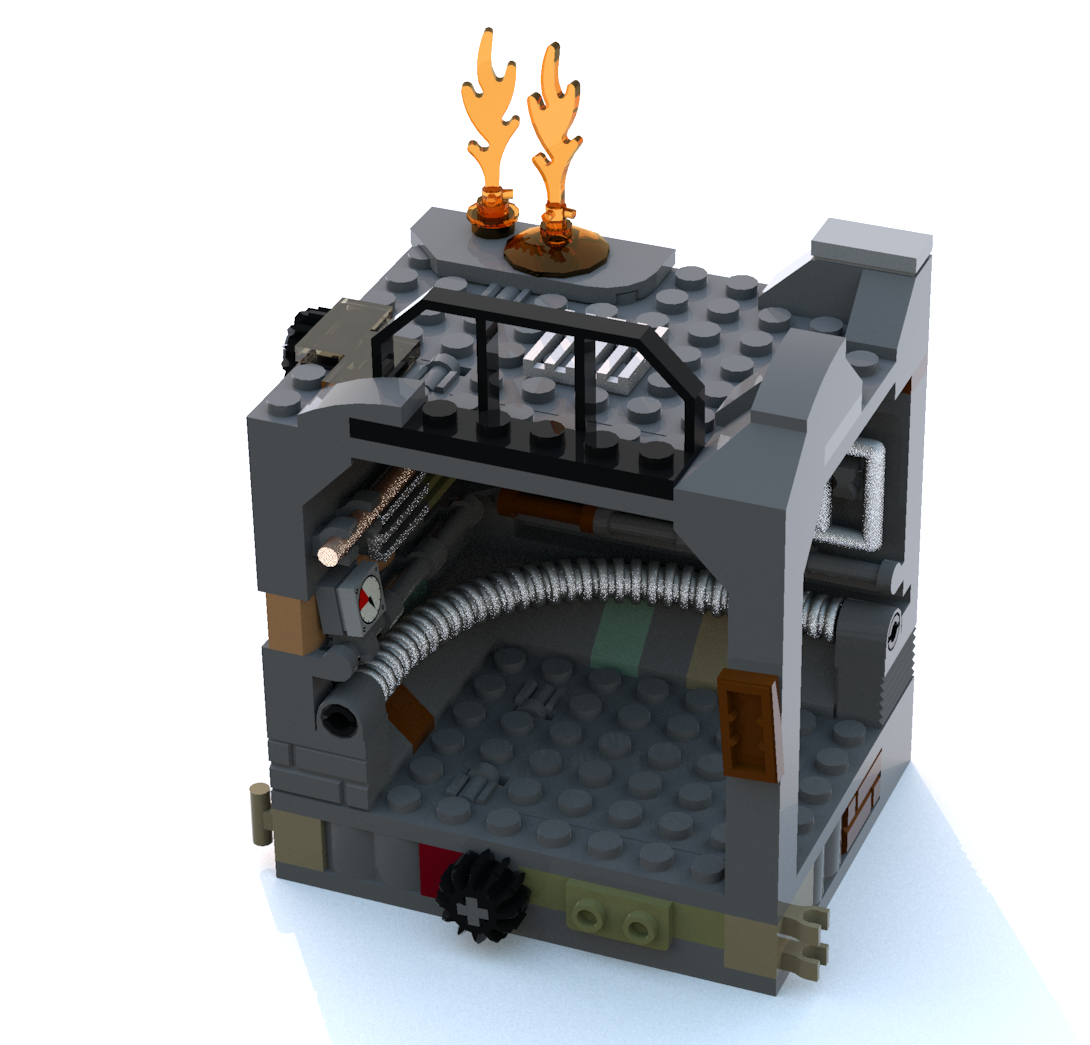 The first segment in the set is the place where Hawkeye starts. It has a tunnel design, with a covered roof. It measures 8 studs wide and 10 studs long. 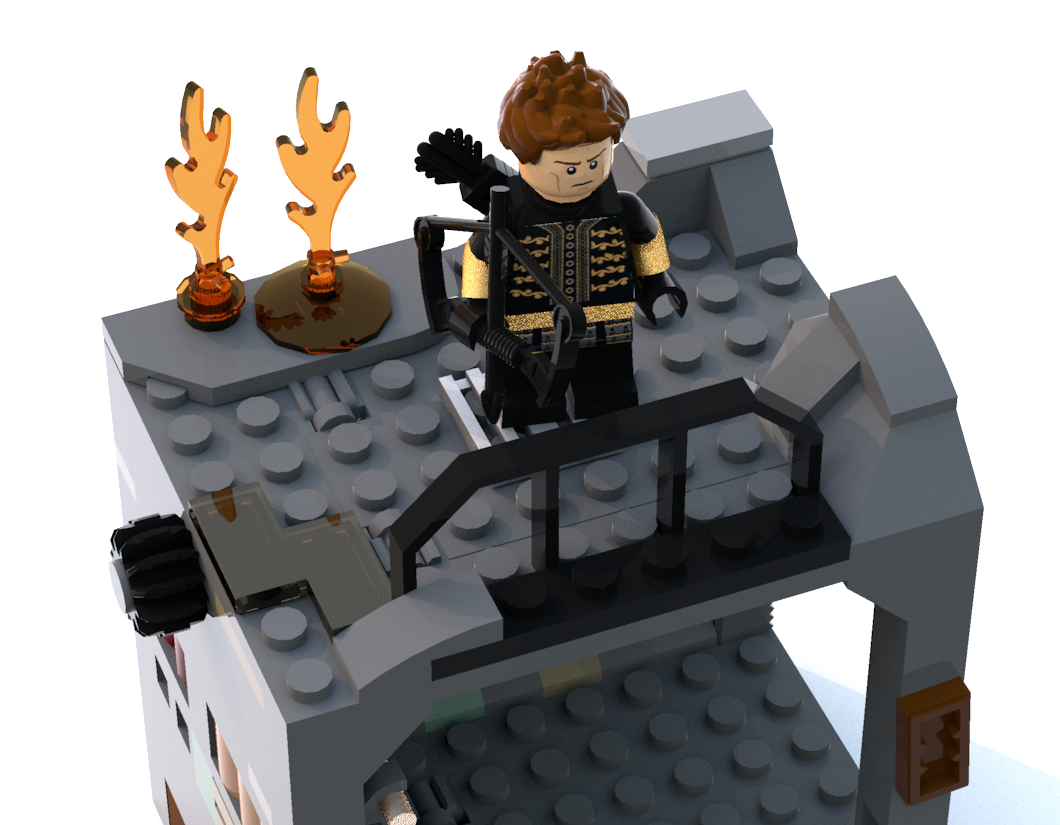 The top part is where Hawkeye stands before the Compound starts to fall apart. There are some flames, a puddle of dirty water, a handlebar, and some dark grey rubble. 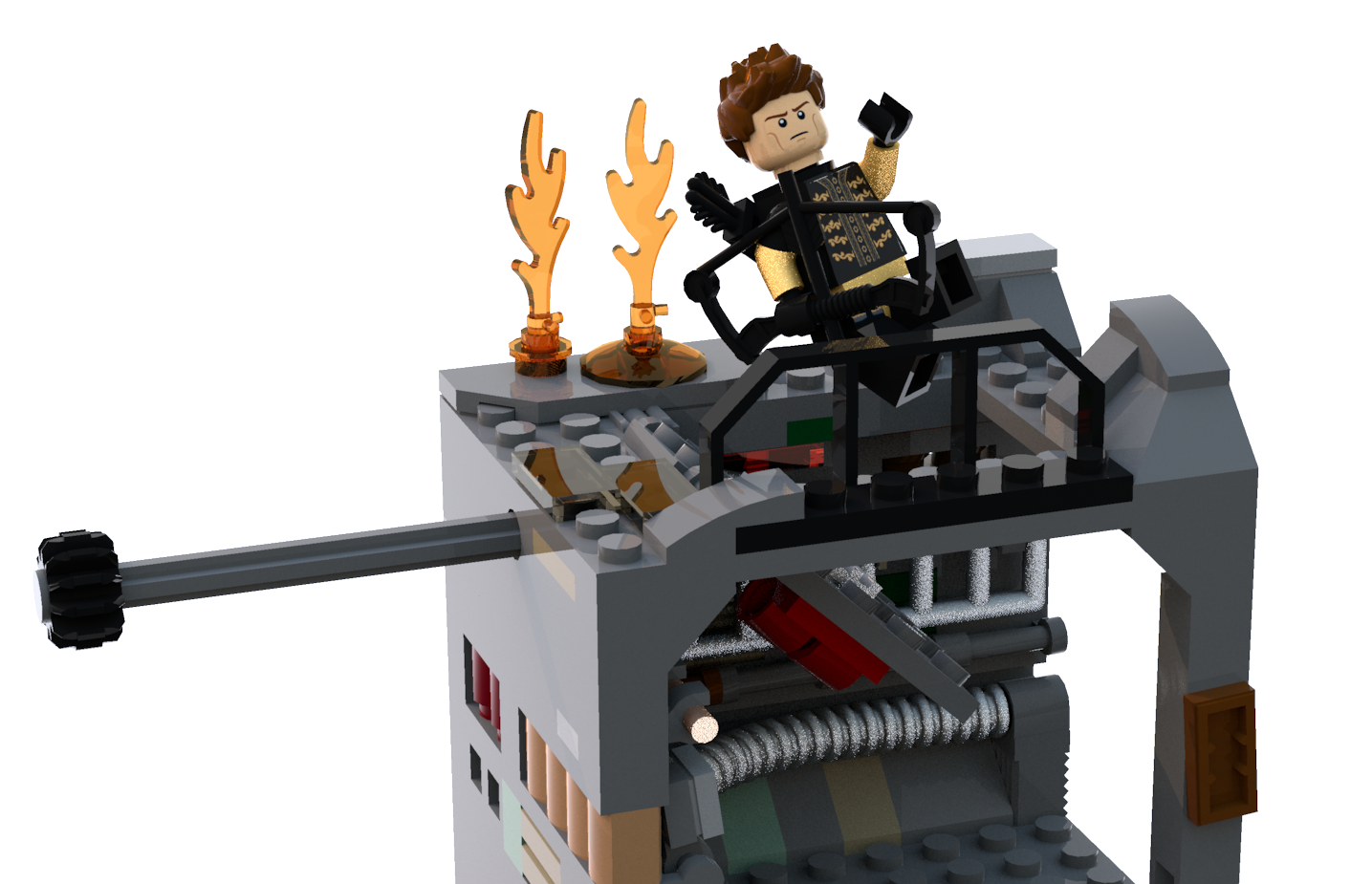 You may have noticed the gear on the side of the build. Pull it, and it will open a trapdoor, sending Hawkeye falling to the level below. This replicates the scene where Hawkeye falls along with the rubble before discovering the gauntlet. 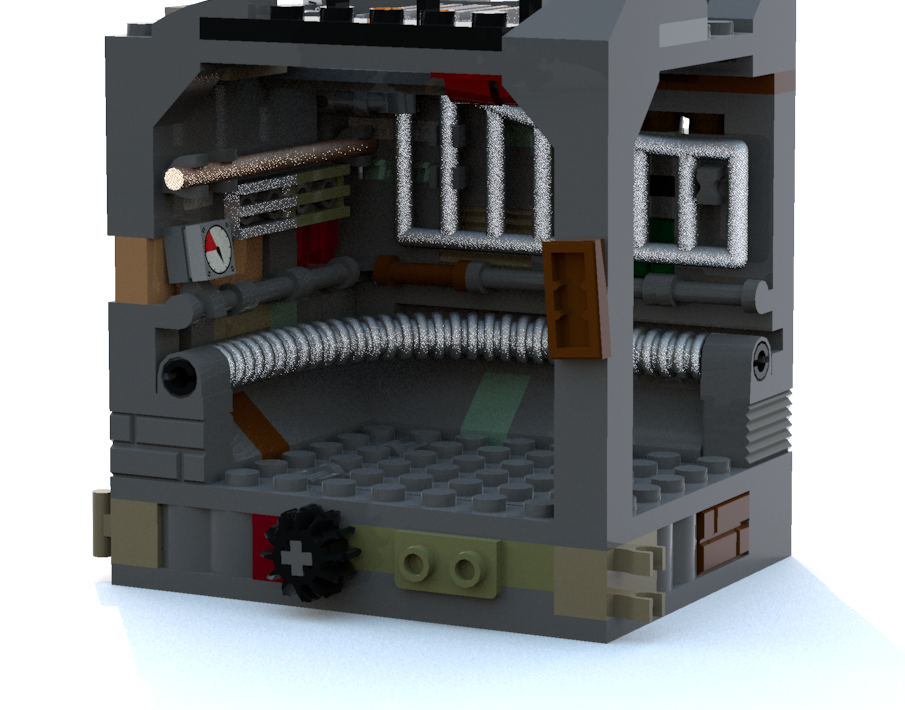 The area below has piping and lots of dirty mechanical detail. There are some studs for a minifigure to stand, however there is a hidden secret here. 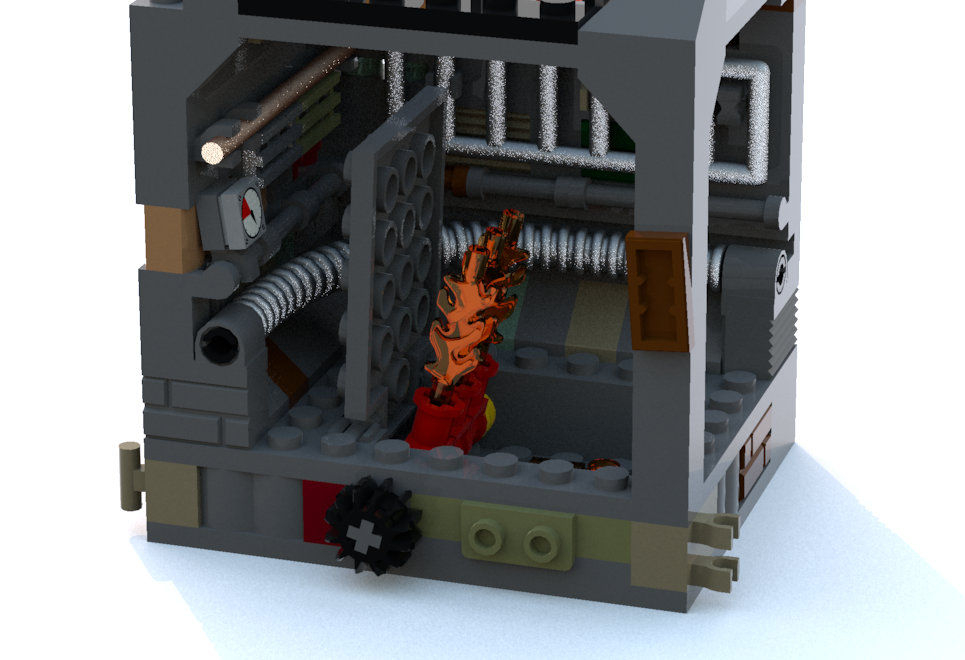 Twist the gear on the bottom of the build sideways, and this will open another trapdoor upwards, revealing some flames! This represents the scene where Hawkeye shoots an explosive arrow at the Outriders on the wall. 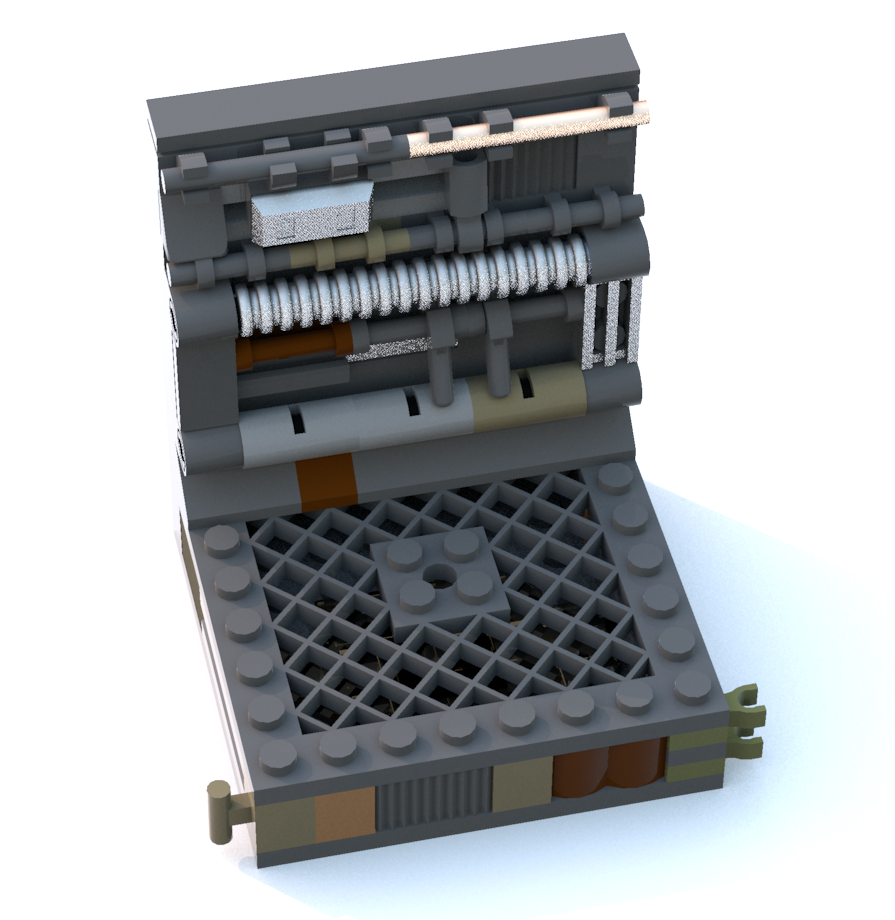 The middle section is just a simple linking area with no play features. It has a detailed wall section and a grate design on the floor. Minifigures can grab onto the piping if they wish. 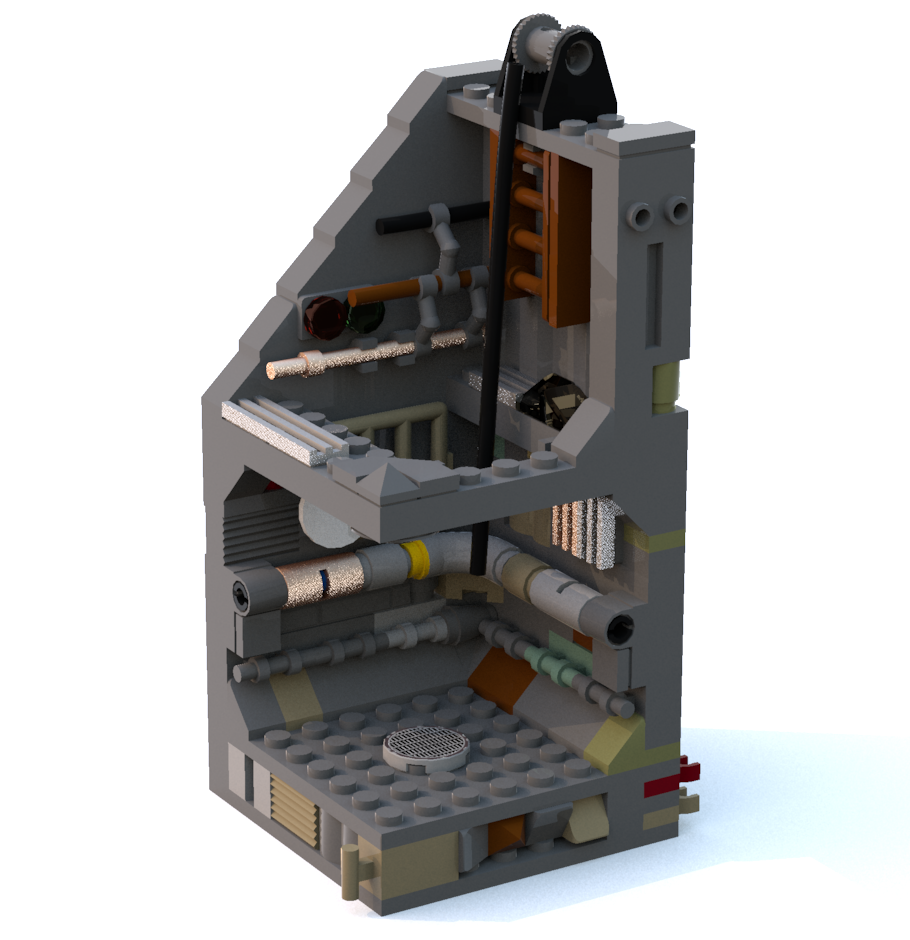 The final section depicts the part where Hawkeye uses a zipline to make a quick escape from the Outriders. It has a two storey design and is the tallest section in the set. 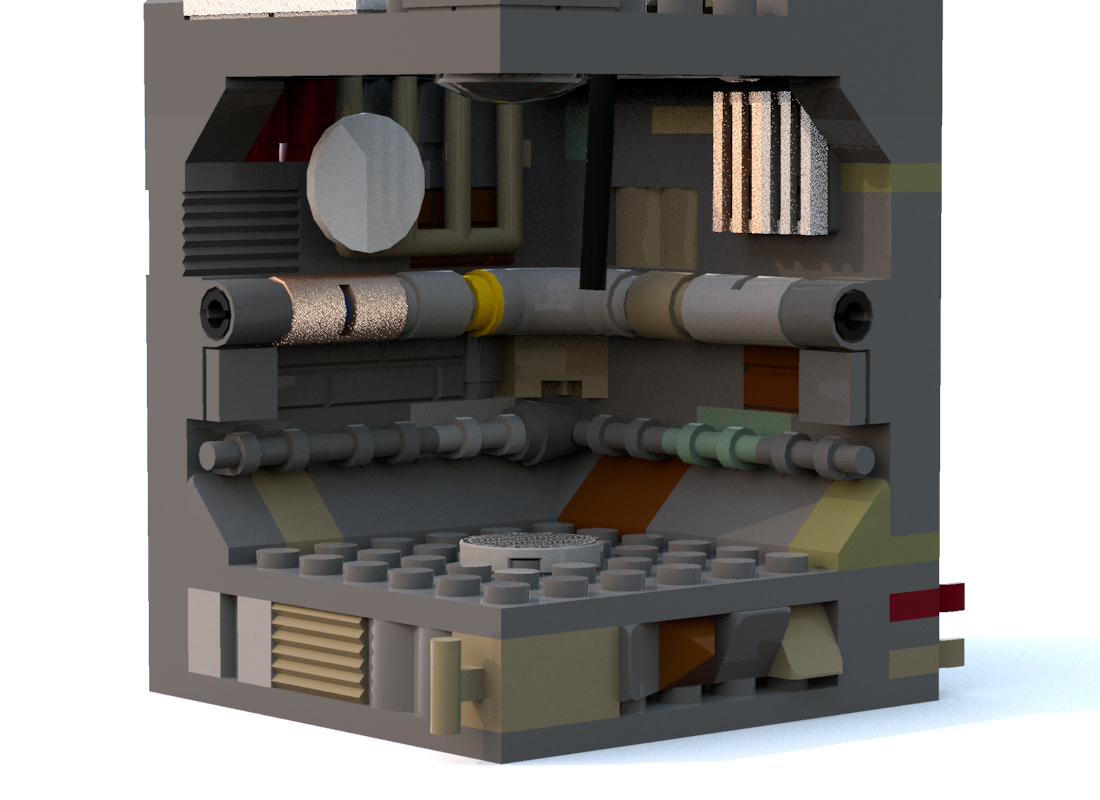 The bottom part has some more messy piping and mechanical detail. There’s a printed 2×2 round tile at the bottom with a grate design. 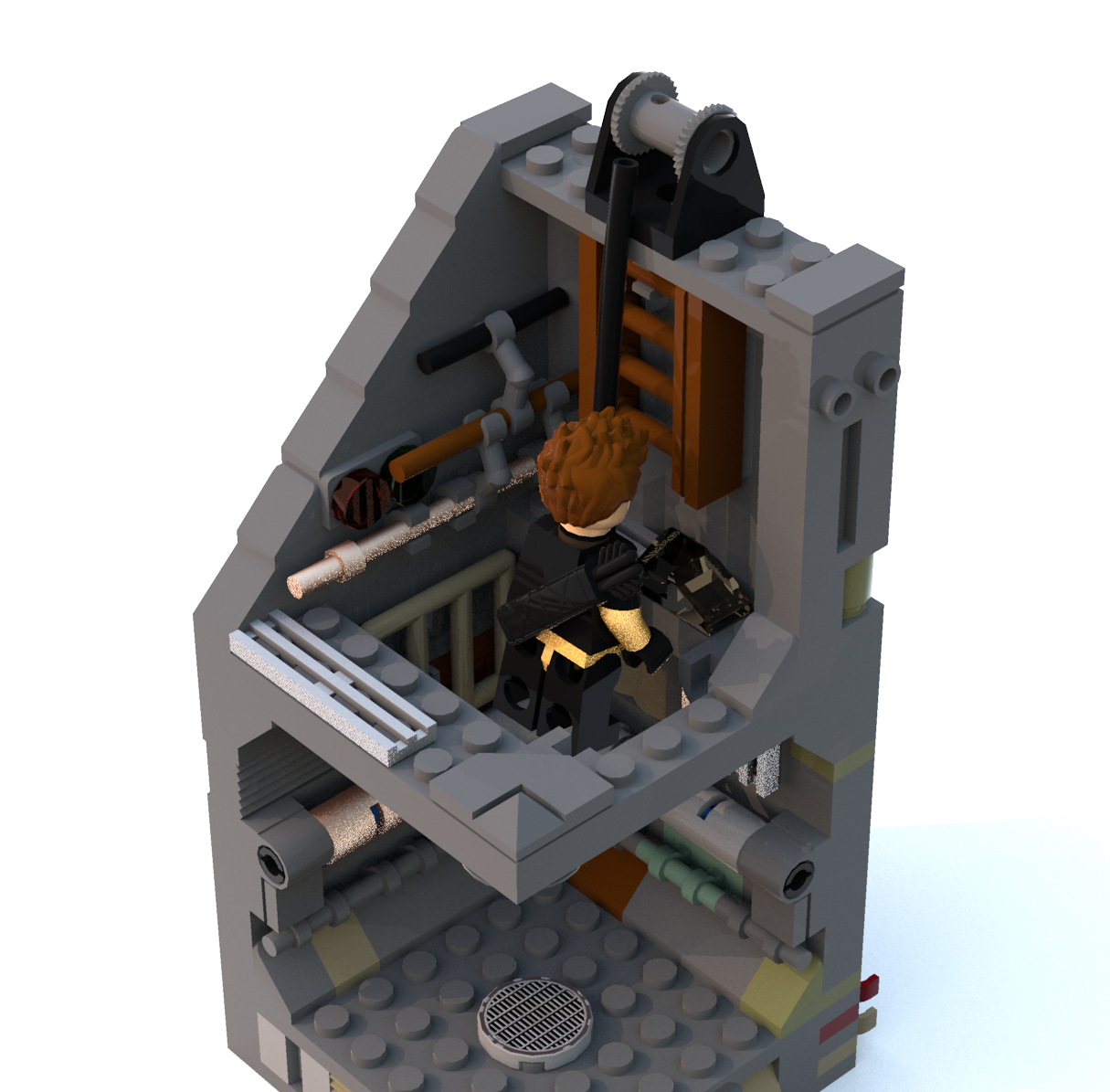 However, the main play feature of this set is the zipline play feature. There’s a winch piece at the top with a string wrapped around it. Hawkeye can hold on to the string and you can turn the winch to pull him up, helping him finish his escape with the gauntlet. This is also the scene where he meets 2014 Nebula. 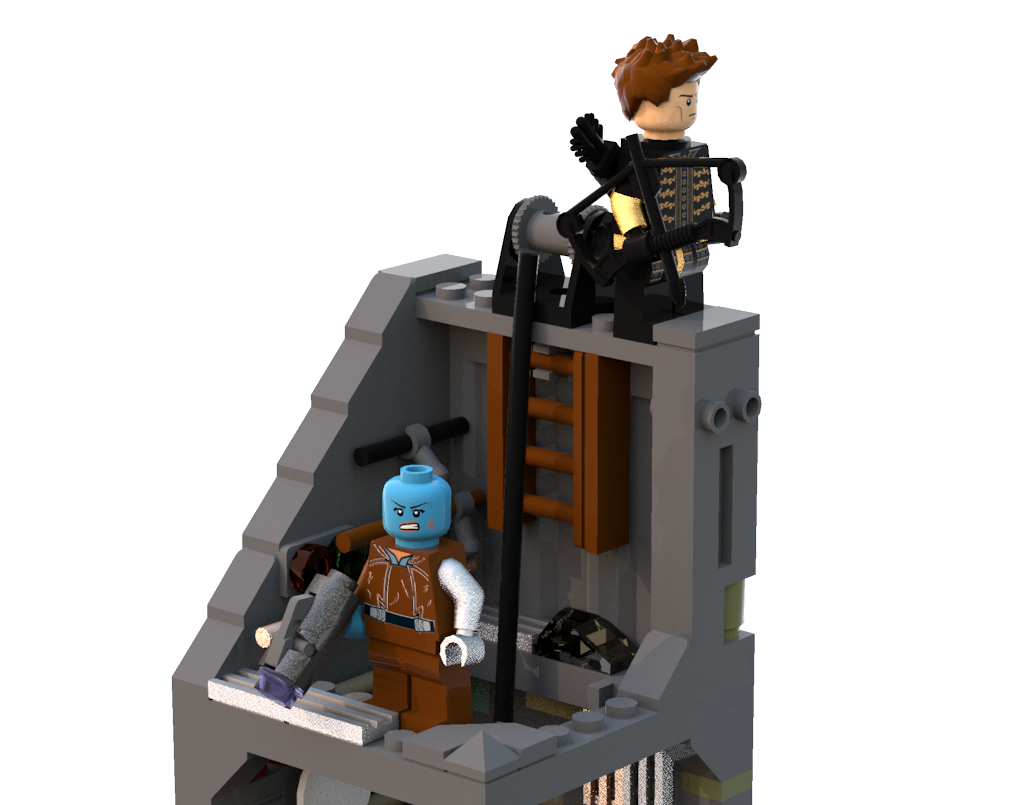 There are spots to place minifigures here, both on the second and top floor. There’s a brown ladder mounted on the wall to help minifigures climb to the top. 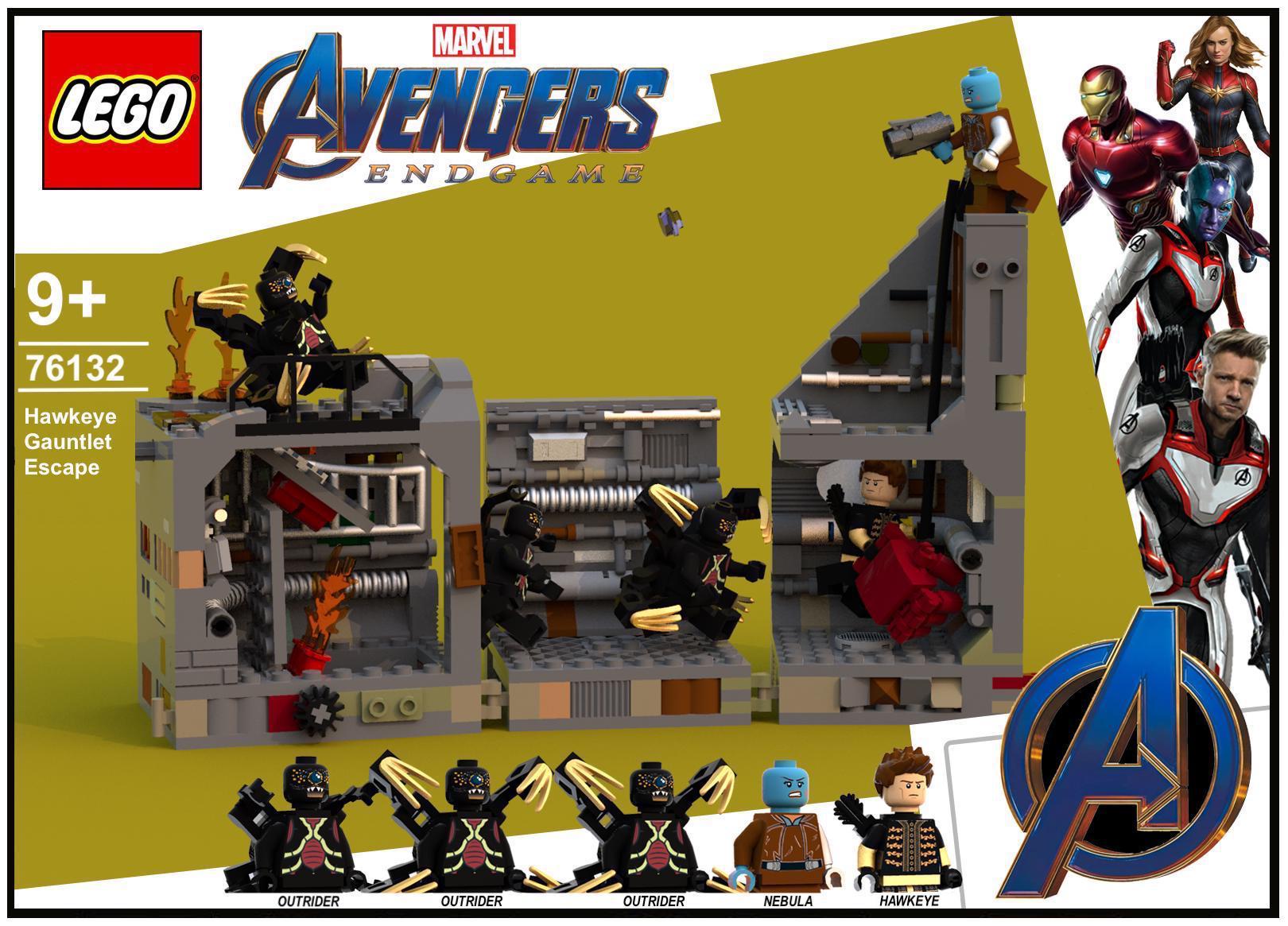 Thanks for reading, and I’ll see you in the next post!