Hey everyone! Today I have a review and unboxing of 5005256 Marvel Superheroes Minifigure Collection, more commonly known as the LEGO Infinity War Bricktober Pack! This pack was released for Bricktober 2018 as a Toys R Us exclusive but Toys R Us sadly shut down this year, forcing LEGO to redo it as a rare gift with purchase. After many months of waiting, I finally got my hands on one of these and today I’ll be reviewing this minifigure collection! Let’s jump right in! 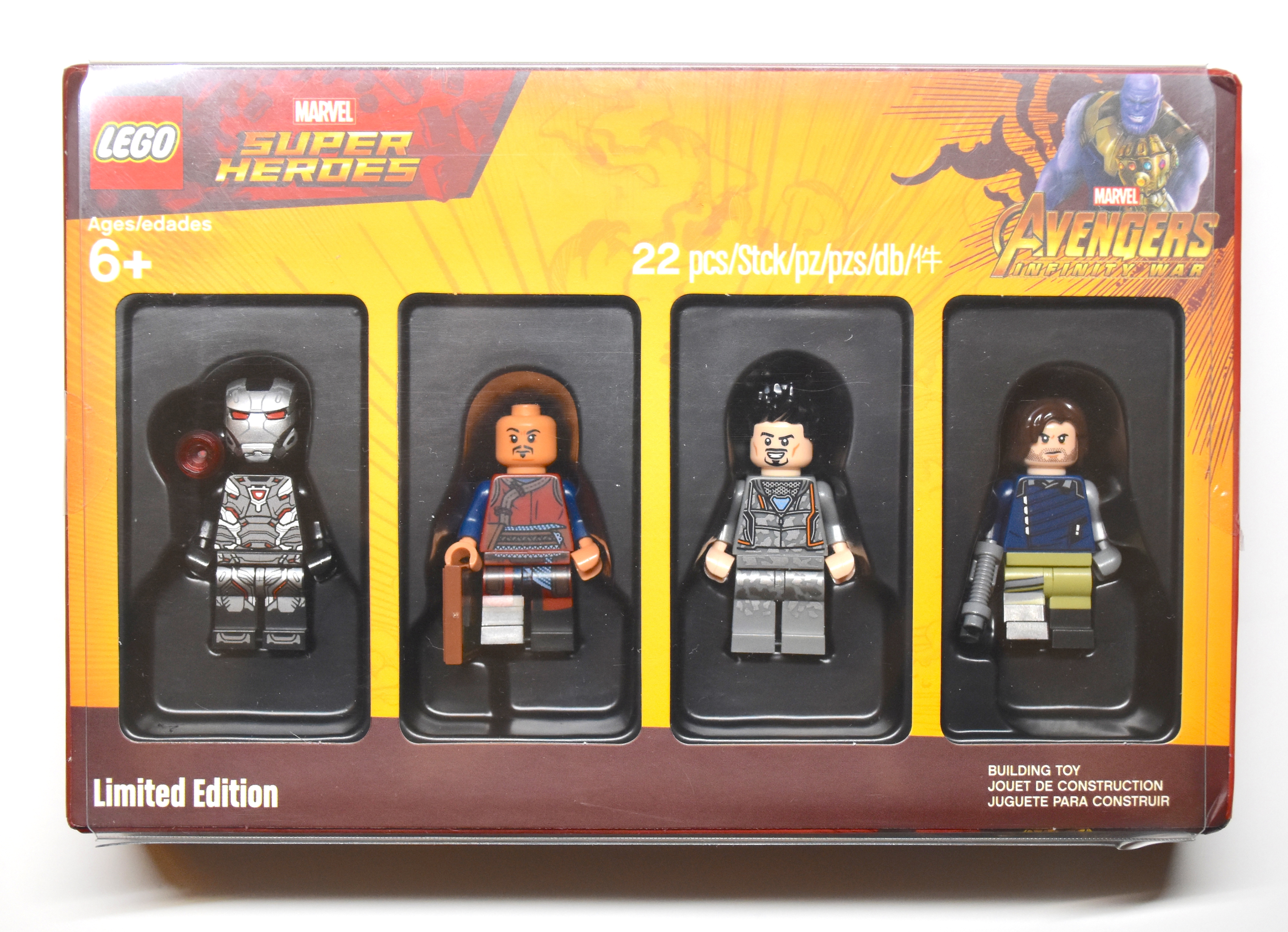 First, let’s unbox the set and take a look! The box is smaller than I expected, but it works perfectly fine as it’s only meant to hold the four minifigures included. It has a red and orange design which matches the style of the regular LEGO Avengers Infinity War sets. The top left corner has the LEGO and Marvel Superheroes logo, while the top right has a picture of Thanos with the Avengers Infinity War logo. It is designated as “limited edition” in the bottom left. 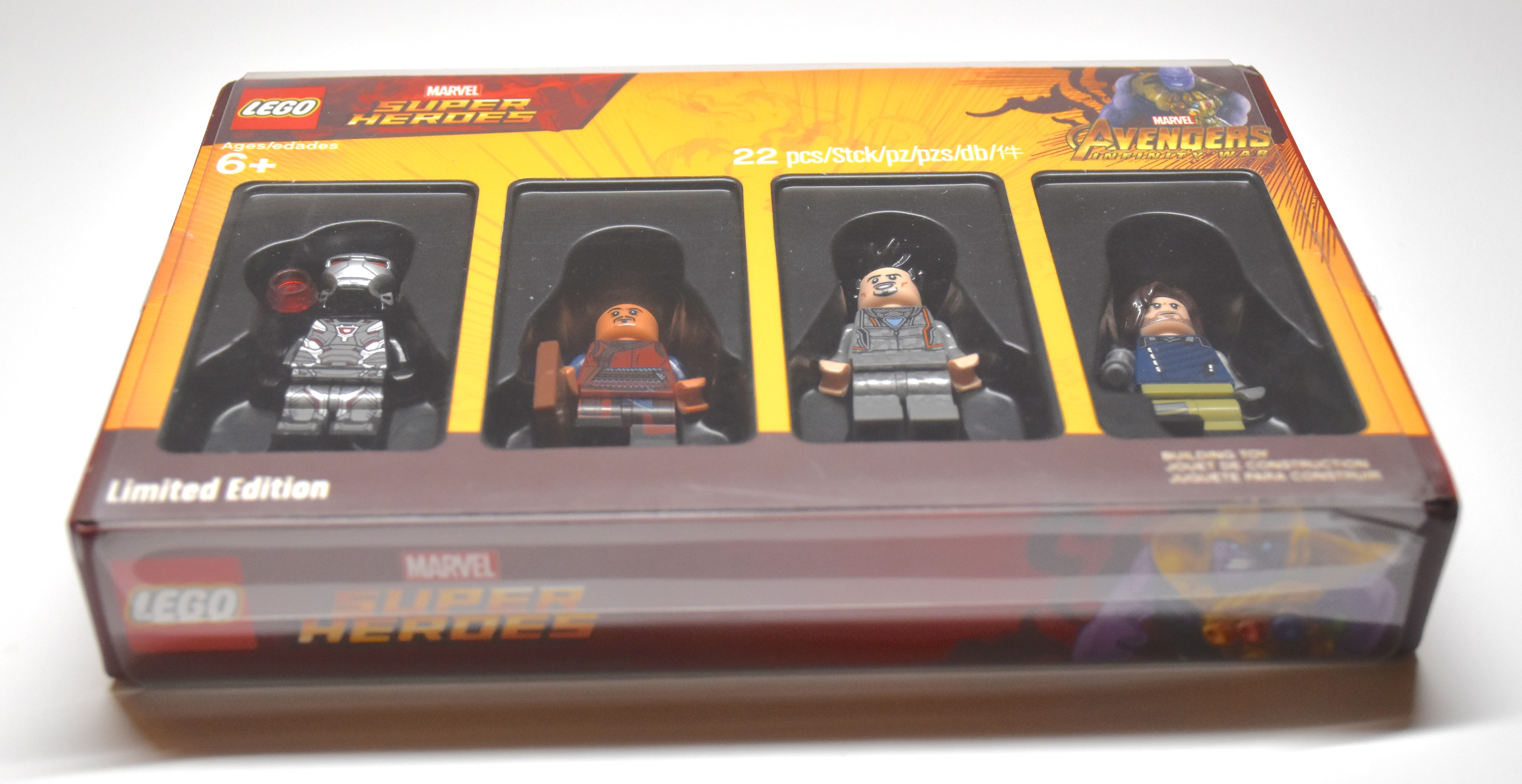 The bottom of the box is dark red. It has another set of LEGO and Marvel Superheroes logos. The bottom right has a graphic of LEGO Thanos with a full Infinity Gauntlet. 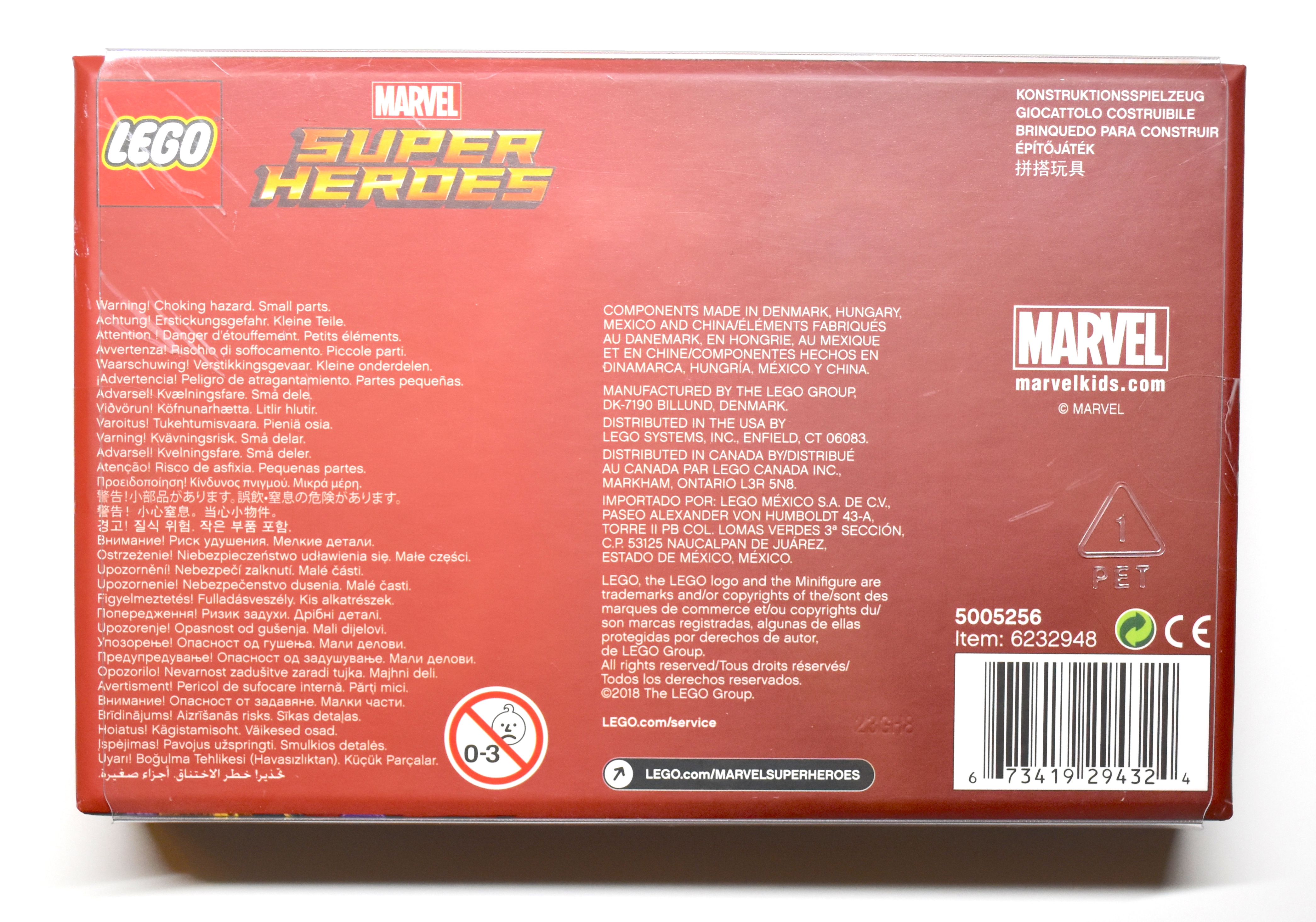 The back of the box just has a bunch of words. Boooooring!

There is actually a clear plastic wrapping around the actual box itself. You have to cut the tape and slide it open to access the minifigures. 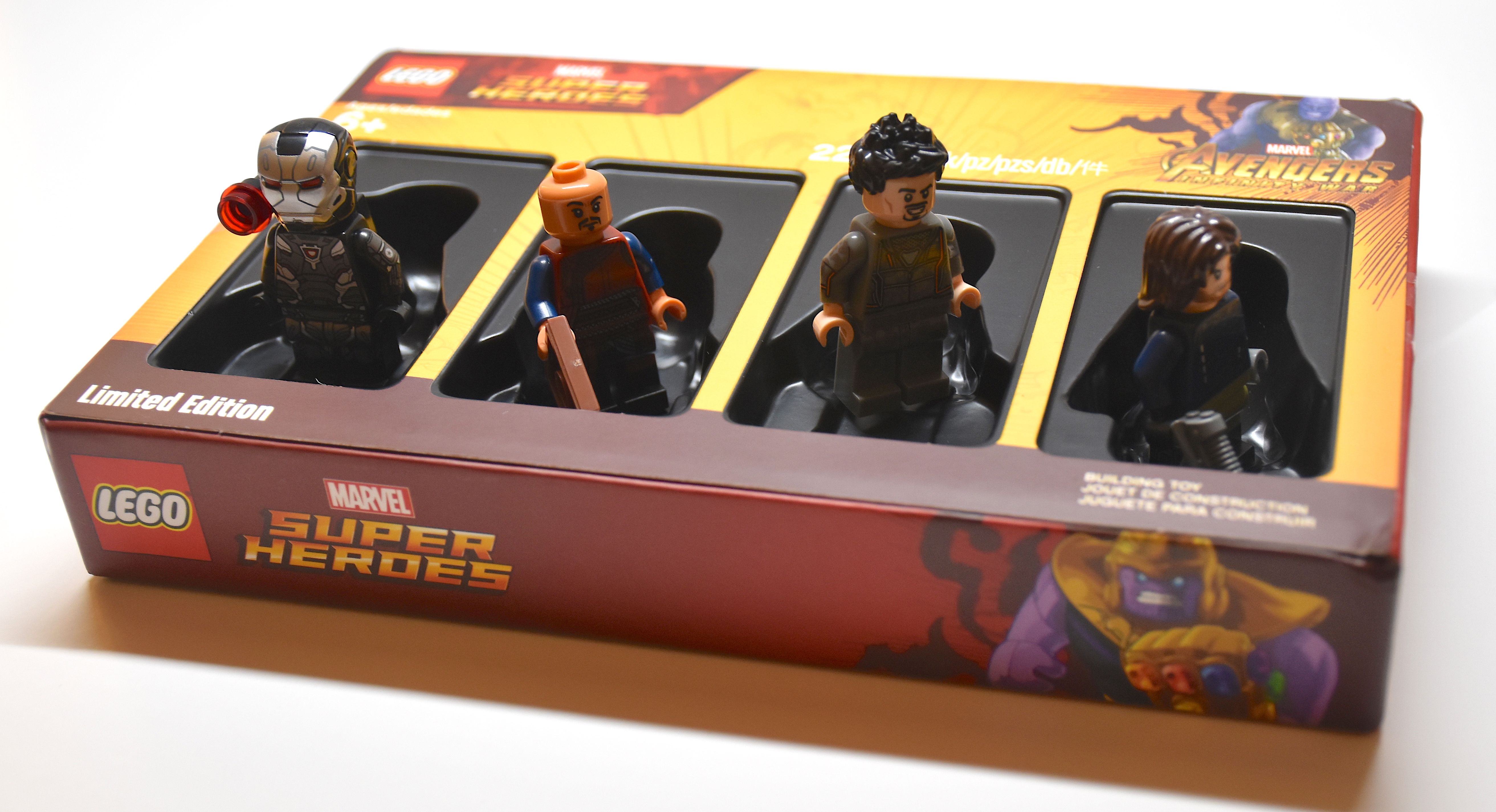 Once that is done, you can just pull the minifigures straight out of the box. These are held in pretty snugly so you do need to use a bit of force to get them out, but nothing too unreasonable. Now, we can jump into the review of each minifigure! 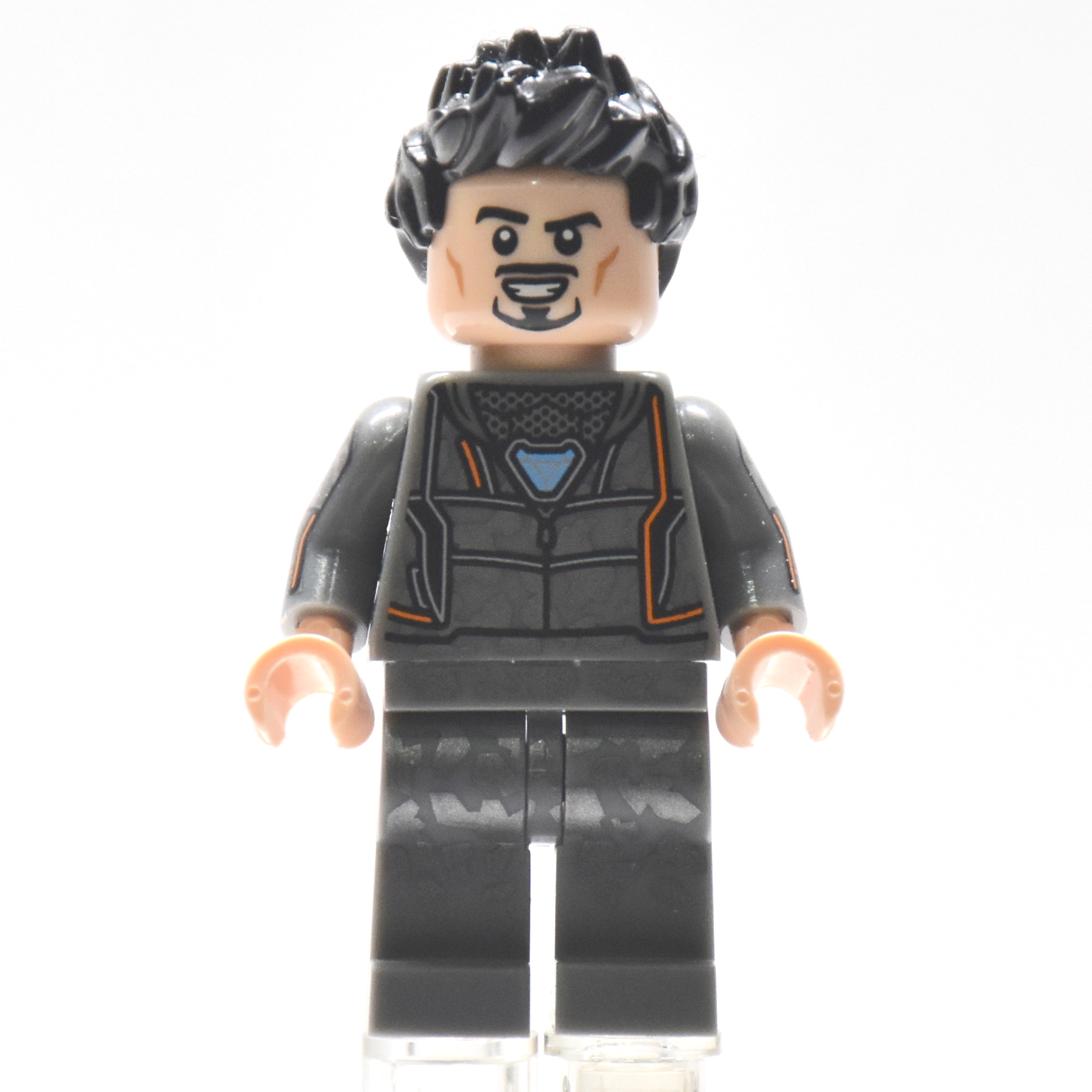 Our first minifigure in the Bricktober Pack is none other than Tony Stark himself, the man who started this great MCU journey. This minifigure is based off his appearance at the start of Avengers Infinity War in his running tracksuit, before being interrupted by Dr Strange and the arrival of the Black Order. Tony has a black spiky hairpiece (a recolor of Thor’s) and he has a new double-sided face. This side has a smile along with his signature smile, and I personally think this is the best LEGO Tony Stark head we’ve had so far. His torso and legs are dark grey, and they have an accurate silver camouflage design that reflects lighting. Tony also has the arc reactor of his MK50 suit printed on the torso.

Tony’s tracksuit in the movie is indeed a dark grey, but I feel that LEGO’s dark grey color looks a little light, especially since the lighting in some scenes makes his suit look even darker. I wonder if black might have worked slightly better. 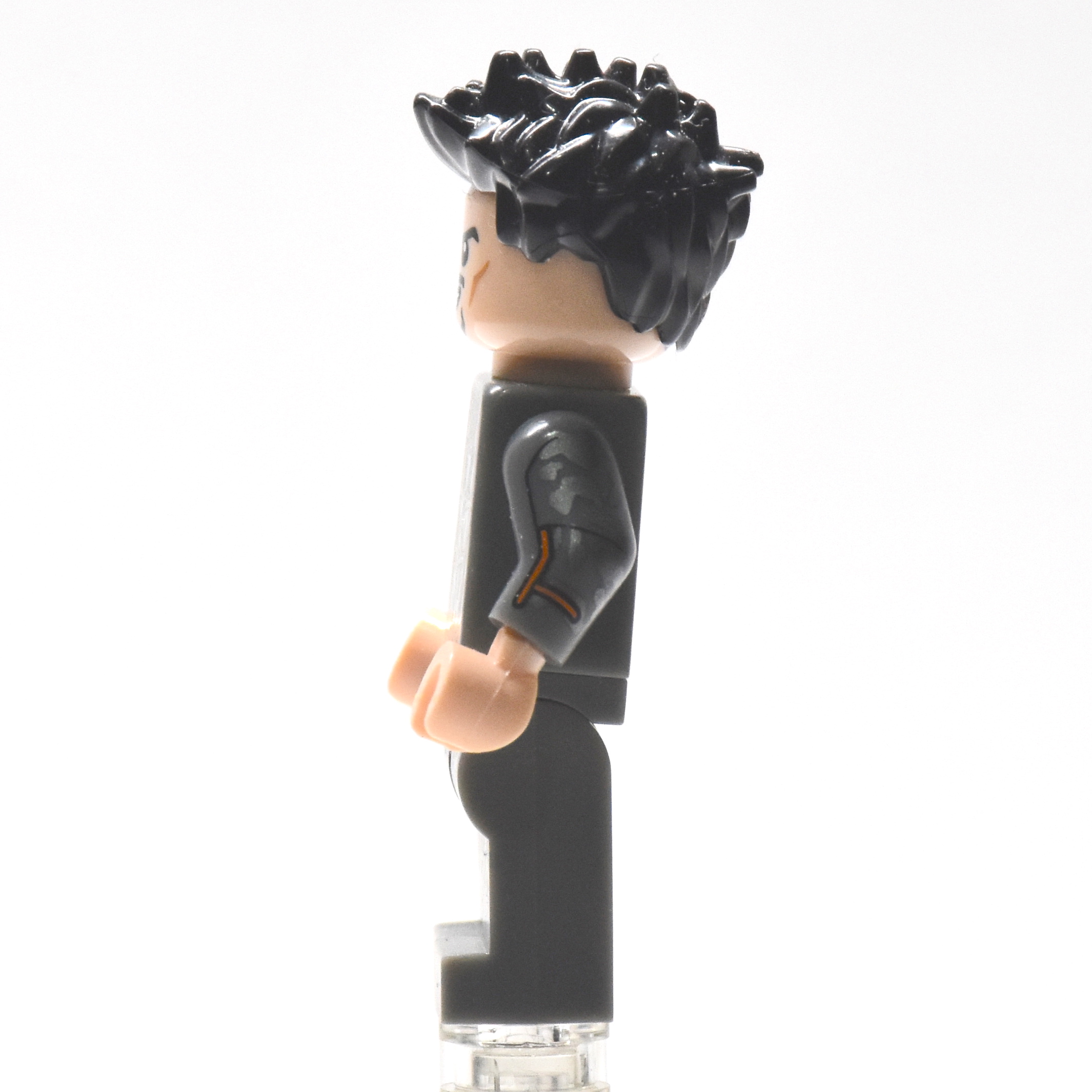 Here’s a view of Tony Stark’s left side. His arms is printed with some more silver camouflage design, along with a continuation of the orange highlights that are also present on his torso. 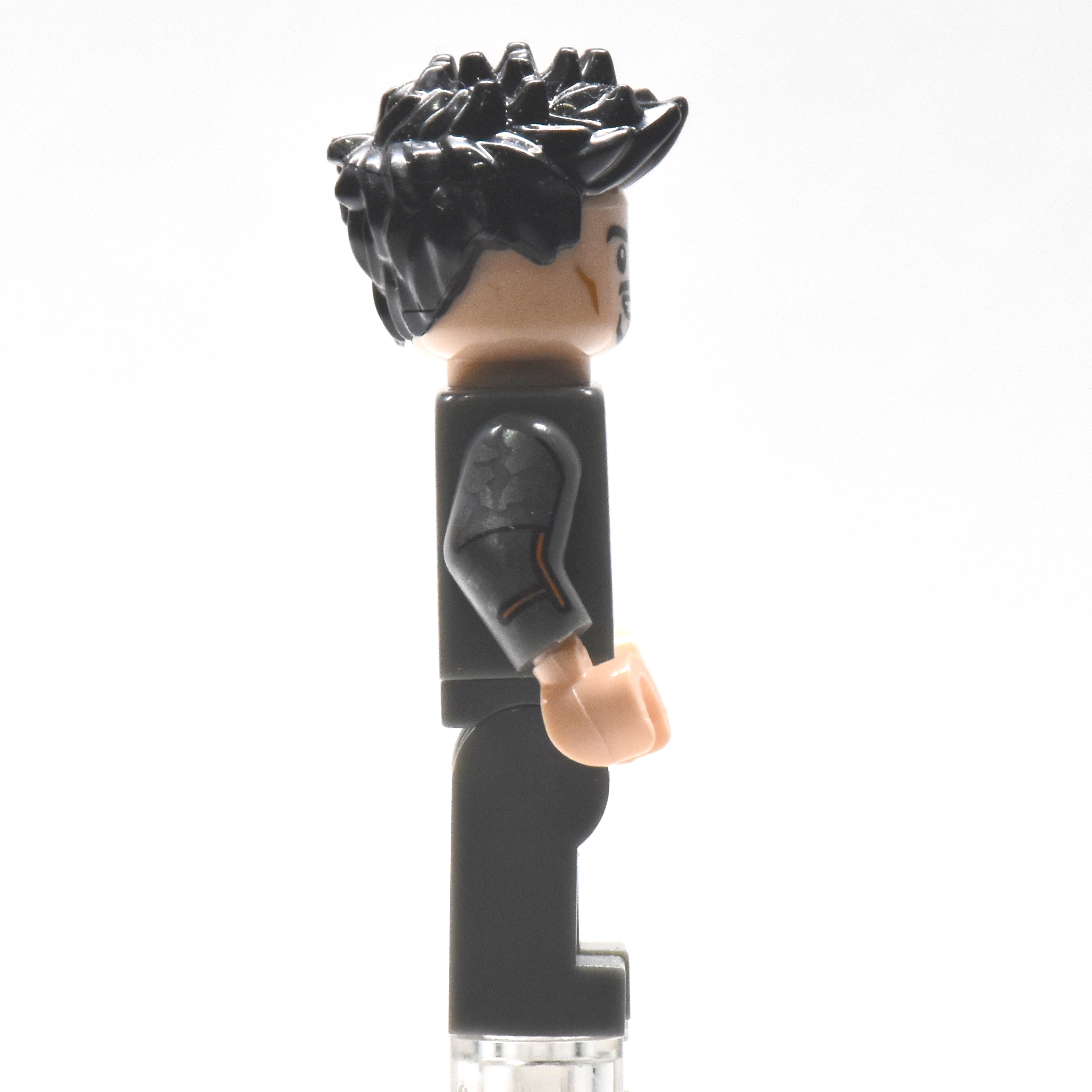 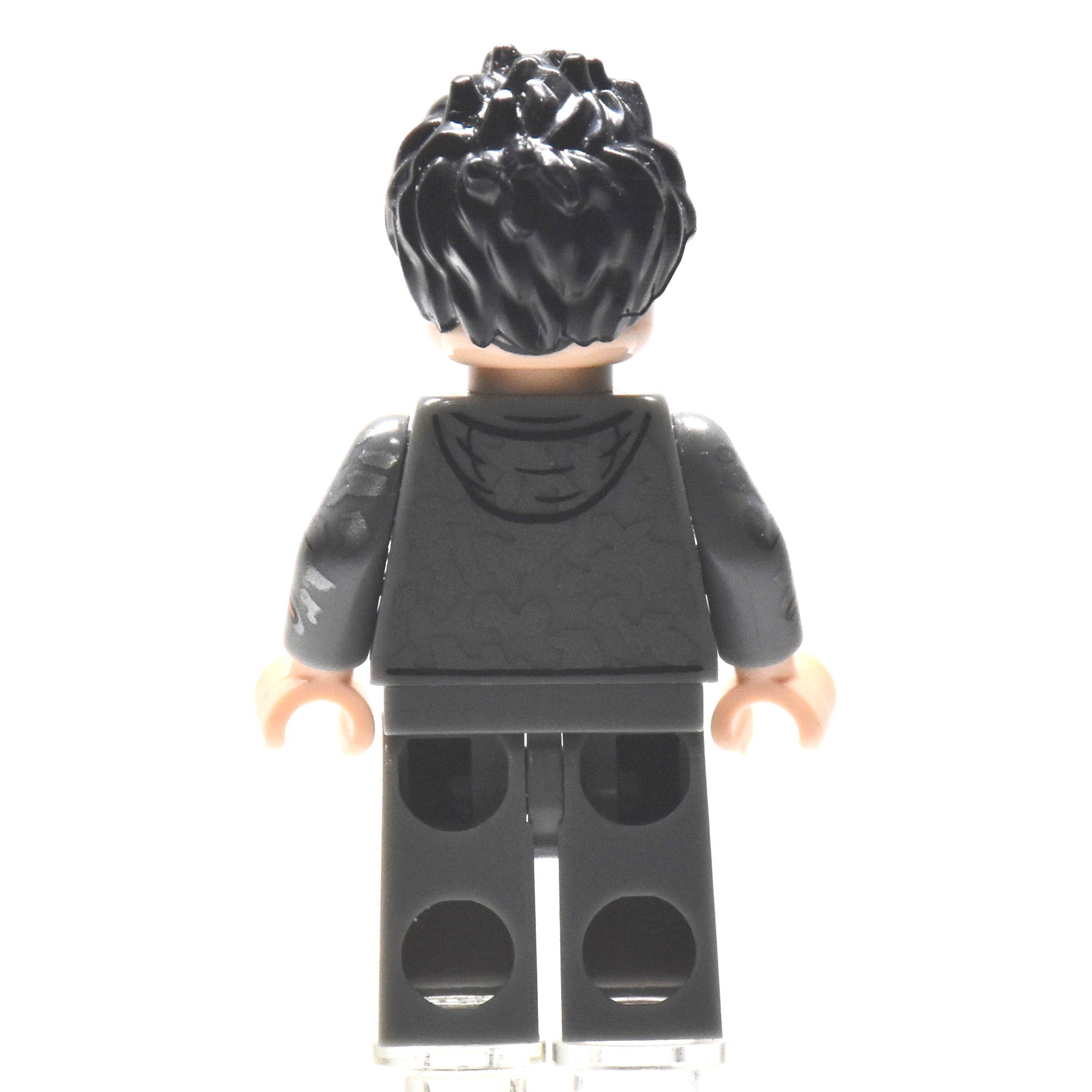 Here’s the back of LEGO Tony Stark. It has more silver camouflage printing and a printed hood. You can also see the back of Tony Stark’s black hairpiece. 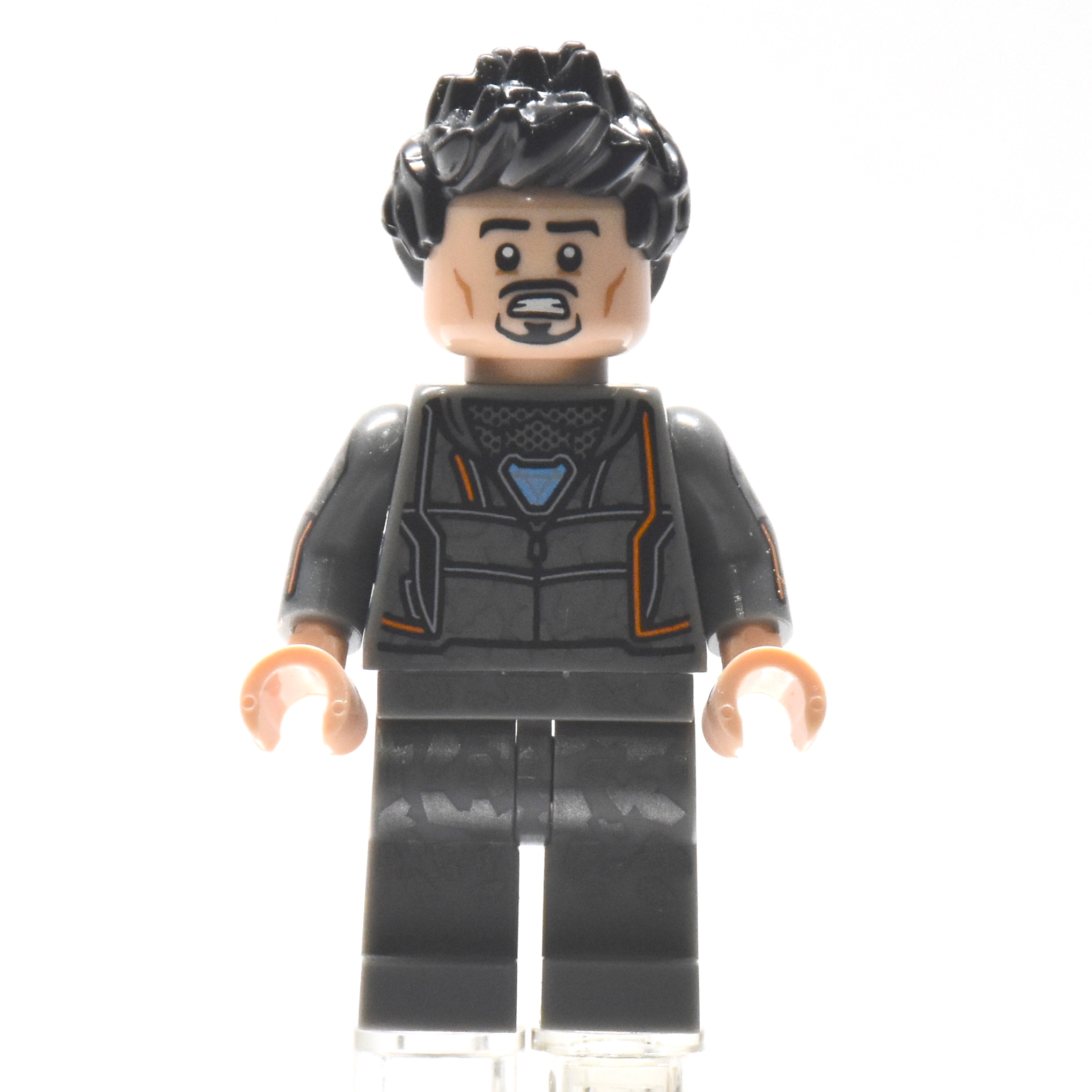 Here’s Tony Stark’s alternate face, which shows him seemingly scared. It looks fantastic of course but I personally would have liked one of the faces to have Tony Stark’s signature glasses, which he wore in the corresponding Infinity War scene. 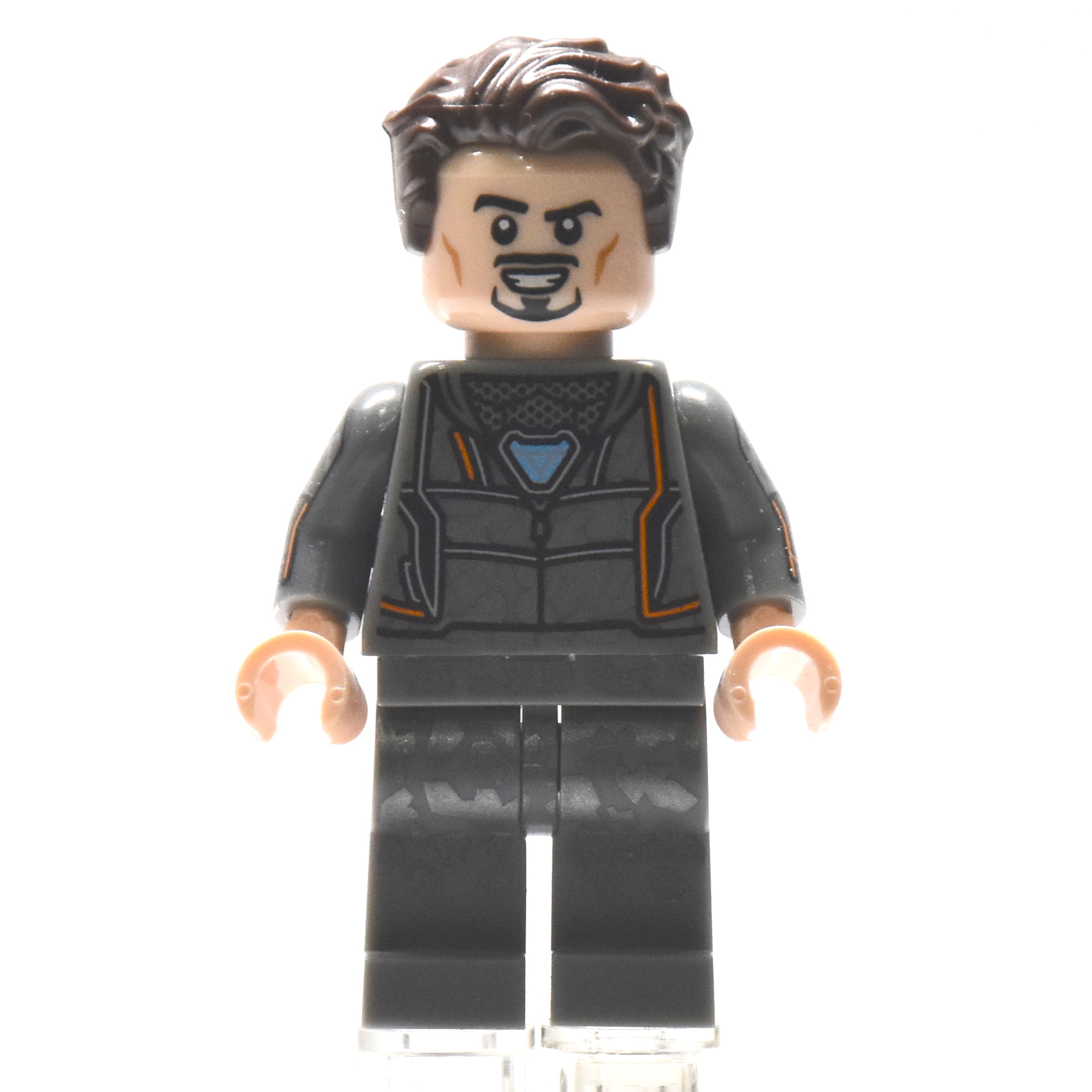 This Tony Stark minifigure is great overall, but there’s one change I would make to it. Personally, I think this spiky black hairpiece does not suit Tony Stark’s Infinity War hairstyle at all. Here I have placed a shorter dark brown LEGO hairpiece and I think it looks much better. Bear in mind this piece is NOT included. 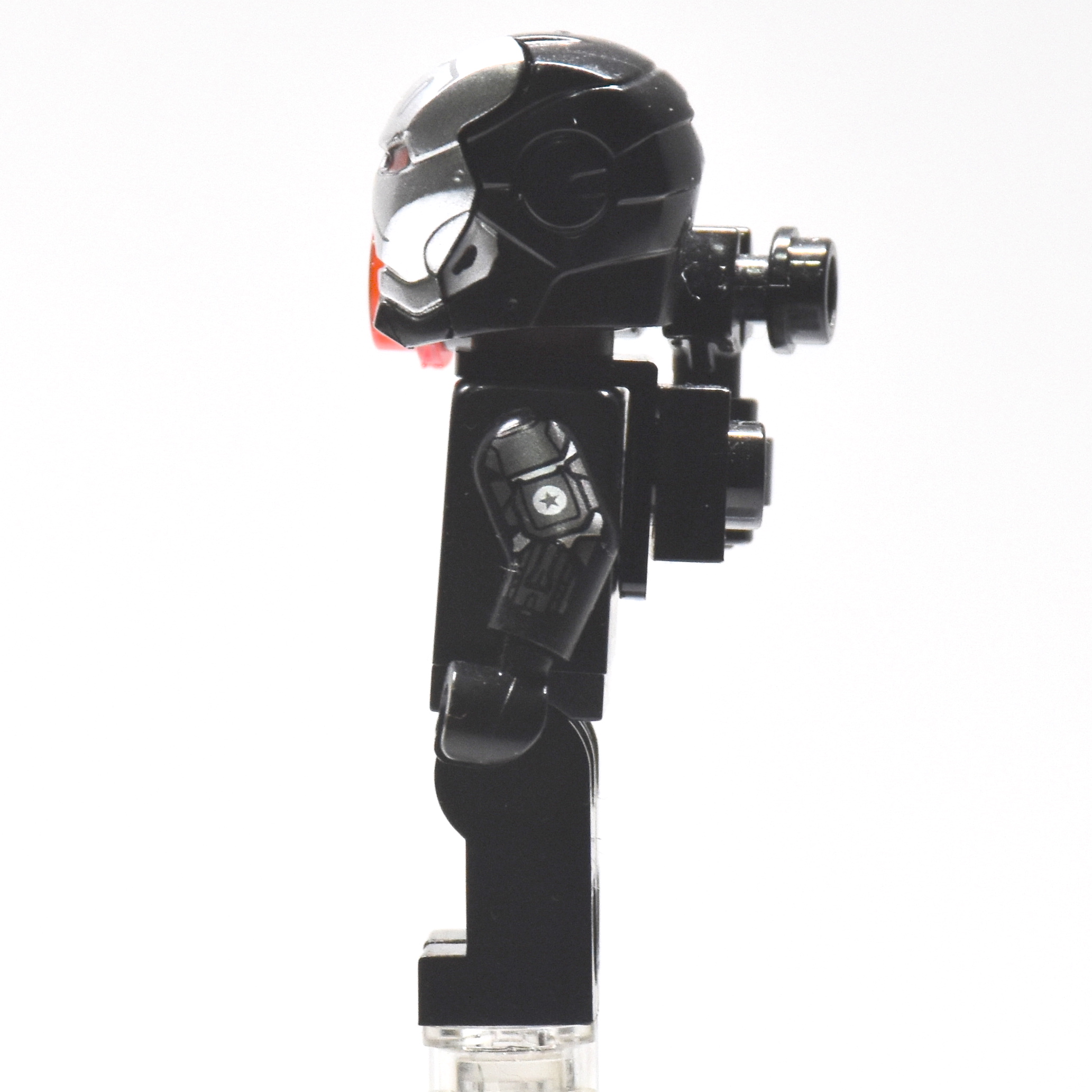 War Machine has printed arms. His left arm continues the gunmetal grey prints, along with a printed wrist machine gun and a military star (which is accurate to the movie design). 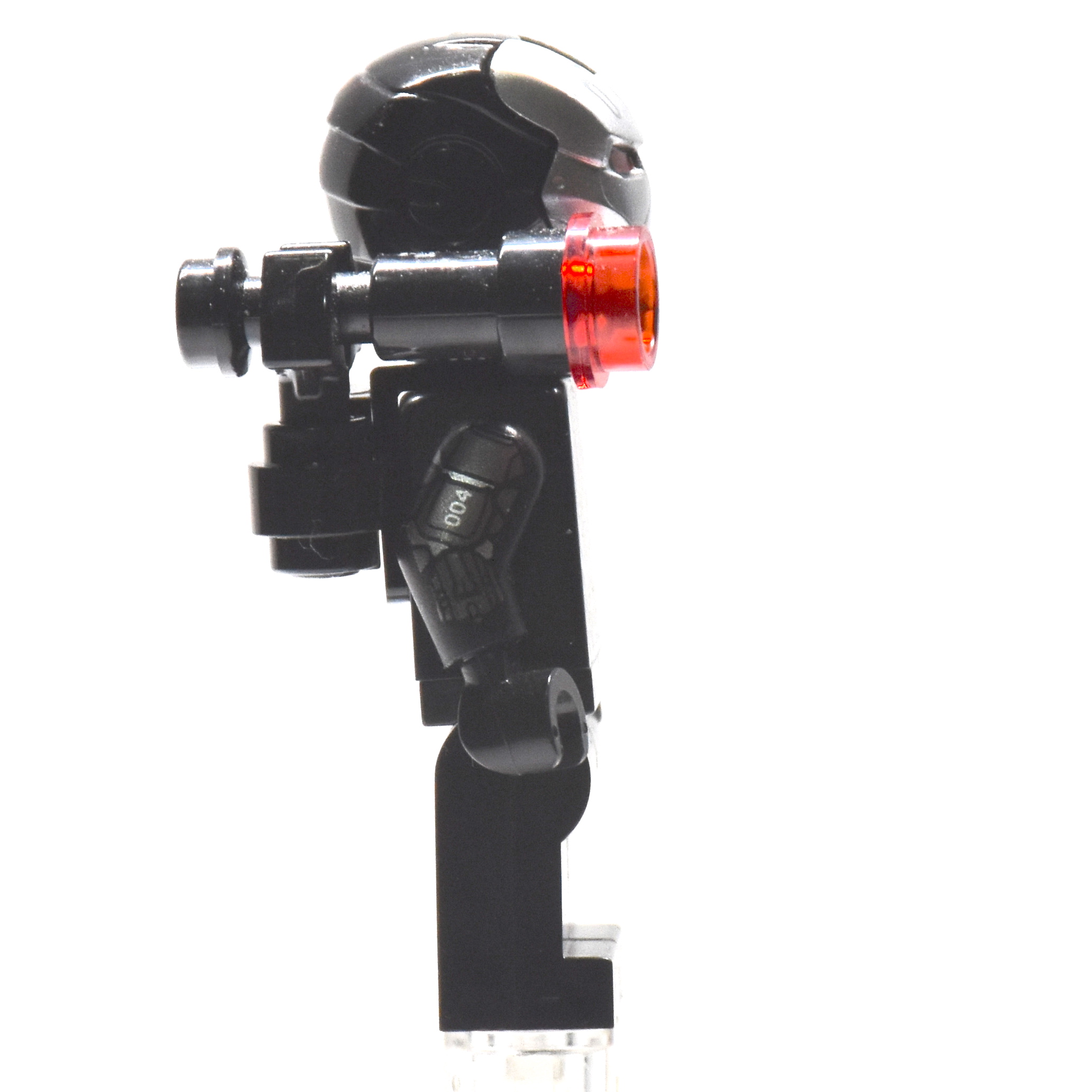 War Machine’s other arm has a machine gun print and a “004” printed, designating this armor as the War Machine Mark 4 suit. 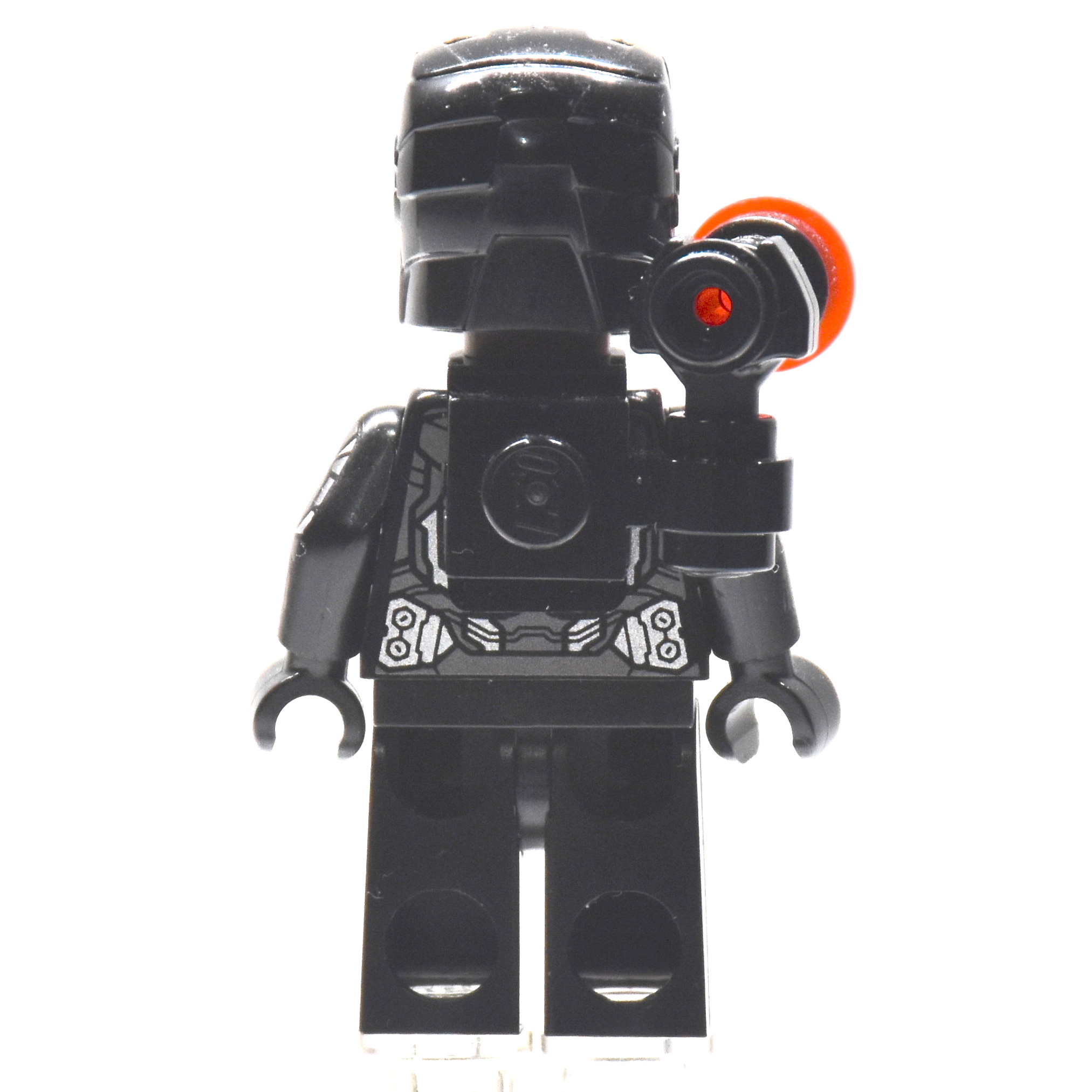 Here’s the back of the LEGO War Machine minifigure. His iconic shoulder cannon is mounted on his back so obscures some of the back printing. 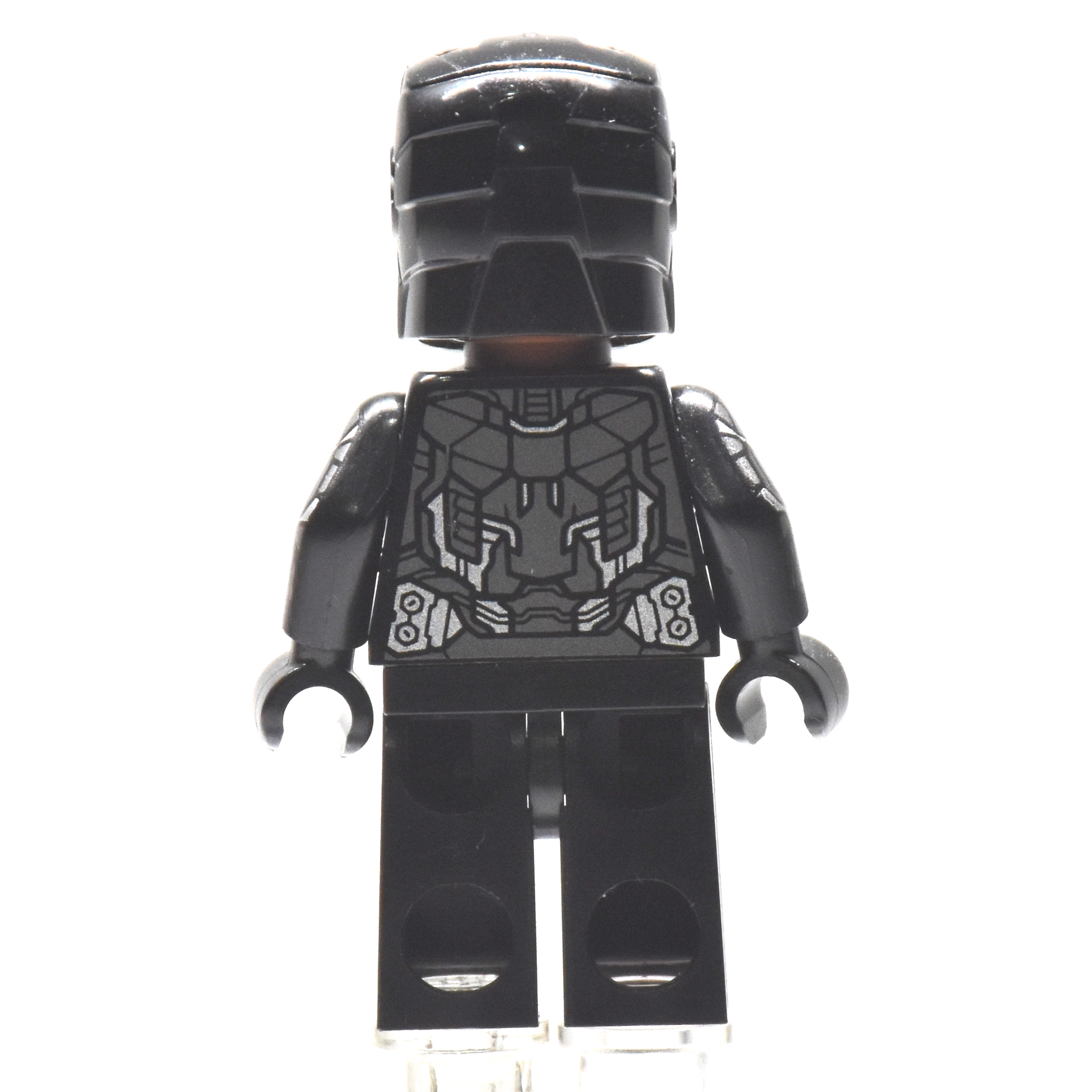 Here’s the back print in its entirety. It looks pretty good, and it’s a bit of a shame that it’ll mostly be covered up. 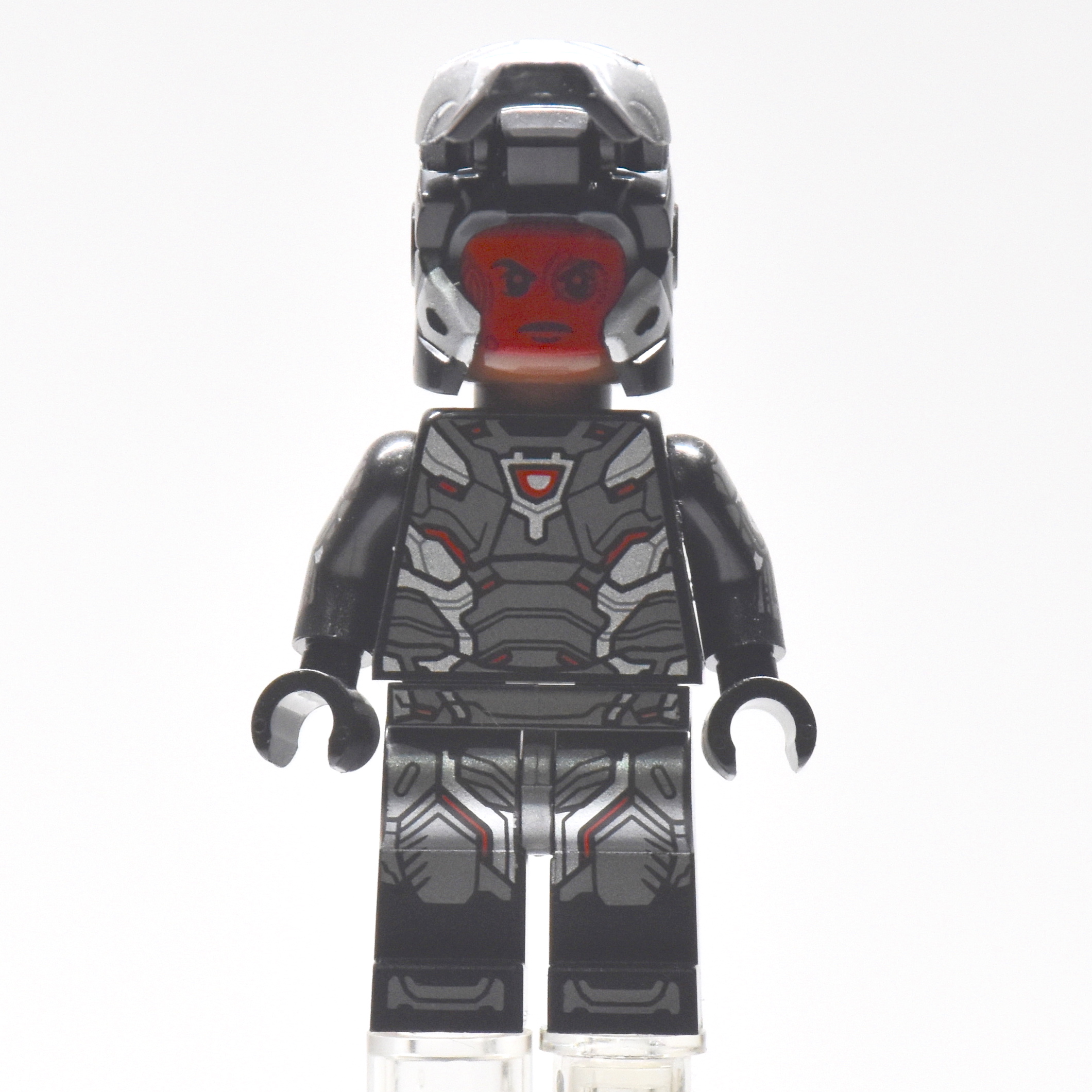 Here’s War Machine’s face print. You can flip open the faceplate piece (as you can with all LEGO Iron Man helmets) and you can see the silver prints on the base helmet. 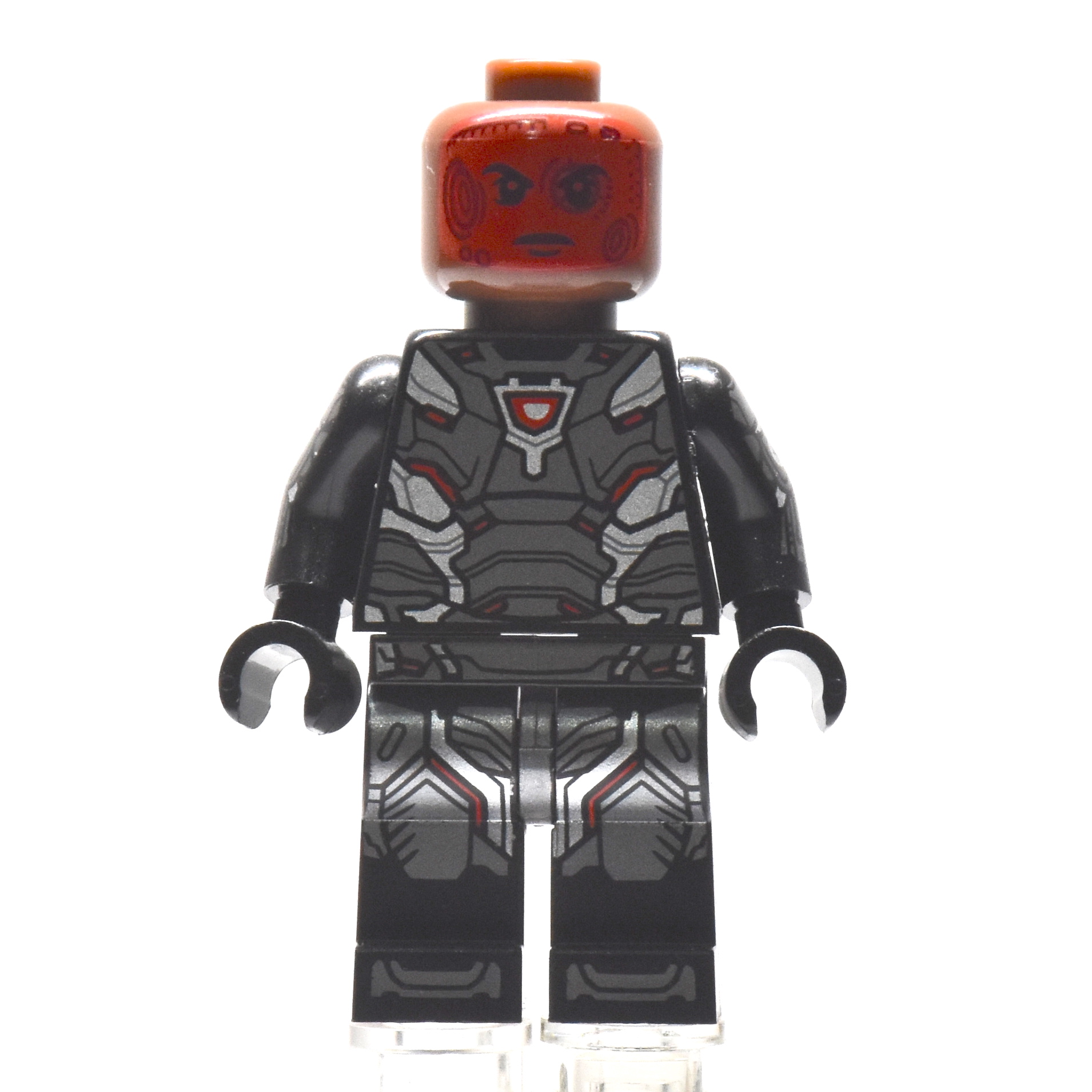 War Machine’s head is double-sided. This side has a printed red HUD (heads-up display), which is in the same style as LEGO Iron Man’s from sets 76107, 76108, and 76131. He also has a fierce expression. It looks great but it’s worth noting that War Machine’s HUD in the movies is not red. Still, it matches War Machine’s helmet’s red lenses. 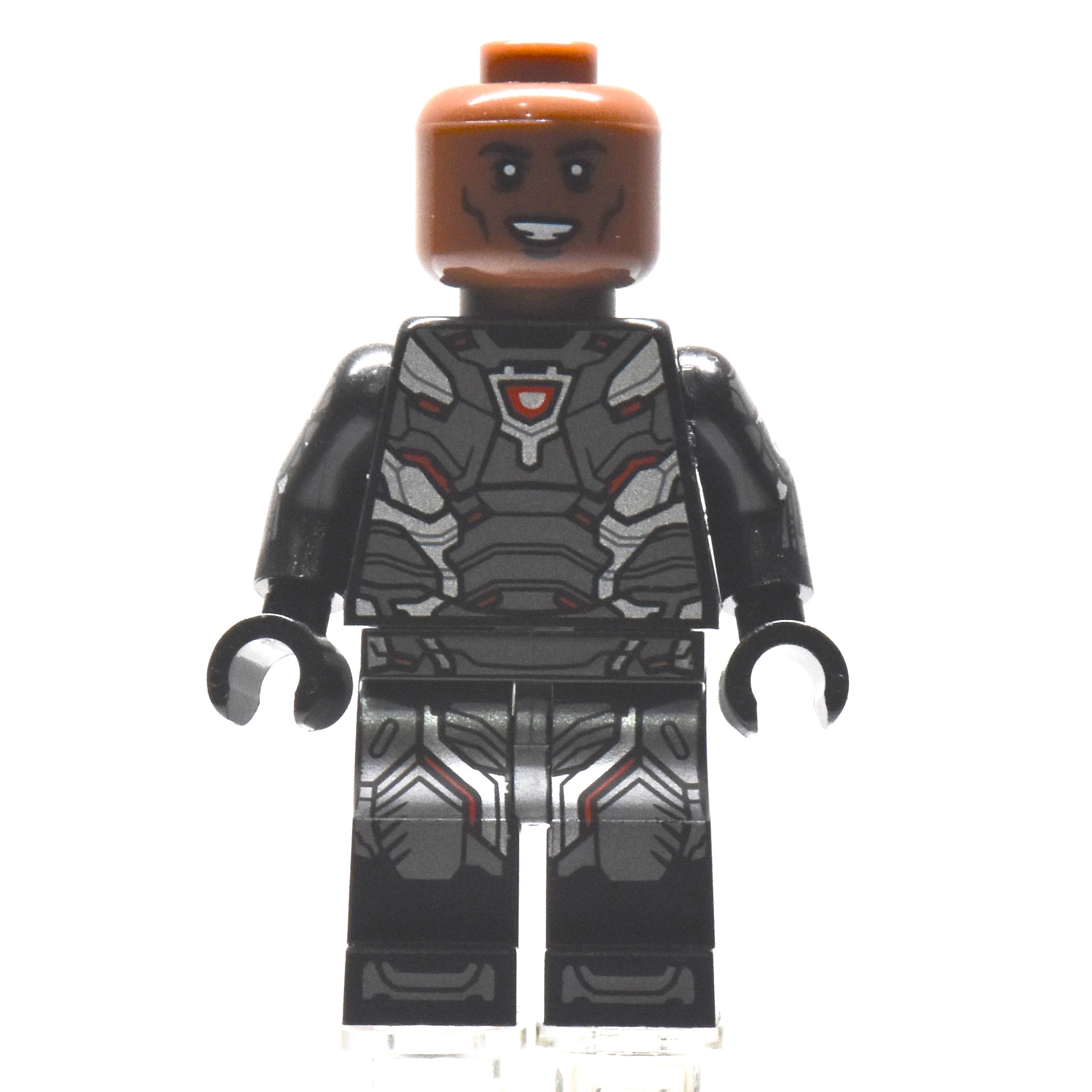 The other side shows Rhodes in his regular look, with a smile on his face. In my opinion, this is the most accurate War Machine face so far, as it looks suitably skinny and has the Don Cheadle look. I do wish he wasn’t smiling so big though as War Machine doesn’t usually smile so big in the movies. This minifigure head also appears in 76124 War Machine Buster. 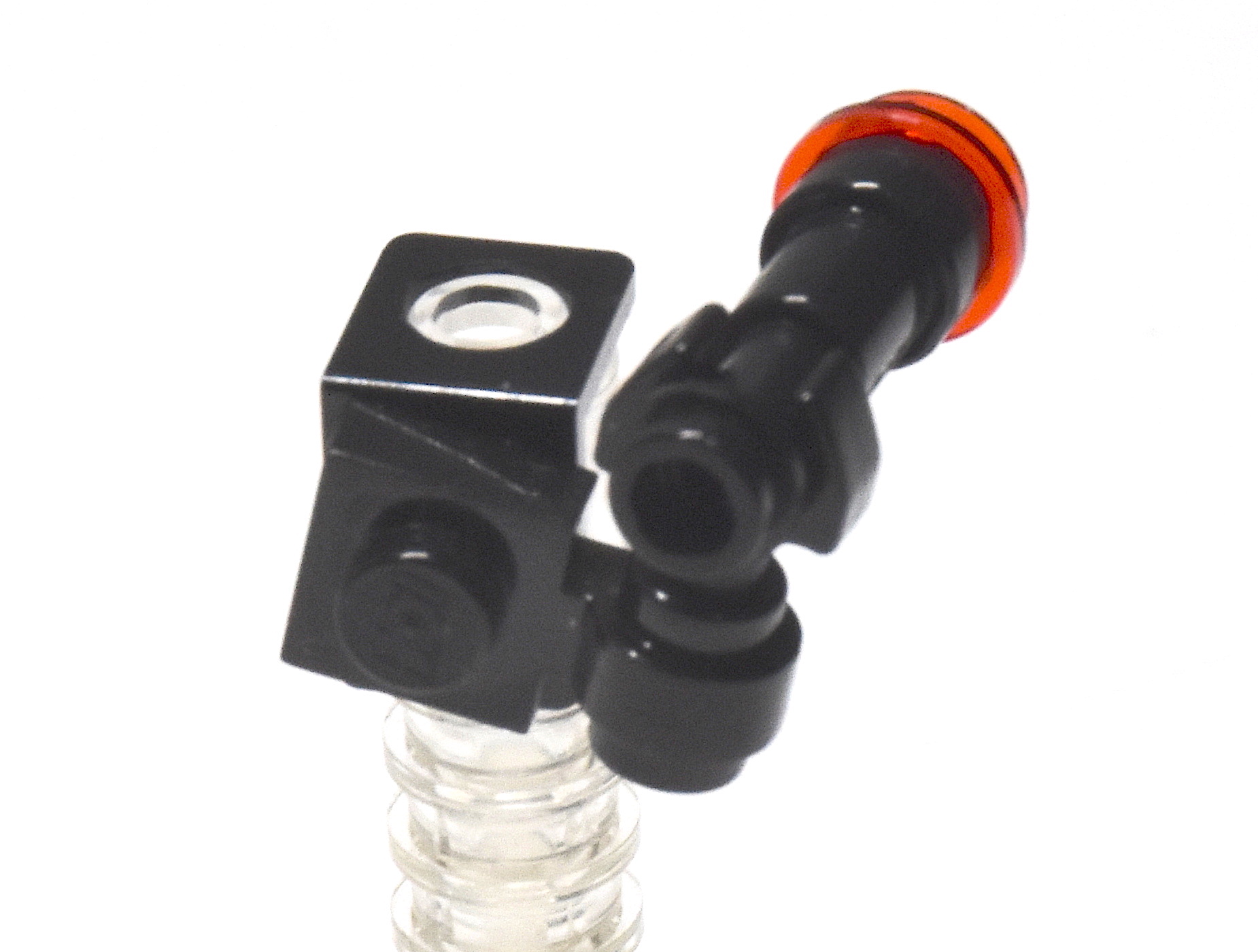 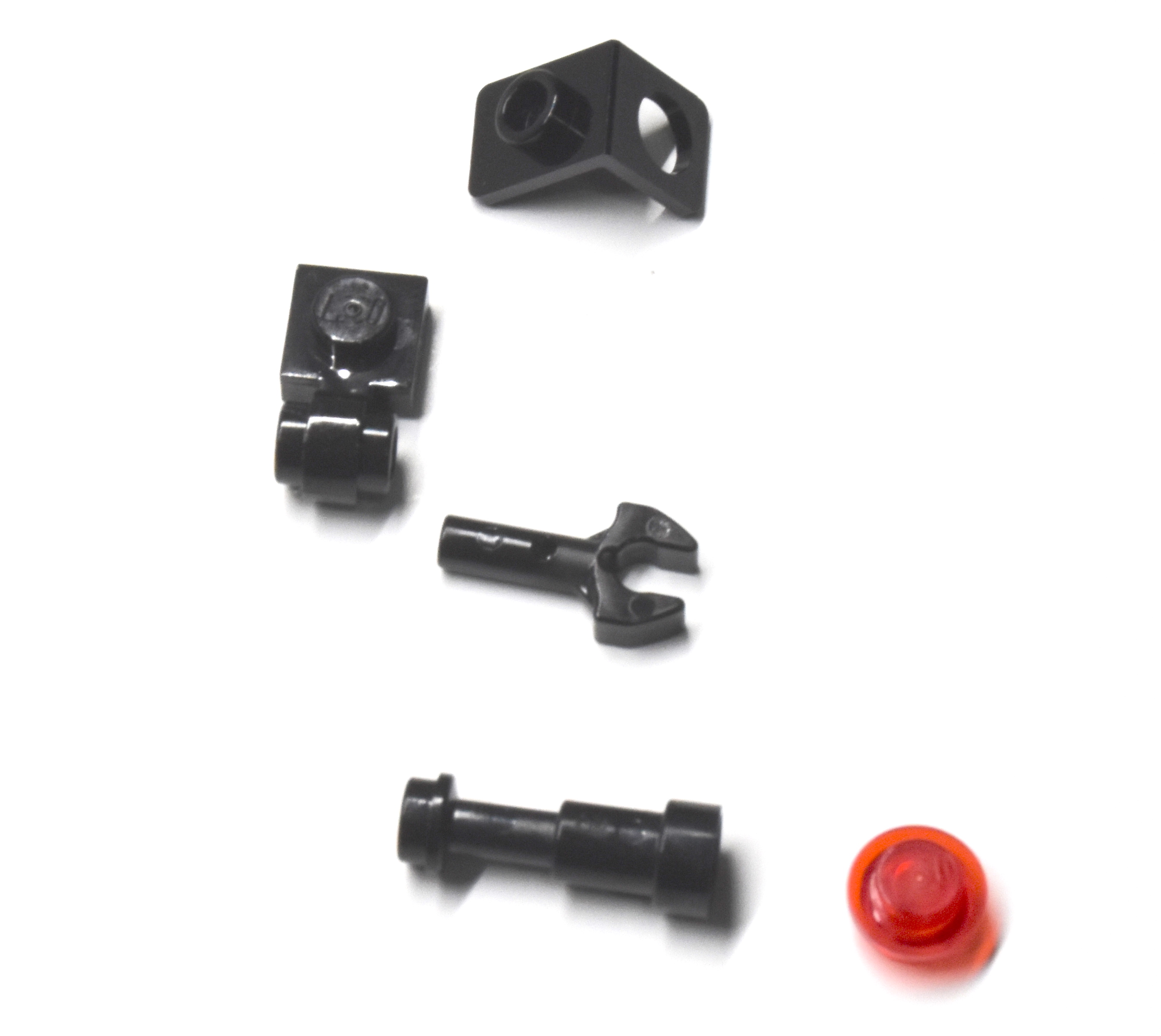 It’s made from five pieces and attaches via the minifigure’s neck. It looks good when mounted on the minifigure and I’d say this is an improvement from the shoulder-mounted stud shooter in 76051 Super Hero Airport Battle. 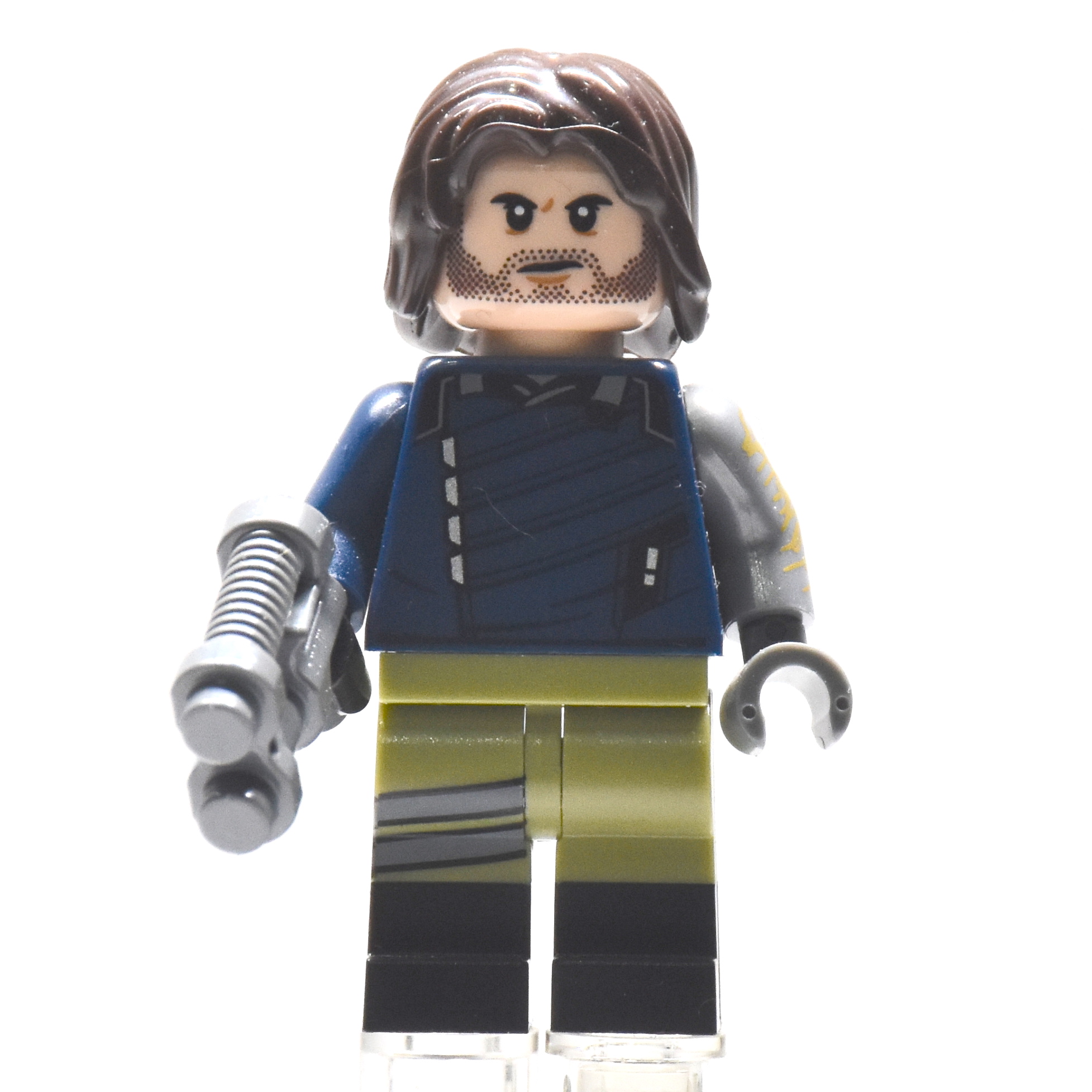 The next minifigure is Captain America’s good friend Bucky Barnes, formerly known as the Winter Soldier. Once again, this is based on his look in Avengers Infinity War, sporting an outfit given to him by the Wakandans. He has a long-ish dark brown hairpiece, along with a determined expression. He has a dark blue torso with some simple but accurate printing on it, along with dual-molded legs. His legs depict olive green pants with black boots, along with a printed dark grey holster on the right leg. 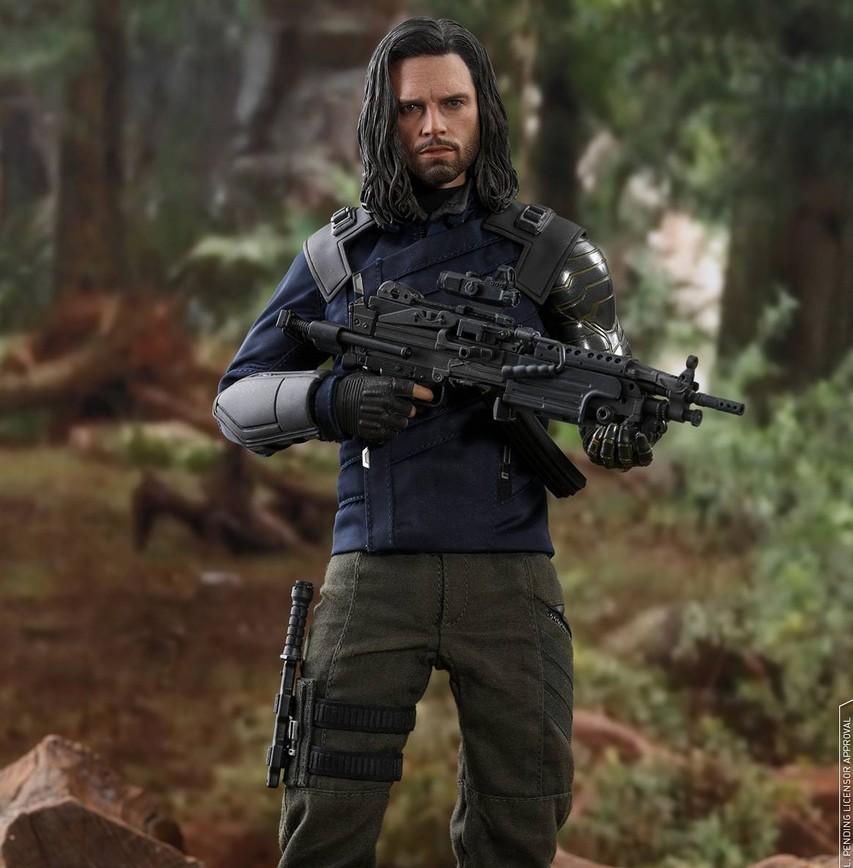 However, I’d say the minifigure is not completely accurate. I personally find the hairpiece is a bit too short, and I think a dark brown recolor of Old Luke Skywalker’s hair from 75200 would have worked better. Furthermore, I think the face print doesn’t exactly look like Sebastian Stan, and while I understand why they went with olive green pants, it’s a bit too bright in my opinion. If you would like to upgrade this minifigure, I would suggest using Sirius Black’s dark brown hairpiece from the upcoming set 75945 Expecto Patronum. 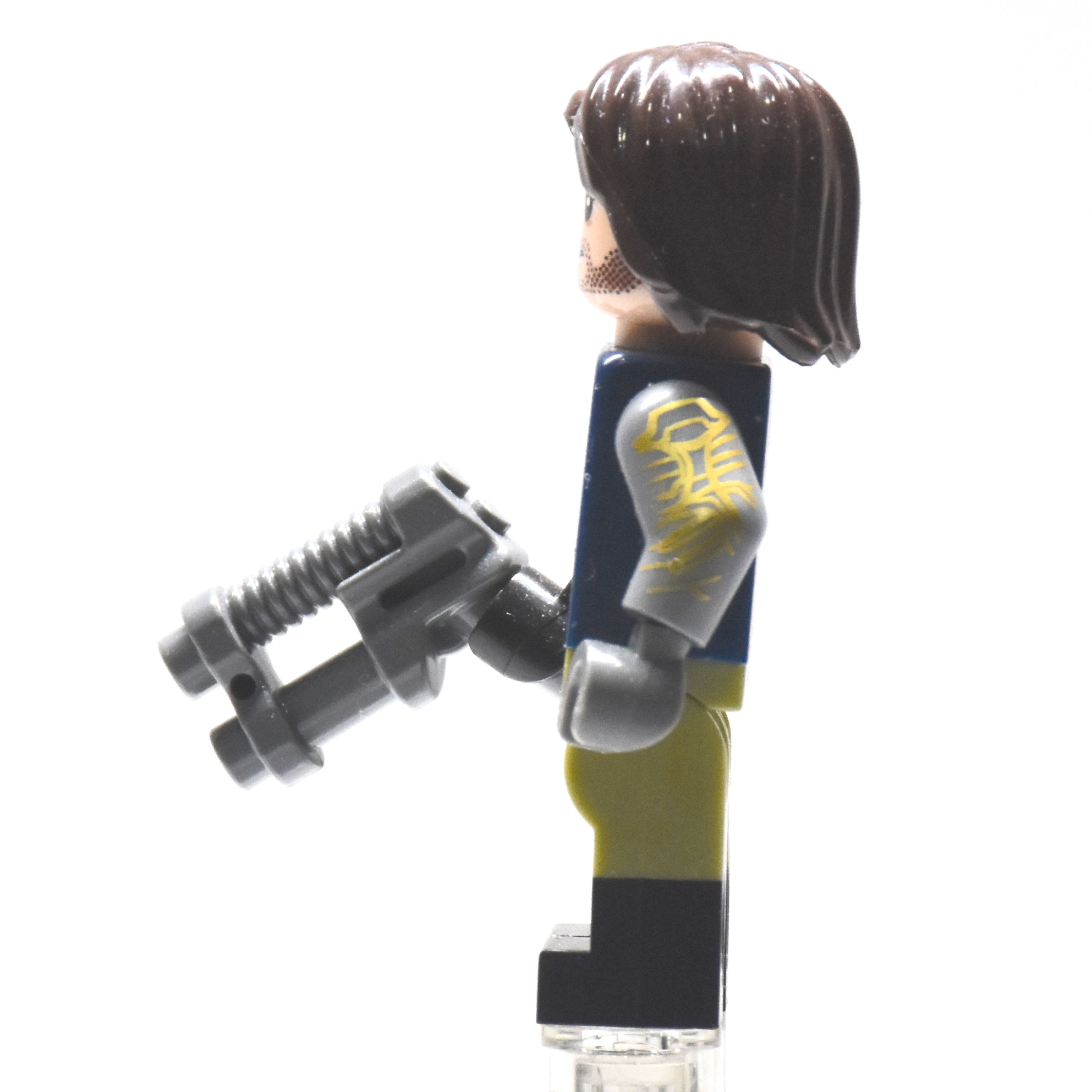 Here’s the view of the left side of the Bucky Barnes minifigure. He has a printed silver left arm which represents the new vibranium arm given to him by the Wakandans. It has accurate gold printing on it and it looks pretty good. I think gunmetal grey would have been a more accurate color but it is what it is. 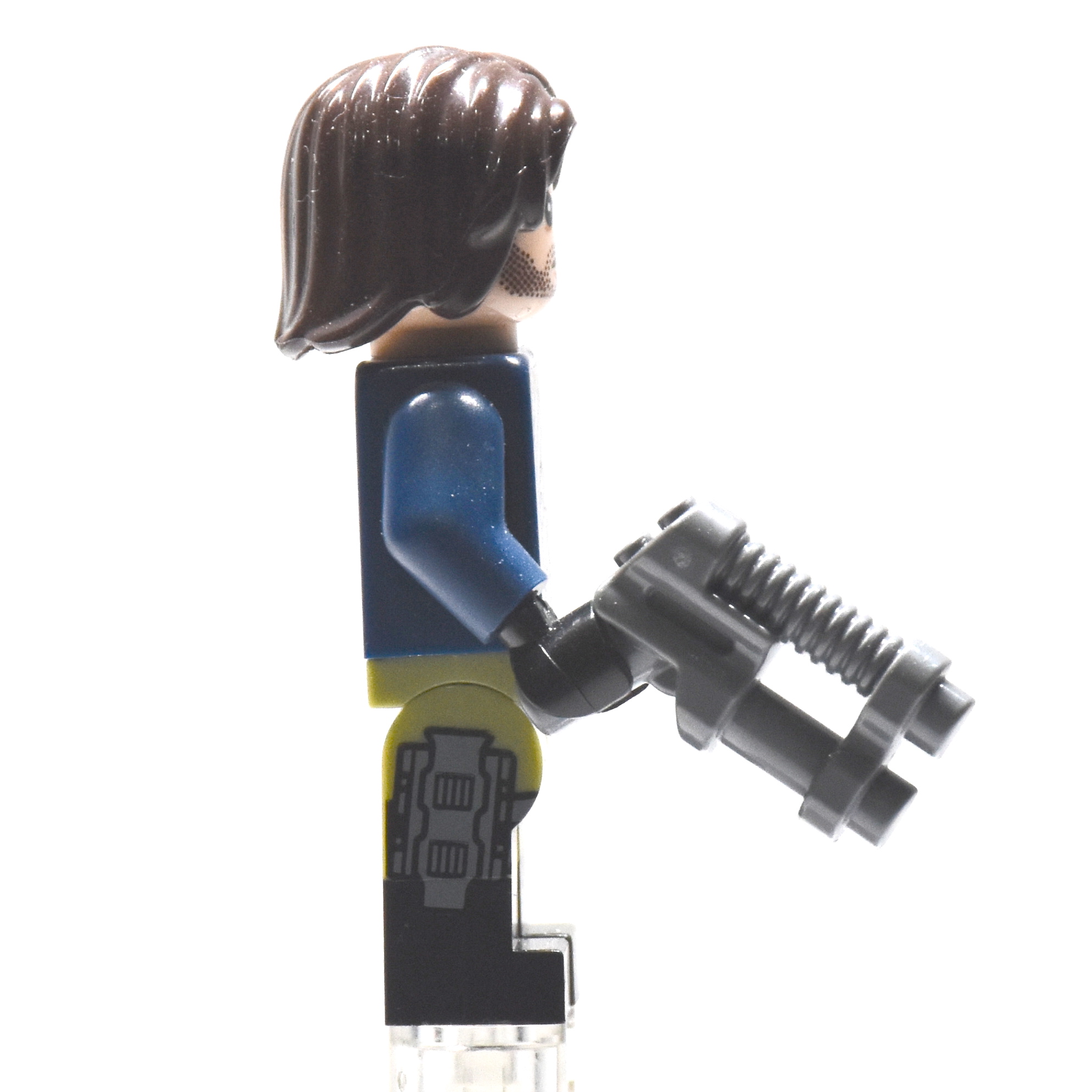 Here’s the right view of LEGO Bucky Barnes. The right side of Bucky’s right leg is printed with a gun holster design that is accurate to his movie outfit. Even though the holster is obviously too small for Bucky’s gun, I think it looks pretty great. 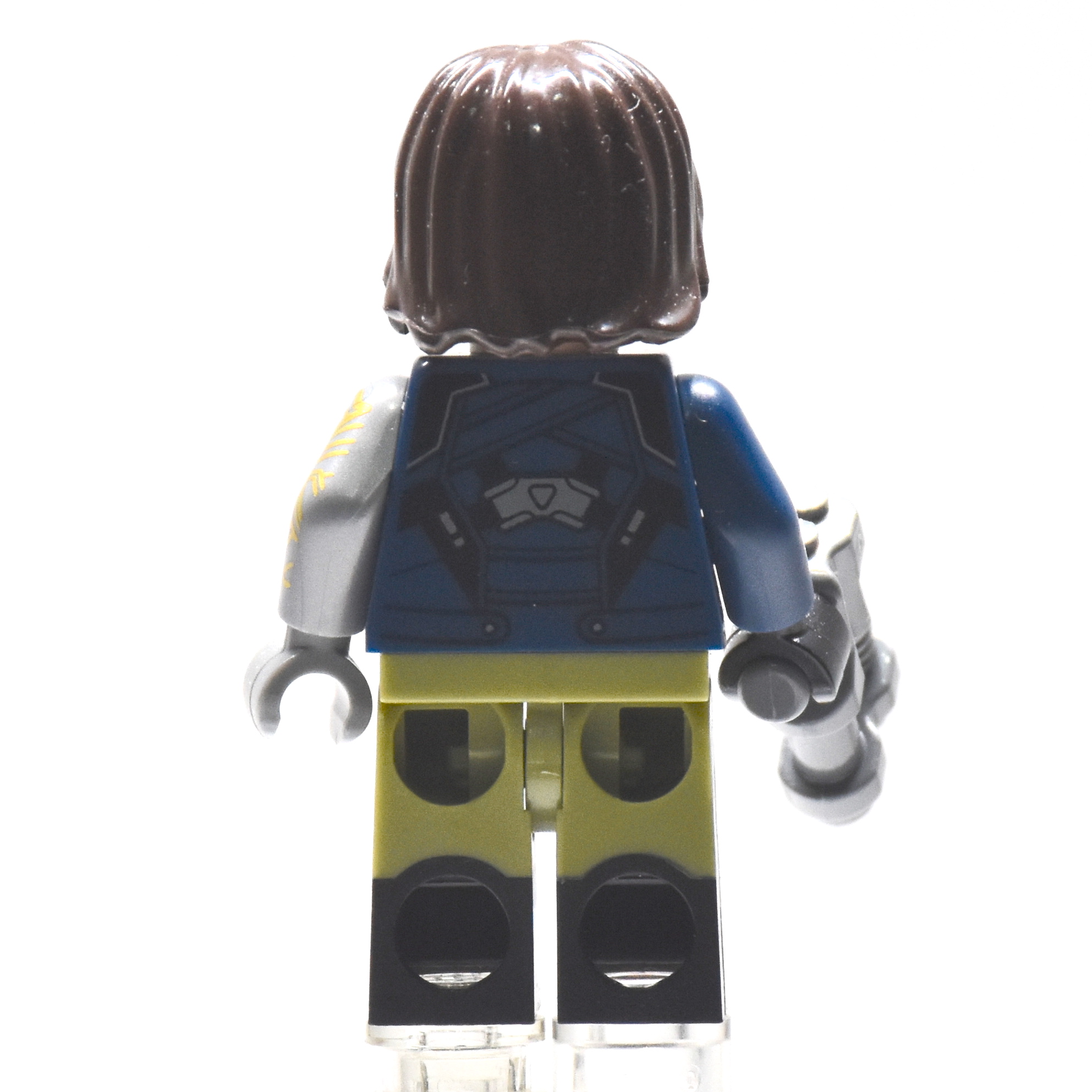 Here’s the back of Bucky’s outfit, which continues the designs from the front of his torso and looks good. 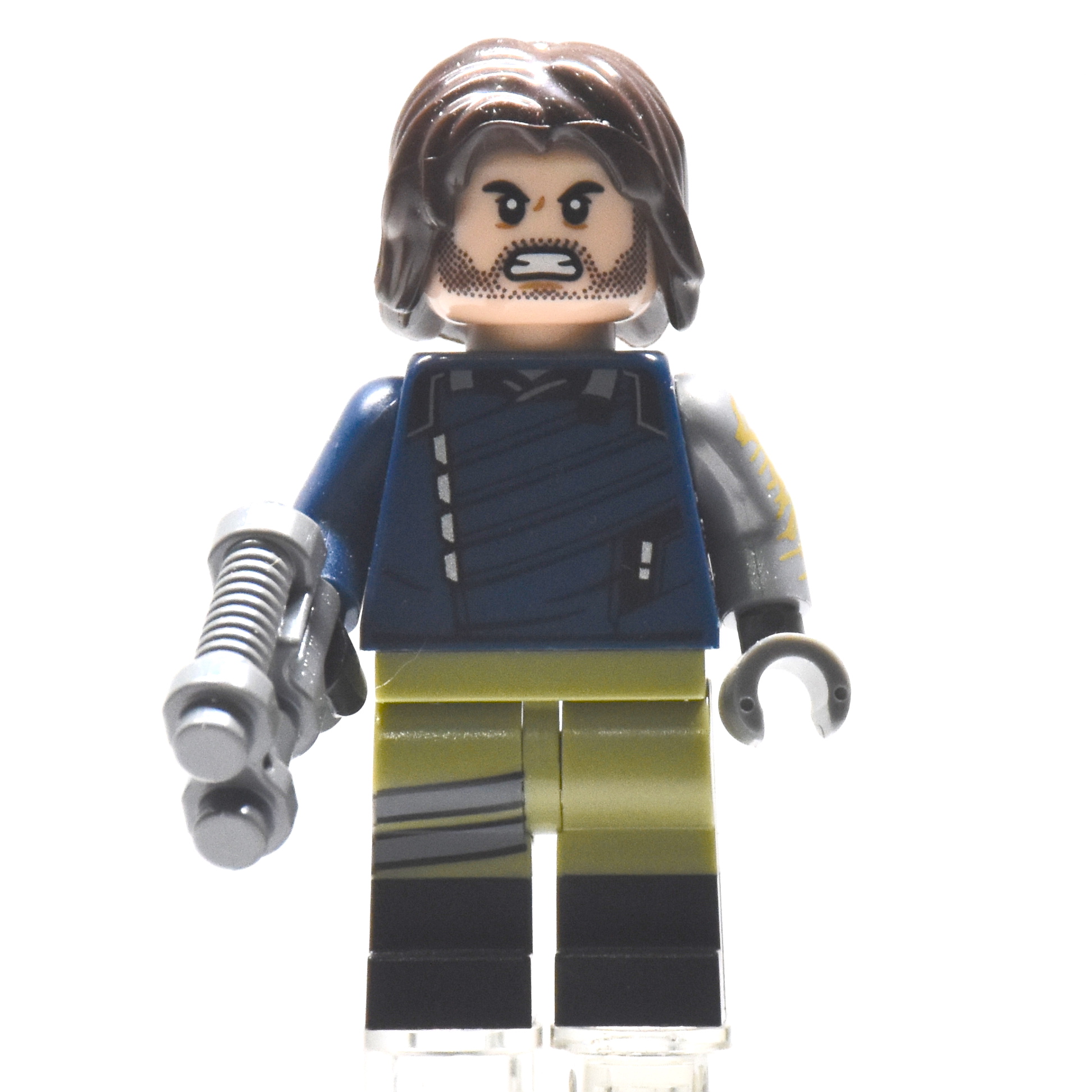 Bucky Barnes has an alternate expression, with him looking much angrier and with teeth bared. It’s awesome to get an alternate face but this still does not look like Sebastian Stan in my opinion. Bucky gets a simple dark grey double-barreled gun which isn’t really accurate but we all know LEGO hates making realistic guns. There are some flaws with the accuracy of this minifigure, but it’s still really detailed and I like it. 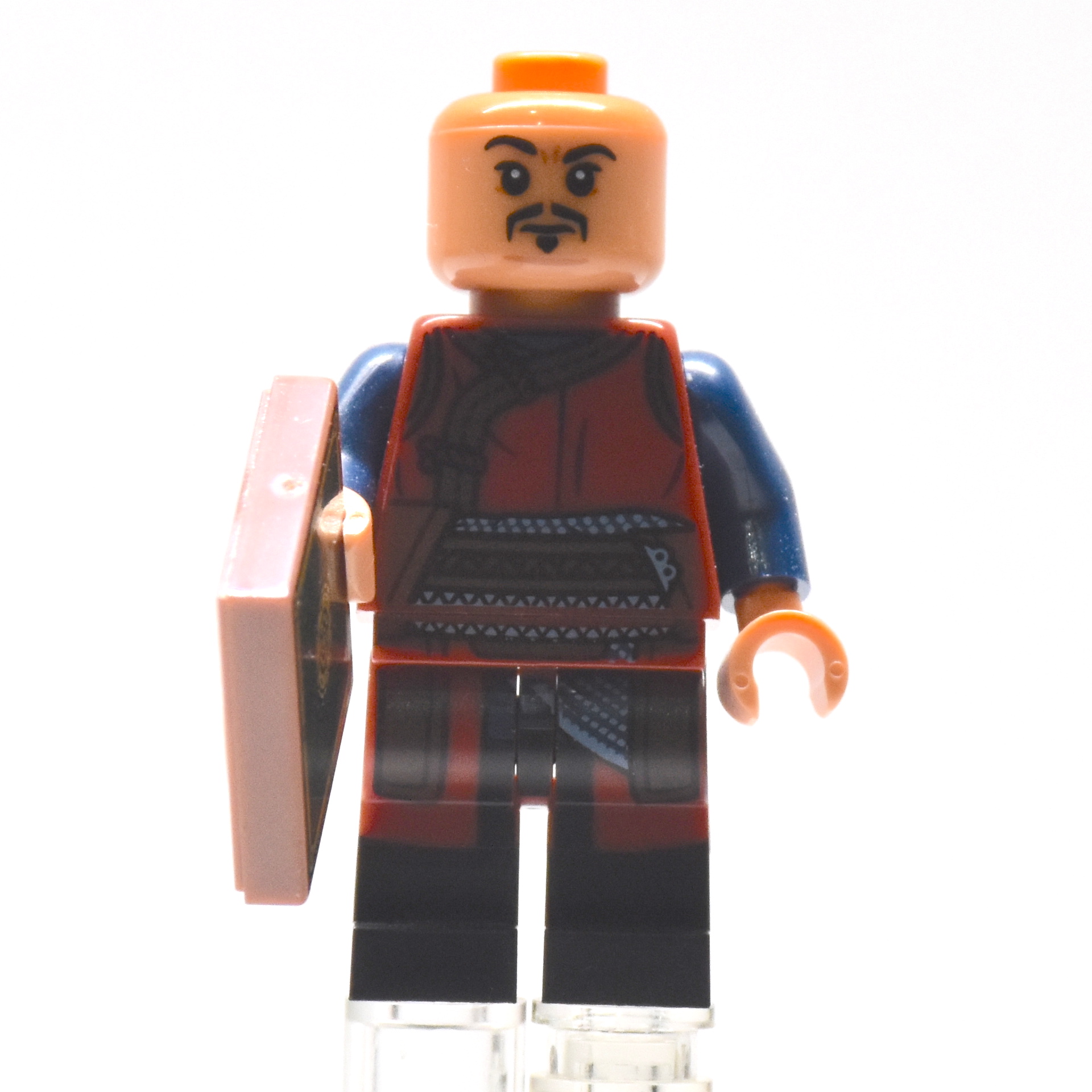 Our final minifigure is none other than Wong, companion to Sorcerer Supreme Doctor Strange. This is the first time we’ve gotten an official Wong minifigure and wow he is great, with a high level of detail. He has a darker flesh color and has a new single-sided face print. He has his robes printed onto a dark red and dark blue outfit which looks fabulous, along with dual-molded black pants. The printing of the belts, pouches, and various cloths on Wong’s torso and legs looks really good, and I’m pleased by how the prints line up. 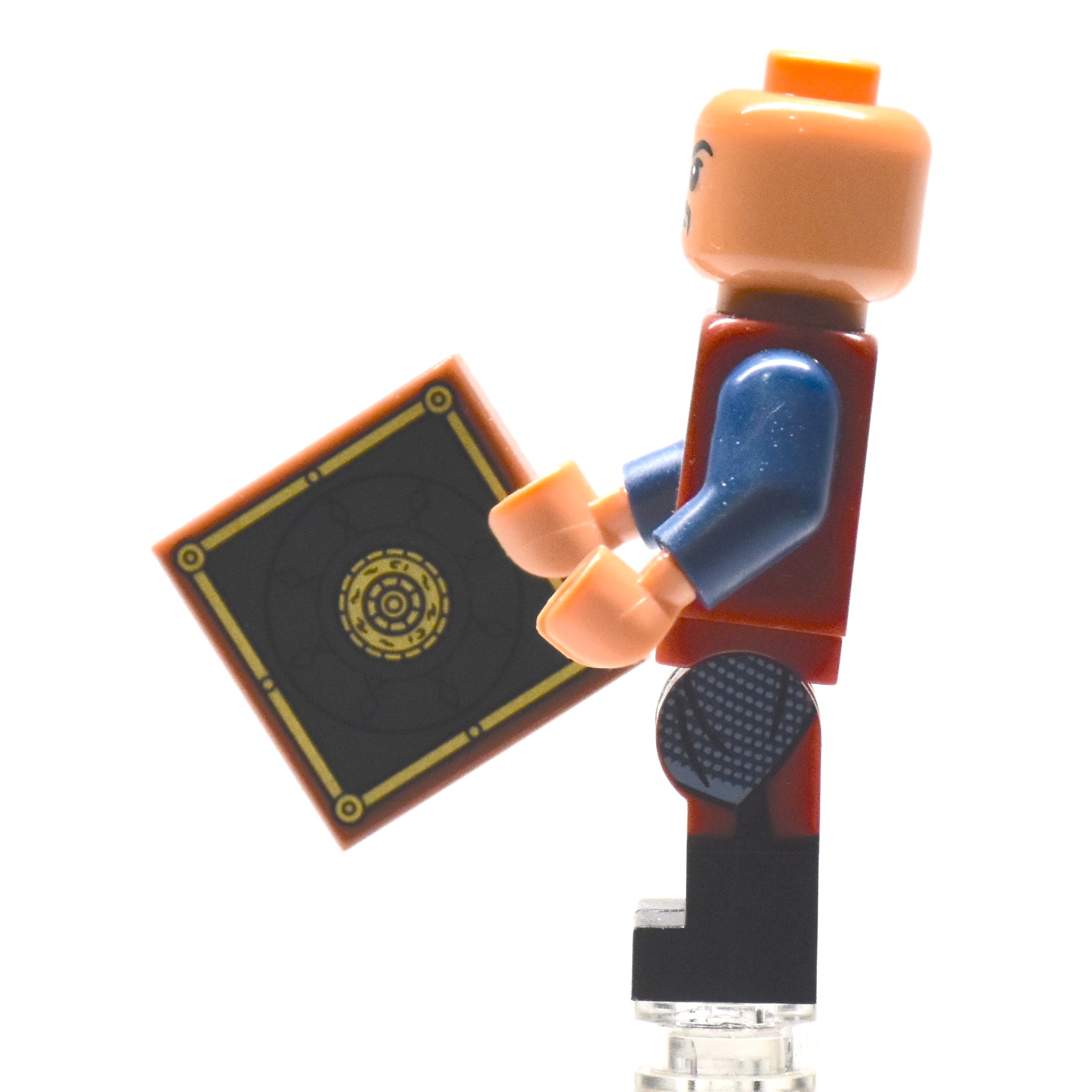 Wong comes with one accessory — an exclusive printed 2×2 tile depicting one of the books in the Sanctum. He also has side leg printing in addition to his dual-molded legs, which continues the blue cloth design seen on the front of the minifigure. 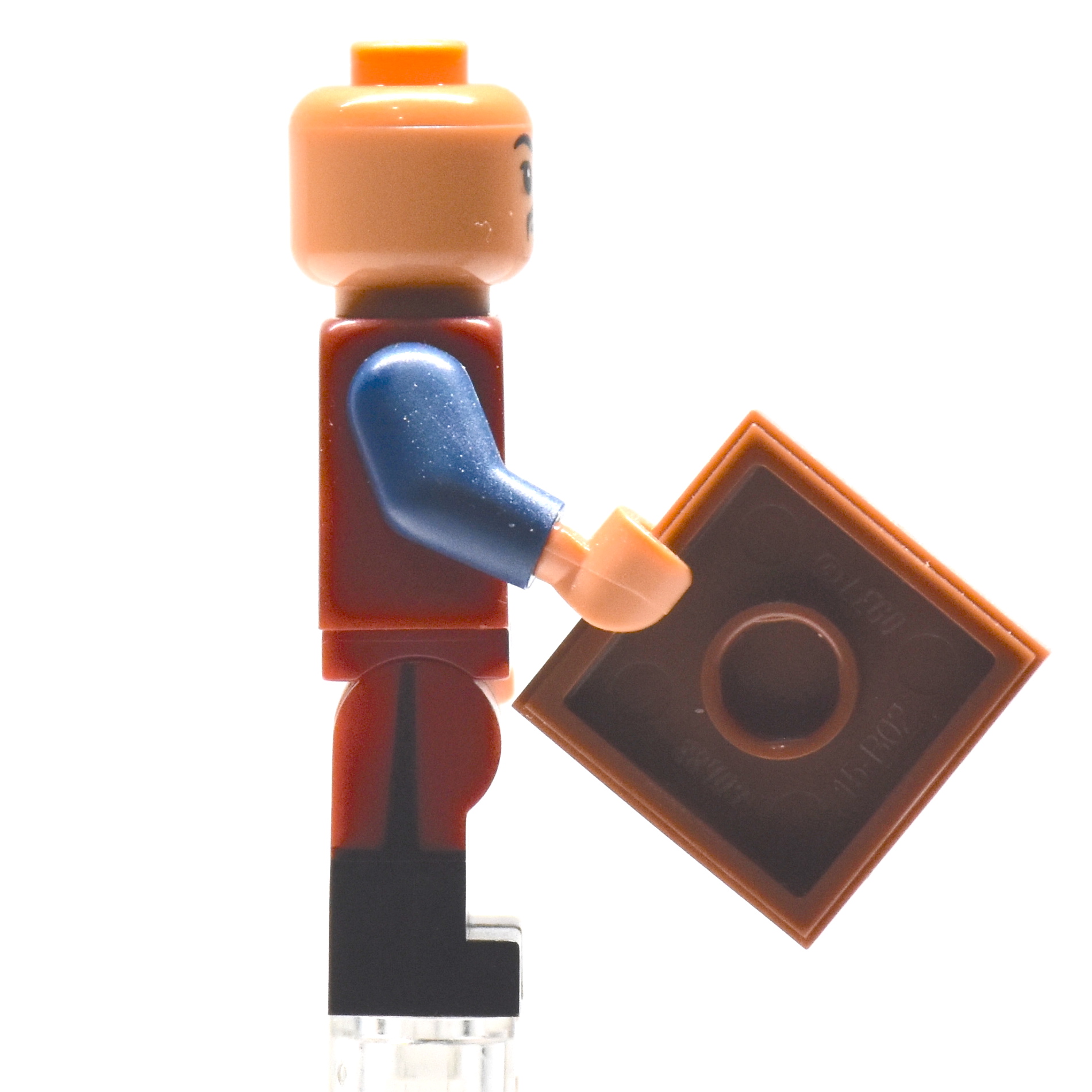 Wong’s other leg also has side leg printing and dual-molding. This side just shows a split in his robes, revealing some of the black inner robes. 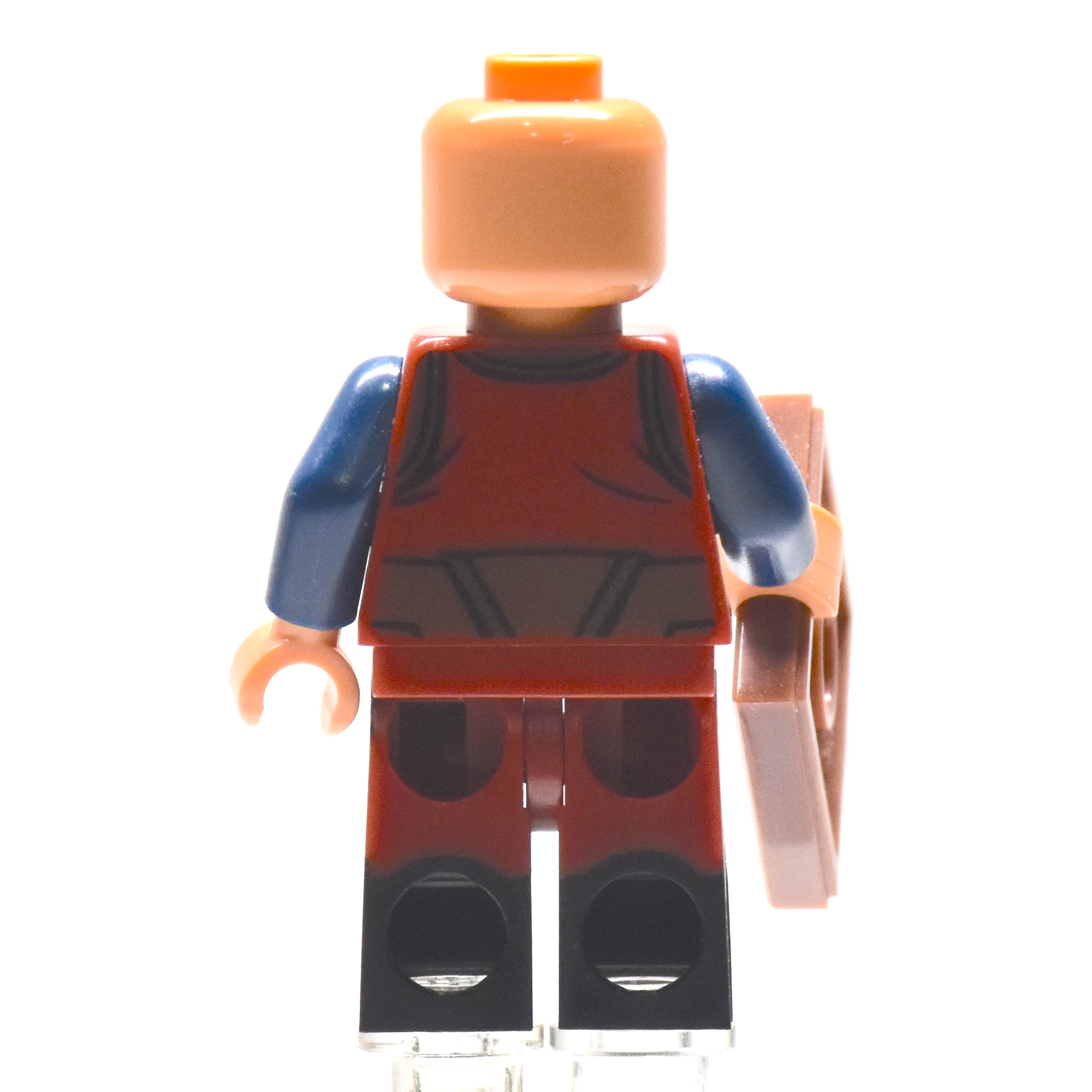 The back of the Wong minifigure has some more brown printing, and you can see the dual-molded legs from this angle. There is no printing on the back of Wong’s head. 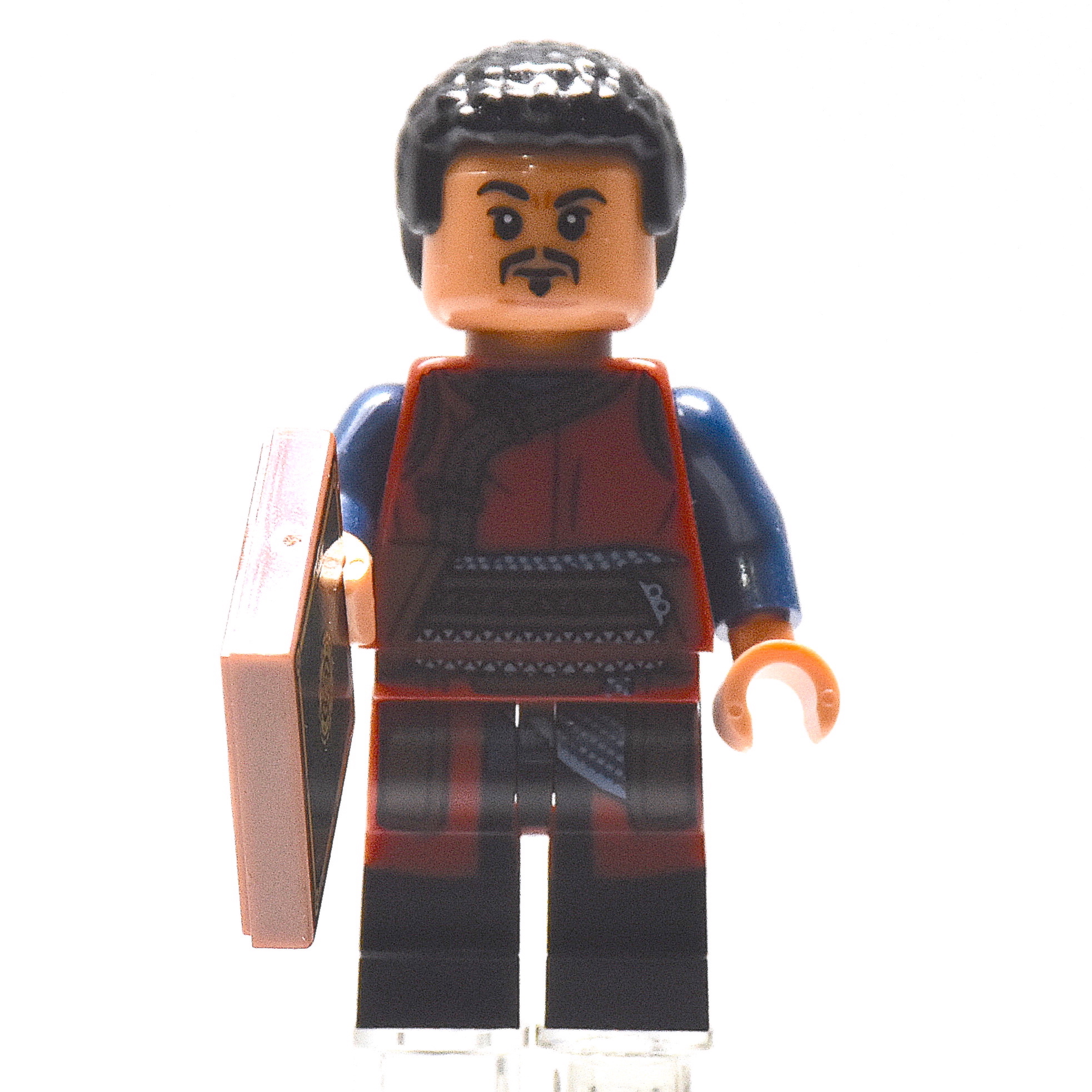 This Wong minifigure is fantastic but there’s one change I’d make to it — Wong actually has some hair in the movie and while it’s very little hair, I think his LEGO minifigure being bald doesn’t look very accurate. I gave him a black afro hairpiece (not included) that appears in sets like 76104 The Hulkbuster Smash-Up and 75176 Resistance Transport Pod. I think he looks better with this addition.

On the whole, I think this is a really great minifigure pack! All four minifigures are super detailed and they are all pretty relevant to Avengers Infinity War. (Wong and Bucky also appear in these exact outfits in Avengers Endgame.) The minifigures themselves do have flaws but these are mostly minor, and I am really satisfied with the pack as a whole.

However, there’s one thing I have to point out. I have never gotten a Bricktober pack before so this came as a bit of a disappointment to me when I got it — these minifigures are so detailed because they are likely made in China, and thus the minifigure joints and connections are pretty loose. The legs and arms aren’t as tight as regular LEGO minifigures, and the clutch power of the headgear and hairpieces aren’t perfect.

Nonetheless, I am still happy with this LEGO Avengers Infinity War Bricktober Pack. It’s kind of hard to rate, but if I have to, I’d give it a 5/5. It’s not perfect, but it’s basically all that you could ask for, and I do wish more people were able to get their hands on these four wonderful minifigures.

Thank you very much for reading! Leave your thoughts in the comments below, and do share this article if you enjoyed it.