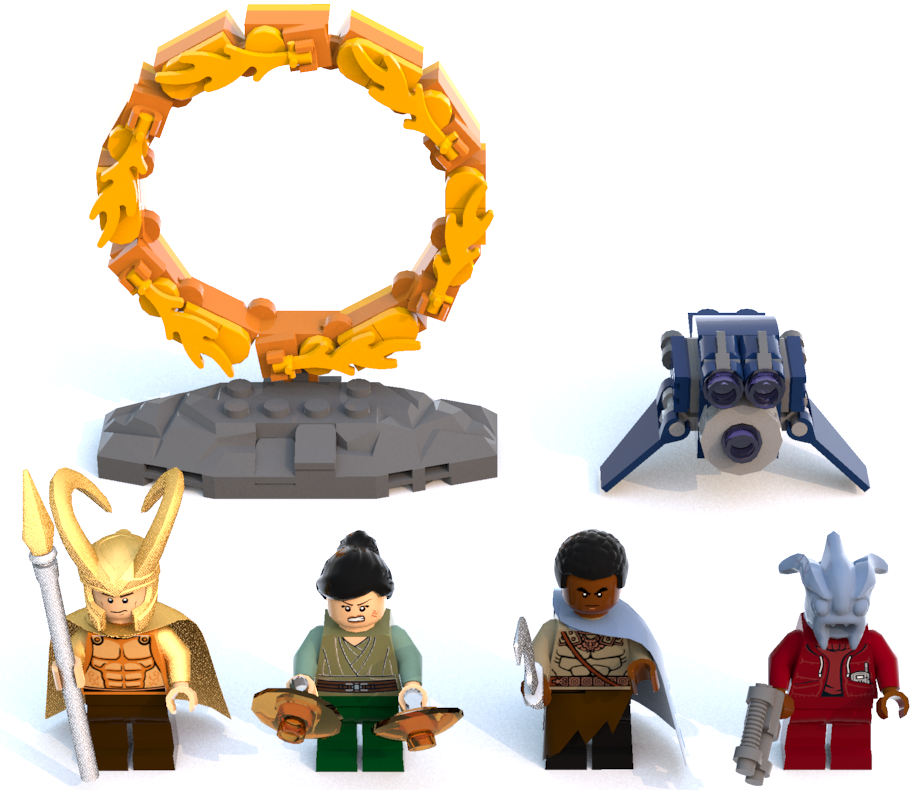 I designed this set as basically an army builder battle pack, something that has been pretty absent from LEGO sets lately. In the final battle of Avengers Endgame, many portals were opened and the Wakandan, Asgardian, Ravager and Sorcerer armies marched out to defeat the hordes of Thanos’ minions. Accordingly, this set includes one minifigure from each army, allowing you to collect multiples and build your own armies. There are also two small side builds included, as is customary with many LEGO battle packs. 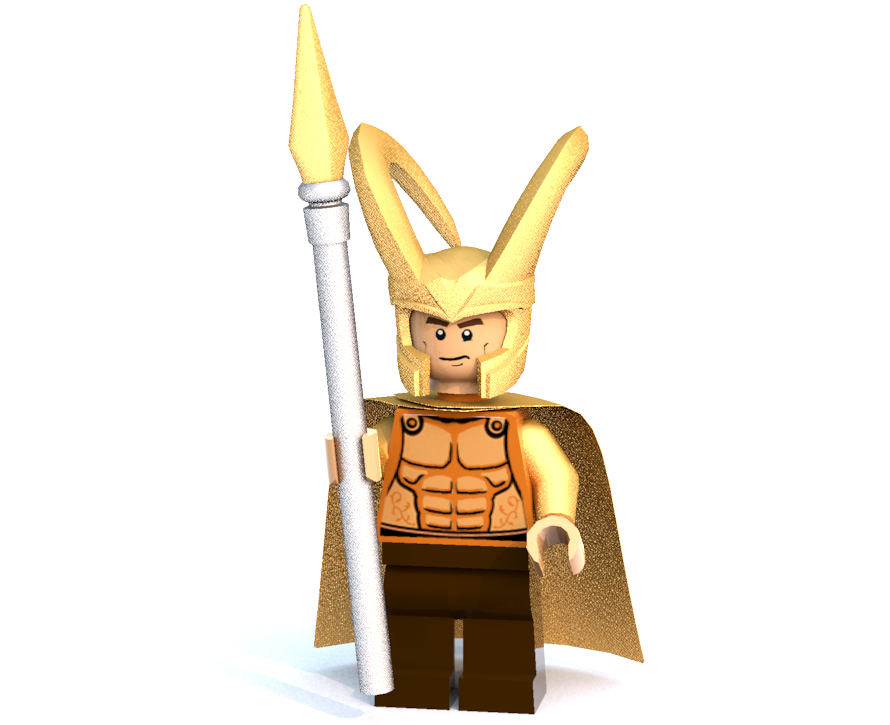 The first minifigure is a soldier from Asgard. This minifigure is decked out in his full Asgardian gear and has been teleported from New Asgard. I used Loki’s helmet piece for this minifigure as the Asgardian armor’s helmet features two prominent horns. This Asgardian warrior has a golden cape, orange and gold chest armor, and brown pants. He has a stern expression and a long silver spear with a golden tip. 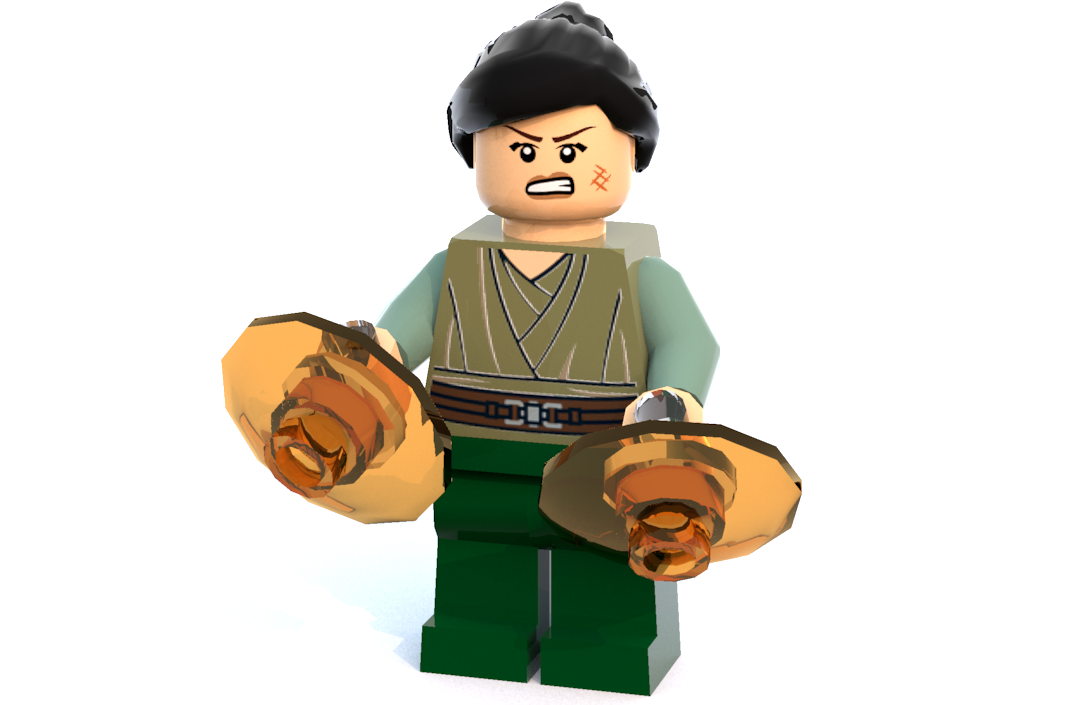 The second minifigure in this custom LEGO Avengers Endgame set is a sorcerer. Wong led an army of sorcerers into battle during the final act of Endgame and despite their lower troop numbers, the sorcerers played an important role in the battle by shielding many of the protagonists from Thanos’ missile fire. This minifigure depicts a female Asian sorcerer, and she has a determined expression along with a black ponytail hairpiece. She wears green robes made from three different green colors – olive green, sand green, and dark green. She comes with two translucent orange radar dishes to represent her magic powers (similar to those used by Dr. Strange and Wong). 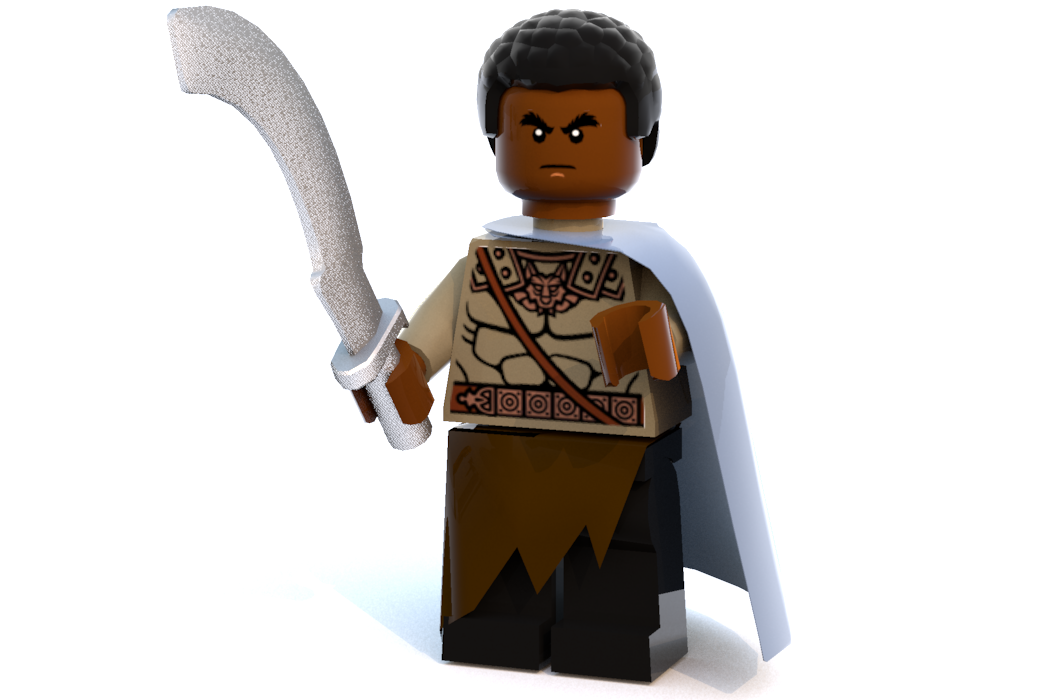 The third minifigure is a Wakandan soldier. This minifigure is based off the Wakandan warrior design seen in Infinity War and Avengers Endgame, and it has relatively earthy color tones. This minifigure has short hair and a stern expression. His sand blue cape is worn over one shoulder and is intended to represent the energy shields deployed at the Battle of Wakanda. This soldier has a dark tan torso outfit, a cloth skirt at the waist, and unprinted black legs. His accessory is an Egyptian sword molded in silver and wielded backwards to represent a Mambele sword. 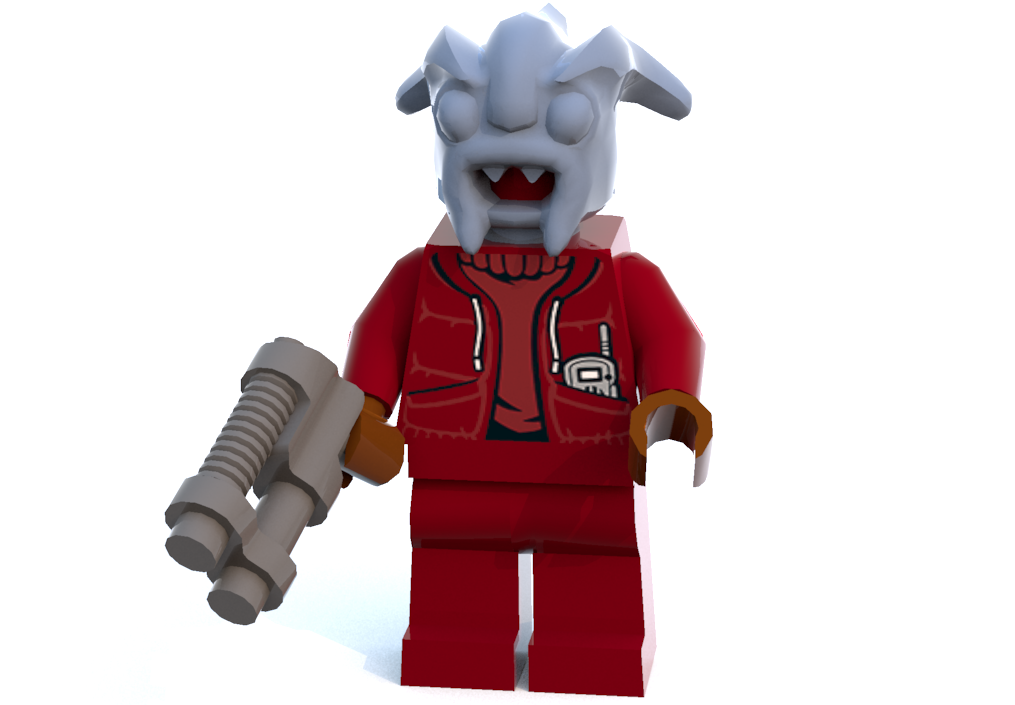 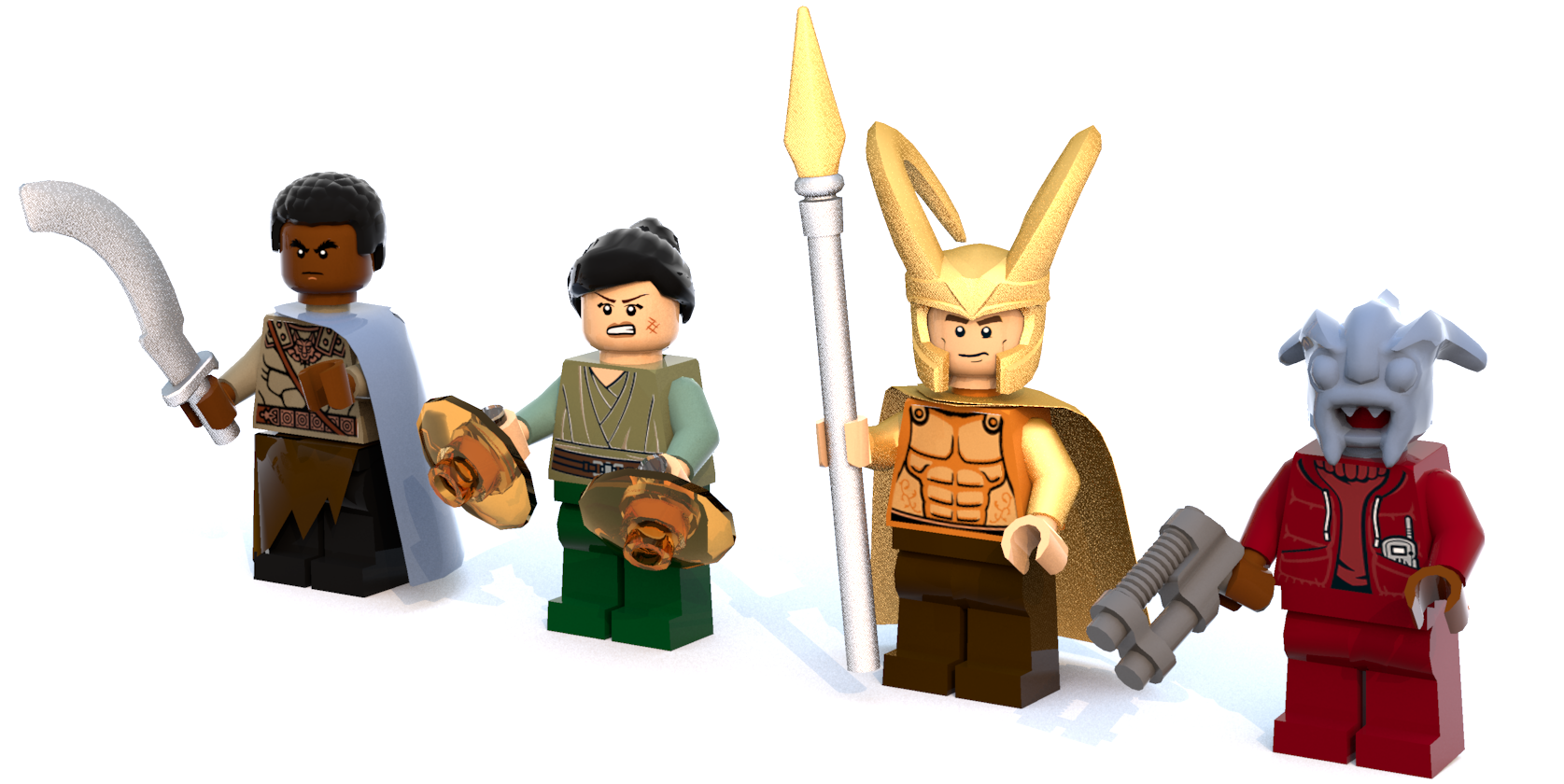 In conclusion, I purposely included one minifigure from each army in order to help this set’s massability. The idea is that LEGO fans would be able to collect multiples of this set and build their own army for the final climax of Avengers Endgame. 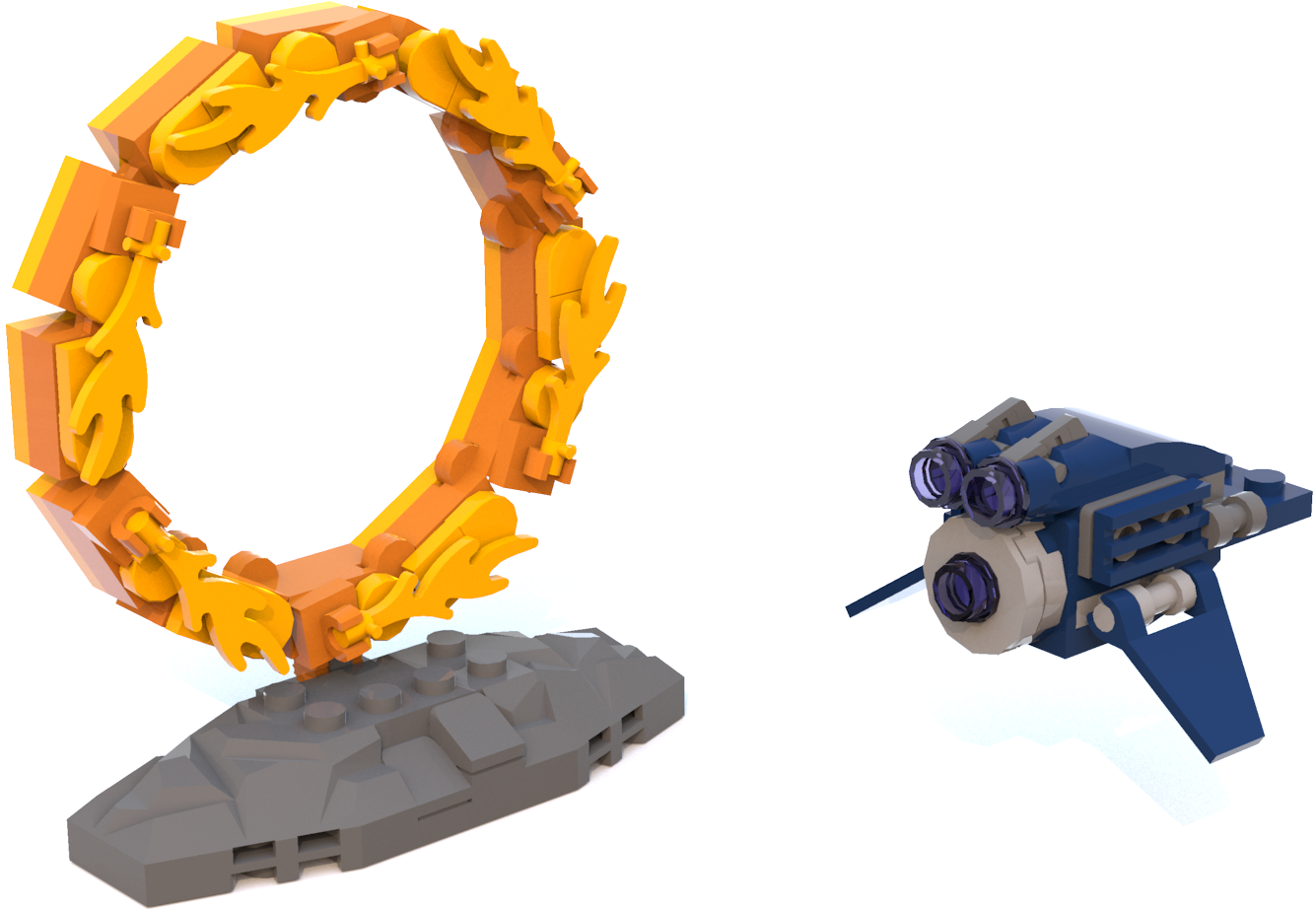 Now on to the builds of the set, of which there are two. There is a space speeder bike for the Ravager along with a portal. 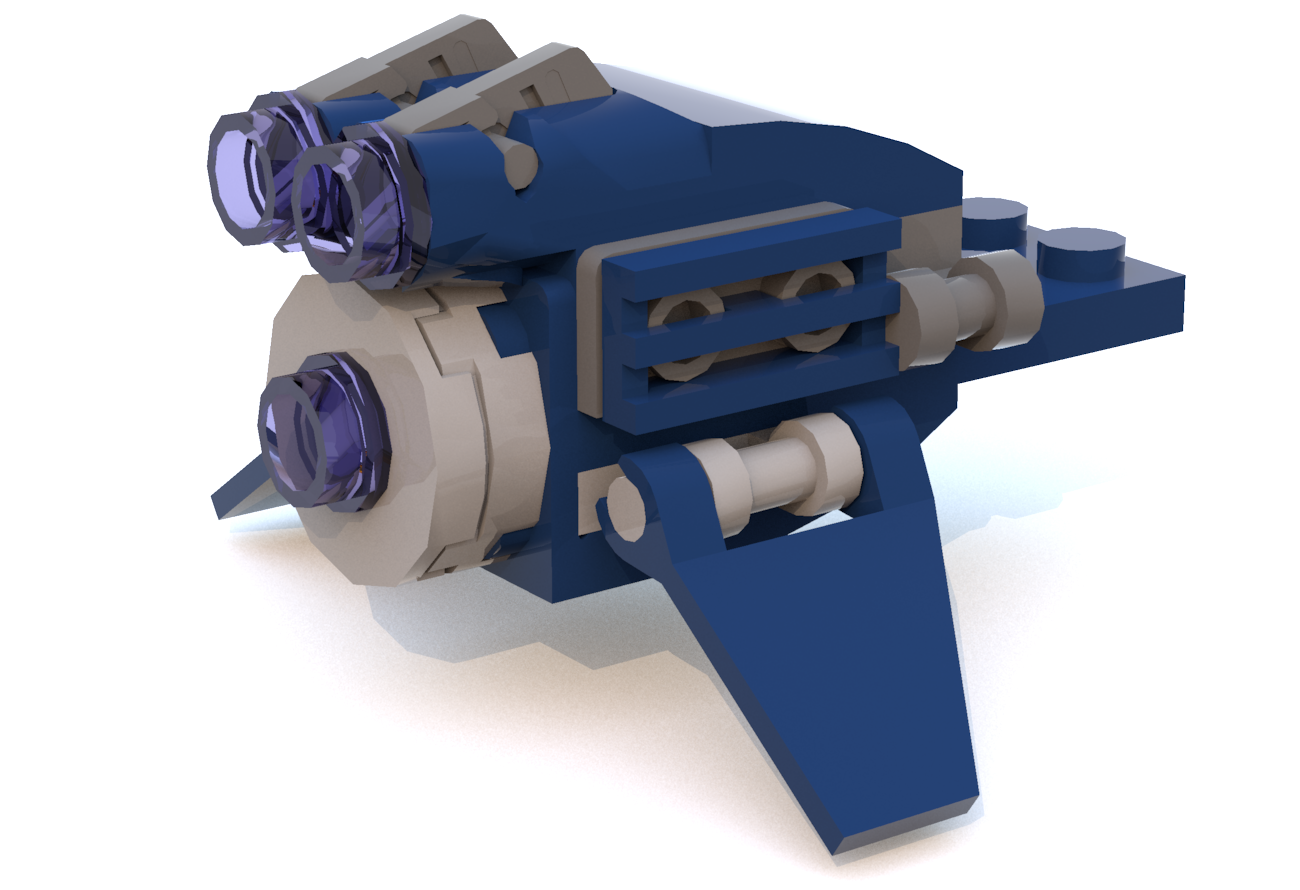 The swoop bike is the smaller of the two builds, but is compact and functional. It has a dark blue color scheme with a large round central engine, and is based on the in-universe design that can be seen in the background of some shots. 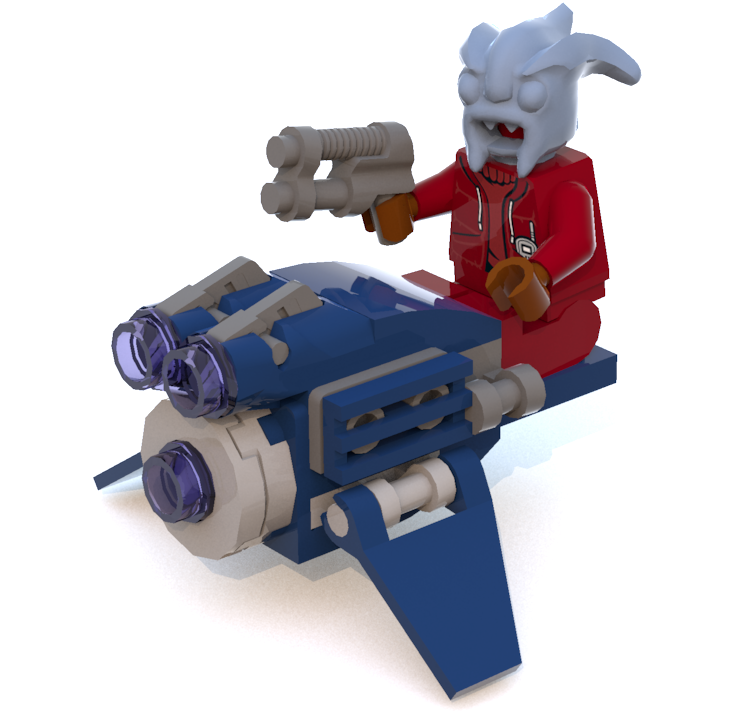 There is a 2×2-sized area at the back and you can seat the Ravager there. This may be a one-seater craft but it allows the Ravager to fly into battle to defend his allies. 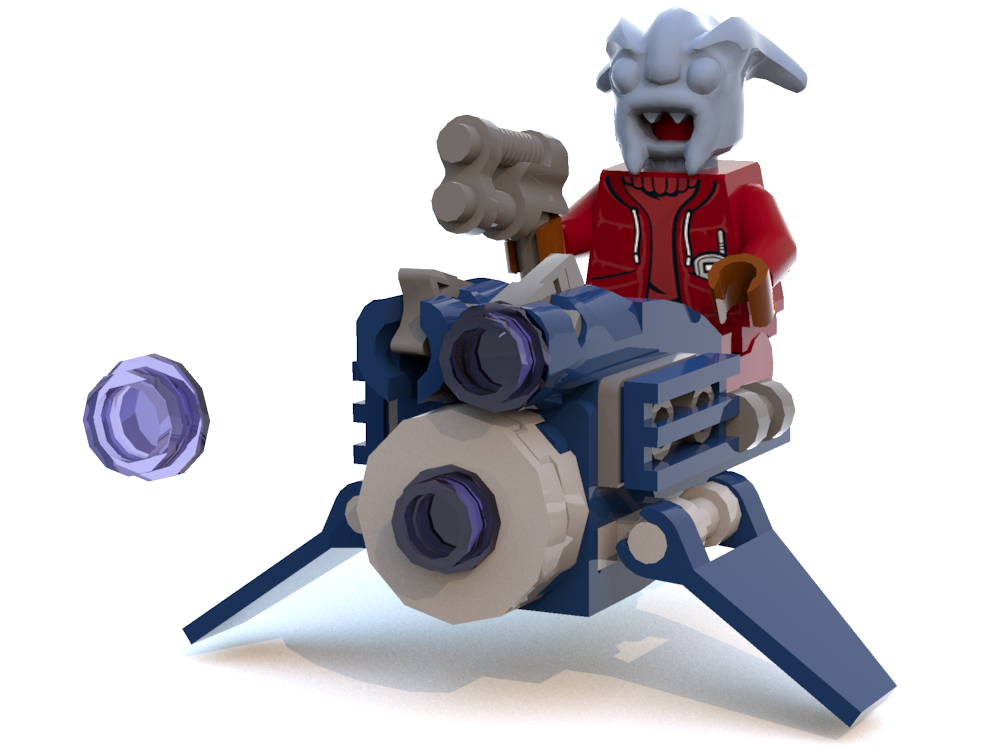 What would a LEGO set be without play features? The swoop bike includes a pair of stud shooters at the front, just above the round grey engine. These stud shooters fire off translucent purple studs, raining down firepower on the Ravager’s enemies. 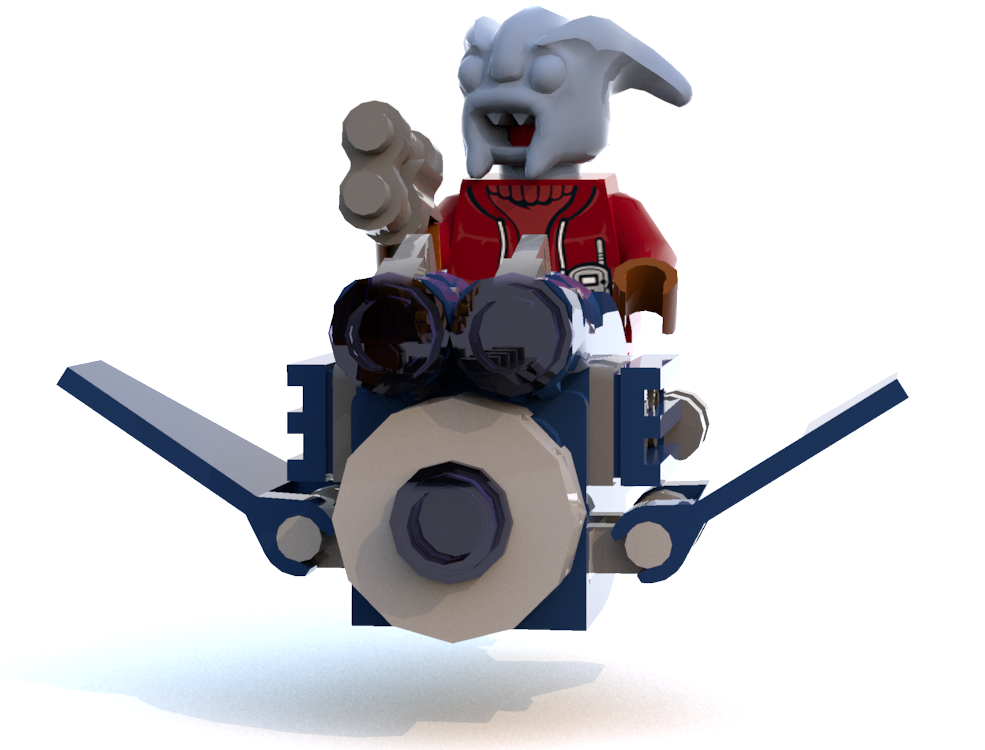 The swoop bike has a pair of small wings on either side to add some character and style to the craft. These can be hinged up and down to help with poseability and landing. 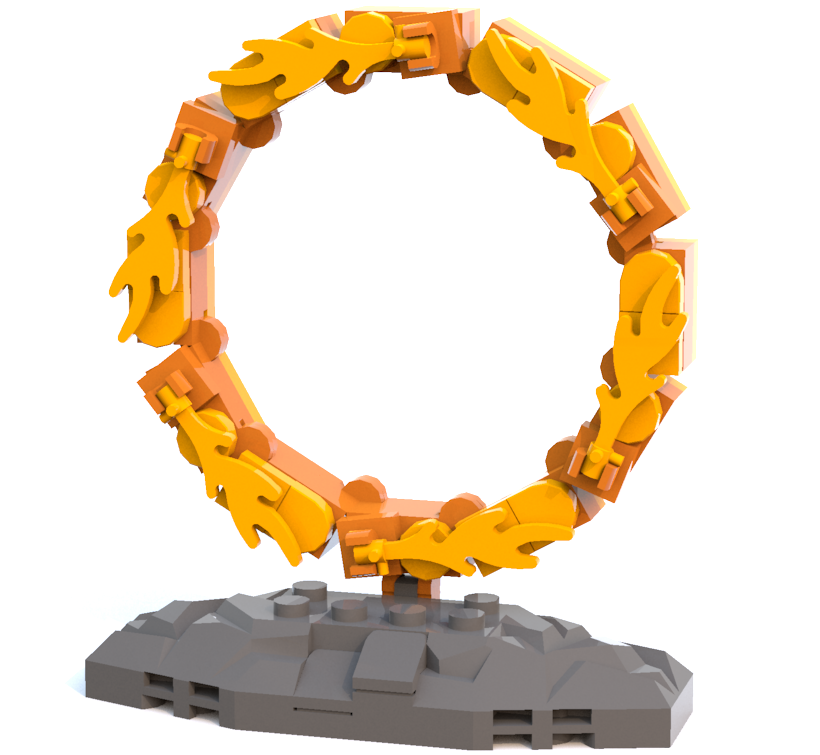 The larger, more piece-heavy build in the set is the portal. During the Battle of Earth, reinforcements arrived to aid Captain America via portals opened by Wong and Dr Strange. I have accordingly included a portal build here, and if you end up collecting multiples of this “set” then you can piece together multiple portals to recreate the Portals scene in Avengers Endgame. 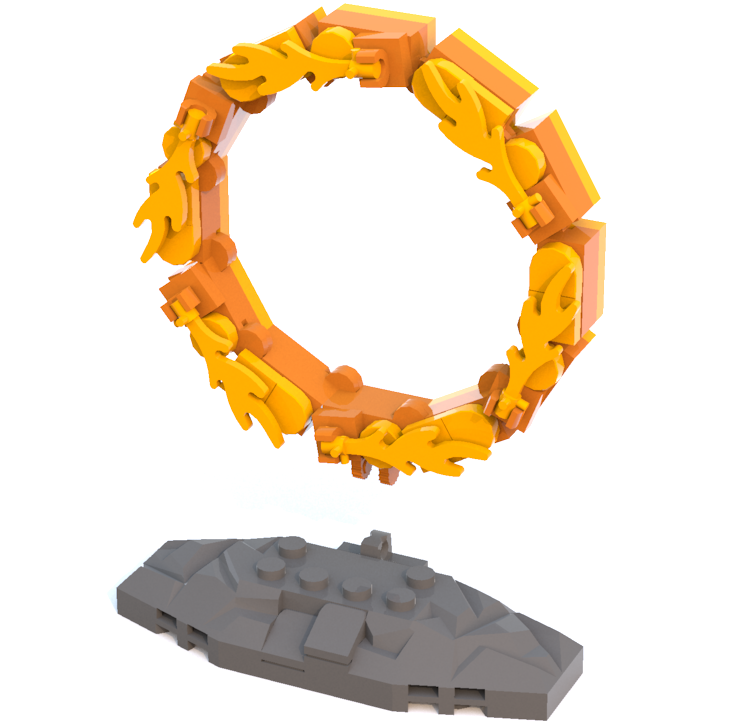 The LEGO portal features flame pieces all around to achieve an authentic fiery design. There is a small bit of rock/rubble and the portal attaches to it via a click hinge. This allows it to be removed, or you can attach it to make the portal appear. 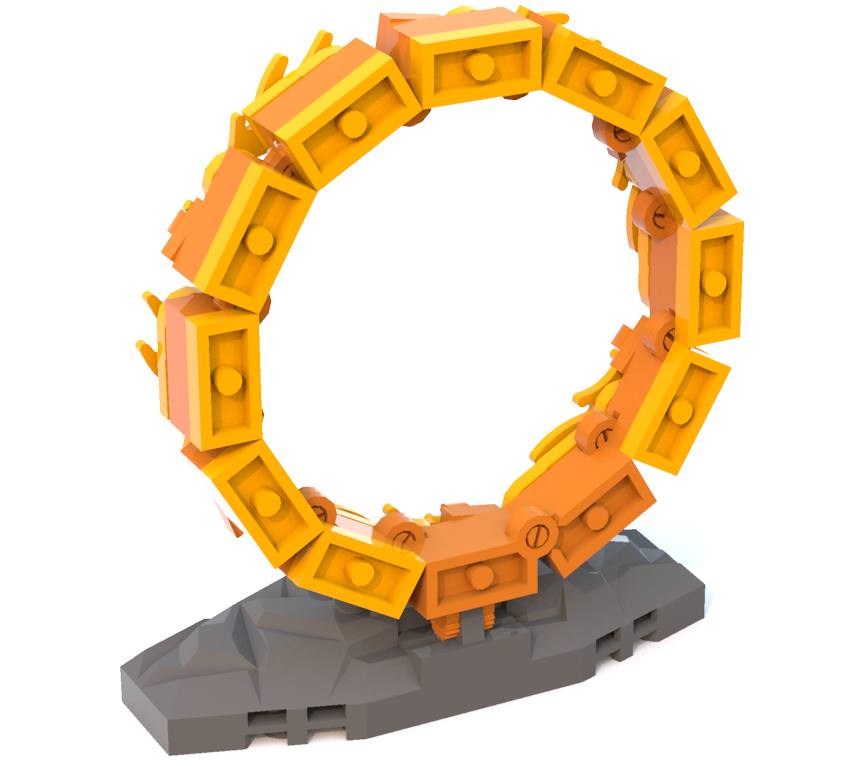 Here’s a look at the back of the portal. This side shows that it is built from LEGO hinge pieces which helps it to gain an accurate round shape. 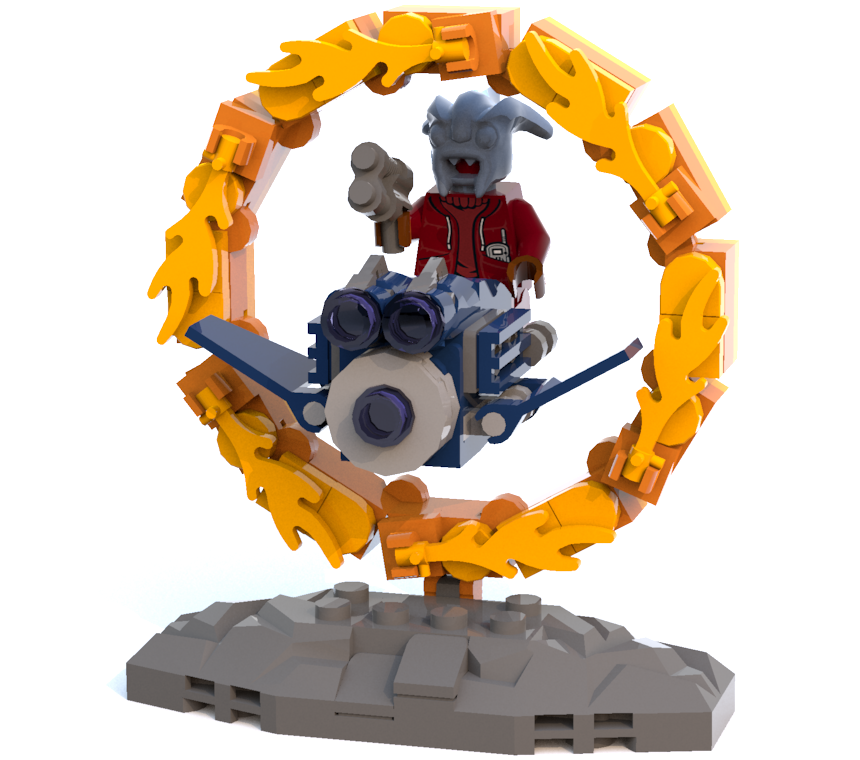 The best part about the portal? There is actually enough space to let the swoop bike fly through! (Though its wings need to be folded up.) Of course, you can also let your other minifigures walk through. 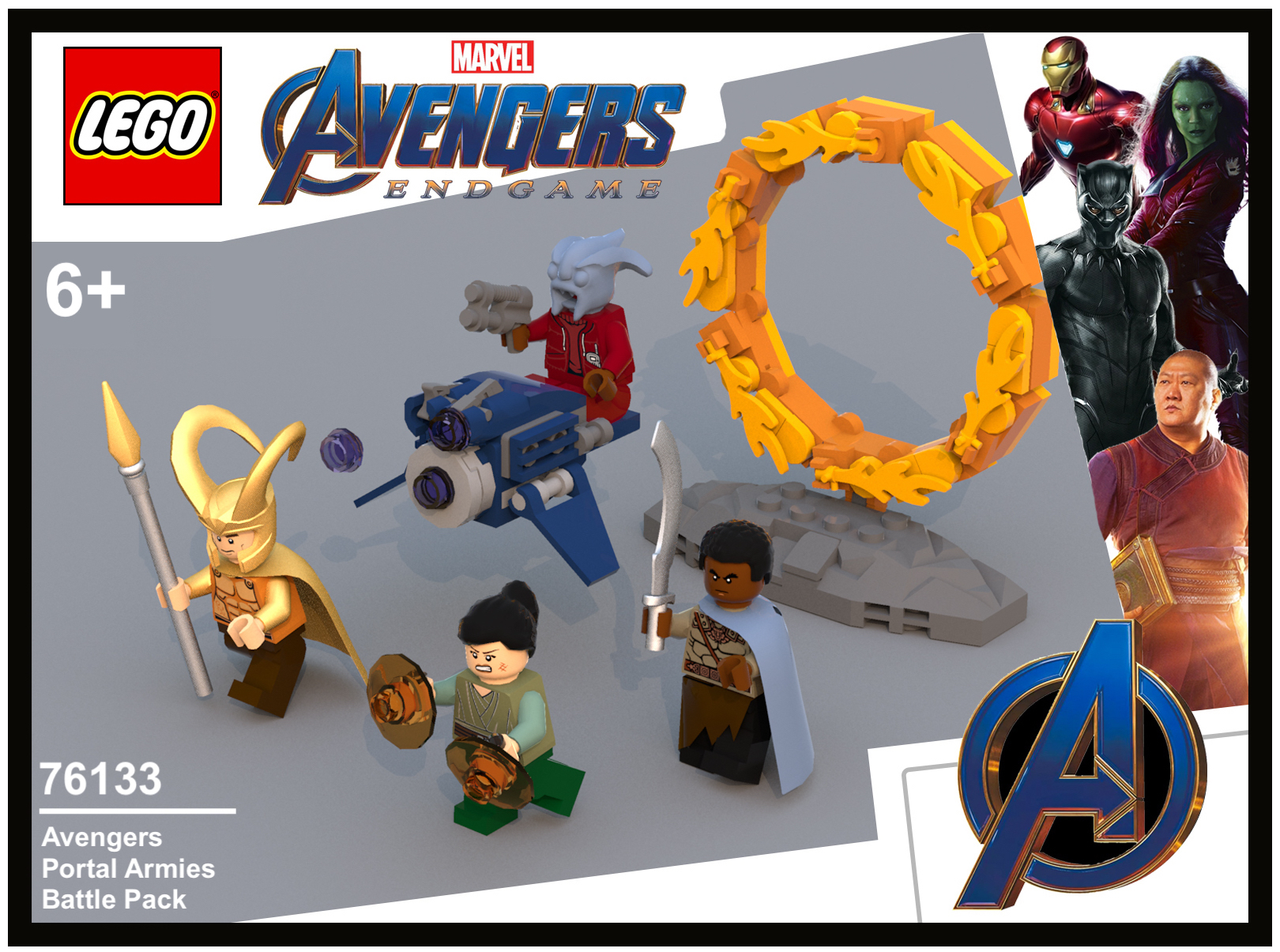 On the whole, I created this custom LEGO Avengers Endgame set as the second in my ongoing MOC series. This fills the role of a battle pack, providing four varied troop types that can charge into battle against Thanos’ army. Furthermore, the minifigures and builds have been designed to be easily massable, allowing you to (hypothetically) buy multiples of the set and build a giant portal army to recreate the final scene of Avengers Endgame!

Once again, please note this is fanmade by me and is not an actual set.

Thank you very much for reading! Let me know your thoughts on this set in the comments below! Also feel free to provide any suggestions for upcoming sets you’d like to see, and I’ll definitely consider them!