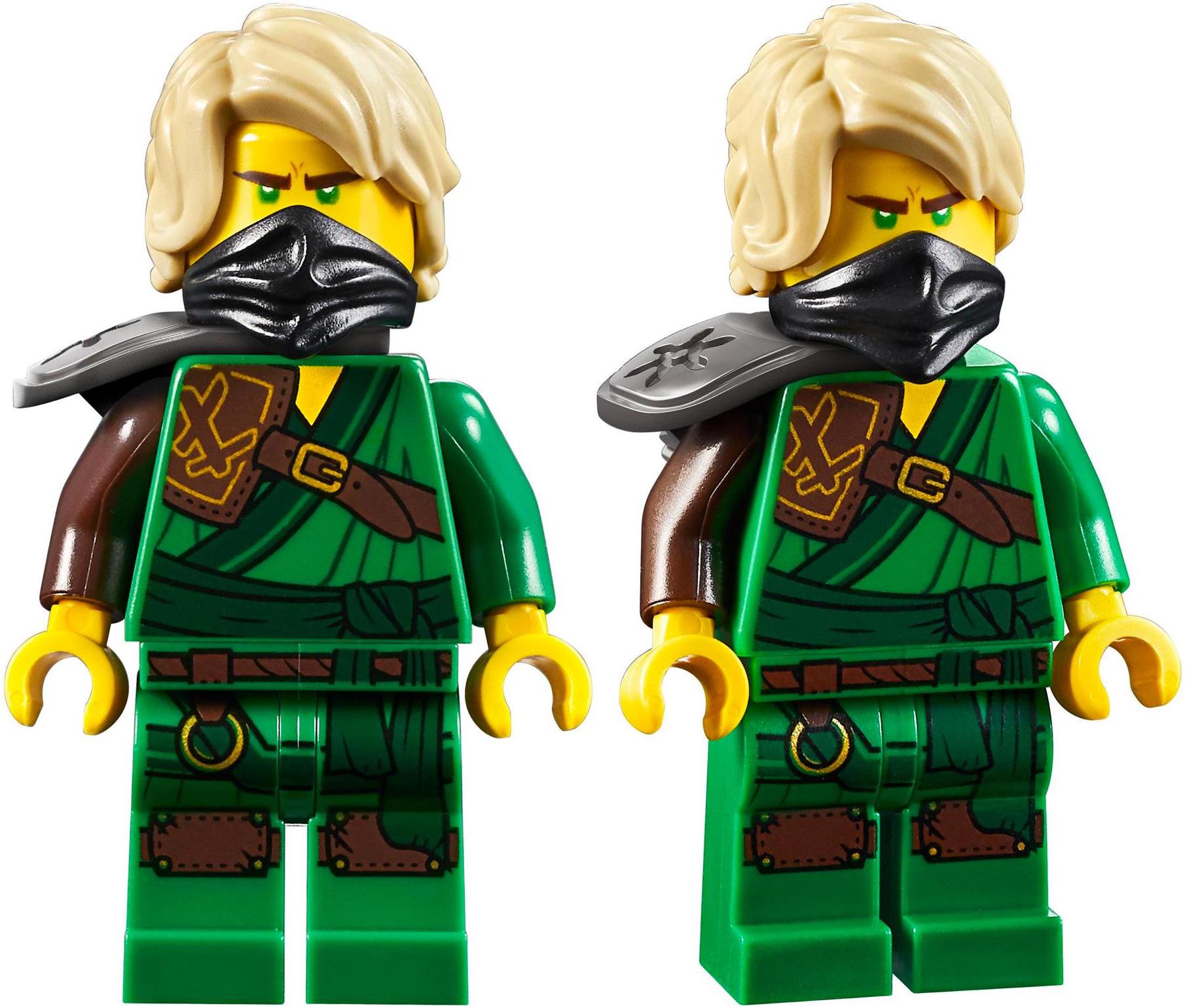 The first minifigure in the set is Lloyd Garmadon, the Green Ninja. He wears his new outfit from the latest season of Ninjago, which features bright green as its primary base color. He has his blonde hairpiece introduced in 2017, along with the same double-sided head (smiling and angry) that we’ve been getting for a while. He has a bandana which covers his mouth, but oddly enough it is black which I feel clashes a bit with the rest of the color scheme. Lloyd has a new gunmetal grey neck accessory that can fit one katana at the back, and also has a snowflake emblem molded onto the shoulderpad. His suit is printed with simple robe and belt details, and his right sleeve is brown in color. 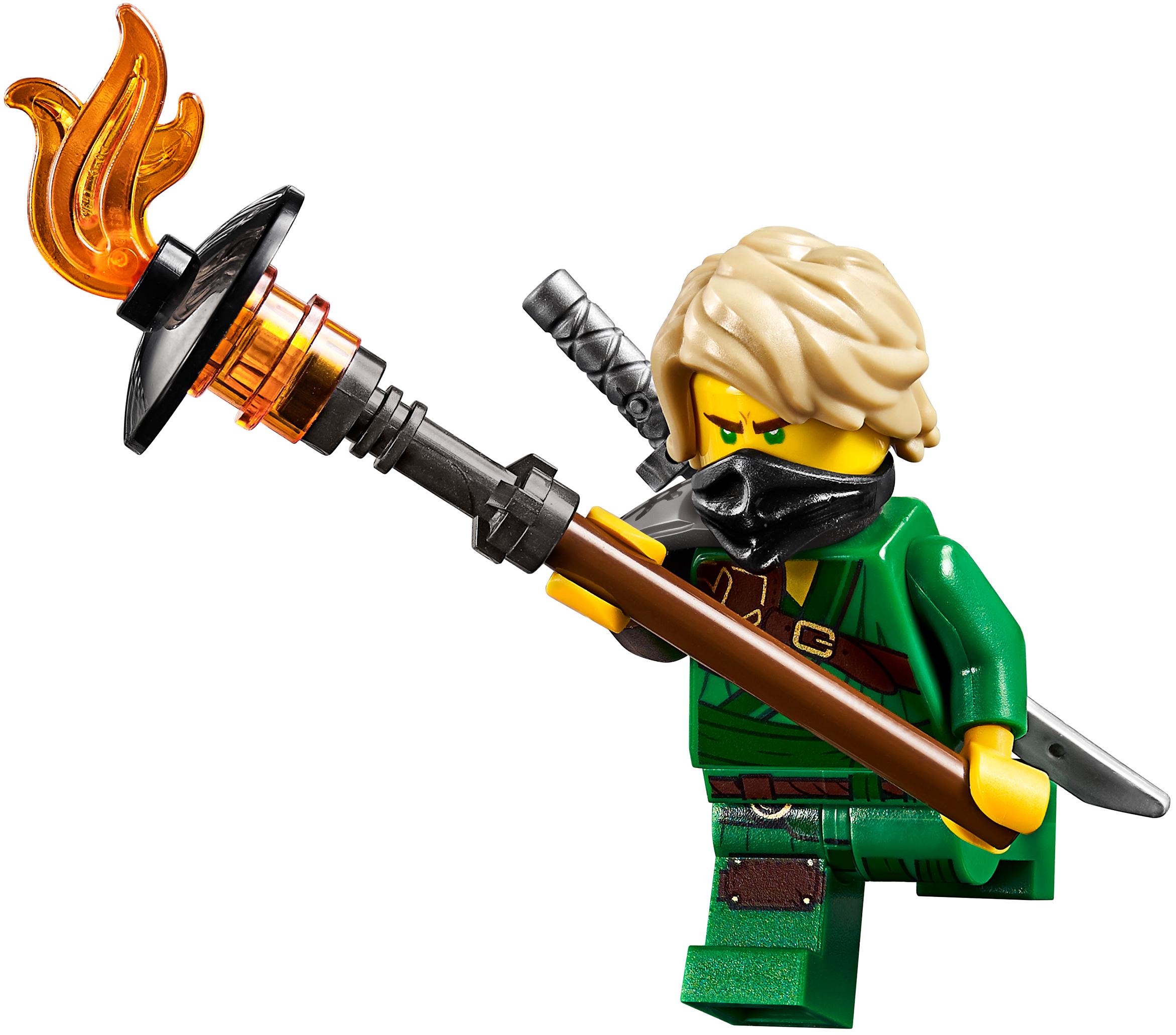 Lloyd comes with a silver katana that is inserted into his neck-mounted weapons holder. He also comes with a large torch accessory that is brick-built. It has black, brown and gunmetal grey details, along with translucent orange segments with a flame piece at the top. This torch will no doubt prove handy in the icy climate that Lloyd seems to be in! 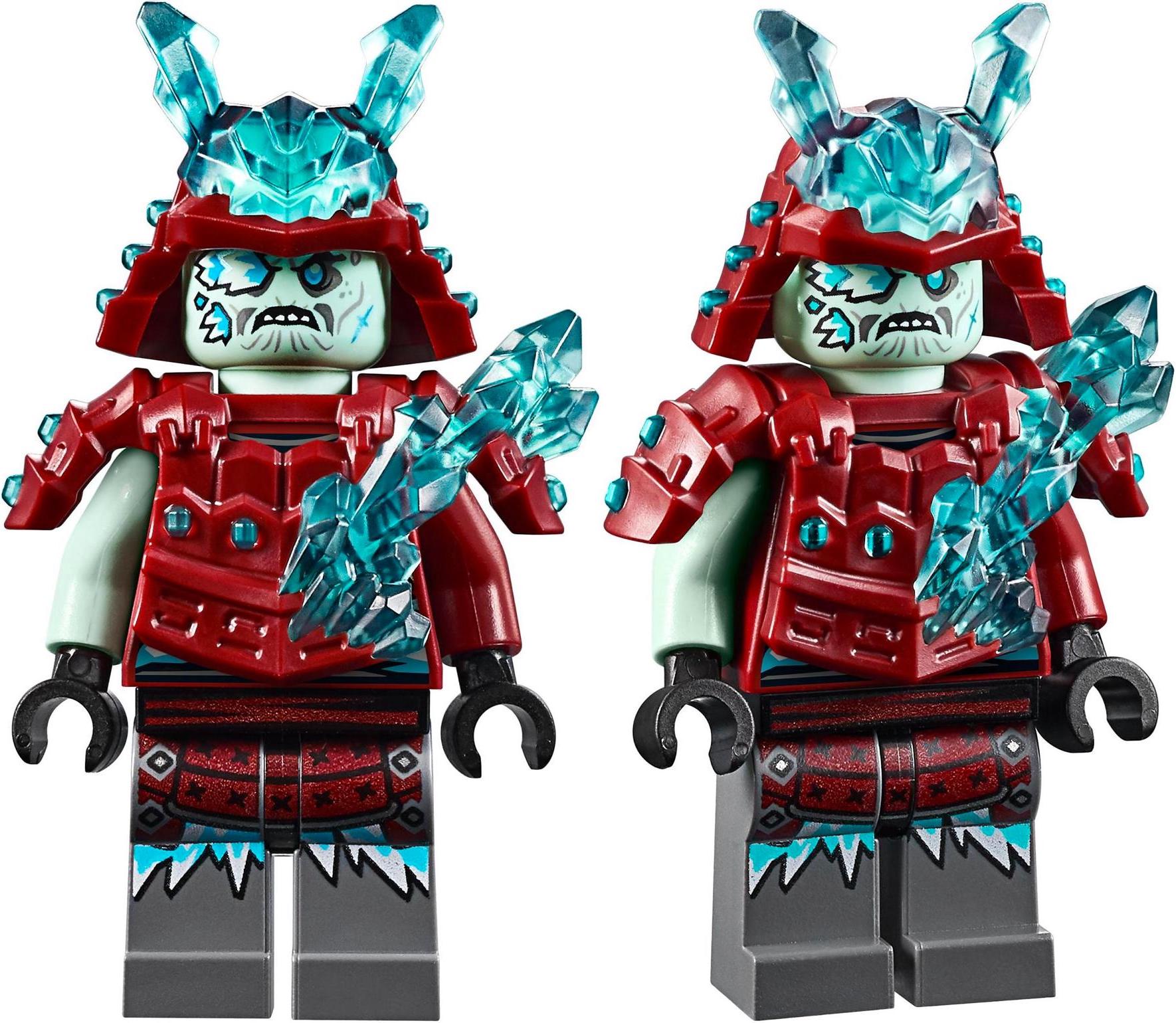 The second minifigure in the set is officially designated as a “Blizzard Samurai”, with icy features and dark red samurai armor. As some LEGO fans have pointed out, this seems to bear some resemblance to the icy White Walkers from Game of Thrones. Anyway, this minifigure has a new fabulous helmet mold with a dark red base color and translucent light blue segments for protruding icicles. The minifigure’s head is double-sided and is light aqua in color, with a fearsome expression. One side of the head even has ice protruding out of the samurai’s face! The samurai has a new dual-molded armor piece (in dark red and translucent blue) that continues the icy armor theme. There is printing on the torso and legs which continues the icy theme, and the samurai’s right arm is light aqua-colored to show that the minifigure is sleeveless. 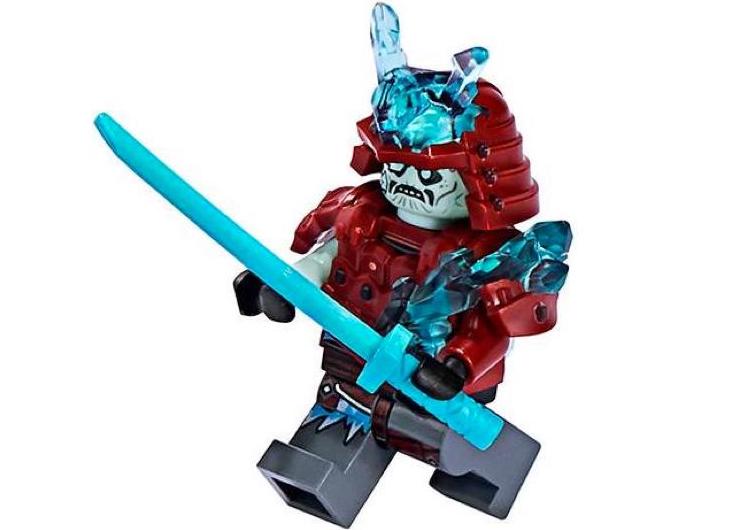 The LEGO Blizzard Samurai minifigure is armed with a blue katana piece that looks pretty good and continues the ice-inspired theme. 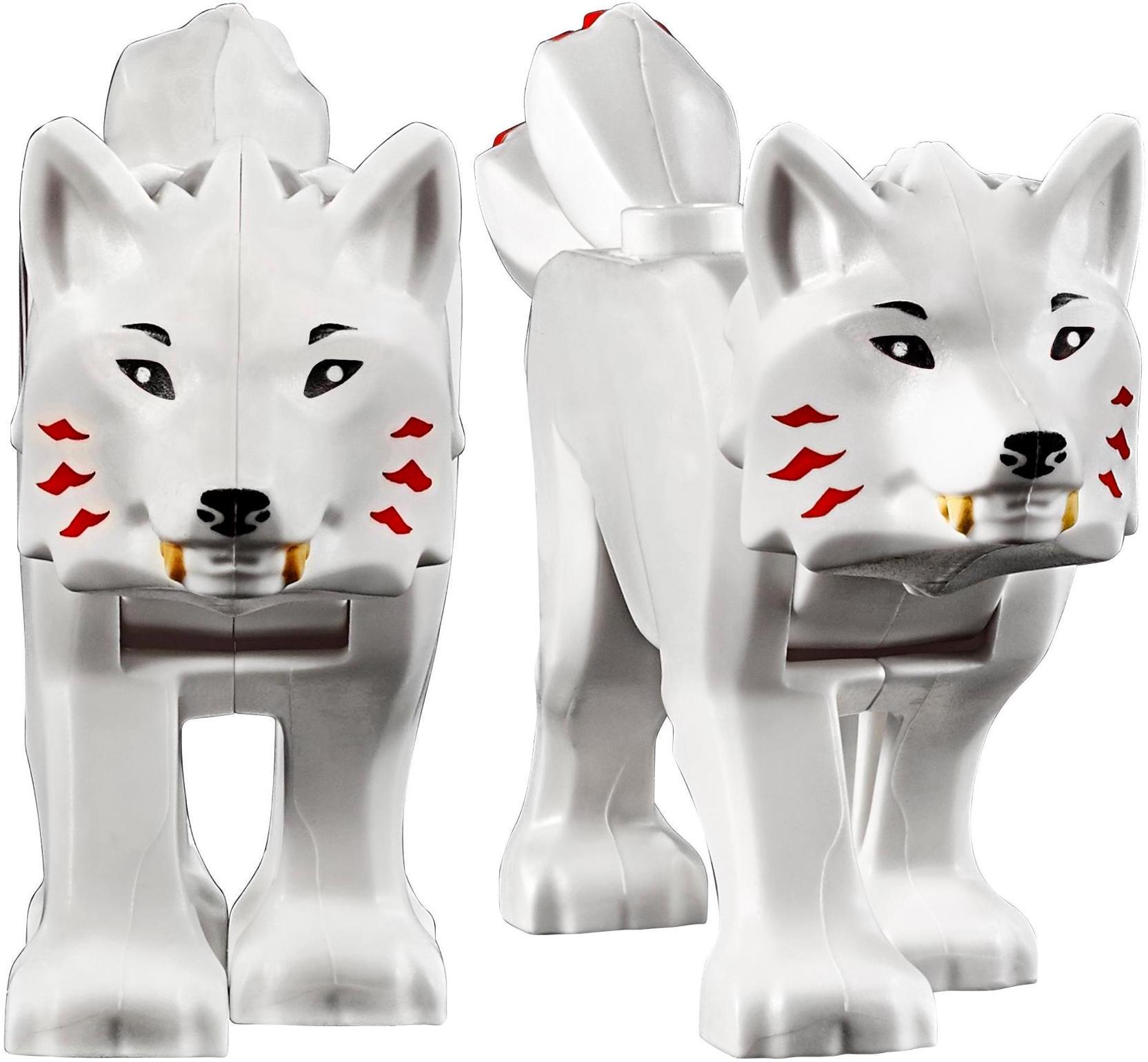 The final figure in the set is not really a minifigure, but is instead a brand new fantasy-style wolf! It has a predominantly white color scheme with some red highlights. The face is molded well and has nice printing on it to show its eyes, snout, teeth, and some red fur highlights. 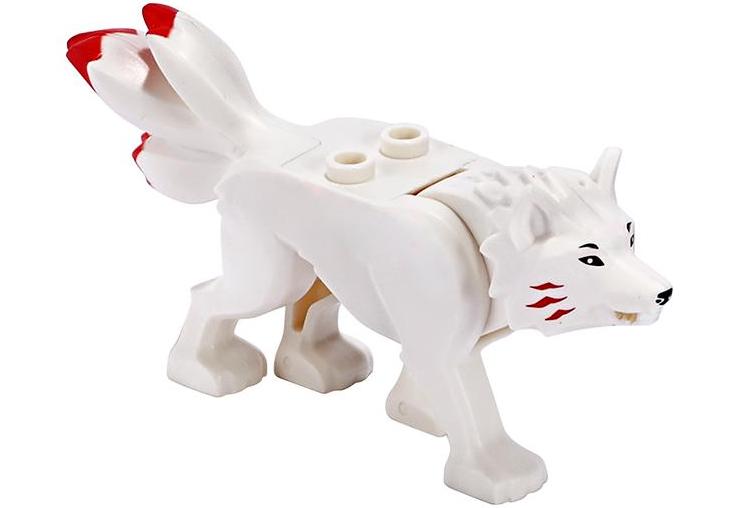 The wolf is one single piece and unfortunately does not have too much articulation. The head can hinge up and down but that’s it. The legs are static, though the way they are positioned looks alright. 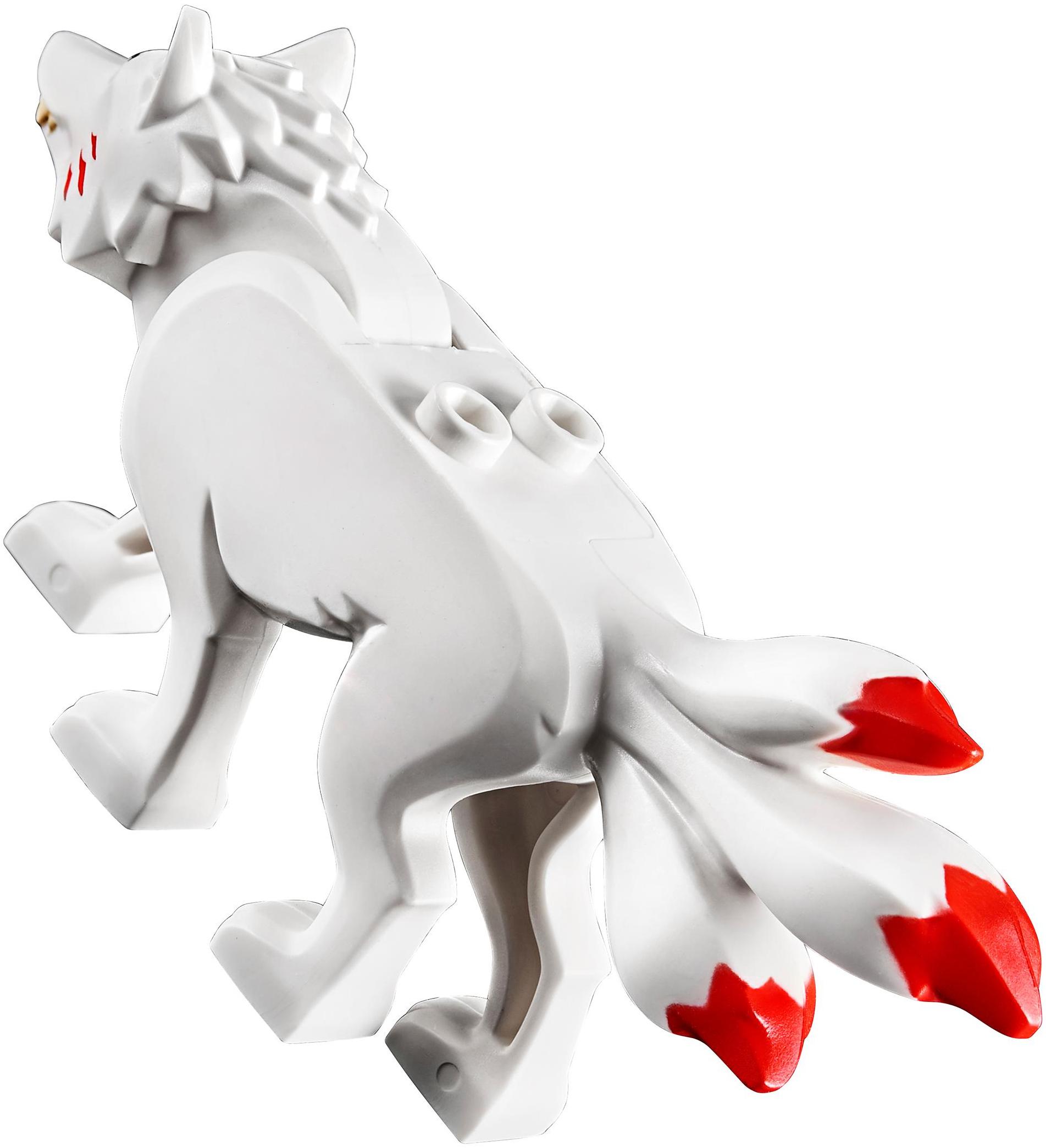 However, the most interesting defining feature of the wolf is the red triple tail. The wolf has three tails and these all have printed red tips, which sets this wolf aside as a fantasy creature. Based on the color scheme and important details, it seems that this wolf is highly linked with the Akita minifigure found in 70678 Castle of the Forbidden Emperor – the in-universe connection remains to be seen in the show! 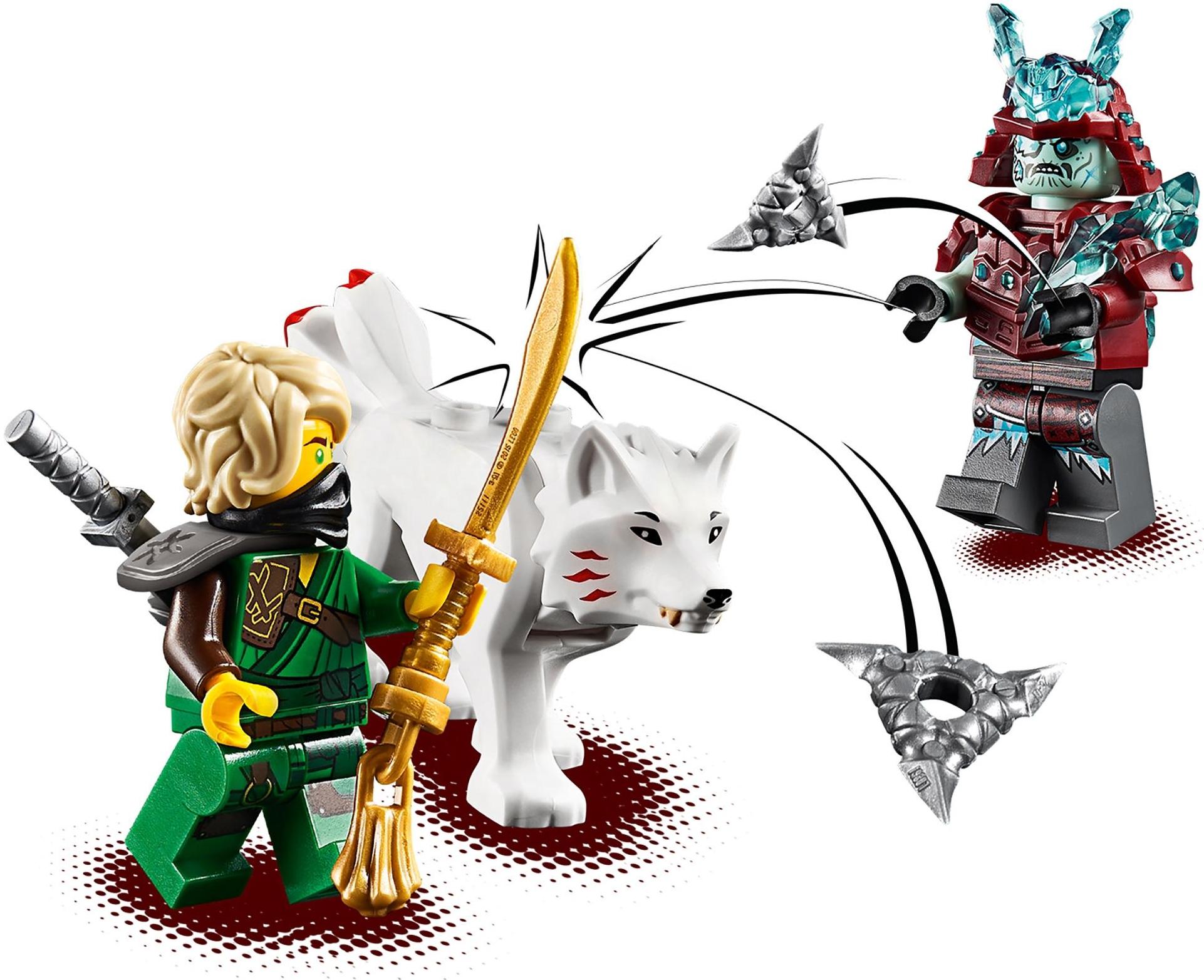 On the whole, the minifigures in the set are easily a huge draw, and while the selection is certainly good, I cannot say it is mindblowingly so. It is good to get Lloyd in his new outfit, and the Blizzard Samurai is cool, but neither are exclusive or particularly exceptional in my opinion. The exclusive wolf is the biggest draw but I personally am not a huge fan of it, especially since it is limited to a fantasy/Ninjago setting. Personally, I would have preferred it if it was a regular white wolf, though I understand some LEGO fans might hold differing opinions. 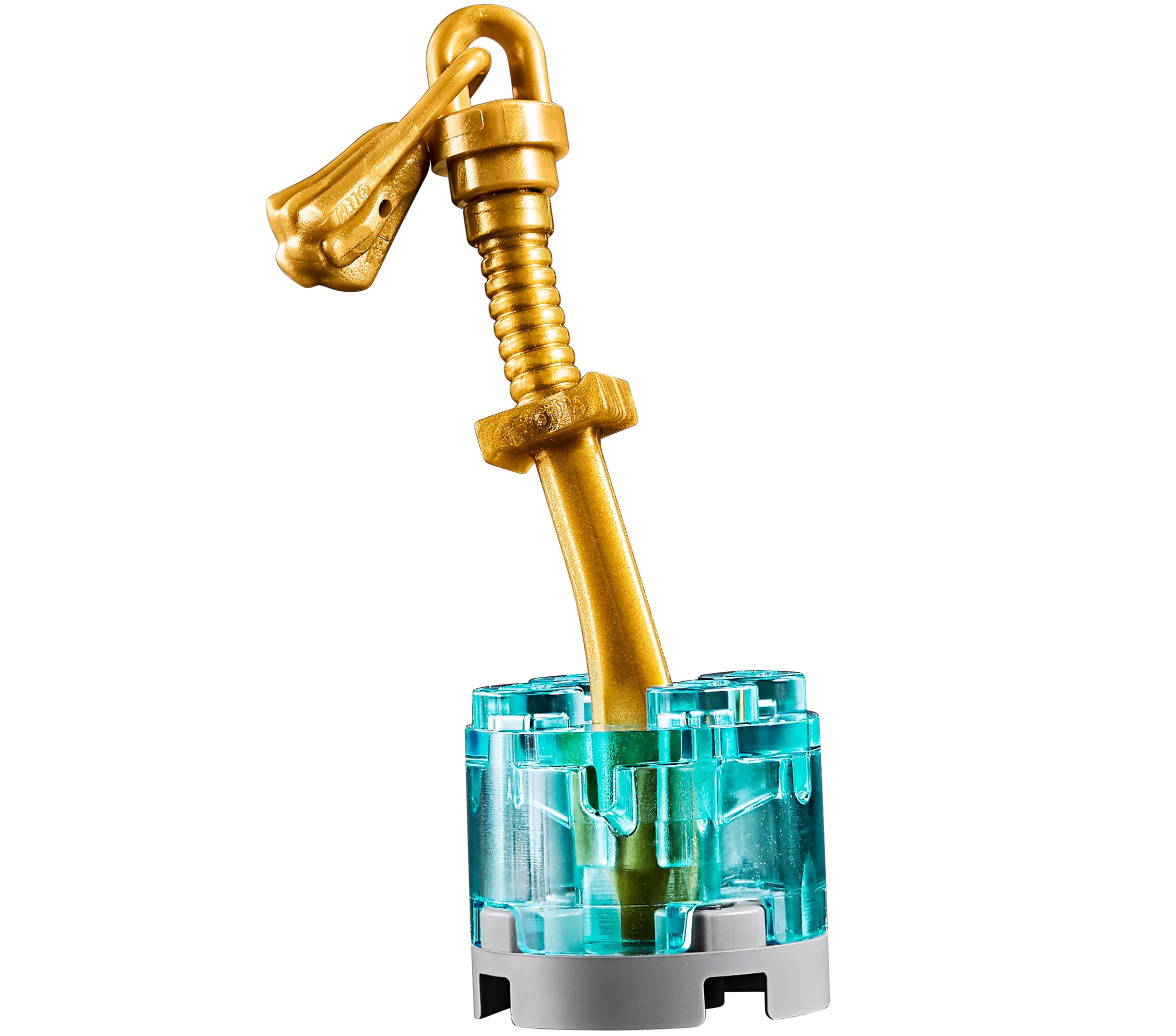 Now we move on to the builds of the set. There’s one tiny side build included in the set, which is basically just a golden ninja sword stuck in ice. This sword uses the mold initially used for Lloyd’s sword in 70612, but in gold. It has a golden tassle piece at the hilt for added detail. The ice block is made from two pieces, and the axle hole in the parts allows the sword to be inserted. 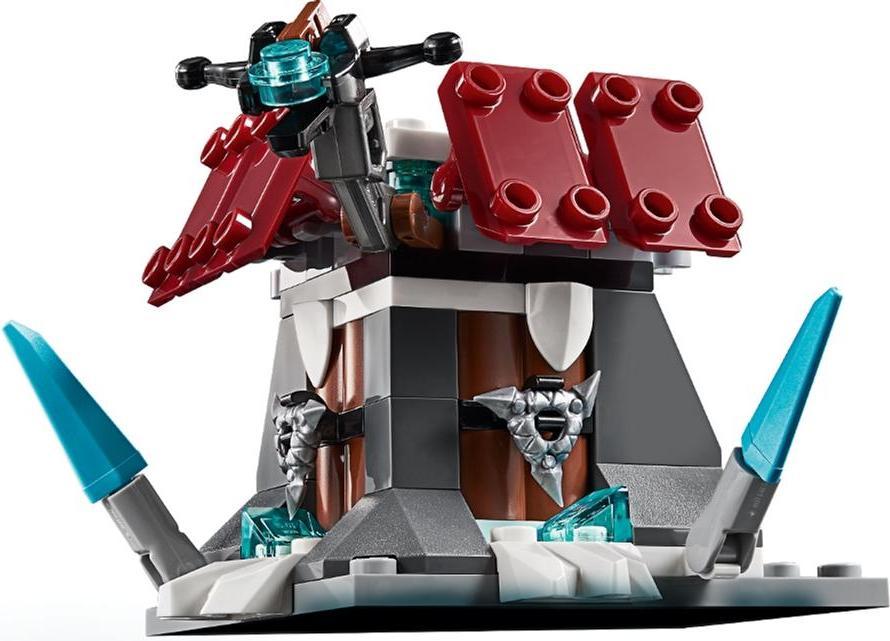 The main build in the set is a small outpost for the Blizzard Samurai. It’s intended to be a small section of a fortress, but I see it as more of a small lookout post. It has a grey base to give it a rocky design, along with some white and trans blue ice designs plus some dark red and brown manmade sections. 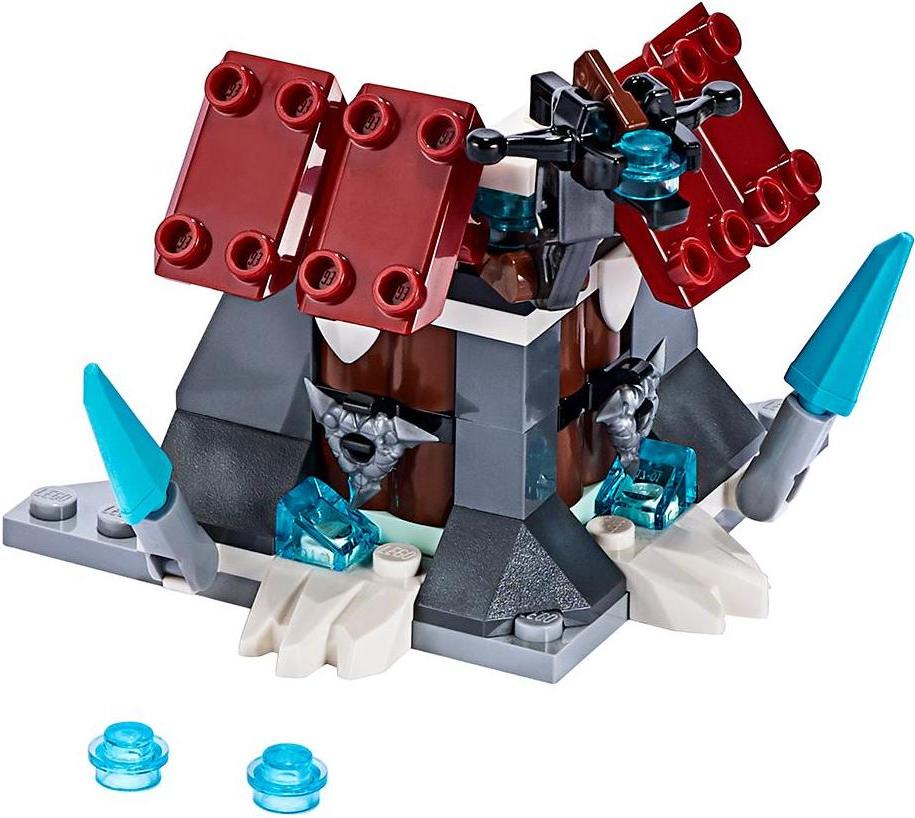 The fortress is built on a light grey angled plate. There are two white rock pieces used on the base to represent snow, along with some translucent blue cheese slopes to represent ice. There are two blue spikes on either side, along with two silver ninja stars clipped on the walls to scare off enemies. You can remove the ninja stars and use them as minifigure accessories if you like. There are four dark red roof panels that are made from a relatively new rectangular shield piece. It’s a fairly decent part reuse and it looks alright. 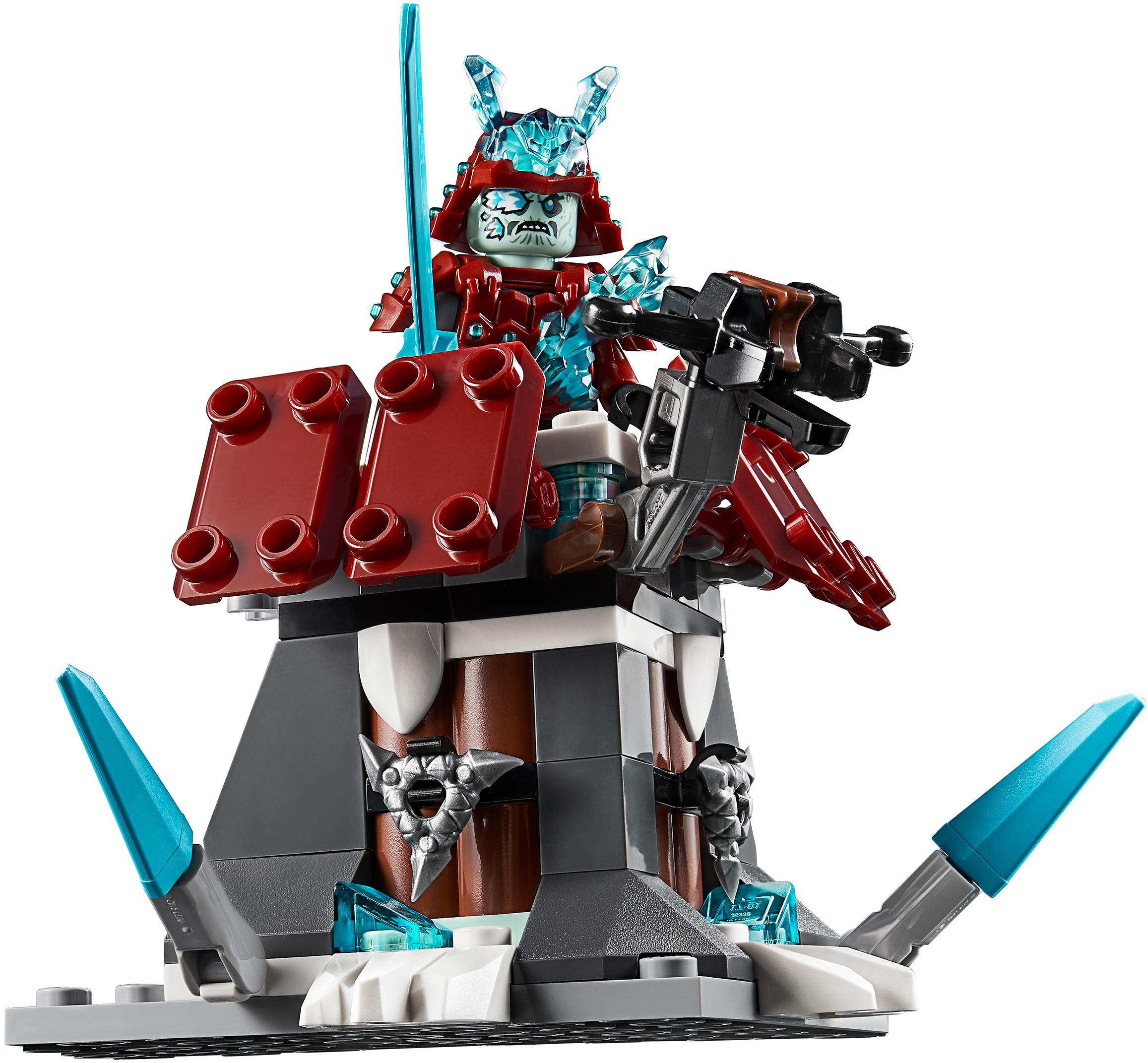 You can place a minifigure at the top of the tower. There’s a stud-shooting crossbow that is mounted on a robot arm; this is the tower’s primary defense. 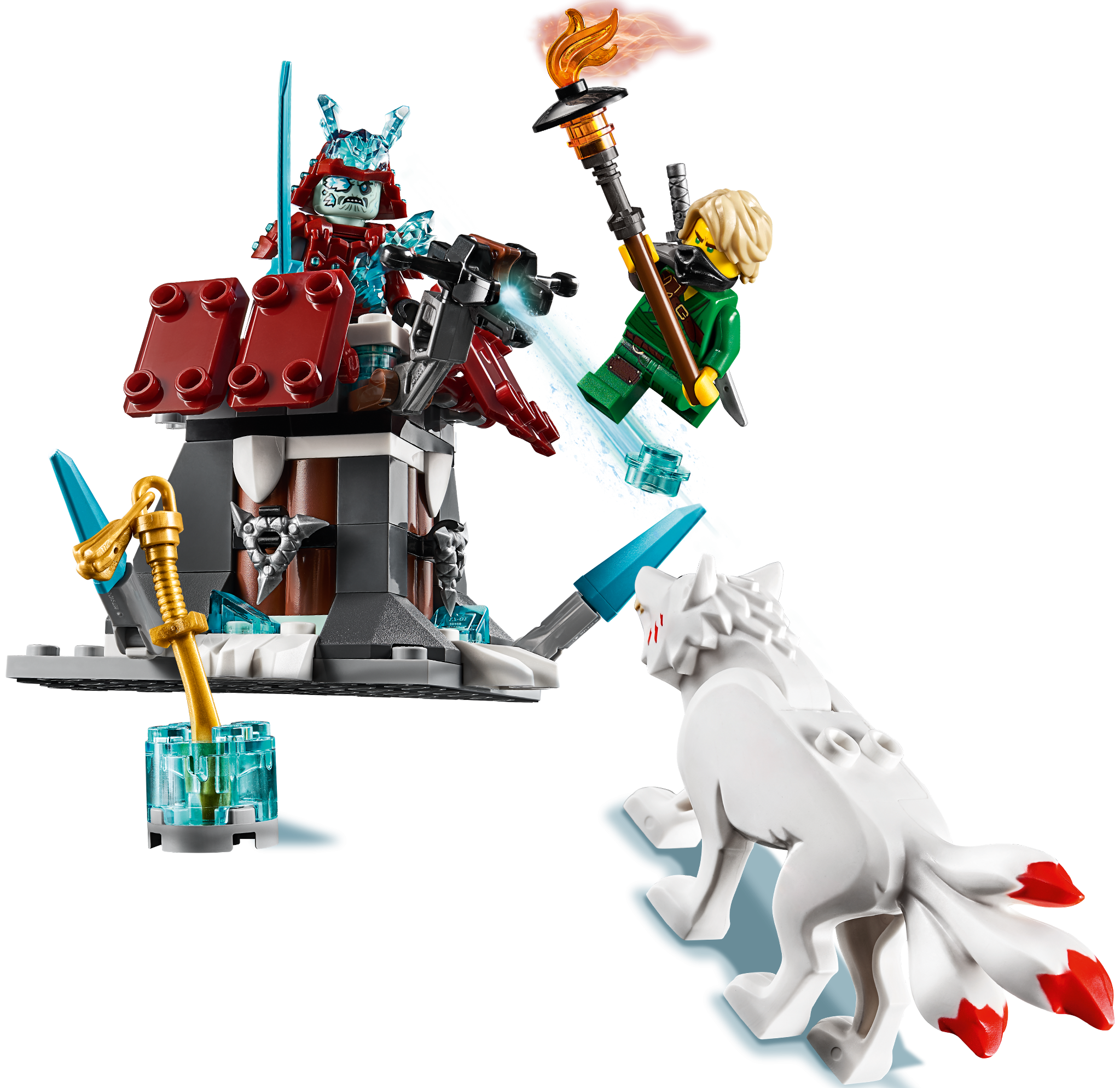 You can load the stud-shooting crossbow with the included 1×1 translucent light blue studs and fire the crossbow at enemies. Due to its clip connection, the crossbow can be hinged up and down and also rotate side-to-side. 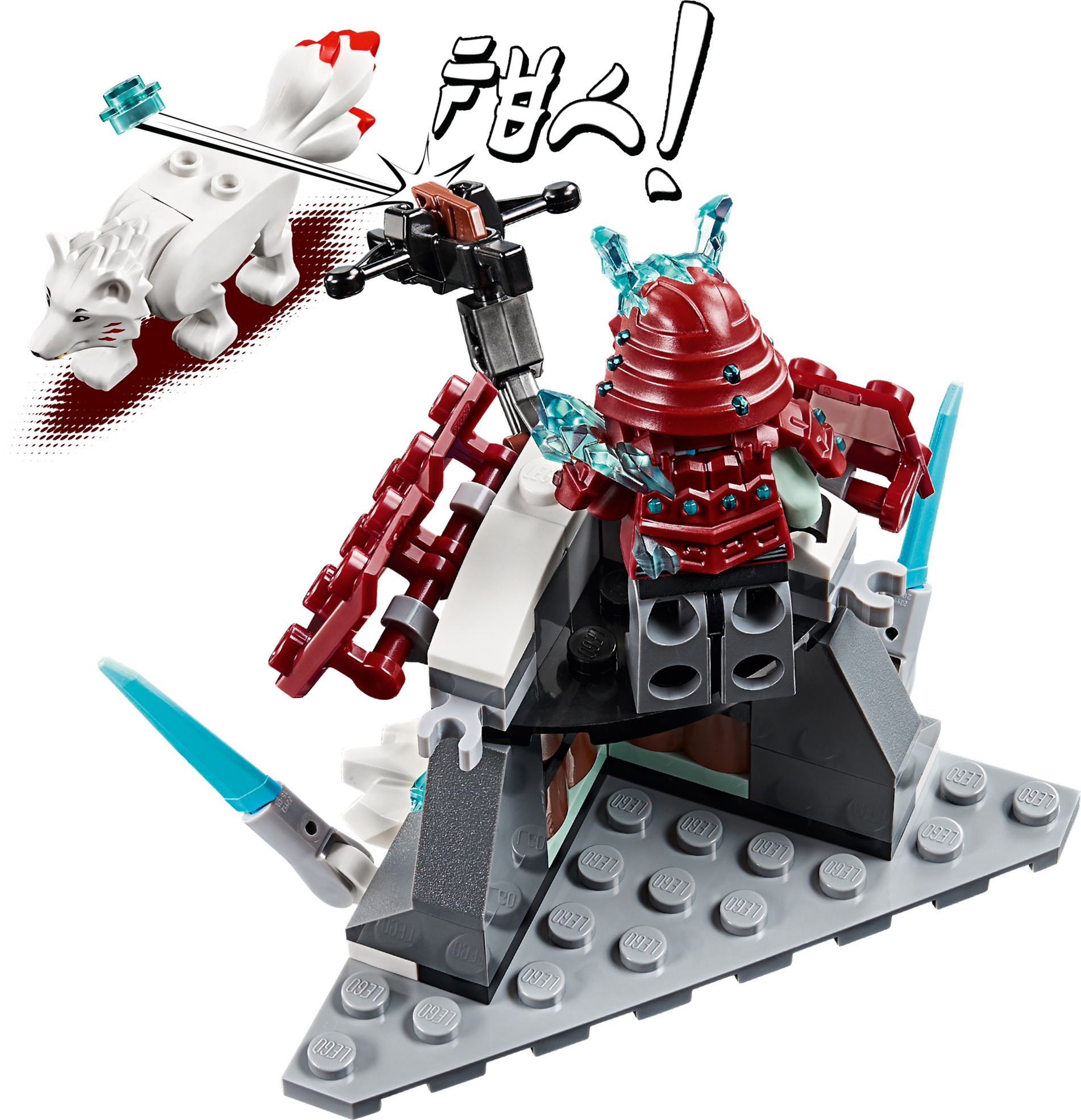 Here’s a look at the back of the fortress. The interior is completely empty which is slightly disappointing; I think there was enough space that the designers could have fit in some small details like a weapons rack. Regardless, there are two clips on the top part for accessories, and there is just barely enough space to fit a guard on the upper level.

On the whole, I think this set is alright. It’s pretty decent as far as small sets go but if you’re looking for something truly of substance then this isn’t for you. It’s a good thing to whet your appetite for this wave of LEGO Ninjago sets, but the actual structure of the set leaves much to be desired. It’s very small and there isn’t much room or stuff to play with. The minifigures are easily the strong suit of the set, with the exclusive new wolf. The wolf is great, the Blizzard Samurai is pretty cool, and it’s nice to get Lloyd in this set. The value of the set is okay I think – the new wolf mold must have used a lot of the budget, and the actual build feels very small and not very detailed for the price.

Thank you all very much for reading! Let me know your thoughts in the comments section below. Do you agree or disagree with my review? What’s your favorite part of the set? Comment below! 🙂