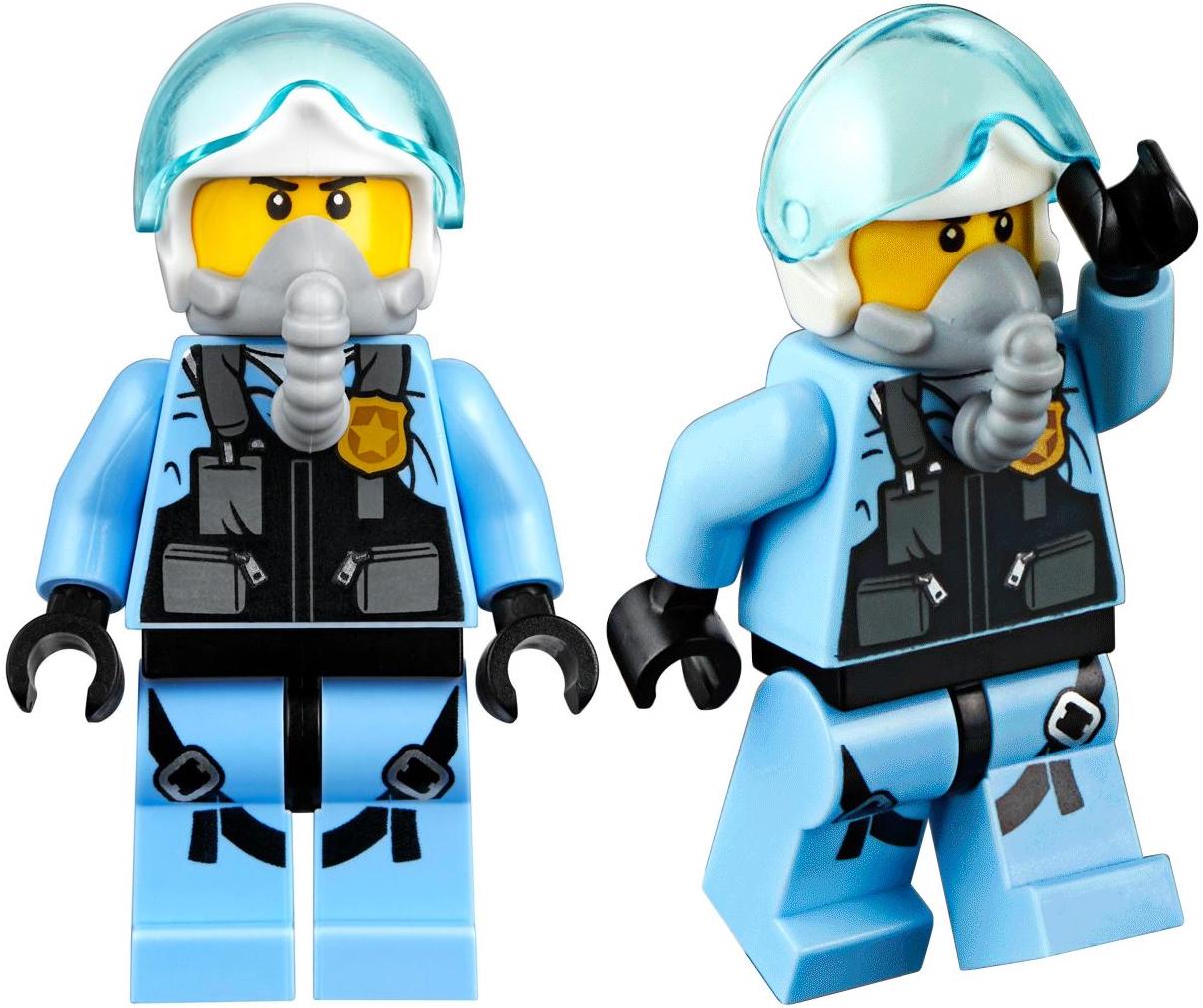 The first minifigure in the set is the Sky Police pilot. This minifigure has a white helmet mold and a new visor piece, which has a really wide design and a translucent light blue color. He has a determined face print and comes with a brand new light grey oxygen mask mold. This oxygen mask is compatible with the white helmet and looks absolutely fantastic – I hope it will be used in other themes. The police officer wears a light blue outfit with some black highlights, including a printed vest and leg straps. For accessories, this LEGO City Police minifigure comes with a pair of handcuffs. 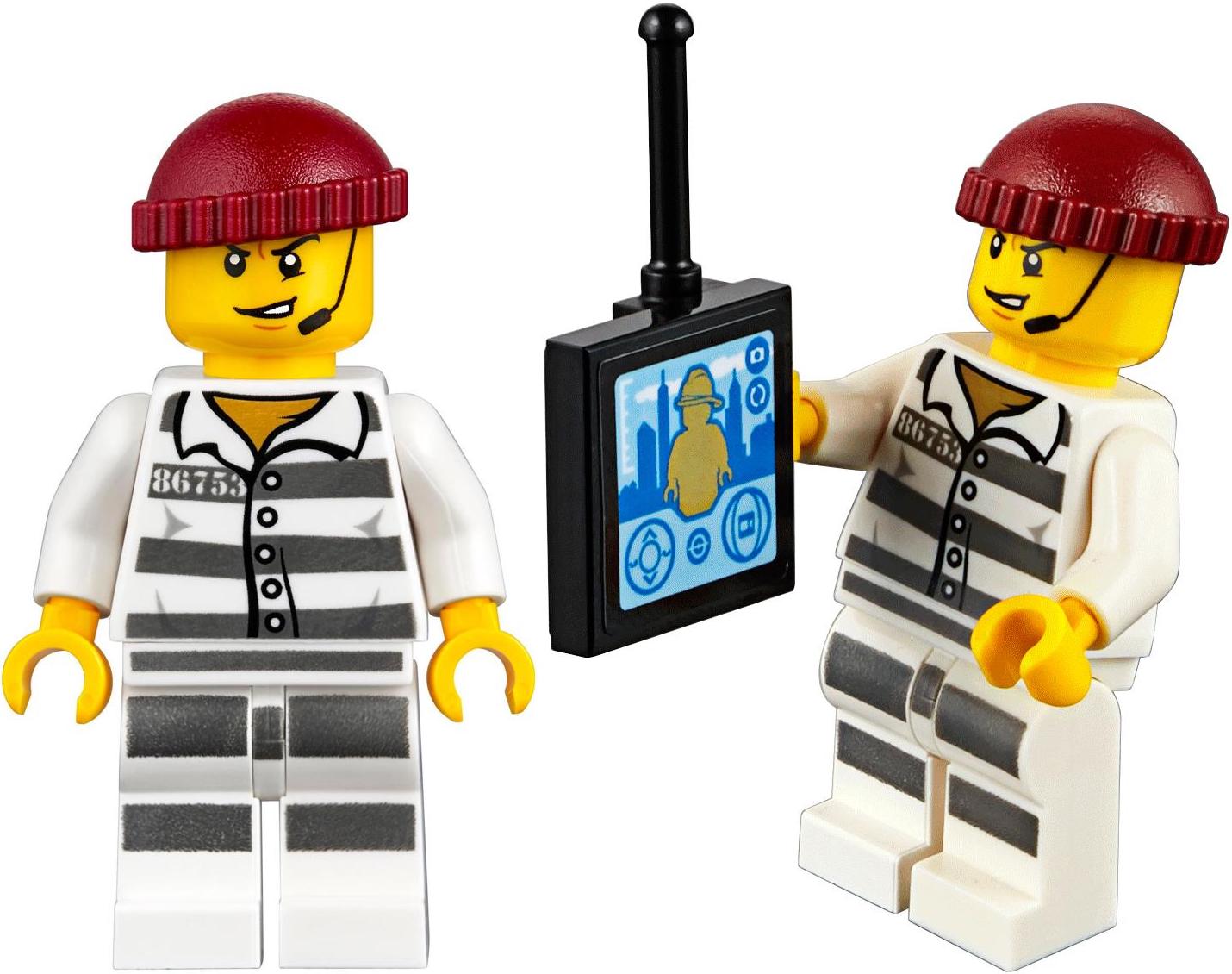 The second minifigure in the set is a crook! This crook is attempting to steal a gold statue in the set, and the police officer must arrest him! He wears a dark red knitted hat mold and has a new facial expression, with a devious grin and a printed microphone. He wears a white and grey prisoner outfit on his torso and legs – neither of these pieces are new. He comes with a drone remote control, built from a 2×2 stickered tile attached to a black walkie-talkie. The tile has a sticker which shows the drone’s controls, along with a view from the camera that shows the thief’s target in sight! 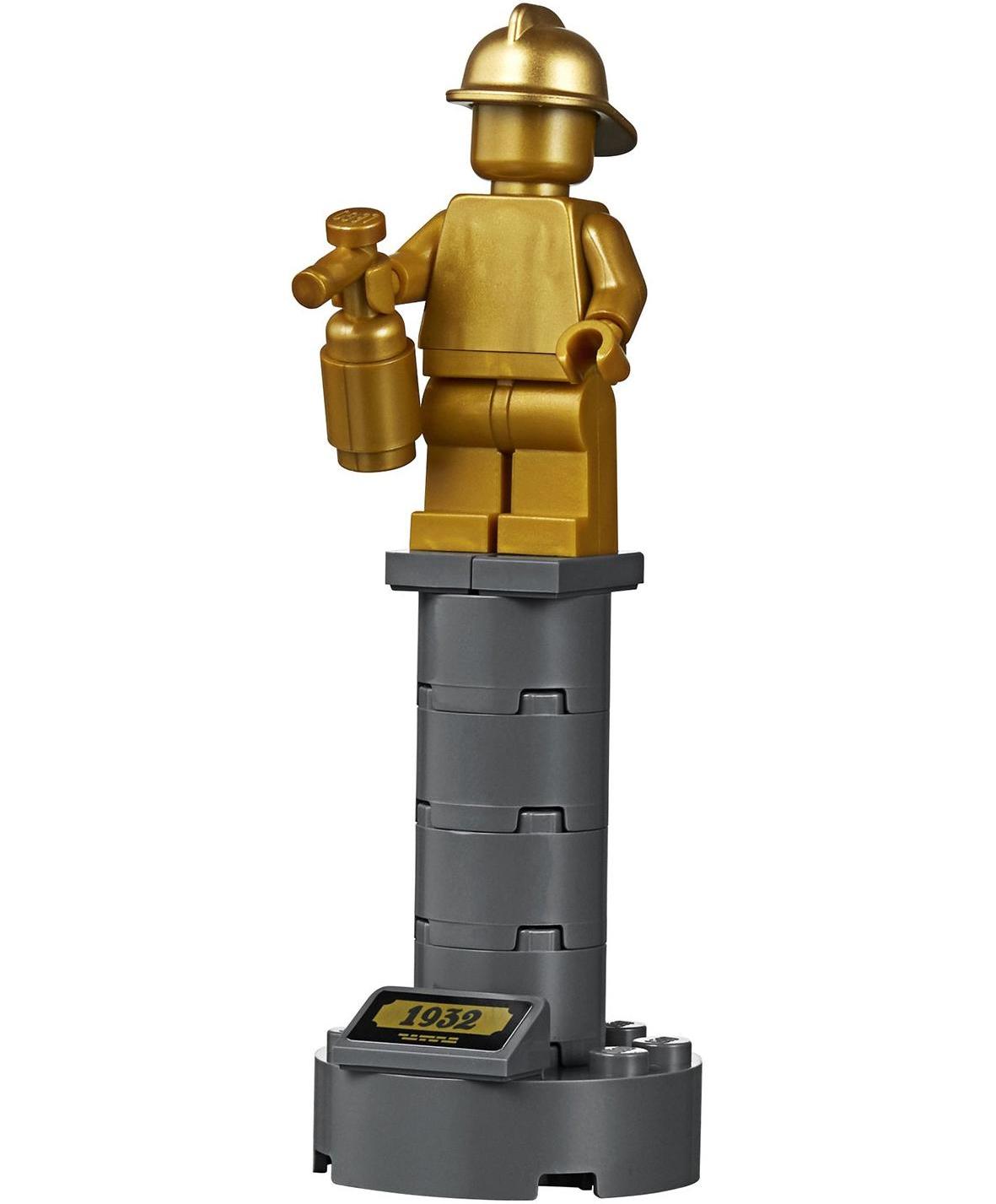 Now, on to the builds of the set. The first build is this statue, which has a gold fireman statue on top – this is what the thief is attempting to steal. There’s a simple dark grey stand to represent a stand built from stone. There’s a stickered 1×2 slope at the bottom with the date ‘1932’ – this is actually the year when the LEGO company was founded! 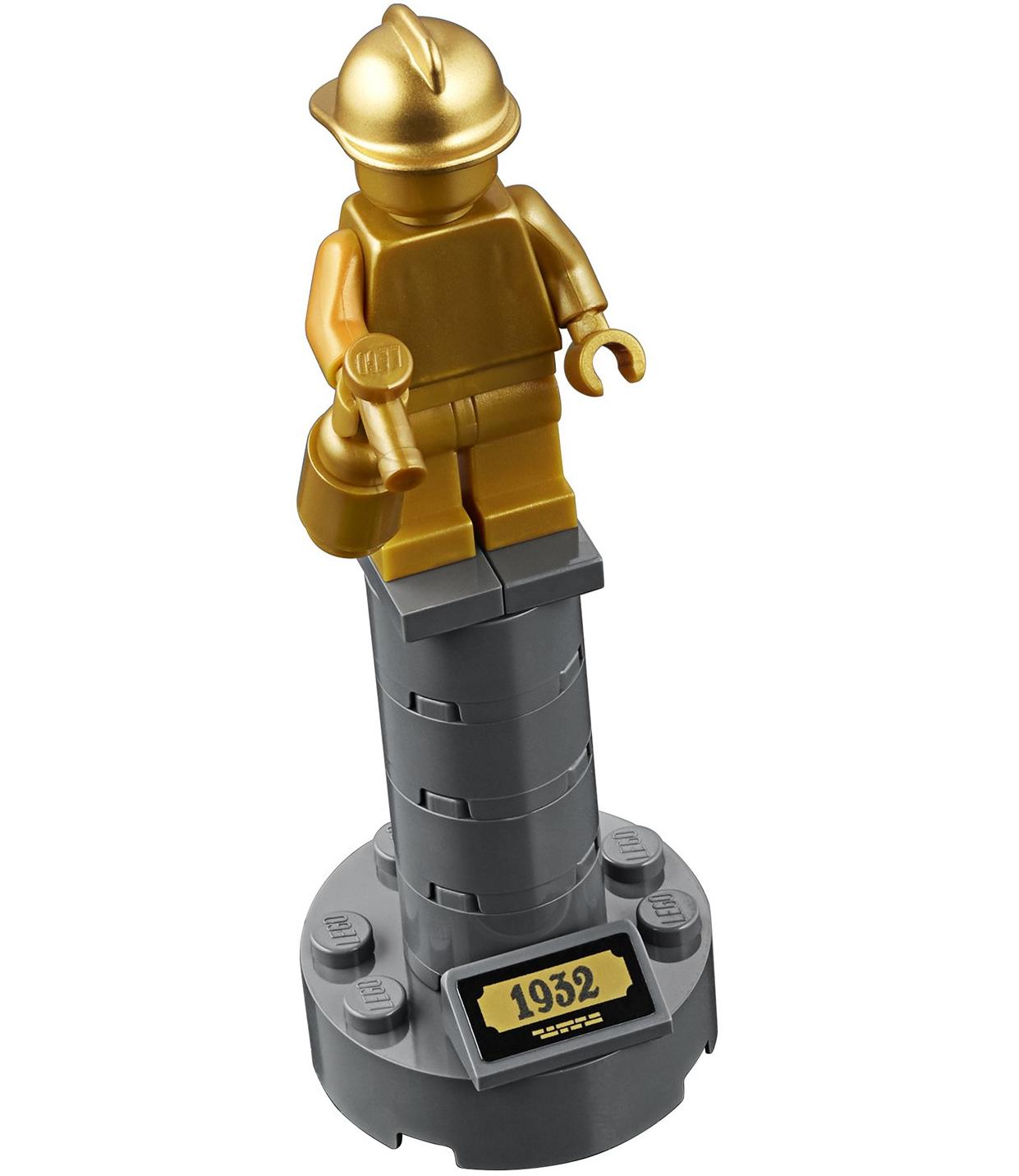 The actual LEGO fireman statue is the final minifigure in the set. It has an all-gold color scheme, and is made from six pieces. It looks great but oddly enough, the helmet is a different gold color that looks a lot shinier than the rest of the body. The helmet is metallic gold, while the rest of the figure is just pearl gold. I like the all-gold design of the minifigure but I wish the color scheme was consistent. 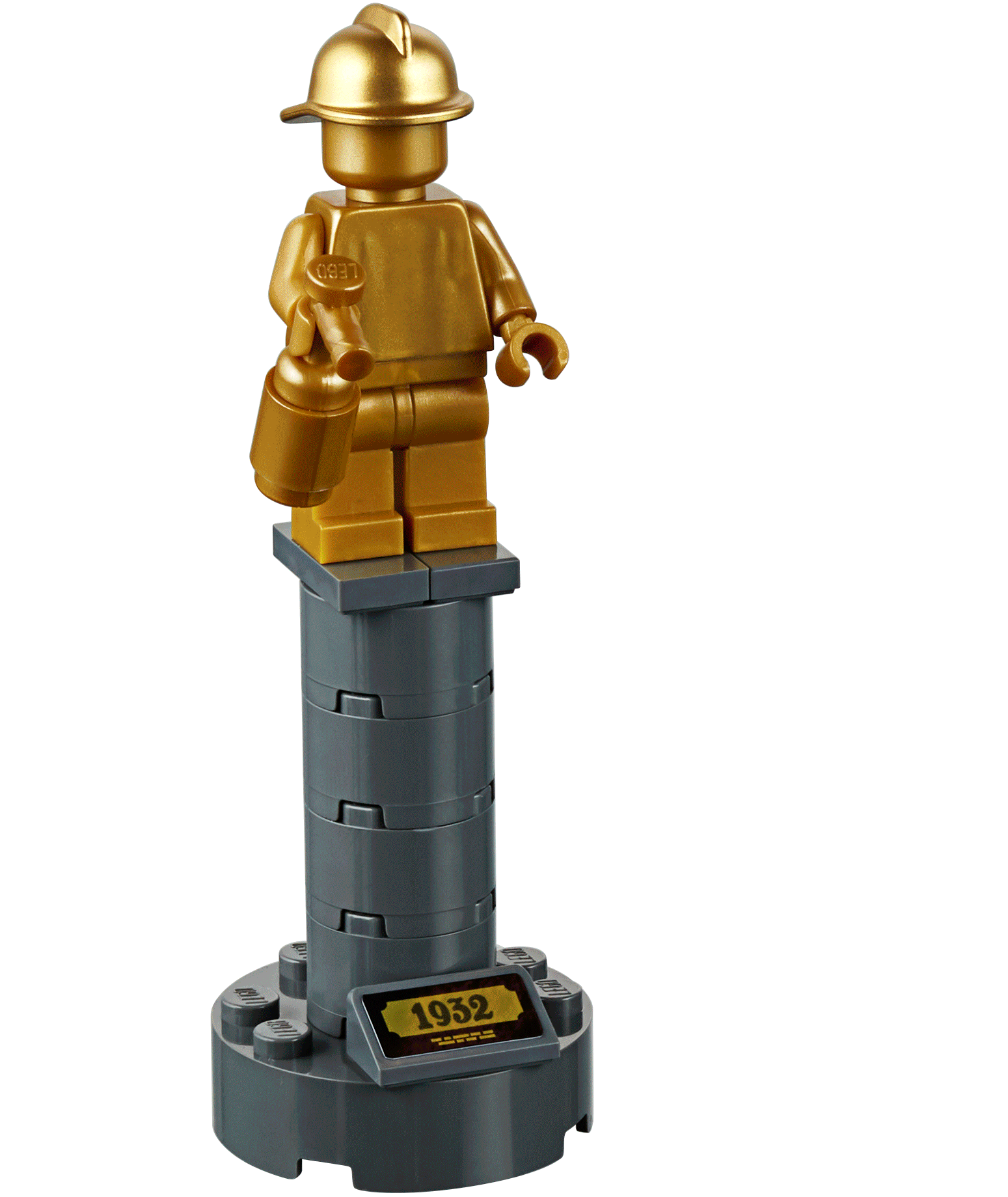 The minifigure is attached to the base by only one stud so it can rotate which is slightly unfortunate; however, this is not too much of an issue if you hold it by the base and don’t roughly handle it. It is designed to be easily removed, as this ties in with another play feature. 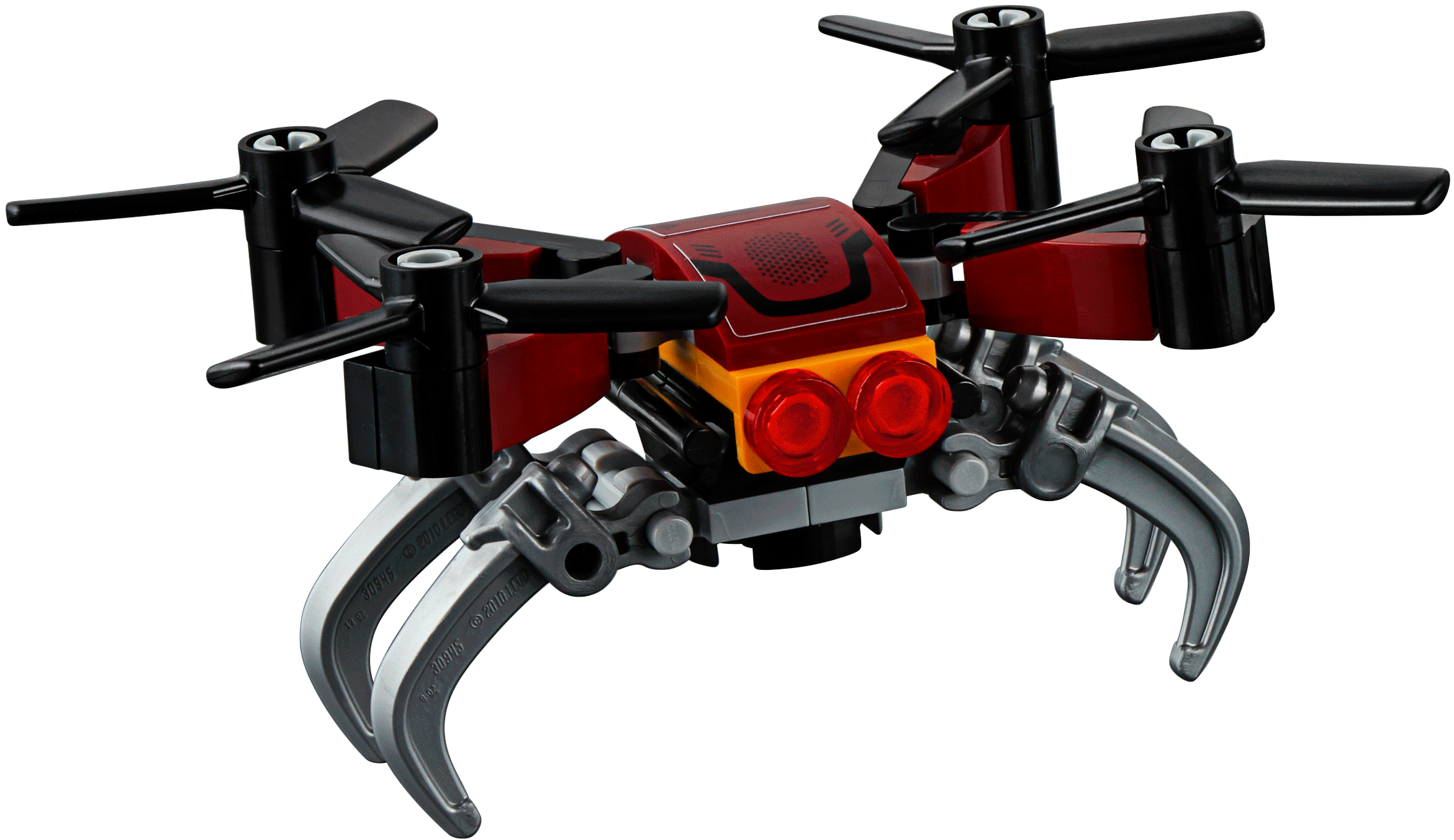 The second build in the set is the drone, which is operated by the criminal. Like a lot of the crook vehicles in the Sky Police subtheme, it has a dark red and orange color scheme. 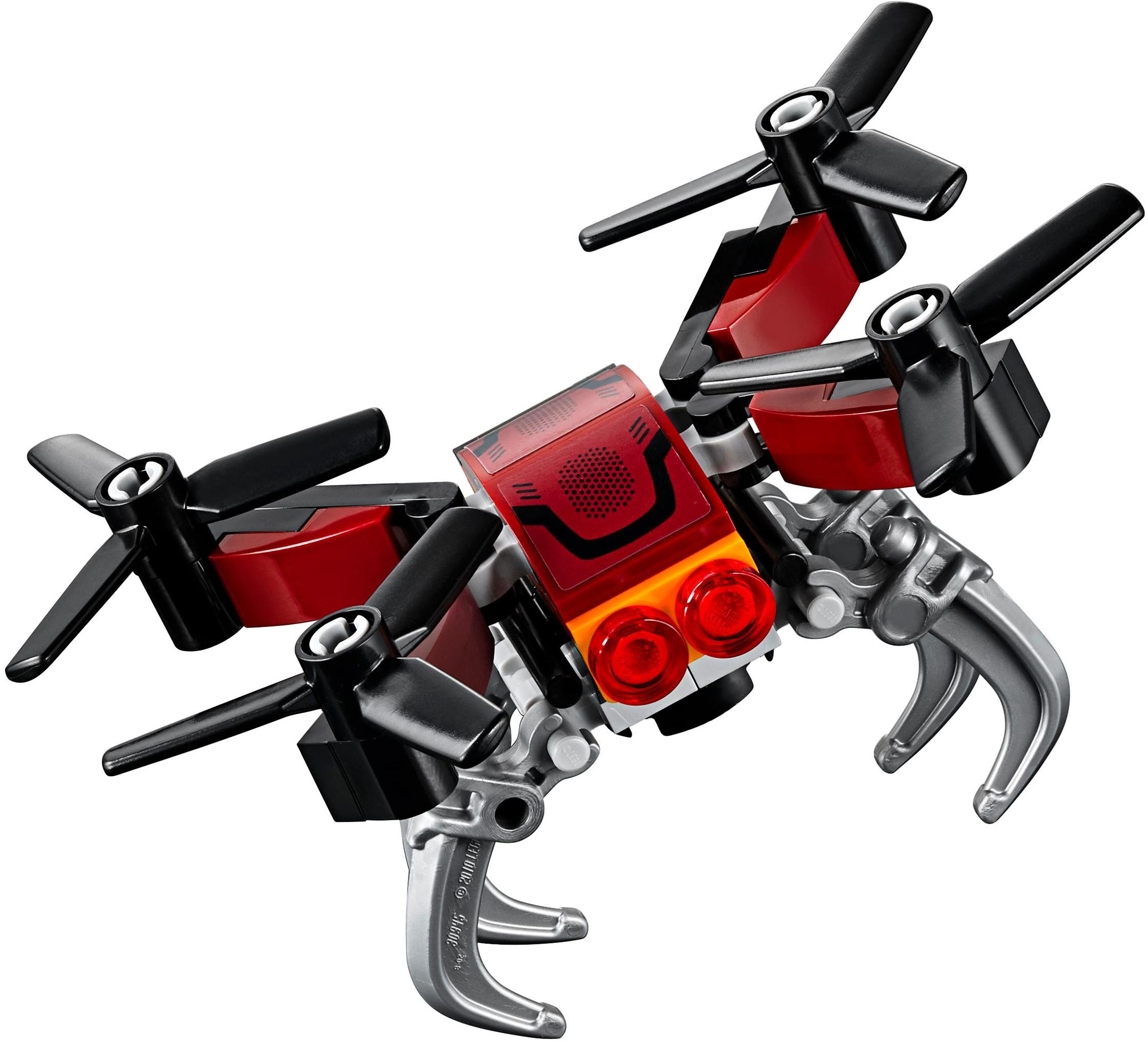 The drone features four rotating propellers, each mounted on an individual clip. There are two stickers used on top for added detail, and there are two translucent red 1×1 round tiles to represent the drone’s sensors. At the bottom, the drone has four silver grabber arms that can hold onto things. 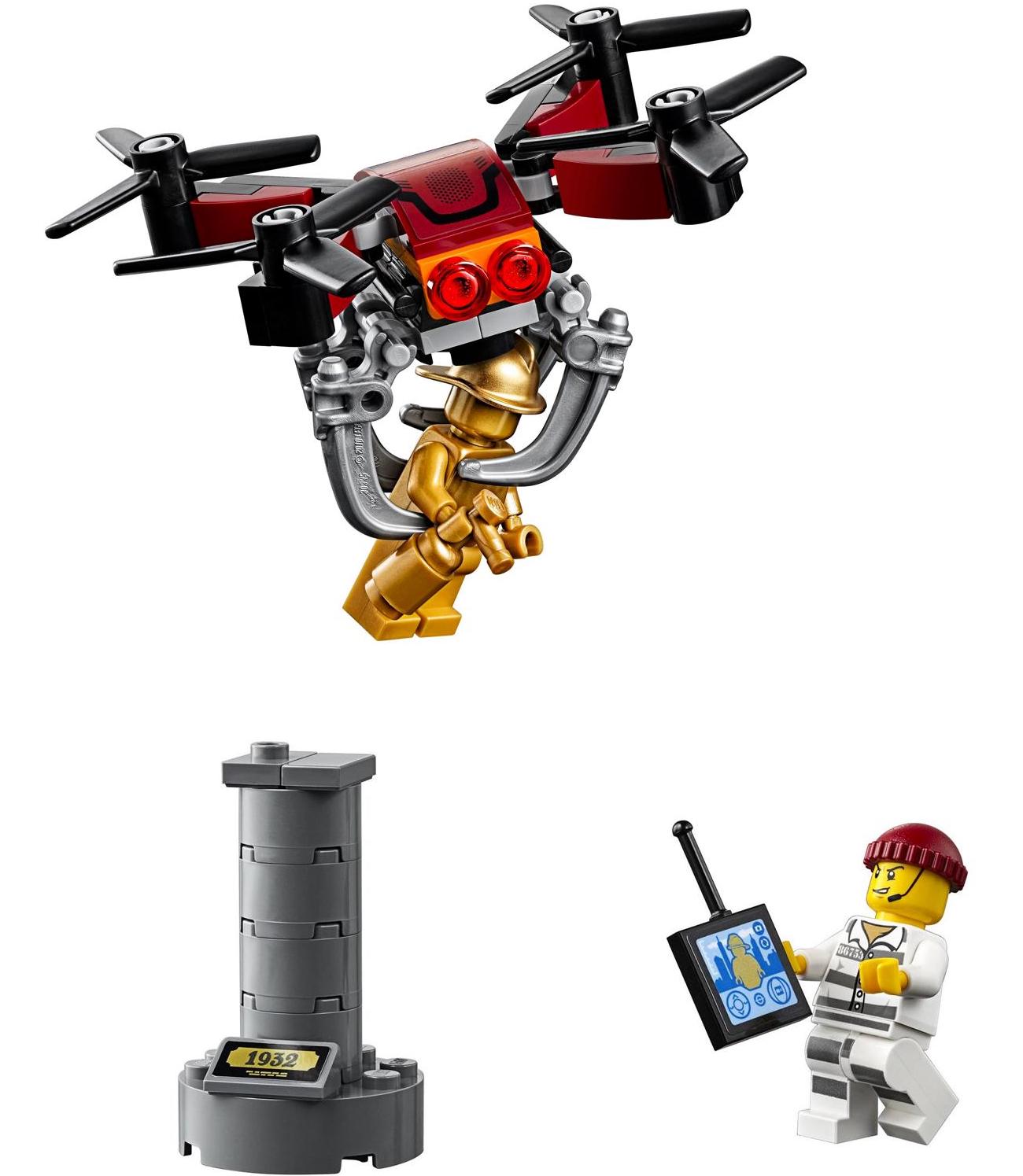 The idea is that the crook would remotely pilot the drone and use the grabber arms to lift up the golden fireman statue and steal it. This is why the fireman statue is only attached by one stud – it needs to be removed easily. Presumably the statue is made from solid gold and that is why the thief is stealing it, but then one has to question whether or not a drone would be able to lift something so heavy. Regardless, it’s a fun little feature that is an entertaining, modern premise. 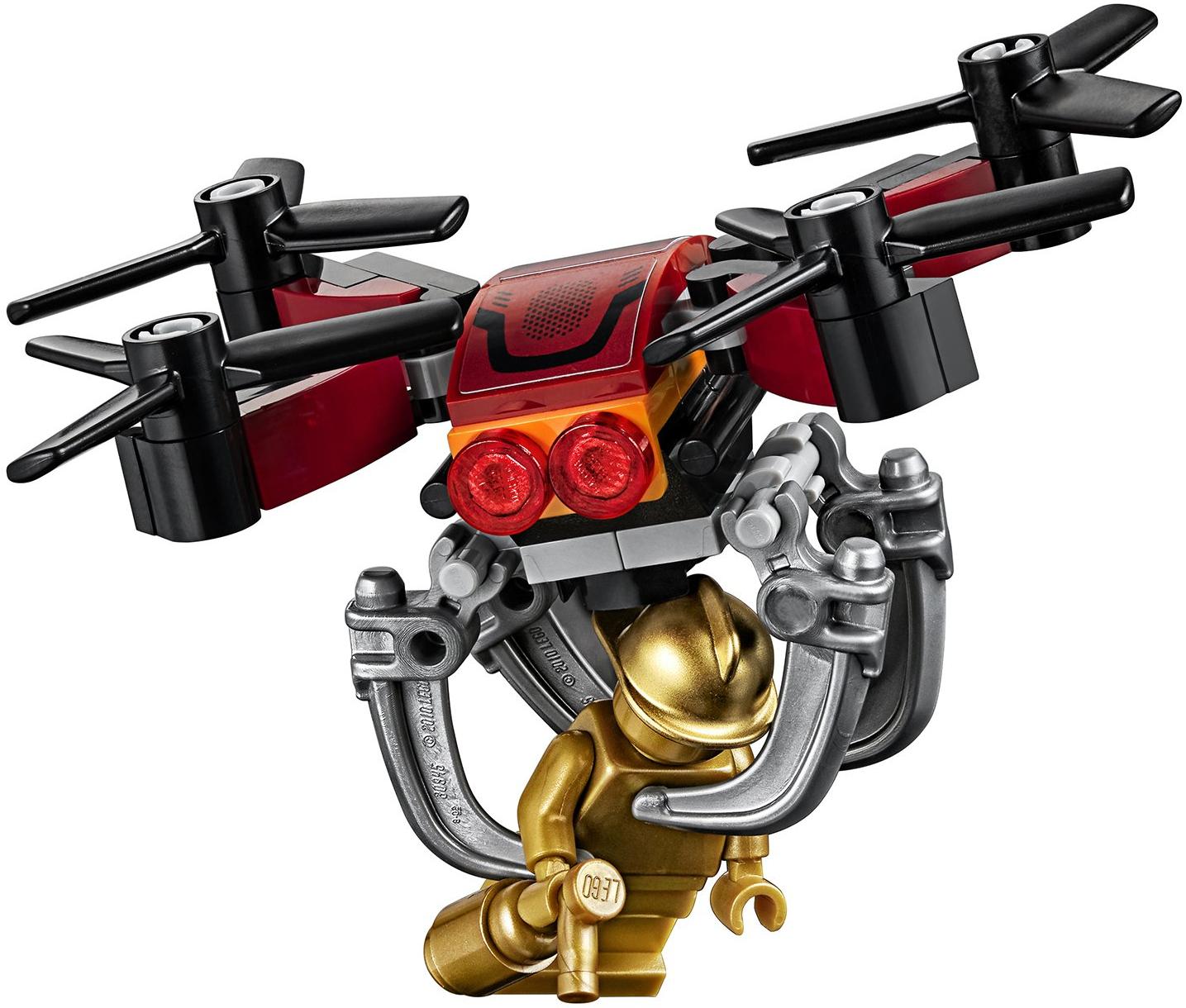 The four grabber arms do a decent job of holding on to the minifigure, and you can fly the drone around with the statue in tow.

Until you get arrested, that is. No statue stealing on my watch! 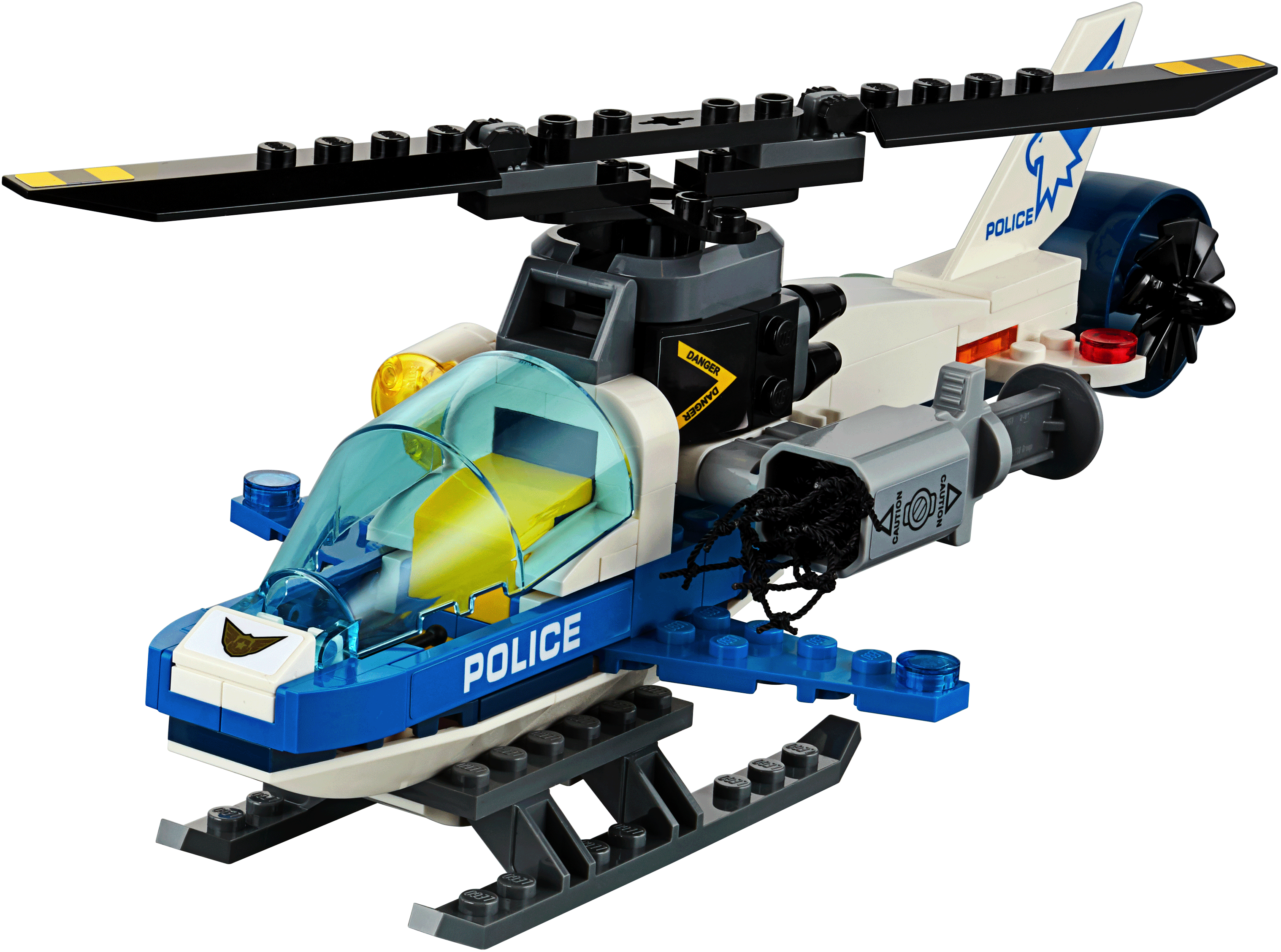 The main build of the set is the Sky Police helicopter. It has a white and blue color scheme along with some black highlights. There are quite a few stickers used throughout the model. However, I think the shaping is not particularly attractive and the color scheme is quite a mess. 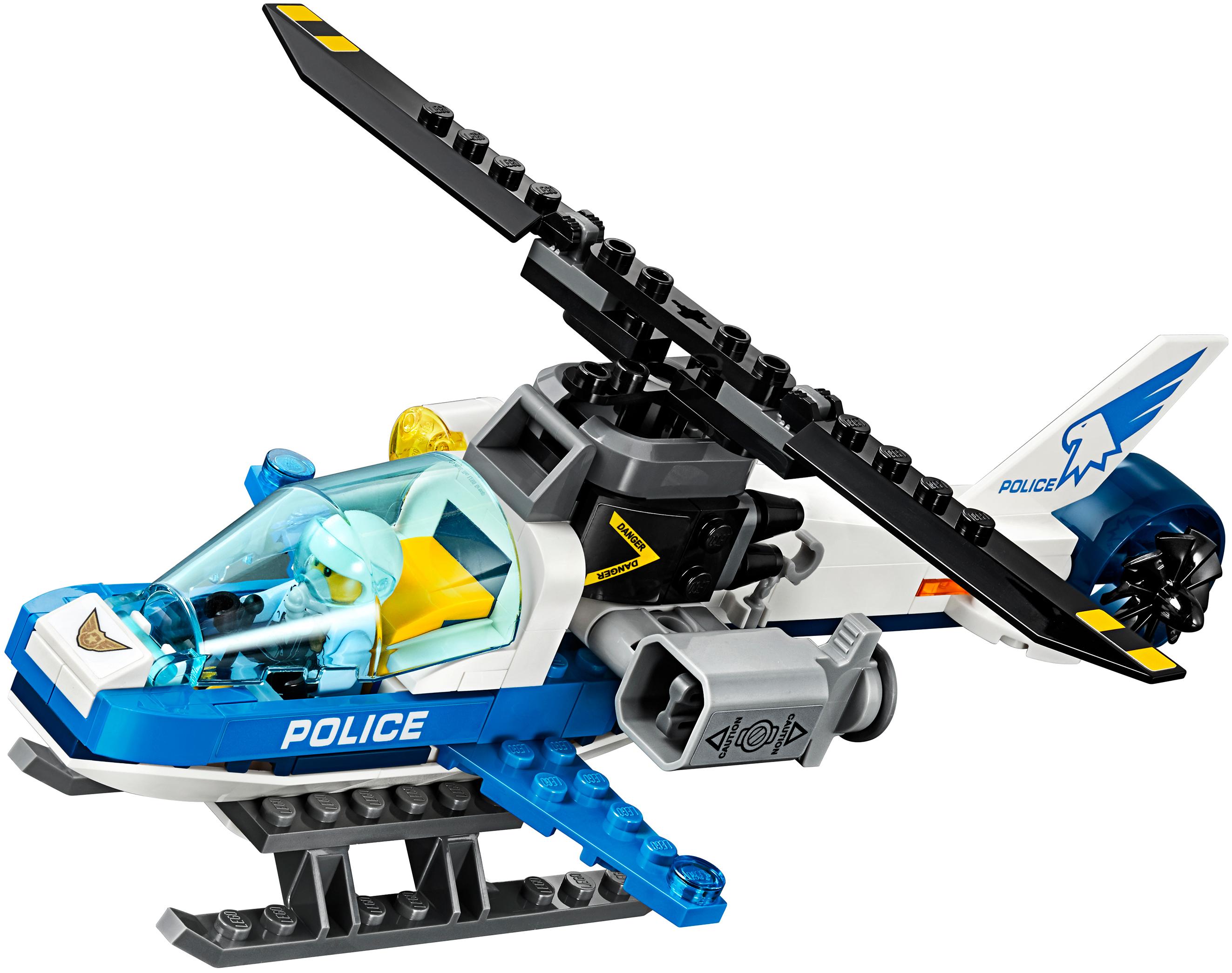 The cockpit is translucent light blue and you can hinge it open to put the Sky Police pilot inside. However, I feel that the shaping of this cockpit piece does not suit the helicopter’s overall design, and the gaps around the base of the cockpit glass are pretty ugly.. Two small wings protrude on both sides of the cockpit which just looks plain weird to me, especially with all the exposed studs. 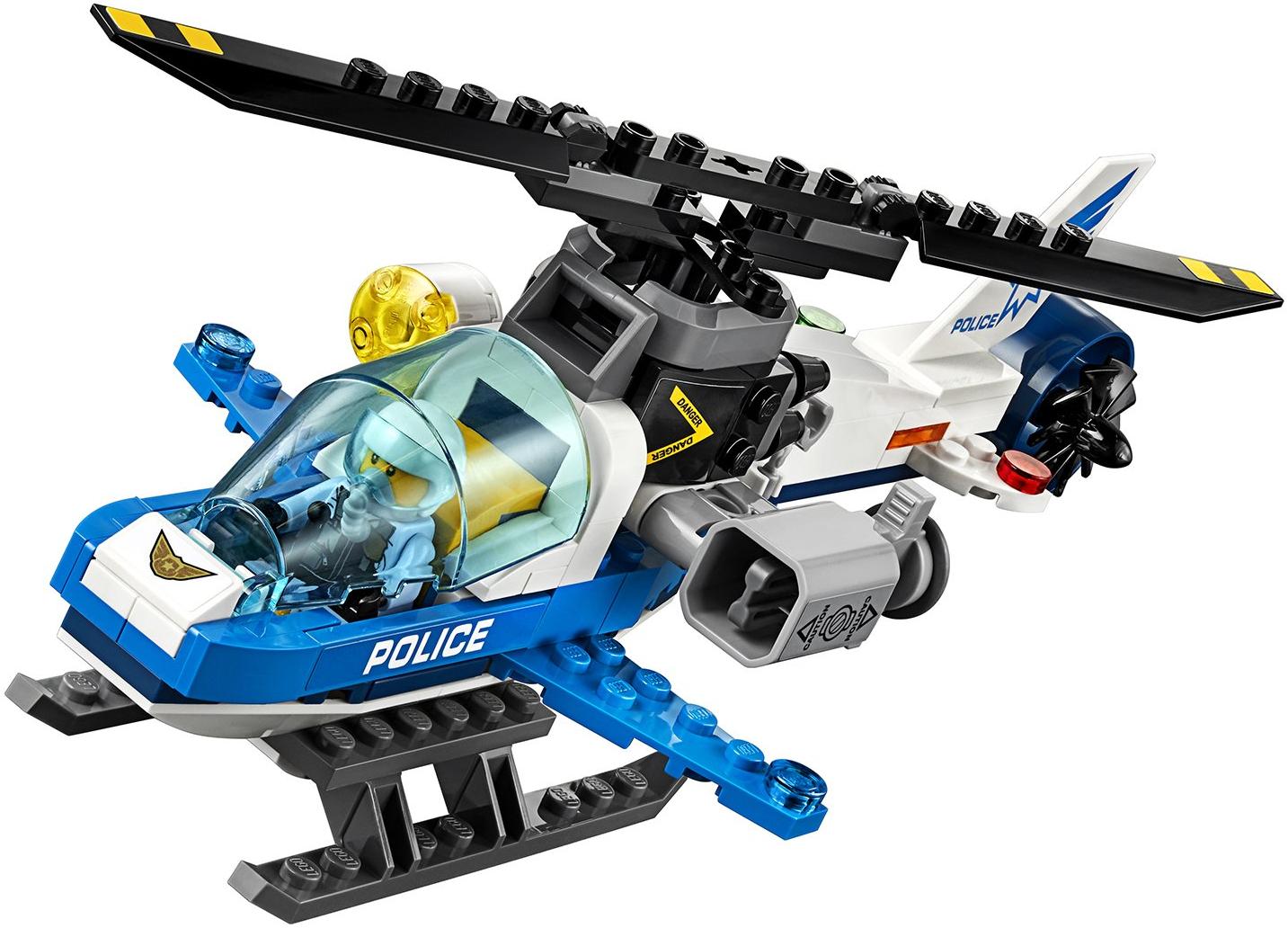 There’s a a fairly large rotating propeller on the top which you can rotate by hand, along with a smaller dark blue turbine mounted at the back. 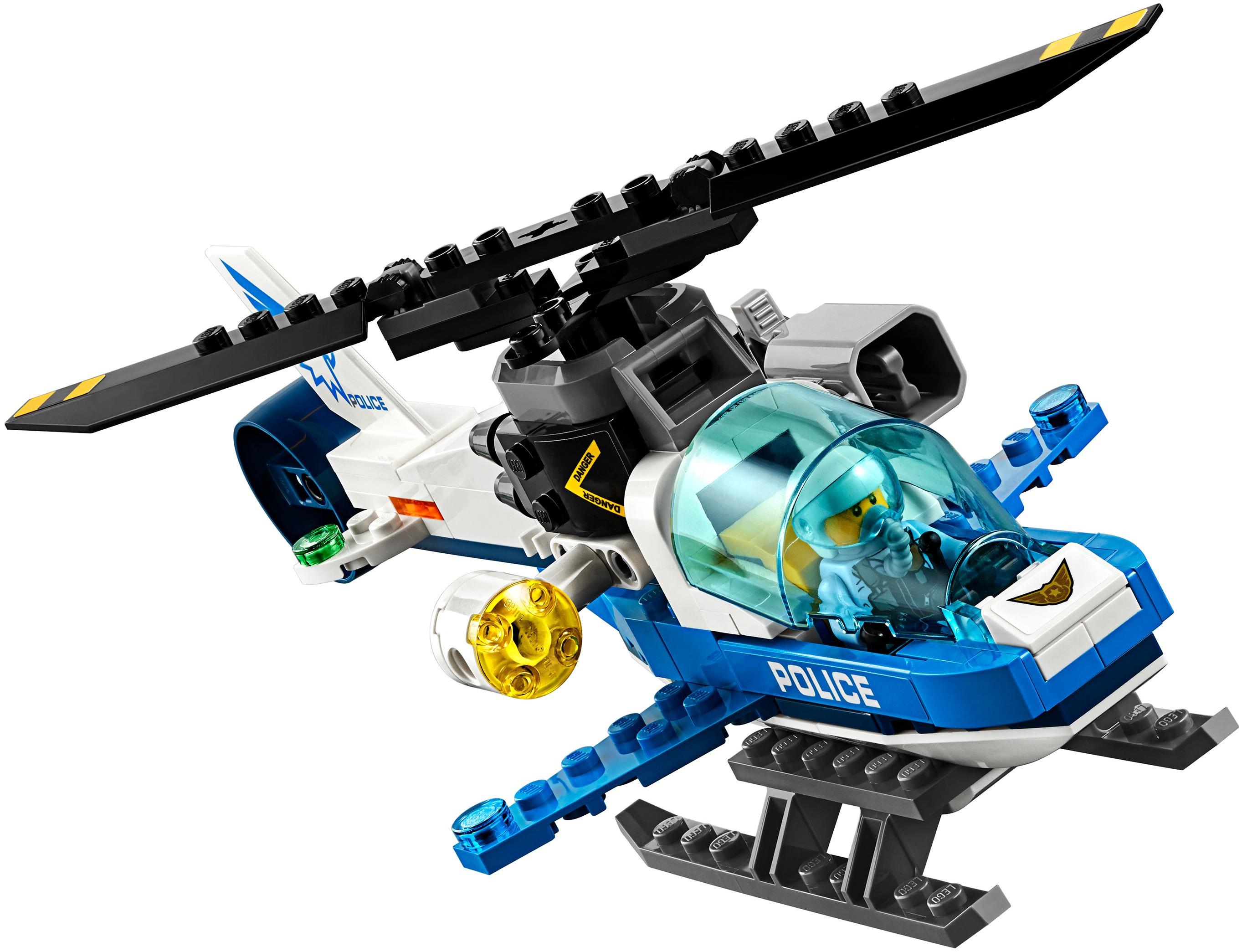 There are two weapons mounted on either side of the cockpit. One side has a yellow searchlight that can be hinged up and down. The other side has a light grey net shooter.

The net shooter is the newer style of LEGO net shooter, introduced in 2018. I am pleased that it is molded in light grey here, as it is a much more normal color than the previous color (yellow). It has a caution sticker stuck to the side. You can basically stuff the net piece into the net shooter, then press the dark grey plunger at the end to fire the net. It fires it with a fair bit of force and works pretty well, though unfortunately you cannot control the direction of the net.

On the whole, this set is unremarkable all around. The helicopter build is pretty ugly, the drone is oversized and not too good-looking, and the crook minifigure is boring. The gold fireman statue is pretty cool and the Sky Police officer looks nice, but those are not huge draws as the Sky Police officer appears in other sets and the statue is simply a small part of the set. The playability is admittedly not bad, as the multiple builds allow fairly interactive play and there is a small cops and robbers narrative built into the set (with a modernized, drone twist). As for the price – I think it’s pretty reasonable in UK, Europe, Australia, and New Zealand etc, but the U.S. price is unusually high and is not justified. I would absolutely not spend $29.99 USD on this set, especially when there are many more better sets available at this price point. All things considered, I’d say this set is pretty forgettable.

Big thank you for reading! Let me know your thoughts in the comments below, and be sure to tell me if you agree or disagree with my review!