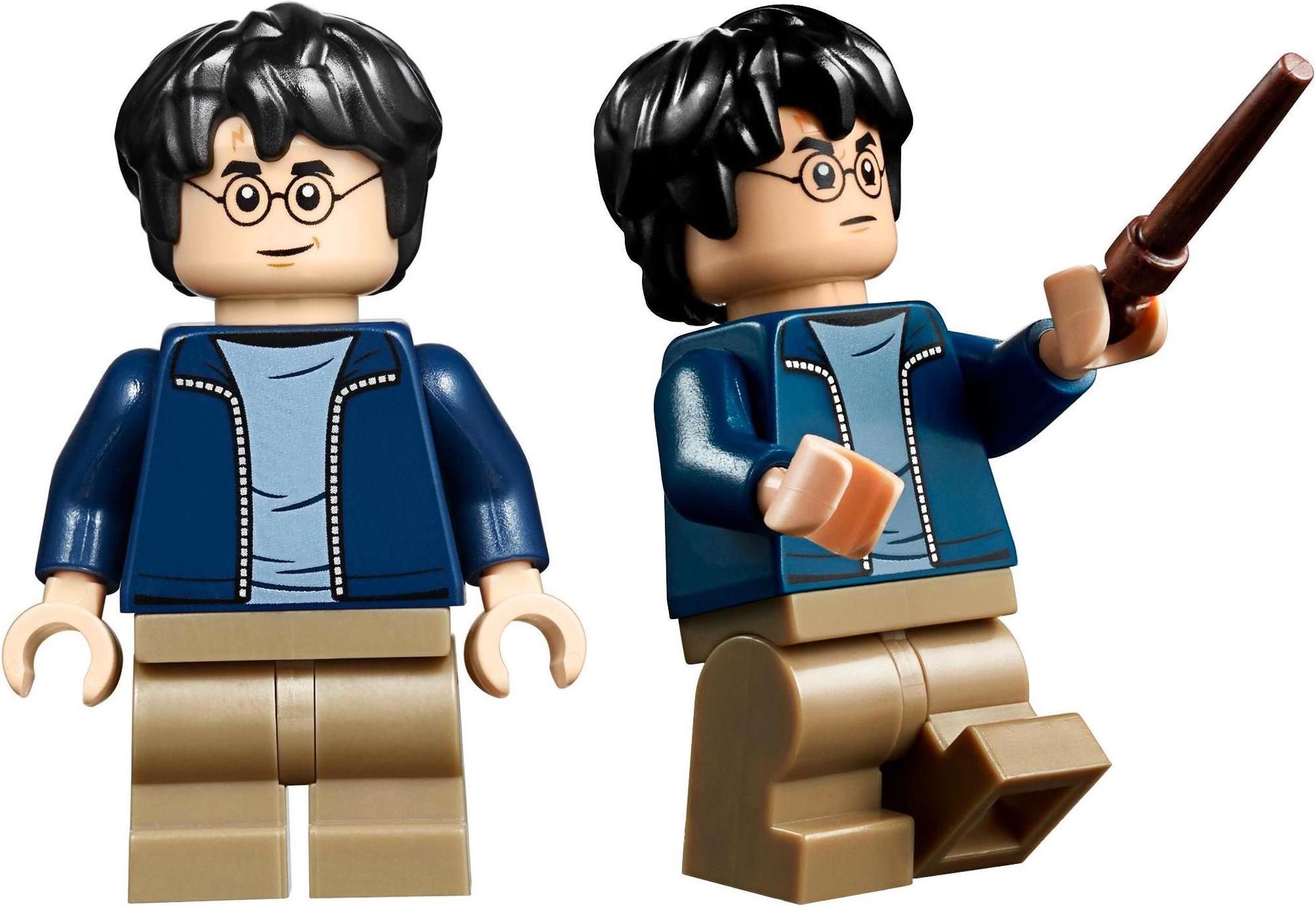 The first minifigure in the set is the protagonist, Harry Potter himself. This minifigure has a new design but is not exclusive. He has the same black hairpiece introduced in 2018, but has a new double-sided head with smiling and angry expressions. His torso depicts a dark blue zippered jacket over a light blue shirt, and despite its simplicity it looks good. Harry has dark tan mid-legs, which are relatively new but are becoming more popular. These legs are shorter than regular minifigure legs but can still be posed and let minifigures sit down. Harry’s accessory is a brown wand. 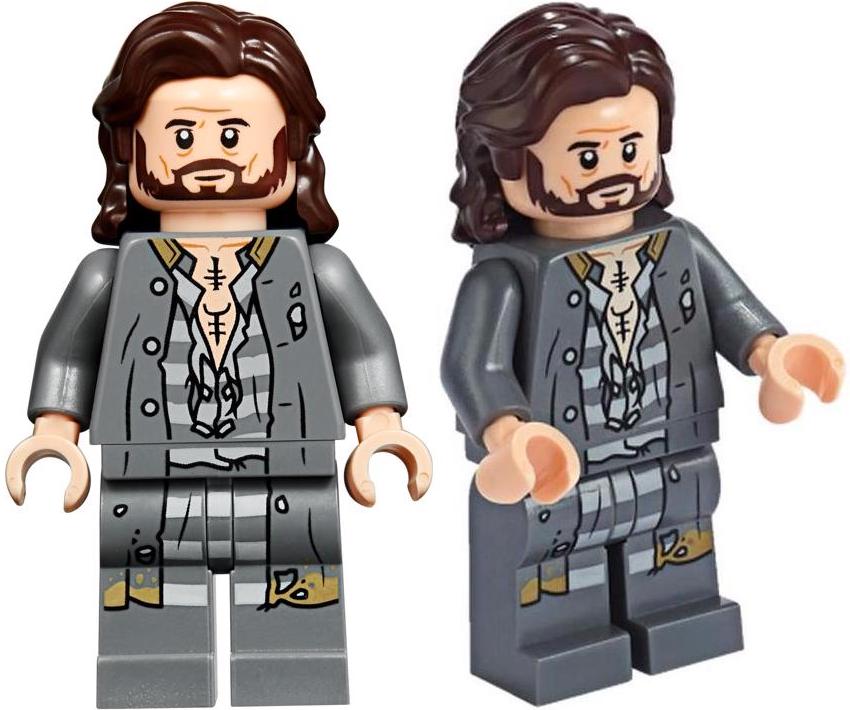 The second minifigure in the set is Sirius Black. This character has not appeared in LEGO form since 2010 and his return here is therefore welcome for LEGO Harry Potter fans. His hairpiece is new, as it is a brown recolor of the Old Luke Skywalker hair from 75200 Ahch-To Island Training. This hairpiece is great to get as it also works very well on the Infinity War Bucky Barnes minifigure from 5005256 Infinity War Bricktober Pack. Sirius Black’s torso and legs are printed with tattered prison outfits, though the flesh tone printing on the torso is a fair bit lighter than official images show. Still, this is a pretty good minifigure overall. LEGO Sirius Black does not have any accessories. 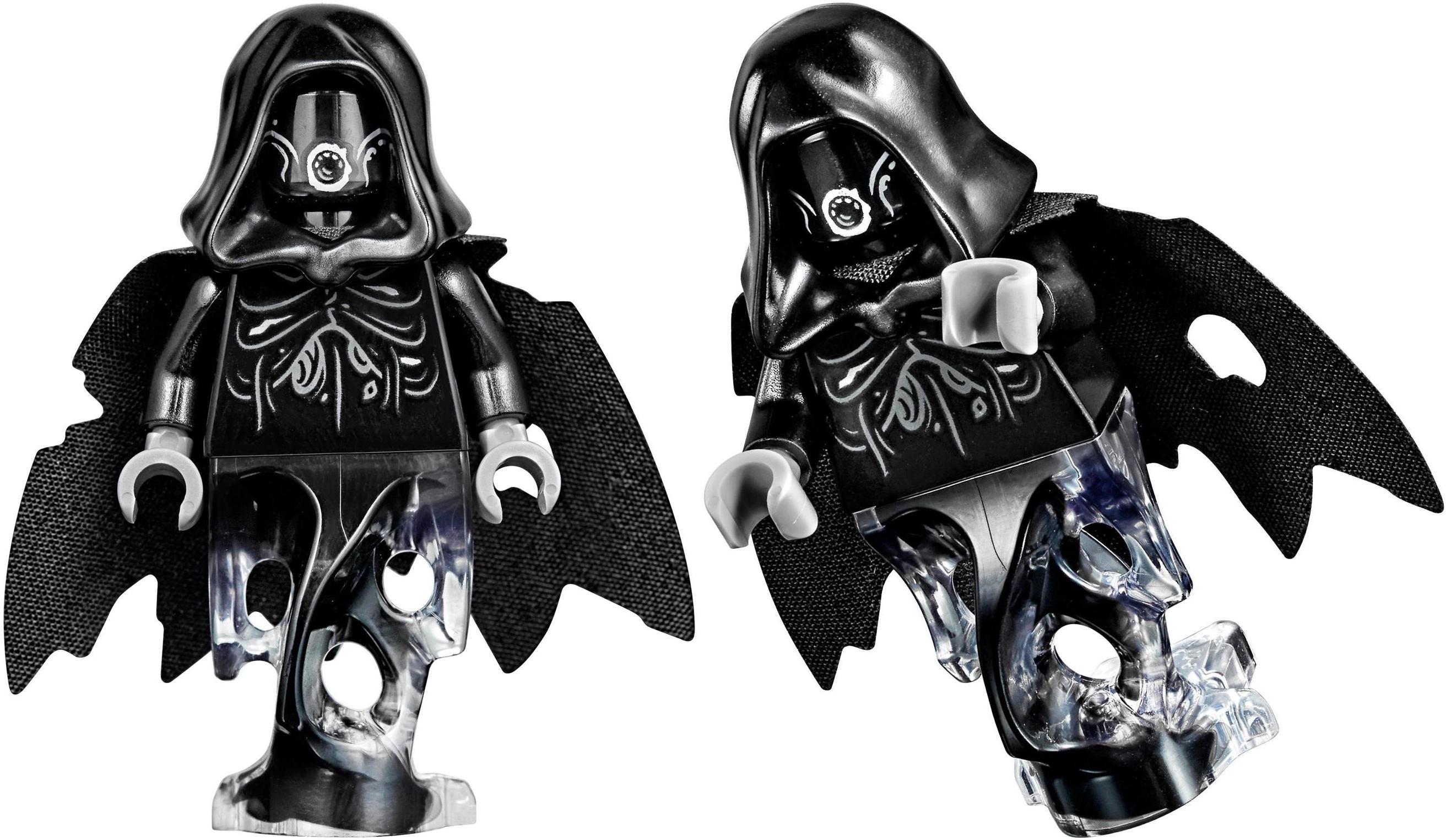 The final minifigures are a pair of Dementors. Two of these minifigures are included and they previously appeared in 75955 Hogwarts Express. They have black hoods and tattered capes. Their torsos and heads are printed with creepy ghostly details, and they have dual-molded black/clear ghost “leg” pieces. They look fantastic and will no doubt be very useful for creating custom LEGO Vormir Red Skull minifigures – another bonus for LEGO Marvel fans! 🙂

On the whole, the minifigure selection in the set is already pretty good. Sirius Black and Harry Potter are good minifigures, and it’s always good to get more Dementors. However, there’s one more awesome bonus in the set. 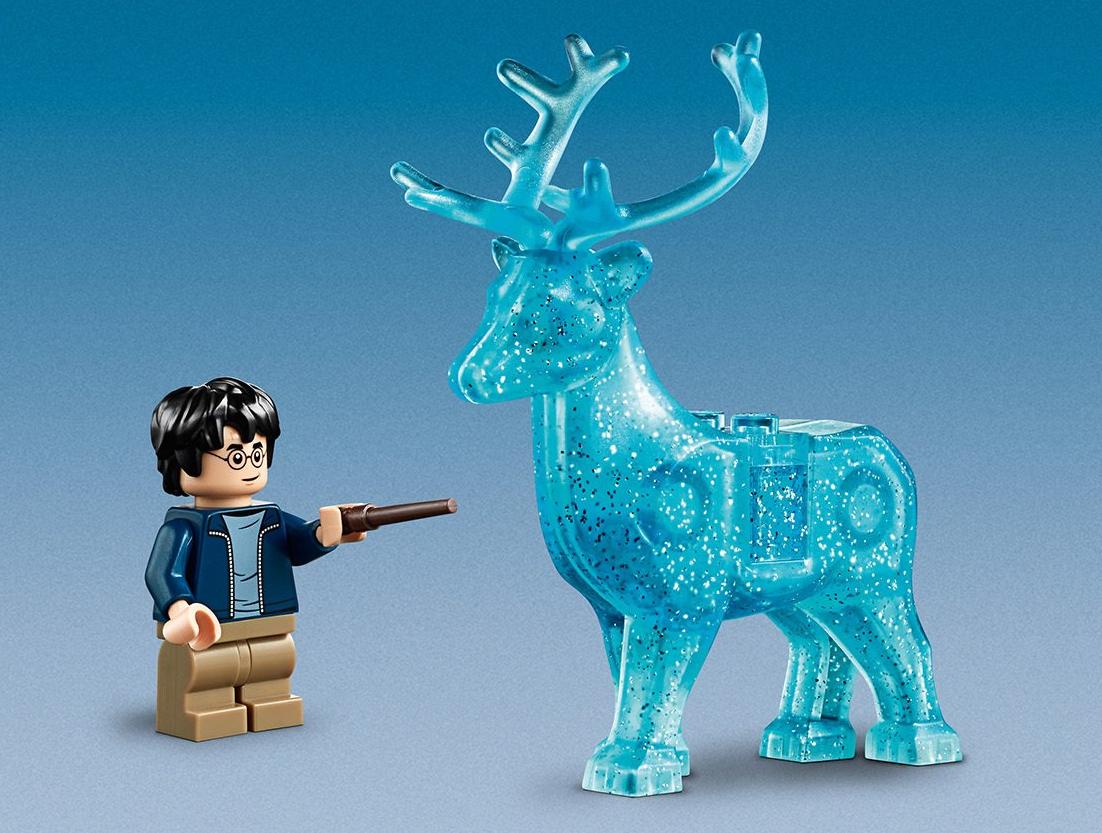 The set includes a translucent light blue glitter stag, which future Harry Potter summons to protect his past self. This is a brand new molded piece created for this set. 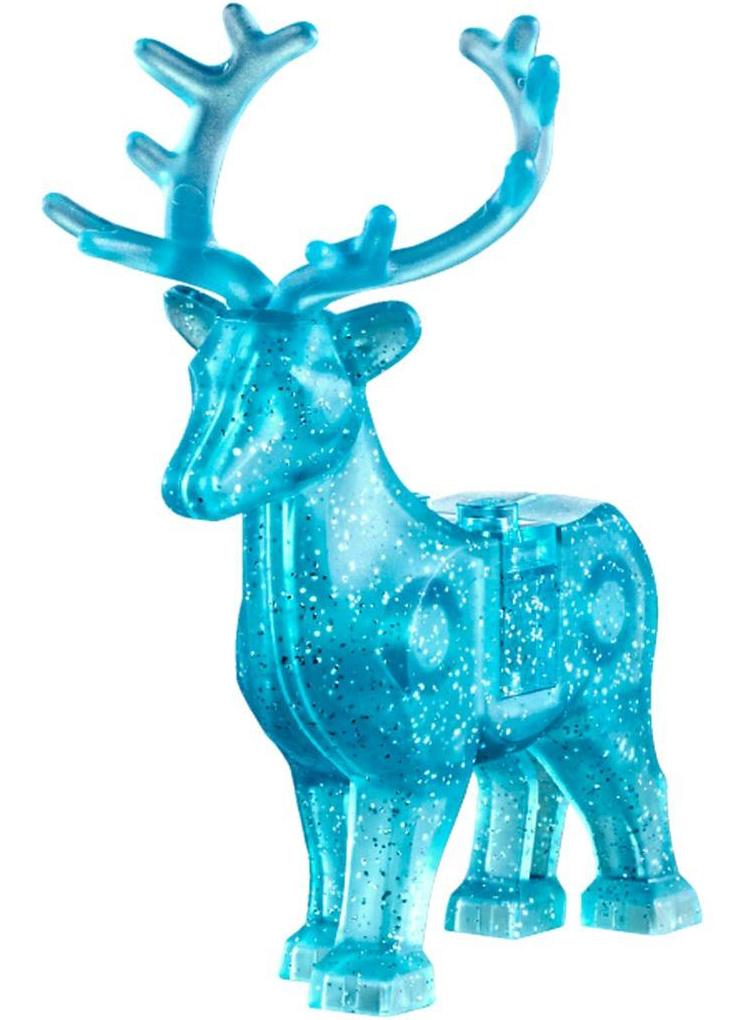 The stag is fully molded in translucent light blue and has glitter molded into it, which looks fabulous. The horns are a separate material and are fused into the head; they are made from a rubbery material that is flexible. 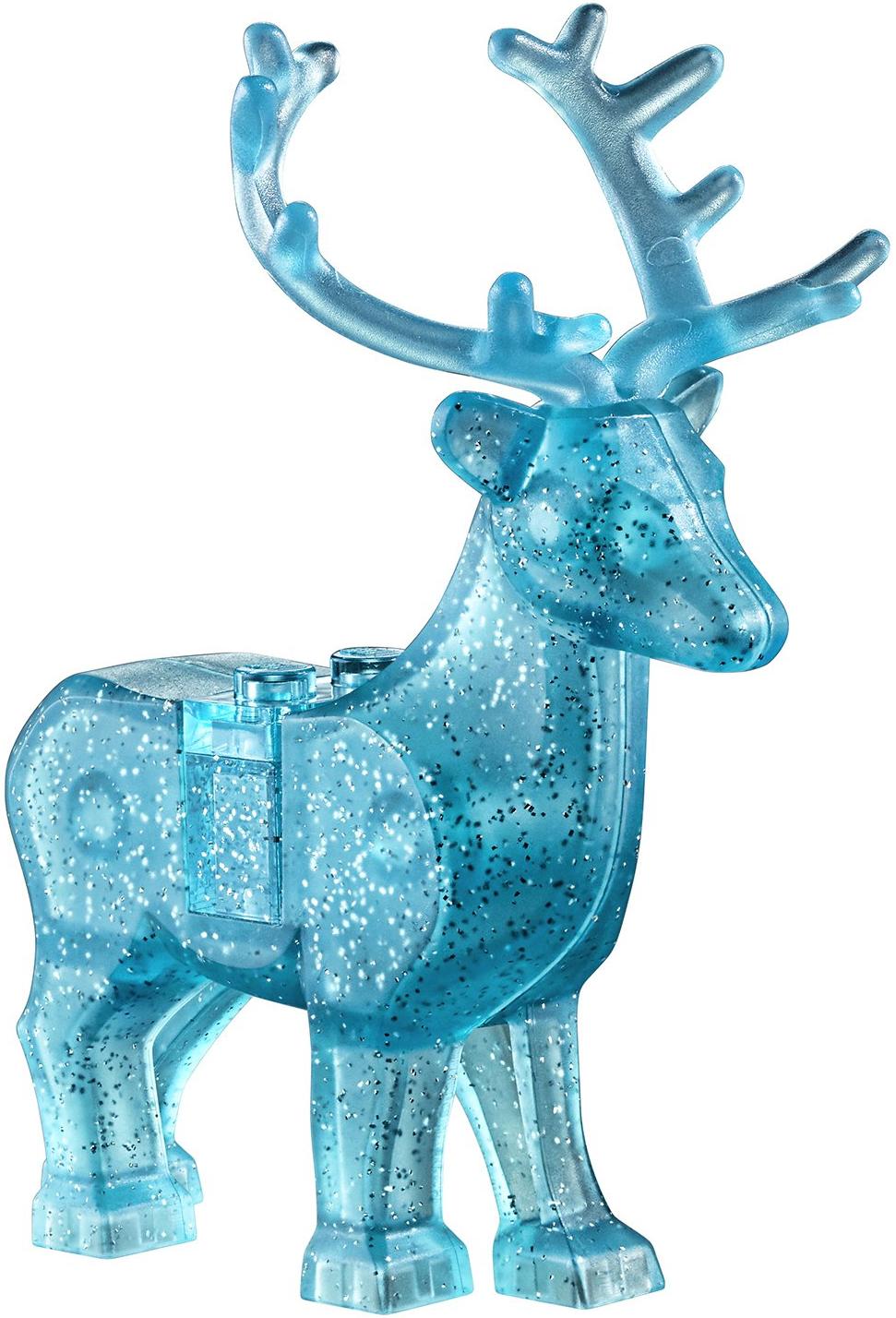 The stag looks fabulous, and I like how the coloring and glitter makes it look like it’s glowing. There’s a 1×2 translucent blue glitter brick and a 1×2 translucent blue plate placed inside the body, you can remove this to let a minifigure ride the stag. You can also make someone sit on top of the stag by using the two exposed studs. 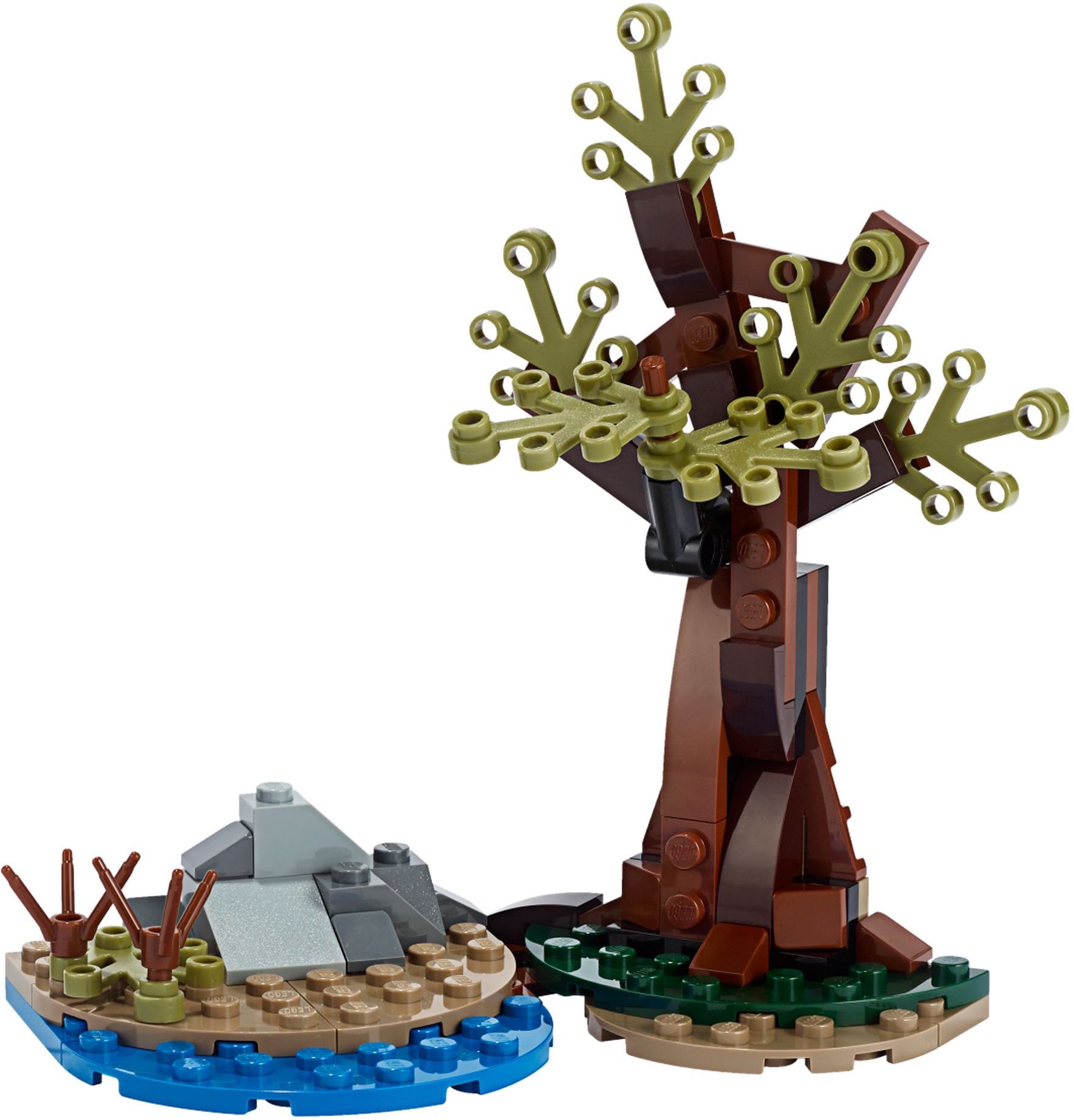 Now on to the builds of the set. There are two builds in the set, the larger of which is this one. This depicts a small shoreline with a tree on the side. 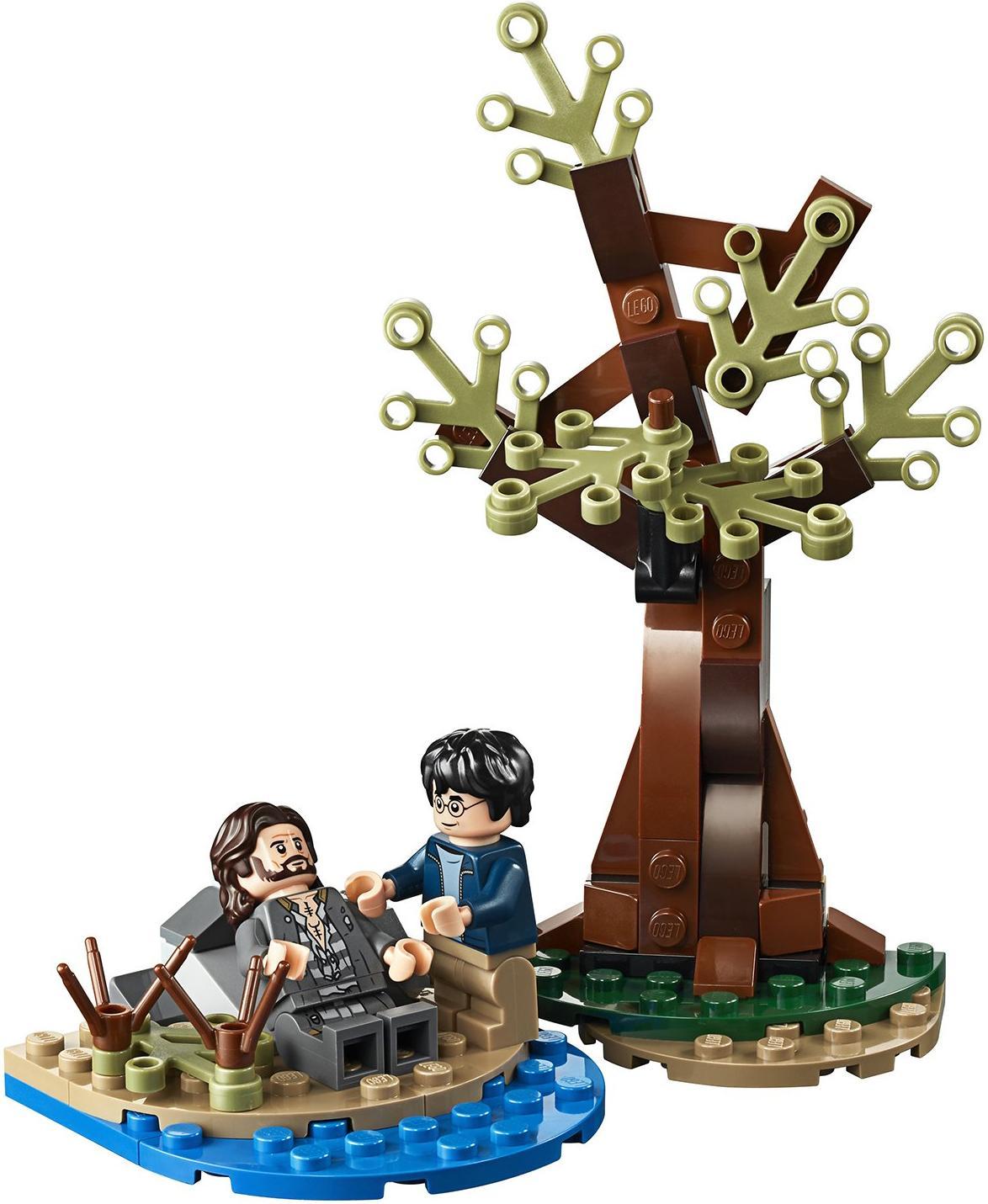 You can place Sirius Black and Harry Potter here to recreate the movie scene. It works fine but the shoreline is admittedly a little cramp for two minifigures. There are some blue plates to represent water and there are some brown plant pieces and rocks for added scenery. 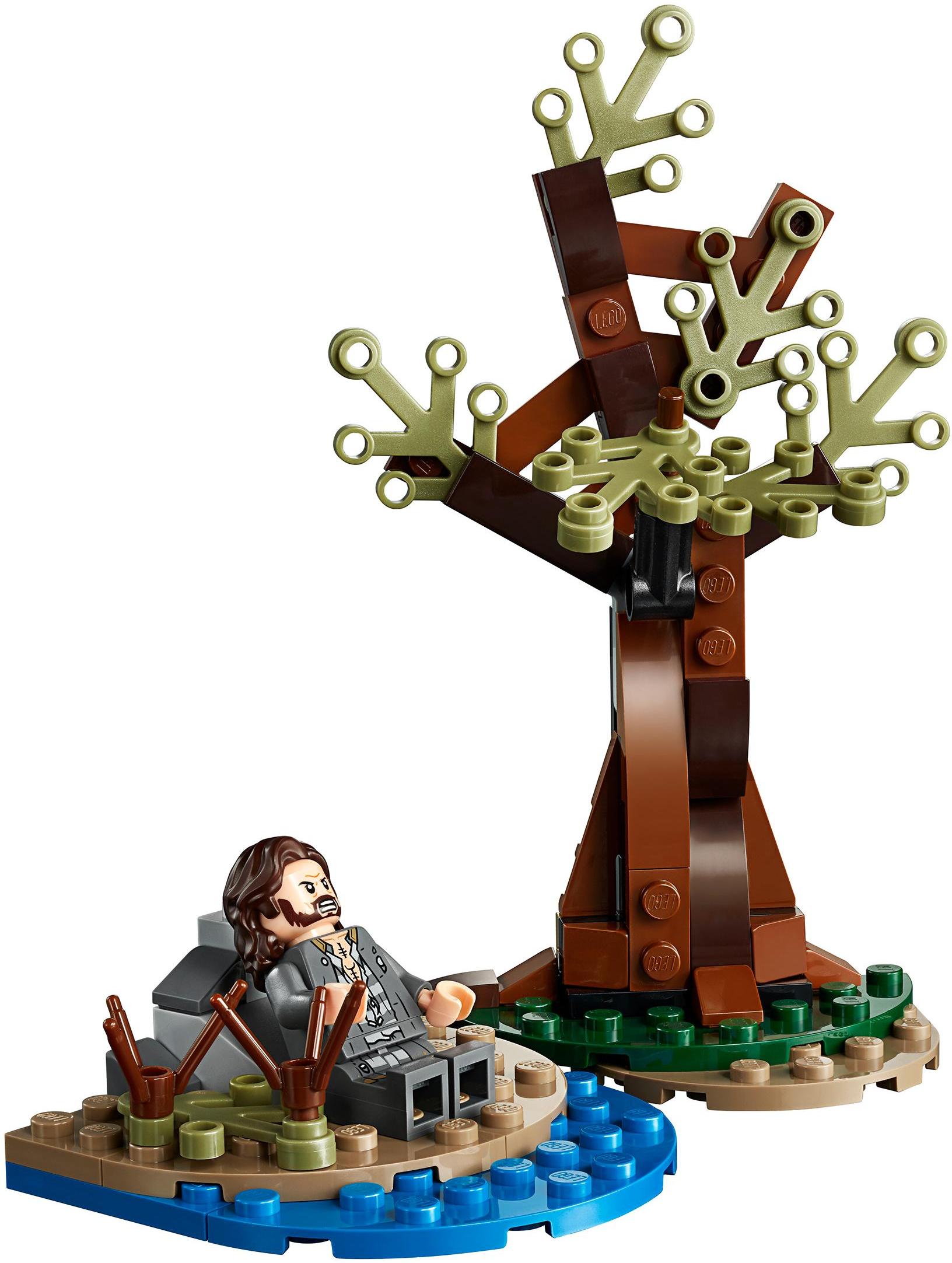 The tree itself is built in a pretty clever way. It is fully brick-built from top to bottom and is built almost entirely sideways, creating a very interesting look. Unfortunately, it looks pretty bad from the back and there are some Technic pieces exposed on the back; and the tree looks fantastic from the front. Several olive green leaves are used for the leaves at the top of the tree. 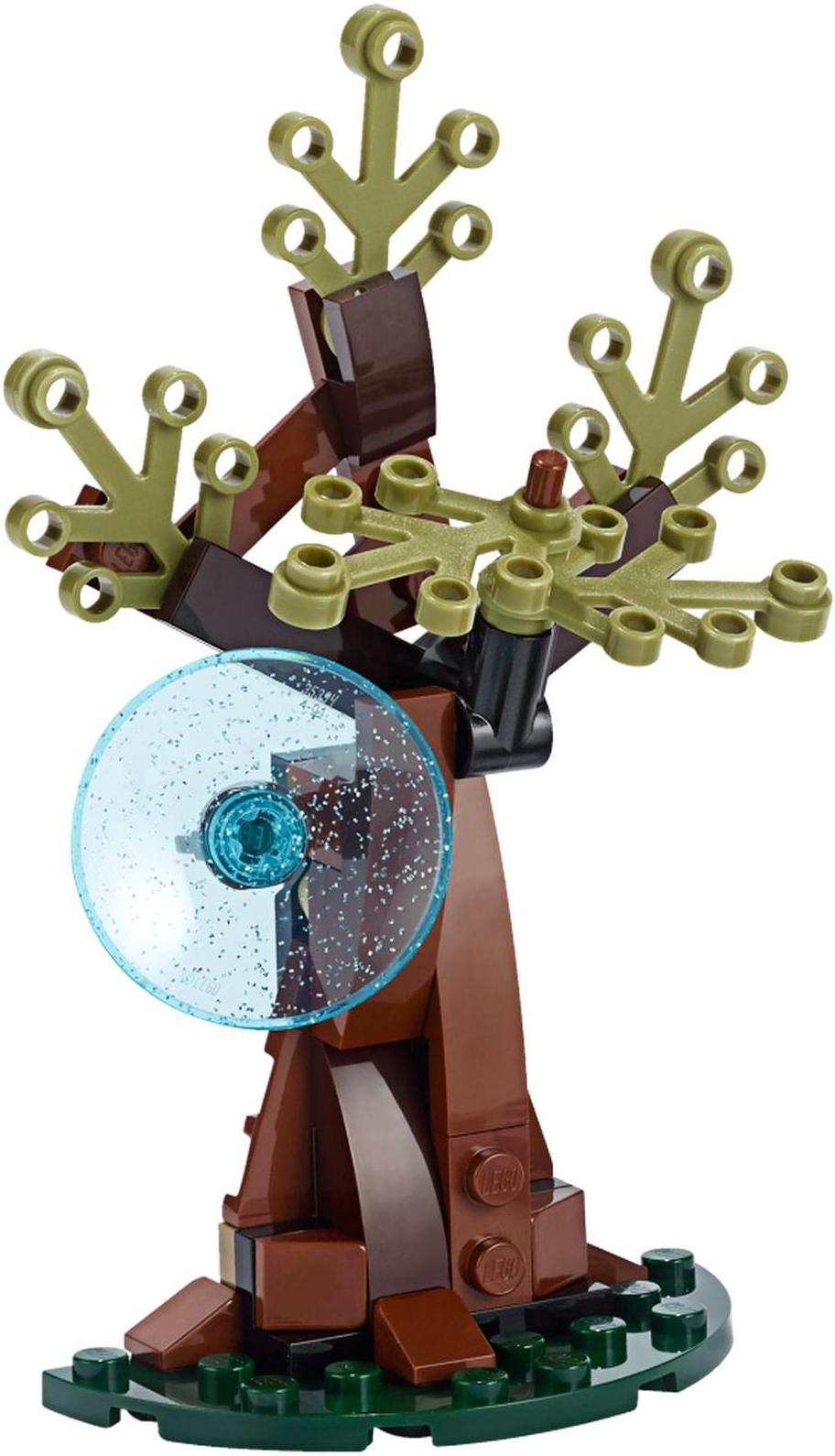 The other build in the set is just another tree. This tree is built in a similar way to the other tree and it looks rather similar, but it has a dark green base. Once again, it is built with a studs on the side design, and uses a couple of Technic pieces for mounting the leaves at an interesting angle. 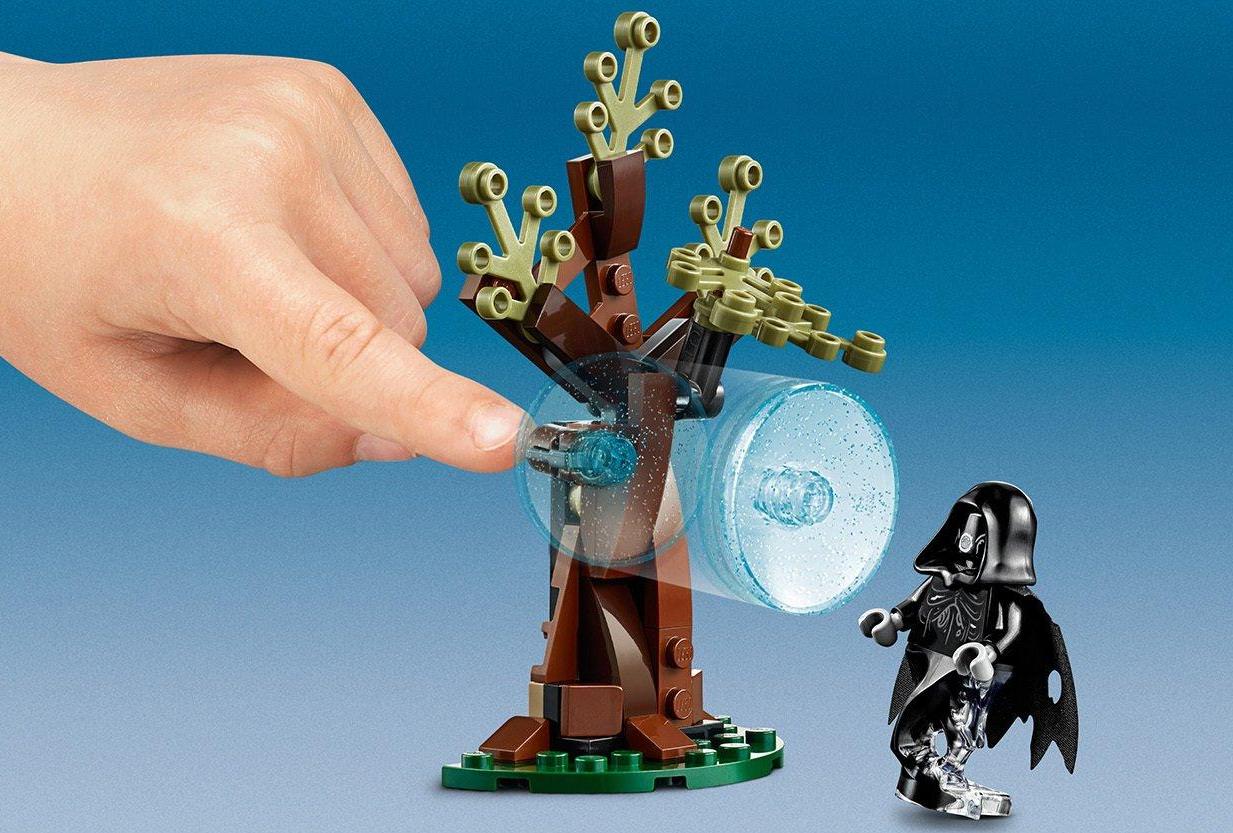 There is a play feature with this tree – a brown stud shooter is mounted on the side of the tree and it has a translucent blue glitter 4×4 radar dish. You can fire off the dish by pressing the trigger; this represents Harry Potter’s Patronus spell. 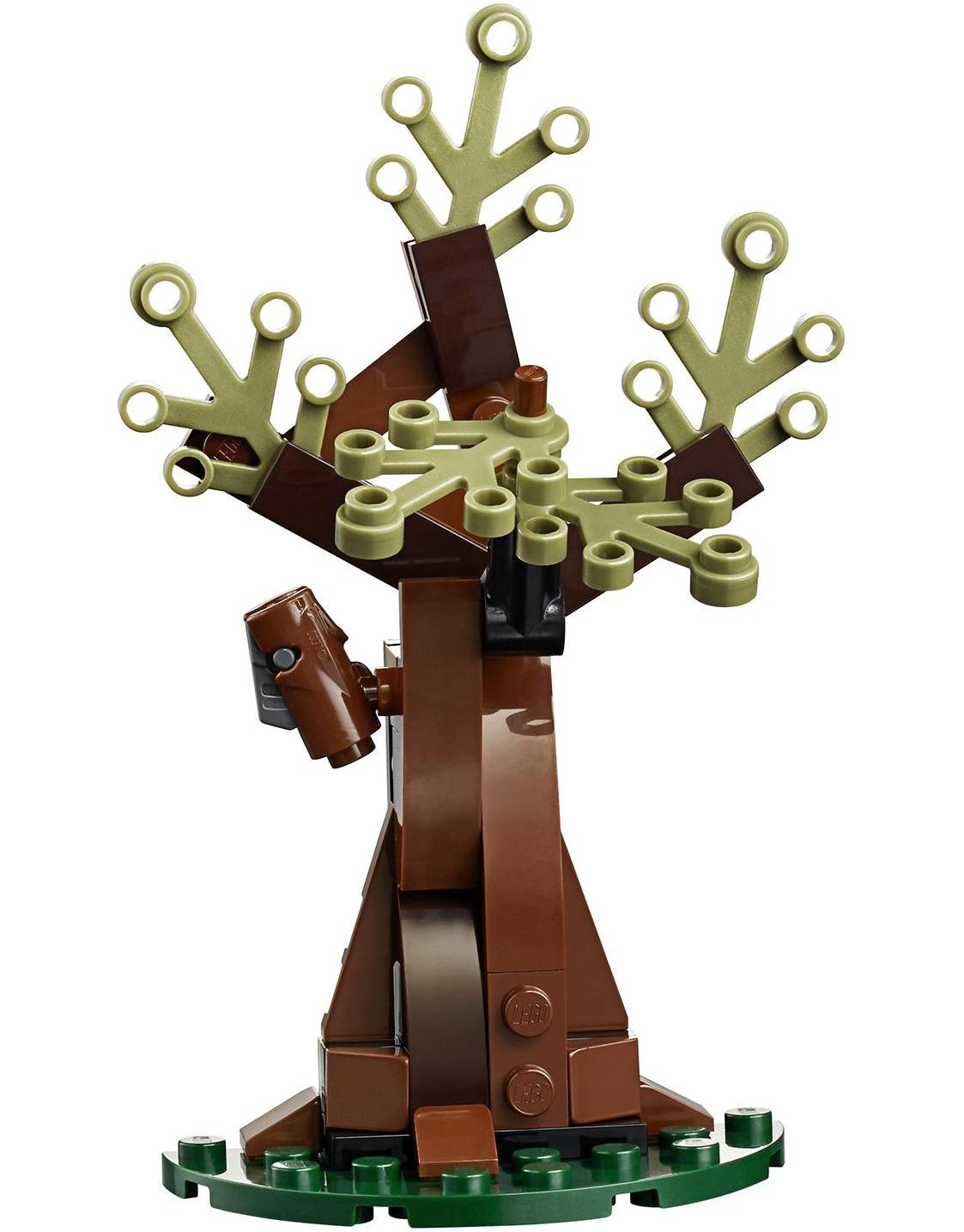 Apart from that, the tree is mostly scenery. Again, it’s pretty flat and ugly from the back (with some red Technic pieces exposed on the back) but it looks great from the front.

On the whole, I think this set is small but impressive! The four minifigures and the patronus stag included are fantastic, and the builds themselves are pretty good as well (as long as they’re viewed from the front). I feel that the price is reasonable, though maybe slightly overpriced in the UK. Playability is a bit lacking but other than that I think the set is good!