Hey everyone! We have some new unexpected LEGO news today – another LEGO Avengers Endgame set has been revealed! This is 76144 Hulk Helicopter Drop, with 482 pieces and a retail price of $59.99 USD. It will be released on November 25, alongside four other rumored LEGO Avengers sets (it is currently unclear if these sets are Endgame-related). The set also comes with a brand new official Pepper Potts Rescue minifigure and a right-handed Stark Gauntlet! Check out a bunch of new official images below. 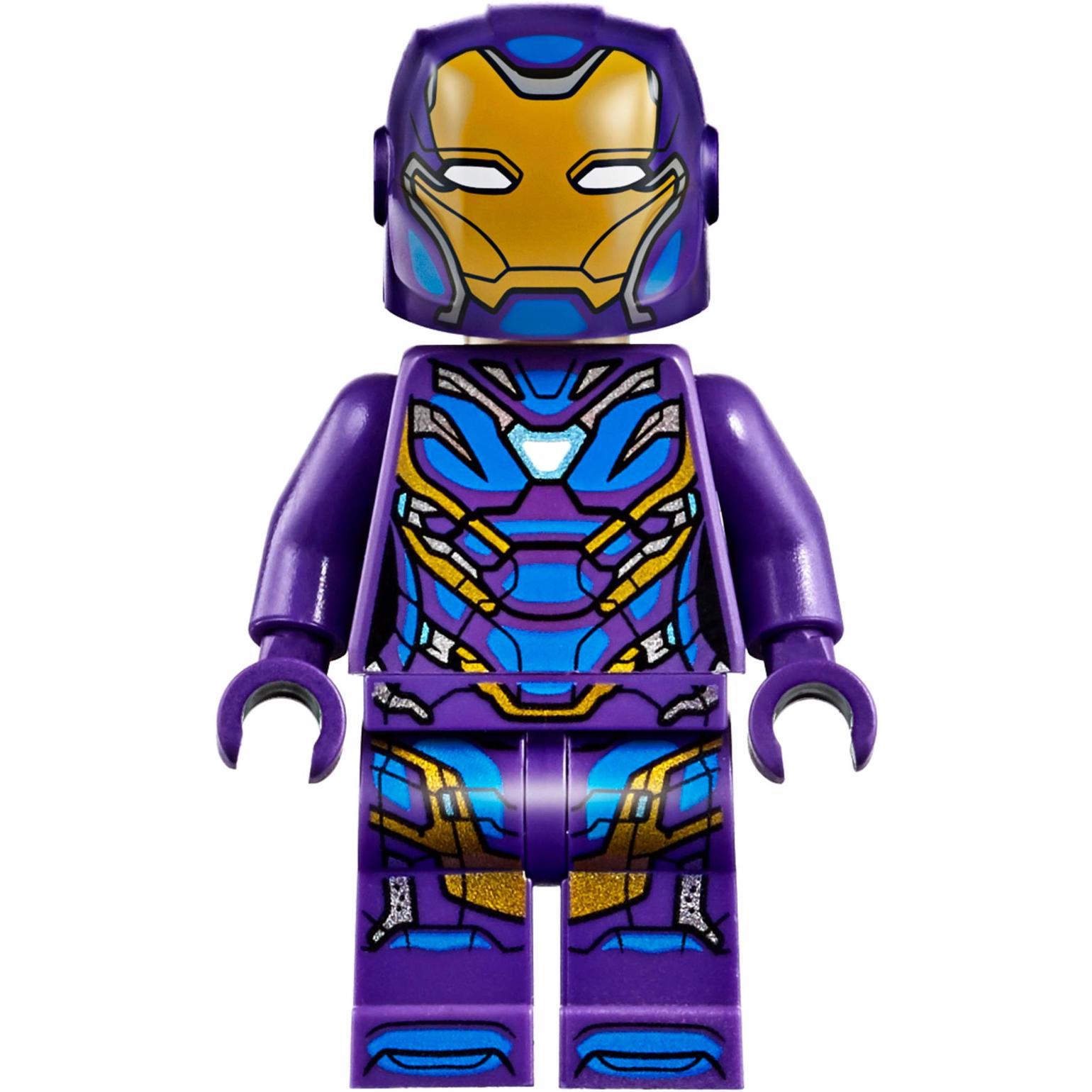 So, here it is: our very own official LEGO Rescue minifigure! Pepper Potts wearing the Rescue armor appeared in the final battle of Avengers Endgame which delighted fans everywhere, but LEGO fans were initially disappointed for never getting an official figure of her character. 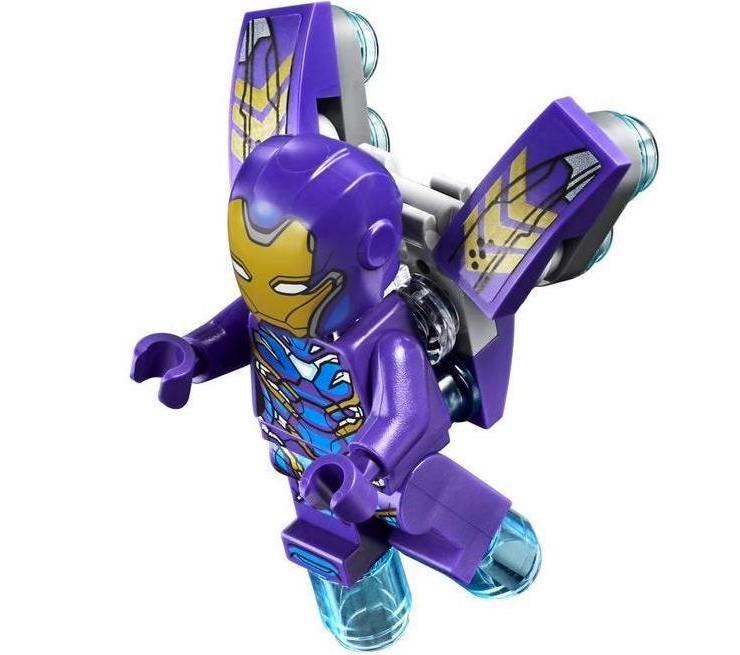 However, those disappointments are no more as we now have an official LEGO minifigure of the Rescue suit! The minifigure has a purple and gold design with some blue highlights and while most agree this color scheme is not entirely accurate, it’s still great to get this minifigure. 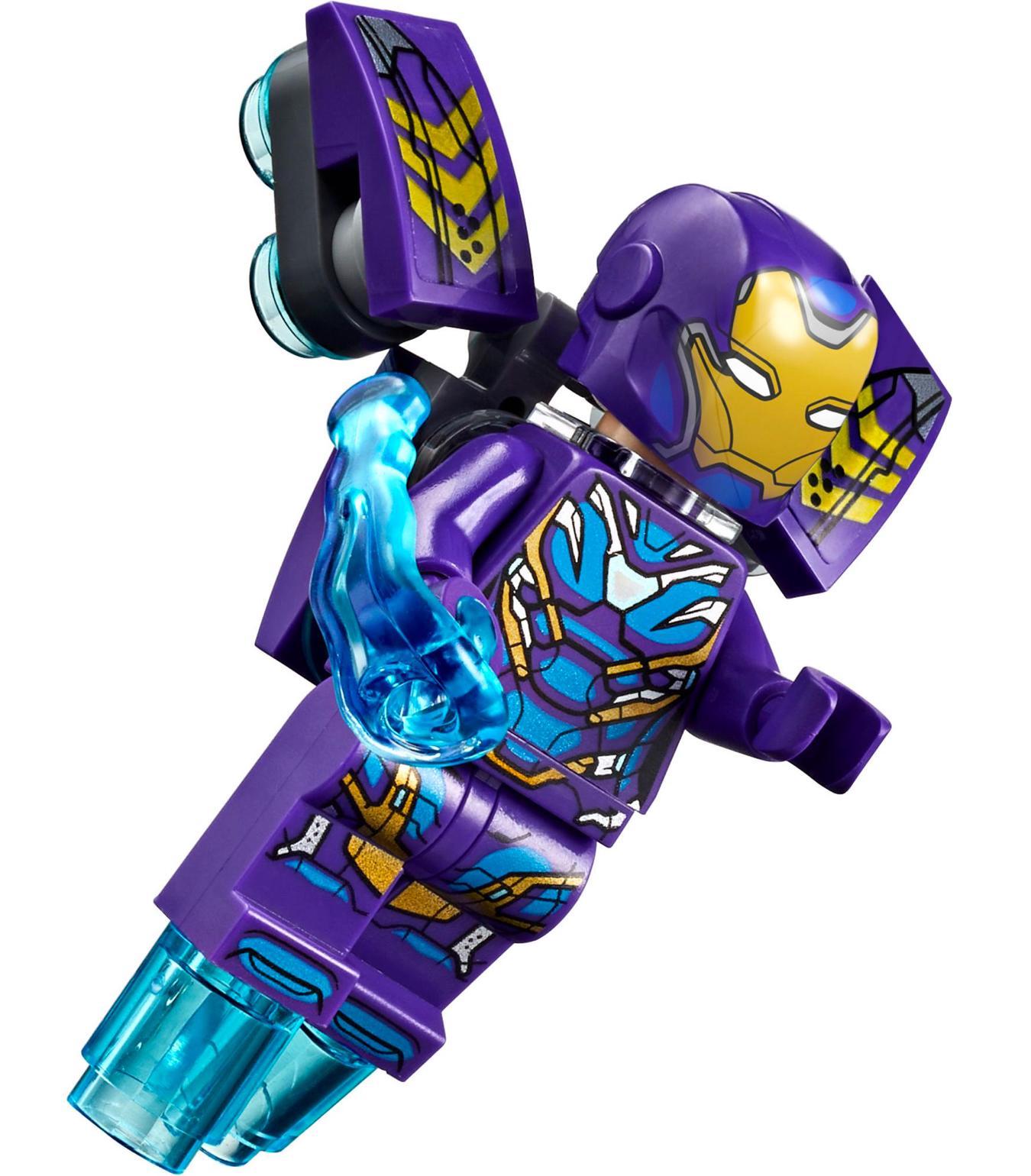 The figure is also remarkably detailed, with helmet, torso, leg, and toe printing. It uses the one-piece Invincible Iron Man helmet mold as opposed to the regular Iron Man helmet, which means the helmet can’t flip open like in the movie. 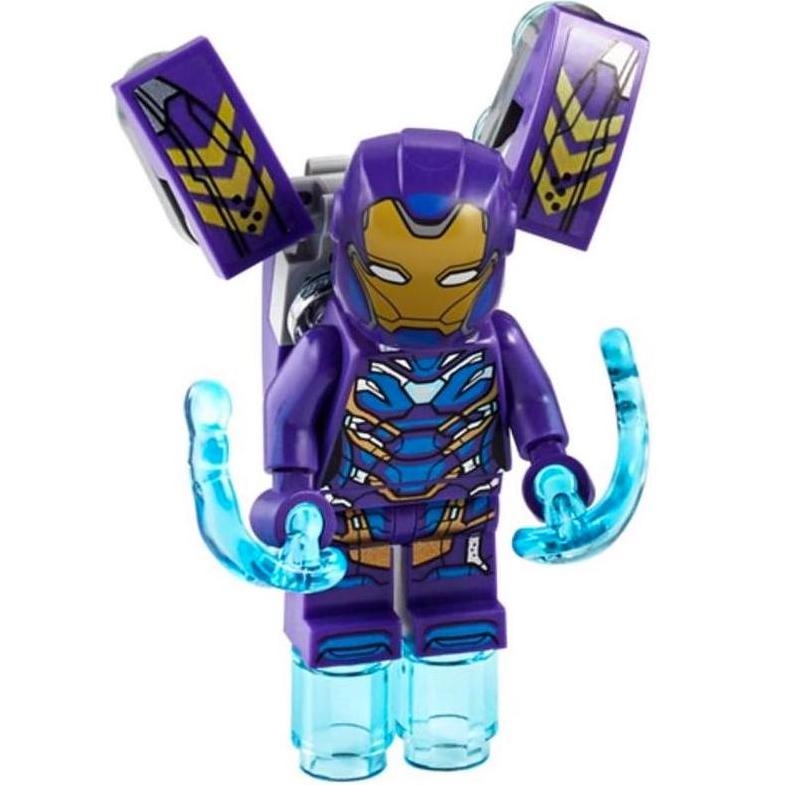 Rescue has a brick-built backpack which gives her two “wings”, similar to the wings on her movie suit. Once again it’s not entirely accurate but it looks good. Rescue is armed with translucent light blue Power Blasts, just like Iron Man in 76131 Avengers Compound Battle. 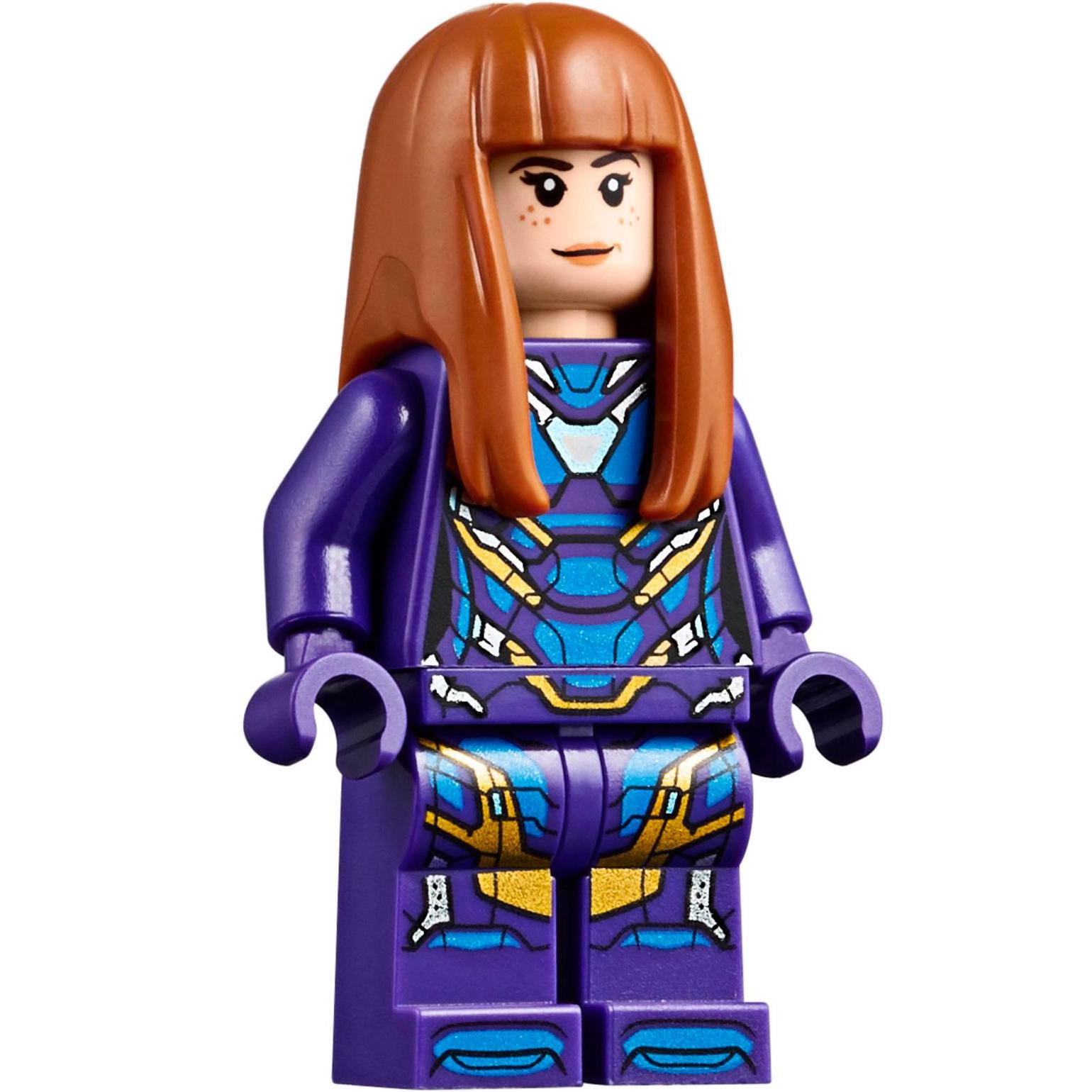 The helmet can be removed and LEGO has included a hairpiece for Pepper Potts. Her head is reused from Hermione in the Harry Potter sets which I feel isn’t perfect – I much preferred the original LEGO Pepper Potts minifigure head from 2013. 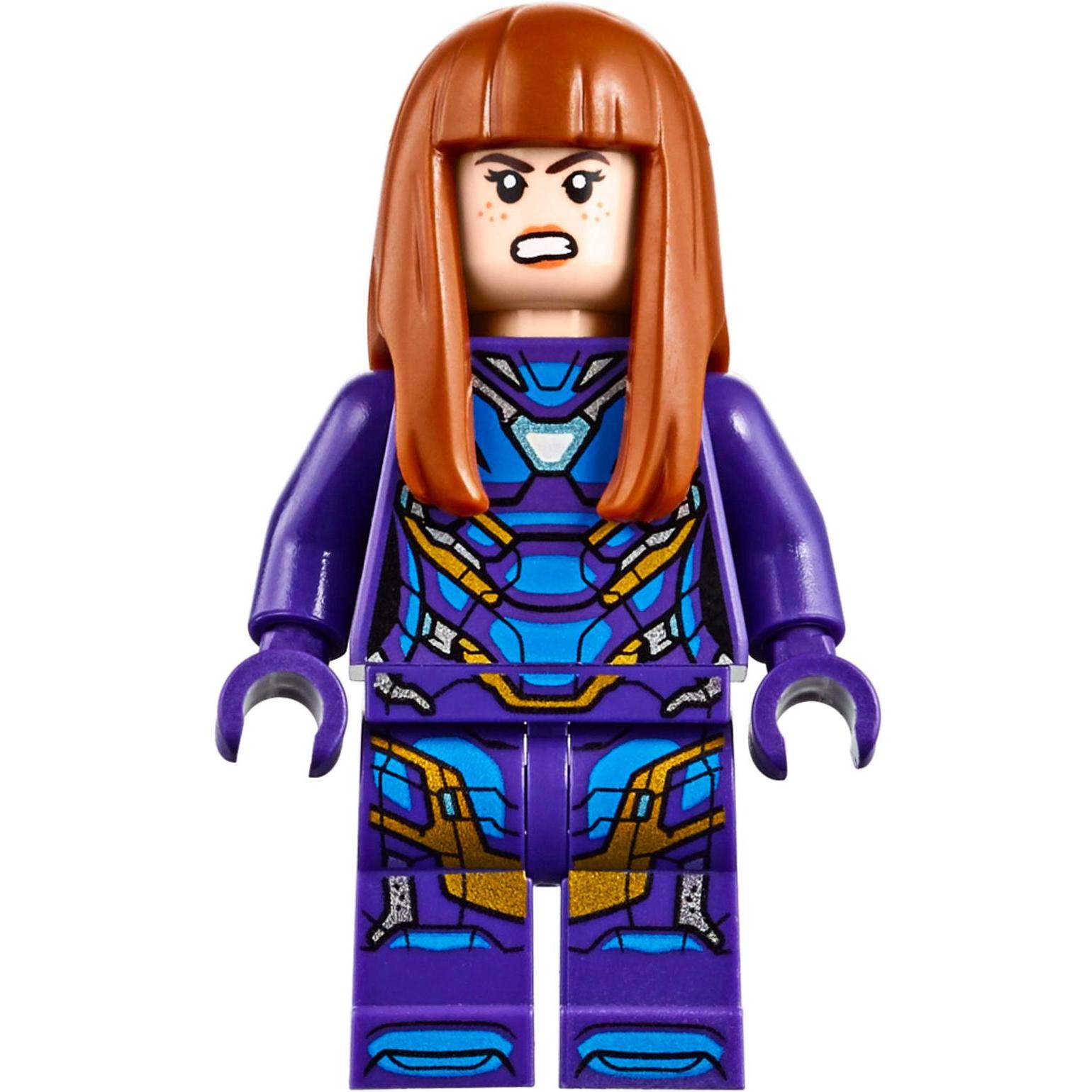 She has an alternate, angrier face. Some have criticised this hairpiece but I think it looks alright and the overall shape is similar to Pepper’s hairstyle in the final battle. 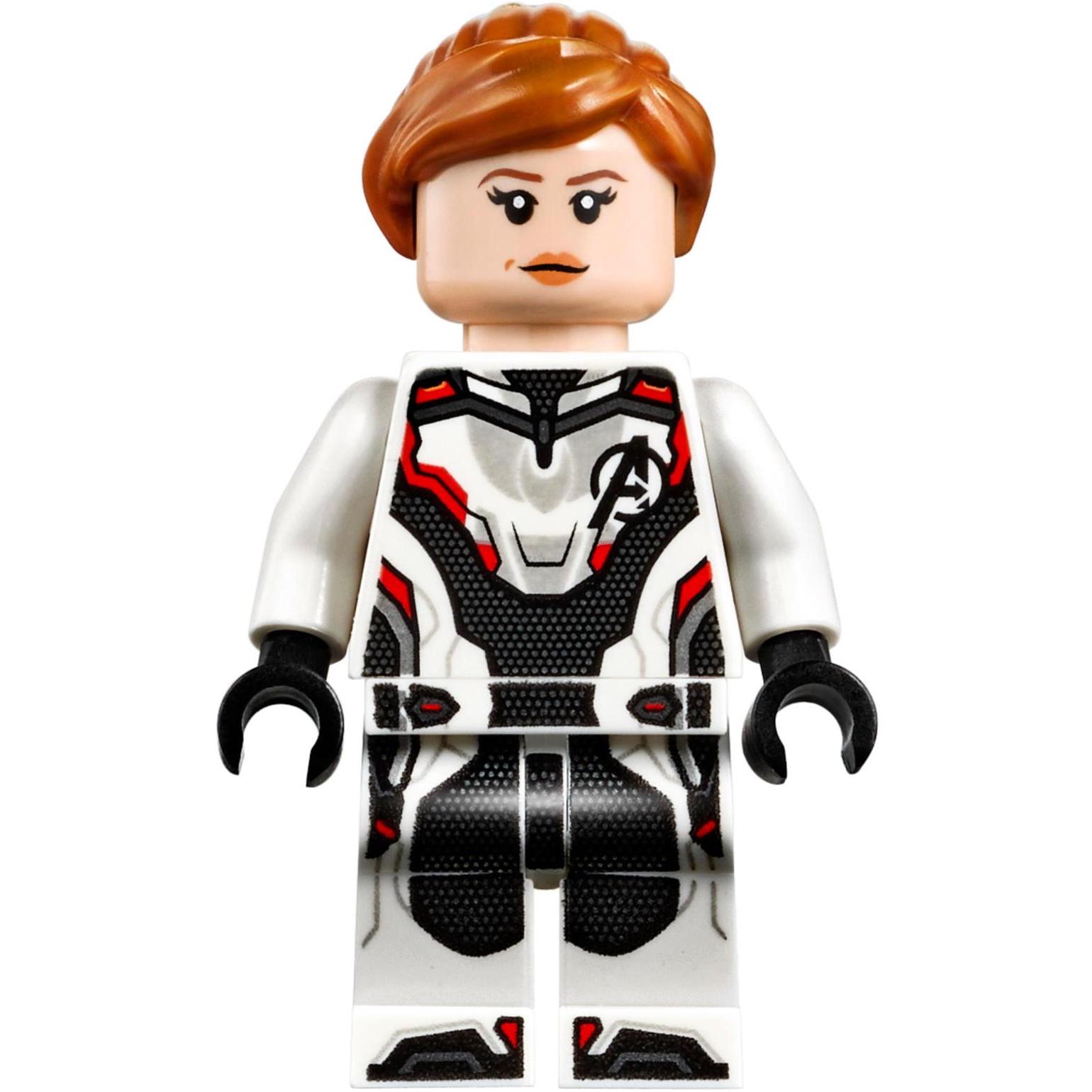 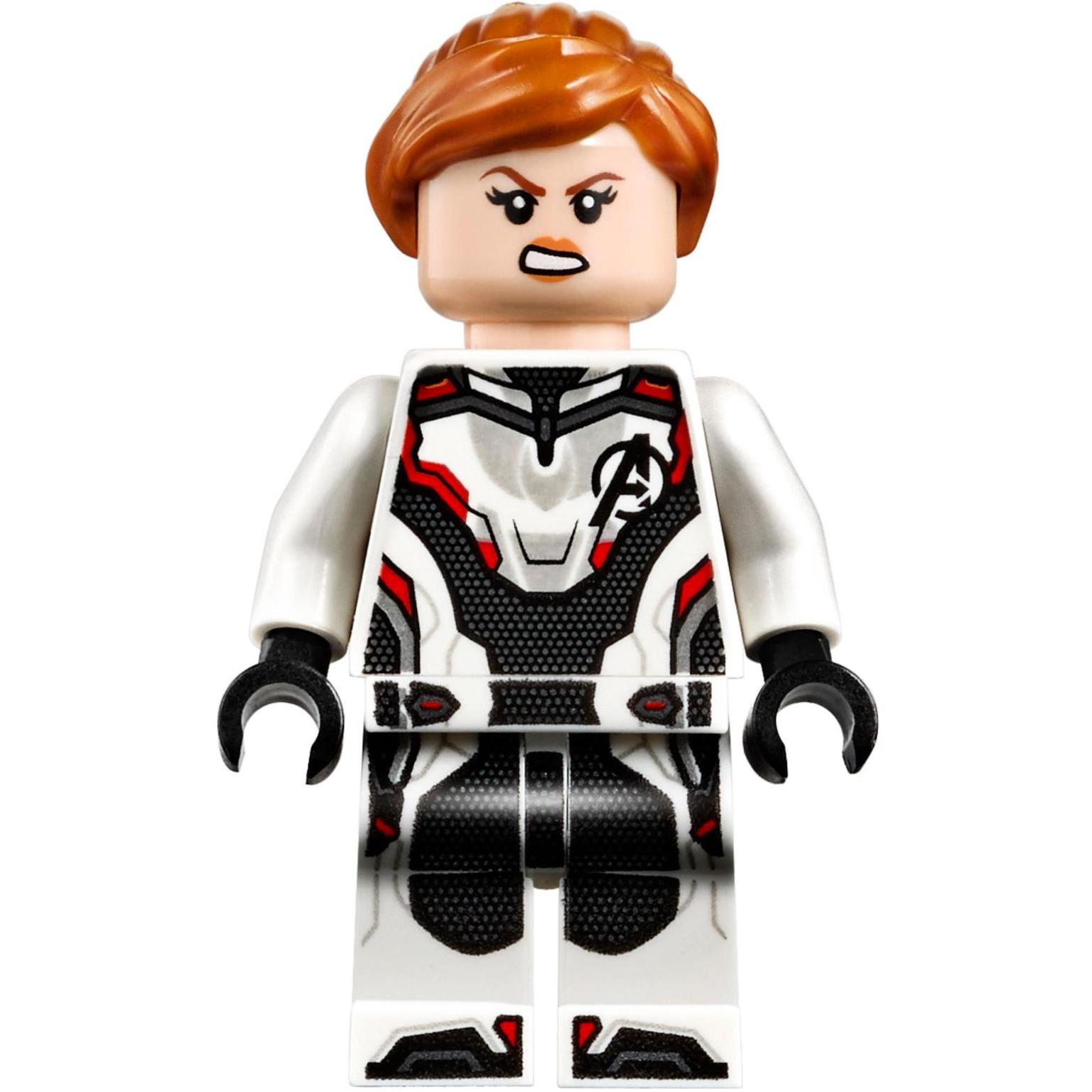 However, some LEGO fans have pointed out that her eyebrow print seems lighter than previous variants, meaning it could possibly be a new print to match her hair color. If this is true, I think it is a total waste of a new print and that would just annoy the heck out of me. I’m still not too sure if it’s a new print or not, though. 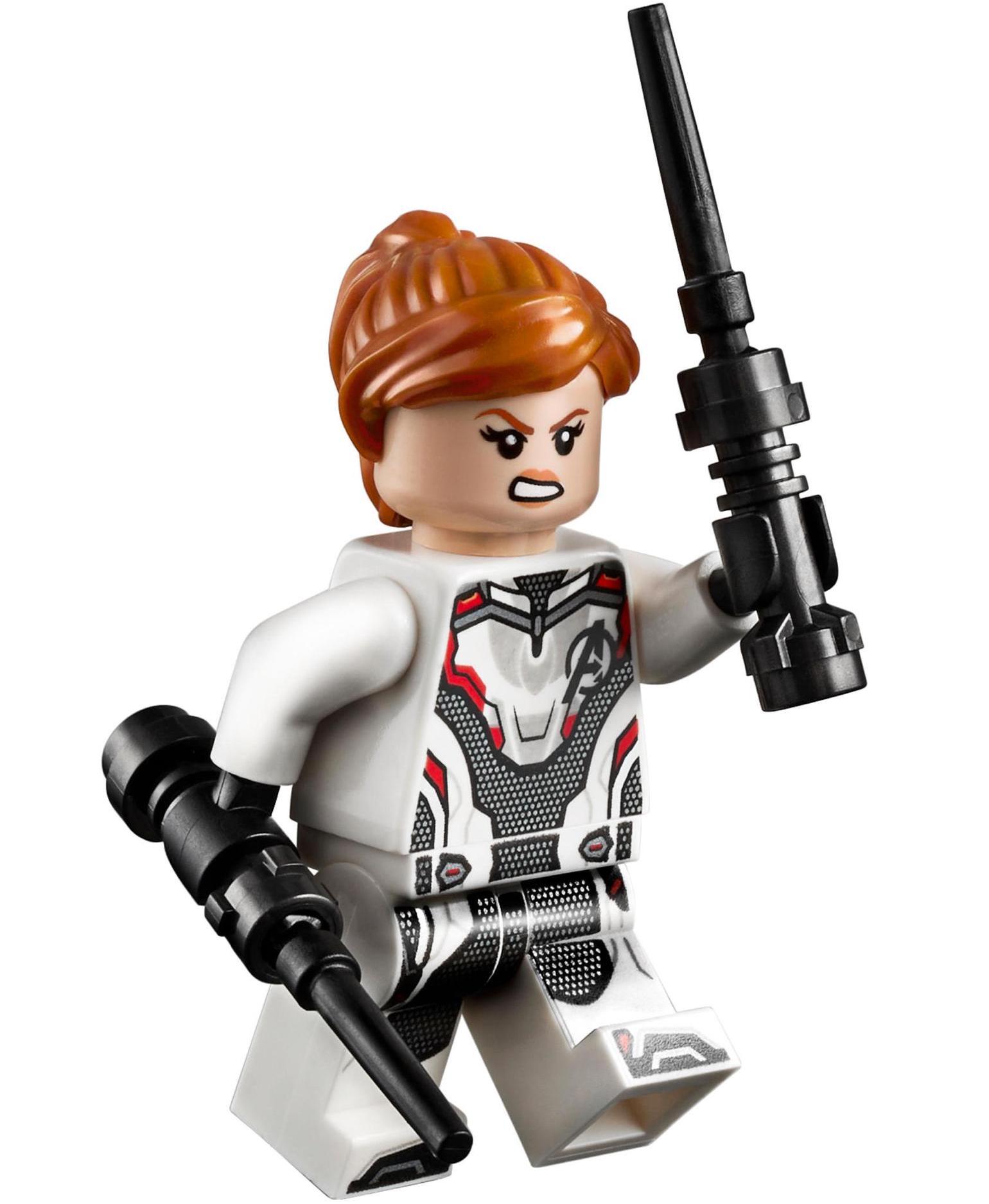 However, there is one improvement to this figure – her batons. LEGO used to give her translucent light blue lightsaber blade pieces which were completely inaccurate. Here, she now has black lightsaber hilts attached to wands, which match the movie batons better. Despite this upgrade, I still find this minifigure unnecessary on the whole. 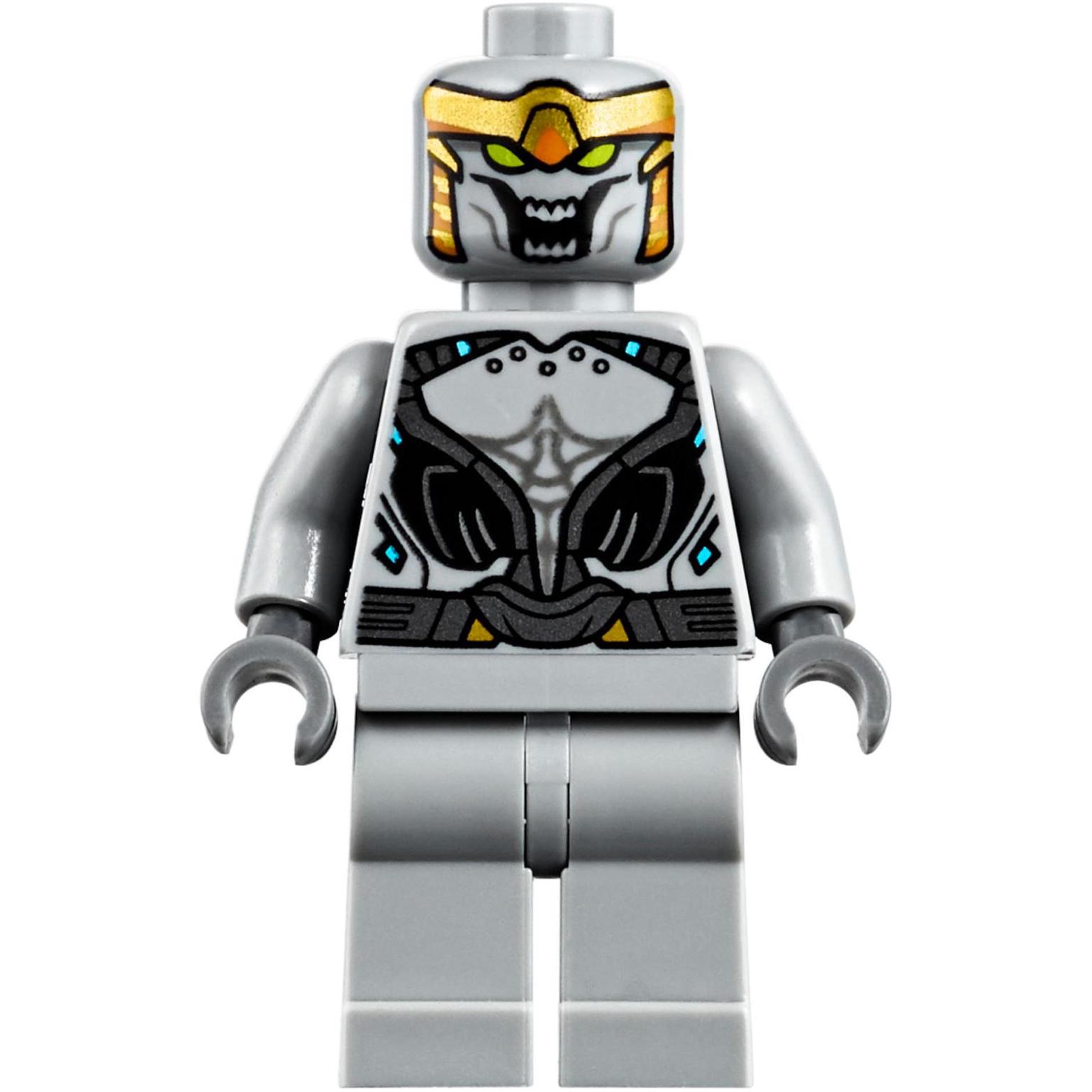 Two Chitauri minifigures are included. Once again, these minifigures are identical to the ones from 76126 Avengers Ultimate Quinjet, with a plain grey color scheme along with torso and head prints. 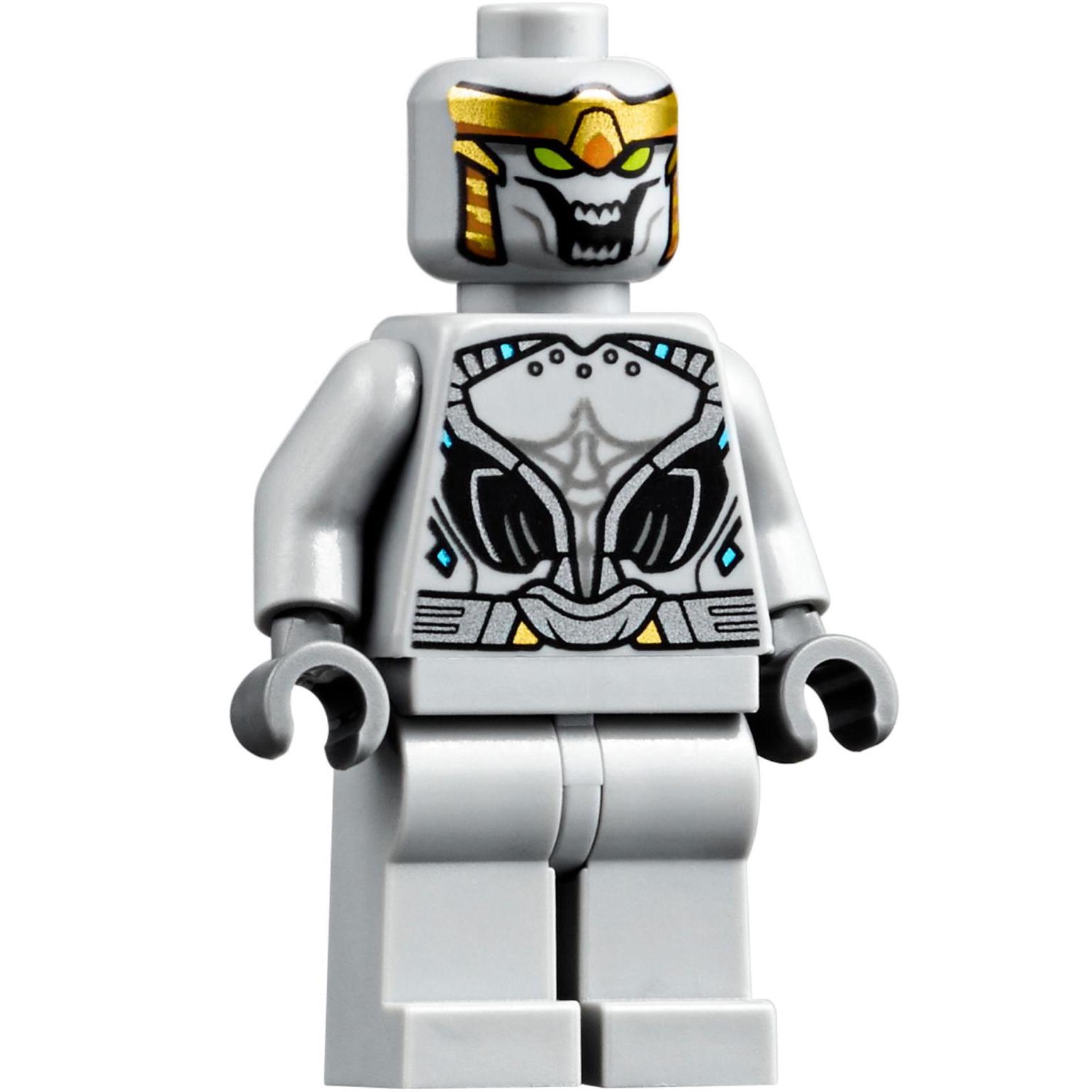 However, these Chitauri minifigures do not come with their golden guns which is disappointing to me as that was my favorite part of those minifigures. 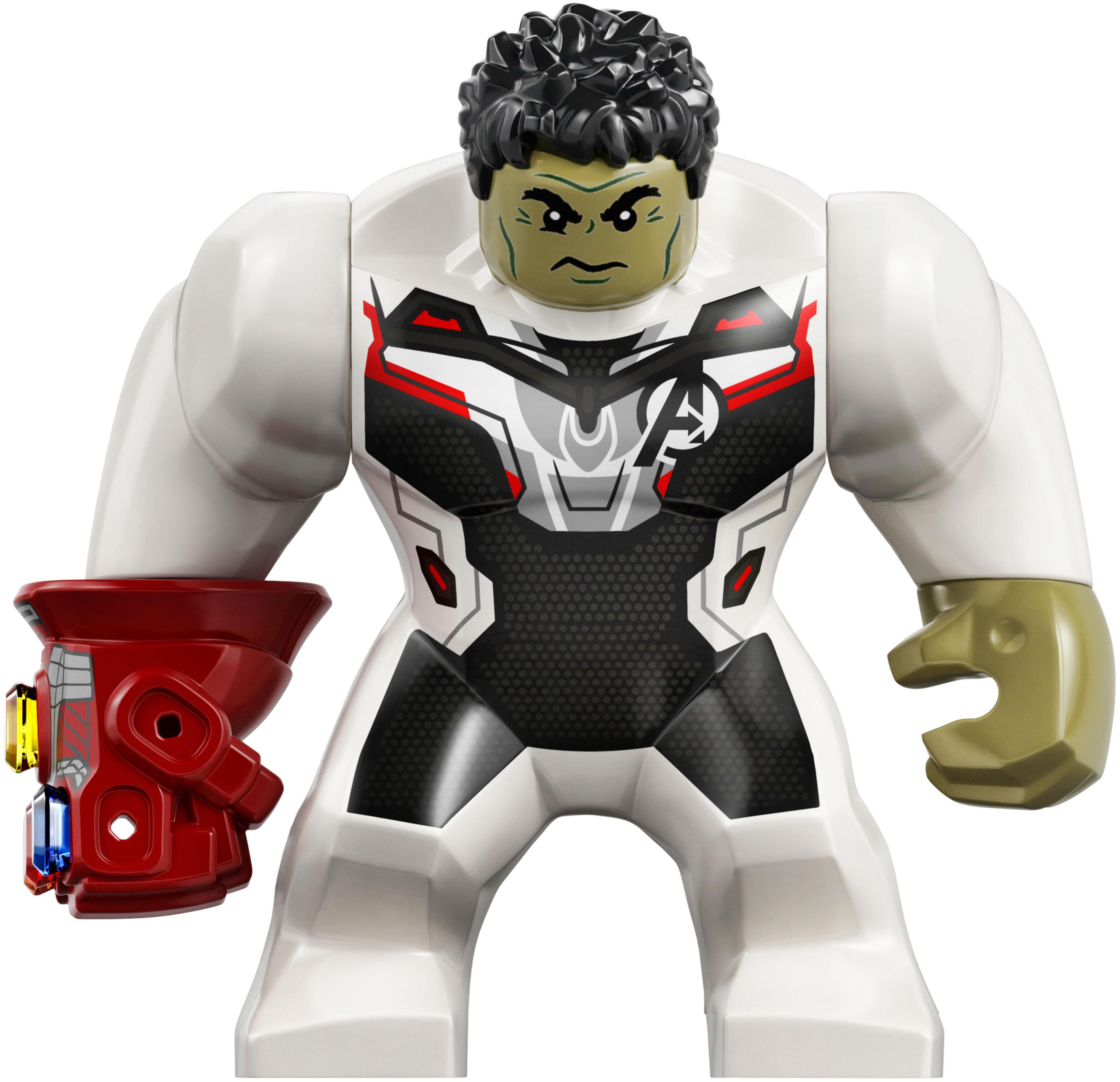 Now, our final minifigure in the set is Professor Hulk himself, armed with none other than the red Stark Gauntlet! 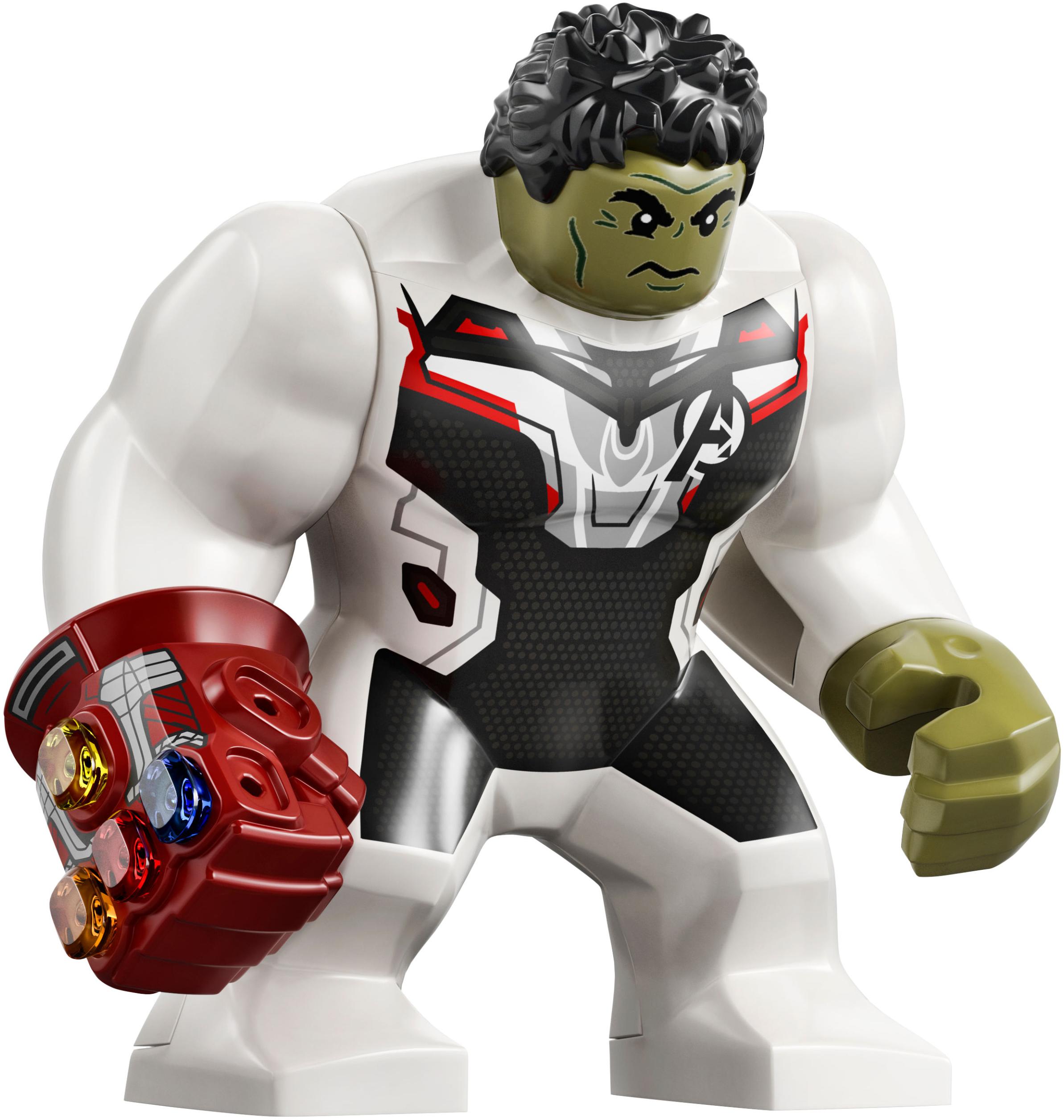 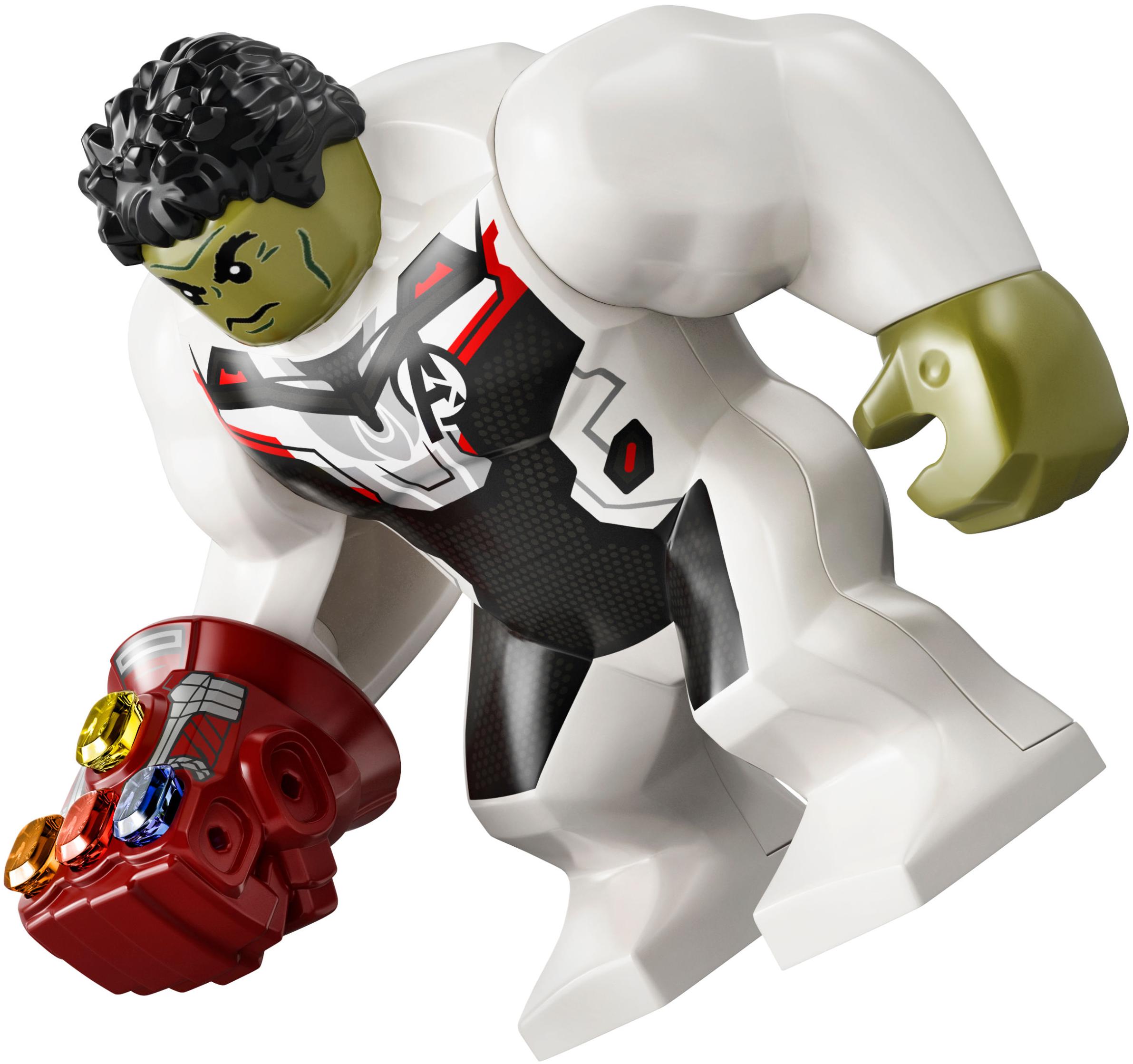 I do feel that the face print for Hulk looks really weird. Something about the furrowed eyebrows and wiggly mouth print just seems off to me when I look at it. I also don’t like how the black print on the legs ends abruptly at the knees, but LEGO has sadly always skimped out on prints for bigfigs. 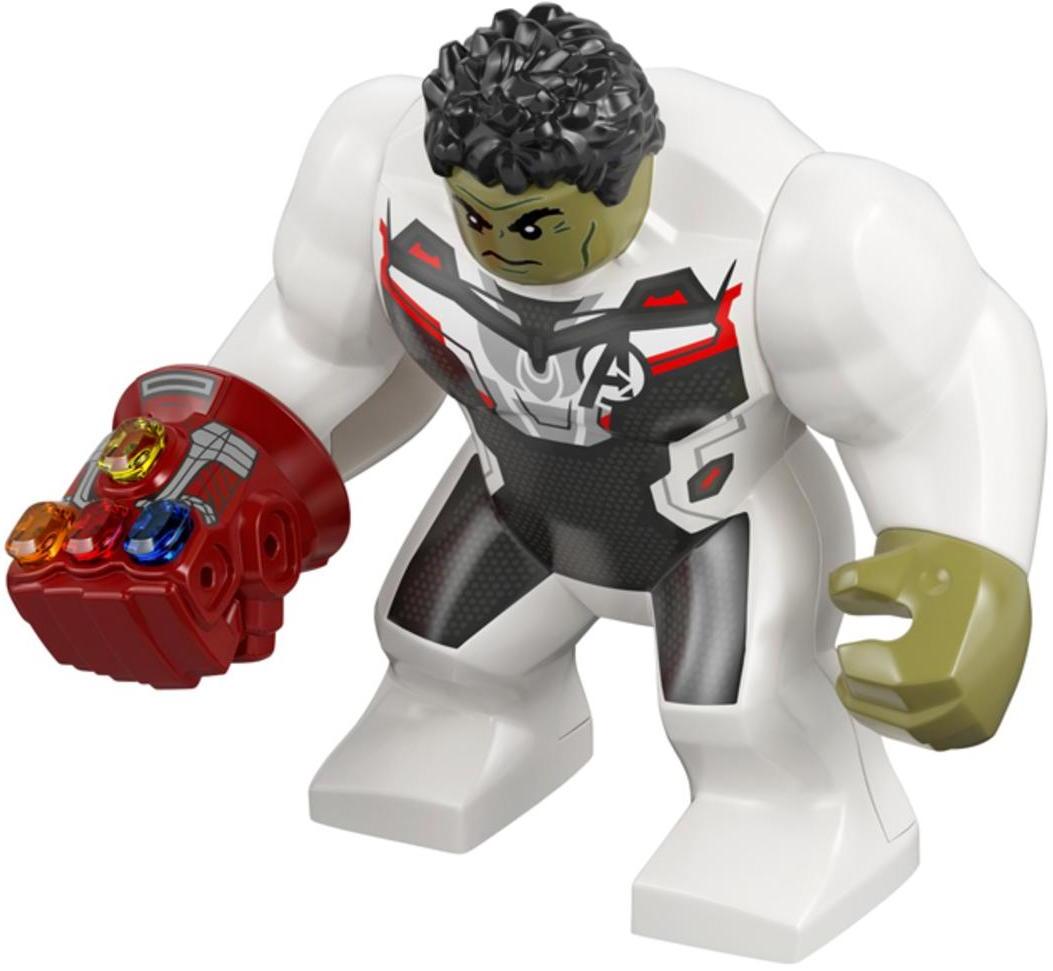 However, the star of the show is of course the Stark Gauntlet itself. The set actually includes a whopping four Infinity Stones – Space, Reality, Soul, and Mind – while the other two come in 76131 Avengers Compound Battle, meaning you can just buy these two sets to get a full gauntlet. 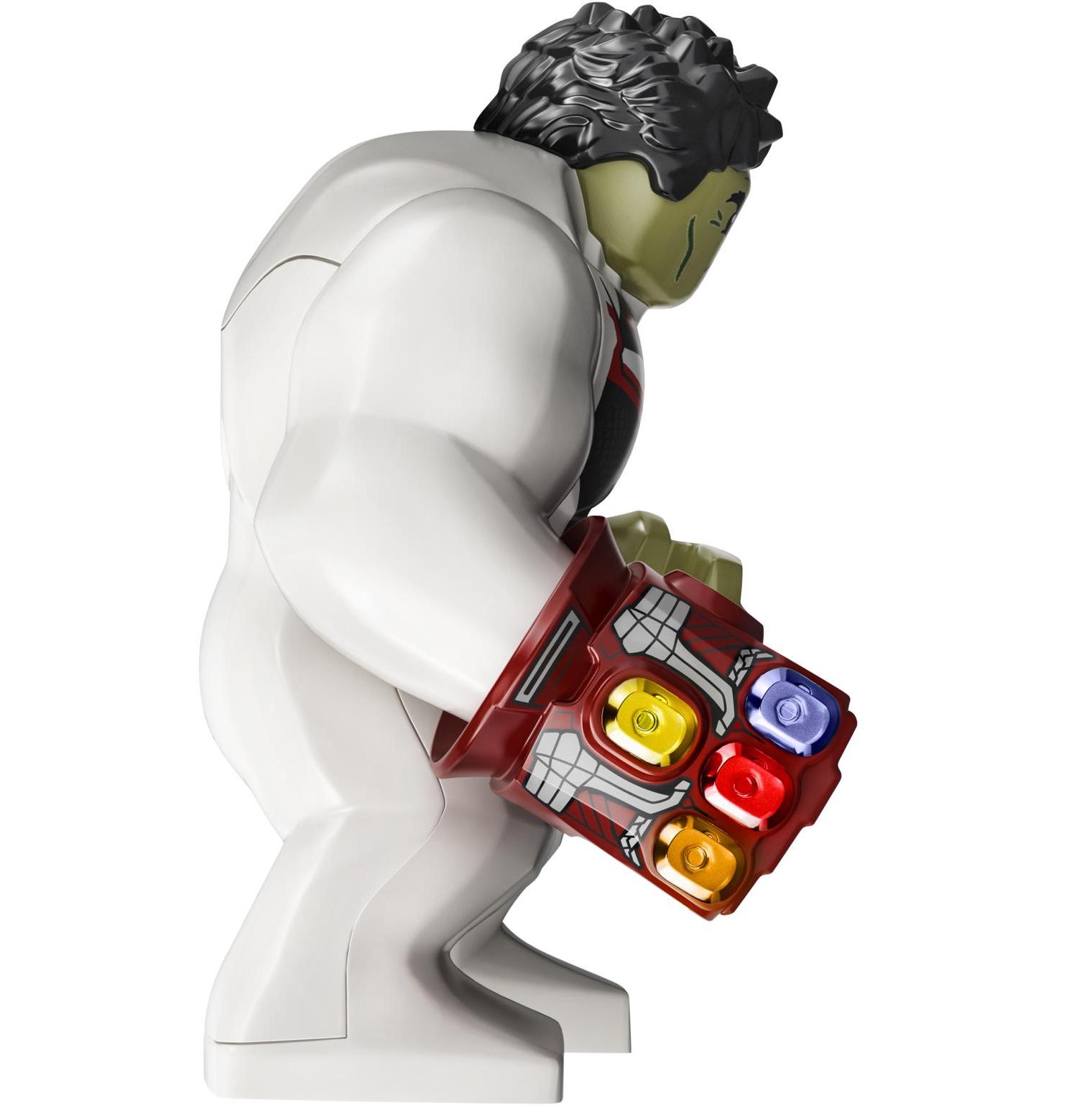 The Stark Gauntlet is a mirrored version of the left-handed Thanos Infinity Gauntlet, and is worn on the right hand (just like in the movie). It even is printed with grey and black designs to give it an accurate tech-like design! I love it and it’s the biggest draw of the set for me. 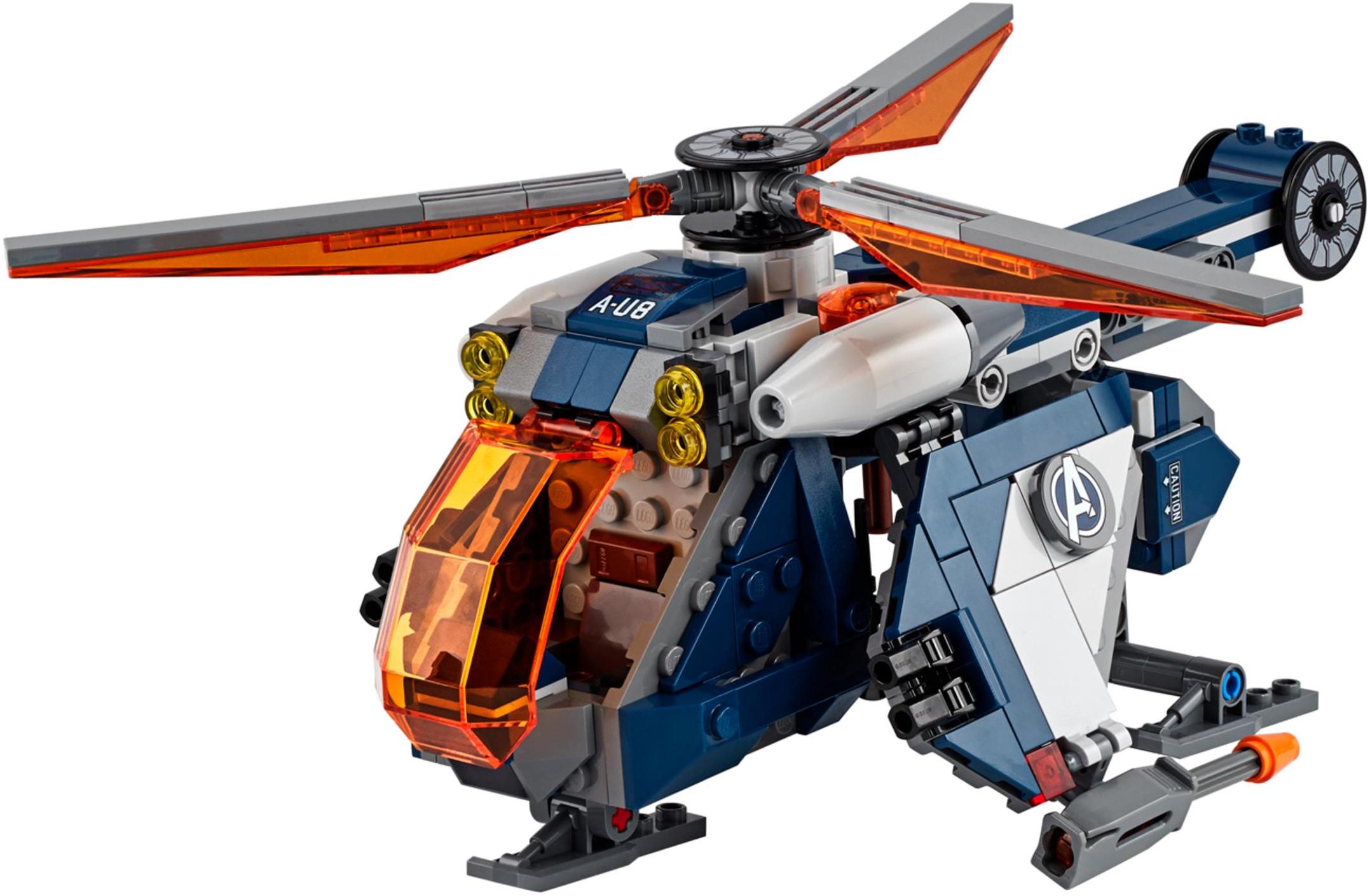 Now, on to the builds of the set, the first of which is this helicopter. Now, I don’t want to be negative, but why is this a thing? We already got a weird helicopter in 76131 Avengers Compound Battle, so why does LEGO feel the need to make a bigger, more expensive unnecessary helicopter? 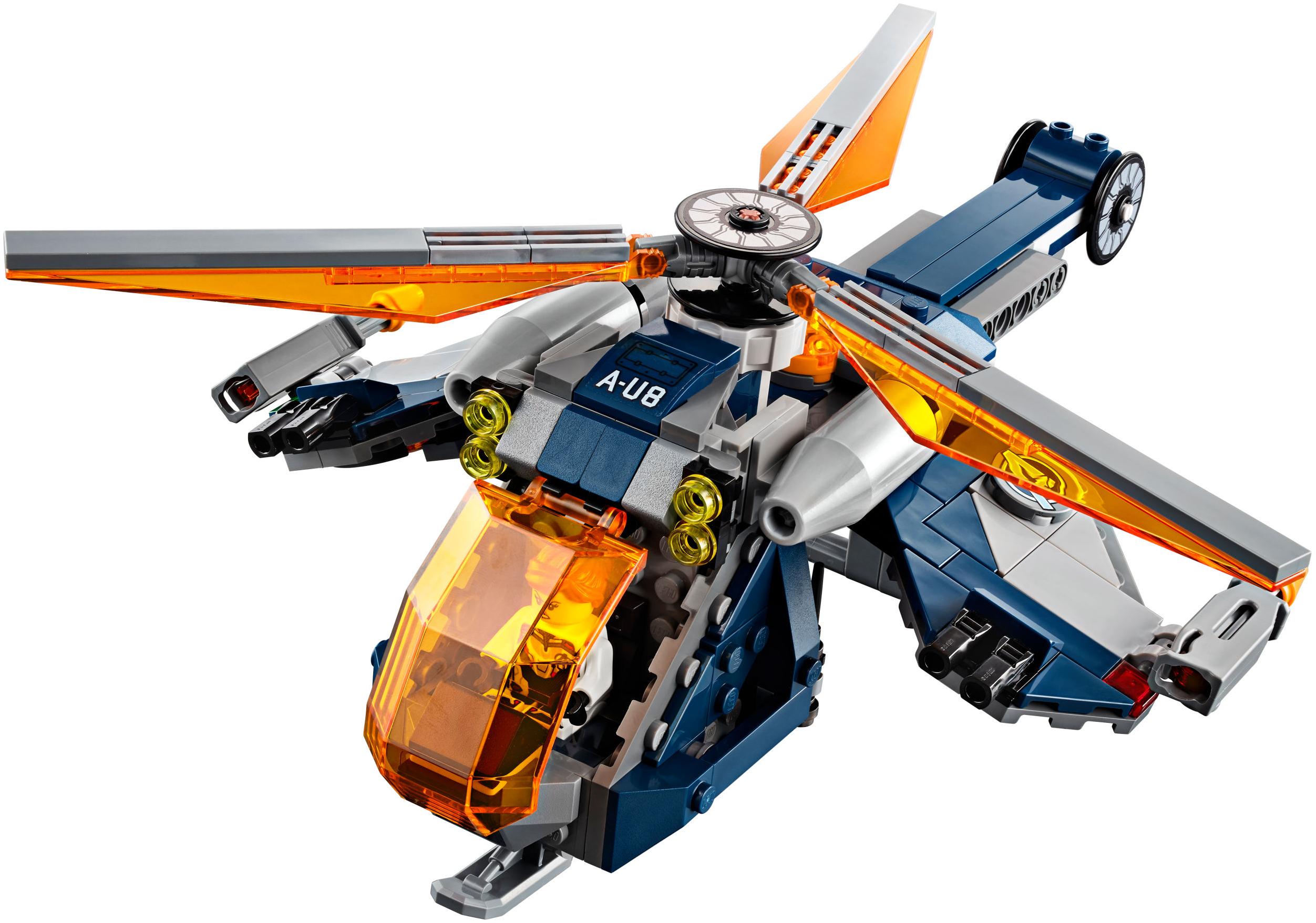 The color scheme of the helicopter is also pretty bad, in my opinion. The light grey, dark blue, white, and translucent orange combination screams “Nexo Knights” and it’s not a good look for an Avengers vehicle. 76126 Avengers Ultimate Quinjet pulled off translucent orange cockpits but it had a much darker color scheme that didn’t look as ridiculous. The three translucent orange propellers on the top of the helicopter look terrible as well. There are two hinged wings on the sides of the copter – these have nice brick-built designs but the color scheme is again wrong and the overall design looks strange and stubby. The build as a whole just looks like a bootleg unlicensed Avengers toy and not an official licensed LEGO set simply because of the strange color scheme and complete lack of corresponding source material. 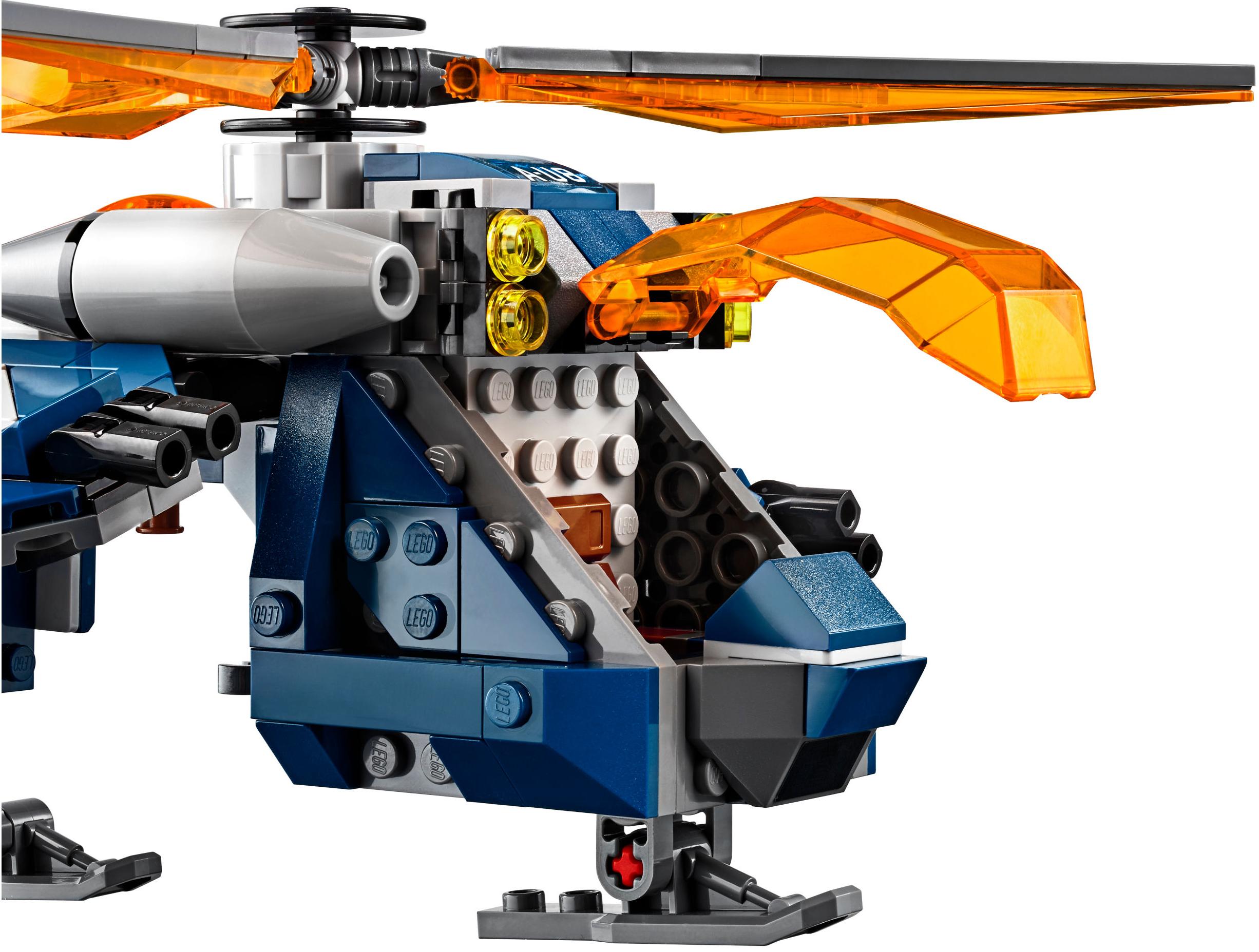 The cockpit glass is a translucent orange helicopter cockpit piece. It hinges up and there’s a seat for Black Widow inside; the seat is, however, pretty bare. Furthermore, the shaping around the cockpit unfortunately causes a lot of gaps, even when the cockpit is closed. 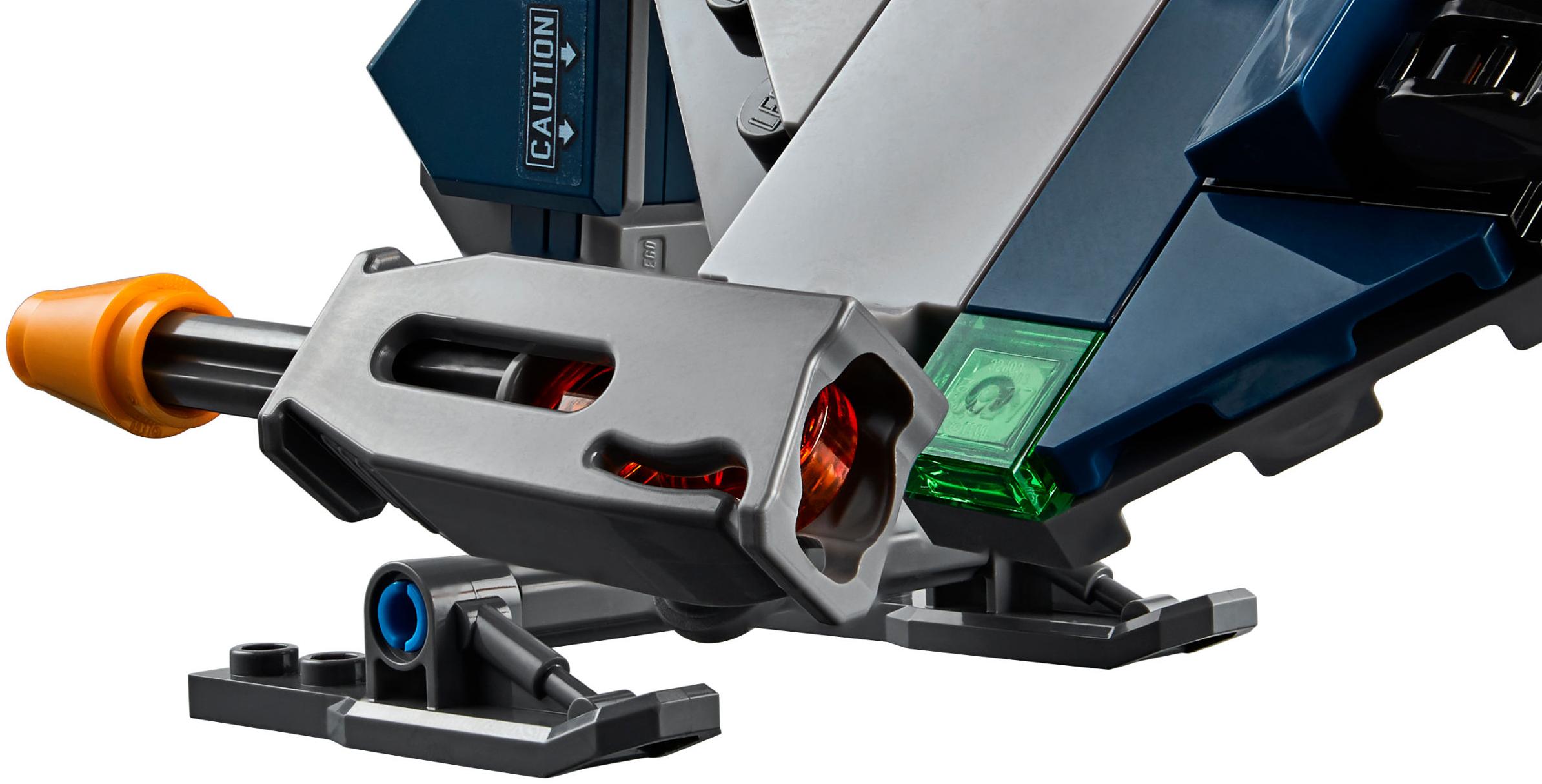 The wings of the helicopter have one of the new tile shooters at each tip. This piece was introduced for the LEGO firefighter theme and has been reused here. There are three translucent orange tiles in each shooter and you can fire them off one by one or in quick succession.

There’s a light grey crate included to hold any extra ammunition. The crate can be attached to the helicopter. 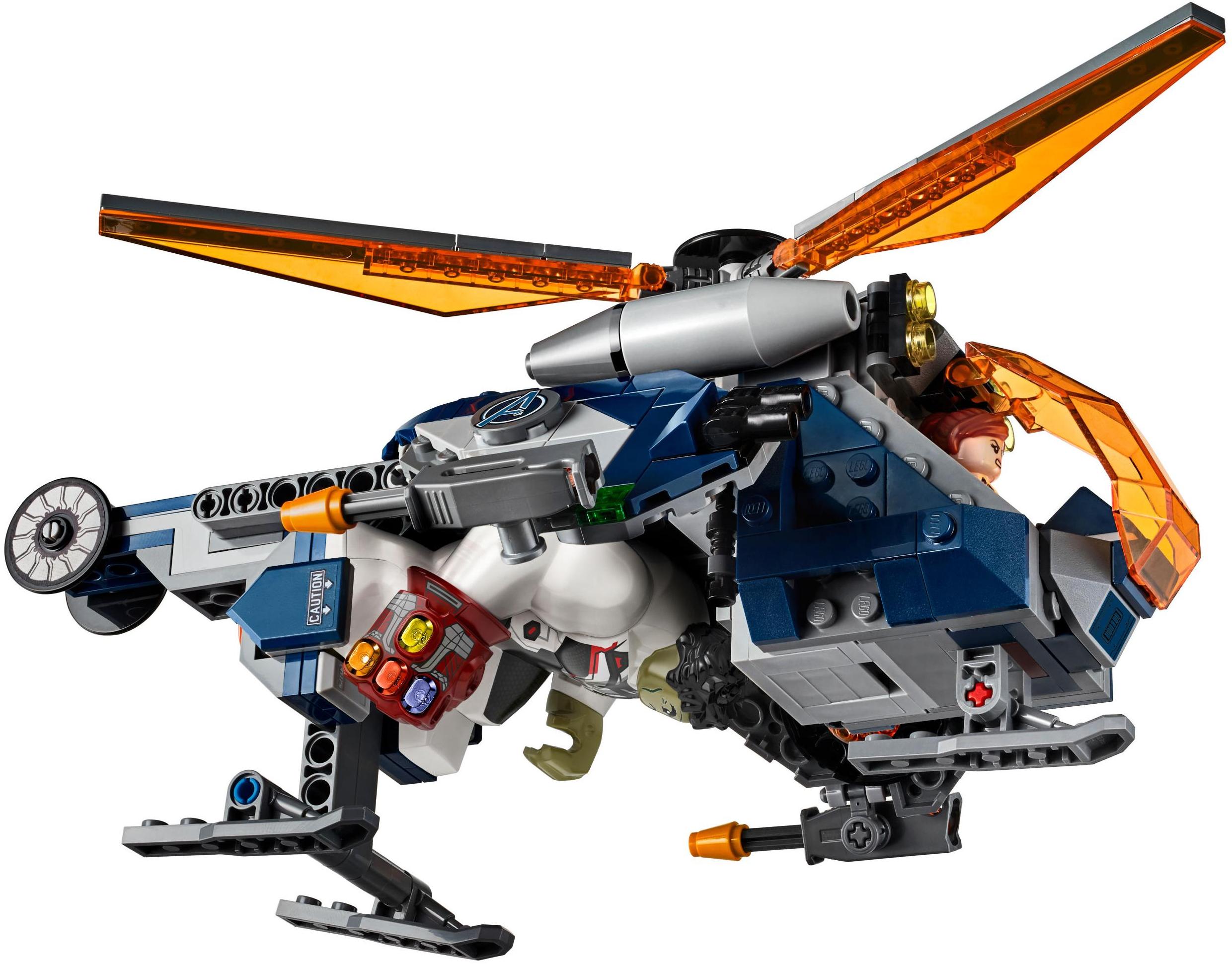 As this set is called the “Hulk Drop Helicopter”, the main play feature of the helicopter is to – you guessed it – drop the Hulk. Hulk can be attached to the bottom of the ship and there’s a button on top that will cause him to drop down – a play feature reminiscent of the Bruce Banner-launching one in 76084 The Ultimate Battle for Asgard. 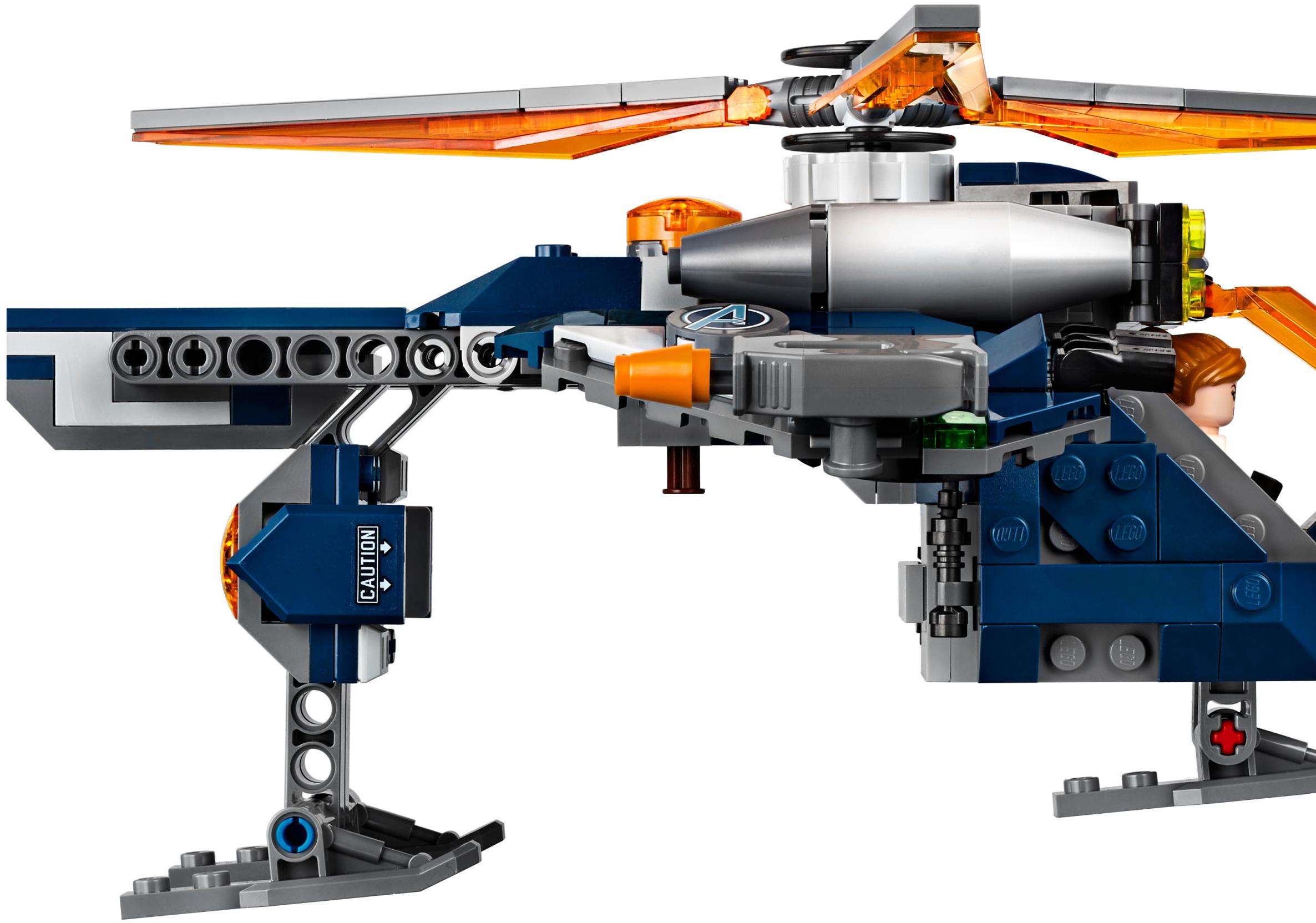 However, once the Hulk has been launched, the helicopter looks very empty in the body section which is pretty disappointing and not really worth it just for one play feature. 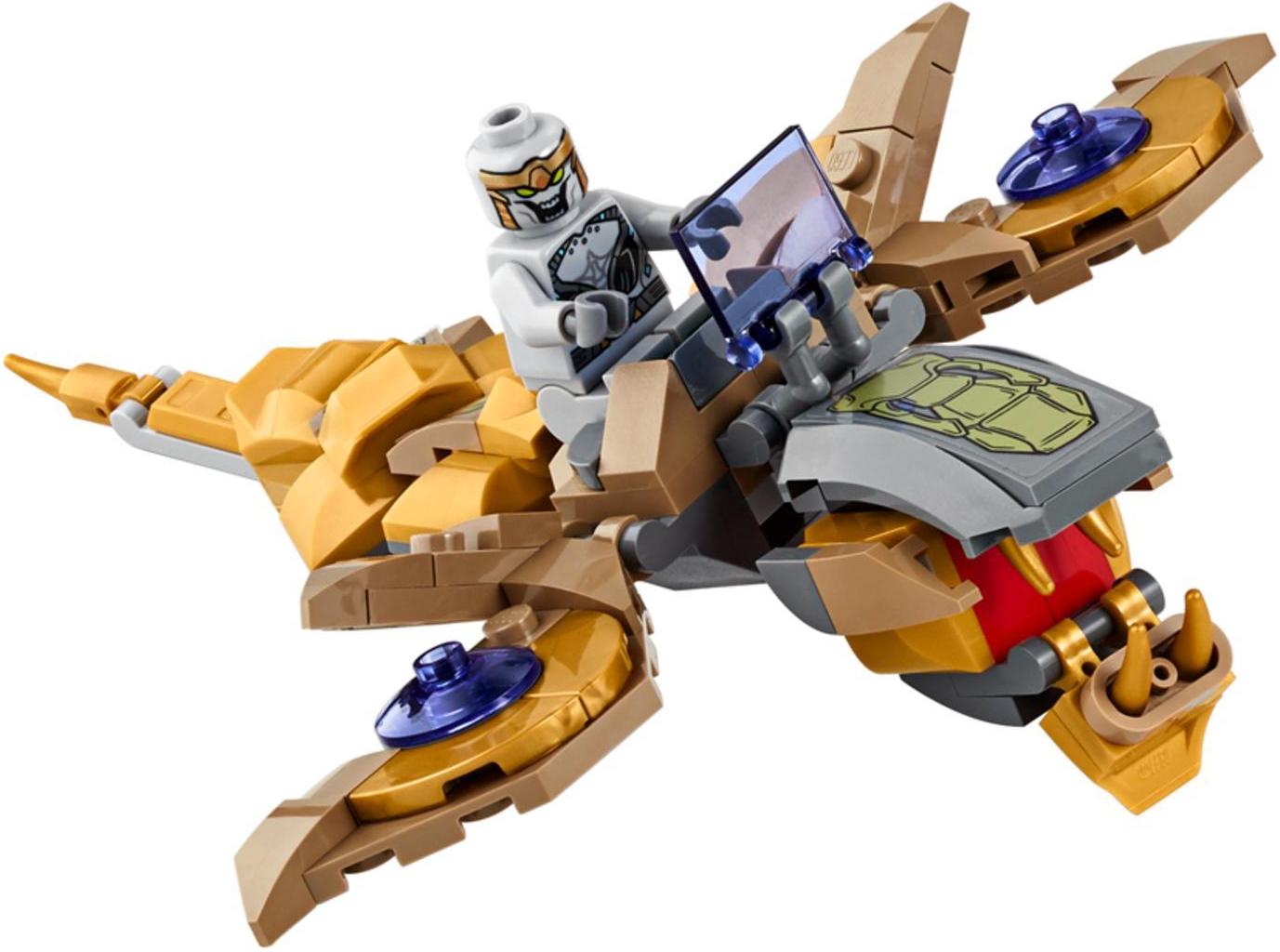 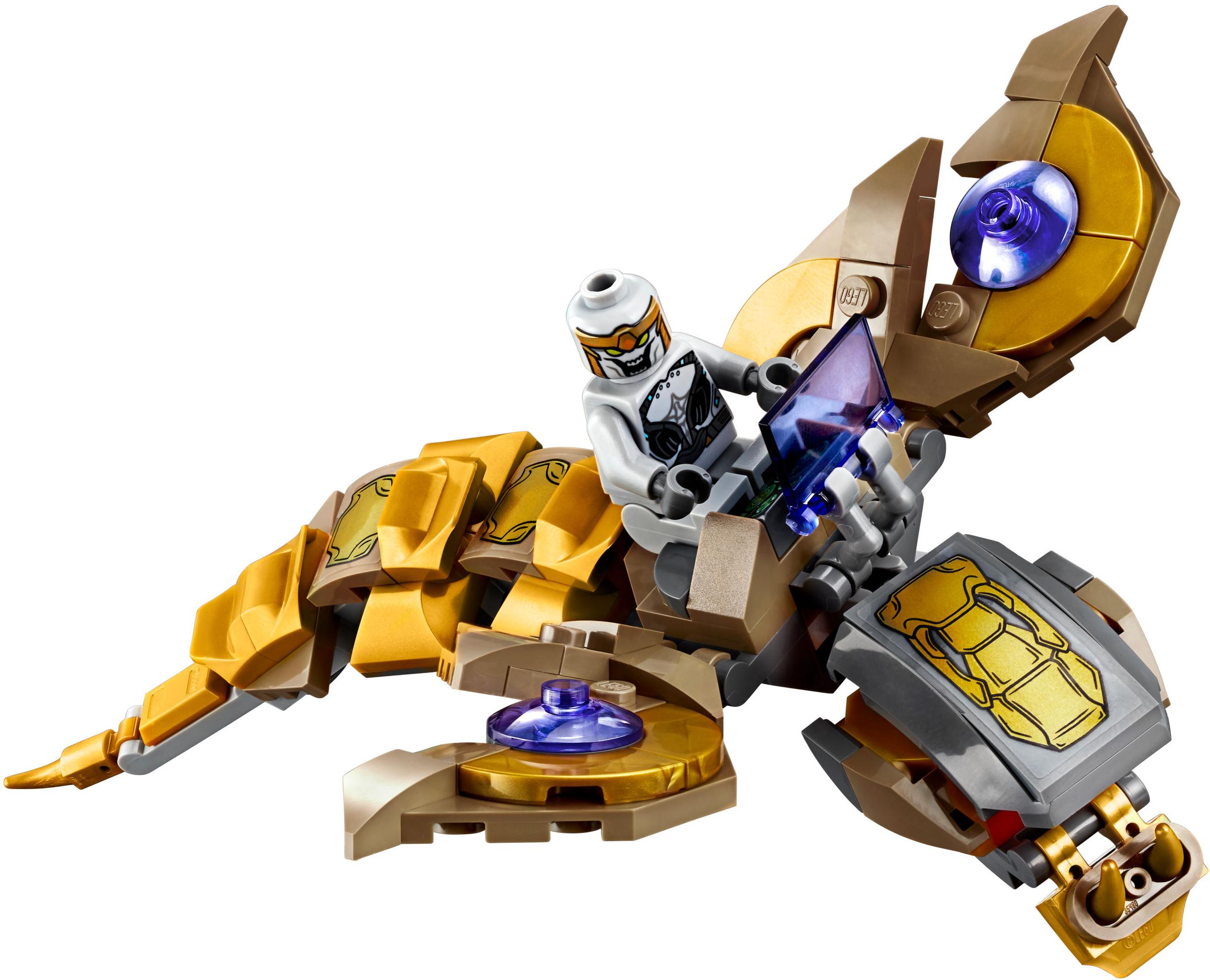 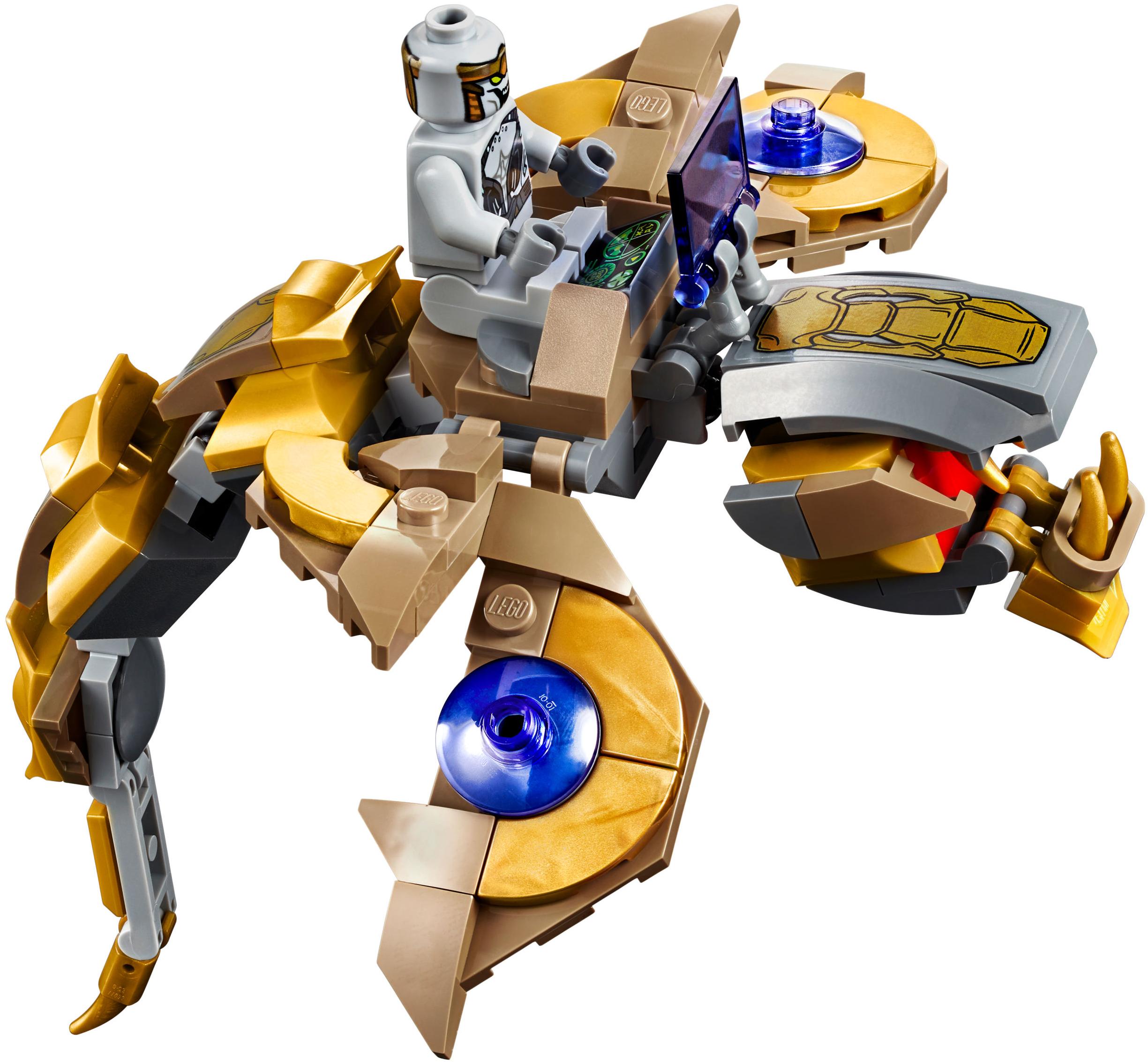 I mean, I kind of get what LEGO was going for here, but it really doesn’t work in my opinion. The defining feature of the Chitauri Leviathan is its massive size, and this does not reflect that in the slightest. It looks more like a mini Ninjago dragon than anything as hefty and gigantic as a Chitauri Leviathan. If you ask me, I would’ve preferred a Chitauri Leviathan to be a much larger main build, and for the helicopter to have been left out altogether. 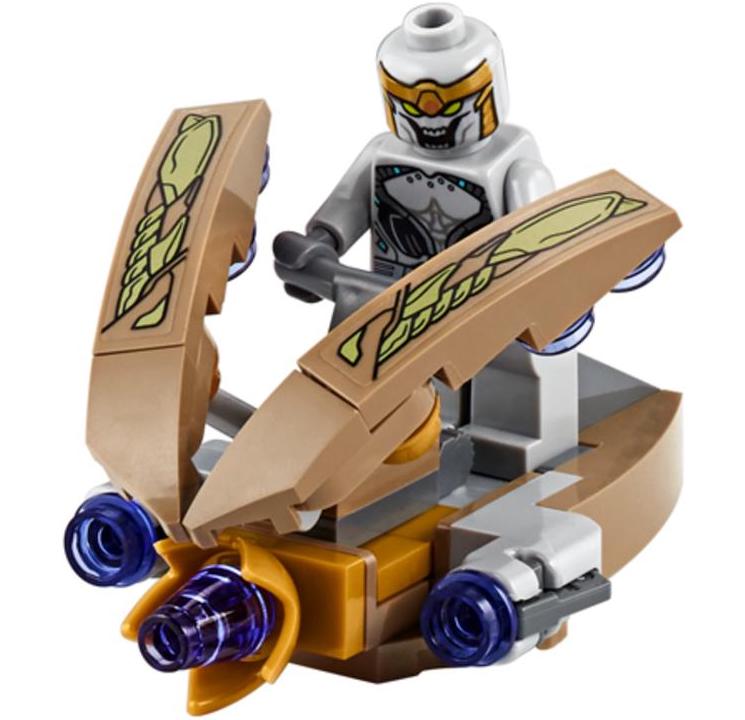 The final build in the set is the Chitauri chariot. I’ve seen many criticise it but this is surprisingly my favorite build in the set. It’s small but I think it works, and is about the right size in comparison to the movie variant. 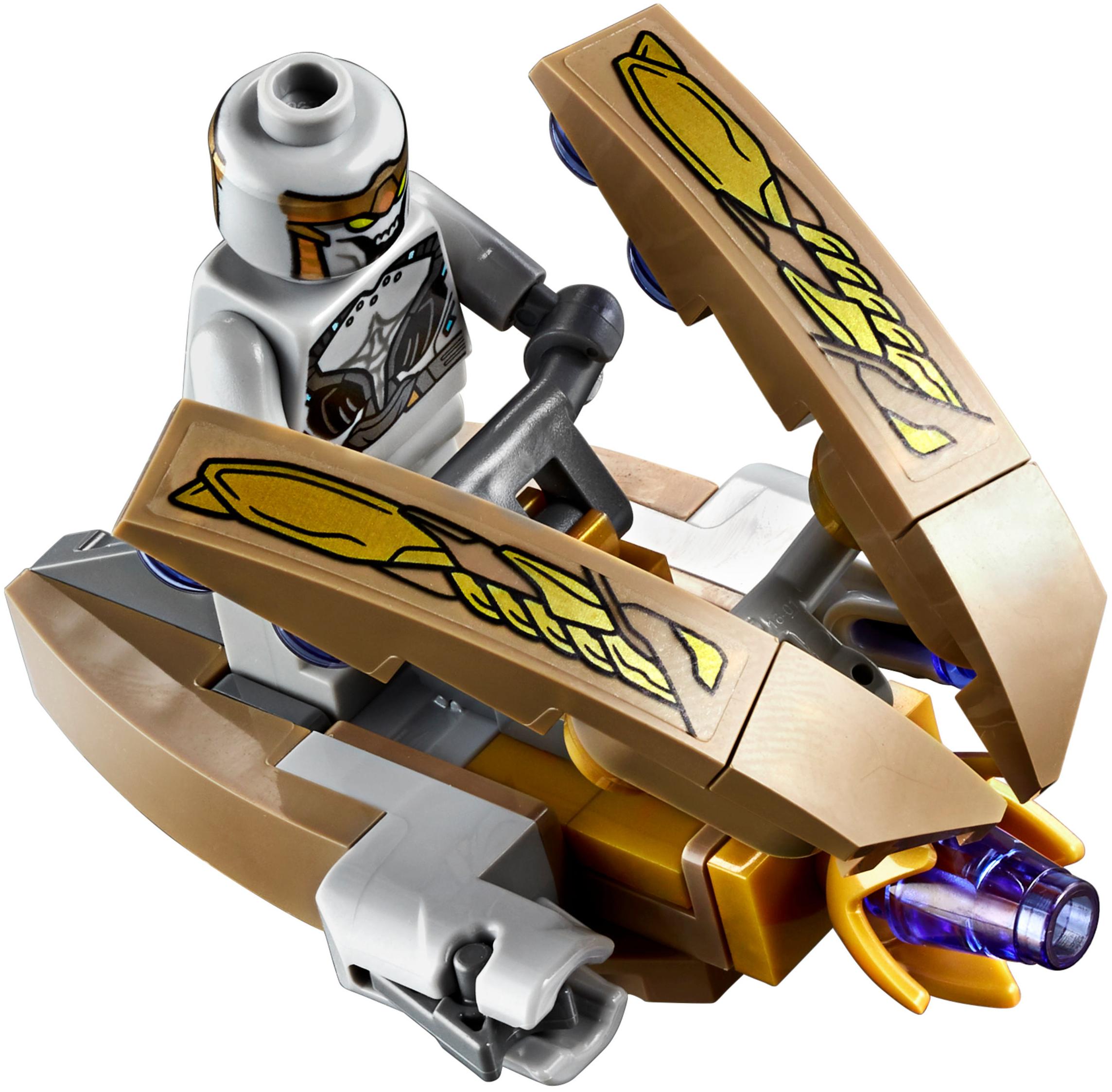 The double-pronged front was a defining feature of the Chitauri chariot which the 2012 LEGO ones did not have, and I’m pleased to see it replicated here. A Chitauri minifigure can stand and hold on to the handlebars which I think works well. 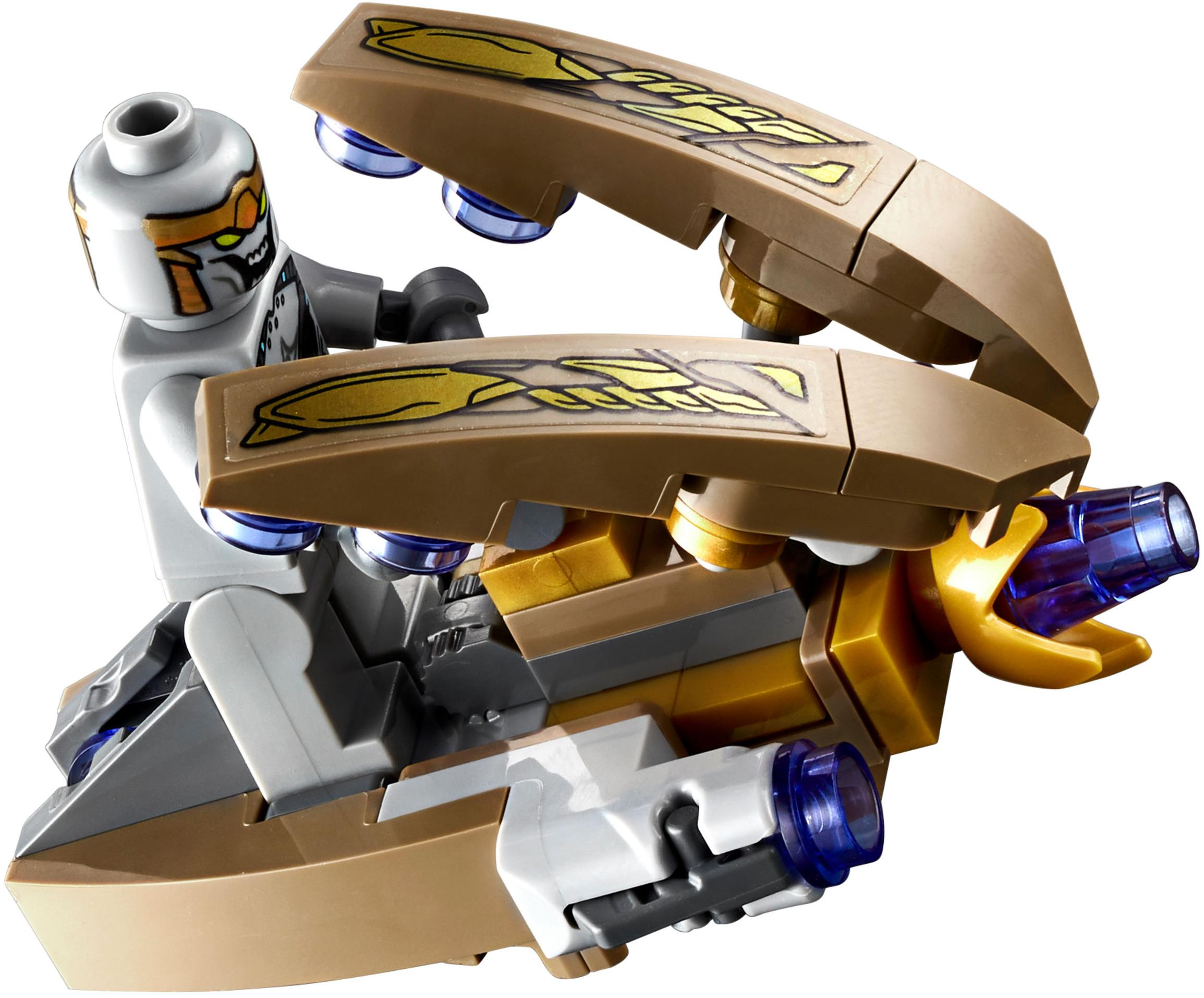 There are a pair of stud shooters on the sides and the middle has a brick-built mini cannon. This is built from Queen Watevra Wa’Nabi’s crown from 70824 Introducing Queen Watevra Wa’Nabi with a translucent purple cone on the end and it looks really good! I also applaud the accurate sloped shaping at the back of the speeder, which looks fantastic as well.

So, as a whole – I am very very excited that LEGO is making more Avengers Endgame sets, and if the rumors for 4 more Avengers sets are true I hope they are all Endgame-related.

However, this set is a very mixed bag to me. Quantum Realm Hulk, Rescue, and the Stark Gauntlet are absolutely incredible and the small Chitauri chariot is not bad to me. However, Black Widow’s inclusion is a wasted slot that should have gone to someone like Ronin, and the two main builds of the set are, in my honest opinion, completely superfluous. Furthermore, $59.99 USD is definitely way too much – the helicopter, Leviathan, and Chitauri chariot are pretty small and even with the new Hulk included I don’t feel the price is justified at all.