Hey everyone! Today I have a review of the new LEGO Ninjago Minifigure pack! This minifigure pack is one of four packs released this wave, but has caused a lot of excitement among the LEGO community because it includes the first official Clutch Powers minifigure! Anyway, this set includes four minifigures and retails for £10.99 (UK), $12.99 (U.S.), $19.99 (Aus), and $22.99 (NZ). Let’s check it out! 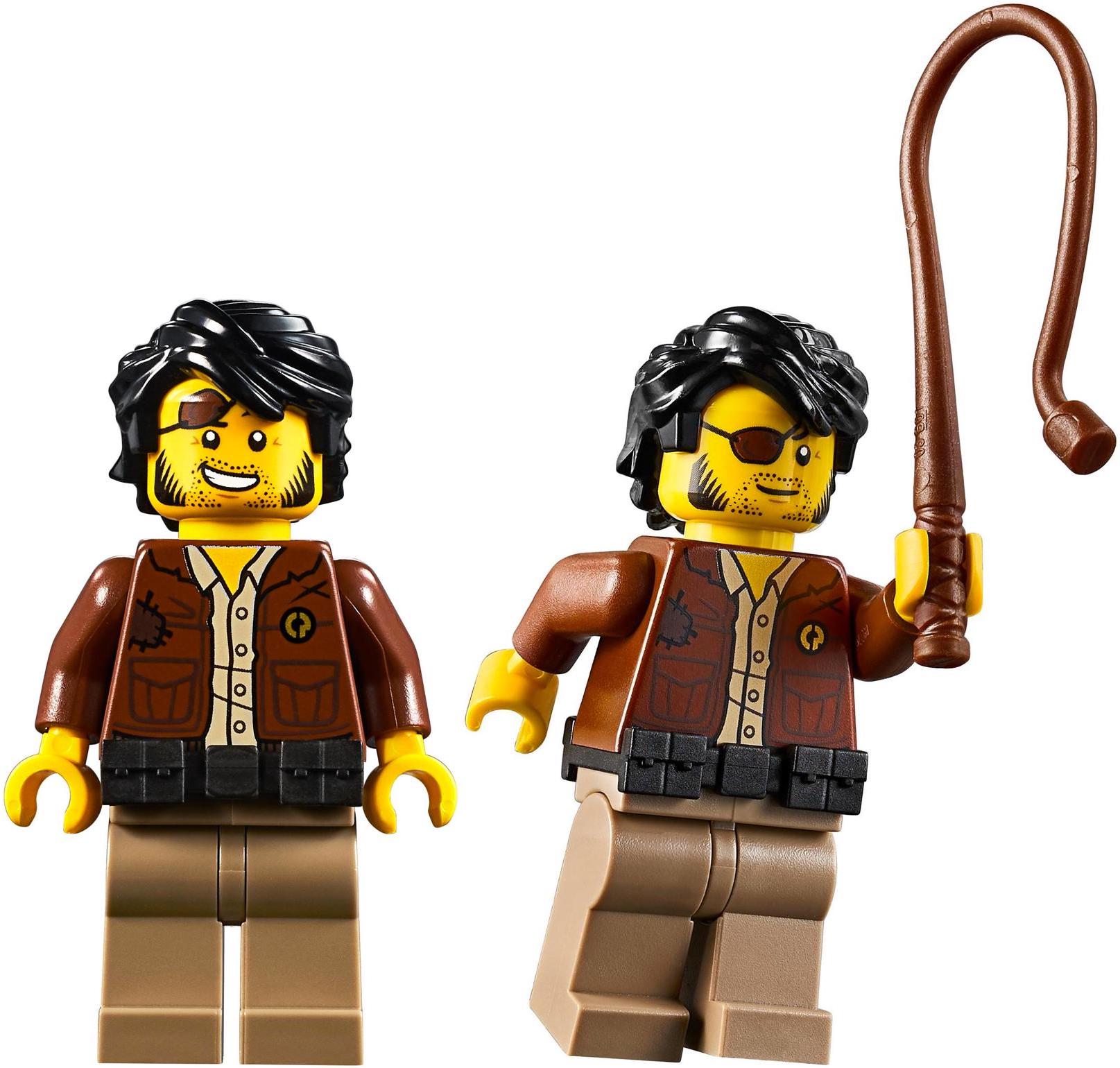 The first minifigure is, of course, the one who has excited the LEGO community: Clutch Powers himself! This character appeared in The Adventures of Clutch Powers, a 2010 LEGO animated mini movie. He has a tousled black hairpiece which looks great, and has a new double-sided head. One side shows his default expression – a brown eyepatch, a confident smile, and facial hair – while the other side has a more comical expression with an embarrassed smile and his eyepatch flipped up to reveal his other eye is perfectly fine. He has a brown adventurer jacket and a black utility black piece (introduced for the LEGO Batman Movie theme), and his unprinted legs look rather plain in comparison. His accessory is a brown whip. 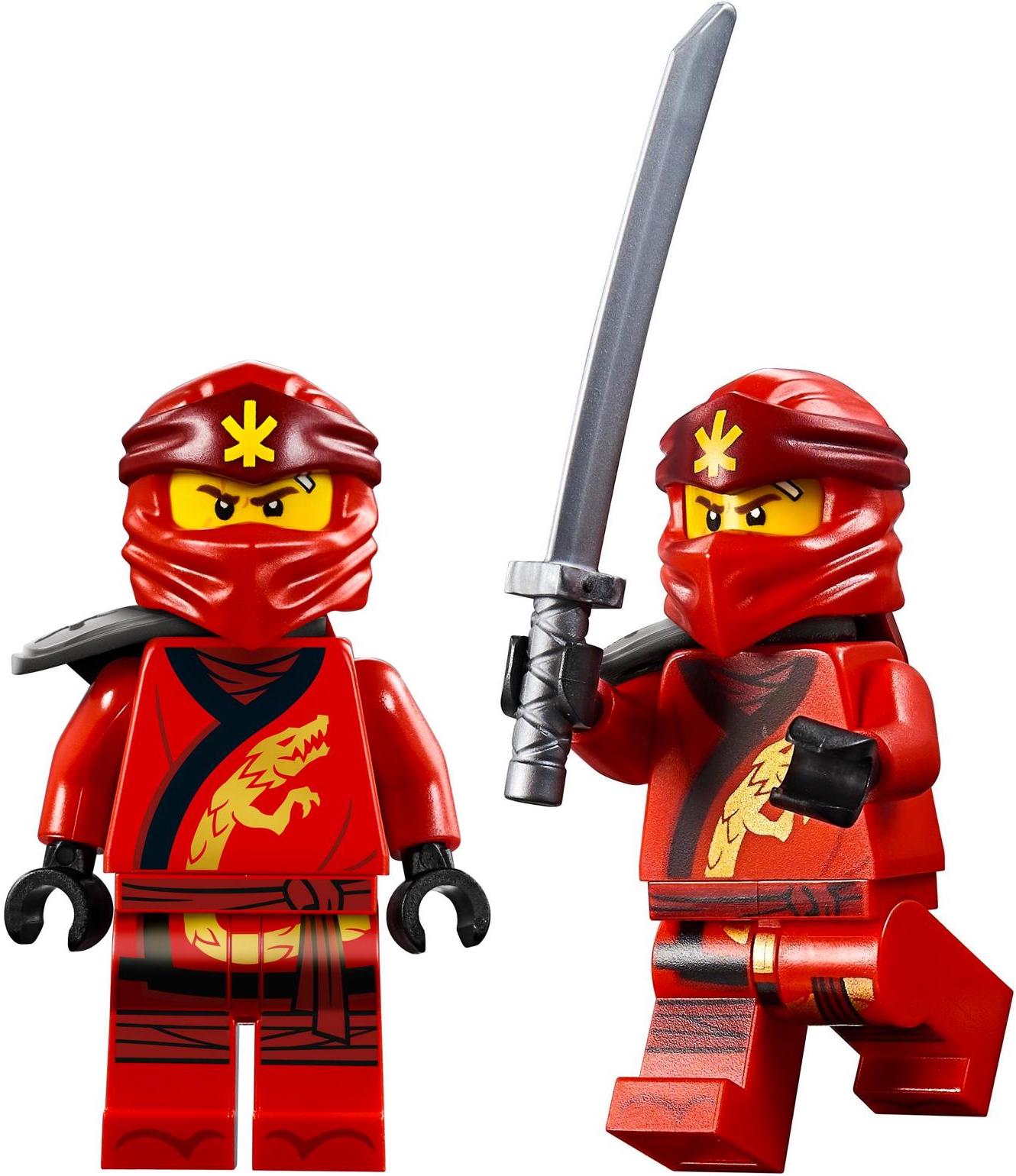 The second minifigure in the set is Kai. Oddly enough, he wears his Legacy suit which means that his suit is outdated. He should be wearing the suit for the new season but LEGO chose to use this older suit for some strange reason… maybe they had leftover stock? Anyway, he has printing on his cowl, torso, and legs, along with his regular double-sided head. He has the new shoulder pad piece introduced in 2019 in gunmetal grey, and comes with a silver katana that can be sheathed on his back. 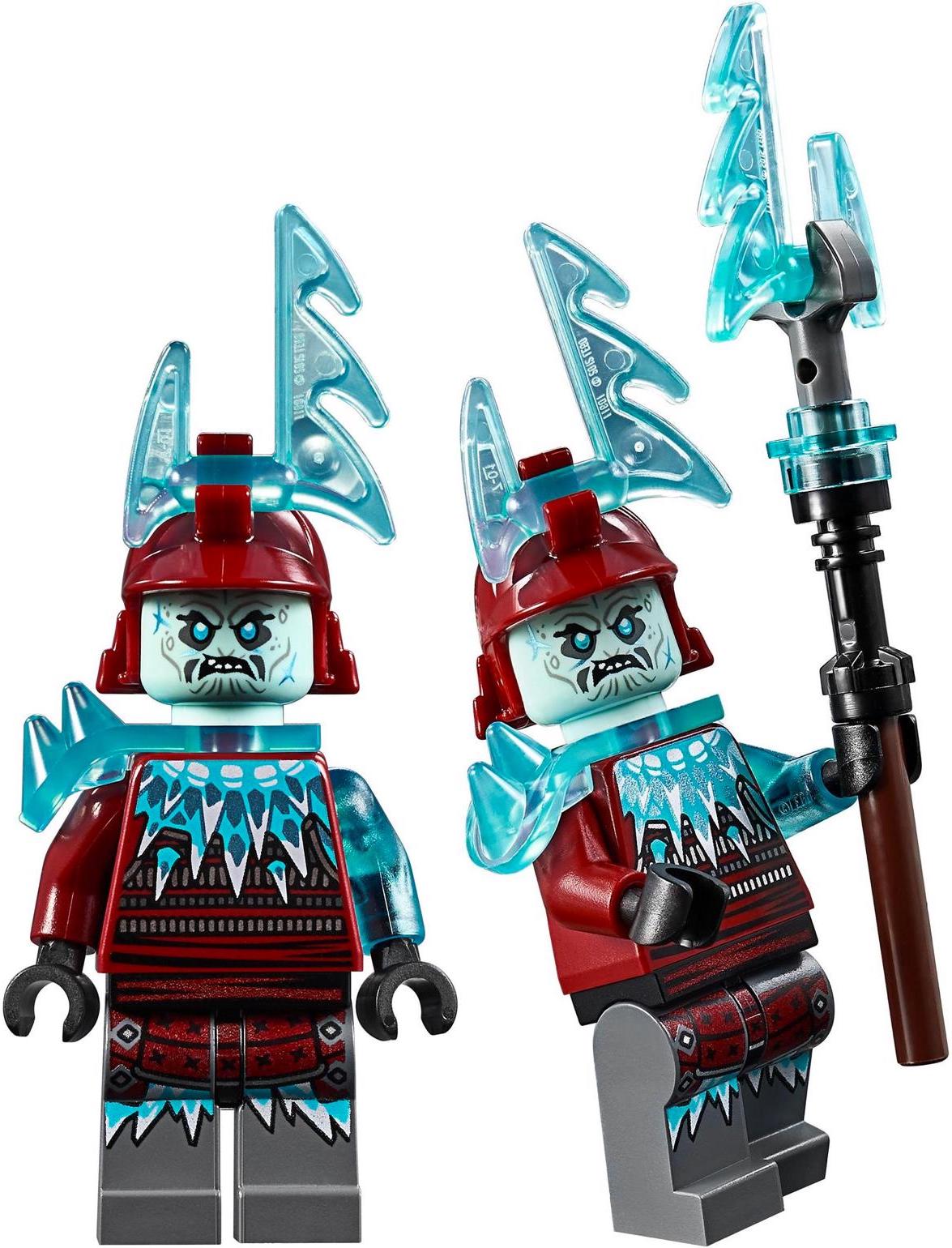 The third minifigure is officially called a “Blizzard Archer” by LEGO, but it has no bow or arrow so it’s really just a generic Blizzard Warrior. This is one of the generic villains from the current season’s ice and fire villains, falling on the ice side. He has a dark red samurai helmet with a translucent light blue ice spike clipped on top, along with a double-sided head with nasty expressions printed. The Blizzard Warrior has a translucent light blue shoulderpad with a pair of spikes, along with icy torso and leg printing. I like that the minifigure’s left arm is translucent light blue for more icy details. However, I am disappointed that none of the new dual-molded helmet and armor pieces introduced in this Ninjago wave were used here. The Blizzard Warrior has a brick-built staff. 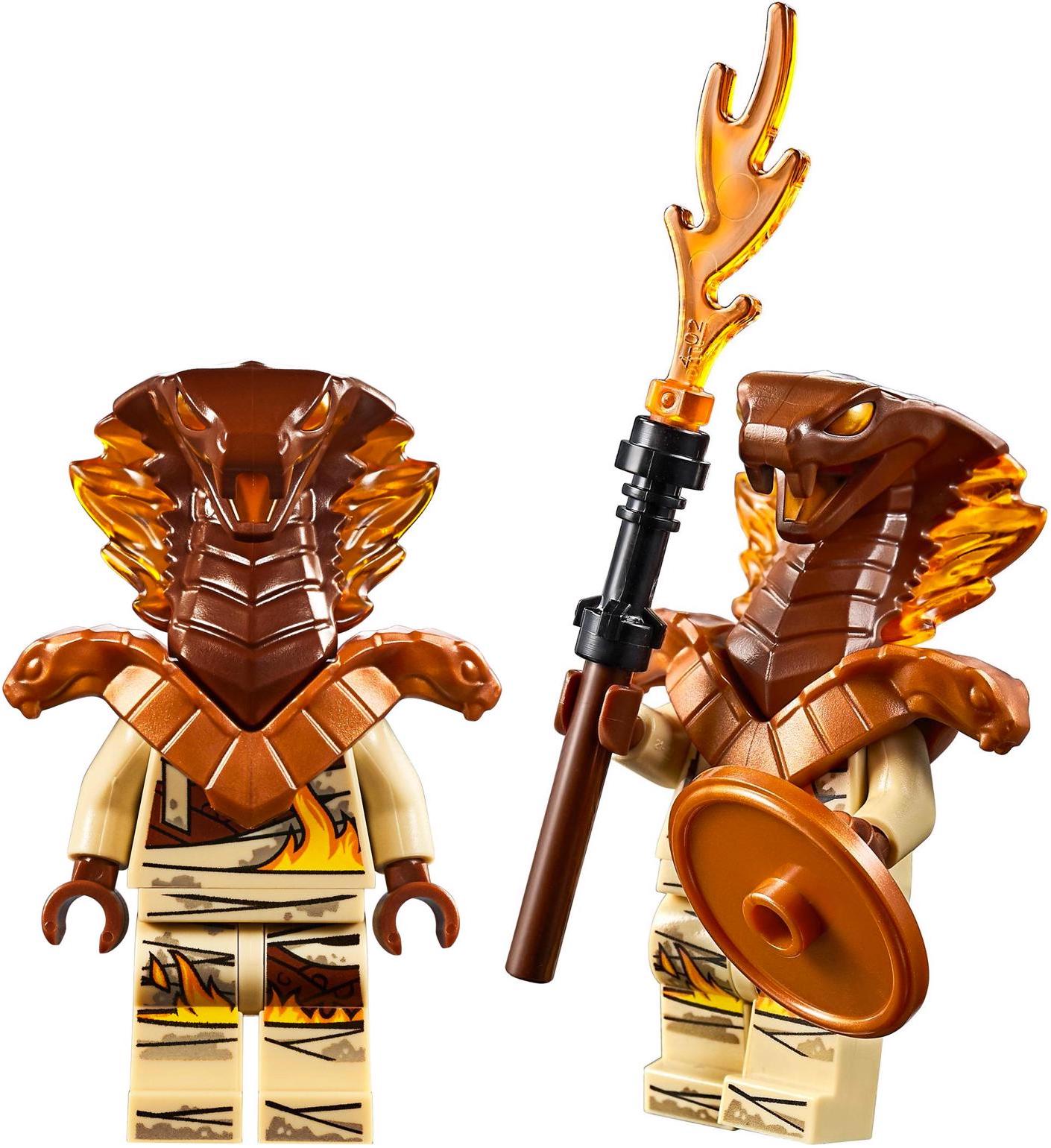 The final minifigure in the set is a Pyro Snake, the fire-themed villain from this latest season. This minifigure is generic but it’s an alright disposable grunt/army builder, and it looks pretty good anyway. The head is dual-molded, with a brown base but trans orange eyes and flames (which looks great). The Pyro Snake has a copper-colored snake armor piece, along with tan torso and legs. The body is printed with Egyptian mummy-like wraps and has some flaming details. The Pyro Snake is armed with a copper shield and a brick-built torch staff.

On the whole, the minifigure selection is undoubtedly the biggest draw in the set. Clutch Powers is obviously the best minifigure for longtime LEGO fans who appreciate such easter eggs, but the Kai minifigure is decent and the two generic villains included are fairly solid. 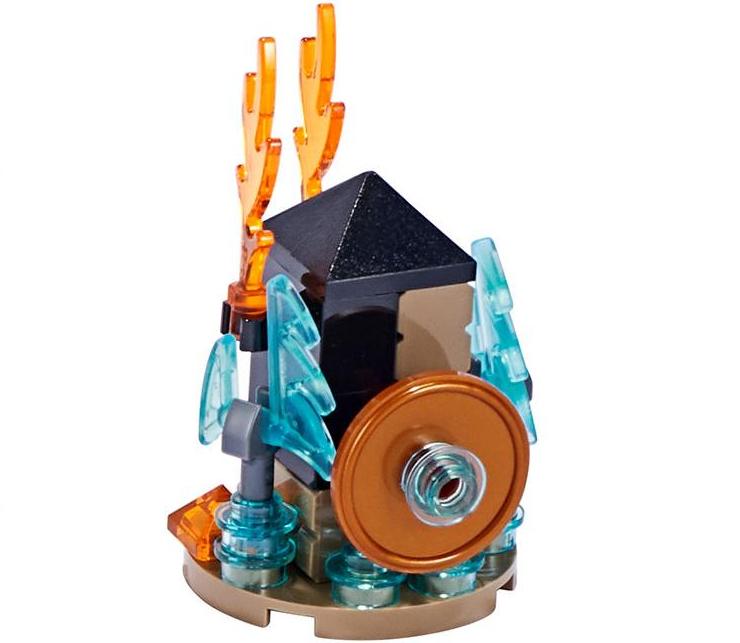 Now, the minifigure pack includes one very small side build to justify the price a bit more. It’s really nothing special but it is meant to be a small weapons rack. 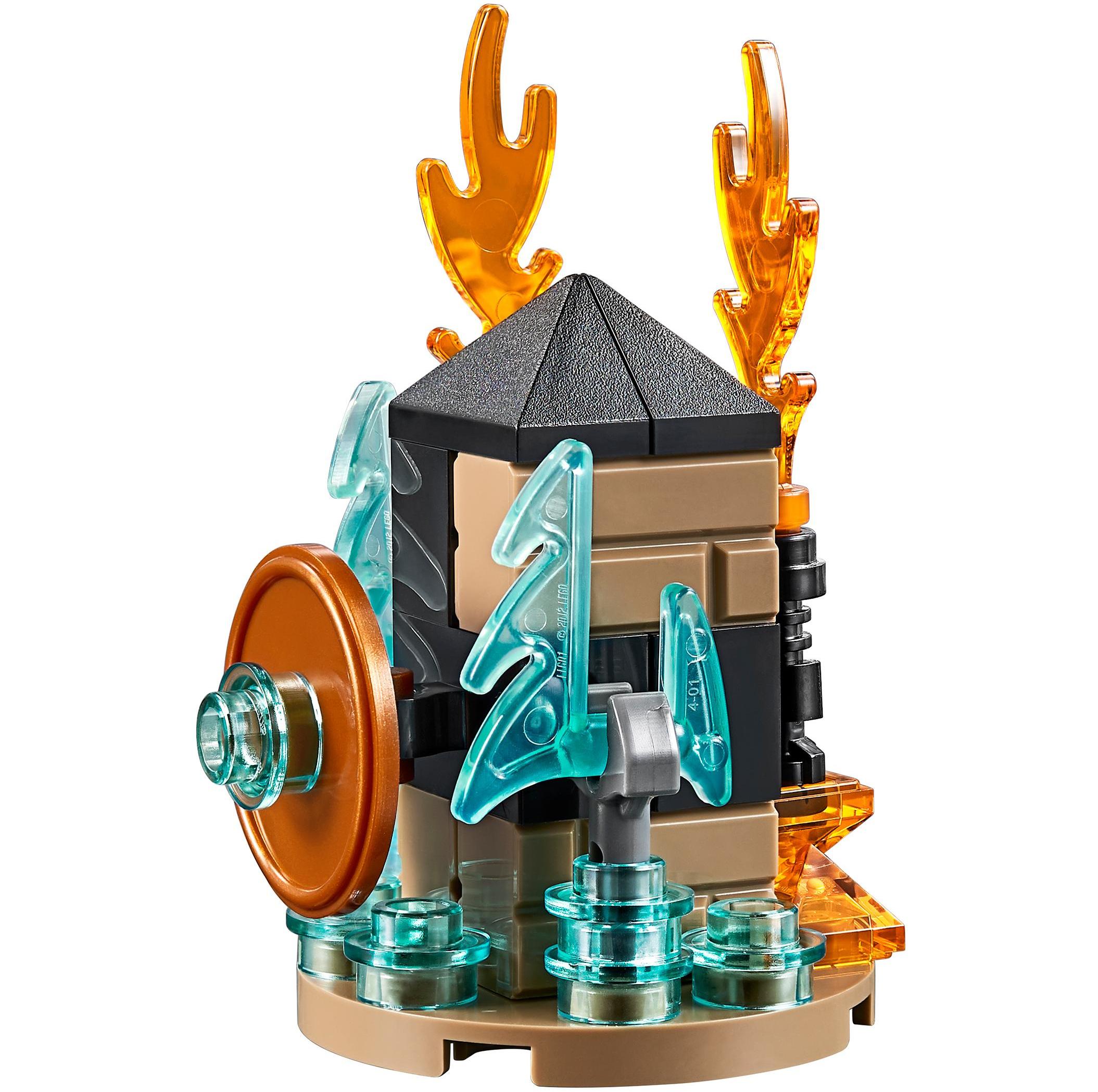 There’s a dark tan round base with a brick-built pillar in the middle. Half of the build is fire-themed while the other half is ice-themed. One side has a detachable torch and a flame, while the other side has two jagged icicles and a copper shield. It’s a bit odd that the copper shield – normally used on the fiery Pyro Snakes – is on the icy side, but whatever. The icicles and torch can be detached and used as weapons. 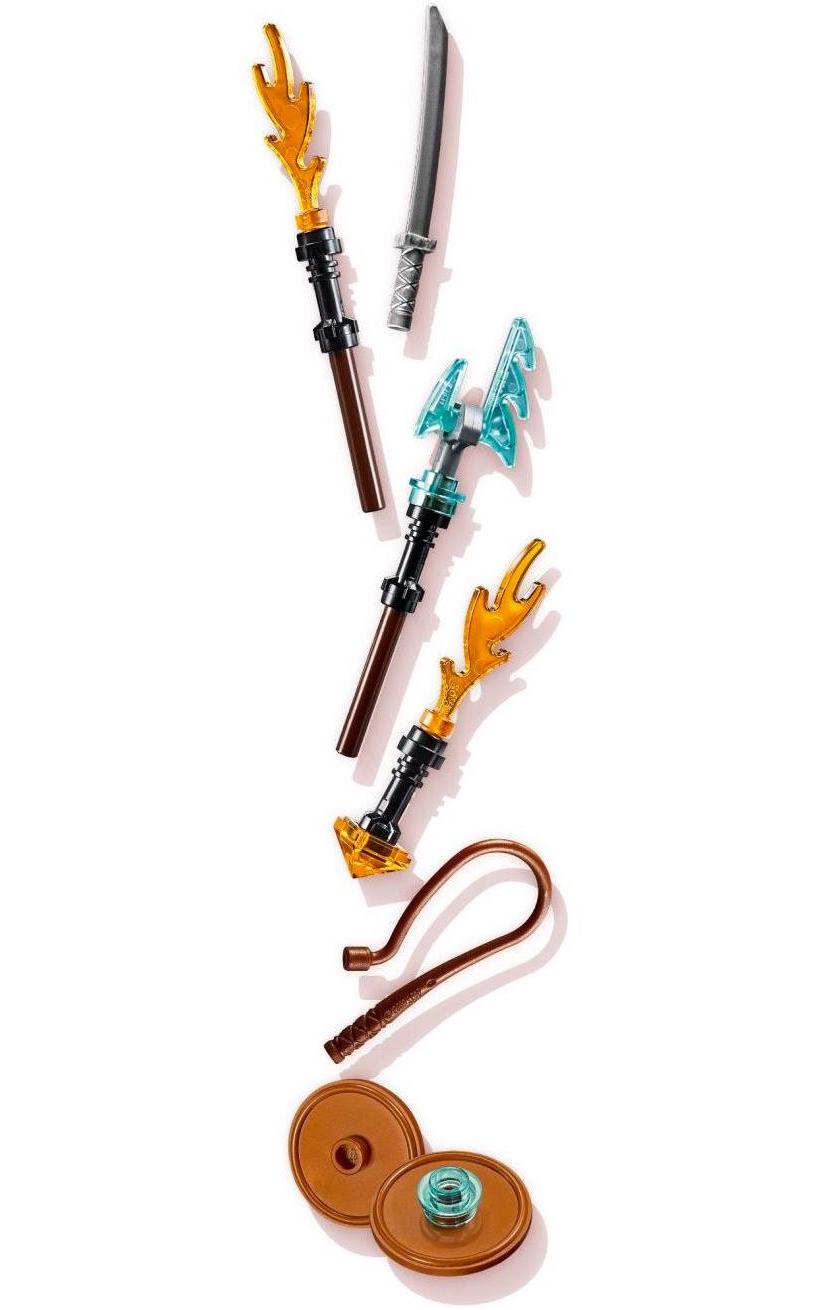 Counting the ones from the accessory stand, here are all the minifigure accessories officially included in the pack.

On the whole, this LEGO Ninjago minifigure pack is pretty good. I like the four minifigures included, especially Clutch Powers (who will be a big draw for LEGO fans). The build itself is just whatever but it’s not meant to be the main star. Playability is never really a strong suit of these sets but it’s good to have two protagonists and two antagonists. I think the price of this set is actually really fair – four minifigures and a small build for $13 USD and £11 GBP is quite good, especially in comparison to 40343 Spider-Man and the Museum Break-In.

Thank you for reading! Let me know your thoughts in the comments section down below! 🙂